The day started out wet, gray, and dark yesterday, but then turned fairly nice in the afternoon. It was even a little bit warm. It didn't really matter to me. I'd already set my sites on sewing, and I was ready to finish off the last fringe on the tablecloth for the Taco block. The first step was to sew on the borders. 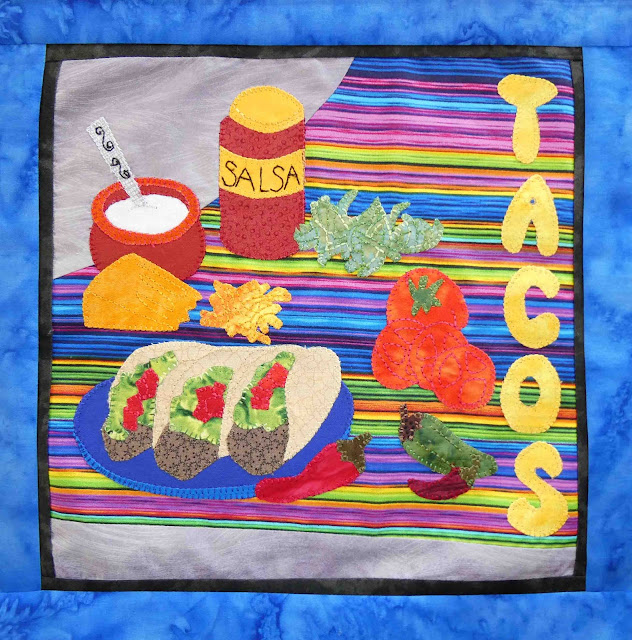 And then, I settled into a comfy chair to stitch on the fringe. What a painus in the anus, but it is done! And this is the last fringy fringe I'll have to do for this quilt. 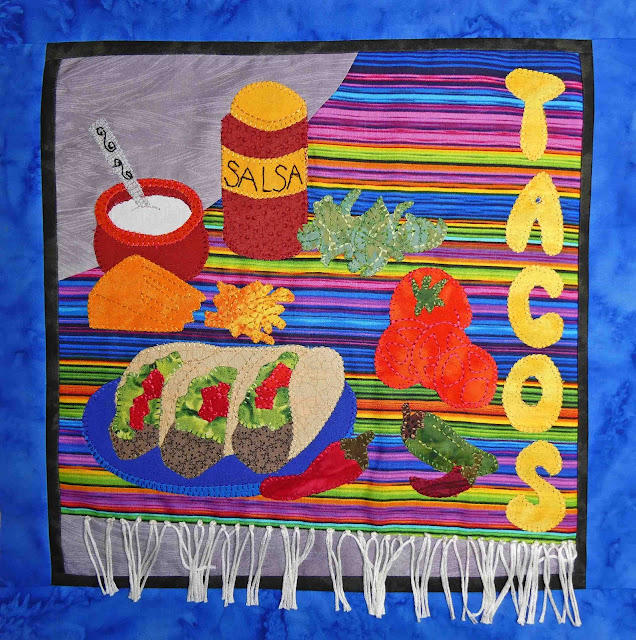 Completing this quilt block was my goal for May's

and so I'll link up there when the party starts at the end of the month.
There is still one more block to make before I'm ready to sew this into a flimsy. Here are all the blocks I have so far: 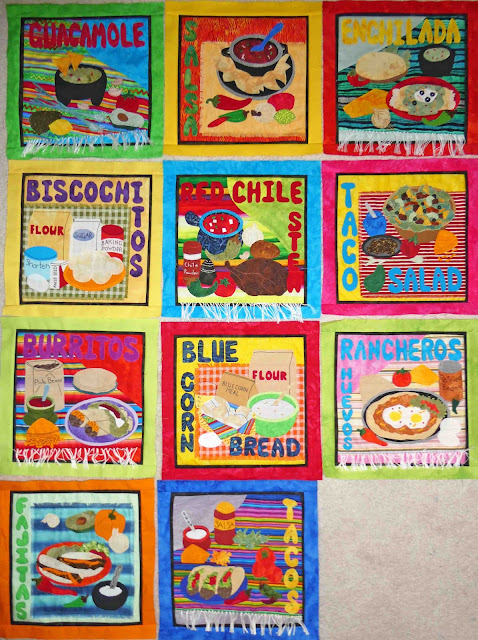 The only other sewing I did yesterday was to fill in my hoop for Pieces of the Past. I think those English Daisies are an improvement over the first one I did a week or so ago. There is still one more to do on this piece. Also, I officially ran out of that yellow floss yesterday. I'll have to pick up some more before I can continue further with the tablecloth. 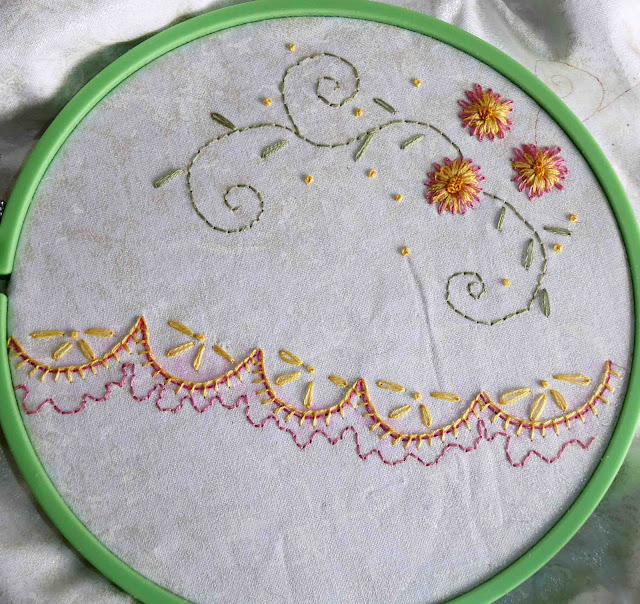 So, there wasn't a whole lot accomplished yesterday. I spent quite a bit of time on my embroidery, and I've been keeping up with my new home workout fairly regularly. I ended up purchasing several different kinds of resistance bands. Originally, I had some like this: 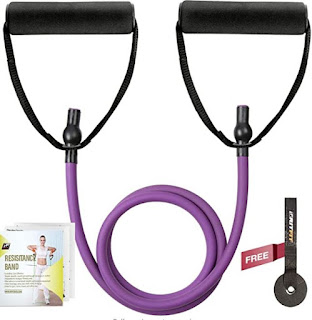 The old ones broke the first time I used them, and so I had to purchase a new set. Then, I realized I'd need this shorter version for some of the exercises. So, I invested in another version. 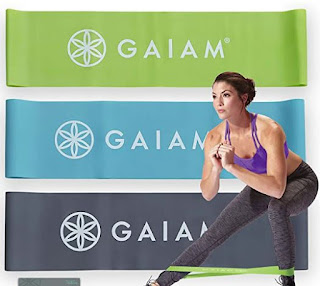 And I was trying earnestly to make the ones with handles work for the exercises that required a longer looping band, I wasn't able to do it. So, I ended up with yet another version of the bands. The one in the image below is rubber banded together, but it opens up to a continuous loop. There are differing strengths on all of these, but I'm working with the wimpiest among them. There's no use getting carried away, right? 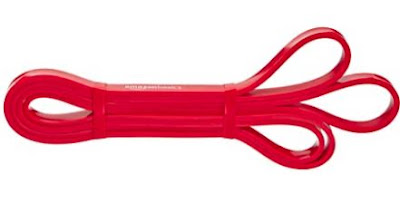 So I won't say I've worked out every day since I started this new program, but I've worked out more than half the time. I like the exercises with resistance bands. They're easier to pack around than free weights, and I can take them along when we travel. Also, I can notice some improvement in strength even after just a couple of weeks. They're also improving my range of motion in my broken shoulder.
And all of that to say I sat on the couch until around 11:00 a.m. yesterday, doing my slow-stitching. And then, I made myself do my home workout, which put me into the sewing room even later in the day. There probably won't be much time for sewing today either. We're talking about heading south to pick up a wine shipment. It would be good to get out for a drive.
Monday and Tuesday, the forecast calls for some drier and warmer weather. I'm looking forward to getting out and weeding the herb garden. Also, we're wanting to get the greenhouse cleaned out, and so there's plenty to do outside the sewing room too. Sunday morning pancakes are next on the agenda, and that's where I'm heading. I hope y'all have a nice day. Please pick up the slack in the sewing room for me.
Posted by Barbara at 7:29 AM

Your quilt is looking fabulous . Can not wait to see the last block. The fringe was perfect on the taco block.

I bought some resistance bands a few years ago because they were recommended for workouts and I've never used them. Not sure how to use them. Also bought some weights at the time and they are mostly used to hold down the long ruler when I'm cutting strips.
I think I would have skipped the fringe on the taco quilt. Don't think anyone would notice they were missing (except the pattern designer).
Pat

Your quilt blocks are making me hungry, they are so yummy. Getting close to serving up a flimsy! Thanks for the tip on the exercise bands. I just ordered a set, plus another work for Pilates type exercises.

Your Mexacali blocks are looking so good together--the last fringe being done, you should breathe a sigh of relief;))
I had used bands when I was in rehab for my rotary cuff injury years ago--but mine were just plain flat rubber...good that you see some increased strength from exercising...
hugs, Julierose

Hi. Love the quilt and embroidery. What home program are you doing? I need to get my butt into shape. Thanks, Sharon in Colorado

What a fun quilt--I bet you're pleased to have only one final block to add fringe to before you get to start the assembly.
The only exercise I get regularly is muttering under my breath, it seems :) It does bother me when I have trouble keeping my balance on one foot--and I wonder why it is only one of my feet I have trouble with? The mystery of an aging body.
Hope your weather holds for the trip and garden goals.

I haven't sewn much, so I can't help pick up the slack for ya. I don't do resist bands too well. Now that thew weather is better, more time outside in the flower beds and trying to tackle the acres of mowing.

Those English daisies are beautiful. You do such lovely work.

Catching up on posts, now that I'm feeling more human. The Taco block turned out cute! Way to go on the exercises. I'm going to need to do some in the near future, just not quite yet.