The first week of May is always busy here at the Three Cats Ranch. Three birthdays and Mother's Day, all within a week's time mean there's lots of cooking, eating, and celebrating. Today, the month can continue on with us behaving as normal people do. And while, I won't claim that we are representative of "normal" people, I am happy for our brand of normal to get back to normal, if you know what I mean.

It rained most of the day. I wouldn't have been motivated to fill our bird feeders except that family was coming. The birds and squirrels provide endless entertainment, and so I trekked out between rain showers to feed the critters. I was really glad I did because later in the afternoon, I saw a Western Tanager at our suet feeder. 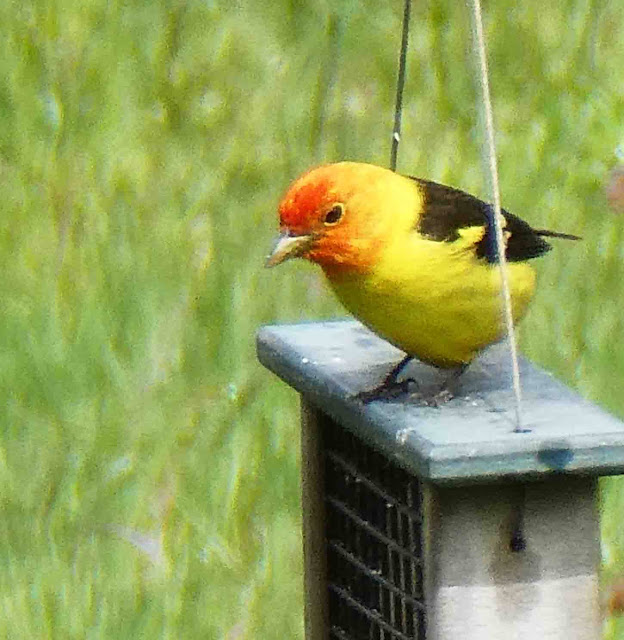 I've seen them a few times at the lower elevations, but I think this is the first time I've seen one at our feeders. 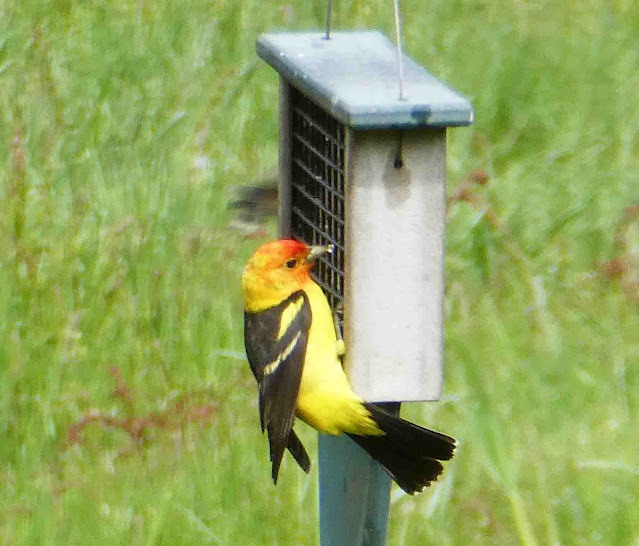 As long as I was out, I took a little walk around. Behind me, the lilacs are beginning to open at the top of the bush. 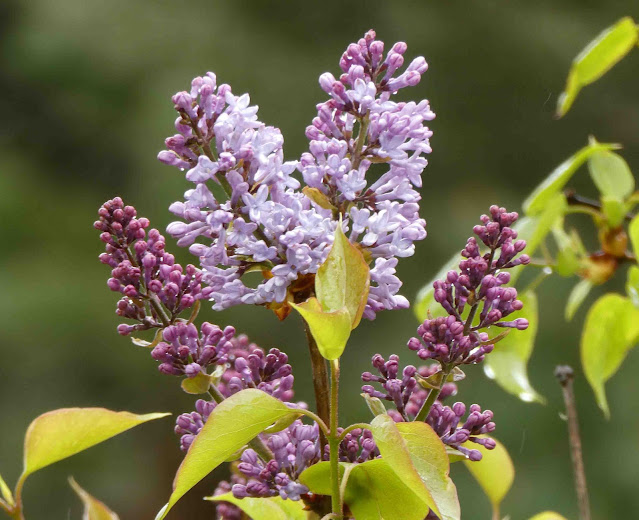 The azaleas are ready to burst forth. A few flowers have opened, and they are covered with buds. 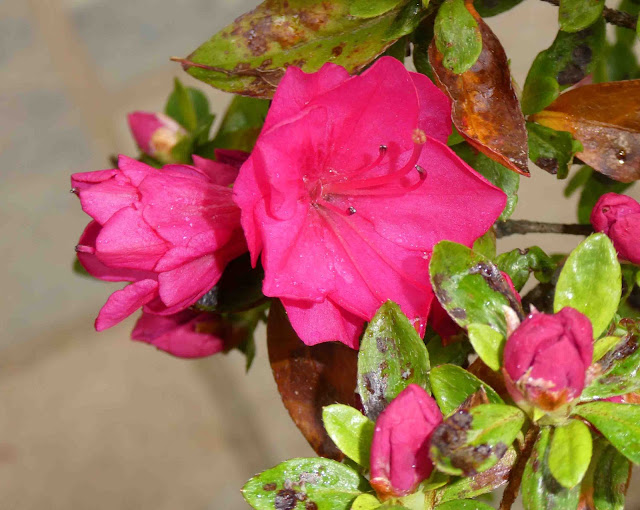 With a little warmth and sunshine, we'll have lots of bright color. 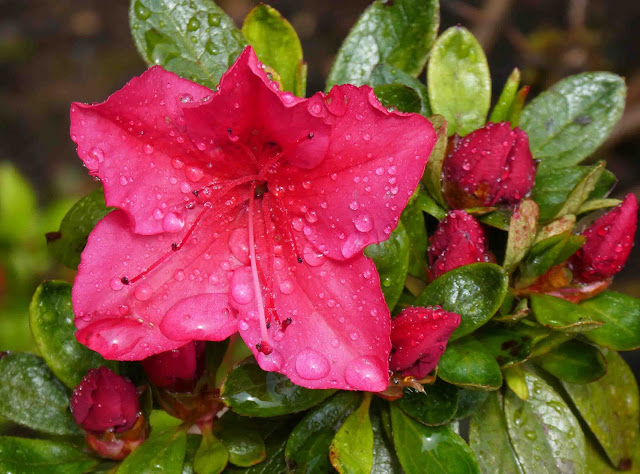 This branch up close to the foundation of the house isn't shy. It's probably a little warmer there. 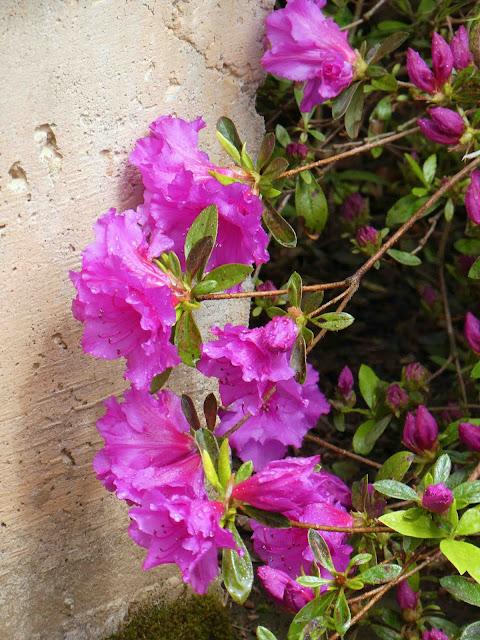 This one is so bright, I sometimes have to reduce the saturation in Photoshop to get the colors more natural in appearance. I have not edited this one. 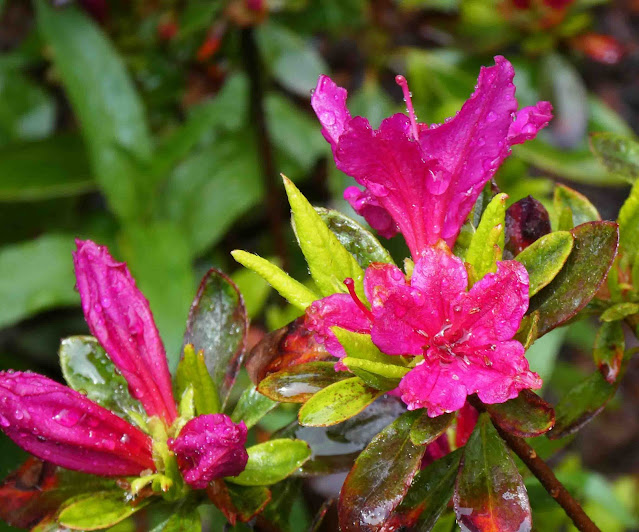 The rhododendrons are itching to open too. There are a few flowers. 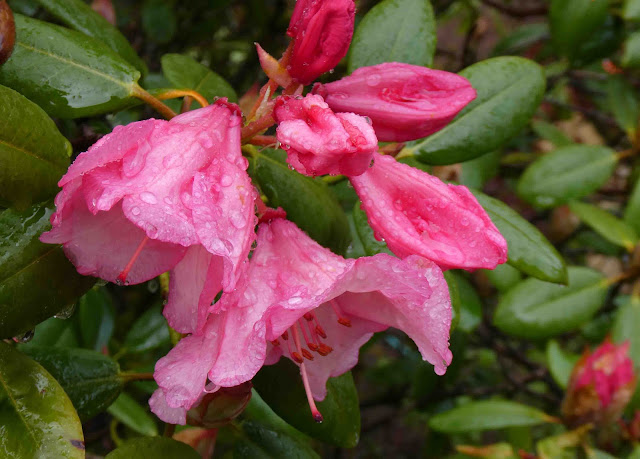 And lots of fist-sized buds. 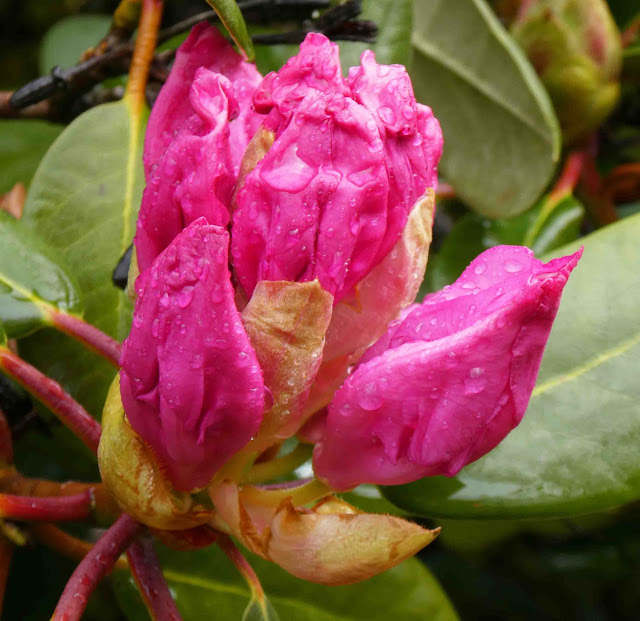 I've noticed four of the five peonies have buds now. The fifth one is still fairly small, but it's trying to catch up. 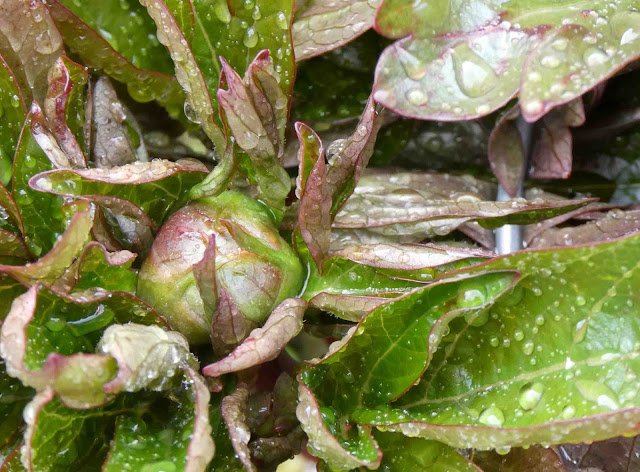 This next one is the cruel peony that forms lots of buds that never open. They go directly to seed without ever flowering. I believe this will be its third year. If it doesn't flower this year, I'm going to replace it. Three strikes and you're out. 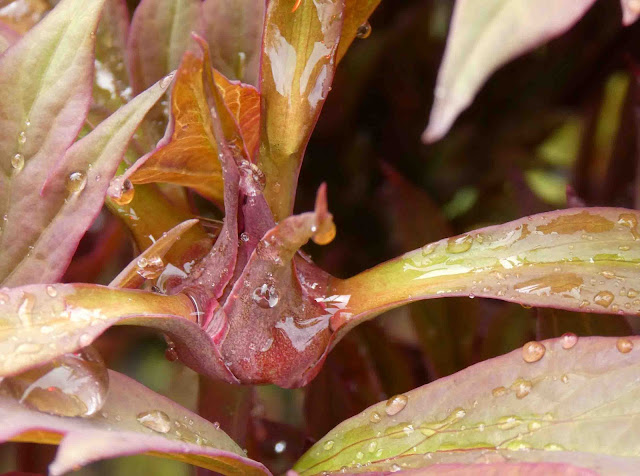 This one is already showing some color. 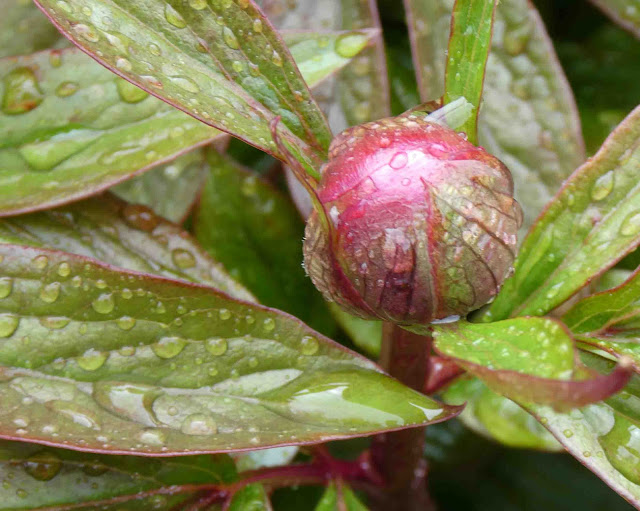 All three of the echinacea colors are above ground now. Their bed could use a good raking. 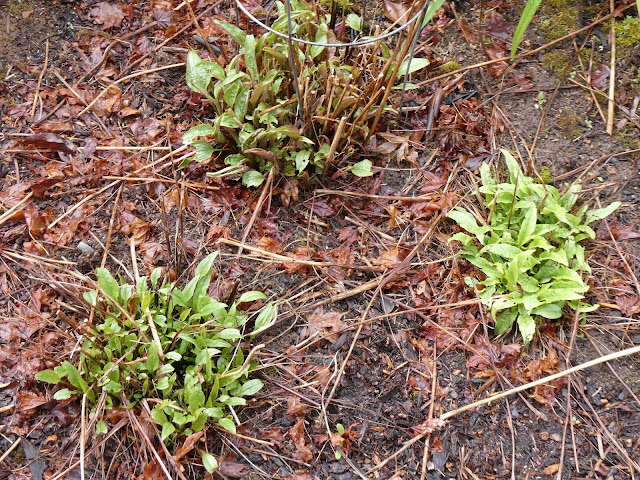 The Asiatic lily that was gnawed off by the slugs a few weeks ago appears to be recovering. (Note to self: put out more "candy" for the slugs.) 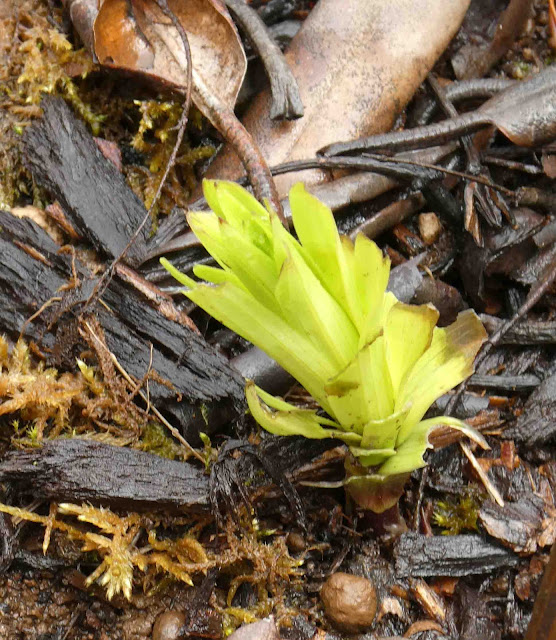 The tulips by the front door now have tinges of yellow at the edges of their petals. 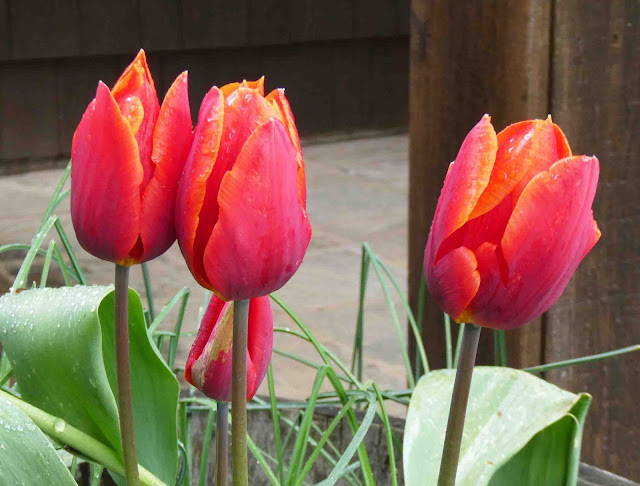 And the Bleeding Heart just keeps on blooming like a champ. 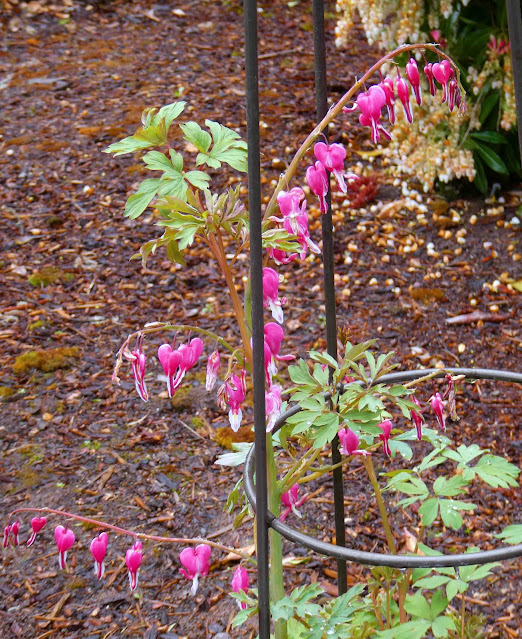 I spent most of my day in the kitchen. Mike did the roast in his smoker last night. I made green beans the day ahead. I needed only to bake an angel food cake, and make an appetizer. I made this appetizer of Caramelized  Onion-Apple Bites. The apple-onion mixture was made the day before. I just needed to add them to some little triangles of puff pastry, sprinkle them with Fontina cheese, and then bake them. They went fast! 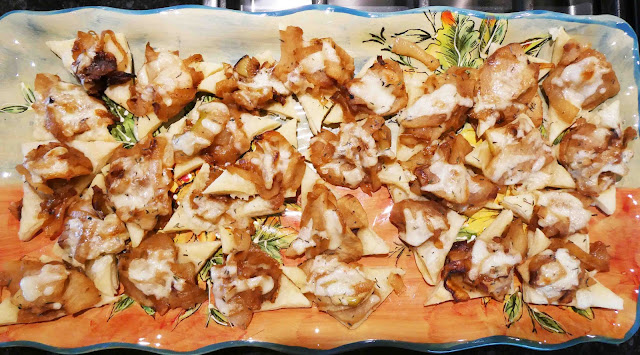 Mae, the charcuterie board queen, made us another beautiful spread. Mike and I gave her this new charcuterie/cheese board for her birthday. It has all sorts of little bowls, knives, forks, drawers, trays, chalk markers and little tags....and, oh my goodness. It starts out small and opens up into a wonderful little platter for meats, cheeses, fruits, and jams. I forget where I saw it originally, but it clicked through to this link on Amazon. 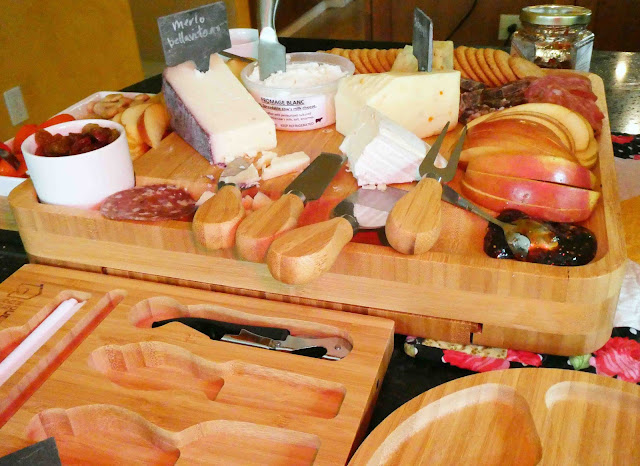 Matthew surprised us with some gourmet cupcakes. One is carrot cake, one is marionberry poppy seed. Dinner was still hours away, and so I made quick work of the marionberry one. Yum. 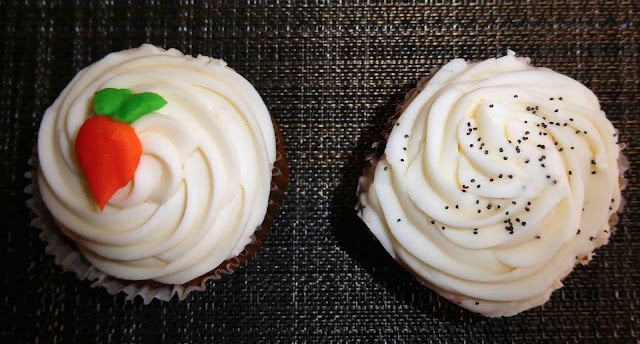 So it was a nice evening, and it's been a nice first week to the month. Still, I'm ready to settle down to our quiet life again with a little less celebrating. I celebrated returning to normal by doing my slow stitching already this morning. I filled in most of the sugar bowl. 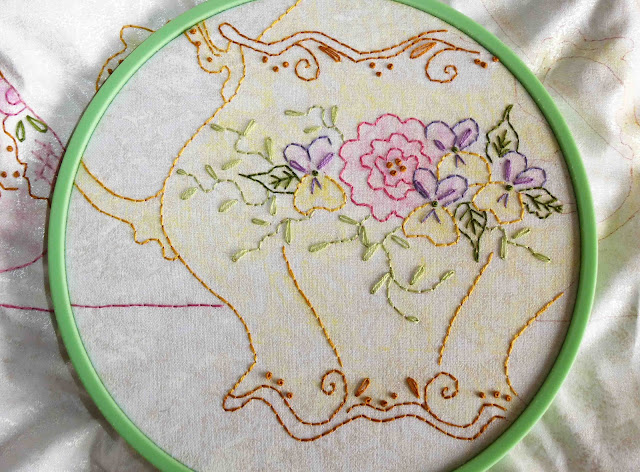 Now I've moved my hoop up and to the right a little bit where I'll start on the large bowl. I'm probably a little less than one-third of the way across. 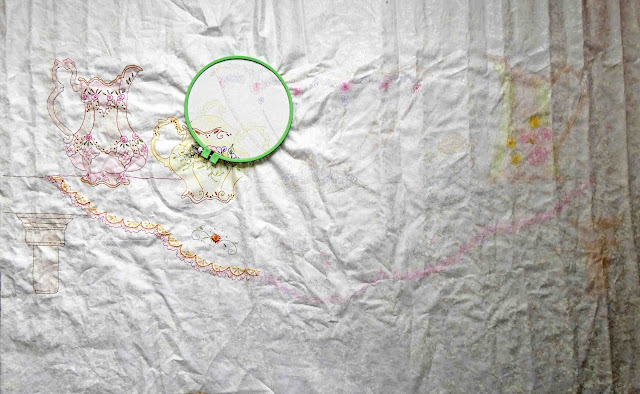 There's still a lot to do on this one.
So, I have no plans for the day, but I can't rule out a trip into town. If there's nothing else, then this will be an NBS day (Nothing But Sewing).
Posted by Barbara at 9:05 AM

Food is symbolic of love when words are inadequate. ~ Alan D. Wolfelt

Pretty sugar bowl embroidery--I like that little tint of yellow on it...
My azaleas are finally coming into bloom...still waiting on the irises...
hugs, Julierose

Your photos are stunning, so it's obvious that you are getting skilled with the new camera.

Oh man, that bird is gorgeous!!! And the flowers as well. Looks like some super good chow was had by all!

Glad you had a good birthday weekend, I missed it all due to bloglovin being down.
Always amazes me with your plants. Some are ahead of ours, like the lilacs, and some behind, like the peonies. I will have to take more photos I think.
What a super duper bird!!! Thank goodness you have a photo record of his visit.