There isn't much to report on the Traveling Three Cats Ranch front today. We were tired after a day of driving added to our weeks of being social butterflies. Also, it was a very windy day yesterday, and not particularly warm. It wasn't a good day for being outside, and so I was inside for most of the day.

The first item on the agenda was to fix the tire on the RV. I mentioned yesterday that it had lost pressure on our drive from Escondido. Mike jacked up the RV and pulled off the tire where he found this screw at the tread's edge. 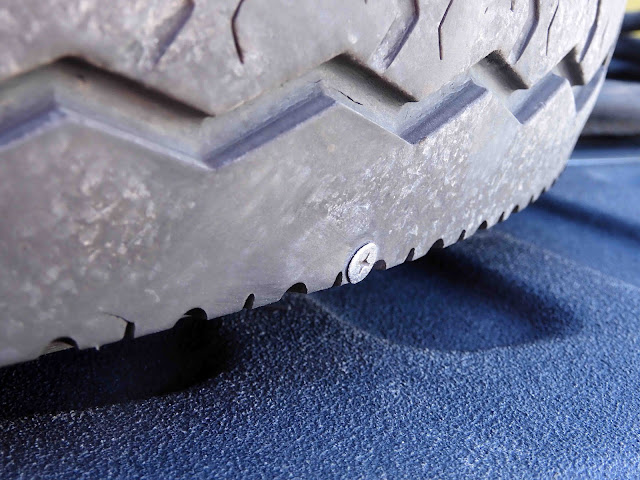 With it being located at the edge of the tread like that, we were advised to use it as our spare now. And that's just fine. Our current spare is exactly the same tire, except that it's never been on the road. Now the tire with the screw has been repaired, but when Mike retrieved it from the tire center, he realized that the tire pressure monitor was located in the valve stem of the same tire. So today he'll have to take it back to the tire center to have the monitor moved from the new spare to the current spare, and then he'll be able to reinstall it back to the RV. It's a minor inconvenience, but it turned a one-day job into a two-day job. No matter. It just means today will go much like yesterday with nothing getting done. It's really fine. And it's really an excuse...a good one, but an excuse nonetheless.
While he was dealing with the tire, I worked on my slow-stitching. I stitched enough to move my hoop to the right, and I'll start with a fresh unstitched space this morning. 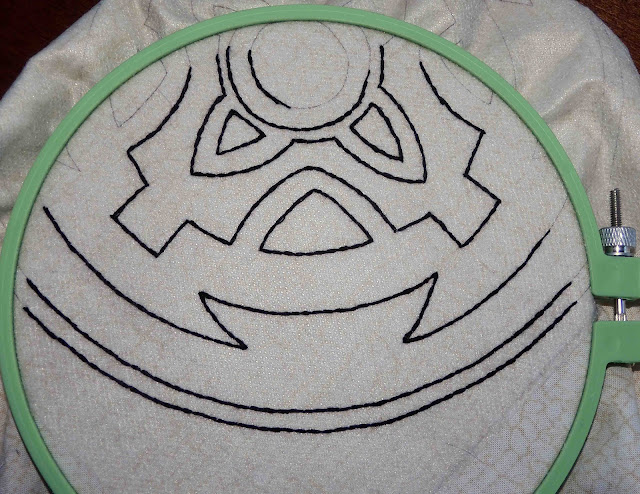 Okay, and so I hesitate to bring this up because I'm going to share a recipe that gets only about three stars from me. But it was tasty, edible, and easy, so what the heck? Try it if you like. But first...it required a spaghetti squash, and surprisingly, that seems to be something California grocery stores don't carry. Instead, they carry it in the frozen food section...something Oregon does not. So, that seemed weird. Anyway, when we were doing our grocery shopping, I'd kind of moved along from my desire to try this dish because of the lack of spaghetti squash in the produce section. Then, I was looking for some frozen corn when I spied this: 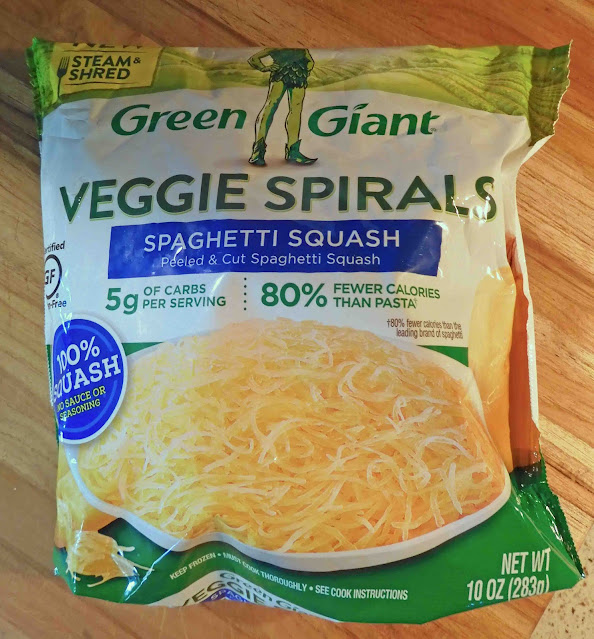 And I've never seen frozen spaghetti squash before, but okay...I'll literally bite. So I went ahead and made this recipe for One-Pan Mexican-Style Spaghetti Squash Casserole. It's an America's Test Kitchens recipe, and so you'll need a subscription to open that link. It would have taken a lot longer if I'd had to roast the spaghetti squash myself, but using frozen spaghetti squash made it pretty quick. It also gave us a chance to use some more of our avocados, which are ripening fast. 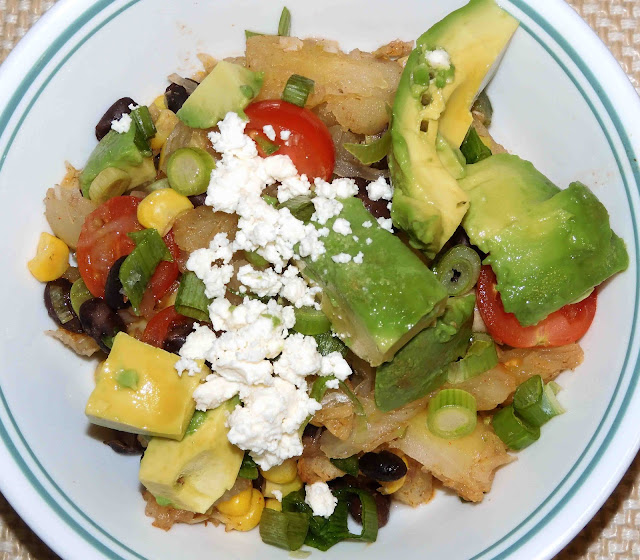 I'm not giving this a rousing endorsement. We liked it fine, but it wasn't great. It's biggest selling point was its ease of preparation. And so, if you really want the recipe and you can't open the link, email me, and I'll send it to you.
After dinner, we had our first hummingbird diner at the hummingbird feeder. He was back again this already morning. 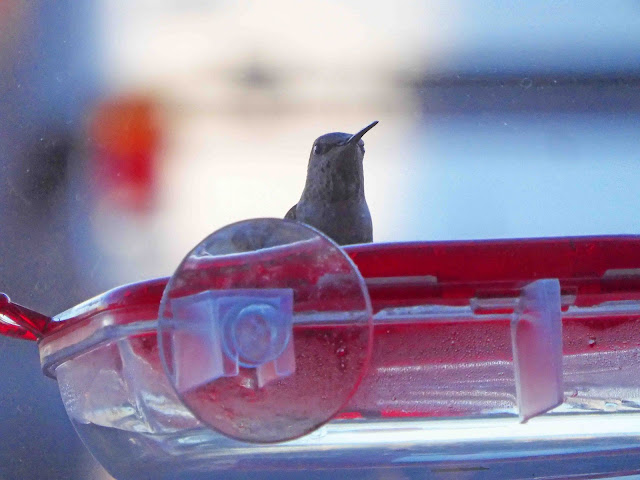 Smitty rolled out the welcome mat when he saw this new arrival. 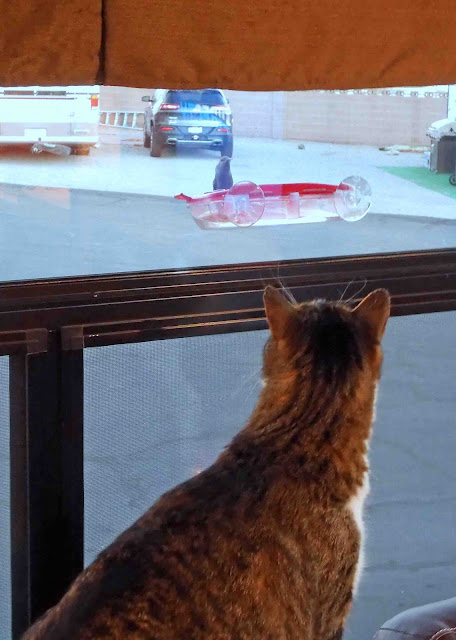 We took down our seed feeder. Many of you had some good ideas about why feeding birds other than hummers wasn't allowed, including problems with disease. And, yes, we had those same problems in the Pacific Northwest last year. As it turns out, it was to discourage the pigeons. We do remember there being a lot of pigeons here from previous visits. We haven't been outside much, but I can't say I've seen any this time around. Aside from crapping all over everything, it seems the pigeons like to build their nests in the nooks and crannies of RV's, including under the slide toppers where an RVer wouldn't be able to see them and might bring in the slides, crushing the birds, and potentially damaging the slides. And so the RV park isn't wanting to encourage them. Completely understandable.

Okay, so today we'll be hanging out here except for treks to the tire center. I'm going to get out the sewing machine and start sewing together the City Bank quilt blocks. 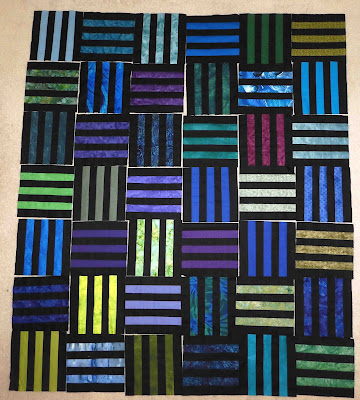 The machine has already been switched over for sewing with black thread, and it's just a matter of getting going with it. I had forgotten that it has one black border, but I'll start with the blocks today. I expect this will take a day or two to finish.
Posted by Barbara at 8:55 AM

It is bad enough to reinvent the wheel. What really hurts is when they reinvent the flat tire. ~ Lee S. Shulman

Love those striped blocks. They will make a very sharp looking quilt.

I've never seen frozen spaghetti squash here in SD either, except for leftovers I've frozen myself. I like it with just butter and parmesan, and with spaghetti sauce. But my husband won't touch it. LOL

We have all sorts of veggie spirals here including zucchini and spaghetti and butternut spirals...I like to braise them in the frying pan with olive oil and a tad of maple syrup for a finish...
Still knitting the 2nd sock cuff here...and sewing a few hexies...
We are forcast a snow event for this Fri-Sat...it's pretty cold these nights...only 19 now at 7 pm...so you know it'll be going down lower!! thanks heavens for quilts!! Hugs, Julierose

Funny, we have spaghetti squash in the produce aisle in the San Francisco Bay Area. Maybe it’s a "supply chain issue". I like the City Block quilt. It will make a great man cat bed addition. All will be in order soon at the 3 cat rolling ranch. Then you can go out and play.

broken ball valve for main water line to house. Started out at $975 for a 40 minute fix. Had it reduced by over half when I returned from a sewing retreat.

water leak to the tune of 3,000 gallons a month. Turned out the last service technician installed the check valve on the wrong end of our Reverse Osmosis system in November.

The above started by my asking the water company why my bill showed zero usage. It was being reviewed and a meter guy was sent out to inspect. I’m fearful of what the new bill will be.

We’ve had a busy and expensive month which includes a water drainage system around the house and a new patio. The old was taken out to put in the drainage system. Next up is landscaping after the big dig.

I've never looked to see if i can get frozen spaghetti squash, to be honest. Glad the tire repair went well, and that you have a hummer visiting.

Going back to revisit the lack of birds eating your (former) birdseed offering, a friend told us that having a nearby water source (i.e. a birdbath in our case) would encourage more birds to take advantage of the meal. Although skeptical, I paid attention and there did seem to be a correlation. Audubon didn't mention it in the article I read with tips for backyard bird feeding, though, so maybe it's poppycock. (BTW, don't read the etymology of that last word, which has nothing to do with birds despite my poor pun. Yeesh.)

Every time I see your city bank blocks I am amazed anew at how much I like them. Was the frozen squash watery? I have trouble enough with the fresh stuff so curious whether it is wetter or less so? I've never seen it here but then again, I've never looked.

Frozen spaghetti squash would save a lot of time, I must check out the frozen food section when I go shopping. I am looking forward to seeing the city bank quilt blocks sewn together. I love the colours in the blocks.