It was a nasty day weather-wise yesterday. Dark, and raining sideways. Oregon at its worse. This was all we saw of Sadie. 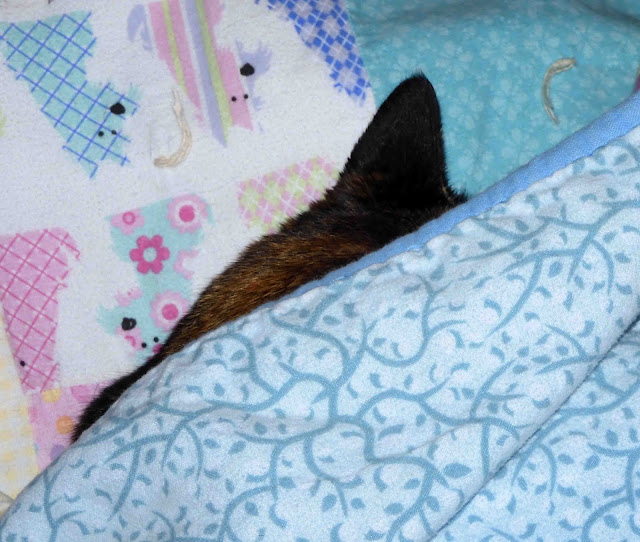 Smitty thought she had a good idea. Despite the darkness, the light was too much, and he had to cover his eyes. Besides, you never know when someone will flash a camera in your direction. 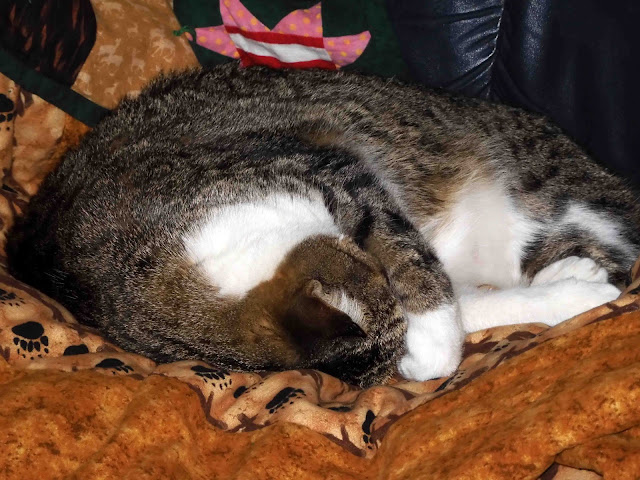 Upstairs, I went to work quilting the Appalachian Memories quilt. For the quilt blocks, I'm using a light tan Aurifil 50 weight thread. This one was a gift from my quilting fairy godmother, Ila. Thank you, Ila. 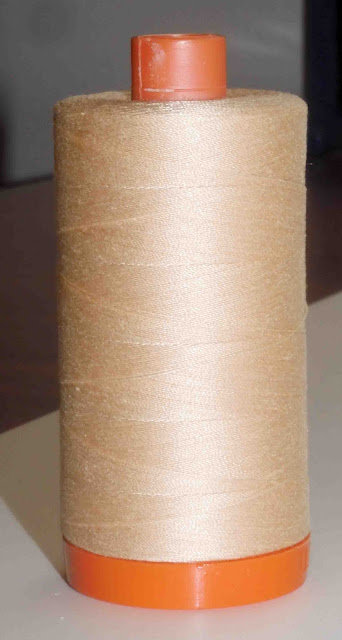 I settled on gold for the bobbin. There was a bobbin already wound and enough thread left on the spool to get the job done. I have some other spools in this color if I need them. This is an Essentials thread, and there is no labeling left on it. It feels like a 40 weight thread. 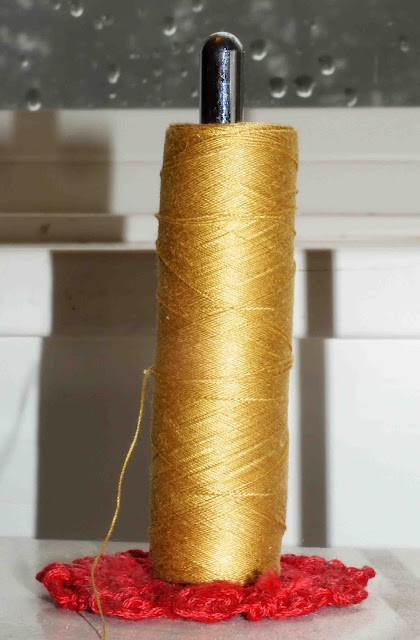 For reference, here's another look at the whole quilt:

I started with the middle vertical row of blocks, and I'm keeping the quilting pretty simple on this. For the quilt blocks, I'm outlining the main parts of the barns and then using a swirling meander in the background. 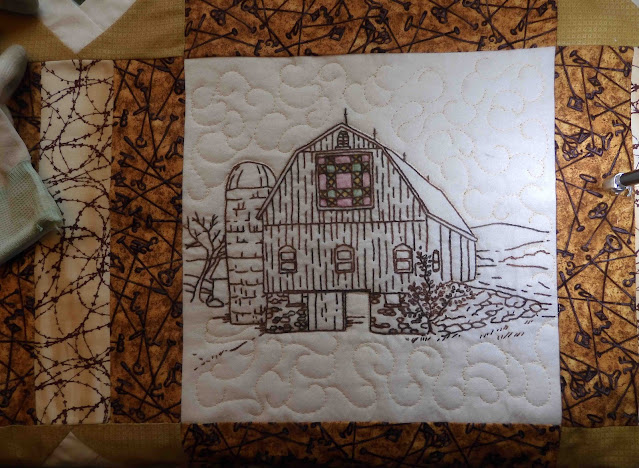 When the middle row of blocks was finished, I quilted the vertical rows of sashings. For this I used an over and under looping thing. I've used this motif before. It makes me think of rolls of barbed wire fencing. 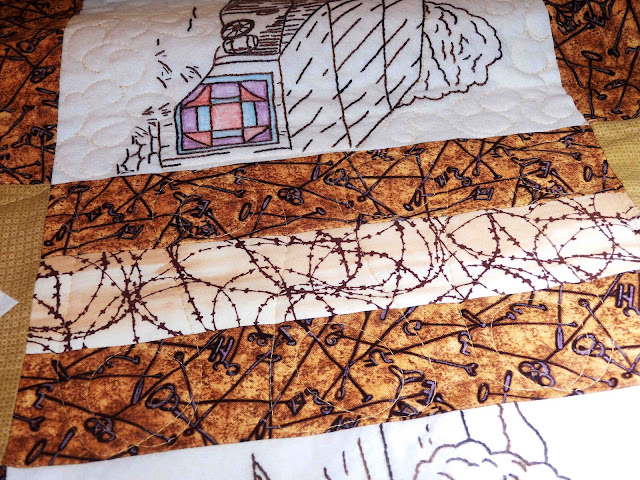 It's a little hard to see in that image, and so here's a snip of the one I saw on Pinterest. 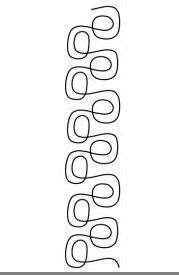 When I came to the quilt block cornerstones, I just quilted a couple of humps to get across to the next sashing. Eventually, I'll fill these in with more humps when all the sashings are quilted. 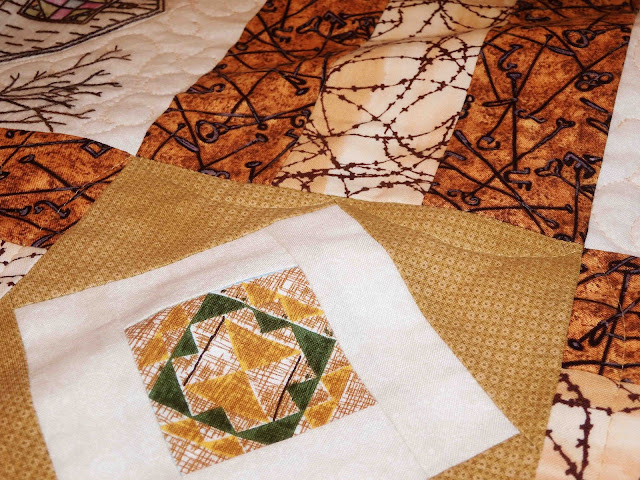 Here's how it's looking from the back. 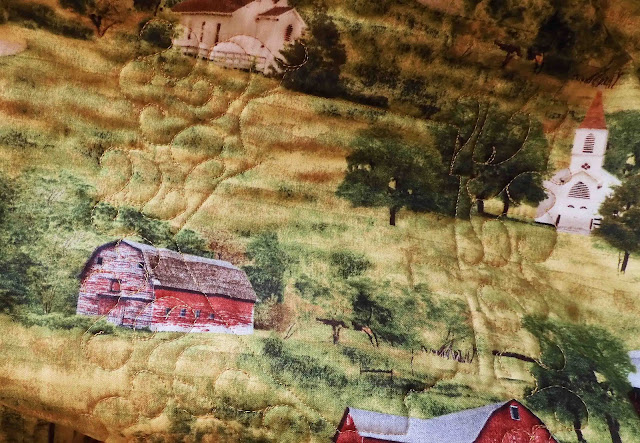 So yesterday's effort finished off the vertical rows of sashing and the middle vertical row of quilt blocks. I called it quits from there. There was still plenty of time left in the day, but I've learned not to overdo it when I'm sitting at the quilt machine, especially when I'm hefting around a large quilt like this one. It tends to give me tendonitis in my left wrist, and my shoulder doesn't like it either.
Dinner last night was leftovers that only needed reheating. It seemed a good time to try out a make-ahead breakfast for Eggs Benedict Casserole. You can find the original recipe right here. Mine was adapted since the original makes enough for a crowd. We're meeting up with some friends when we head south this winter. There will be eight of us (4 RV's) staying at one of the state parks in California for a week. All of us will be together for two of those nights with couples coming and going throughout the week. We've already planned two potluck-style dinners for the two nights we're all together. I thought it might be fun to make an easy breakfast for the group one morning.
As for the adaptations, I cut the whole recipe in half, including using just half of the package for the Hollandaise sauce mix. Mine was baked in a 8 x 8 baking dish. Also, I substituted diced ham from the grocery store for the Canadian bacon (6 oz. total to make half the recipe, 12 oz. for the whole thing). They're pretty much the same thing, just cut from a different place on the hog. It made an already easy recipe that much easier. I used the extra crispy English muffins. That's just how we roll here at the Three Cats Ranch. I mean, just look at my cats if you don't believe me...extra crispy for sure. Oh yes, and I used unsalted butter in the Hollandaise. I quit margarine years ago. So it's all made up ahead of time, refrigerated overnight, and then baked up in the morning. Here's how mine looked coming out of the oven. 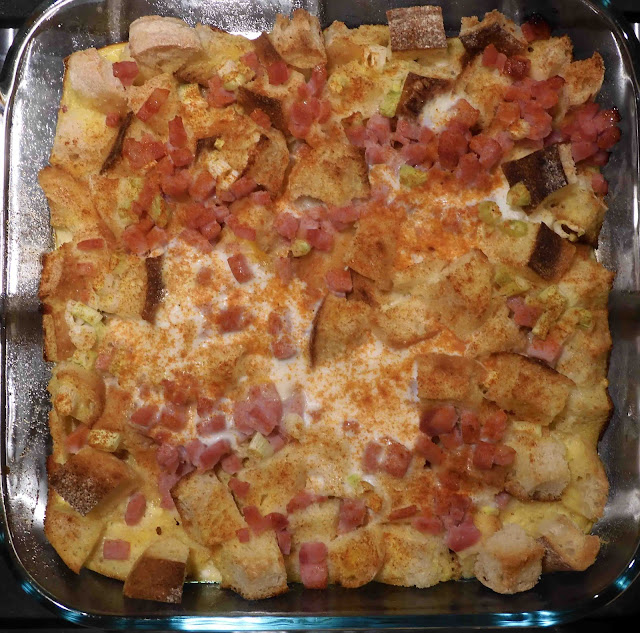 To make it easy, I used the packaged Hollandaise sauce mix from Knorr, but really, home-made is far superior. Nevertheless, packaged it was this morning. Here's how it looked just before we ate it. 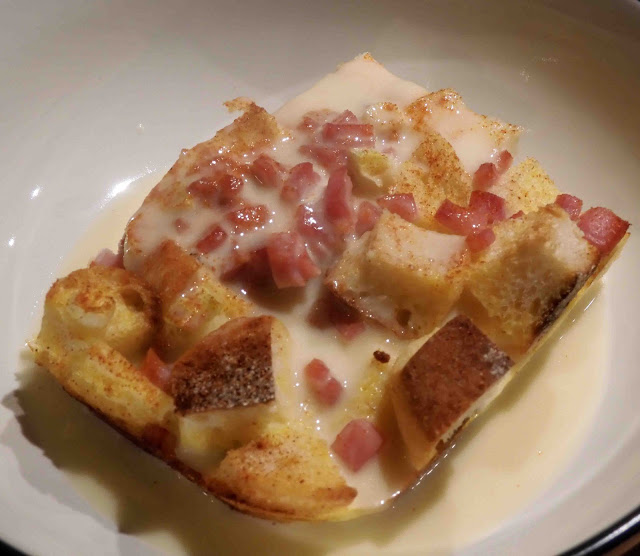 So we both gave it two thumbs up. If you're looking for something that is true Eggs Benedict, you'll be disappointed. But if you just want an easy and delicious breakfast that you can make ahead of time...this is a winner. I'll definitely make it for our friends when we head south.

This morning I need to go into town. I'm getting a bone density scan this morning. It's been several years since my last one. Last time around, everything looked good. I'm curious to see what this one will show since my orthopedist told me the bones in my shoulder were "demineralized." Hm. I hope I'm not degenerating right out from under myself. I'll know more after this scan. As long as I'm in town, I'll pick up the accumulated stuff on my grocery list. There should be time to get back to my quilting this afternoon.

To succeed in life, you need three things: a wishbone, a backbone, and a funny bone. ~ Reba McEntire

Thank you for sharing your quilting ideas for this lovely quilt ... very inspiring!

You really quilt so beautifully--Take care and don't hurt your shoulder....
Hugs, Julierose

Another recipe to consider when company comes. Thanks

The sashing design is quite a clever method to tie the quilt together by theme.

The barn quilt is so pretty, and I like your quilting. I'm a bit jealous of your fairy threadmother, Ila. She sure gifts you some great thread! Eggs Benny is a favorite of mine, so I may have to try this little knock off recipe - yum!

I do love that quilt! And the backing fabric is absolutely beyond perfect...barns and churches, what could be better. And then you topped it off with another recipe I'm printing for Resident Chef to tempt me with.

I'm in the Smitty and Sadie camp. We have had cold temperatures, snow, rain, sleet, more snow and blowing winds for the last few days. I really like the barn quilt and I am glad you showed the loopy diagram as I couldn't see it in the quilt picture.