We're All in our Places

There was a pretty pink sunrise this morning. It was a reminder to enjoy it while it lasts because we're expecting a deluge of rain over the next ten days or so. 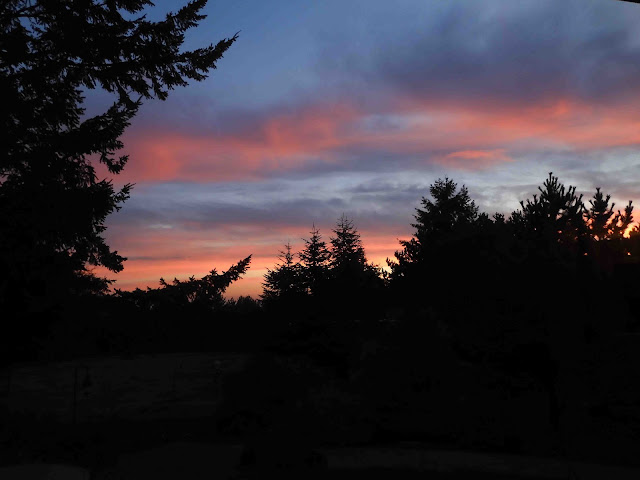 Smitty was enjoying the view from his kitty pole, where he is master of all he surveys. 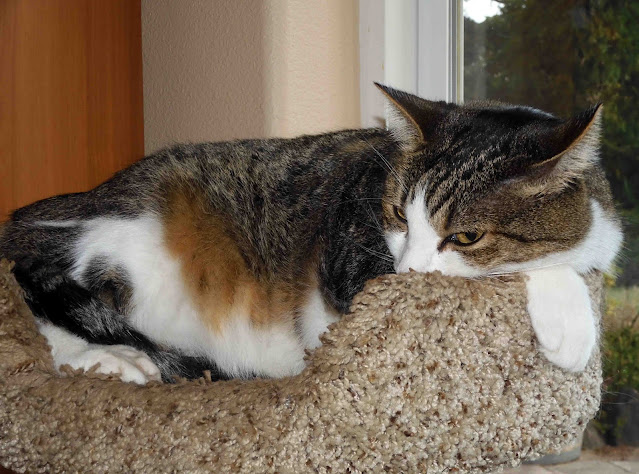 Sadie was wrapped up in her flannel quilt, which is her favorite place to be in the morning. 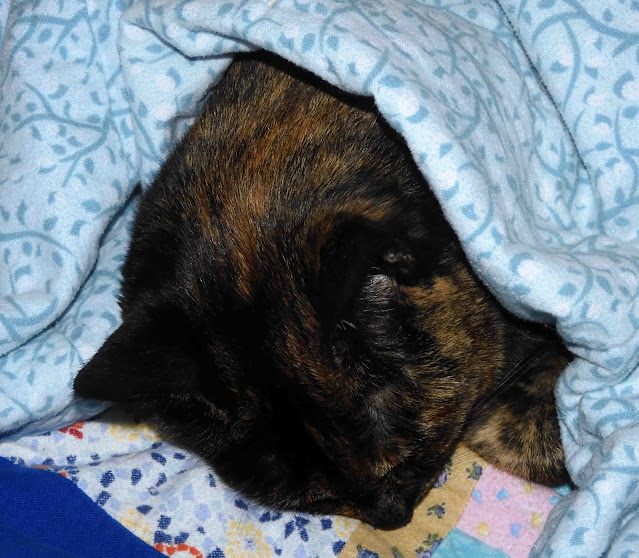 For my slow stitching enjoyment yesterday, I stitched up October's block for the Posies quilt. 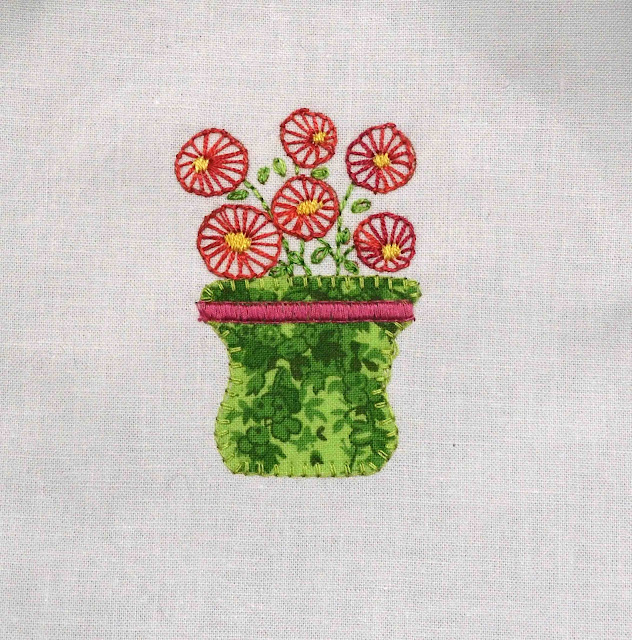 From there, I needed to add the borders, and finish it off. 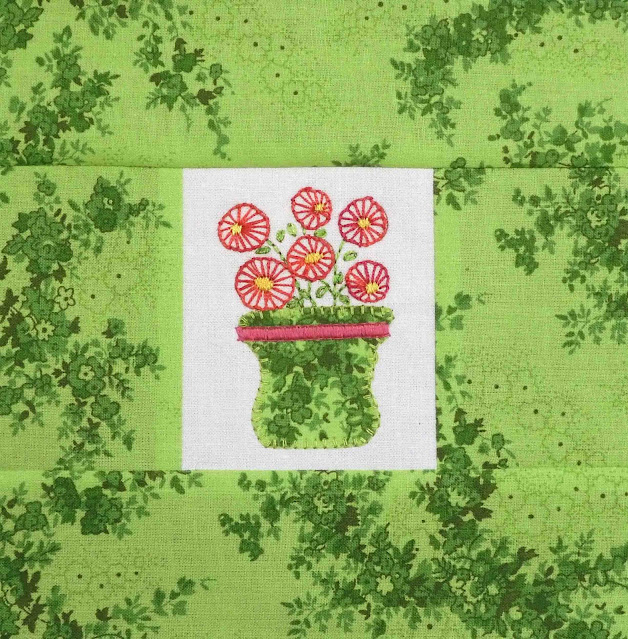 This is also my quilt for the Rainbow Scrap Challenge this year, and so I'll be linking up there this coming Saturday.

These are all the blocks I have for this quilt so far:

I believe all the colors have been chosen for this year's Rainbow Scrap Challenge. You might remember I jumped the gun in September and did mine in Lavender when the color of the month was supposed to be orange. I'll do orange for November, and then I'll probably do one in multicolors for December.
It was time to leave for my morning rounds. On my list, get an x-ray, see the "shoulder guy," get a flu shot, do my grocery shopping...hm...anything else? I can't remember anything else. So I went out to start my car, which hasn't been started in at least six weeks. The battery was so dead, even the lights on the dashboard did not light up. Oops. Probably should have considered that possibility the night before.
So I called the doctor's office, and was able to reschedule for later in the afternoon. That left me with some more time to sew in the morning while Mike hooked up the battery to our battery charger. (He usually leaves it hooked up whenever we're traveling, but didn't this time...for whatever reason.) That was fine with me. I wasn't mentally ready to jump back into life with both feet.
Instead, I admired the fall leaves at the far end of the field... 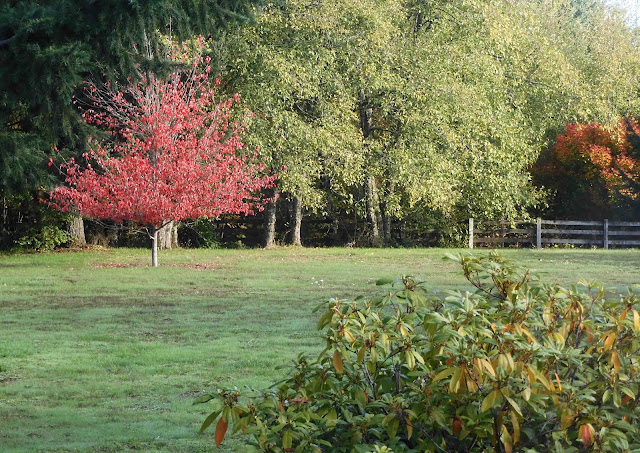 and then I went back to work finishing off the applique for the next New Mexico Kitchen block. When I had it this far, it was time to go again. Fortunately, the car had its mind right by that time. 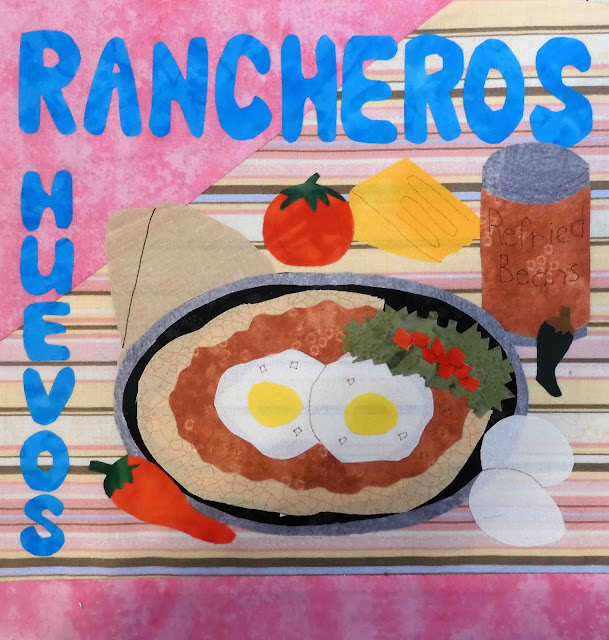 So, I went first for the flu shot. No sweat, but it did give me a sore arm. Then I did my grocery shopping. Then I got my shoulder x-ray, and then I saw the doctor. He was impressed with my progress, and gave me a little dose of realism. I probably won't regain full range of motion, but I'm happy with what I have. He showed me the x-rays. The breaks are healed, although the large bone, the humerus, is a little malformed now. It at least partly explains why I won't return to full range of motion. It's a different joint now, and it won't ever behave like it did before the fracture. And while that sounds like bad news, I'm happy with where I'm at. I expect I'll gain more strength in the coming months. Now I'm discharged from treatment, and I can move along from that unfortunate episode.
From there, I headed for home. The only thing I still needed to do on my quilt block was to add the "grated cheese" over the top of the eggs. 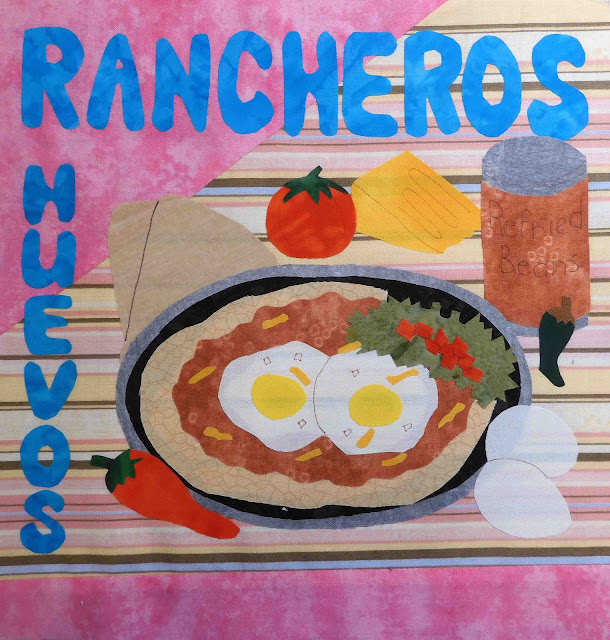 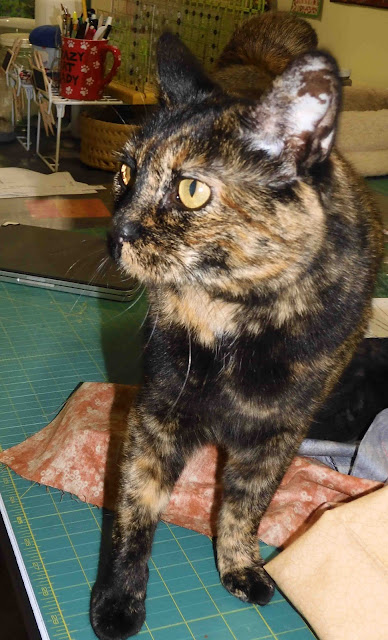 When I finished up for the day, the quilt block was ready for its machine top-stitching. 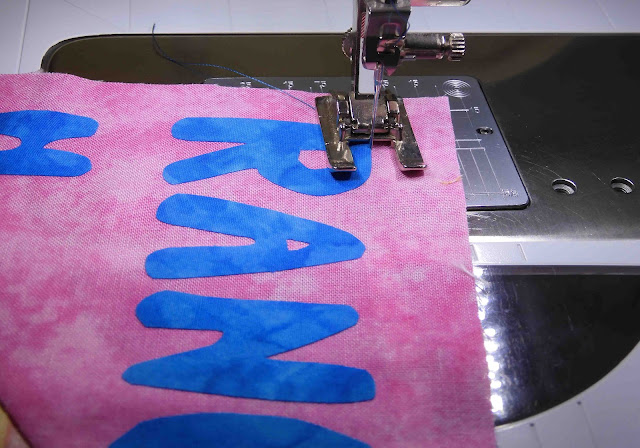 I'm very happy to report that our roofing project got underway yesterday. A crew of two showed up around 11:00 a.m. and went straight to work. By the time they finished for the day, they had almost completed the garage portion. 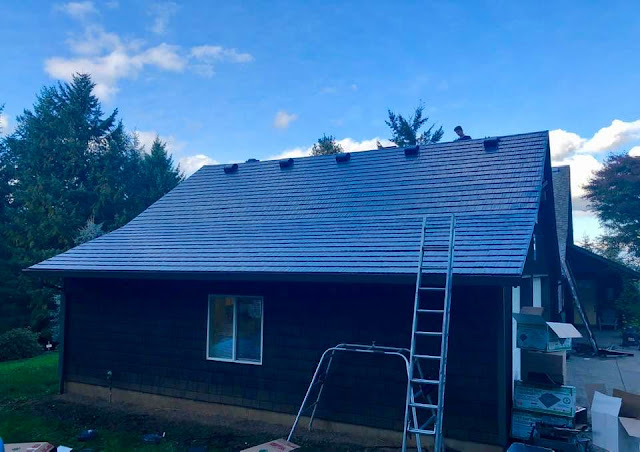 It's a little hard to see the color in that image above. We're using interlocking metal shingles in hunter green. Our property is wooded and mostly natural. We wanted the house to blend in with the landscape. With our dark cedar shake siding and a green roof, we're fairly well camouflaged. 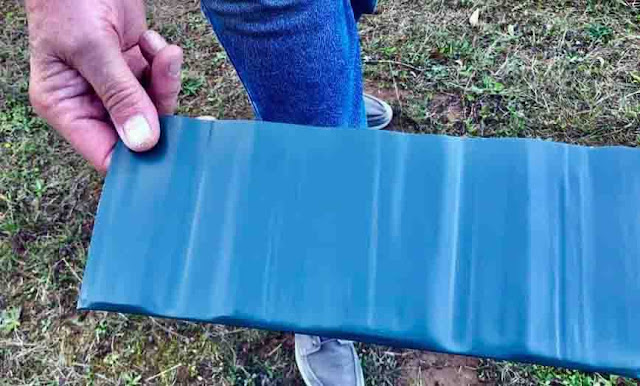 They worked until it was too dark to continue. (A third guy joined them late in the day.) They arrived just as the sun was rising this morning and went straight to work. By the sounds of it, they are on the main part of the house now. They have assured us they will work rain or shine (and they claim to have worked in snow too). It's a good thing because this will be our last day of sunshine for a while.
As for me, I'm going to take advantage of this last day of sunshine to cut back the peonies. It's the one gardening thing still left to do before settling in for the winter. There's one short housekeeping chore to do, and then I'll get back to my sewing. I'm hoping to get well along on the New Mexico Kitchen block, but I doubt I will finish it today. Sometimes I surprise myself though, so anything is possible. Right now, I'm heading off to do my slow-stitching. The kitty alphabet is not going to stitch itself.
Posted by Barbara at 8:55 AM

Working on a roof in the rain would be motivation enough for me to get the job done lickety-split. Glad they finally showed up. Good news on the shoulder treatment, too! Good that you can put that behind you.

Glad you didn’t have to start from square one again regarding the roof! Really like the gratitude quote, too. Sadie brought back fun memories of my elementary school roller skating parties…we ALWAYS did the hokey-pokey at those!

Good news on the shoulder. I have noticed the weather impacting my shoulder but I have remembered that Salonpas is my friend. On the aches days I have slapped on one. It is nice to see progress on the roof.

I just like be the way you share info on your blog Barbara…. I like how you chose to do an rsc project!!! Very neat!
Enjoy your sunrises before the rains come!
Kathi

SO glad the roof guys came! Getting secure for winter is a GOOD thing! We're trying to do that too, getting ready for winter, but not everything cooperates with the DIYer.

I'm glad you got some good news about your shoulder - maybe not perfect news, but at least if you're content with where you're at and you're discharged from further care it's something positive.
Very happy to hear your roofers arrived - just hope they get you closed in before the rain comes.

The Posie blocks are so very cute! They are perfect for an RSC project. I'm sure you are happy to be on the mend again. Broken bones always seem to take longer to heal than we would like.

I love those Posies blocks! They've been fun to see as you've made them throughout the year. Looks like everyone is happy to be hone again! I did enjoy following along on your travels.

Another sweet block for your RSC project, Barbara!!

I just really like your posies blocks! I can’t wait to see the completed quilt top! Glad you got “released”! Sometimes we have to go with “what is”! We got boosters this week…a bit of a sore area too, but not worse than the flu shot!