The roofers put in a full day yesterday. They arrived around 7:00 a.m. and worked past dark, until around 8:00 p.m. I was getting worried about them being on our steep-pitched roof past dark. They were using headlamps, but I still doubted that lit up the area around them enough for it to be safe. But then...roofing. Is it really safe? Even in broad daylight? They were trying to get the job as far along as possible because rain arrived overnight. We're expecting rain well toward the end of next week, and beyond. That's as far as the forecast takes us.

It's made venturing outside rather unpleasant since they're regularly tossing something off the roof. Also, the pounding and hammering and stomping and battering and banging. Need I go on? The kitties were very brave though. I was surprised they'd show themselves with the dreaded "Mans" in the yard. After staying in the entire previous day, they decided enough is enough and went outside anyway. Smitty, the more sensible of the two, didn't stay out long. 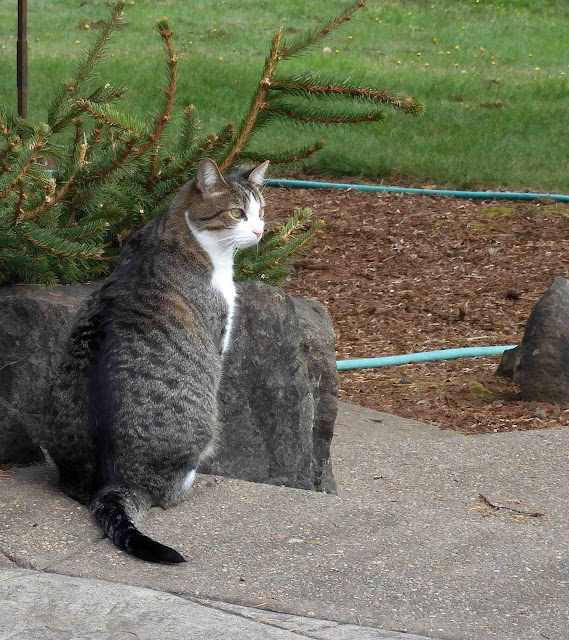 Sadie was bolder and walked right past those Mans. She's tough. I worried a little bit about getting her back inside, but she came when called. Kitty treats are a powerful motivator. 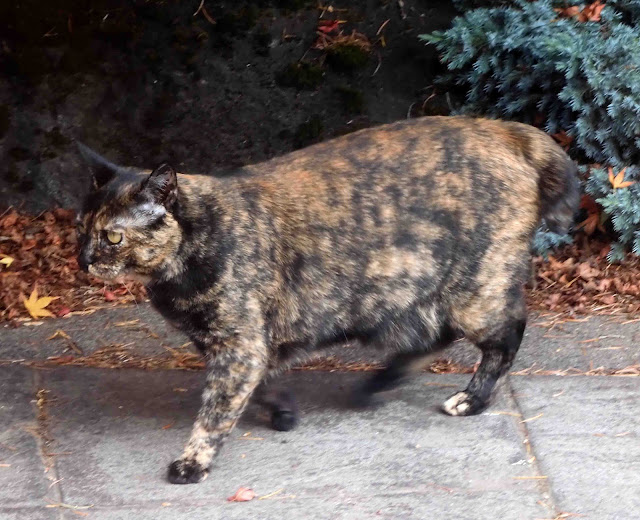 There were peonies to cut back, but I first stopped off in the greenhouse. Amazingly, I found four slicing tomatoes. We turned off the water in the greenhouse when we left on our trip at the beginning of September. The other tomato plants are all withered and dead, but this one, closest to the door, was as green as it was when it was being watered. I can only think it draws enough moisture from the air to keep it going. It was a nice surprise to find these pretties. 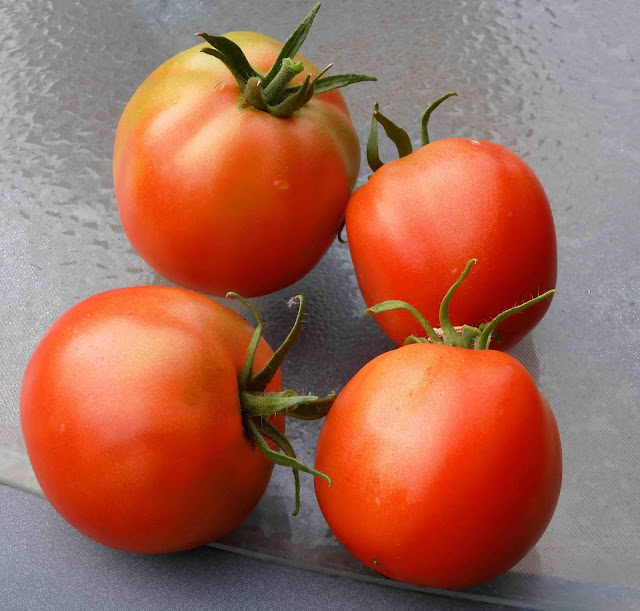 Stepping back outside, I noticed the red Japanese maples looking their fall best. Below the one on the right, you can see the peony bed. It didn't take long to cut those back to the ground. They all had bright red nodules, indicating next year's growth. 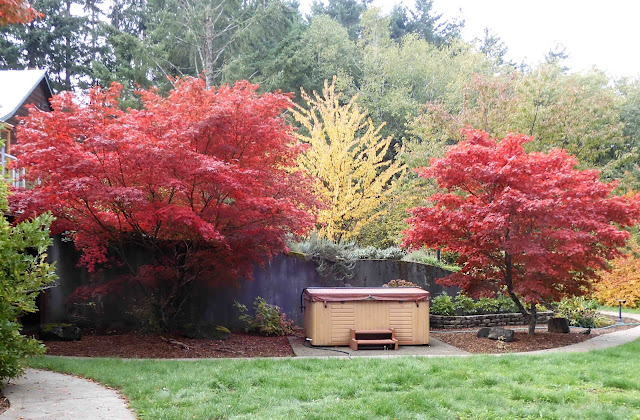 I threw the clippings into the vegetable garden where they'll become fertilizer. Then I marveled that the bee garden is still blooming away. There were Black-eyed Susans and Cosmos... 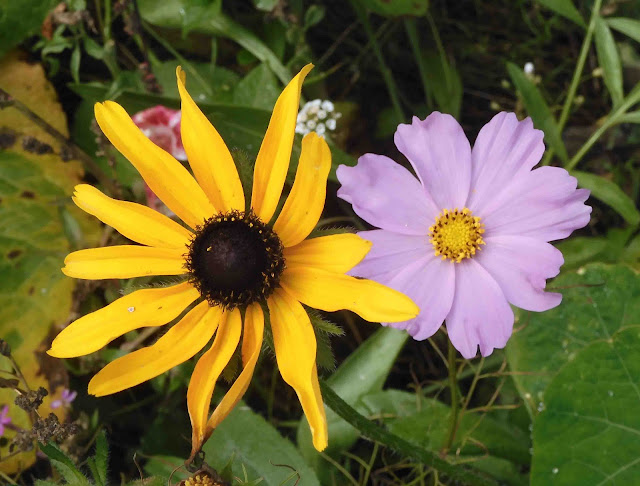 And lots of godetia. (Thanks to my friend, Marei, who identified these for me.) 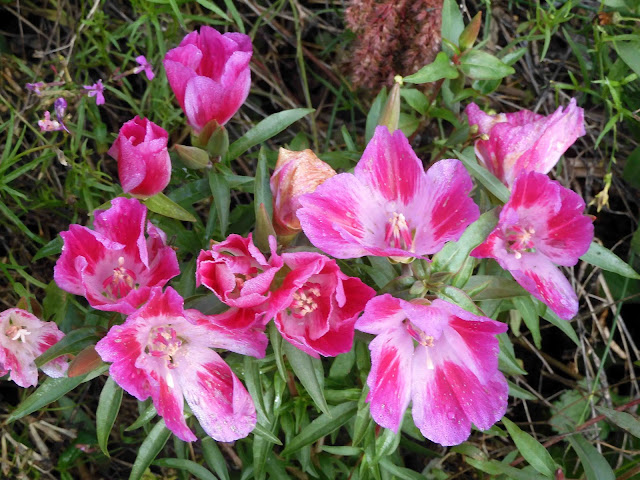 Now this is something new. It looks like a poppy, but these bloomed after I last left the garden in early September. They were new. 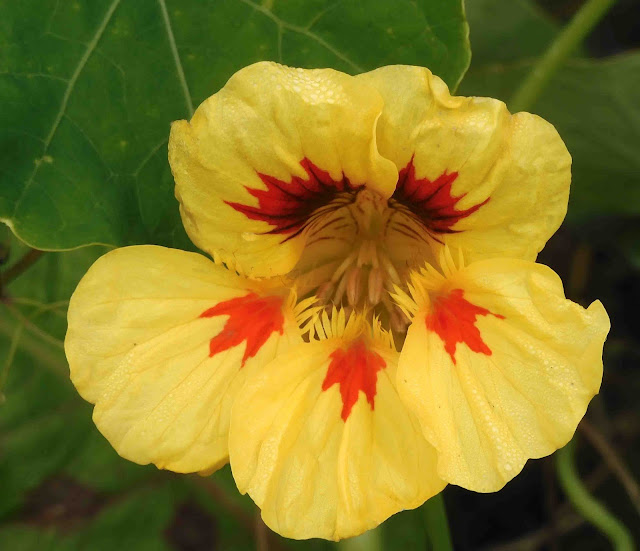 There were a few cornflowers. 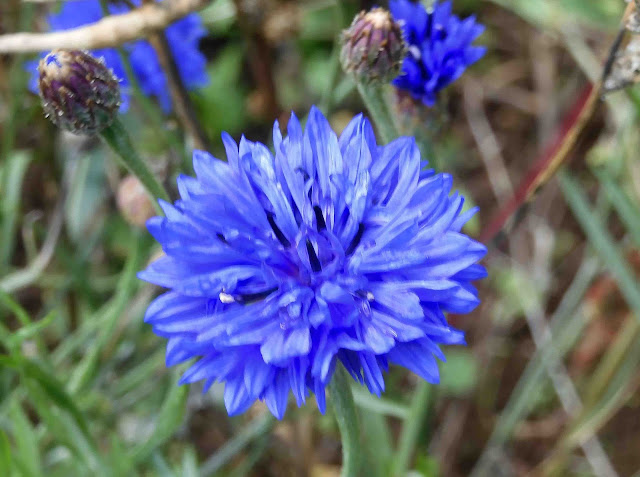 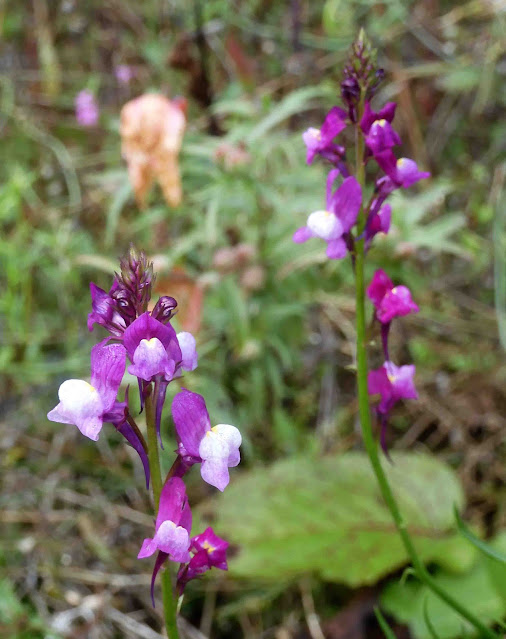 We're planning a trip to Alaska next summer, and so we won't be planting a vegetable garden. Still, I'm going to try to keep the bee garden going. Mike will mow it next spring, and I'll throw out another pound of wildflower seed. Mike has an automatic sprinkler system going, and so we'll be able to keep it watered and productive while we're gone. The fruit trees will thank us for keeping the bees around.
Also, I found zucchinis that had grown to the size of New York City. 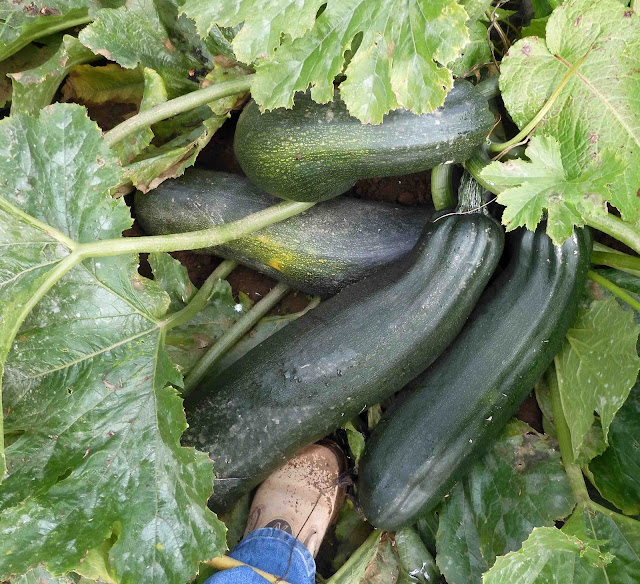 The birds had done a great job of picking clean all the bloomed out sunflowers. Since their birdfeeders were empty, I hoped the sunflowers would tide them over until our return. This little bird was there in the garden chipping at me during my entire visit. 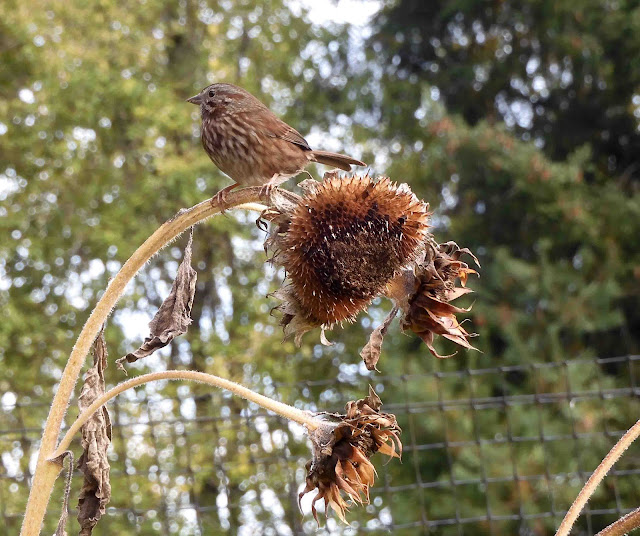 Back inside, I went to work top-stitching the latest New Mexico Kitchen block. Smitty was my helper cat. 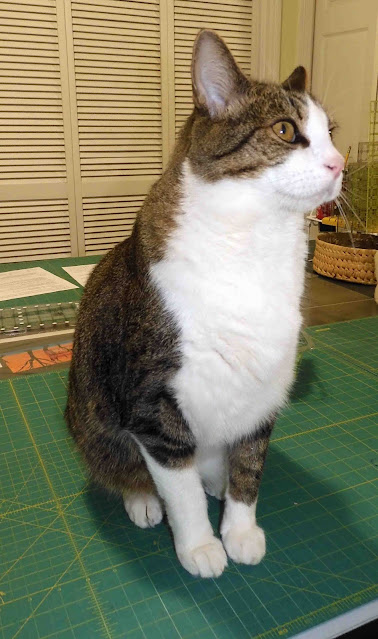 And he was truly helpful...getting right up next to the sewing machine while I stitched. He kept a nice length of thread pulled from the thread spool at all times. 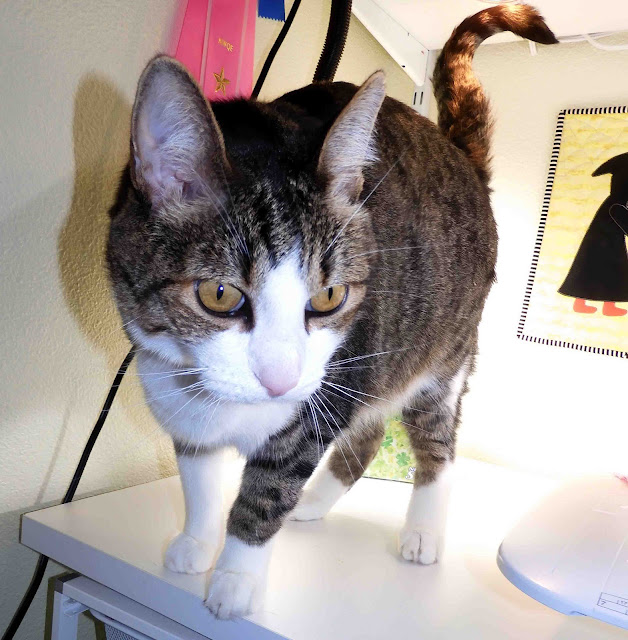 Sadie decided to get into the act when Smitty grew bored. She couldn't decide if she should be up... 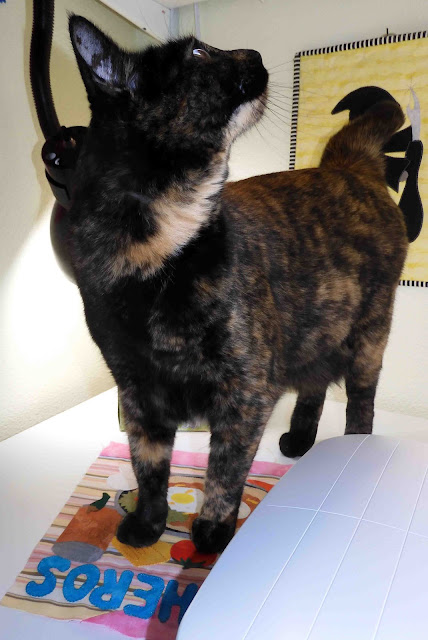 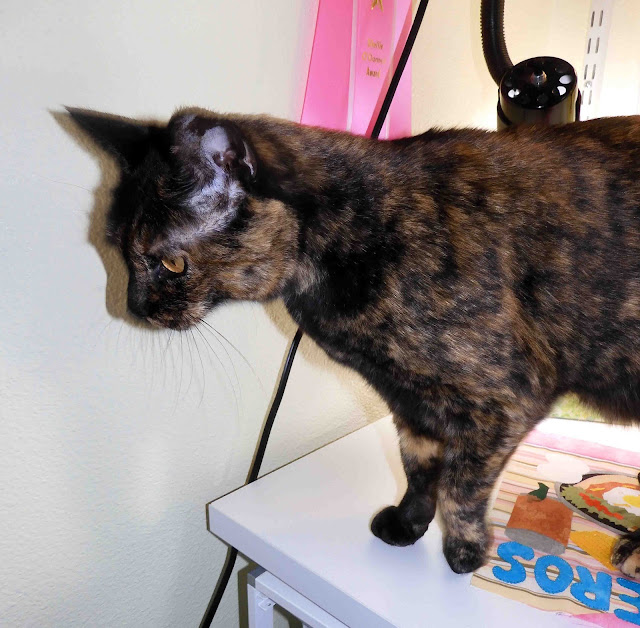 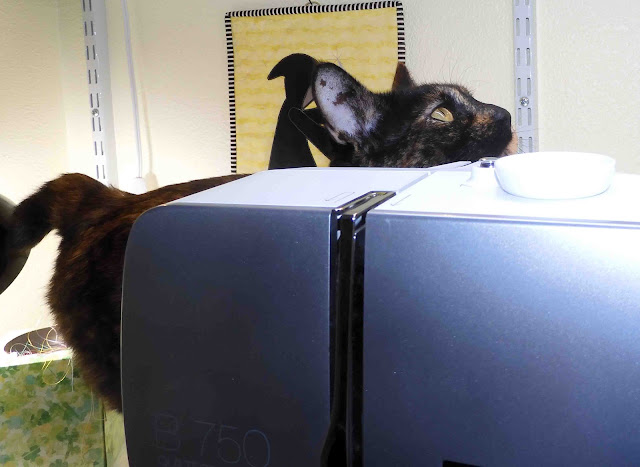 With so much help, I spent hours stitching until I could stand it no more. When just the red and green pieces were left, I took a break. 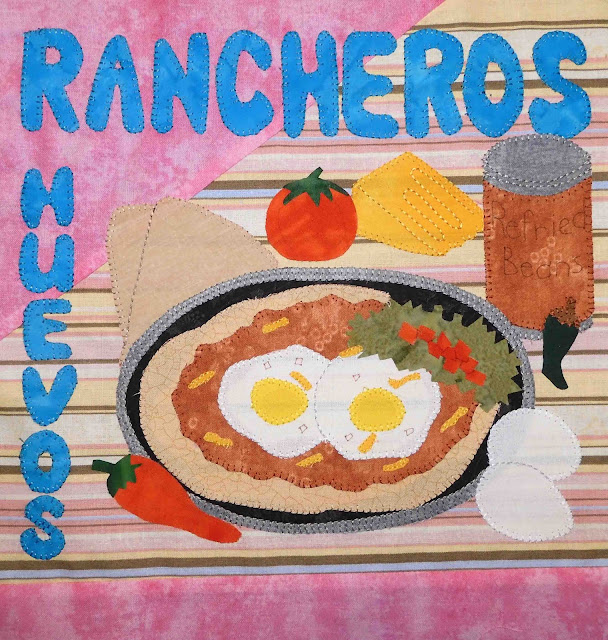 I most wanted to stitch down the "grated cheese" before those tiny pieces could fall off and get lost. 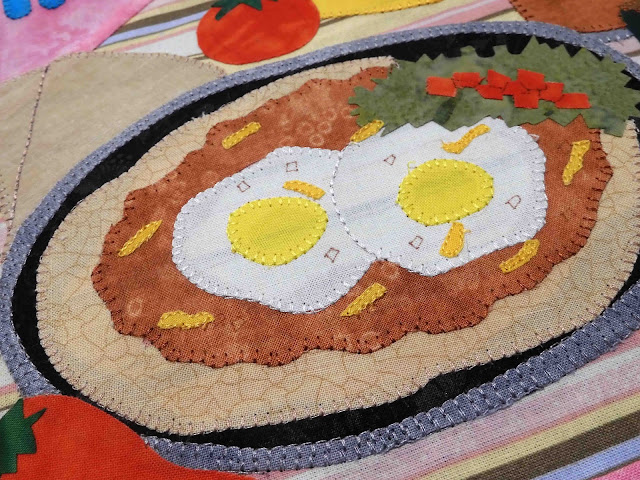 After a bit, I came back and finished the rest. It still needs some hand-stitching, and it needs the fringe added to the "tablecloth." Possibly I'll finish it up today. 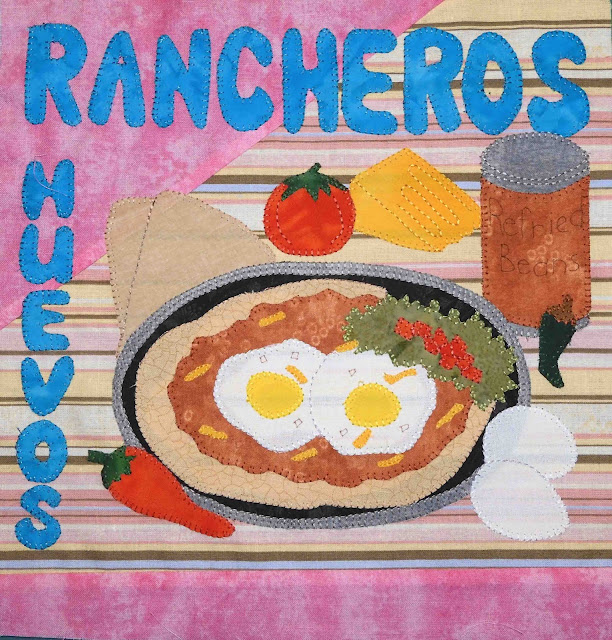 This morning, I'm driving downtown for a dental appointment. What fun, eh? The dental appointment is bad enough, but add in the drive to downtown Portland, and you've planned yourself one heckuva day. I'm stopping off at Erik and Mae's house to deliver some t-shirts I got for Erik's birthday on the 9th. Yeah, we missed it this year. There are a couple of grocery stores along the way--a Whole Foods, and Oregon's own New Seasons Market. I'm hoping to score some chanterelle mushrooms. Chanterelles are only found in the wild, and now is the time they are available, if at all. If I can score a half pound, I'll make our favorite Chanterelle Mushroom Risotto. And if not...then maybe another time.
Supposedly the roofers will be back to finish the job today, although the rain has started up. They removed the dish for the satellite television yesterday, and someone will be up today to reposition it. I expect they'll remove our wi-fi antenna today, and so I may not have internet access for a day or two. If not, you won't hear from me for a few days. I can try using the personal hotspot on my phone, but we don't have a great signal here. Fingers crossed, and hoping for the best. Today is the last day to enter my giveaway. One way or another, I'll be back to announce the winner tomorrow.
Posted by Barbara at 7:23 AM

Nothing`s more determined than a cat on a hot tin roof. ~ Tennessee Williams

What a lovely tomato surprise for you!!:))

Are those purple flowers some type of snapdragons? The flowers look like that --they even remind me of our yellow and white "Butter and Eggs" wild things we grew when I was growing up...

Our trees are finally beginning to turn colors--just a bit of orange tinging to reds--mostly yellows right now.

Today, for the first time, I was able to accompany Tom food shopping using the basket as my support [YAY]..not too bad--just my ankle began shouting a bit...so resting this afternoon...
hugs, Julierose

I think your garden looks amazing, especially considering how late in the year it is. So much color. I also love the look of your Mexican huevos block. Absolutely yummy. But best news is hearing that roofers showed up yesterday and put in a long day and are hoping to finish today. Amazing. I am looking forward to seeing a picture of your home with new roof. Going to be awesome!

I love the maples! Such wonderful fall color.

Your yellow unknown is a nasturtium. They are always bright and cheery! If you notice, there is a spur at the back of the blossom. When we were kids we'd stick the spur into the throat of another bloom and make flower chains. The pink unknown is linaria, also known as toadflax. I suspect this one came from one of your wildflower mixes.

Wow those zucchinis are huge! I guess you could make zucchini relish. I use the recipe from Practical Self Reliance. It has turned out well every time I make it.

The maples in your yard are really pretty. I have attempted to talk my husband into planting a maple tree but so far no luck. He doesn’t like to rake leaves so if he has a tree he wants it to have fruit on it to make raking leaves worth while.

Your fall colors are beautiful, unlike the drab we've had this year. Good to hear your new roof is progressing so well, they will be out of there before long. Amazing that your kitties were brave enough to go outside with all that activity.

Your garden looks lovely I love seeing the red on the trees. Those yellow nasturtiums are looking lovely and they are edable in salads, they ahve a little bit of a hot taste but not chilli hot. I also like the colour of your roof green is a great colour.

Oh, mushroom risotto - I hope you find some! I'm surprised the kitties ventured out too, with all that going on. They do look like they were good helpers as you were stitching - ha! Bummer about the dental visit - yuck, as well as the drive to Portland. Glad you get to see Erik and Mae though!

Your garden continues to provide beautiful things - always so pretty. Glad the roofers are continuing on and now fingers are crossed that all the 'unhitched' things get hitched again.
And brave kitties indeed!!