Sunday was busy. As I mentioned yesterday, we needed to empty out the kitchen slide on the truck camper. It goes in for some repairs on Wednesday. We were also experiencing rain and high winds. There was a lull in the weather yesterday morning, and so we prepared to go out. Just as we reached for the doorknob, it started pouring rain and hail. (Of course it did.) Oh my. So we paused long enough to put on rain gear, intrepid Oregonians that we are. By the time we were ready to brave the elements, it stopped. (Of course it did.) Fortunately, the whole job took less time than expected and the worst casualties were our muddy shoes.

Back inside, I needed to do some housework, and so it was late afternoon by the time I was able to get any sewing done. I was grateful for the time I had, since I'd feared a no sewing day...pretty much a disaster, if you ask me. It seemed as if the most important task was to prepare the background for the next Calendula Patterdrip block. This one: 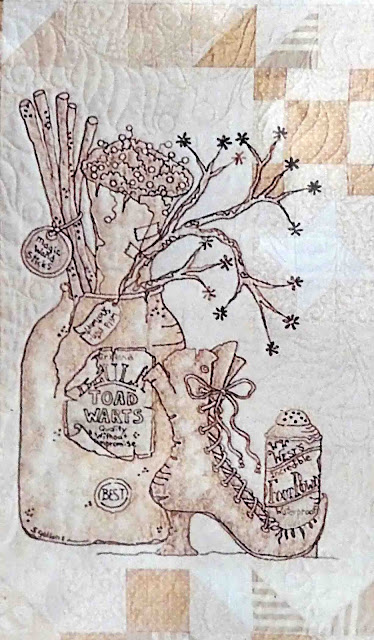 There were some "blanks" to cut from the background fabric, and then I needed to do some piecing. There was this 9-patch: 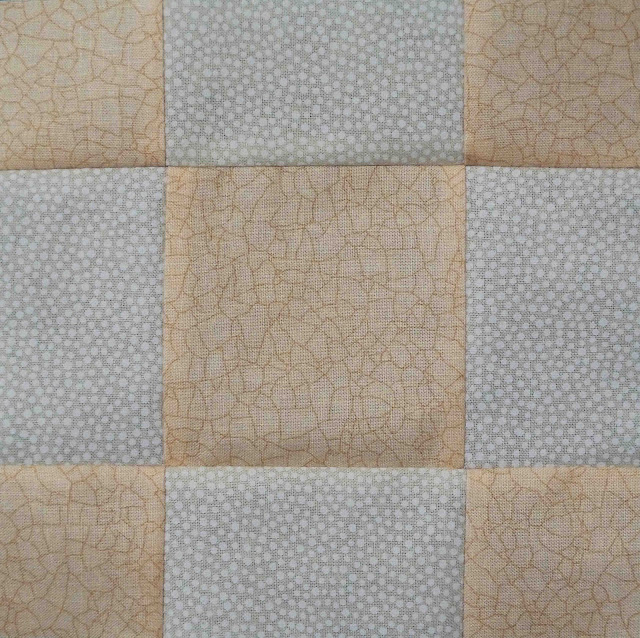 All of this piecing was happening under Smitty's watchful eye. When I started piecing together the Friendship Star, he could see that I was doing it all wrong. 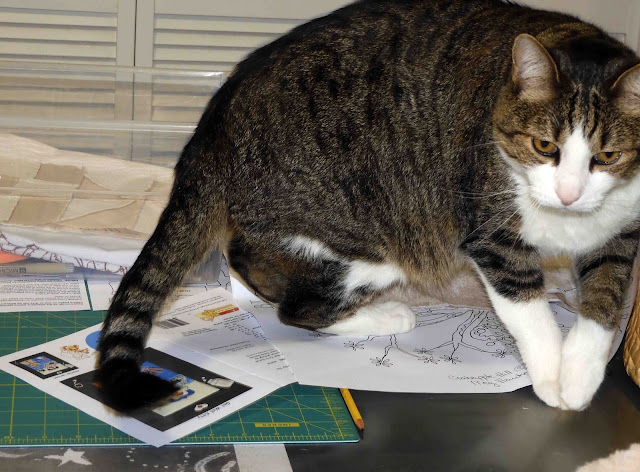 As you can see, Smitty did not help with the unloading of the camper. He's working at keeping his peets in pristine condition this winter. You never know when a paw modeling job might pop up unexpectedly. 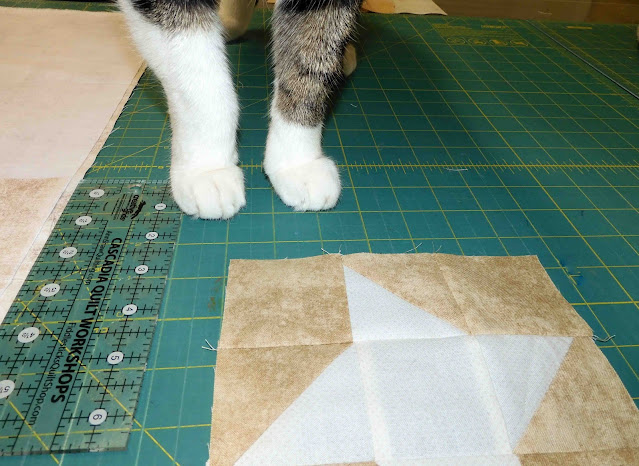 He was worried as he watched me get all those points going in the right direction. 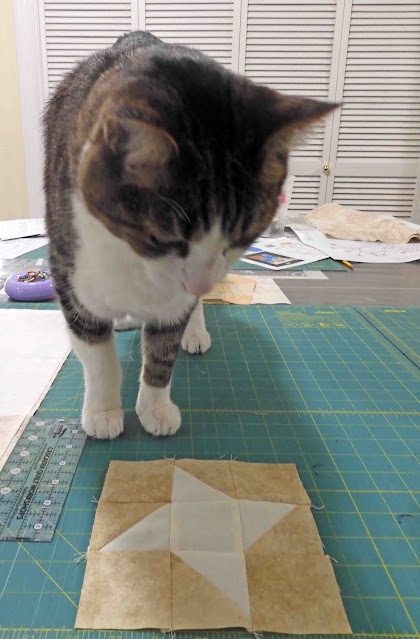 This is giving me a meowgraine headache! 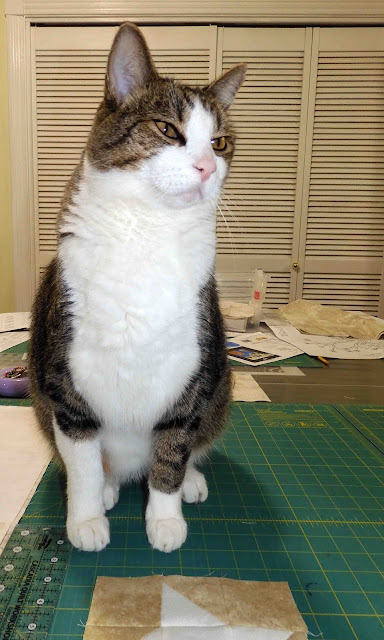 He did appurrove of the final block, even if it did stretch his capacity for patience.
Last, I needed some half square triangles and one flying goose. 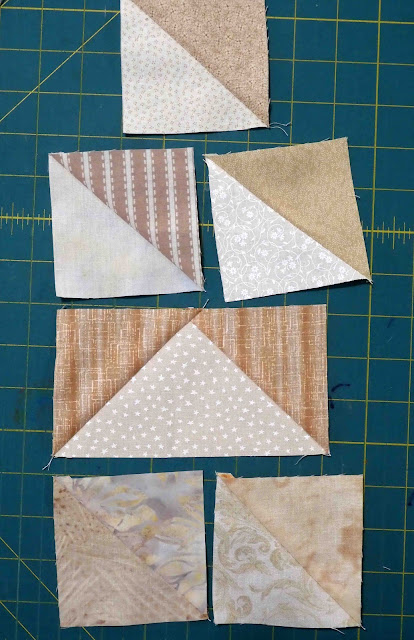 And then I could stitch it all together. 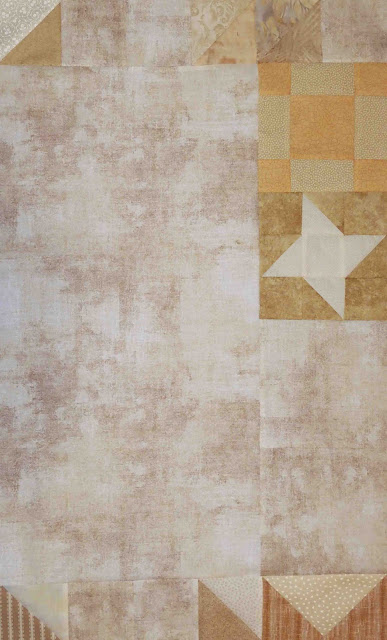 From there, it was ready for tracing. It was about half finished when I needed to stop for the day. 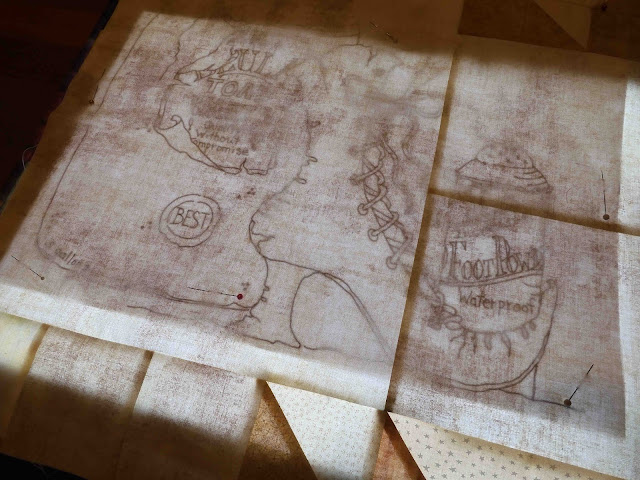 Today will be another busy day. I'm having breakfast with Sue. We're celebrating her September birthday. We missed one another when we both were traveling last month. She arrived home after we'd already left. After that, I'm getting my hair cut. Then, I need to pick up some prescriptions and do my grocery shopping. I don't expect to get home until later this afternoon. Nevertheless, I have leftovers planned for dinner, and so there should be enough time to finish this up. I won't need it for at least another week or so. Where slow-stitching is concerned, it's important to be prepared.
So I'm typing fast this morning. I have the next three days set aside for sandwiching about a dozen quilts. You might remember I planned this for back in August...or maybe it was July...and then it just got too busy. With rain having arrived, it's going to mean shuffling cars around in the garage to make way for my plywood and sawhorse tables. There's always something, isn't there? Quilting is not for wimps. There's still time for this morning's round of slow stitching, and that's where I'm headed next.
Posted by Barbara at 6:51 AM

Into each life some rain must fall, some days must be dark and dreary. ~ Henry Wadsworth Longfellow.

Reading about your on-again,off-again rain situation reminded me of a children's book by Robert Munsch called 'Thomas' Snowsuit' - only his issue was having to pee!
Good for Smitty for doing such a primo job of kitty-vising because the piecing turned out beautifully.

We are very rainy on this coast as well. I haven't done any handwork in months and have tons of projects.

You haven't let the dust settle much after getting home! Glad Smitty was on hand as you put those stars together, making sure you got all those points going the right way and avoid having to rip! We have chilly weather here, but are stubbornly holding out turning on the furnace until Nov. 1st (it's a thing, not sure why?).

We had torrential rain yesterday, but today is sunny and chilly. I can see you playing hokey pokey with the cars. Been there and done that many times in my life. Smitty is a patient helper.