We're moving on to Bloomfield, New Mexico, this morning. It's located in the northwest corner of the state. We have a couple of sight-seeing items on our agenda. I'll say more about that as it happens. We're also going to replenish the food supply and visit a quilt shop. I have it on good authority (aka The Google) that there are three in town. I've already selected the shop of my desire.

So, yesterday was our last day in Silverton. We did some laundry, and walked the streets one more time. (You knew all along that we were streetwalkers, didn't you? We carry a sign: Will "work" for funnel cake.) It was a chilly, but bright and sparkly morning, and it was a nice walk. Here are some things we saw. Isn't Silverton a cute little town? 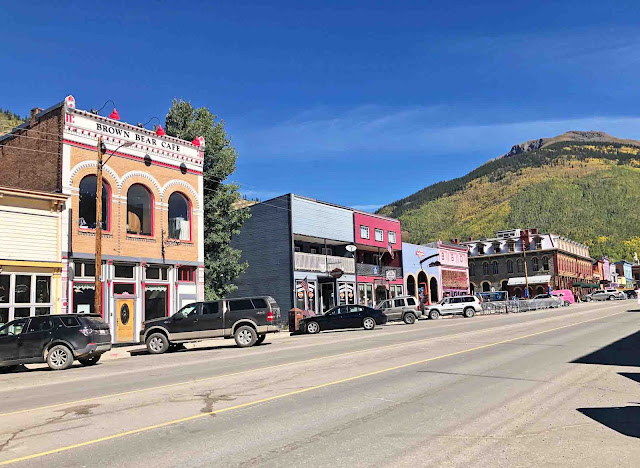 It's economy is based almost entirely on tourism. You'll find gift shops, galleries, restaurants, ATV and Jeep rental places, a few RV parks, one gas station, one hardware store, and one small grocery store. It's barely enough to sustain the people who actually live here, although I can well imagine they are a close community.
We just walked along, and I took some pictures of things that caught my eye. Here's a fence made from wagon wheels. 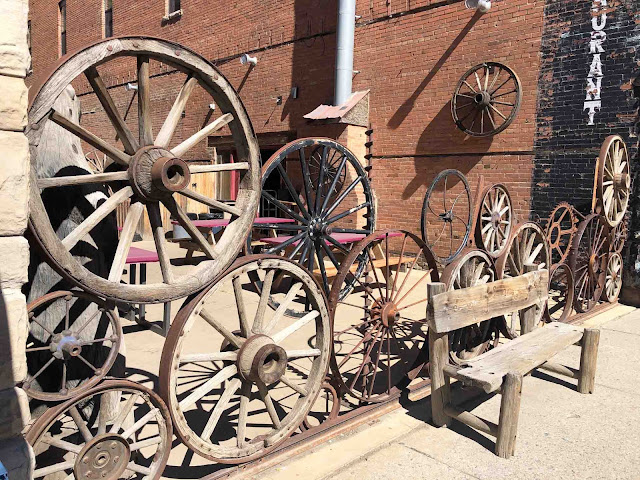 This was in a little garden/alcove/tiny park. It has a small tree growing out from where the engine once was. How long do you suppose it has been sitting here? 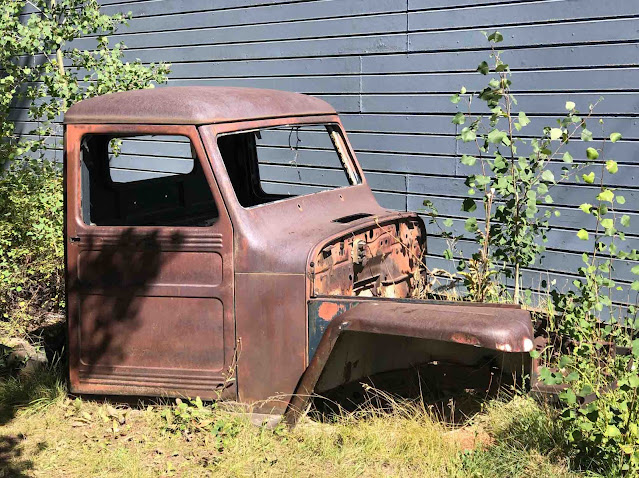 I was in serious need of this shot glass I'd passed by on our first visit. I chose one more Silverton specific instead. The next day was our ride to Black Bear Pass and my close brush with altitude sickness. While I was sitting there feeling faint, I thought of this shot glass. Obviously, it had to be mine. 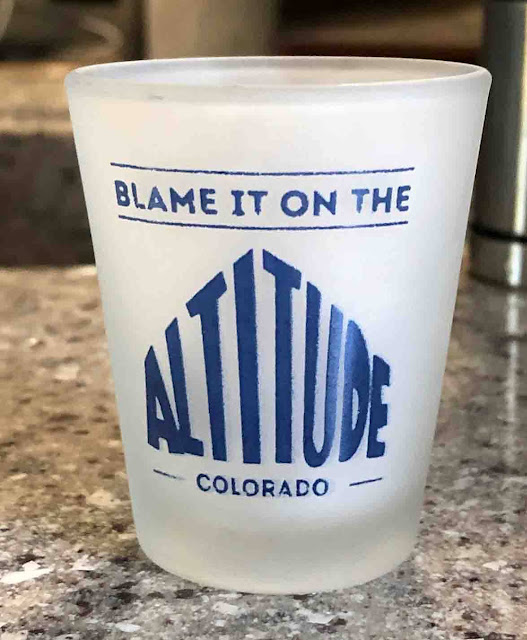 It only took about an hour to walk up one side of the street and down the other. Our last stop was this little grocery store. We needed some basics, and we were able to find most everything on our list. 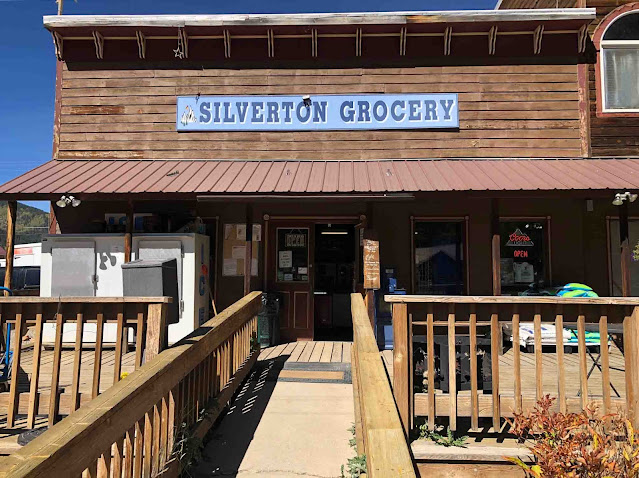 Also, we passed by this sign discussing the history of the place. The left side of the sign had a bunch of statistical information that wasn't particularly interesting. This right side, though, covered some of the things I've wondered about in my posts. Pretty interesting. Take a look. 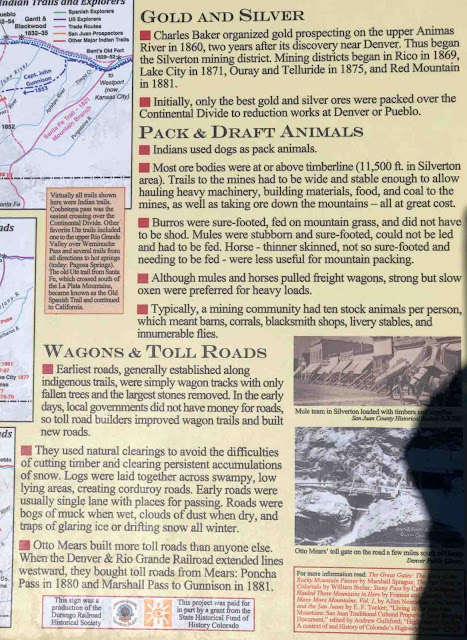 When we got back to the camper and had things put away, I headed to the laundromat, made lunch, and then we got Smitty out for a walk. He was yipping and yiping and jumping around and acting as if walking was the only thing that would soothe his tortured self. He even stood still while I put on his harness. You should know that harnessing can never occur until he's thoroughly fortified his courage by scratching long and hard on his scratching post. (I might try this in the future when I have to go to the grocery store.) You might say that it's Smitty's way of girding up his loins. 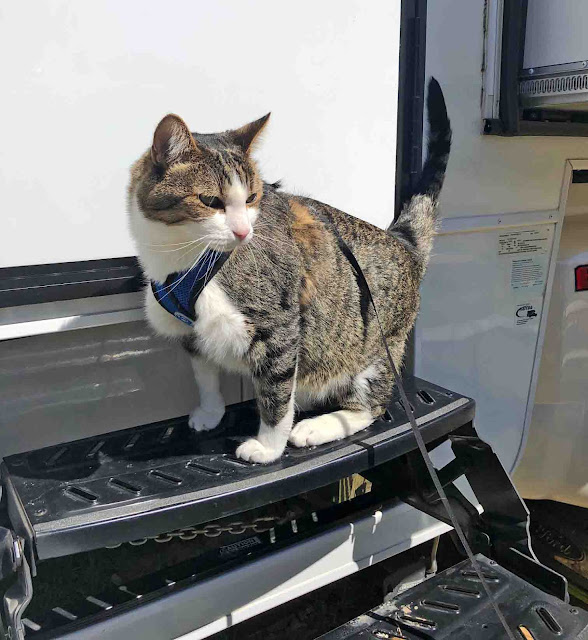 All of this preparation takes approximately five minutes. The walk lasted all of 90 seconds. Yeah...no treats of valor for you, Buddy. 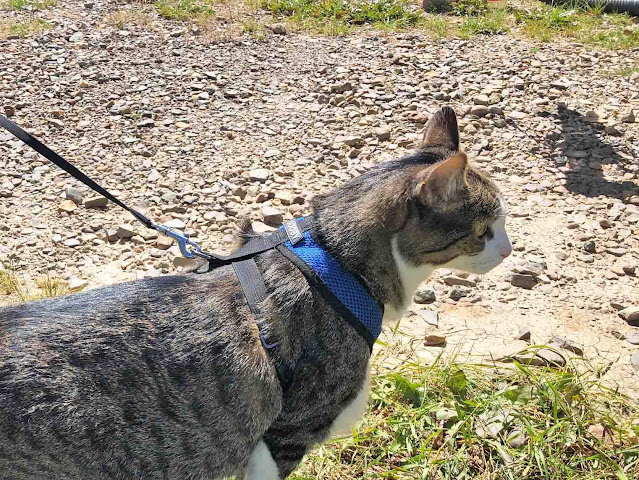 We spent the rest of the day lazing around. It was a good way to spend the afternoon. Later on, Mike rode back into town to get the promised final funnel cake. It was a hard choice. I was inclined to get the Black Forest one: cherries, hot fudge, and powdered sugar. Instead, we went for this "Turtle" variety: caramel, chocolate, pecans, and powdered sugar. Mmm, mmm, mmm. 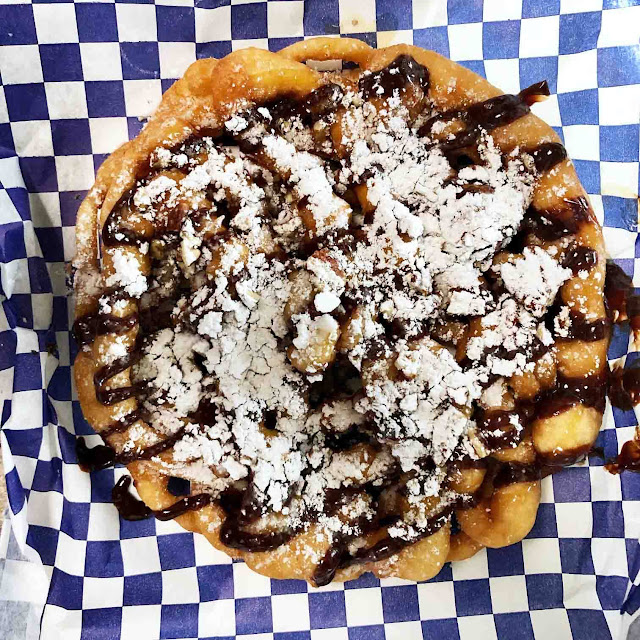 Okay, so driving days are necessarily short post days. We're traveling some more of US Hwy 550 and straight through Durango. (We visited Durango on our last trip to Colorado.) After that, it shouldn't be long before we cross the border into New Mexico. Until we pass through Durango, we'll be traveling the San Juan Skyway Scenic Byway. Here's an image of the full loop I swiped from the website.

Now here's something interesting...to me, anyway. On our last trip to Colorado, we traveled the section of the loop from Durango, and toward Mancos and on up to Placerville. We didn't plan it this way, but this trip will take us on the section from Ridgway to Durango. And so by sheer happy accident, we will drive almost this entire 236-mile loop.

So...even though this is a driving day, it should be scenic and interesting. It's one of the byways listed in the National Geographic Scenic Highways & Byways book that I carry with us when we're traveling. 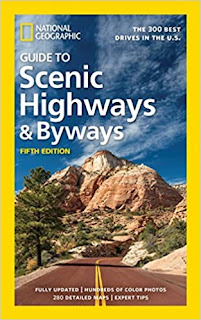 You just never know when you're going to need a guided tour of something unexpected. And all of that to say that I should have some good pictures and lots to tell you by tomorrow.

I dreamed night after night that everyone in the world was dead excepting myself, and that upon me rested the responsibility of making a wagon wheel. ~ Jane Addams

You covered more of Silverton than we did when we were there. Missed the funnel cakes entirely, darn it! That turtle version looks delicious! Safe travels!

I am really looking forward to "the rest of the story" as you relocate to New Mexico. I have friends in Silver City and they love it. Be safe and my kitten Jake is sending purrs and headbumps to you and yours!

Susan from the California Desert

My father-in-law used to live in Ridgway. After a few visits, I started staying home and blamed it on the altitude.

That funnel cake - oh my goodness. Not a calorie to it!!! Have to say that my heart skipped a beat I'm sure when I saw that amazing wheel fence.