We've moved on to New Mexico and we'll start ticking off locations on our sight-seeing agenda for the next week or so. Backing up to yesterday morning, I was able to finish up the 4th thimble. None of these have been pressed, and they still have Sticky Fabri-Solvy on them. I probably won't have a chance to rinse that out until we get home. 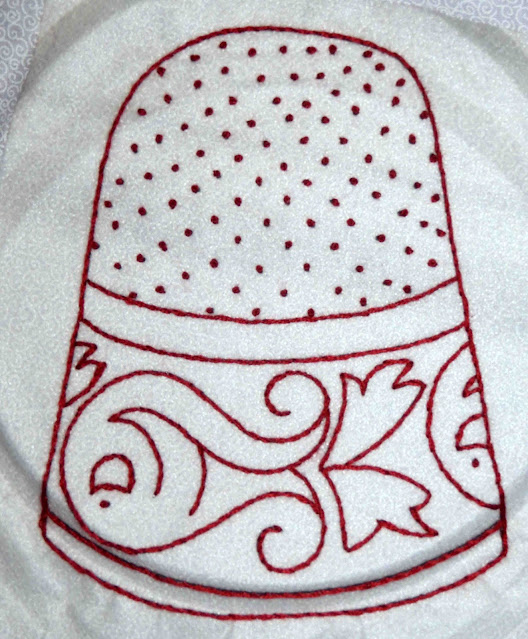 When it was time to go, we had to reload the ATV's onto our trailer and then hitch-up. Smitty snoopervised from the back window of the camper. 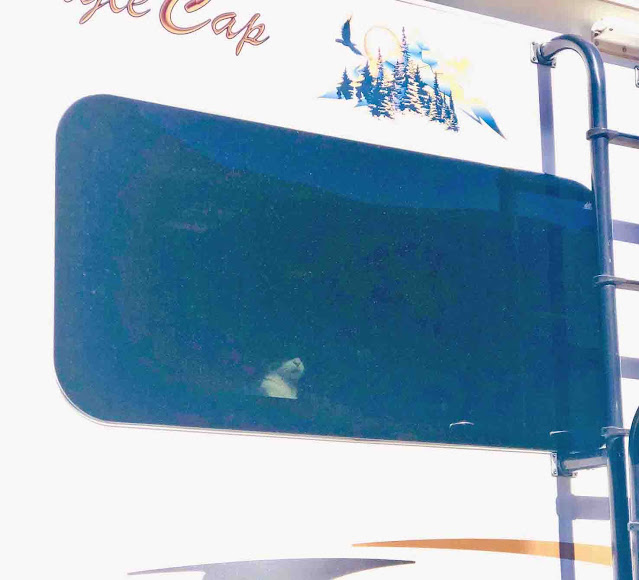 The trailer was parked in an open lot between the RV park and the railroad tracks. As we were working, we noticed about a dozen of these single-person (or maybe two people) cars heading down the track toward Durango. Apparently the train wasn't running because they were using the same tracks. 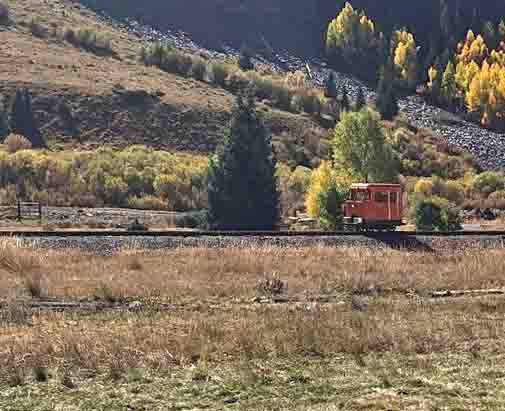 When we were locked and loaded, we headed on down the road. The scenery was spectacular, as expected. I took this picture of Molas Lake out Mike's window. Sorry about the glare on the window. It was hard to avoid. 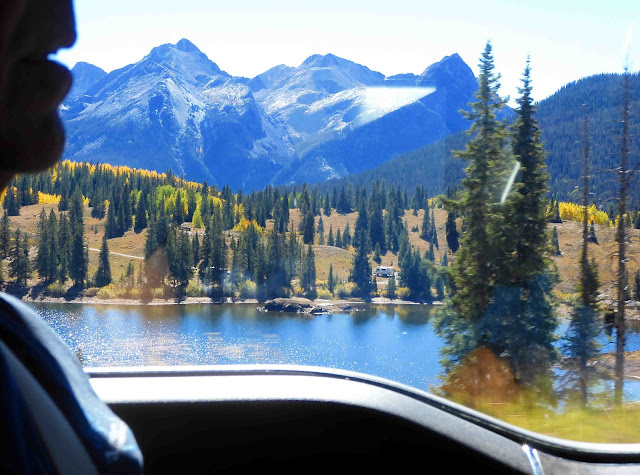 Ahead was a towering peak, but none of these peaks was as high as some of the ones we summited on our ATV's. "Summited." Makes us sound kind of badass, doesn't it? 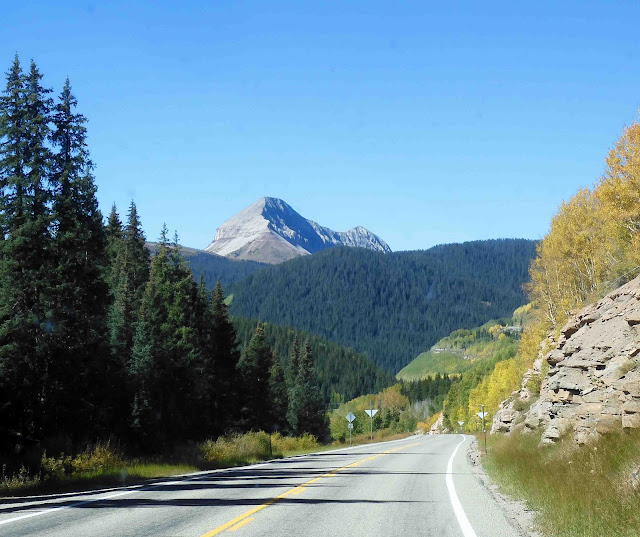 We paused at a scenic overlook to check the tie-down straps on the ATV, and we were treated to this pretty view of the Animus River valley. 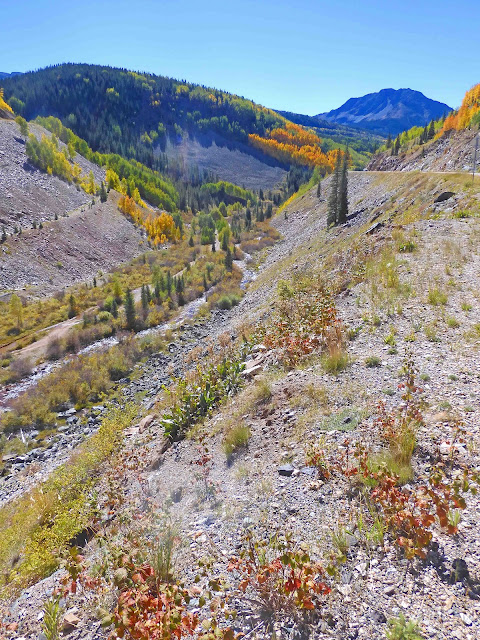 There were a lot of pretty barns...so pretty, it was hard to believe they housed livestock. Most of them were hidden behind trees or other structures, and I wasn't able to get pictures. I was able to capture this little structure on the far side of a small lake. 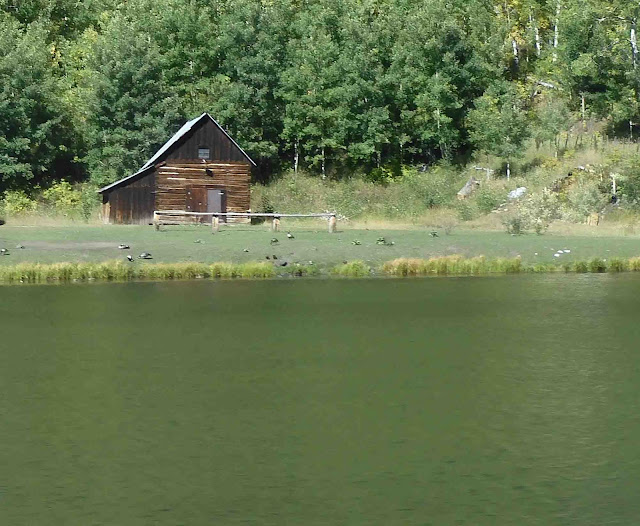 Here's one of the barns, although this one isn't as fancy as some of the others. 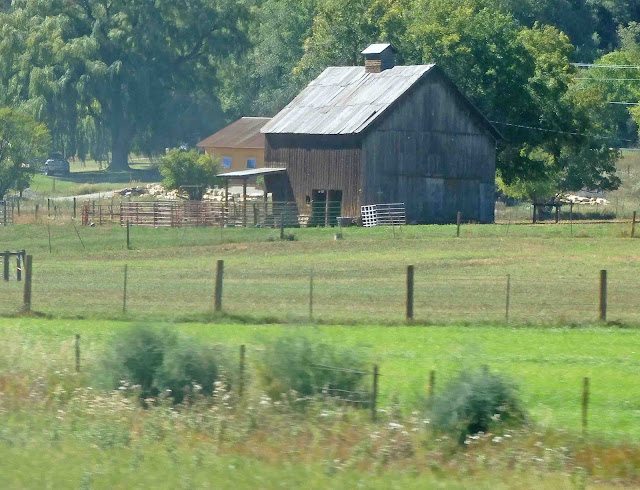 It was only about 100 miles to our final destination, and we crossed the border into New Mexico about half way there. 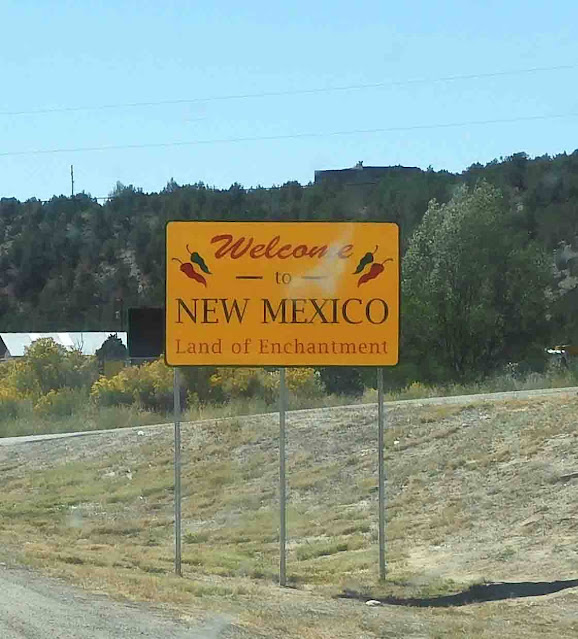 When we arrived, Smitty was quick to get out on the catio to see what's what. Later, he got out for a walk. There is no grass here, but there was a nice patch of dust where he took a long and luxurious dust bath. 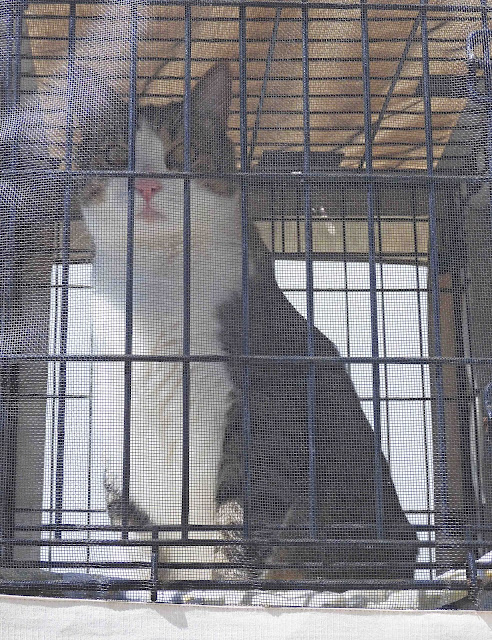 Sadie waited for Smitty's report before venturing out onto the catio herself. 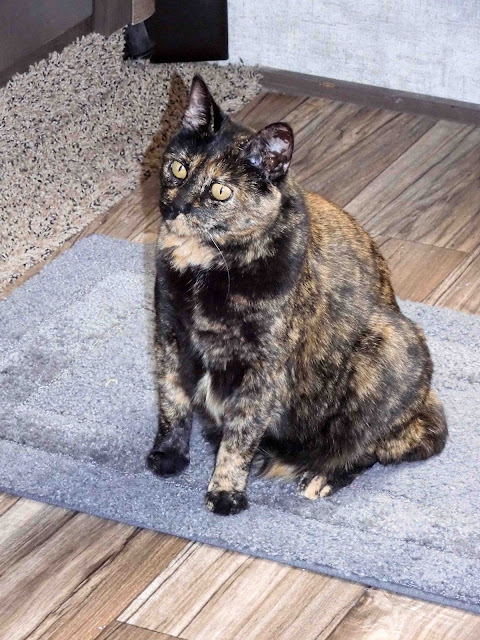 So it was a short day of driving, and there isn't much to report. We have four nights here in Bloomfield. Today will be a grocery shopping and quilt-shop-visiting day. Tomorrow we'll be heading to the Chaco Culture National Historic Park. On Saturday, our destination will be the Bisti/De-Na-Zin Wilderness Area, which is Bureau of Land Management territory. Both destinations are some miles down unpaved roads, and so their distances belie the time it will take to get there.
I'll take pictures of anything that catches my eye in town today, and of course, I'll tell you about the quilt shop in tomorrow's post.
Posted by Barbara at 4:31 AM

I compare myself to a good barn. You can have a good barn, and if you paint it, it looks a little better. But if you take the paint off, it's still a good barn. ~ Dolly Parton

Nice views on your drive, and I look forward to hearing about your adventures! Those thimble blocks are so fun!

Awesome scenery on your drive. That mountain peak is stunning. I'm amazed where you are at has not one quilt shop, but three. Enjoy your stay in New Mexico. And I hope Smitty gets a couple of warm and dry dust baths. Oh, I love your thimble too!

Smitty's dust bath reminds me of someone I used to know (who lived in NM for a while) who said that enchantment was just a euphemism for dust.

Friends of mine grew up in Silver City, NM. Instead of the "Land of Enchantment", they refer to it as the "Land of Entrapment" for highway patrol antics in years past! Hahaha!!!

Wonder if those little cars might have been a tourist thing....perhaps people could rent them? As always, your photos are fascinating and of course you know I love those barns!