What a dismal day yesterday! It rained the whole live-long day, for one thing. I did some slow-stitching in the morning, and then did some housework. After lunch, I turned my attention to the binding for the farm quilt. I'm limiting myself to two lengths of thread, but still managed to turn the first corner. 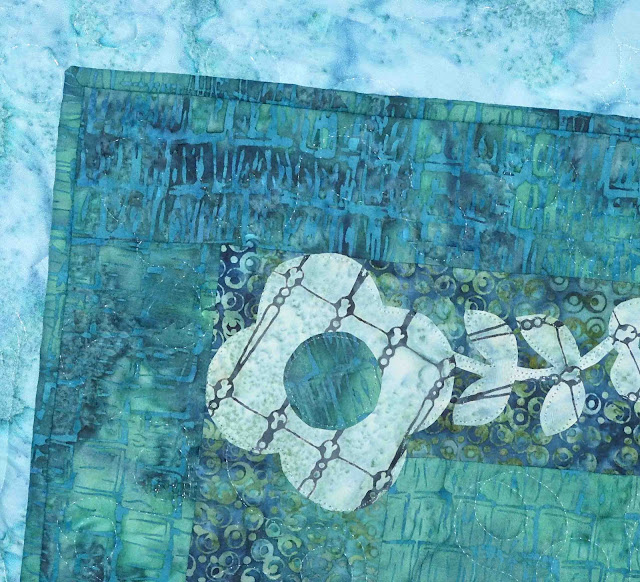 As I was folding it up, the power went off. It was around 2:30 p.m. Okay, so that pretty much put the kibosh on anything else I might have had planned for the afternoon. Thank goodness I finished my housework!!! So, anyway...a little power outage can't come between me and my slow-stitching. I had a full charge on my rechargeable headlamp, and so there was just one thing to do. I sat and stitched, and stitched, and stitched on Calendula Patterdrip until I finished the section I was working on. 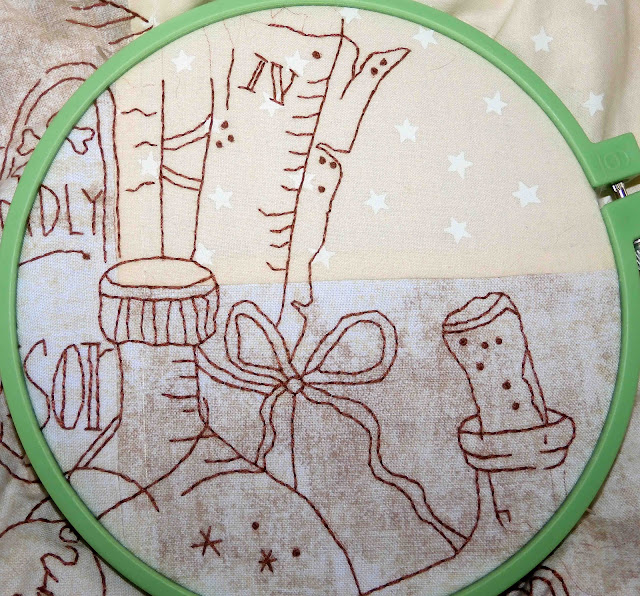 Meanwhile, Smitty sat outside the window on the wood box, willing the weather to improve. 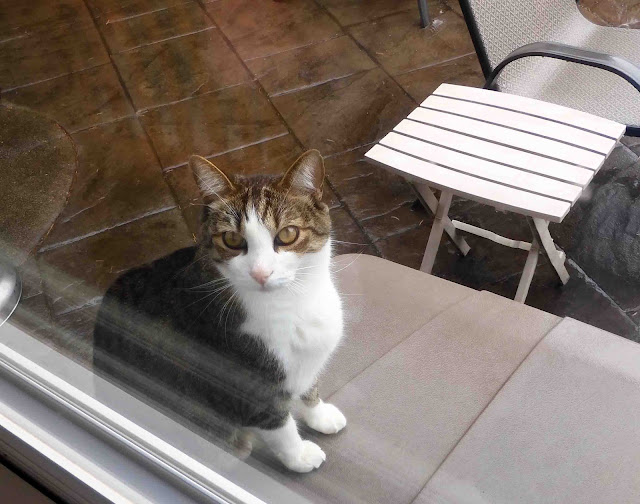 The fattest squirrel you've ever seen sat nearby, mocking him. Oh, the humanity! 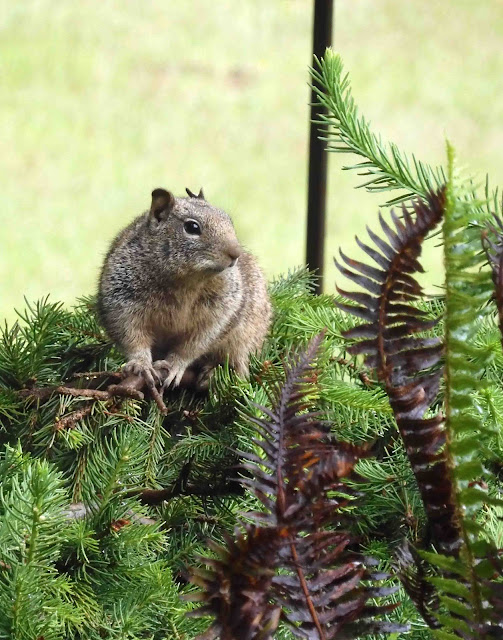 I just moved my hoop and continued on, filling in the next section too. 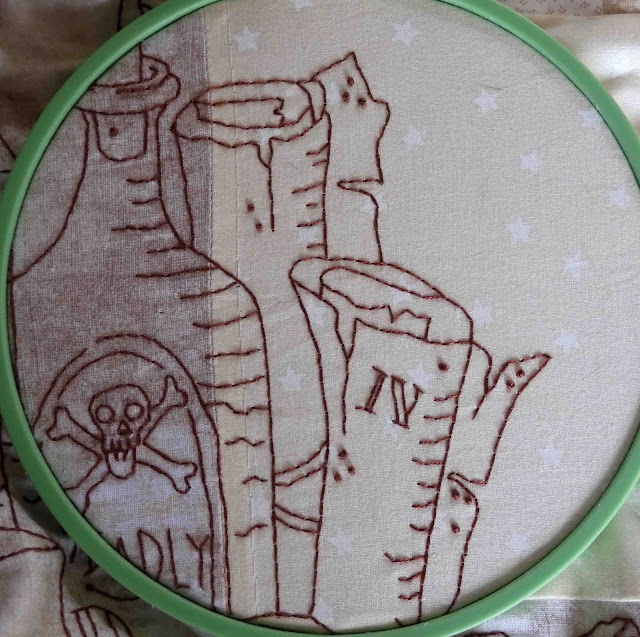 Now I've moved my hoop down, and to the left, and I'll pick it up there this morning. I think I'm about halfway across the third block for this quilt. We're heading to Eastern Washington tomorrow morning, and this will be a good take-along project. Even if I finish the third block, the fourth one is right there for me to start on. 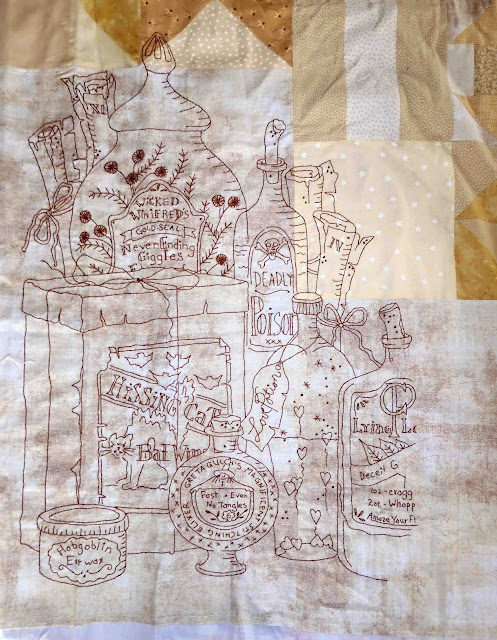 Okay, so the day was kind of a bust. We ended up going out for dinner since we didn't want to open the refrigerators. The power outage was caused by some limbs falling on power lines. There was a severe ice storm in our area this past winter, and there are dead limbs hanging from trees everywhere. With so much rain, they've been heavy with moisture, and now they're falling down and causing a different kind of trouble. The power came back on around 9:15 last night...right after Mike started up the generator. (Of course it did.) I worried with so much slow-stitching that my thumb would be punishingly painful today. As insurance, I splinted it last night, and it feels fine this morning. Apparently, no harm done.
So today I'll be packing the truck camper and doing some cooking. Recently, I found a leftover half package of Jimmy Dean sausage in the freezer. The only thing I ever use that for is Frozen Breakfast Burritos, and so I'll make some of those today. Heck, I even have half a jalapeno pepper to use for the same dish! It's almost as if it were meant to be! That will be breakfast for the next few days. Also, I'm making a favorite sandwich spread from Giada DeLaurentiis. I love her Curried Chicken and Apple Wraps. Those will keep us in lunches for the next few days. I have some frozen entrees to take along for dinner as well. We'll have steaks one night, and so I'm making my favorite marinade ahead of time. I just pack it in a jar, and then pour it over the meat when we're ready for it.
The food will be pretty easy for this trip, and it's just a few days, so there won't be much else to pack either. The kitties are staying home this time around. I've left strict instructions that there be no mouse parties. They are to lay off the catnip, and absolutely no meowargaritas. Cats these days.... You have to stay tough as a cat mom.
We're heading to a place in eastern Washington we've never been, Palouse Falls State Park. We read about it...somewhere...I can't remember where. I've seen some spectacular photographs of it. Here's one from Creative Commons. 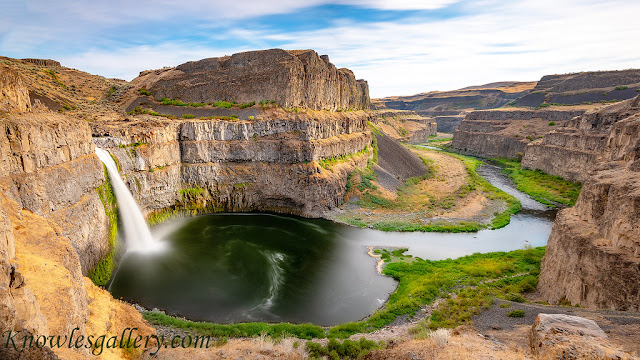 (Image credit: "Palouse Falls Eastern Washington" by Knowles Gallery is licensed under CC BY 2.0)
You can see another one at that link I've given you. Visiting in May or June is the best time of the year when the snowmelt is still strong, and there's plenty of water flowing. And so, I'll be taking a few days off from blogging. I'll be back later in the week to tell you all about it. Until then, stay strong and sew on.
Posted by Barbara at 7:46 AM

Yesterday in all that rain my oldest grandson graduated from Mountainside High School. The kids had different colored gowns by the time they were handed their diplomas. Because of limited tickets my husband and I watched from the comfort or our home as they live streamed it on YouTube. That is a good thing that came from the last year. When the choir group he is in preformed it was raining really hard and I felt so sorry for him. My poor son and DIL sat in the bleachers with an umbrella. Later we all met at the house of Ramen in Beaverton for a celebratory dinner. One of my grandson’s favorite places to eat. Since he leaves for New Mexico State in August we are trying to spend some extra time with him. However the drive from our house to Beaverton and home again was very wet with many accidents. It took us about 35 minutes from the top of the hill at Slyvan to get to the Jefferson exit on the way home. You know you are in trouble when you get passed by four tow trucks. Made me really glad I am no longer doing that commute everyday.

Good luck on your trip;))) Hope you have good weather...
We finally got a .31" of rain this morning--not a whole lot, but better than nothing!!
Hugs julierose

Been away from blog reading for a few days while on a quilt retreat. Lots of quilting and laughter and catching among people who haven't seen each other in almost a year (we did squeeze in a few meetings between lockdowns). Sorry you can't share all that rain with those of us who need it. It is raining today for the first time in 4 weeks. Anyway, I got a few chuckles reading your last few posts and hope you have a good couple of days on the road. Maybe you need to install a hidden camera to make sure the kitties follow your no mouse party rule.
Pat

Have fun on your trip, that park looks pretty interesting. Raining here again today, no watering or lawn mowing for us, but the guys who cut our hayfield on Friday and then left it for the weekend instead of baling yesterday when conditions were perfect now have a mess of useless hay on their hands.

I wish we could blend our weather. Here in Denver it is hot hot hot, sunny, and dry. Some of my condo balcony garden plants don't do well in that kind of heat. Your trip sounds interesting, enjoy. Maybe the weather will improve while you are away.

Have a good trip and I hope the weather is good. Your teaser picture of your destination is interesting and can't wait to see your photos.

I'm sure you will have a wonderful trip away. And I must say, I've been drooling over the food you are planning to take, never really used wraps before though. I could imagine the breakfast ones done with bacon and egg. I'm never quite sure what sausage means in USA, is it the same as our uncooked sausages perhaps, or something more spicy like a chorizo I wonder?
Hopefully your Cats will behave themselves while they are at home, no doubt they will be looking for kitty treats the moment you return.

We just had a generator installed and what an ordeal it was! We also had to get a propane tank and the propane installer cut the phone line. We have the absolute worst phone company on the planet and were without phone service for almost 3 weeks. Now Chris and I are having to trench the new line (600') ourselves because we can't get the phone company to respond. I figure that no we will never lose power again and will have gone through this ordeal and expense for nothing. LOL Have a great trip and rest your shoulder. I've been dealing with a lot of tendonitis in my hands from overdoing the crochet. It's really hard to rest.

What a purrfectly fun post. Wish I lived closer, as besides having fun quilting with you, I'd be delighted to help care for your cats when you go off on a trip. On the other hand, you might not be happy when you learn I served them meowargaritas! Have fun on your getaway. I look forward to seeing pictures and hearing more about it.

I am about half-way through the book Nomadlands (no doubt you have heard about the movie). I was surprised when I started the book to discover that it is NON-Fiction. It is fascinating reading about Americans who travel the country in RVs and Vans because they can't afford homes or lost everything in the crash. I started to wonder if you have ever found yourself camping alongside them? Many of them take jobs as :camp hosts"as well. Somewhat a disturbing read. I'd be interested in your observations.

Enjoy your trip - be safe!

Glad you got the power back on. Hope you are having fun on your trip.

Meowseparties! love it! KILL THEM ALL BEFORE WE GET BACK, sweet kitties, and clean up the debris left behind!