A Solution and a Finish

Hey there, email subscribers. And to my fellow bloggers, I believe I've found the solution to the Feedburner problem! I've tested it myself, and it appears to be working. Recently, I was contacted by someone from Follow.it. This is a service where followers and emails are unlimited, and it is free. Already, I've added a "subscribe by email" gadget to the top of my left side bar. Those of you who are already receiving emails should continue to receive them. The folks at Follow.it helped me import my subscriber list, and you should begin receiving emails with this one!!! If you don't receive it...and honestly, how would you know?...simply sign up again using the gadget I've given you.

And here's something else: if you want to receive them as you always have, you'll need to do one more thing. Go to Step 3 of the sign-up, and check this box: 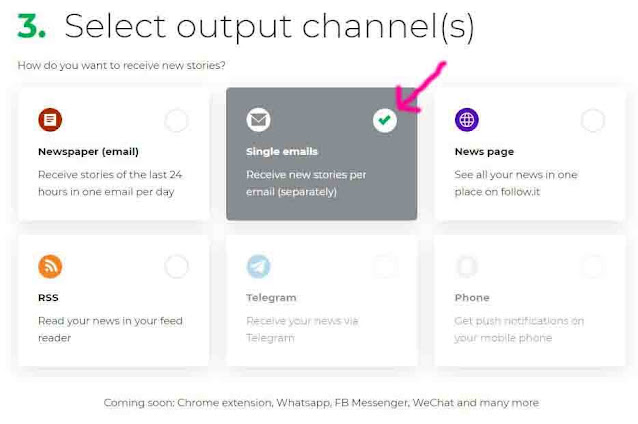 Fingers crossed this will work. To my fellow bloggers looking for a solution, go to Follow.it and sign up. The folks there were very helpful and responsive to my questions, and they helped me with importing my subscriber list. Give it a try and see what you think. I found myself wondering why this is all free, and I think it's because ads will appear at the bottom of emails that are sent out. It's okay by me, and I hope you readers won't mind. This is the best solution I've found in my wanderings, and it's what I'll stick with, assuming it all works as expected.
Okay...enough of this tiresome business. On with the quilting. I made my way into the quilting room late in the day, but there wasn't much left to do on the Poppy Mosaic. I finished up some small sections of the blue sky. 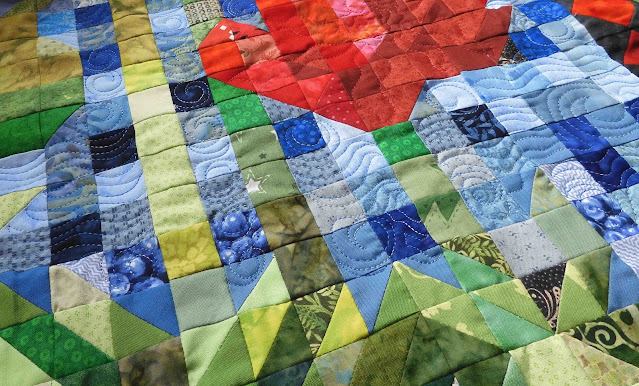 From there, I switched off to a variegated green thread. 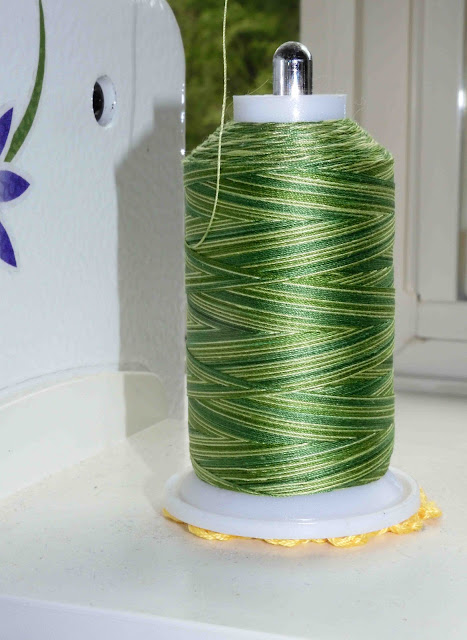 The green sections at the bottom of the quilt made it hard to discern leaves from grass. Where it appeared to be a leaf, I quilted in the veins of the leaf. 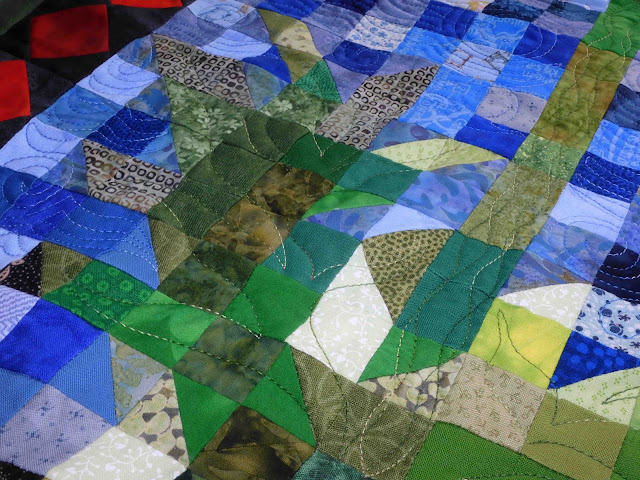 With so many swirls already in the sky, I opted for some wavy lines extending the lengths of the stems. 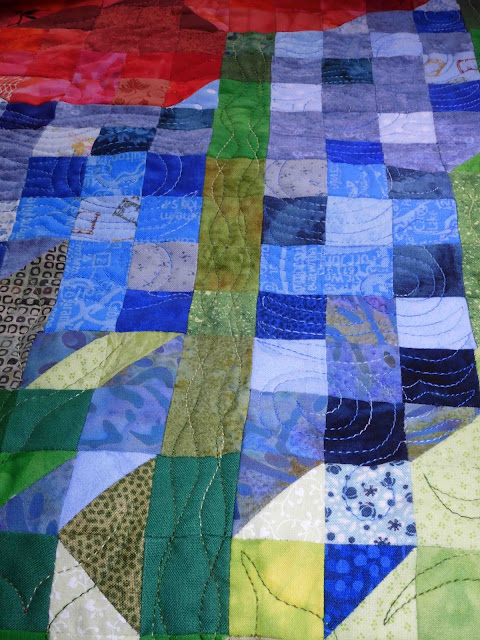 Some curved lines for the oval flower buds. 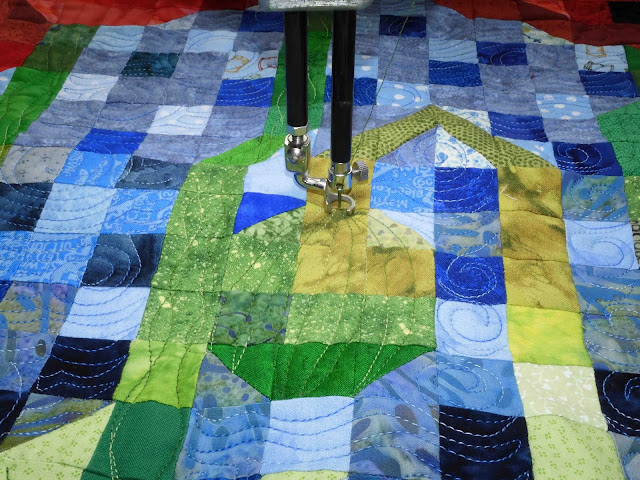 And then in the sections that were solidly green, I quilted in blades of grass and a few weeds. 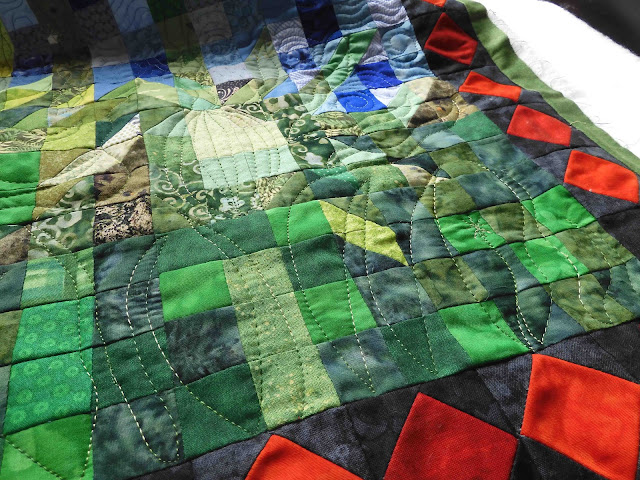 The green sections went pretty fast, and so I switched back to the red variegated thread. 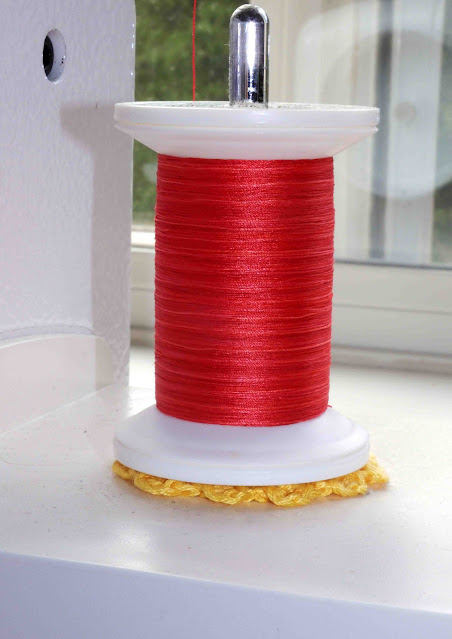 Then, I quilted the red diamonds in the border like this: 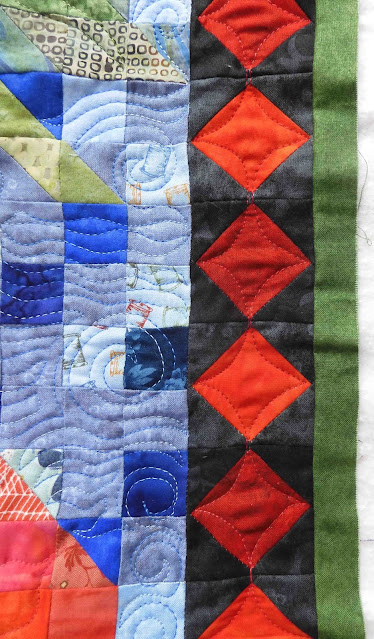 I'd planned to quit before finishing the border, but then I just kept going until it was finished. Taking it off the machine, here's how it looks: 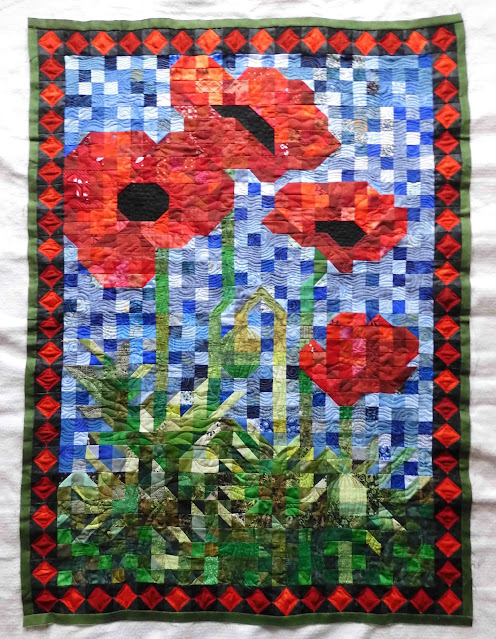 And here's how it looks from the back: 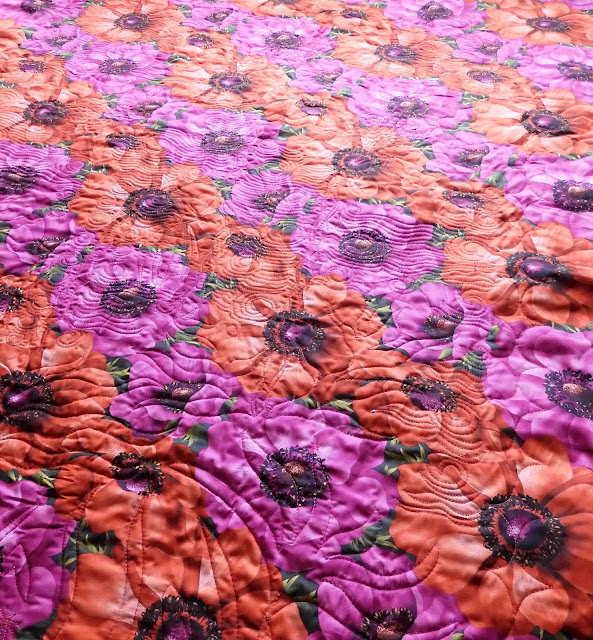 Do you think I could get any quilt inspectors in for quality control? No. They are striking for on-time dinner after yesterday's near-starvation debacle. I believe the number of treats dispensed during the day was also included in their list of grievances.
As for the quilt, all that's left now is to square it up and add the binding. It seemed perfectly appropriate as I was taking these pictures that a rainbow occurred outside. 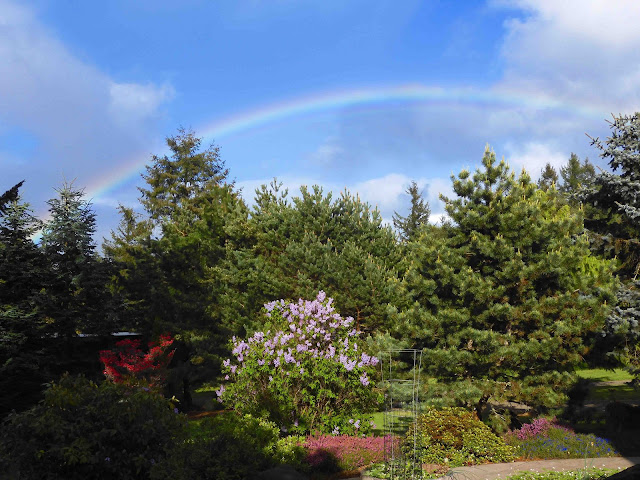 There's just one more thing I wanted to tell you about. I tried a new recipe from our diet yesterday. I didn't take a picture of ours, but here's the picture from the website: 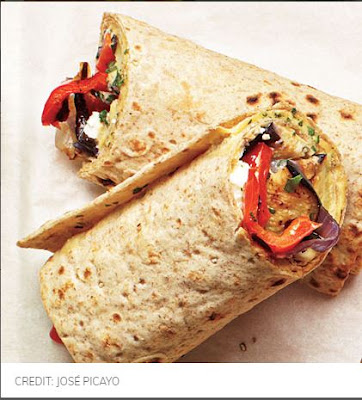 These are Grilled Veggie and Hummus Wraps. These were so simple to make and really tasty. We had enough left over for lunch today. I made them pretty much as the recipe says, but I used sun-dried tomato hummus instead of plain hummus. I just like it better. Also, I had crumbled goat cheese already open, and so I used that instead of feta. (I often substitute goat cheese for feta. The flavor is less biting.) And then I used the large burrito-sized flour tortillas rather than flat bread. It was simple enough to make in the RV, and so this recipe is a keeper for sure.
Today is Mike's birthday. I'll be making his beloved Eggs Benedict for breakfast. Aside from adding the binding to the poppies, there's nothing else on my agenda for today. However, I have a 25% birthday discount coming to me from my favorite local quilt shop: Boersma's. I believe I'll pay them a visit today. It's a good time to pick up backings for any quilts that need them, and so that's what I'll be doing.
Posted by Barbara at 6:56 AM

Life is about dancing in the rain while the sun sings its music and the rainbows deliver hope. ~ Mimi Novic, Brilliance of Dawn

Ha! Figured it out. Now to get off Feed Burner so I do not see your page from there. (Which is an error page). Lovely stitching and finish.

I am loving that swirl-ey blue quilting a lot--this is such a pretty piece.

That veggie burrito looks excellent--I may have to try that --altho--I am not a huge "wrap" fan--mostly they taste to me like cardboard!! Perhaps I am not buying the right brand?
Anyway--we are trying to find new healthier recipes with Tom's gut problems...
thanks for the recipe...hugs, Julierose

This is a really pretty quilt. The stitching designs fit it perfectly too.

what a yummy post. Thanks for the recommendation for the veggie burrito. I definitely want to try it. Your poppy quilt is gorgeous. I love all the FMQ you stitched to perfectly compliment the quilt. Happy Birthday to Mike. Enjoy your quilt store shopping. And THANK YOU for finding a solution to feedburner. Yippee.

The poppies are quilted beautifully! And that wrap looks delicious. Thanks for the recommendation. I will try it.

I got a msg from follow-it as well. I will wait to see how it works for you before giving it a shot. Congrats on the quilting finish - now we count the binding corners. Everyone is showing rainbows - none here so alas no gold to be found.

Another blogger uses follow.it... too many adverts for me so I will continue using bloglovin. I seem to get your posts earlier with bloglovin than feedburner so that's another plus!!!
Enjoy the birthday meal.....
Love the quilting on the poppies

I received the information and I'm signed up to receive your posts with the new site. Thanks!

Got the notice from follow.it and confirmed. We'll see how it goes. The poppies mosaic looks good. Nice to have another quilted. And what a lovely rainbow. All we've got is gloomy skies, rain and unseasonable cold which I guess is to make up for the week of unseasonable warm we had in early April.
Pat

I follow your blog via BlogLovin too so no issues for me. Hopefully nothing ever happens with it because I'd be sunk because that's where I follow everyone. Hope Mike has a great Birth Day...and....I do love that poppy quilt!!

Thanks for the solution. I'll be checking it out very soon. ~Jeanne

Love your swirls in the sky, like Van Gogh's Starry Night painting.

I got an email from someone at Follow.it a few days ago. Thanks for finding a solution for all of us.

The quilting on the poppy quilt looks great! I especially love the swirls in the sky.

Thanks for the information on FollowIt! I haven't decided what I'm going to do yet. Congrats on finishing the quilting on your beautiful Field of Poppies quilt!