As I might have mentioned before, the pain level in my shoulder and thumb has decreased substantially. Most days, it's almost as if it never happened. Some days, however, are designated as "pain days," and yesterday was one of them. I'd hoped to do some weeding in the yard, but it would have been a bad decision. Even Mike was telling me to sit down for the day, and so I was able to have a slow day without guilt. By day's end, I was feeling much better, although I'll admit holding a needle for much of the day was making my thumb cranky. It's feeling pretty good this morning.

So, what was all that slow-stitching? Well, thanks for asking. I finished up the first section on Calendula Patterdrip's Cottage. 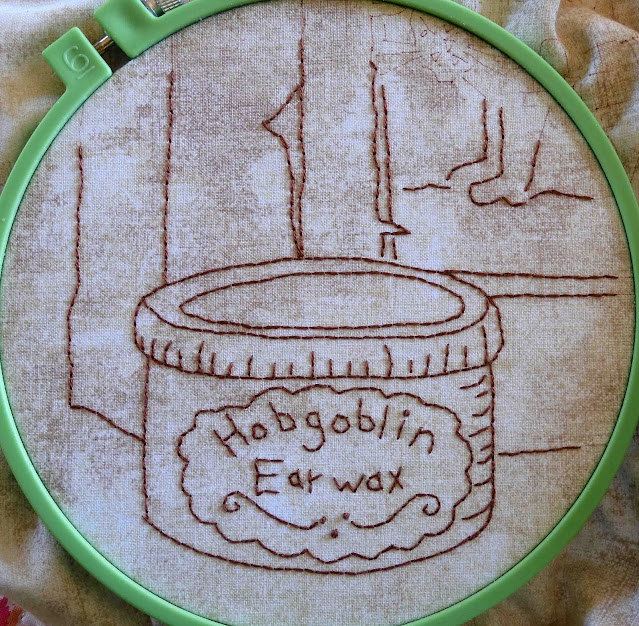 With so much fabric on this piece, it's a bit of a to-do to move the hoop, roll up the excess, and pin it out of the way. I put it away, but then got it out later and stitched some of the next section. 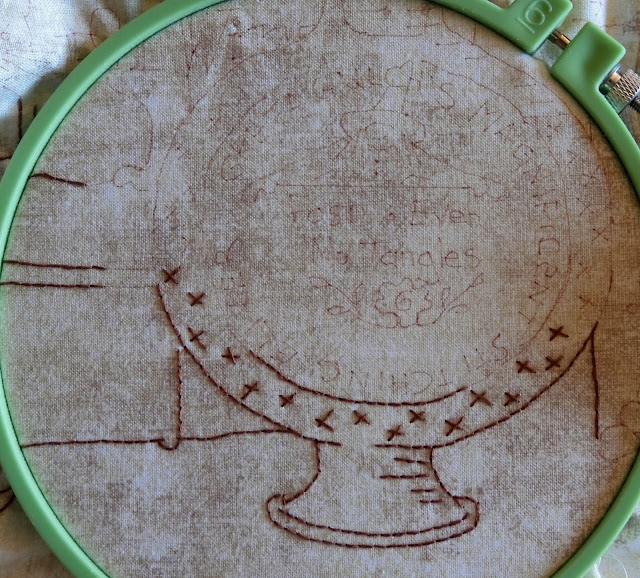 It's actually going a little faster than I thought it would, and I can see most of the tracing just fine. I keep the pattern close by, and that helps me to "see" what it hard to see on the traced fabric.
Between those two sittings, I stitched around the third corner of the Sundress binding. 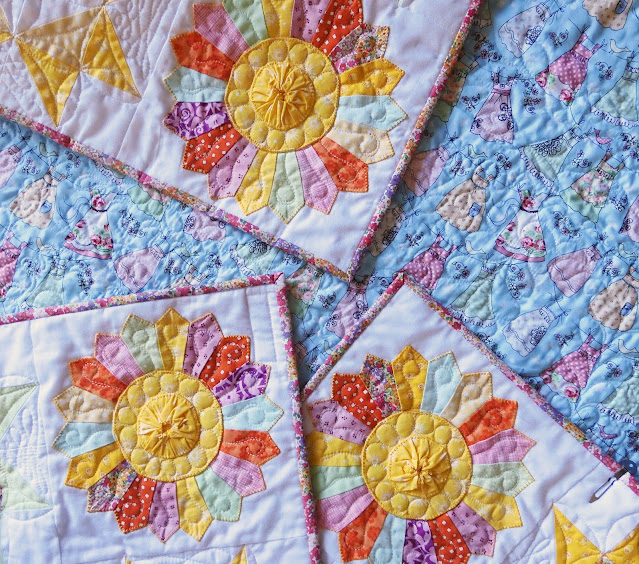 I'm really hoping to finish this off today. I don't want to take it with us on our outing to the beach tomorrow, and so I'd like to have it in the finished column before we leave.
Also yesterday, I tried this recipe from our diet. These are essentially Rice Crispy Bars, but the diet calls them Browned Butter-Pecan Chewy Crispy Bars. 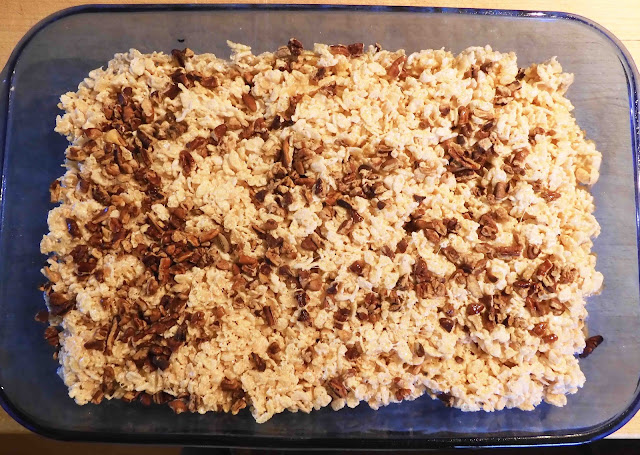 I had in mind to take these along on our camping trip, but don't let these being on the diet fool you. They're really a great way to ruin your diet because Mike and I snacked on them all day until we'd eaten half of them. So try them at your peril. They were quite tasty, especially after they sat for a couple of hours and got really stuck together. But here's the thing: Cut these into brownie-sized portions, and they contain 105 calories each. On the other hand, you can buy the ready-made Rice Crispy Bars in the grocery store, individually wrapped, and those contain just 120 calories. Okay, so it's still fun to make something at home, but I'm not sure these were worth the effort for the savings of 15 calories. I suppose you could subtract the calories expended while stirring them and making them, but...yeah...probably not so much.
In other cooking, it was so nice yesterday, we sat outside for dinner for the first time this year. We often get wind at our place, and so sitting outside isn't as pleasant even on a warm day. Last night was warm and still, and it was a nice way to end the day. Yeah, and wine isn't on the diet, but sometimes you just have to splurge. 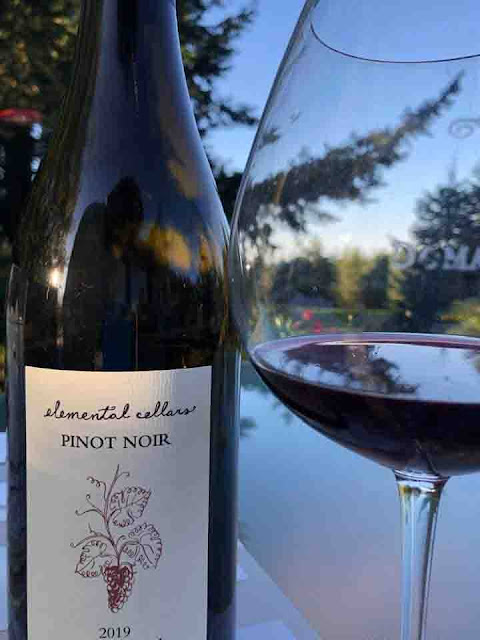 For dinner, we had this Thai Beef Salad, also on the diet. This was really tasty. Mike grilled the steak (we used top sirloin), and I made the salad. 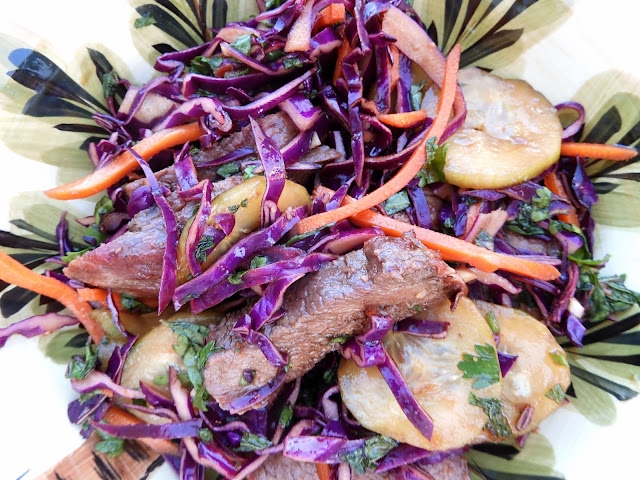 The recipe calls for fresh bean sprouts, but we can't get them in our grocery store any more. I wrote about this some years ago. Our local Kroger-affiliated grocery store has stopped carrying bean sprouts since they tend to be culprits in E. coli and salmonella outbreaks. The produce manager explained to me that when vegetables are recalled, the store has to absorb the cost of that. And so, Kroger apparently decided to stop carrying them after several episodes.
For this recipe, you could use canned, but I had half a cucumber in my crisper, and so I substituted that. It was good that way, and so I'll keep doing that in the future. Also, I put the dressing on the salad about two hours before we ate it. This salad is made up of all hard vegetables...cabbage, carrots, and cucumbers. It seemed to me it could benefit from a little softening up as it marinated in the dressing. Also, it's supposed to serve six, and I'm saying no way this serves more than two. We were supposed to have some side dishes on the diet, but we ate it as a main dish salad, and it was very tasty and filling.
While we sat there, I hopped up with my phone and ran around taking pictures in the fading light. The flowers are looking so pretty now, and we're just barely getting started on the blooming things. 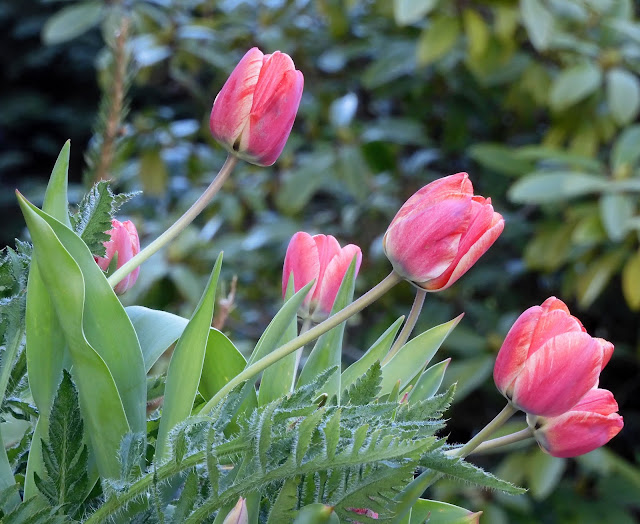 The cherry blossoms are coming on at the perfect time. We're expecting dry weather for at least a week ahead, and so the bees will be busy. This is the Black Tartarian cherry tree. 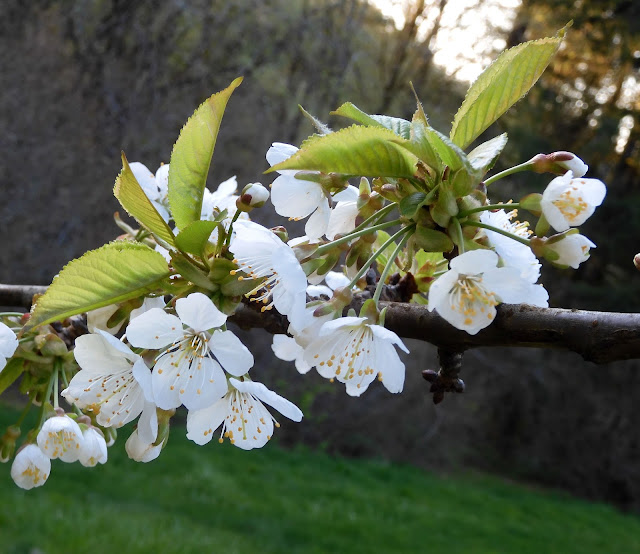 This next one is the Bing. Fingers crossed we get some more cherries this year. 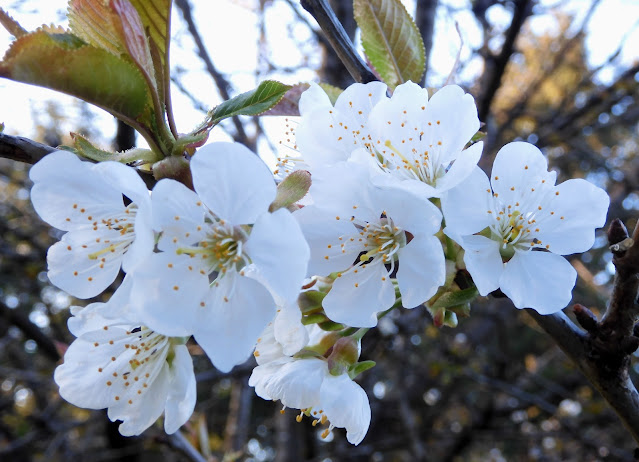 I noticed this yellow tulip is opening in one of the whiskey barrels. See how its stem is purple? I love it when the things of nature follow along with color theory. With purple and yellow being complementary colors, I'm glad this flower is following the rules. 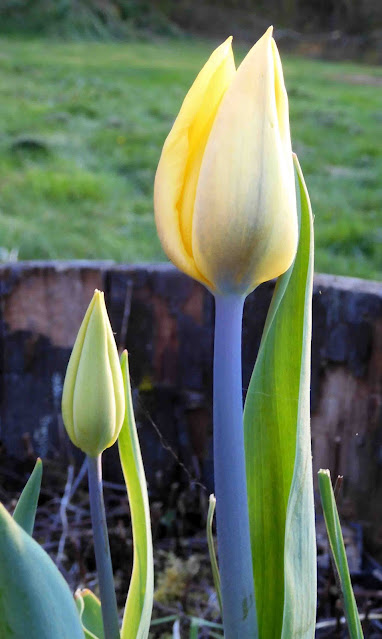 Here's a close-up of the red petunia basket. 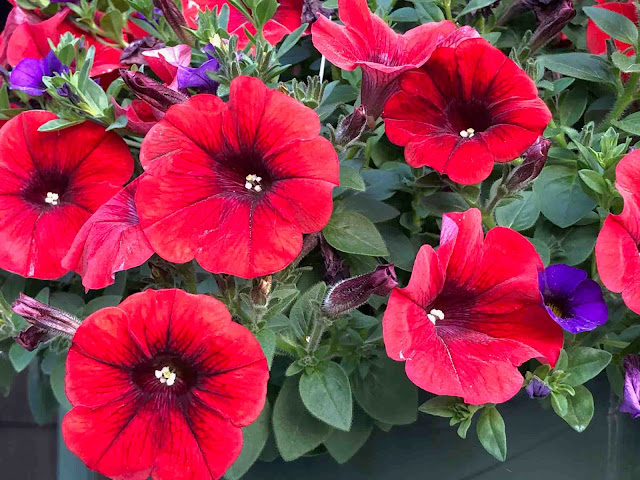 Here's one of the gerbera daisies. I just love these. 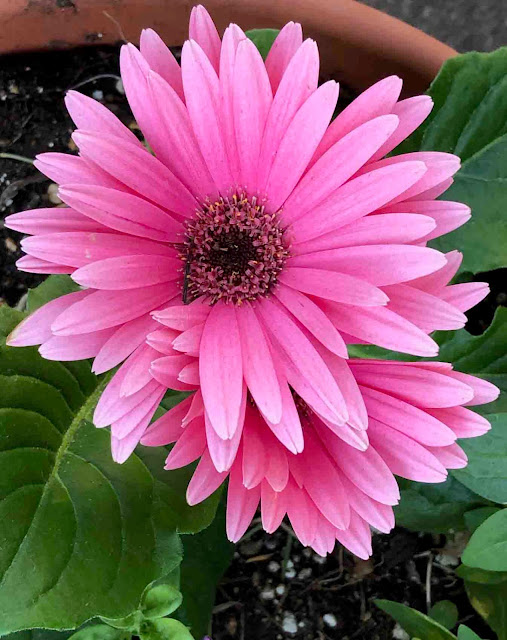 Here's the other petunia basket. 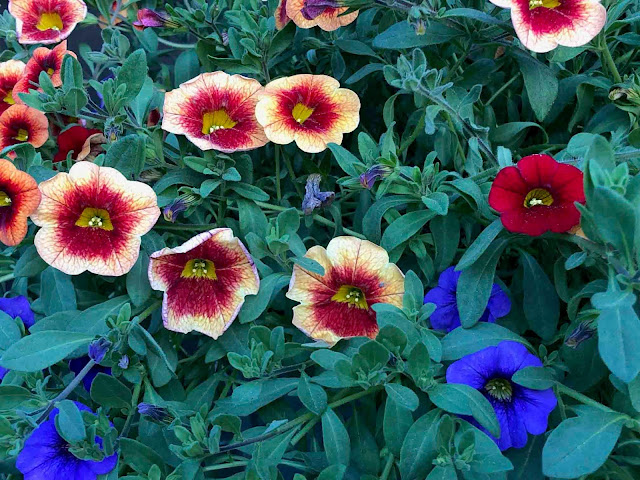 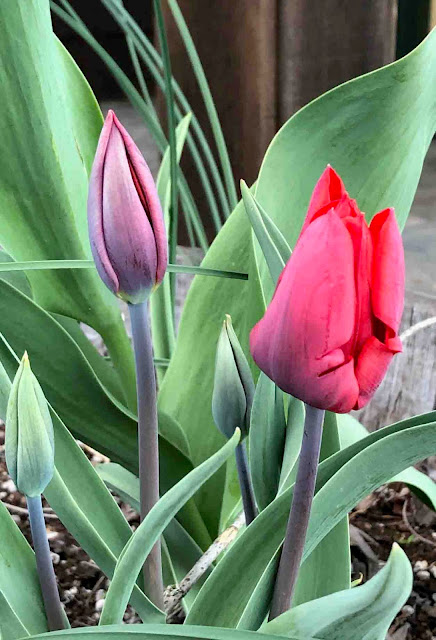 And here's the flowering plum close up. I think these trees are the prettiest I've ever seen them this year. Mike made a special effort to prune them last year, and it shows. 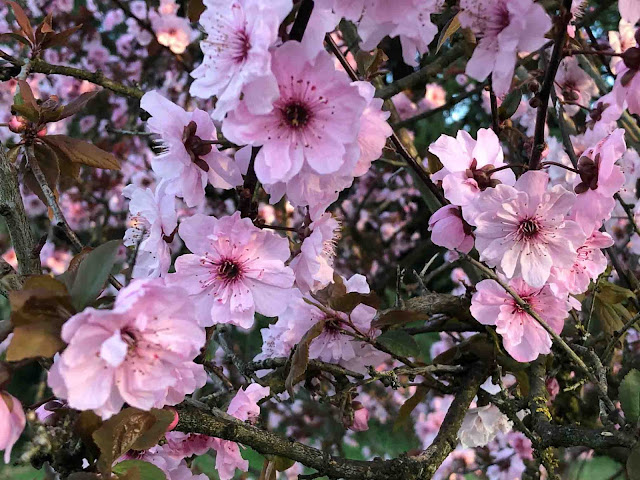 So that was a tiring day for kitties. There was lots of running and playing. 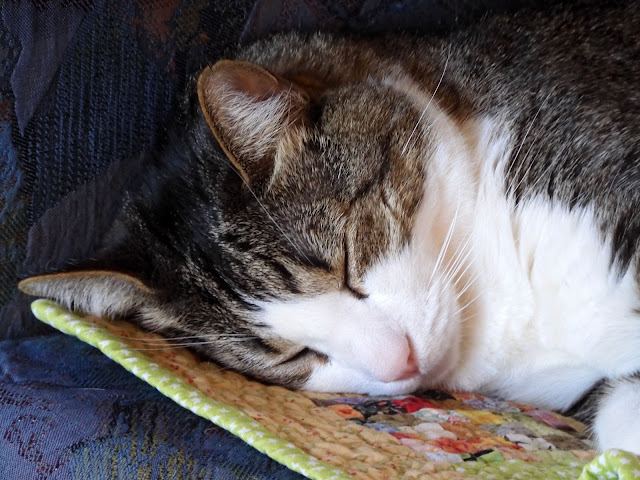 Today will be mostly devoted to packing. Tomorrow we're heading over to Beverly Beach State Park near Newport, Oregon. It's been a while since we've visited that stretch of the Oregon coastline. We're going because my dear friends from high school, Lenelda and her husband Bill, are visiting from Ft. Worth, Texas. Lenelda and I swam on the city swim team together. Bill also went to our high school, and graduated in the same class with Mike, although they didn't really hang out together. I knew Bill because he had the lead role in our school's production of South Pacific. I played the piano in the orchestra. We didn't really know one another either, but we knew of one another. Anyway...you might remember we visited with them when we were in Texas, 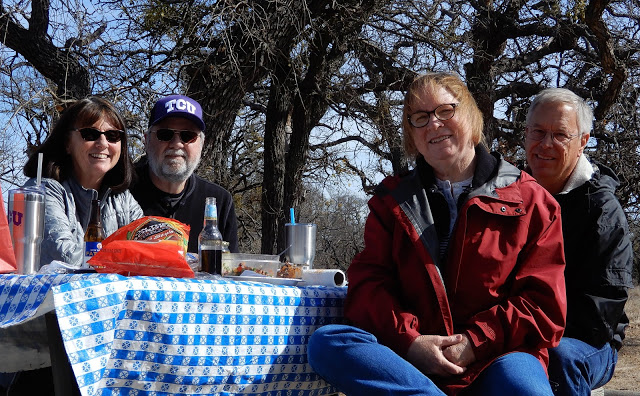 and Lenelda and I went to the Sisters Outdoor Quilt Show together several years ago. 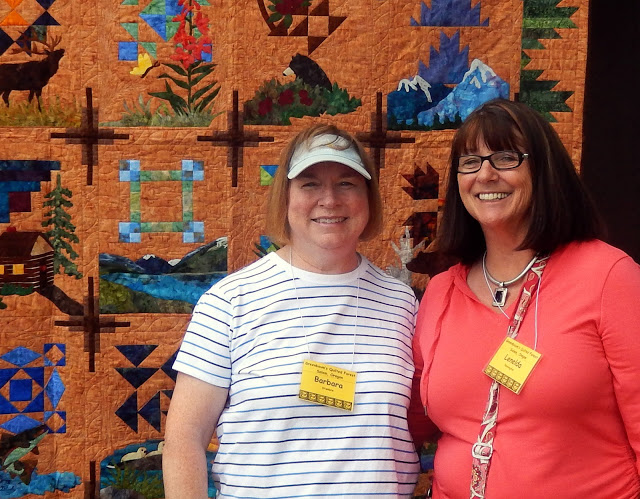 It's always a treat to see them, and so I'm excited to be getting together again. Lenelda has family in the area, and so they get to Oregon on occasion. I'm just so happy they're coming now. Just there I paused to find there are two quilt shops in the area. We're expecting dry weather...always a gift on the Oregon coast in April...so, let the fun begin!!!
And just to close the parentheses on that whole email subscriber issue, I've exhausted all possibilities. All the mail servers require paying for a monthly subscription...something I'm not willing to do. Some of them purport to be free, but they limit the number of emails you can send per month. Each subscriber constitutes one email, and so my limit is reached on the first day of each month. I considered whether I could create an email group within my gmail, but found that avenue cut off as well. I can only load ten emails into a group and that simply will not get the job done. I've spent all the time I'm going to on this, and so I leave it to you whether you'll want to make a few extra clicks on your screen to keep these "letters to friends" coming. I hope you'll join us somewhere after the end date of July 1st when Feedburner closes its virtual doors.
Okay, so packing and (hopefully) finishing off that binding today. Time to get going. At this writing, I'm planning to blog tomorrow, but then I'll take a few days off while we're at the coast. No doubt, I'll have plenty to tell you when we get back.
Posted by Barbara at 8:04 AM

Say what you want about aging,it's still the only way to have old friends. ~ Robert Breault

Some time ago, I placed a shortcut to your page on my tablet home screen. One click and I'm reading your page. I enjoy my visits with you,thanks for the blog.

Enjoy your time at the beach - good friends and quilt shops, it hardly gets better than that!

It is difficult to hold a larger piece for stitching I think, too...

I hope you have great weather at your beach getaway...hugs, Julierose

I always enjoy your writing, your stitching, your gardening, your adventures. I use Feedly and love just having you in my “feed.”

Glad you were able to enjoy a dinner outside. We have no shade left on our deck which faces west, so we never eat outside any more. Looked into an awning, but they were hugely expensive. I'd rather buy fabric. I think I will experiment with both Feedly and Bloglovin' to see which suits me better. I follow too many blogs to bookmark them all and you can't tell when a new post is available. We'll all manage, never fear. Enjoy your trip to the beach and the visit with your friends.
Pat

Enjoy your outing with good friends! I'm so happy you are able to get together after all this pandemic stuff. Your flowers are so lovely. The trees are just beginning to leaf out here, and my sinuses are not enjoying that process. Glad you rested, too, instead of pushing it with the shoulder and thumb.

The salad looks great. None of our stores have carried sprouts for several years now, for the same reason. From time to time I consider getting one of those sprouting kits and doing my own but so far it hasn't seemed worth it. The flowers are gorgeous, can't wait til I can buy outdoor baskets!, and it is good when they are team players. When I was a kid it was consider unfashionable to wear blue and green together, and I never could figure it out, what with grass and sky working together so well. Glad that has changed, but purple and yellow have always been a classic. Wine is always in my diet, and I recommend it as a primary health food. Please don't review my health stats, just take my word for it.

Hi Barbara. I have found a lot of the blogs I get by email on Bloglovin, including yours. It’s not the same as reading your posts when you post them, but it’s an okay alternative.

I really have loved following your blog, and will miss your sense of humor, pictures of every blooming thing, etc. Do not know how to bookmark.

What is that on top of the rice krispies? And will you provide the recipe? Thank you.
Have a fun trip.

It may not seem like much, but at the end of the day those 15 calories saved can add up fast. Thank you for doing all the research on the following by email. I use Feedly to follow blogs as my email is full enough. So I'll still check in (weekly seems to be my practice these days). Have a great long weekend and visit with your friends.