You might think I'm controlling the weather with that title, but I'm not. If it were up to me, it would be a lot warmer. We had sunshine yesterday, but still frigid temperatures. Nevertheless, I saw the first Rufous hummingbird of the season. We have Anna's hummers year-round, but the Rufous are only around in spring and summer, and then they start heading south in the fall. 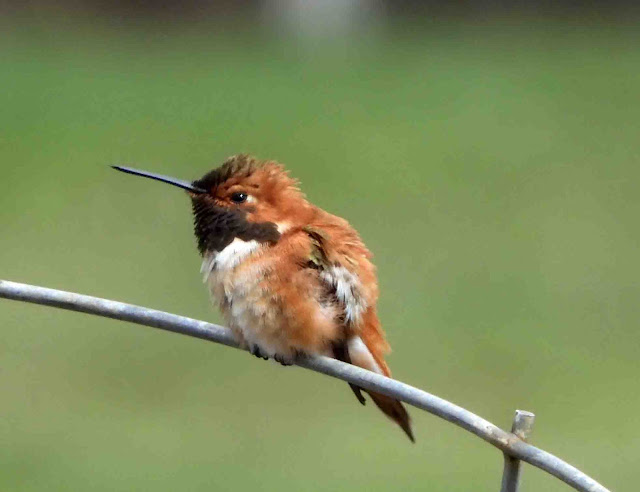 This guy was not at all happy about the cold temperature. 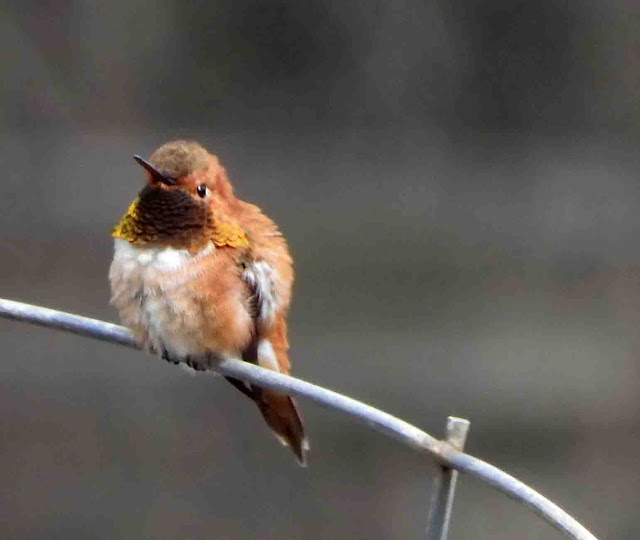 I went out for a little walk around. It's still too cold to see many blooming things, but there are more daffodils. 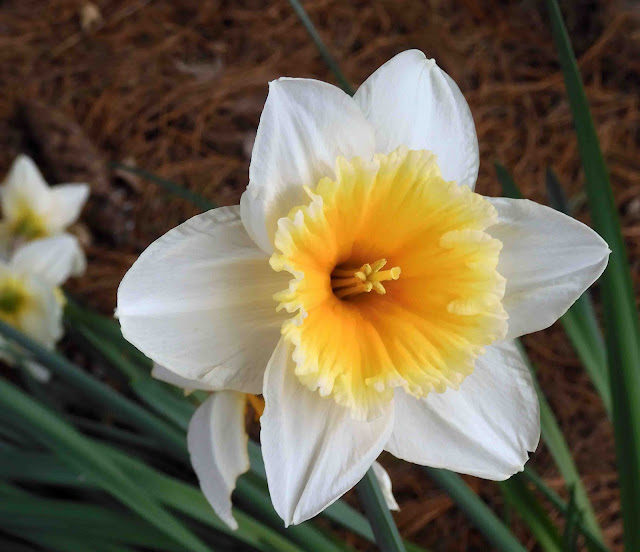 Also, I was happy to see new buds popping out on the wisteria we planted last year. I worried the ice storm might have killed it, but it looks like it's on its way back. You might recall our wisteria died last year, and we replaced it with this new one. 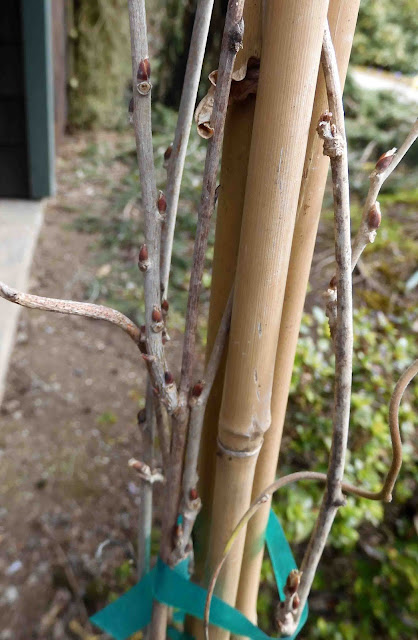 Also, I noticed some new growth on the blueberries we planted last year. No picture of those...there wasn't much to see, photographically-wise.
Of course, my furry friends came with me. Sadie thought she'd climb the cherry tree, but then decided just to give it a good scratching instead. 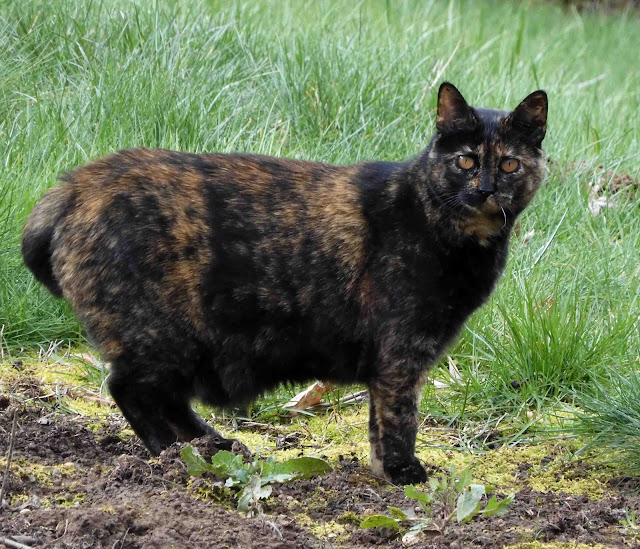 Smitty followed me as I made my rounds. 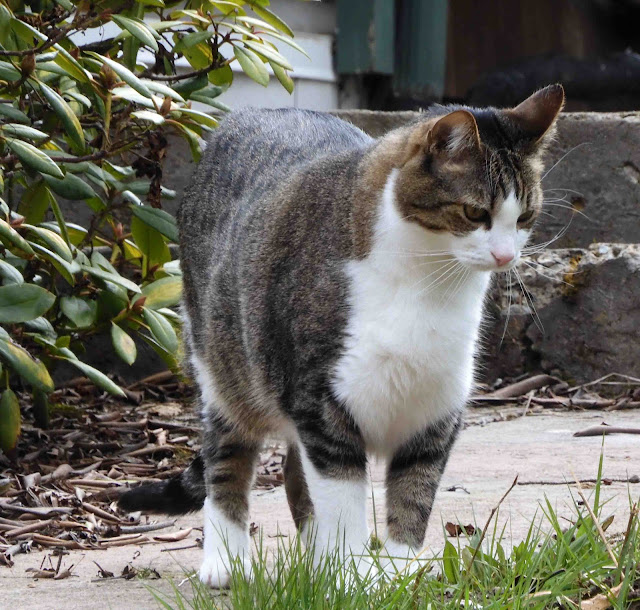 They were both ready to go back inside after just a few minutes. Too cold for kitties. 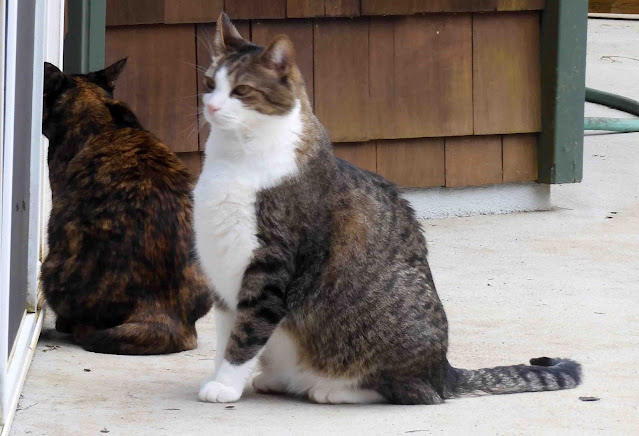 Speaking of kitties, I finished up the fifth of the Ties & Tails blocks. 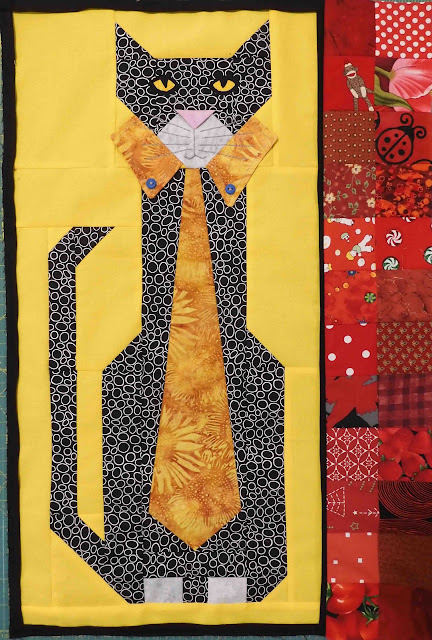 Here are all the blocks I have so far. 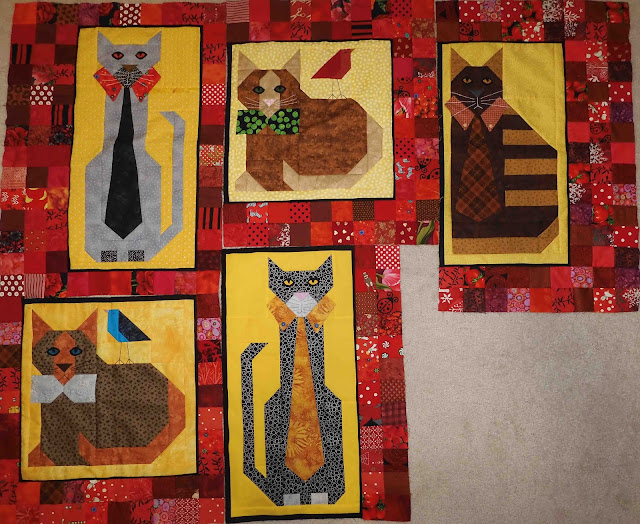 I was thinking I was being super smart about adding the sashings as I go, but it looks like there's a hole at the top right of the newest block. Maybe when I make the next block it will all fit together.
It was too much for my brain to figure out in the moment, and so I decided to take a nap before I did anything else. You might recall from yesterday's post that I was mulling over what to do next. In the end, I decided I was more interested in finishing up the last row of blocks for Jenny's Flower Garden. I needed to cut 180 of the 2 x 2-inch squares. Believe it or not, there are 100 in this little box. 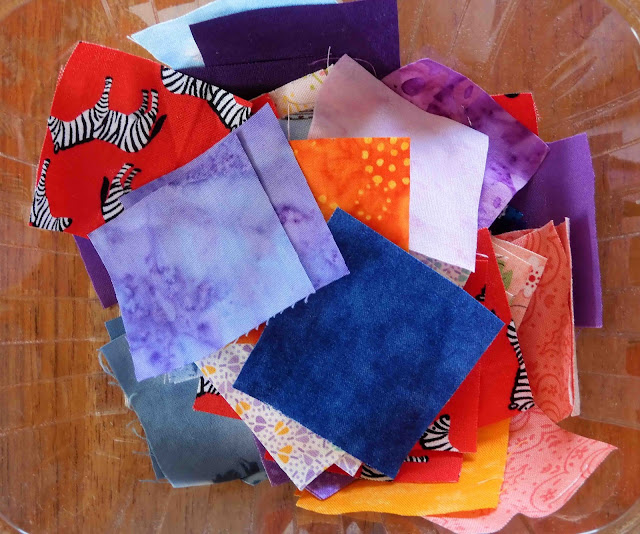 So I'll finish cutting the rest today, and then I'll get to work sewing them together.
The only other sewing I did yesterday was to stitch the rest of the tree and some more leaves below. 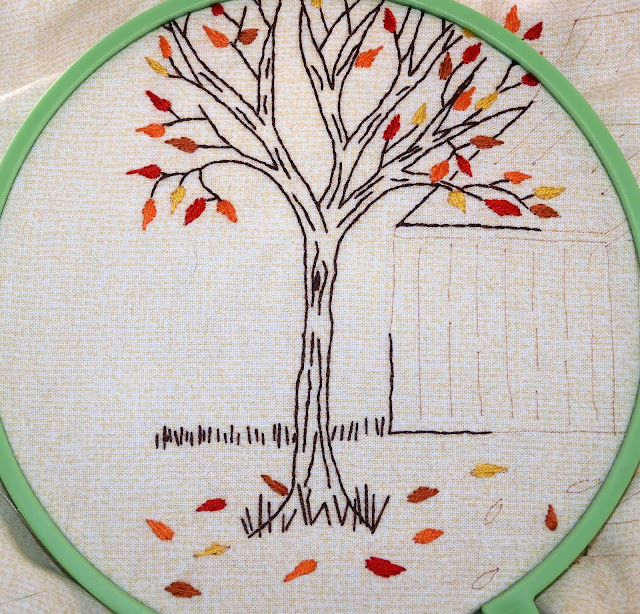 Now I've moved my hoop to the right, and I'll get started stitching the barn. 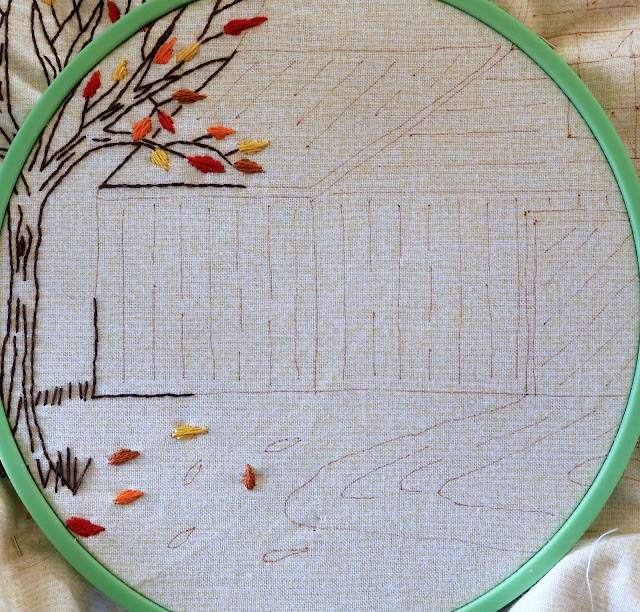 Did I say we were back on the Cooking Light Diet? I can't remember. We started on Monday. Last night, I made this Shrimp and Orange Salad. This was surprisingly tasty and easy to make. I sprinkled mine with black sesame seeds. None of those for Mike. He just says no to seeds. 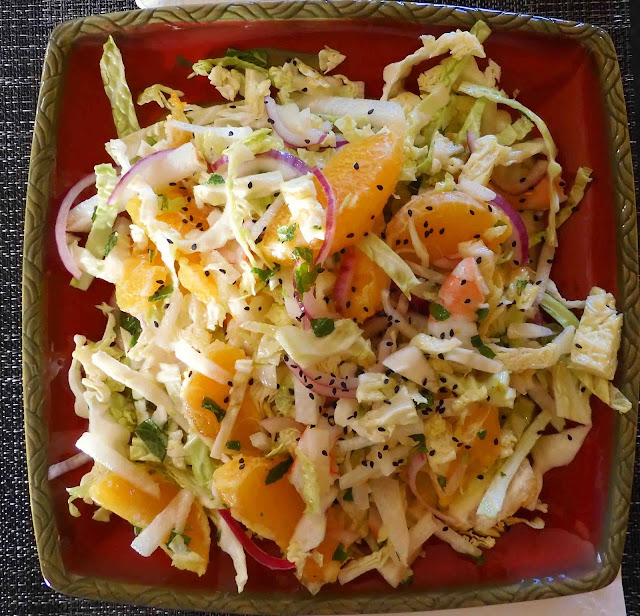 I made it just as the recipe suggested, although I made up the red onions and let them pickle for about an hour before doing the rest. If I were to make this again, I'd probably just add a can of mandarin oranges rather than peeling and segmenting fresh ones. They were surprisingly tasty in the salad though. Using canned ones would just make it quicker and easier. With my broken thumb, I've been avoiding anything that might increase the pain, and so I asked Mike to peel and separate the orange sections. He also pulled the tails off the cooked shrimp.
While we were making dinner, Smitty was enjoying the afternoon sunshine. This is the best part of the day, if you ask him. 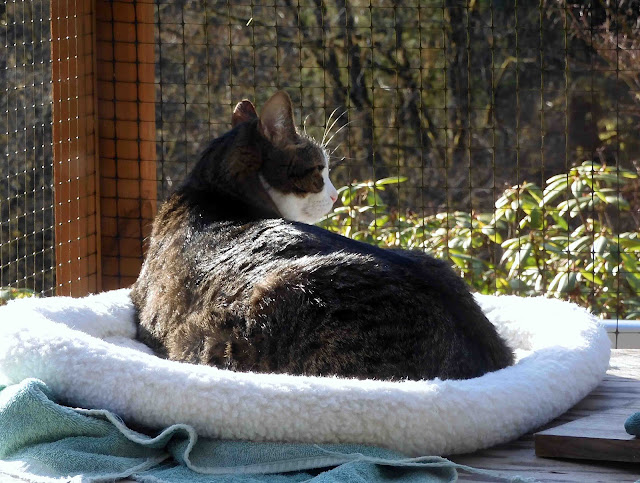 We're expecting warmer weather today and temperatures up into the high 60's. Yahoo! I might actually get out for a walk today. Nothing much more on the day's agenda. I want to finish up one housekeeping task, and I'll spend the rest of the day on my sewing. I did my two rounds of therapy exercises yesterday too. That's two days in a row. Yay me! Let's see if I can go for three.
Posted by Barbara at 7:42 AM

Ties and Tails is looking so cute--you are doing such a great job on it!!
It is 63 now at 1:30--skies have darkened in anticipation of those rains to come...but nice that it is warmer.
Hugs, Julierose

I'm behind a couple days on commenting. I'm glad to hear that you are keeping up on the PT exercises. And I send sympathy on the rotary cutter accident. Been there. In the weather department, we hit 70 degrees yesterday and we're expecting 3 to 5" of snow tomorrow. That's western NY for you. I just went out and cut a big bouquet of daffodils since they'll all be laying flat on the ground after the snow, if it comes. At least I won't of any excuse for not sewing the binding on a baby quilt tomorrow.
Pat

Love the cats in the ties & tails the red just adds such a glow. I like seeing the hummingbirds as we don't get them here in Melbourne Australia. We have some of your warmth 80'F today and higher temps tomorrow even though we are in autumn and I have been wanting the long wool coat some mornings.
I am very glad you are keeping the therapy exercises it's going to be better in the long run. Seeing your progress on the embroideries you do makes me keep plugging away on the one I am doing for my daughter. It has been and continues to be inspirational and encouraging for me.

We reached 83* yesterday. That almost hit a record warm. One more day of warmth and we cool back down. It may be a harbinger of a rough summer. We do not seem to get that hummingbird here or else they flit too quickly by for me to remember seeing it. 100 small blocks and 80 more to cut. I love seeing that quilt grow.

Yay for getting those exercises done! Looks like your yard is waking up to Spring, with some buds and blossoms. We have chilly weather this week, but supposed to get up to the 70s for the weekend. The kitties are looking good, and I'm envious of you seeing that Rufus, we don't have them here. He's a handsome little fella. I have an appointment this morning, but then I'm home to sew!