It was a grocery day today, and so we were up and out early. Now, just after 11:00 a.m., we're good to go for at least another week. I'm hoping we can avoid grocery shopping again before we get home, but that's probably overly optimistic. It's another two weeks, I'm guessing, before we're back at the Three Cats Ranch.

Yesterday was a leisurely morning. We had lunch planned, but we weren't meeting up with our friends until 1:00 p.m. It meant a slow morning. I stitched yesterday's inchy...this one devoted to chain stitch. Chain stitch isn't hard, but it's one of my least-favorite stitches. It's tedious to do such a tiny chain. The outer edge is done with a woven back stitch...or maybe it's stem stitch. I can't remember. 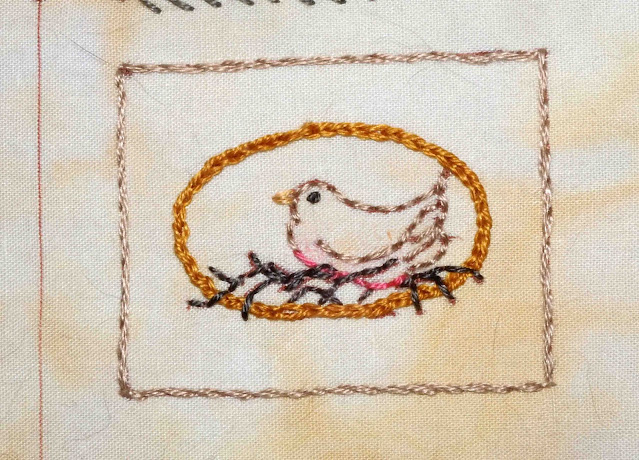 When it was time to leave, Sadie was already well into her sunbathing mode. 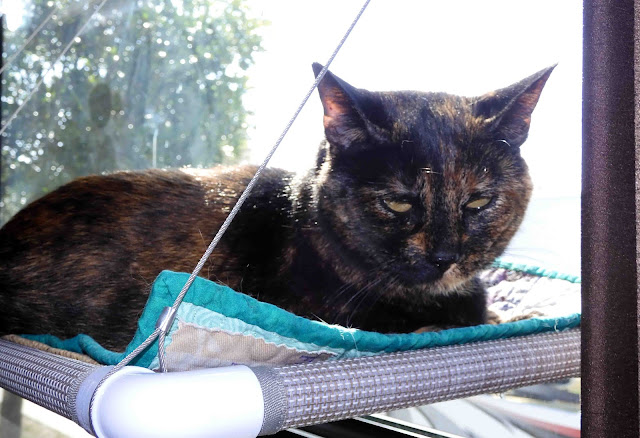 Smitty was getting ready for a snooze in the bedroom window, but first...this door handle makes an excellent chin-scratching spot. Anyone who knows cats knows that they have extremely itchy chins. Fortunately, this itch can be scratched on just about any nearby object. 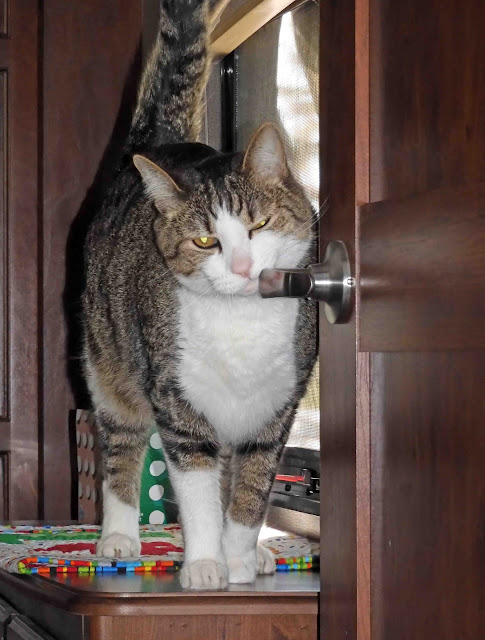 So we had a nice lunch at Enzo's BBQ...pretty darned good BBQ...and then Mike had an appointment to get a new battery for his cell phone. We drove to the Apple store, and it was an hour wait to get the battery. We decided to kill the time at a nearby Mexican restaurant with some margaritas, chips, guacamole, salsa, and an appetizer of taquitos...and no, we were not hungry. That pretty much was dinner for the evening. We were home early enough to catch the news. When we came in, Sadie was fully involved in her sunbathing. 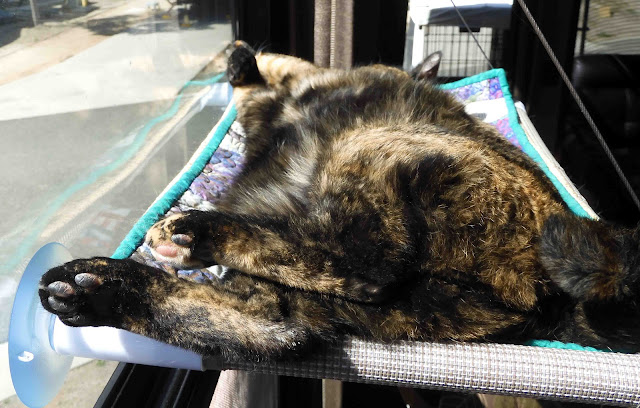 Smitty was stretched out and snoozing on the bed. Obviously being alone during the day stresses them out considerably. 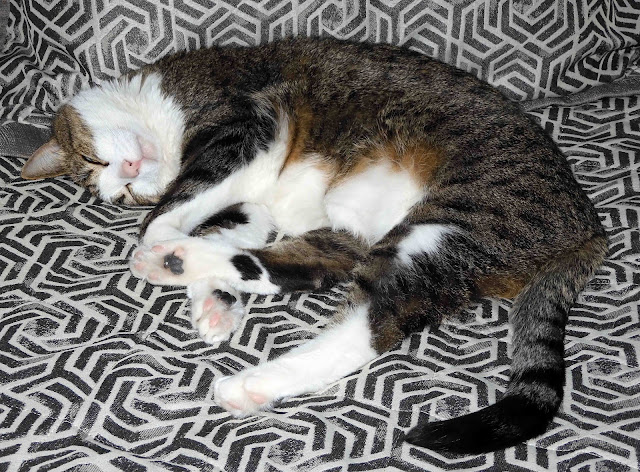 With grocery shopping going on this morning, we headed out early, but not before I stitched the day's inchy. This one is the dreaded bullion stitch, and I stitched it like a boss. I didn't even have to watch the video tutorial, which I estimate I've watched approximately 168 times now. 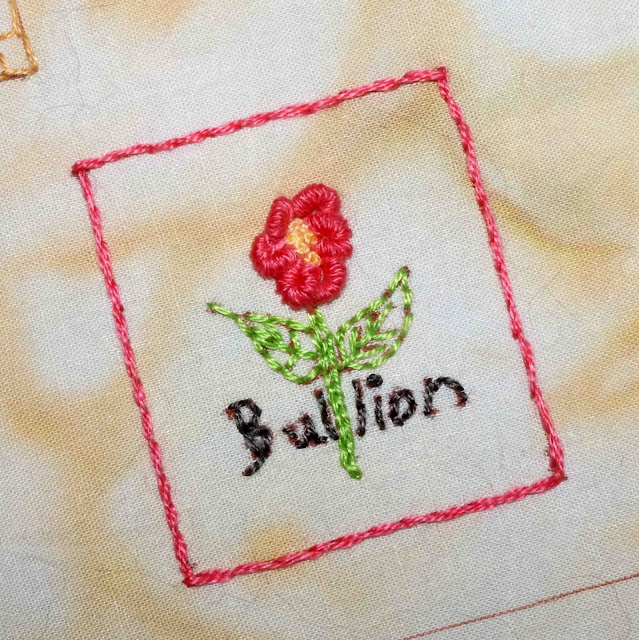 With my excellent stitching cat by my side, how could I go wrong? 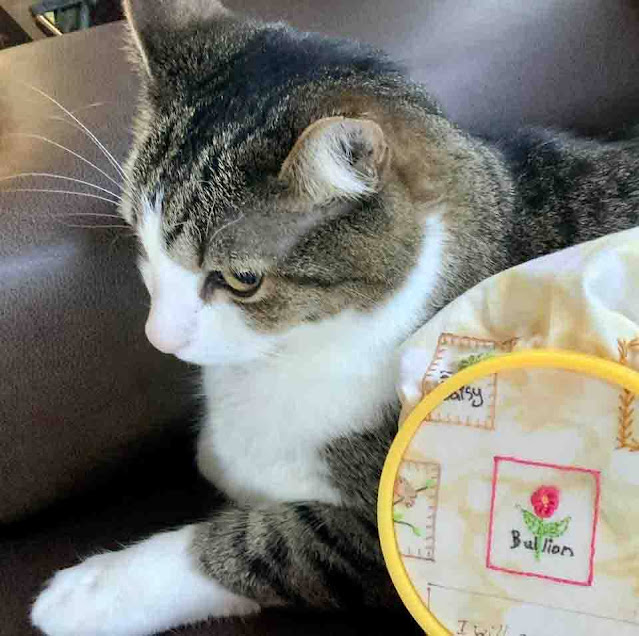 As we were heading out, Sadie was contemplating the arrival of the morning sun. As I write, she's stretched out over my head...warm as burnt toast. 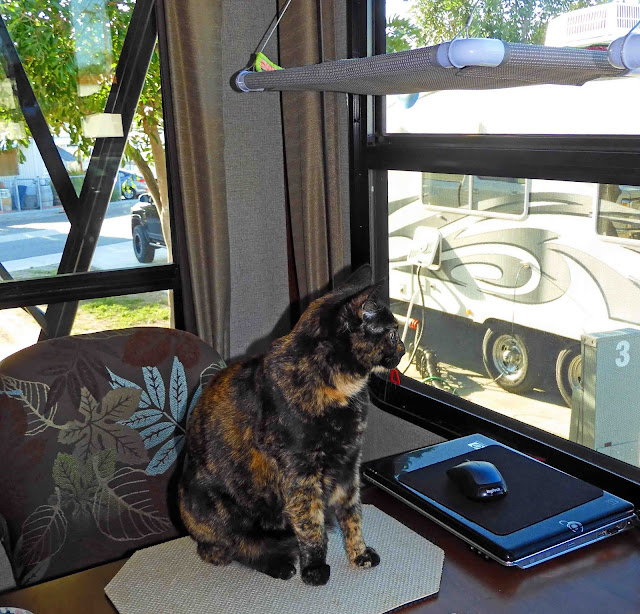 We're back from our grocery shopping trip. Everything is put away, and that's saying something when we're working with the limited space in the RV. As we bring in bag after bag, I find myself sighing heavily at the prospect of figuring out where to put all of it. But it's done. The rest of the day has to get better.
We're meeting our friends Deb and Tom for an afternoon outdoors on their patio. Deb and Tom are providing some appetizers and beverages. I'm taking some cooked shrimp and cocktail sauce and the hot dungeness crab dip that is a family favorite. There should be plenty to eat, which makes me think we'll probably skip dinner again tonight.
So that's how we're rolling here at the Traveling Three Cats Ranch today...only no rolling. Definitely no rolling until next Friday.
Posted by Barbara at 11:31 AM

Weekend planning is a prime time to apply the Deathbed Priority Test: On your deathbed, will you wish you'd spent more prime weekend hours grocery shopping or walking in the woods with your kids? ~ Hal Borland

Lovely bullion stitching...sounds like you are having a grand time...eating out and all...enjoy hugs, Julierose

Keep having fun with those friends and all that good food!!!
I did that bullion stitch really easy today-did watch her video first though!! and I didn't realize she had one on the cast on one til today--and we get to do that one tomorrow again--I believe so will be watching that one for sure!!!
Have you seen the new Halloween mystery one she is doing--starting really soon??? I like the block she is showing us--I mean it has a cat on it--soo who wouldn't like it??? But it will be really a large quilt--65 x 76"--too big for me--
but the blocks themselves I think are only about 8 x 6 and there is only 9 of them--sooo???? She also says $10--but I don't know if that is each month or for the whole pattern???
luv, di

Food, fresh air, friends, and felines - how could you go wrong?

The bullion stitch looks perfect. I guess I just need to watch the video that many times and if I'm very lucky mine will look as good. It sound like perfect day (except the grocery shopping) and the kitties really do know how to enjoy themselves.

Bullion like a boss is right - what lovely stitching! That crab dip looks yummy. So glad you have time to spend with friends. Enjoy!

Bullion stitch is one I dread because I can manage to mess it up pretty much every time. I much prefer cast on stitch and will use it instead if I can. Glad you were able to have some time with friends accompanied by good food too.

Thankfully the SIT has come across the bullion stitch yet. If she does, I'll probably be hitting you up for a link to that video. Your inchy stitching looks great.