We're into intense relaxation mode here at the Traveling Three Cats Ranch. Sadie is giving the "relaxation" part of our mode a serious trial. She's figured out where the sun shines in the morning. When it shines on a quilt...even better. 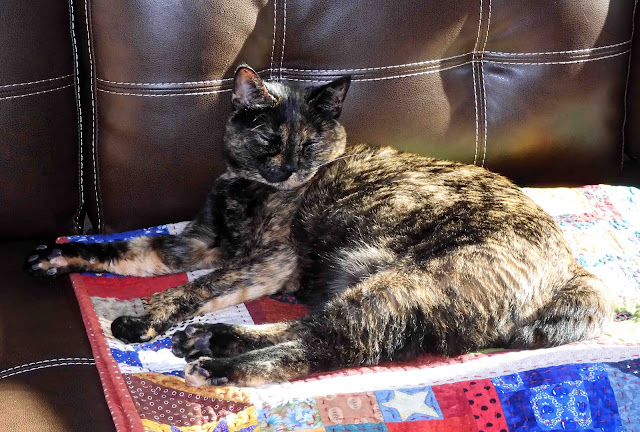 When she isn't in relaxation mode, she's busy baffing at the birds. This bird situation is very mysterious. She can see the birds, but they can't see her through the tinted windows. And so her window baffing has been completely unproductive. This has always worked in the past, and so it's driving her a little crazy. 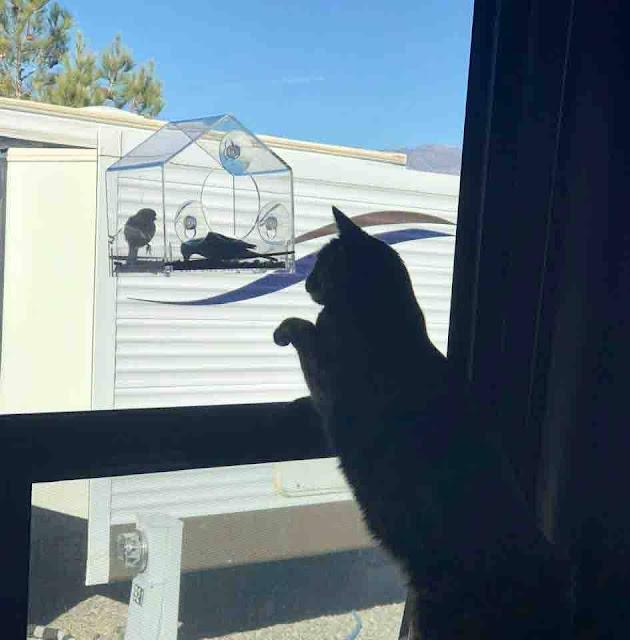 It was something of a red letter day yesterday. For the first time since breaking my shoulder (6-1/2 weeks ago), I managed to make some Blueberry Oatmeal Pancakes. This has been our traditional Sunday morning breakfast for several years, but it all came to a crashing halt with my bike accident..."crashing" being the operative word. Mike has been filling the gap with waffles in the meantime, but it just wasn't the same. So...happy days. It's the little things in life, doncha know. I linked to the recipe back there. I make it just like it says, but I add about 3/4 cup of frozen (or fresh) blueberries to mine. 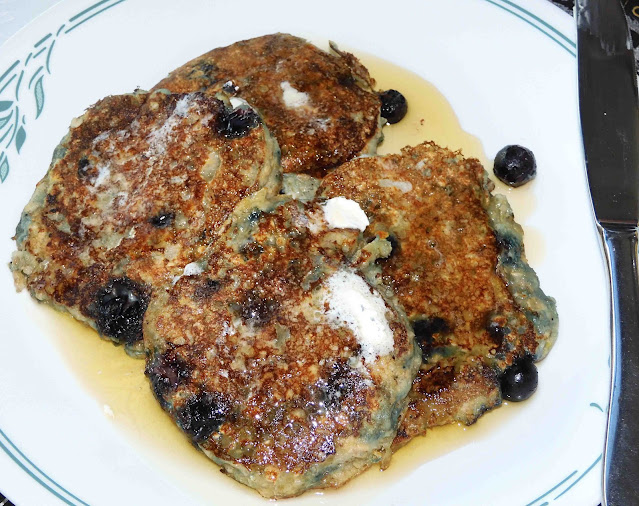 With breakfast finished, I did some slow stitching. Smitty lent his helping tail to the effort. 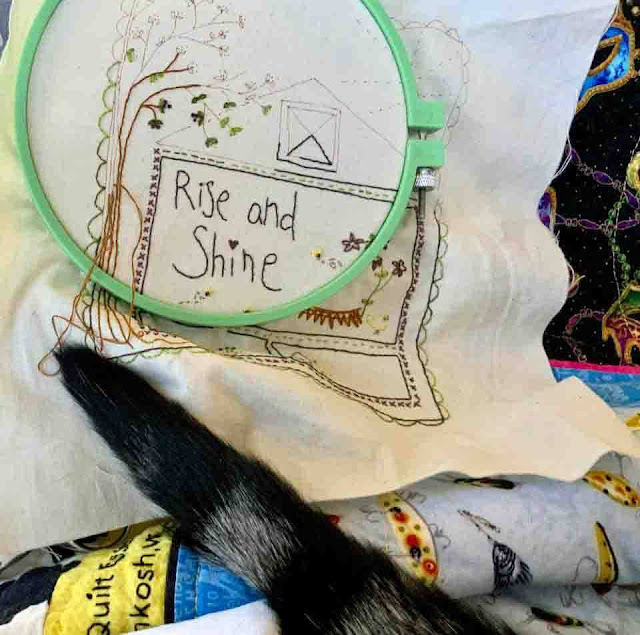 My project for the day was to trace out the stitchery for Meg Hawkey's stitch-along, set to begin on February 1st for International Embroidery Month. When I mentioned this yesterday, I wasn't yet sure how I was going to do it. I ended up eyeballing her photograph for placement, and tracing all the motifs onto whole cloth. 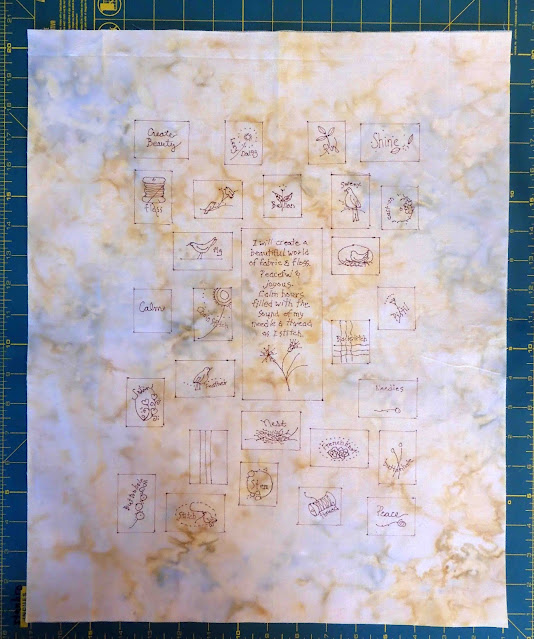 My "whole cloth" happens to be a light batik (the picture above shows it more saturated in color than it actually is). I was using a Pigma Micron pen, which is always my pen of choice. For some reason, the ink wanted to spread out wherever pen touched fabric on this batik. I won't do that again. Also, my broken thumb makes it hard for me to hold a pen, and so this isn't the best tracing I've ever done. I'm  not a perfectionist by any means. Someone told me once that a perfectionist is someone who is always looking for the flaw. So, while the little bobbles might bother some, I prefer to let them remind me of whatever was going on in my life at the time. Most of the little spots can probably be covered with stitching, but any that can't will remind me that I was dealing with broken bones when I stitched it.

So...that took forever. In the afternoon, our shadow selves decided to take Mike's drone out for a little fly about. 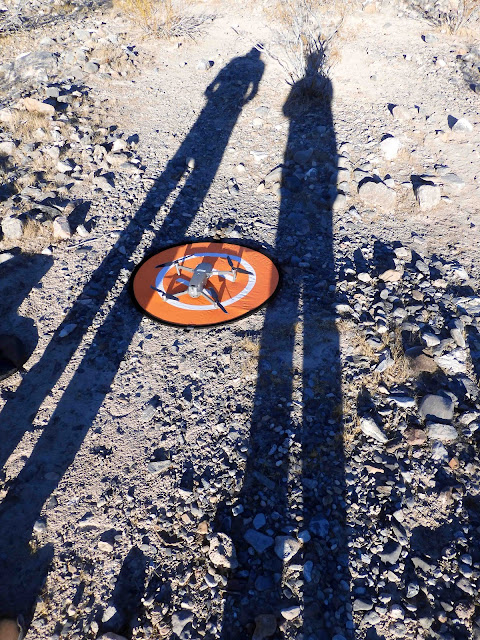 Even the drone has a shadow self, although it tried to hide itself with the rocks you see below. 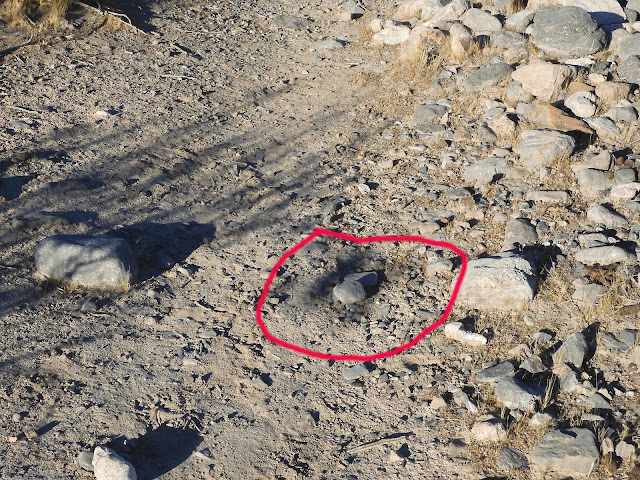 While the drone was buzzing around, I took note of the surroundings. Right away, I noticed this hummingbird, vigilantly guarding his feeder. 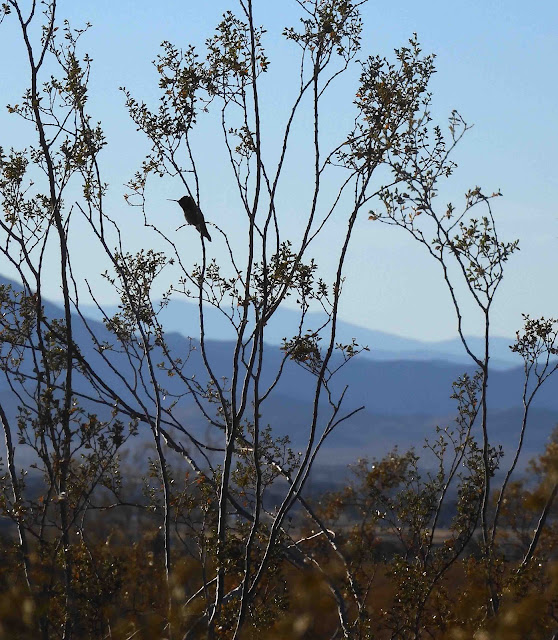 Also, I noticed the creosote bushes surrounding us have all gone to seed. In a few months, they'll be blooming with little yellow flowers. 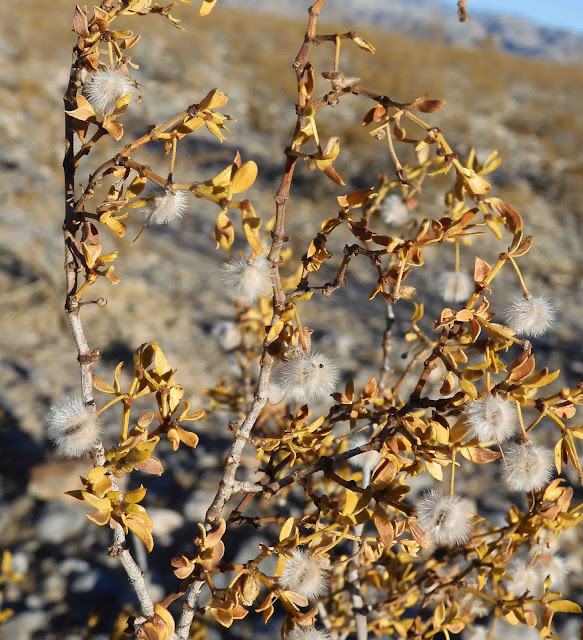 Also, I wanted to show you the primo spot we're in here in this park. We requested a site on this last row before the desert. They won't ordinarily assign spots until you arrive, but they were able to accommodate our request. You can see our rig at the extreme right of the image below. 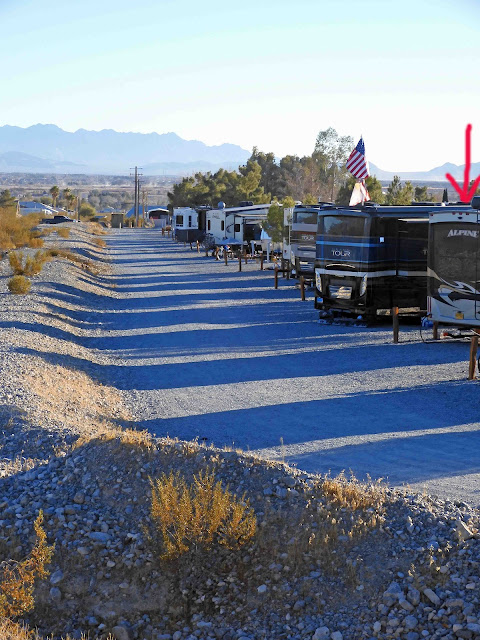 Looking in the other direction, this is what we see. It's nice for the kitties when they don't have a lot of people and cars passing by their catio. 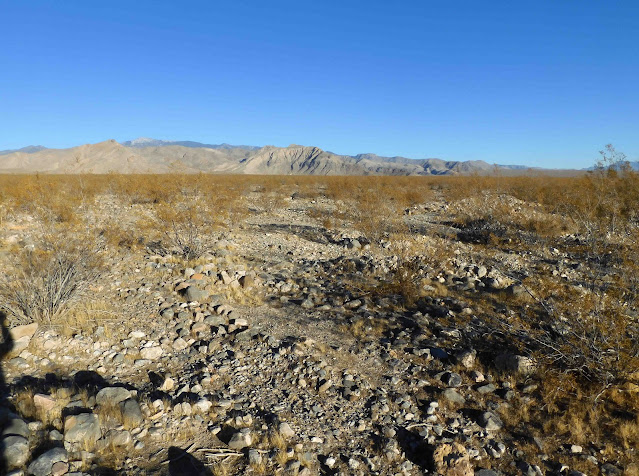 Way off in the distance, on the highest peak, is the interesting formation you see below. This happens when the stuff below is more dense than the stuff surrounding it, and so the softer stuff erodes away, leaving these harder rock formations to stand out from the rest. 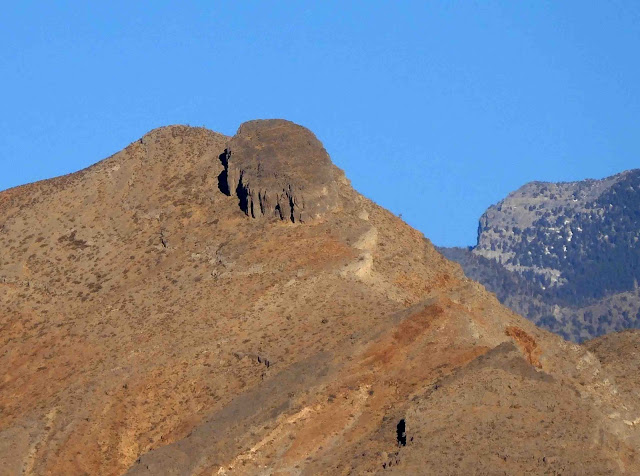 Okay, and about that time the drone showed up again. Oh, hello! Mike brought it in for a landing. 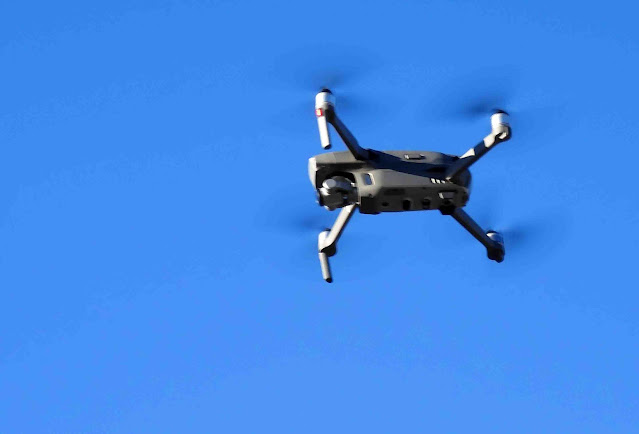 It was time to get Smitty out for a walk. 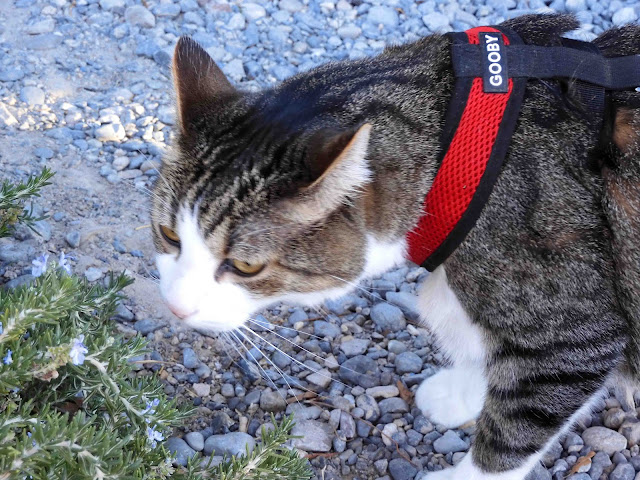 The walk was short-lived, however. He really just wanted to put on the harness long enough to score the treats of valor. When he decides to come in, he's really ready.
Sadie, open the door, woudja? 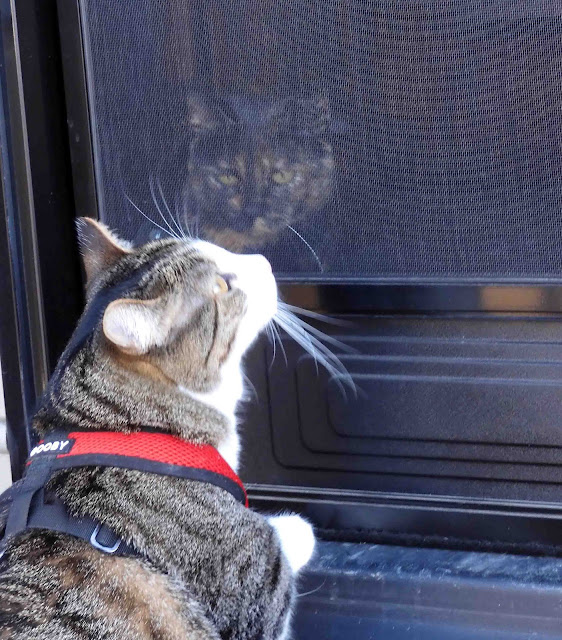 Today, I'll probably get out for another little photography challenge. I'm combining challenges from 365 Picture Today with one from the book. It was kind of fun doing the color a couple of days ago, and so I decided to try that again with a different lens and a different color: red. Also, the challenge is to incorporate lines into the photo. Enter this sunrise from this morning. Red lines. Seems like the sky was cooperating with my own thoughts.

Apparently, we had a power outage last night because our electric heaters were off this morning, and the furnace ran a good bit last night. We'll probably need to refill our propane tanks eventually, but I don't know if that will be today. We still need to make a trip to the grocery store, but that can wait at least another day. Not sure what's on the agenda today. Photography probably, but the rest of our time is up for grabs. Also, I noticed there's a quilt shop in town. It can be visited by appointment only (24 hours notice) to keep the store COVID safe, presumably. I'd like to do a drive-by before commiting to an appointment. We'll see.
Posted by Barbara at 8:43 AM

There is a shade of red for every woman. ~ Audrey Hepburn

the kitty 'pawing' at the bird is cute!!
Glad to hear that your shoulder is nearly back to new again and you can make pancakes!!
And I haven't traced off my Crabapple pc yet--though I do have a design laid out--mine goes in the other direction-and I might to space mine out a bit more can't decide--right now I am still trying to figure out the big linen one I am doing (using old linens and hankies for alot of the top--all kinds of decisions had to be made--but now am down to trying to decide on the fabrics for those blocks--
take care and have fun--
hugs, di

A huge milestone in healing - pancake maker!! This will be a cute embroidery and I look forward to watching you work on it. Mean time I will play with TemculaQuilt Co's Mini Mondays = I do love small blocks.

Curious to know if Mike can mount a camera to the drone? Or maybe it has one. Hmmm. Interesting to see where your camper is in the park - but it seems pretty close to the one next to it. Maybe it's further than it looks.

So glad your shoulder continues to get better! Glad you are having a nice time.

Nice that you were able to make those luscious looking pancakes;))
Happy to hear you are getting relaxation...hugs, Julierose

Your Crabapple SAL piece looks great!! I haven't gotten mine traced onto fabric yet, but I want to do that this week, in addition to planning floss colors.

I'm glad you are enjoying your stay and that you have a more private spot. Hadn't thought about the challenge of tracing with your thumb, but it looks like you managed just fine. Does Sadie try to get out when you take Smitty out?

Yummy blueberry pancakes. What a good sign that your shoulder is healing. Your RV site looks perfect. Amazing view with stunning mountains. Enjoy.

Wow. Some of those photos on your RED assignment are really spectacular. Well done.
And, just so you know--we have a shop across the street that sells a cocktail mask. It comes with its own straw and there is a small opening for the straw. It's designed for cocktails.

the photo of your shadow selves has you standing with weeds growing our of your head. Bad shadow self hair day? Smitty sure looks intent on something there!