It was a much better day of driving yesterday, and we reached our stopping point earlier in the day. It turned out to be a good thing because after we were all set up, we realized there was a problem with our electrical connection. It kept popping a "ground fault," and we ended up moving to a different spot.

Backing up to the beginning of the day, it was very nice to see the sun after so much rain the day before. We got kind of turned around leaving the campground. It seemed as if we were heading north. Somehow there's a big bend in the interstate at that point so that even though our destination was south, we drove north for a short distance. It meant crossing this bridge over the Rogue River to get back on track. 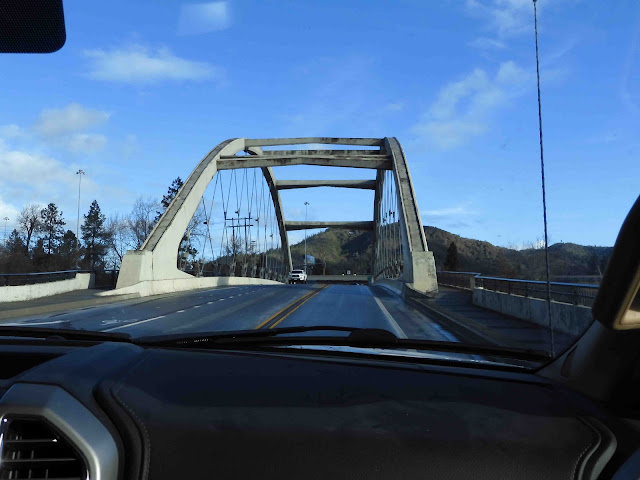 You know we always get excited about bridges, so it was all good.
We drove toward moody skies for a while. 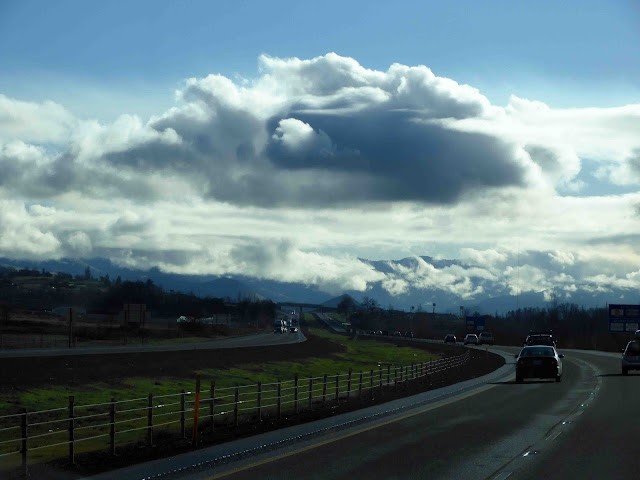 Just before crossing the California border, we caught our first glimpse of Mt. Shasta. You can see the Black Butte cinder cone to the right of the image below. 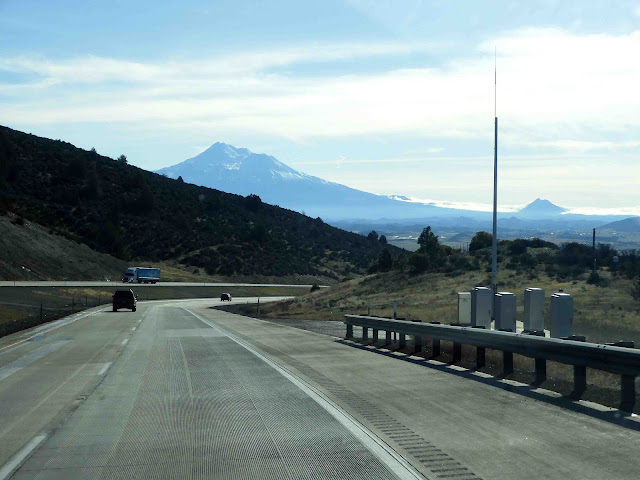 A truck was in my way as we crossed over the border, so I'm recycling this image from last year's trip. 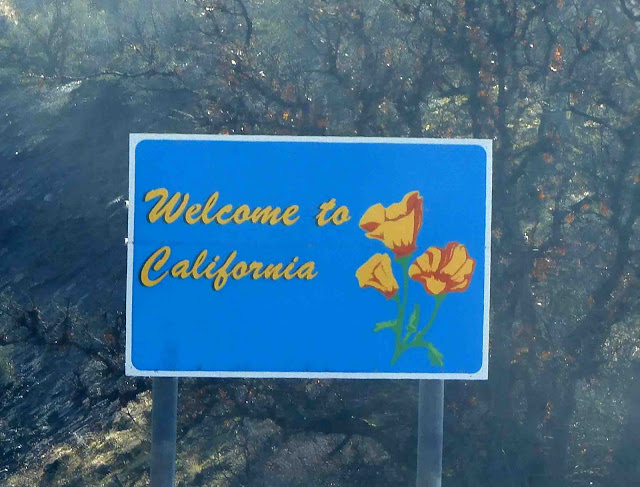 From there, Mt. Shasta dominated the skyline for many miles. 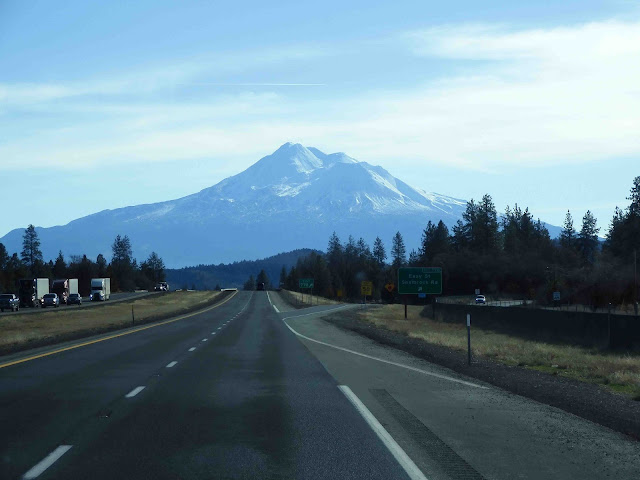 For as many times as I've seen it, I've never seen Black Butte enveloped in clouds like this. There's a small valley there where clouds had settled. To the east, Mt. Shasta was completely clear. 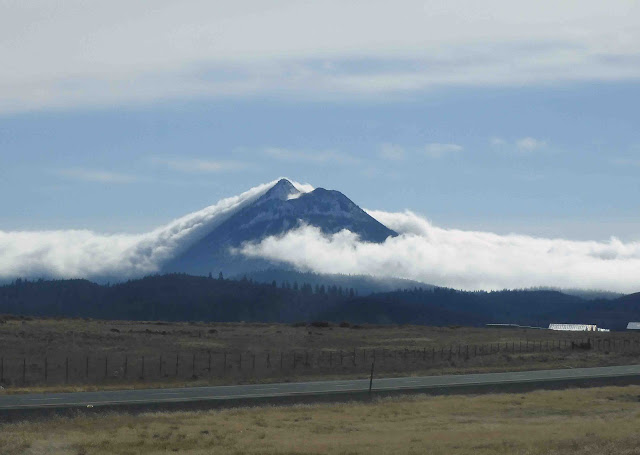 I took a few more barn pictures yesterday. I like this one at the foot of the mountain. 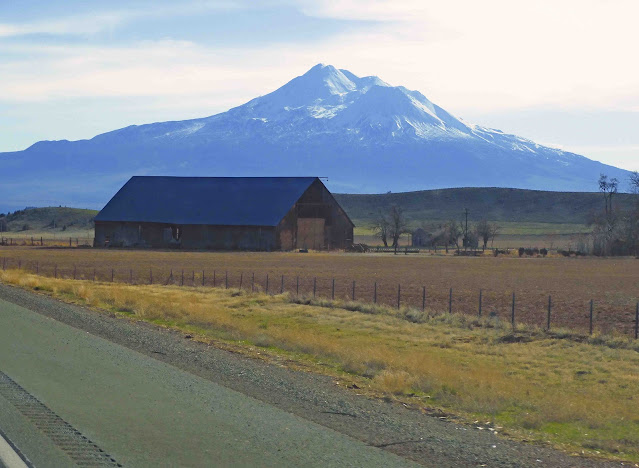 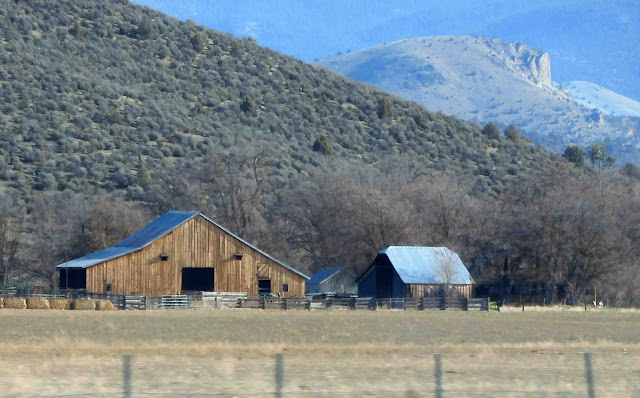 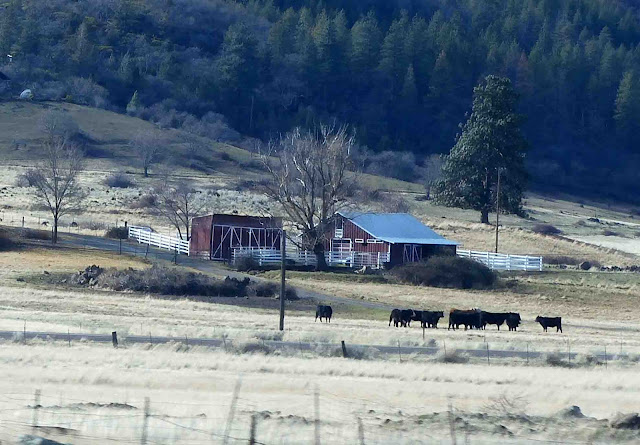 It's always heart-breaking to drive miles and miles through this scorched landscape. Fires seem to get worse in northern California every year, and so the scorched earth section extends farther each time we make the drive. 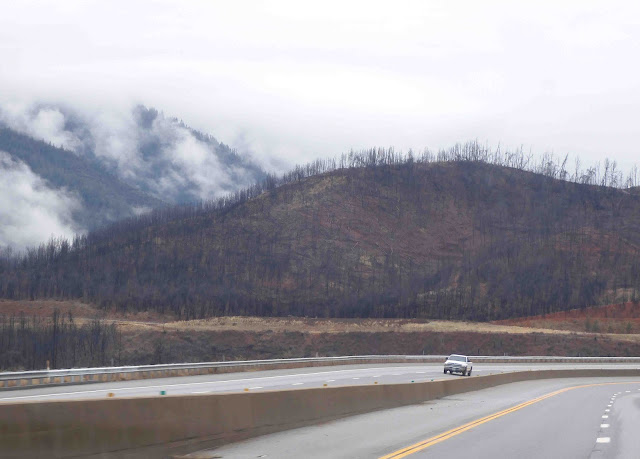 Also somewhat dispiriting, the level of Shasta Lake is as low as I've seen it in a long time. It's a little hard to get the shot over the guardrails of the bridge, but I think you get the idea. 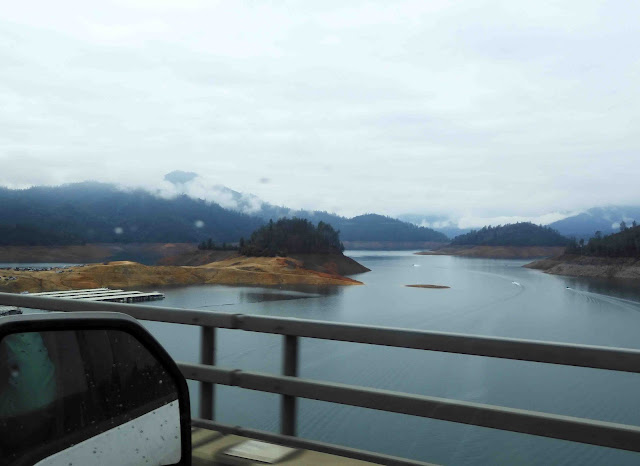 After having to move the RV to a new spot, Smitty was ready for some TLC last night. 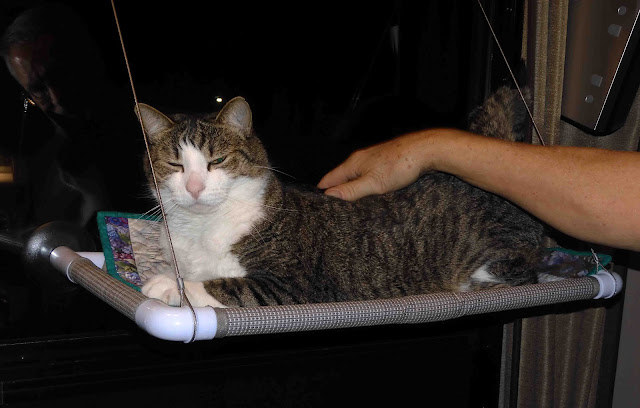 As I've mentioned before, he sometimes like to cross dress during these times of high stress. 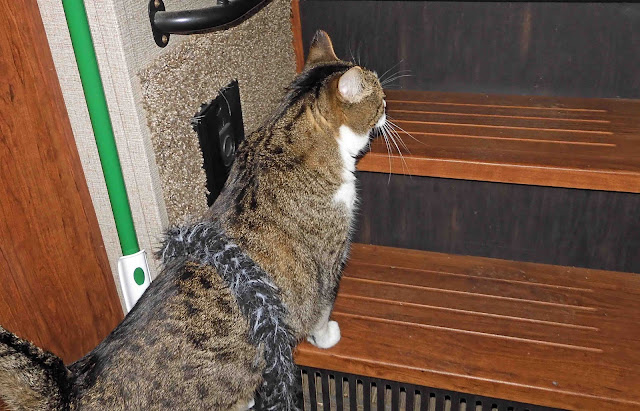 It makes him feel so hot, he has to stand next to a fire extinguisher, just in case he bursts into flames. 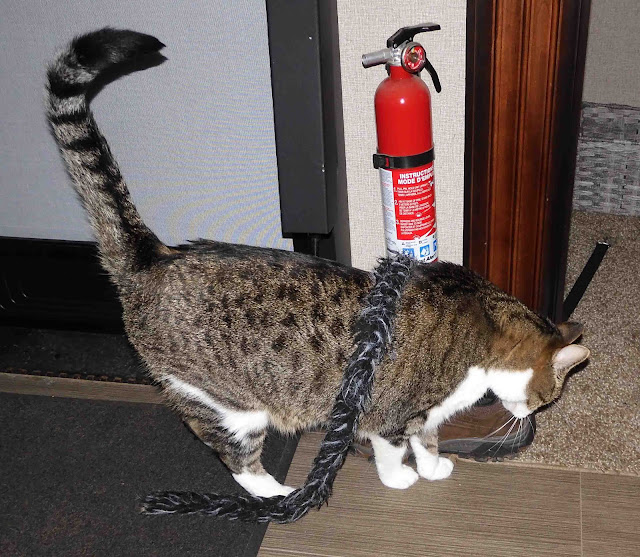 As you might guess, Sadie is completely put off by his self-indulgence. She retired to the bedroom to do her imitation of a speeding bullet. 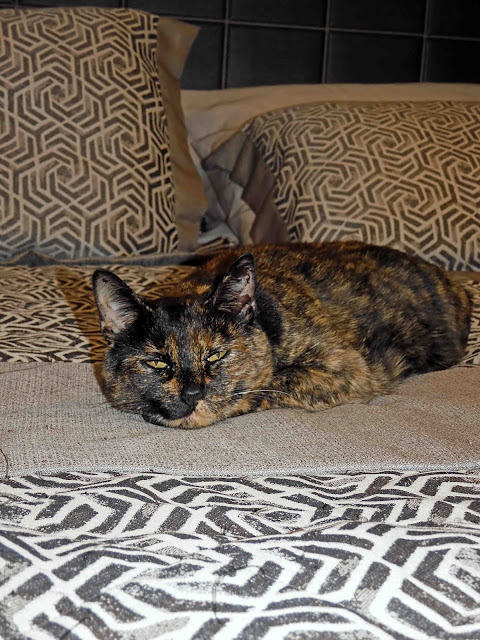 Smitty is helping me edit my pictures and write my post this morning. 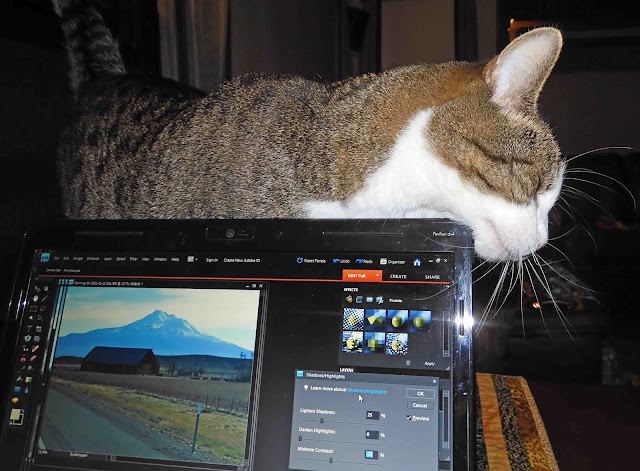 We want to get on the road early because we have a longer-than-expected drive today. (We both kind of remember discussing this when we made our original plans, but we both forgot until this morning.) So, time's a'wastin' and I need to get into the shower and make myself presentable for the day...as far as it goes. We'll be in Bakersfield by day's end.

How glorious a greeting the sun gives the mountains! ~ John Muir

That is a great moody sky picture. I'm learning how to paint skies at the moment and I might see how I can capture that look. It won't look anything like it's meant to but I'll enjoy doing it.

One of the things I miss about Oregon is the wonderful barns so thanks for sharing your photos.

Looks like a nice drive with beautiful scenery. I'm not sure if it is the picture, but it doesn't look like Mt. Shasta has all that much snow for this time of year. I'm a bit surprised as I would have thought with all the storms in the PNW it would have more. Maybe it was too warm with the earlier storms, but I sure hope it gets more snowpack this winter (but no snowing while you are off on your fun adventure). Enjoy.

MT Shasta is really beautiful with all those clouds swirling around it...
stay safe hugs, Julirose

Crabapple hill did show a photo of and the instructions for this years pattern--and cause my printer seems to like to keep copying the pattern--I have a complete set if you need me to send you a copy--
also--I do like the way she is doing this years--so I have sat down and designed my own lay out for it to be done all on one piece of cloth--like we have been doing--though it will be larger than we normally do--mine will be 15 x 20 or there's about!
safe travels--luv, di

What a wonderfully fun time :)

Safe travels! We are watching the snowfall here, hoping for a decent accumulation.

Hoping your travels are going well for Friday and weather is good. I love the photos. My mother would have wanted to paint one or two of them. I am glad those kitties are fantastic travelers. Only one of ours is and he wears a harness so we can grab him as he is very slick guy. Stay safe.

I see Black Butte was doing its dance of veils, as Mt Rainier often does... mysterious and modest, to a point!