A Day of Many Miles

As I mentioned yesterday, we'd forgotten how long yesterday's drive would be. It was right around 400 miles, and we were pooped pups by the time we got in. Sadie started her morning where she always does...snuggled up on a quilt. She especially likes this Shop Hop quilt. She likes looking at the blocks and reminding us she has been to all of the places shown. 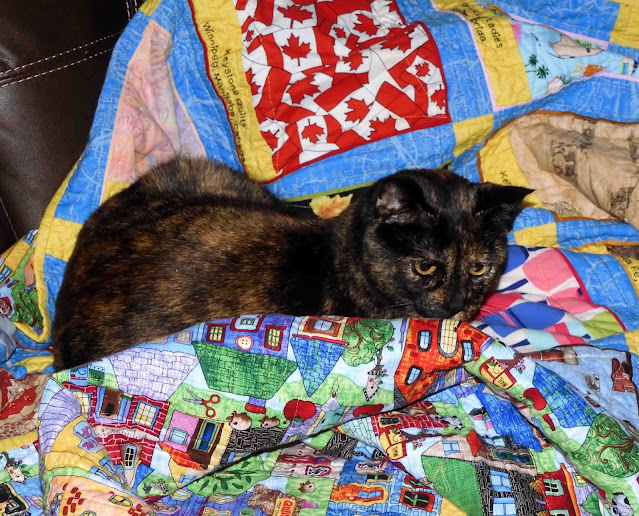 It was a day of driving and wide open spaces. This next image was taken just as we were leaving the RV park, and it pretty well sums up the choices in scenery. 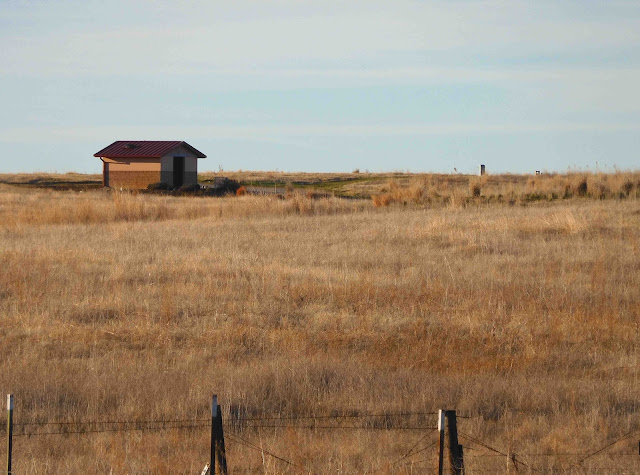 As we headed south, we were amused by the jet trails we saw. We were just north of Sacramento, and so I imagine these were flights heading in and out of the state capital. 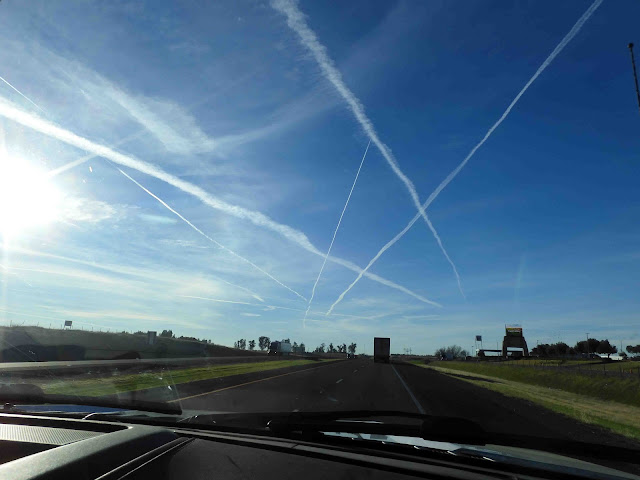 Along our way, we saw bazillions of migrating birds. You can see a sampling in the white streak crossing the middle of the image below. 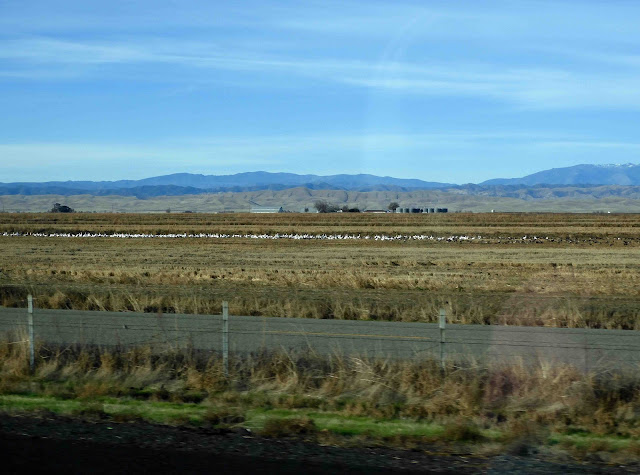 There were also dozens of hawks perched on fence posts as we went by. One can only think there are a lot of mice in those fields. This is an agricultural area, seemingly dedicated mostly to almonds and rice, but there were other crops growing as well. 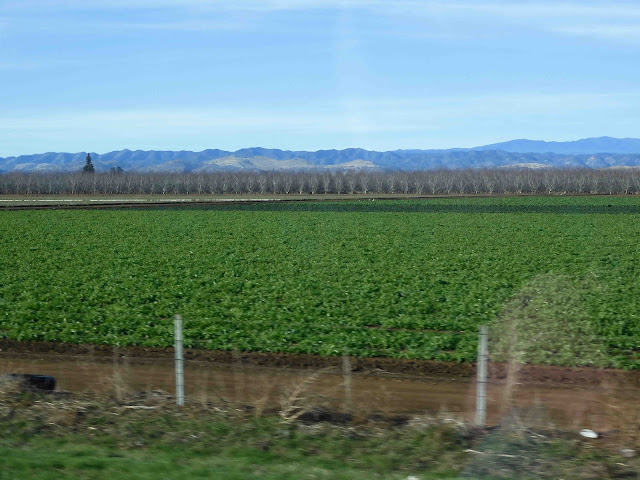 There weren't many barns, but I did capture a few. 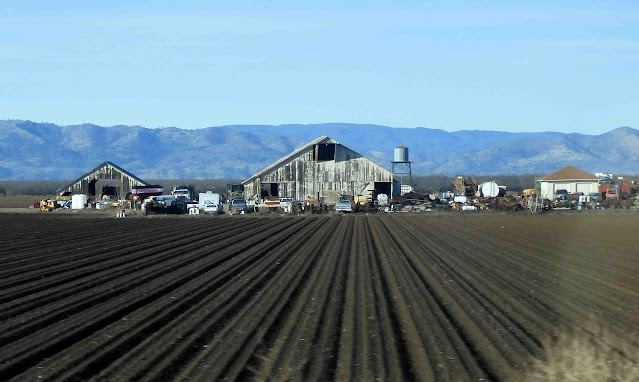 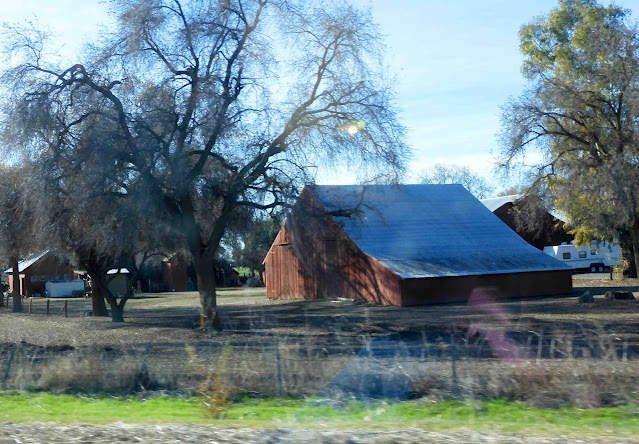 When we reached Sacramento, we drove through dense fog for quite some time. In the image below, we crossed the delta of the Sacramento River. Those are rice fields you see. 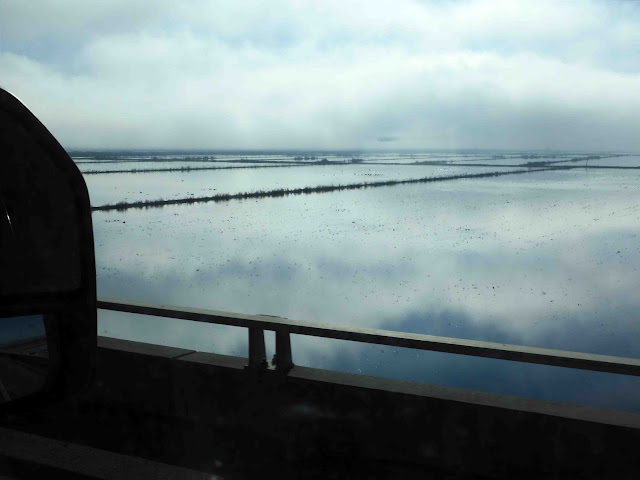 The fog brought an end to my picture taking for the day. When we were out of the fog, the sun was low in the sky, and any pictures would have been silhouettes against the bright sky. Smitty was exhausted after so much driving. He hopped up on his hammock for a nice evening nap. 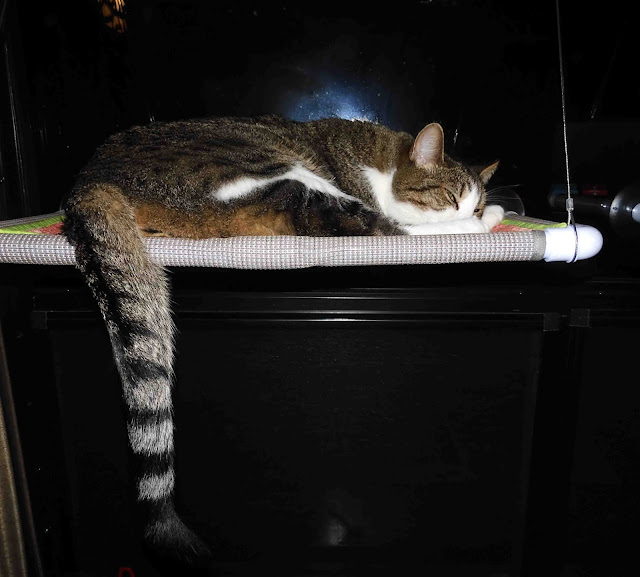 We will reach Pahrump, Nevada, today, and then we'll stay put for two weeks. We're looking forward to getting off the road and relaxing into less hectic mornings and less road grime. We'll be taking off again in a couple of hours.
We've been very careful in all of our interactions in California, using hand sanitizer obsessively and wearing masks whenever we are outside and interacting with others. Those interactions have been few. Mike is only out when he's putting fuel in the truck, and that can be done without going inside any structures to pay. I had to speak with someone last night and the night before when checking into the RV park. The first park was using precautions, but surprisingly, the woman in the RV park where we are now was not wearing a mask when I checked in. She stood no more than three feet away from me, although there was a counter between us. And wouldn't you think that in an area this close to Los Angeles where the virus is perhaps worse than anywhere else on the planet, someone interacting with the traveling public would want to protect herself and others? Yeesh. If we get sick, I'm blaming her.
So on that happy note, I'll leave you for the morning. By tomorrow, we'll be stopped dead in our tracks for a while. Kitty walks are on the horizon. Sewing is sure to follow.
Posted by Barbara at 6:54 AM

If you don’t know where you are going, any road will get you there. ~ Lewis Carroll

Beautiful scenery, but 400 miles is a long days drive. Good to hear you will soon be in Pahrump and able to stay put, relax & enjoy for awhile. I'm shocked the lady "working" at the RV park was not wearing a mask. No wonder California has such high covid rates. Glad you were masked up.

You know, some people, I've come to realize, are really stupid and uncaring!!
;000, I cannot believe no maak!!

That was a long drive for one day..
stay safe hugs, Julierose.

California is a big and diverse state, and attitudes about masks vary with the local politics! I'm not surprised to see that in Bakersfield. One can't blame the state's problems on places like that. The large number of cases in other counties, like Los Angeles, are not due to mask resistance, but more to poverty and crowded living conditions. Dot

Let's just all agree to a moratorium on phrases like "stopped dead in our tracks" for the time being, shall we? Stay safe.

Glad you have that long day behind you. Safe travels and happy kitty walks!

So glad you will be at your destination by now and can relax a bit. Too bad about the close encounter with the no-mask person - she should know better, particularly being in the hospitality business.

You are in Kevin McCarthy's District. My hubby talked to his high school reunion committee. They were meeting at a restaurant in Bakersfield last weekend. No restaurants are supposed to be open except for carry out. ICU beds are at 0%. Regardless, let’s focus on other adventures.

Glad to see kitties are enjoying the ride. Fog is usual in the winter in the San Joaquin Valley. When it gets really bad the CHP halts traffic then proceeds down a middle lane at a moderate pace so traffic is very controlled. Having a 60 car pile up is possible during times of Tule Fog. Let’s see how your adventures over the mountains are. It may be a foggy day until you get out of the Valley. Hopefully the rest of your trip is uneventful.

enjoyed your blog, let us know what it is like in Nevada. might be moving to Vegas.