We did all our running around town yesterday. We delivered packages to the post office, dropped off some donation items at Goodwill, picked up two big bags of birdseed at the feed store, and then went to the human feed store for groceries. My Christmas mask worn a few days early made me a little less grinchy at the grocery store yesterday. 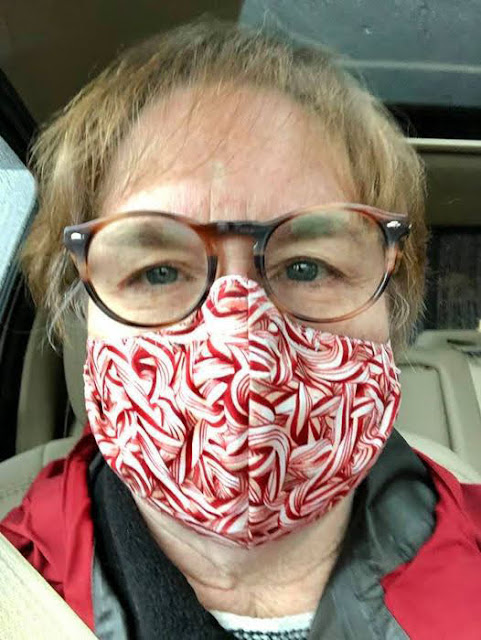 Looking at this picture reminds me that my nose is pretty well healed now. There is just the slightest ridge where the incision was made. I'm told I can massage that in a few weeks to help break up any scar tissue, but it really looks pretty good. There's just the slightest bit of bruising left, but I think it's safe to put this whole episode in the rear view mirror. There's so much that is best put behind us just now, don't you think?
When we got home, Smitty and Sadie were chomping at the bit to get outside. Sadie didn't stay out for long. It's wet and cold, and the fireplace is where she wants to be. Smitty, on the other hand, sat patiently for around half an hour, just as you see him below. He probably had his eye on a moving gopher mound. After a while, he came back to the house, empty-mouthed. Not all hunting expeditions end well, and so he came back inside to go hunting in his dry food bowl. 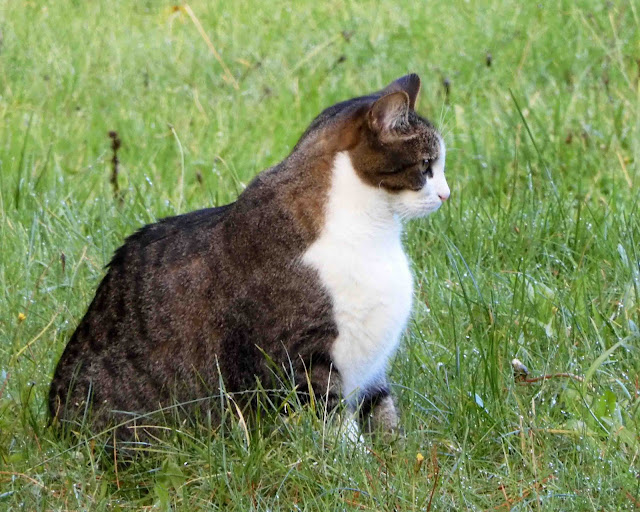 As you might guess, his "pawsterior" was a little damp. We have a special kitty towel set aside for these emergencies, and the kitties like it when they get dried off.
It was late in the day by the time I made it into the sewing room. I finished one of the "flower" blocks. Each one takes about 45 minutes to make. 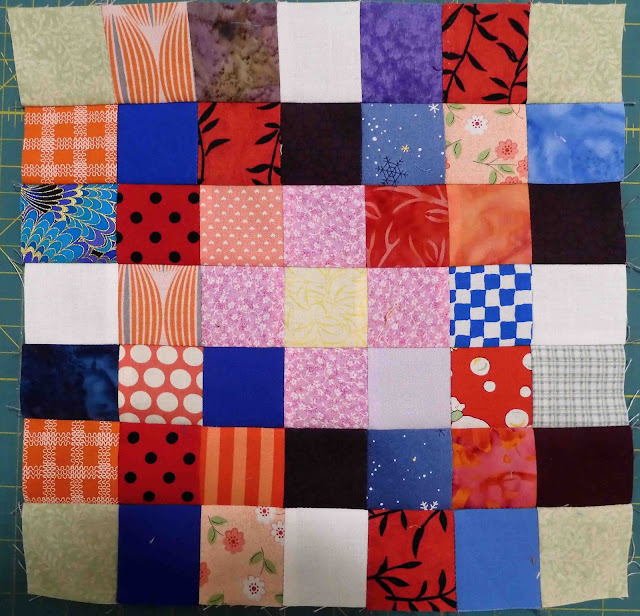 There was still a little time left in the day, and so I made one more. 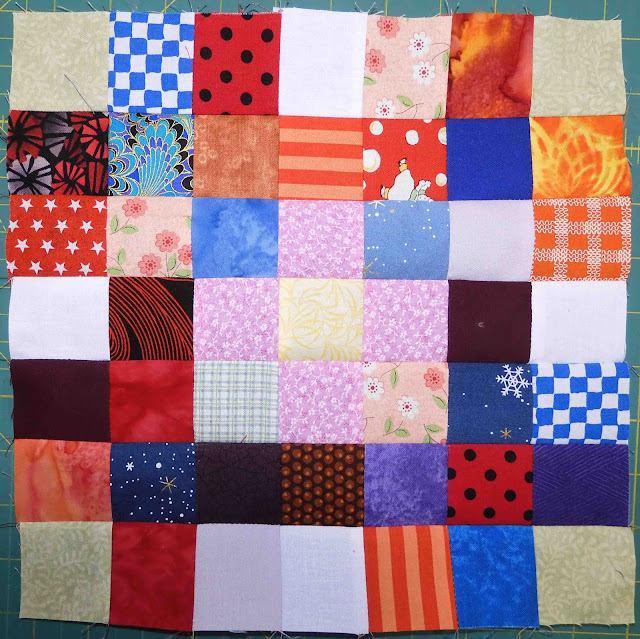 I laid the third one out on my little cutting mat. I like to lay them out this way, and then I can carry them to the sewing machine to be sewn together. This is how I left it when I quit for the day. 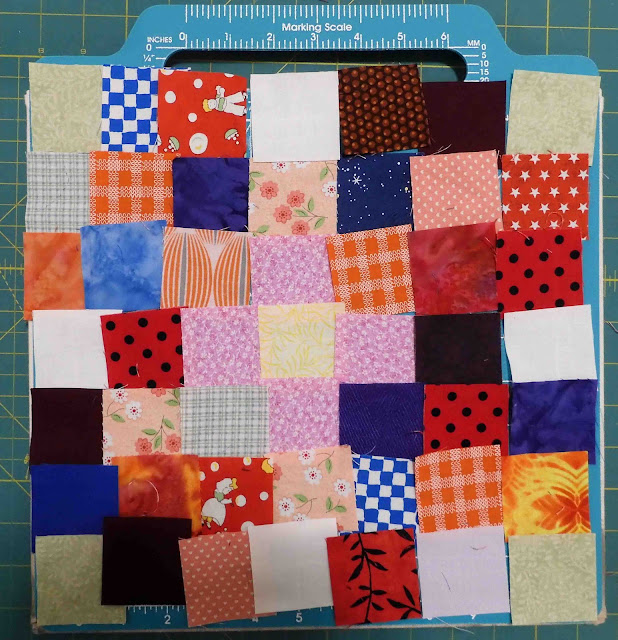 It was covered with a large ruler because...you know...elves. 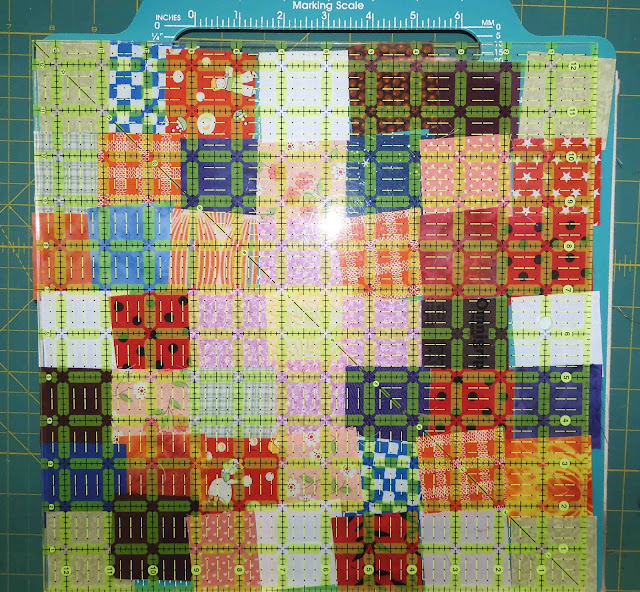 Today I should have no problem finishing up the third one, and then making the four "blanks" that will complete the 6th of 7 rows for this quilt.
For dinner last night, I tried another new recipe from the Cooking Light Diet. This is Cilantro-Lime Chicken with Avocado Salsa. This was really good and so simple to make. It's marinated for just three minutes in a mixture of fresh lime juice, cilantro, and olive oil. Then it's grilled, and topped with a simple salsa. I used the chicken breast fillets, rather than full chicken breasts, and so it cooked quickly on my grill pan. 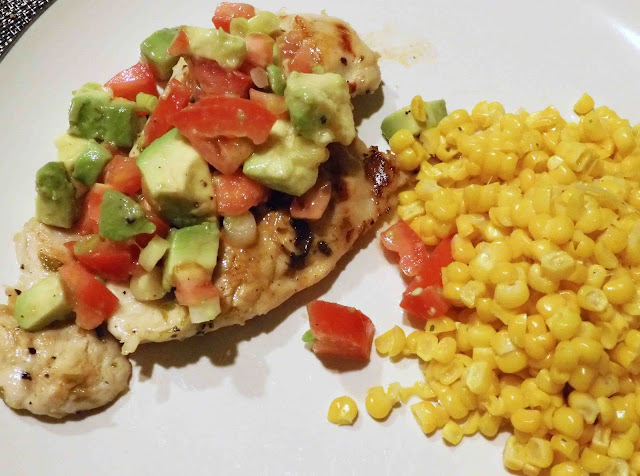 I served it with some of the corn we grew in the garden this past summer. The corn was taken off the cob, blanched, and then frozen. It was so sweet and tasty. The chicken recipe is easy enough to make in the RV, and so we'll be having this again for sure.
So I didn't do any of my housekeeping chores yesterday after such a grueling in-town adventure. I'll have to catch up today. I'll intersperse my chores with my block-making. The third flower block won't take long, and then I'll need for "blanks" to finish the row. After that, I'll move on to the next block for the Shop Hop 2.0 quilt. And let me just end by saying I'm very happy not to be going out again until after Thanksgiving.
Posted by Barbara at 8:09 AM

Any kid will run any errand for you, if you ask at bedtime. ~ Red Skelton

I hope you will share your method/recipe for turkey breast/roast in the slow cooker. I have one in our freezer from Canadian Thanksgiving in October. At the last minute, I changed my mind and cooked a whole turkey for us... and gave half to my neighbour so still have the frozen one. It seems to be that since we are normally in sunny, warm, Arizona at this time of year and I always hosted a huge pot luck dinner, that we should celebrate turkey day again, here in Canada? Plus, we get to eat turkey sandwiches for a few days after? But, I really have no clue how to cook the turkey breast to make it almost as great as a whole turkey?
Happy turkey day to you both.

Smitty is so handsome!

Love catching up on your posts and thanks again for showing us some of your travels. I know one of my goals in life is "to walk far without fatigue". Gee, I wish my sidekick, Murphy, the black Lab was as interested in what I am stitching as the kitties are. She is of no help and likes to have a nap in the sewing room and takes an interest only when paper gets scrunched in the way candy wrappers sound. That is almost never since I only eat Ginger Chews. Meanwhile, love how you are progressing with your various blocks. I like how you are playing it safe for Thanksgiving.

Even going grocery shopping how could one be a Grinch in a Christmas mask? I'm so pleased you nose episode is so well healed it has been relegated to done and dusted. In a year like 2020 procedures on your nose or anywhere really shouldn't be happening. That dinner looks really tasty and will fit our diet perfectly. I will try it out next week.

For my new scar I have applied Mederma it works really well at lighten the scar quickly. My scar is about 8 inches long for my shoulder replacement I started using is about a month after the surgery and the scar no longer has a bump and is turning whites I would apply and massage for just a few minutes once a day. Don’t want that scar attaching itself to bone.

We will have a quiet Thanksgiving this year. One of our daughters and family are coming over, but I watch her kids every week so we see one another often. My other two and their families are not going to be joining us to lessen the danger of germ spread. Not that any of use have been anywhere in forever.

Your Holiday Mask looks super...I can see why it made grocery shopping less onerous.
I, also, would like to hear how you do a turkey breast in the slow cooker; my last one in the oven was dry and awful!! And that is really why we are having chicken roast on Turkey-Day...

I started pre-cutting for scraps today and I hate it!! I am a cut-as-you-go person I guess...I mean why cut if you don't know what project (if any) you will use them for...just me I guess...

I made the minis' bindings today-- so tomorrow will be a binding day...

Stay safe now--our local Town cases have skyrocketed from 30 a month ago to 74 as of today and our schools have gone totally virtual. Troubling times..;000
Stay safe, hugs from very far away Julierose

You've reminded me that I should make some Christmas/winter masks. But maybe not today, since it's not a big rush - we're not going anywhere :-) You are looking good though! That dinner looks delicious, by the way.

Irksome errands indeed. Yesterday I did the dreaded grocery run and this morning it was off to the eye surgeon for the first step in getting cataracts looked after. Not a happy camper over either one. Later in the week I have to stop at the library and I want to make a pit stop to buy a toy for the Christmas drive. Had planned to go on Friday and then remembered - Black Friday. NOT going near a store so the toy buying will have to wait til next week.
Your supper looks delicious but I skidded to a halt over the cilantro. I can't bring myself to like that stuff despite trying to tell my taste buds that it's good. They aren't having any of it.

We did the irksome errand thing on Wednesday. But one of mine was to get quilt mailed out for quilting. So that was the fun part. Glad you got in some good stitching time. Your dinner looks great.