Have you ever noticed how a can of non-stick cooking spray will last way past the point when there seems to be nothing left in the can? Sometimes I can shake the can, sure there is nothing left inside, and yet...it continues to produce spray for another several days. I call it the "magic" part of the can. That's kind of how I feel about my spool of thread right now. As I'm sewing, I keep checking it to see how much is left. It seems to have less thread each time I look, but it keeps going, and going, and going. With each quilt block, I think I will run out, and then when it's finished, I check the spool again. It still has thread. This is how it looks this morning. 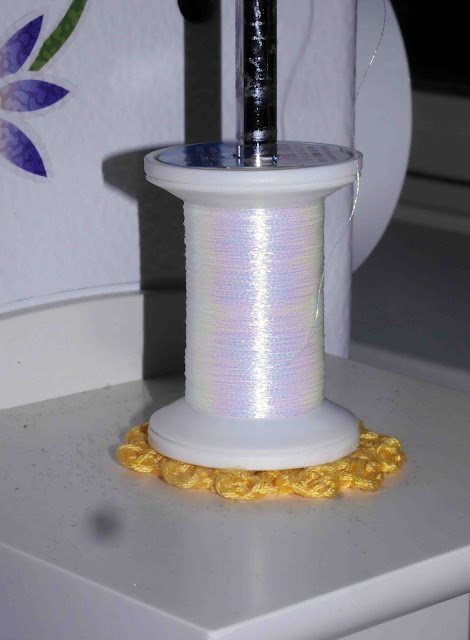 For yesterday's effort, I was certain I'd run out of thread before finishing even one block. One block down, and I still had thread. I think this might be the first block I embroidered when I started working on this project. 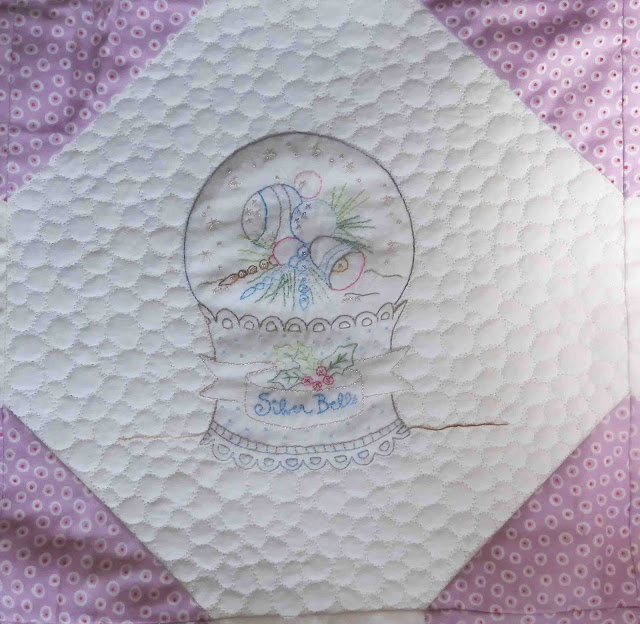 So, okay, still having thread, I quilted another. 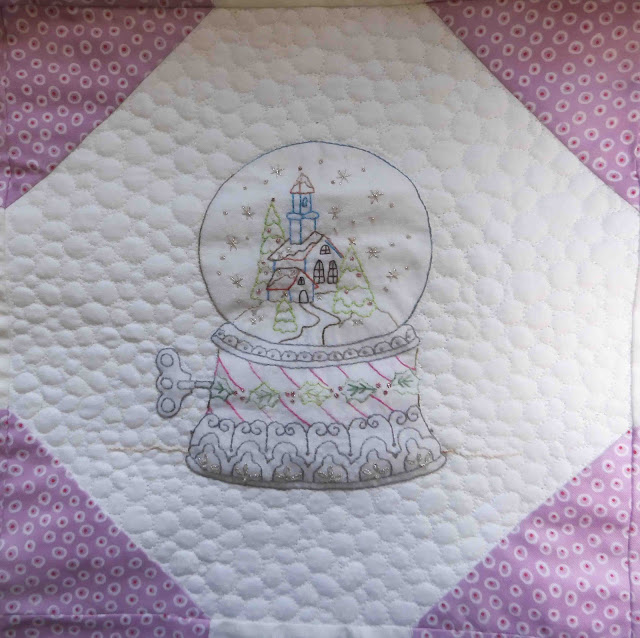 And still I have thread. Only two blocks were finished yesterday. I left the house at 9:30 for my 10:30 appointment. I'd been asked to check in at 10:15. At 10:50, I was still waiting to see the doctor, which put me in a bad mood. Oh well. Eventually, we got through it. All is well. I'm done for another year. At least, I hope I won't have any reason to see her until next year's annual physical. After that, I headed to the grocery store, which was mobbed. I dislike shopping on Monday because the aisles tend to be filled with huge carts, as employees restock the shelves after the weekend madness. On the other hand, is there ever really a good time to go grocery shopping? I think not. By 2:30, I was finally home, and you know I took a nap after that.

It's important on these venturing-out days to keep up with my slow-stitching. I was able to get some accomplished yesterday, and I've already done this morning's dose. Today's outing will be to the dentist, and so you can see why it's important to calm myself ahead of time. I've nearly filled the hoop on this position. There is just a little more to stitch inside the mason jar and on the pie crust. 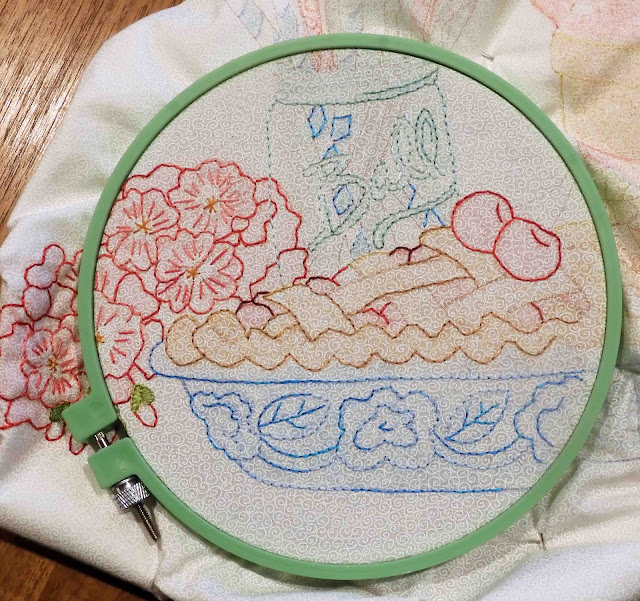 The kitties are doing their part in this endeavor. 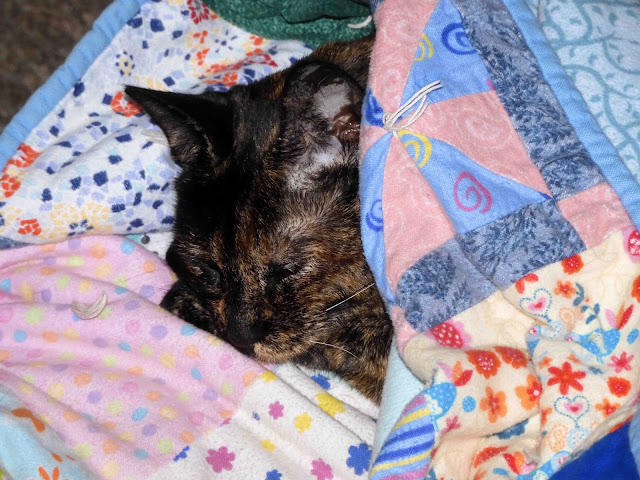 Looking at these two, I'd say Smitty is the more committed to doing his part. 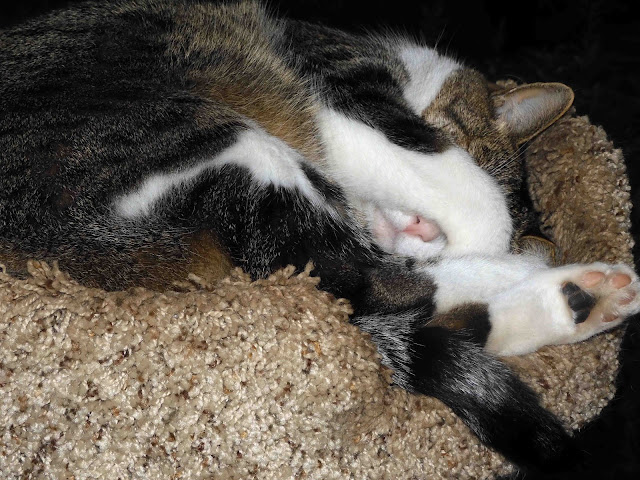 As I said, I'm heading off to the dentist this morning. The dentist is only half of the bad news. The drive to downtown Portland makes this adventure positively harrowing. I used to drive into downtown Portland every week. Now, I do it so seldom that even the anticipation seems downright dreadful. It almost always gives me road rage. Fortunately, I get to come home after that, and then not go out again until sometime next week.

So I'll get back to my quilting this afternoon, and I'll keep going as long as the thread holds out. The good news is that the new spool has shipped. I expect I'll have it in a day or two. There's plenty of other sewing to be done in the meantime.

It is strange how I never gave driving somewhere a thought before this isolation; now I get very edgy... not that we go anywhere very far...
Looks like you are making good progress on the quilting...
It must be "Magical" thread that never runs out...I always seem to run out at the very end of attaching a border--which is so annoying...
Resting still today...the neck is still sore...but getting better....
hugs, Julierose

Were you involved in the incident "Slow-moving Man Felled by Sweet Potato"? I heard it was at the Newberg Freddy's. 🤗
Annette M

Trust me, there is definitely not a crowd at the grocery store at 6 am. It's worth getting up that early to avoid the crowds. Whenever this pandemic is over I'm still going grocery shopping that early. Another side benefit is I can go the wrong way down the aisles and there is no one there to care!

Keep sweet talking that spool and you might just make it thru. Fabulous pebbling - one thing my machine hates to do. I like to do the grocery run early morning as well - in and out. If I have to take Mom, it has to be the afternoon as it takes most of the morning to get her out the door.

My dentist is a 2 block walk away from my house--doesn't make it a good "visit" in my head though. On the other hand my trip to the "Dr. of once a year visit fame" is in downtown Seattle. I have hated to go there for the last 4 years and now I REALY hate to go there. I have been asking for a referral to a Dr. in my "neighborhood" for these last 4 years--perhaps this year he will give me one :-) (and yes, I am at least 8 months behind schedule for my ordinary physical because of you know what and I don't want to go to downtown Seattle

Maybe this spool will last you until the next spool arrives. I have grocery shopping on the horizon - I've put it off long enough that we're going to have to be really creative with meals, so I think I'll have to go - tomorrow.

I think the fact that we're all not driving very much has led to us being nervous about it. Losing our 'edge' maybe. When I grocery shop I'm there when the store opens at 7 am (technically it's supposed to be open 7 - 8 am for seniors and health care workers only). That way it's a quick in and out, despite my absolute hatred of getting up that early! We're trying our best to avoid doctor visits but both of us have to go next month. NOT looking forward to that, along with the necessary visit to the lab for bloodwork that goes along with it. Yuck. Anxious to see how your game of Thread Chicken comes out!

I think that really IS a magic spool, lol. I have never been to Portland, but I absolutely hate the trip to Bakersfield. The highway drive is ok until we get into the town. On the other hand if we go left into Tehachapi the drive in is grueling with the semis all in low gear going up the mountains and in BOTH lanes but I love the little town with no traffic. Hope the dentist visit went ok.
xx, Caro;l