Happy Halloween! And happy last day of October! And happy "fall back" day! There's so much to be happy about today! For instance, I can look out my office window and see this tree in its fall foliage: 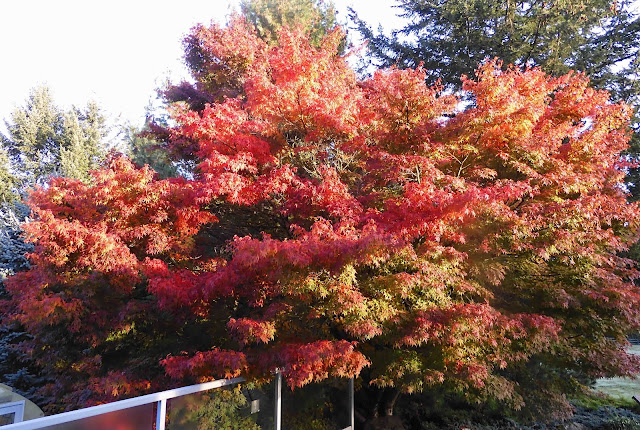 and that makes me happy!
So let's just talk about this quilt block, shall we? I was ready to decide on the final layout for the 12 Appalachian Memories blocks, and I was gnashing my teeth over the math. This first part was easy. Fussy cut a little quilt block from the larger fabric. I'll need 20 of these are there is lots of variation in the fabric. I'll be able to use a different one in each cornerstone. 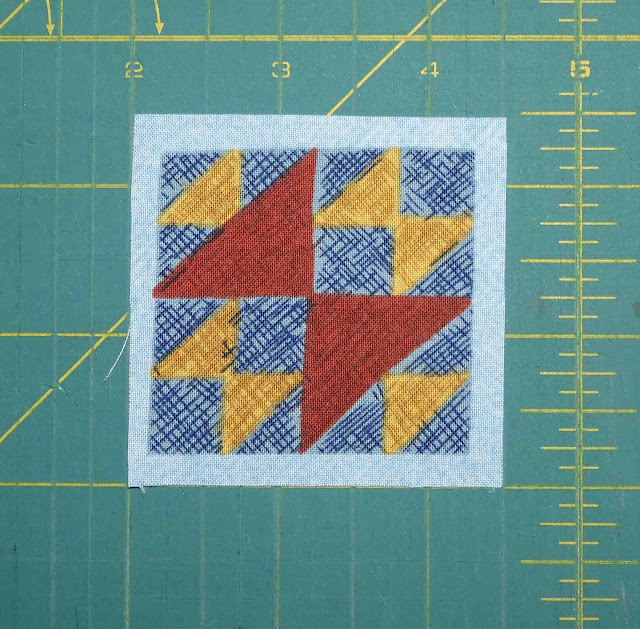 As I mentioned in yesterday's post, I'd found a tutorial that gave me all the measurements I'd need to finish with a 8-1/2 inch cornerstone. And I'll say that sounded large to me from the get-go, but that's how it was going to work out if I followed the directions that came with the pattern. Right away, I realized I had a problem because my center square was only 2-1/2 inches. There was no way to make it larger without cutting into the blocks surrounding the one I wanted. No problem, I said. I just added a 1-1/2 inch border around the quilt block and went from there. 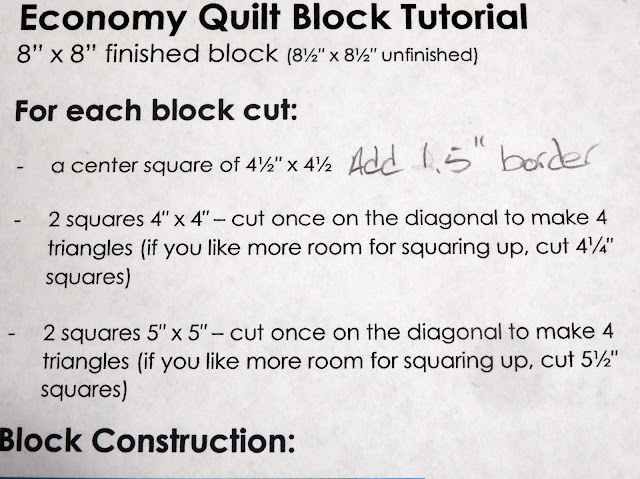 Fortunately, I have about a quarter yard left of the background fabric from the embroidered blocks, and so I'm using that. Unless I messed up, this should equal the desired 4-1/2 inches... 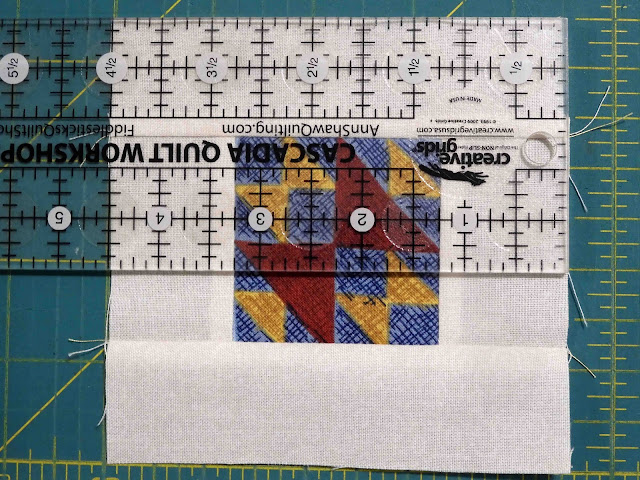 and it does. So far, so good.
So then, I moved onto step 2, which was to cut two 4-inch squares from the desired fabric, and cut them in half on the diagonal, giving me the four corners of the square-in-a square block. When that was finished, it was 6-1/2 inches. 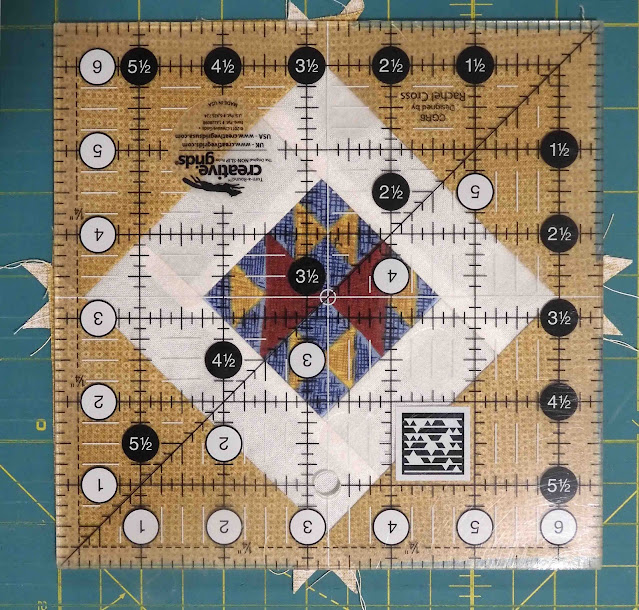 So that got me thinking. I like the little quilt blocks set on point. I'd lose that if I added another four corners around what I already had. That caused me to reconsider the size of the sashings. If I made them from three strips instead of four, I figured they'd come to 6-1/2 inches... 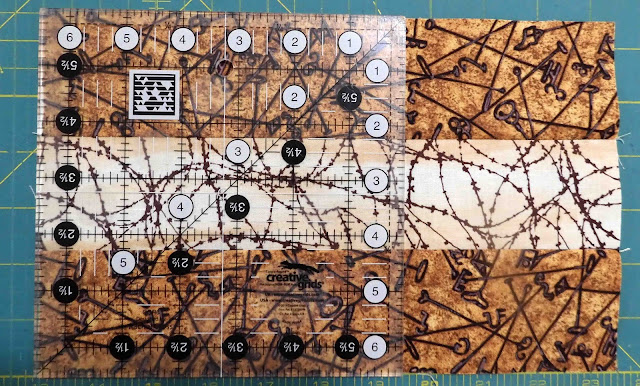 and they did. Yay! Quilter's math, you cannot defeat my brains of steel! As it turns out, this was the only way I could do this because I didn't have enough of that barbed wire fabric in the middle if I tried to make them wider.
Smitty was my support cat during this figuring process. While I was sewing, he was looking through the embroidered blocks. 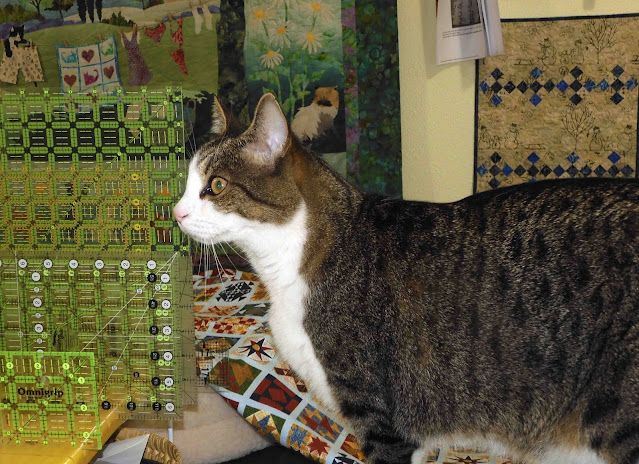 When he came to this one with the cardinal... 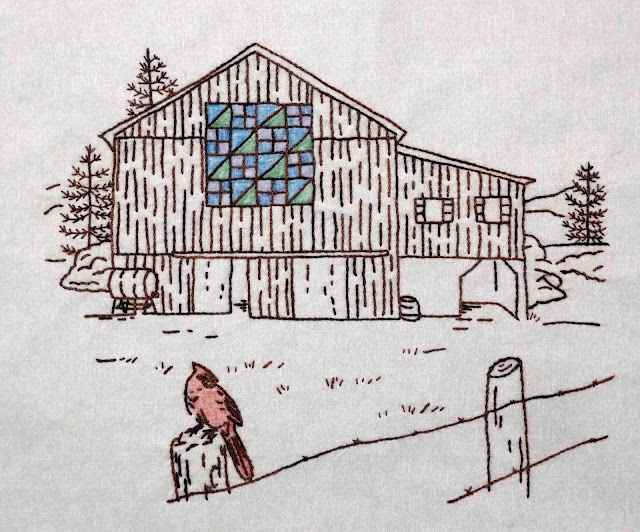 he thought it looked delicious.
Red meat is my favorite! 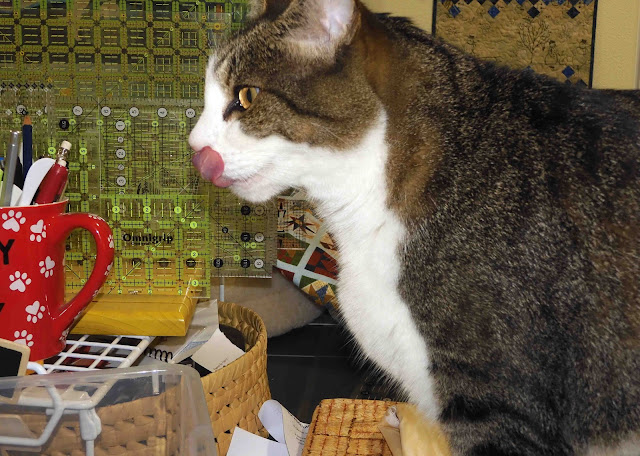 Okay, so I continued on. I needed four of these cornerstones for the first block. Here's the second one. 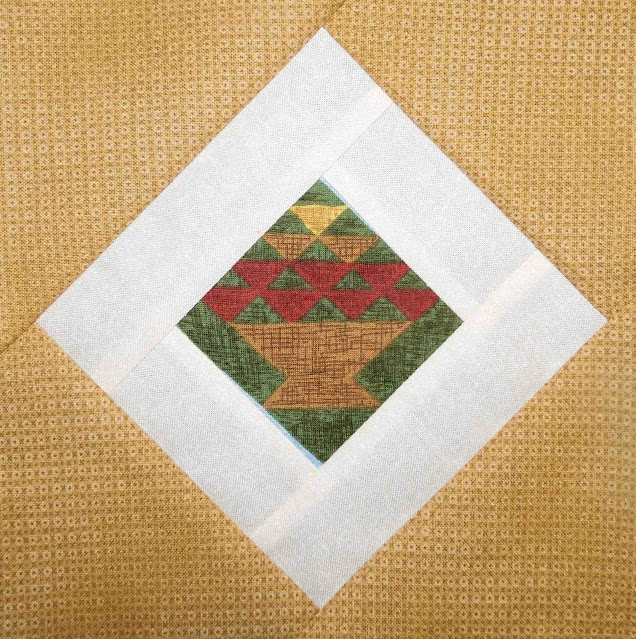 When I had four cornerstones, I sewed them to the block along with their sashings, and voila! The setting was decided. 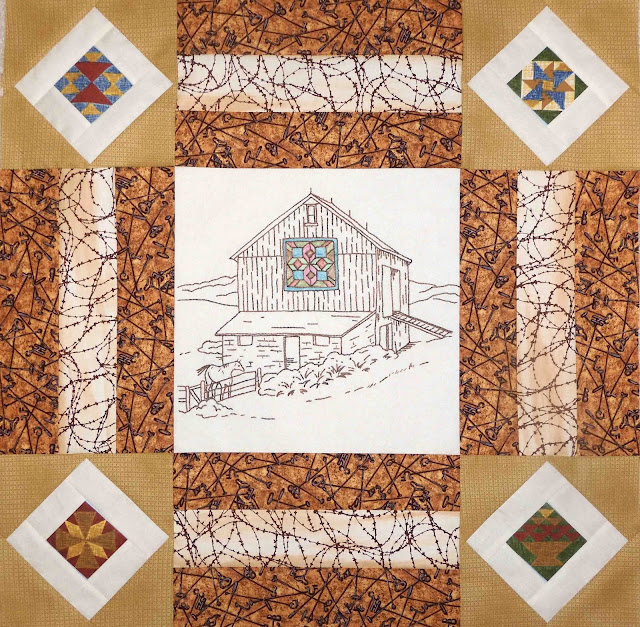 So, today I'll just keep going with this. The first block will be the most labor-intensive since I had to make all four sides. As I add blocks to the quilt, not all of them will require four cornerstones since they'll butt up against the block beside them. I'll get to work on this today, and just keep going until I'm finished, or until time runs out. Sewing these blocks into a finished flimsy will be my November 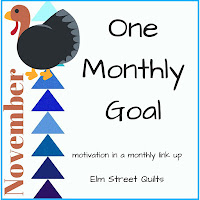 so I'll link up there when the party starts tomorrow.
There's nothing else going on today. I have a list of minor housekeeping chores. I'll do those as I finish each block, and so I'll be sewing and housekeeping throughout the day. Maybe I'll snuggle with some cats for a while.
We're not expecting any trick-or-treaters, since we've never had a single one in the previous 18 years of Halloween. I'll leave you with this quilt of Halloween past: The Grim Ripper. 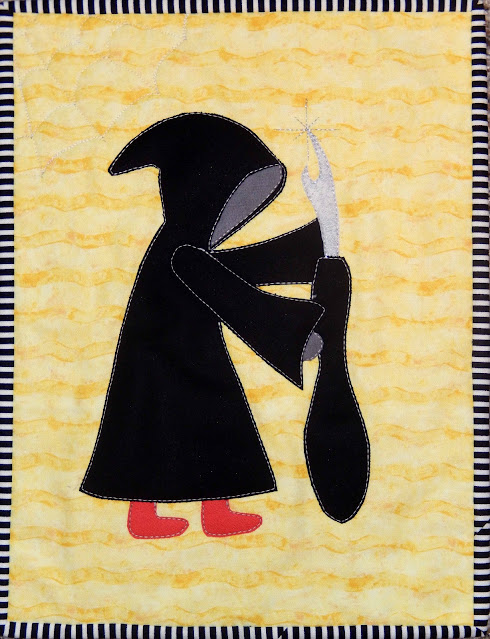 It's the scariest thing in my sewing room, for sure. Thanks to my new friend, "abelian," for pointing me in the direction of the new link to this free pattern.
Posted by Barbara at 9:27 AM

When black cats prowl and pumpkins gleam, may luck be yours on Halloween. ~ Unknown

That fall-adorned tree is amazing! And I love what you're doing with the barn setting, even though the math involved would require lots of lie-downs and gnashing of teeth if it were me. And the Grim Ripper made me laugh out loud - thank you!

I would have preferred this method rather than theirs for the sashings and corners. The added fussy blocks adds to the barn quilt block charm of this piece.

What a gorgeous tree, it does lighten the spirit. Your sashing are going to be fabulous, I mush prefer them to the original design. Tell Smitty there is lots of red meat here in mid Mich, but the blue is not neglected; we have had lots of blue jay and cardinal visitors this week! My grim ripper has been in plenty of use this month so it's nice to see him again in someone else's life.

Seams like this setting was meant to be! It will be uniquely yours, and Smitty's of course. I'm sure he'll be taking some credit for the idea.

I love those little cornerstones. Just right for that quilt.

I also liked the Grim Ripper, and discovered that the pattern link in your Gallery doesn't work any more. (Quilting Daily has redone their site.) But a search found that the pattern is still online at this site:

I'm new to your blog, and I'm enjoying your quilts and your cats. Dot

Well, this is a perfect setting for your Appalachian Barns, love it! We'll not have any Halloween trick or treaters either, have never had even one the entire time we lived in Oregon or here in our current abode. Country living at its best! Clear skies for our Halloween Blue Moon - looking forwrd to that.

Whew, so glad that math part is over. Your cornerstones look great on this quilt. No trick or treaters for us either. I guess our 1/4 mile dark dirt road is too scary for them.

I love the setting for the barn blocks and your tree is stunning but could you give a public announcement when you are going to be talking maths on a Saturday. I didn't think I'd need to use my brain today so I'd given it a day off. I had to lie down in a darkened room for a while to recover.

Math---who knew we'd need it after being out of school for so many years ????
Loving the quilt.

What a superb tree to have in view!!
You are amazing the way you worked out all those borders, I was totally lost. I must say your chosen materials work together really well.
X

The block is really nice, Barbara. This is going to be a lovely quilt. You've chosen such fun fabric!

I love what you've come up with for the borders...the fussy cutting is the perfect element for your embroidered barns. It was interesting to see your photographs the other day of the quilt barn trip you and your husband took...we have some in PA as well but I believe your part of the country definitely has more. Happy November!

The setting for your Barn Quilt is fantastic. I'll take your word for the quilt math. I've only had one cup of coffee so staying far away from math this early. Looking forward to seeing the finished flimsy!

I'm happy it was you and not me who had to figure out the math on those cornerstones. You did an excellent job, with help from your trusty assistant, of course. We chose not to participate in handing out treats and I can't really judge how much traffic there was. Now to go change the clocks that have the audacity to not change themselves.
Pat

Beautiful cornerstones, your block is lovely

Hi,
I really like the placement of your blocks for this quilt...it shows off the barn nicely....I'm terrible at math...so I always have trouble figuring out the measurements. Have a great day!

Congrats on your sashing and cornerstones. Your smaller version is much, much better looking than the original design since the embroidered blocks are larger than the sashings. Economy block math makes my head hurt, too, even though I have a cheat sheet (Studio180). I'm working on a Storm at Sea quilt and spent the better part of a day figuring out what sizes to cut all those component pieces. And I loved Geometry class!

I like how you framed the barn blocks. We had lots of trick-or-treaters, but we also live in town.

Looks like fun! Thanks for linking up with Elm Street Quilts One Monthly Goal and good luck with your project.