It was a nice sunny day for most of the day yesterday, but breezy and cold. Smitty and Sadie dearly wanted to be outside, but their winter coats aren't thick enough yet to stand up to the cold. They were in-and-out cats for a couple of hours before we called a halt and shut the door for the day.

The bowl on my embroidery piece is stitched now, and I've made my way to the flags. In this election season, it makes me feel downright patriotic. 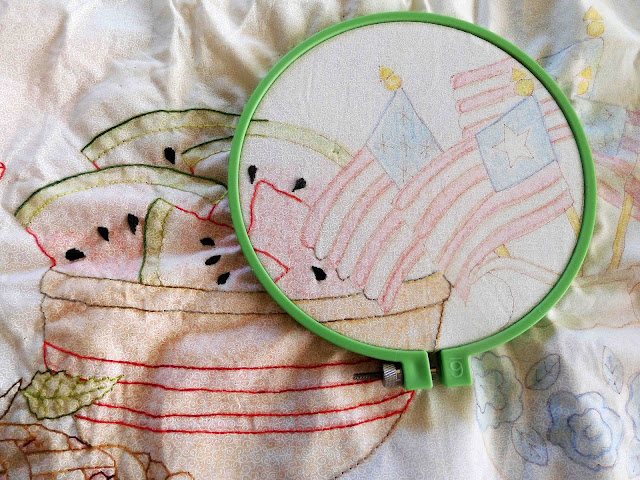 As I said yesterday, now that the bowl is stitched, I can say with confidence that I'm about halfway across this piece. This is the "short" piece on my embroidery dance card. When I started it, I wondered if it would be too large to finish all in one go-round. It looks like I'll be able to finish it off before moving on to the next one.
After that, I moved to sewing together the "Waste Not Whatnots" blocks. The largest was this one, and I was starting in what should end up to be the approximate middle of the quilt. I sashed it using black scraps from my black bin. Digging through the blacks, it was surprising how many solid black strips are there. I might be able to make the whole quilt without breaking into the black yardage. 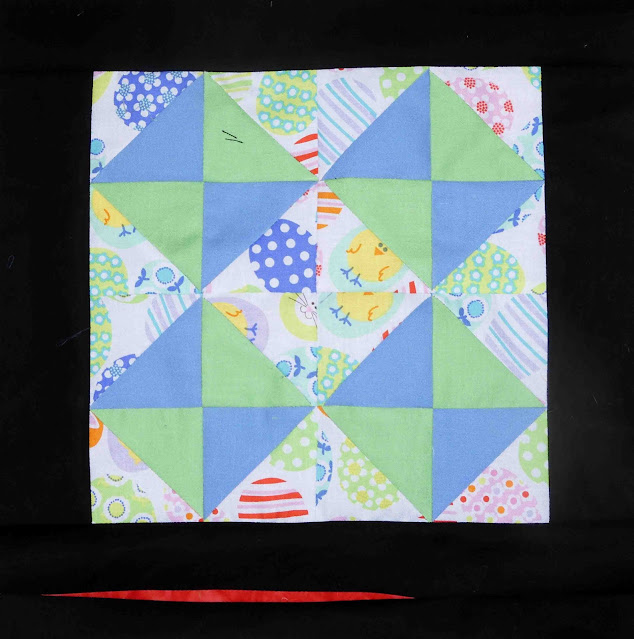 The little pop of color was an experiment, and I like that. Those little slivers will be added in throughout whenever I need to break up the black a little bit. Sadie was my consultant on this yesterday. It's good to have two cats so I'm seldom without an assistant. 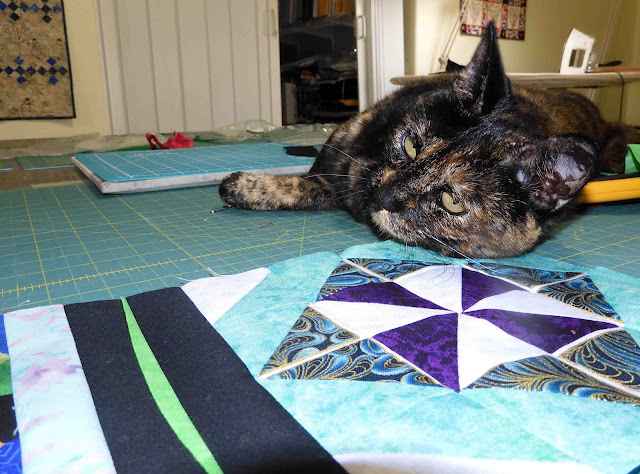 Two solid days of sewing made this less fun than I thought it would be. When I had it this far, I decided to take a break, and then never returned. This is where I left it: 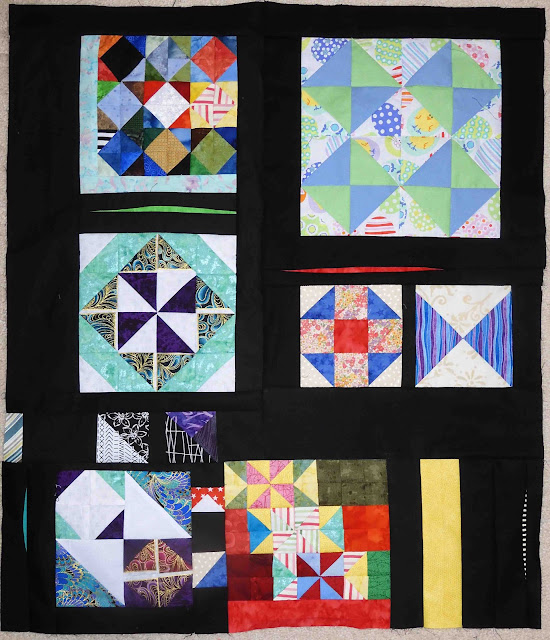 So I'll get back at it today, but this will require more time than I thought it would. I'm aiming to finish the quilt top by Sunday, but I have no idea whether that's realistic. It's kind of fun. I'm measuring and adding strips to get the sizes right. Even with measuring, I sometimes come up short or long. No problem. I can sew another strip here or there, or slice one off if I need to. Sewing without any pattern or plan leaves a lot of freedom of movement.
Mike and I have resumed the Cooking Light Diet in earnest. I don't like to admit when we're dieting because then I also have to confess when we're cheating. Nevertheless, we've been pretty good, with the exception of last weekend's lemon meringue pie. Some things are just too good to pass up. We like the Cooking Light Diet. The food is pretty simple to make, and it tastes surprisingly good. We hardly know we're dieting.
On last night's menu, I made something that seemed questionable, but it turned out to be really good. This is Barbecue Rotisserie Chicken with Cauliflower Grits. 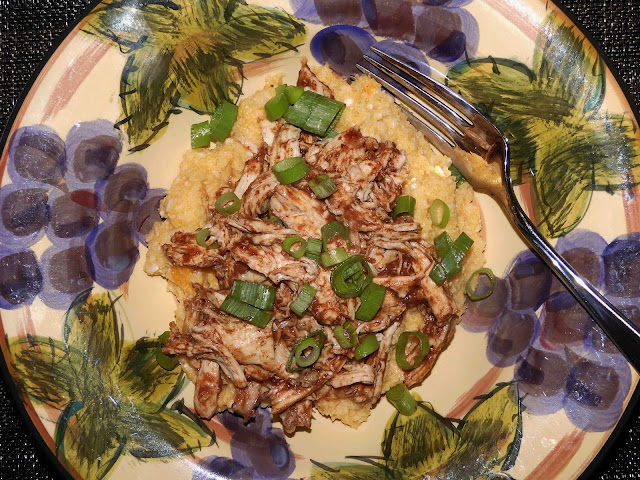 There is a question in my mind about grits and polenta. Aren't they the same thing? Is "polenta" just a snotty new name for grits? So I consulted The Google about this important culinary question and learned that grits are usually made with white corn (or hominy), while polenta is usually made with yellow corn. And that means that technically, this is more on the polenta side of things. It's important to know what you're eating and to use snotty proper names for things whenever they apply. You wouldn't want to appear gauche would you? Enough said.
So getting back to the recipe, this was made easier by using my own spicy plum barbecue sauce, canned last summer. Often, I find the recipes on the diet can be made easier by using ready-made ingredients, rather than starting from scratch every time. No doubt, it increases the calorie-count a little, but not significantly. The diet also includes an afternoon snack each day, and we never imbibe in the snack. It gives us a little leeway with the regular meals. This particular dish went together pretty quickly. The cauliflower was pureed in the food processor, and then cooked with some cornmeal and some chicken stock. Some sharp cheddar was added at the end, and that made it surprisingly flavorful. I used a rotisserie chicken from the grocery store, and heated it in the microwave after mixing it with some barbecue sauce. We had our doubts about how this would be, but it was pretty tasty, and simple enough to do in the RV...always a good feature in any new recipe.
So that was my day yesterday. I'll get back to my sewing today. If it's less windy and chilly, I might get out and do the weeding I've been threatening to do too. Maybe I'll really do some housekeeping chores today, although nothing says I can't put them off a little longer. I'm aiming for a Sunday finish to my quilt top. We'll just see how that goes.
What's going on in your sewing room today?
Posted by Barbara at 6:53 AM

Procrastination is the art of keeping up with yesterday. ~ Don Marquis

Love how that embroidery piece is coming...it will be a pretty one...
Good luck on your diet...that ship has sailed without me on it lately;000. [Ya think my hair must weigh a lot, too (haha)]
I fused "Starry Eyed Jack's face on this morning (ouch)...so far so good...my first fused project...
Hugs, Julierose

Such a stroke of brilliance to add those slivers of colour here and there! I would never have thought of that. Resident Chef and I have been watching our eating habits for the past year and I've lost 36 lbs and he's flirting with 60. Neither of us can believe how easy it's been (but, worse, we can't believe we didn't do it sooner!!)

Wow, it sounds like Fall has definitely arrived for you. I'm sewing blocks for the last quadrant of a King size quilt (nine sisters) which I hope to have ready to sandwich next week.

I do need to remember that quote in your first comment, pretty much describes my current state but turning it into an art form makes it so much more hip, don't you think?

I have a lot of orphan blocks that need to find a 'home'. One of my snowed in projects. I'm not a fan of grits no matter how they are made.

The black really does a nice job of evening out all the boldness of the scrappy blocks. I like those slivers of color here and there. Have fun playing with the rest of the blocks.

I like those little slices of color you are adding. It's fun and clever. We have some friends coming tomorrow, so I need to do some serious cleaning today. I'm hoping to get that done this morning, so I can sew this afternoon. All my commitments as far as quilting are done, so I can just play around. I have a few BOMs I should do, but eh, I may just do something else. I'm seriously considering the Cooking Light Diet. I know that I've asked before, but now that you've used it awhile, pros and cons?

I really like those slivers in the quilt. what a surprise and causes movement of the eye. Great idea.

My friend and I will finish up the last of the NICU smocks for premature babies today. Then I will start Christmas sewing. I have PJ knit pants in cow pattern for my daughter, SIL and their dogs, For 10 years the SIL has commented every Christmas his wife needs cow pants. Now the whole family will have them!

I'll be tweaking more on my Colorwash360 project from an online class with Wanda (Exurberant Color) and making more blocks for a baby quilt. Is the cooking light diet an actual book or are you just using recipes from the magazine? I don't need to lose weight, in fact, my doc wants me to gain a few pounds (boohoo, poor me, right?), but my husband could stand to shed some. Cold here, too. There might have been a light frost last night, but many things are still chugging along. Last year I wound up digging up dahlia tubers in the snow.
Pat

Snooty is as snooty does. It isn't just the color that differentiates grits and polenta. They're made from a different variety of corn, processed a little bit differently, and have a texture difference. But to that I say Phooey! If someone tells me they enjoy polenta but hate grits I just love pointing out that they're both cornmeal. So call me snooty if you must, but I blame Alton Brown. And I love grits!