Here we sit, unable to unpack. The fire near our home is considered 100% contained now, which is very good news. All roads are open. Fire personnel and equipment are gone. We are still at Level 2 evacuation orders, however, and so we don't feel comfortable unpacking until all risk is gone. You'll see in a moment why we're still at Level 2. And all of that to say that it's hard to establish or return to any kind of routine, which means I was pretty much a slug yesterday. I really hate coming to the end of a day having accomplished absolutely nothing. We even had leftovers for breakfast and for dinner. So, okay, I get credit for making sandwiches at lunch time, but that's it.

There was the slightest amount of progress made when I sat down at Eliza yesterday to get ready to quilt the Bag Ladies. They've been chilling through this whole episode...hanging out on my sewing chair. I asked them yesterday if they'd been nervous through this, but none of them said anything. I'm taking that as a "no." 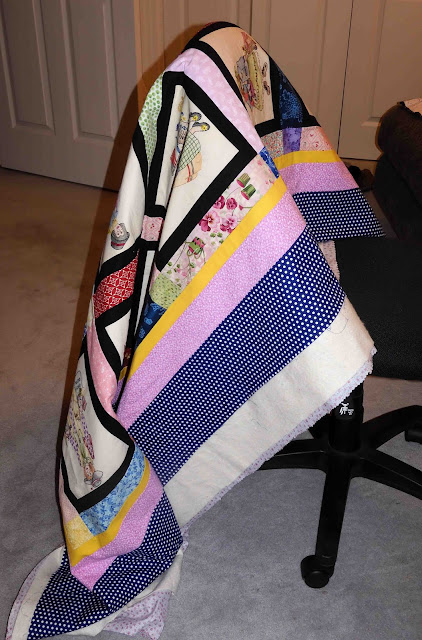 I was adjusting the bobbin tension when Mike asked me if I wanted to go for a ride on the ATV's. We'd talked about riding back into some of the fire areas. At first, I said no, but then decided to go along. And just to be clear, here's the photographic evidence that I actually did have good intentions. 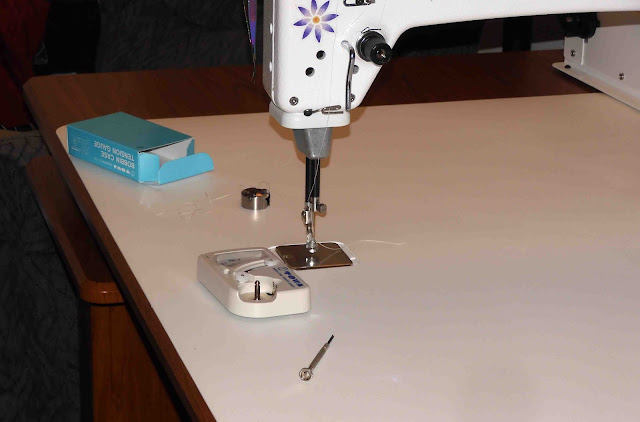 Earlier in the day, we'd ridden around on the public roads in the truck. It was stunning to see where the fire had burned right up to the edges of structures and fences without damaging either. There were some outbuildings lost in the fire, but places like this are doing fine. 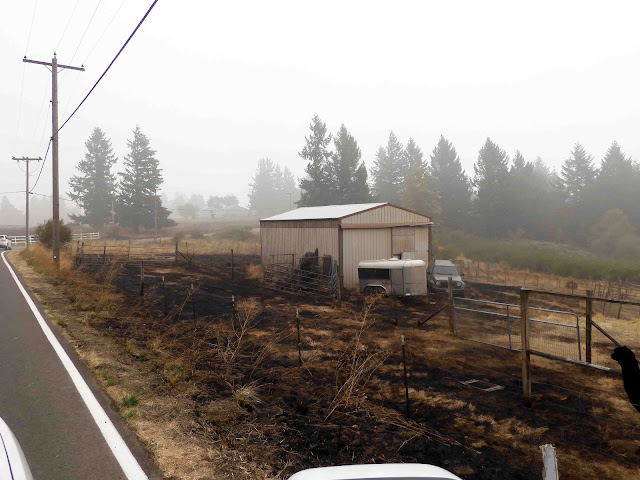 You've seen these places in old blog posts. The one above is where the llamas live. 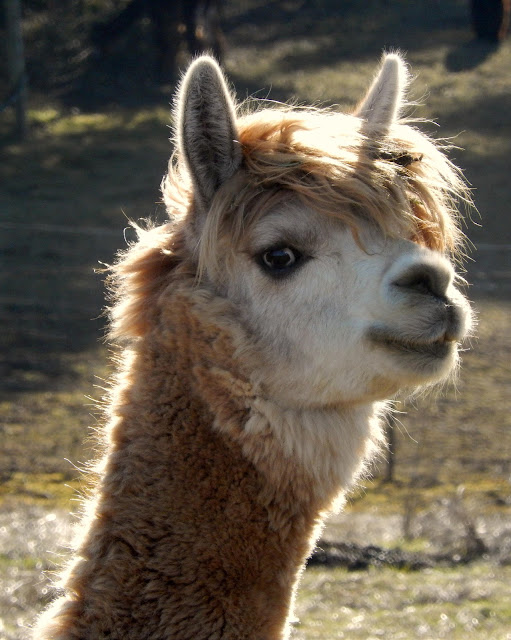 Across from the llamas is this pasture...not much good for grazing there right now. But the fence was saved. 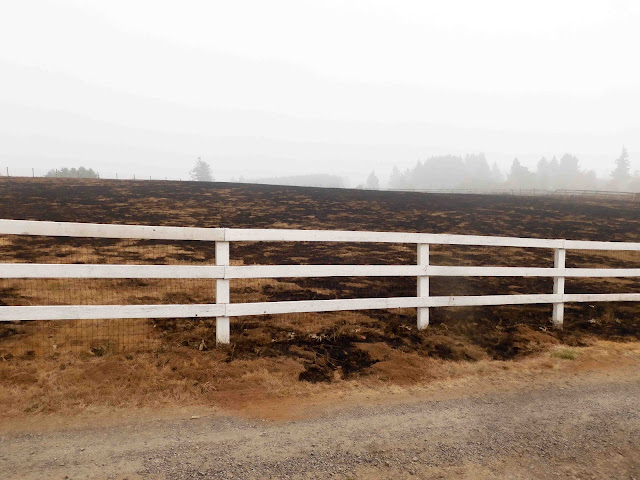 The pasture above is usually home to some friendly horses. 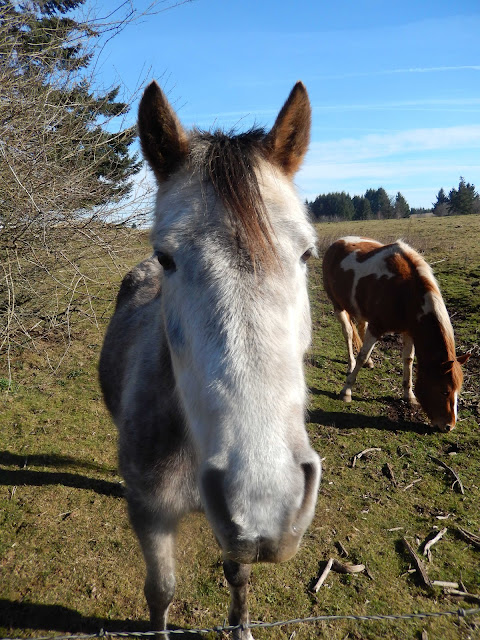 During the fire, there were plenty of announcements from private citizens, the fairgrounds, and our local extension service where people could house their evacuated livestock. One of our neighbors was missing a goat, but the goat was eventually found under their front porch, too scared to come out. I haven't heard whether they eventually coaxed her out.
The fire jumped the road at the top of the hill, which is when things got really serious. It just isn't that far into the town of Newberg, and I think losing entire communities in southern Oregon was on everyone's mind. Mainly, the fire seemed to blacken the dry grass and shrubs on the ground. 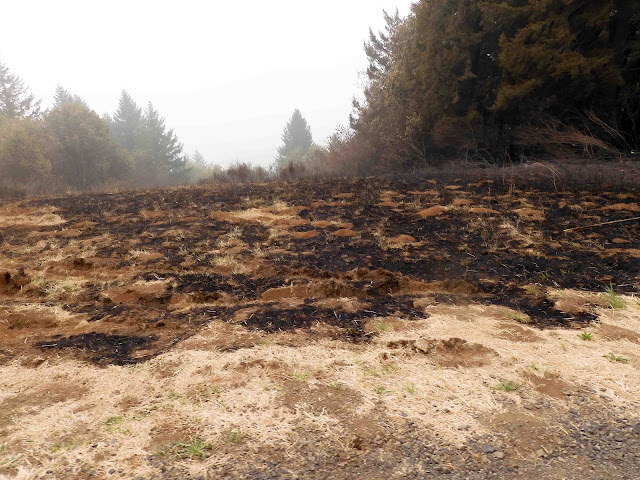 Taller trees are scorched at their bottoms, but the greenery seems pretty much alive at the top. They look as if they'll survive. The picture below was taken at the top of our hill. 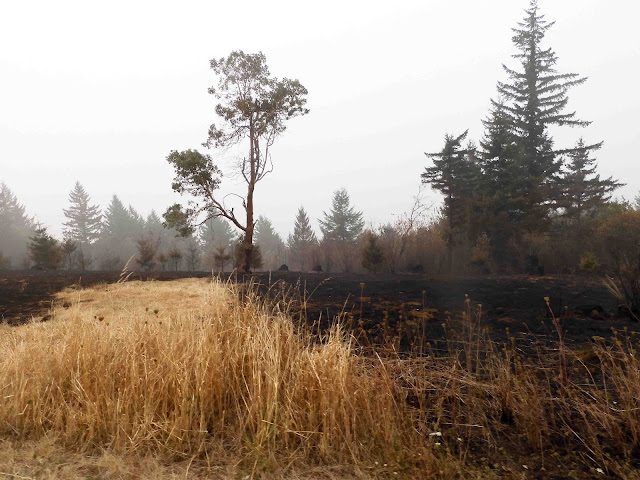 This next one was taken down below on a road farther down the hill. 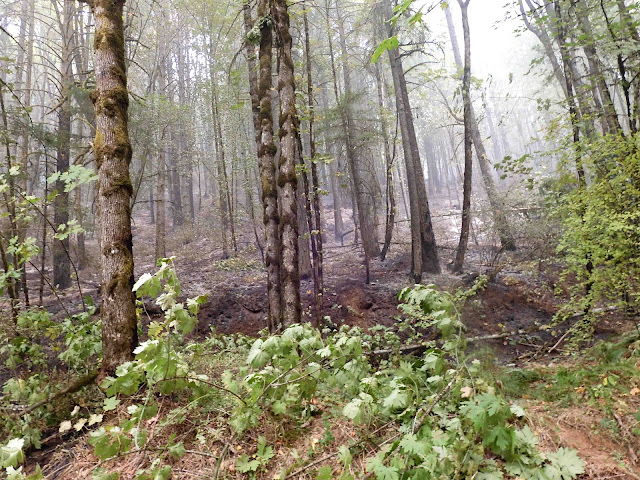 So when Mike asked me if I wanted to ride back on the ATV's, we took these roads, cut through the forest with a caterpillar tractor. It allows them to move heavy equipment in where the fire is, but also provides a fire line. There is no public water on our hill, which means there are no fire hydrants. This fire was fought with air support and by bringing in tanker after tanker of water. When they were empty of water, they had to go into town to fill up again. It's certainly not the most efficient way to fight a fire, and we pay higher premiums on our homeowner's insurance because of it. 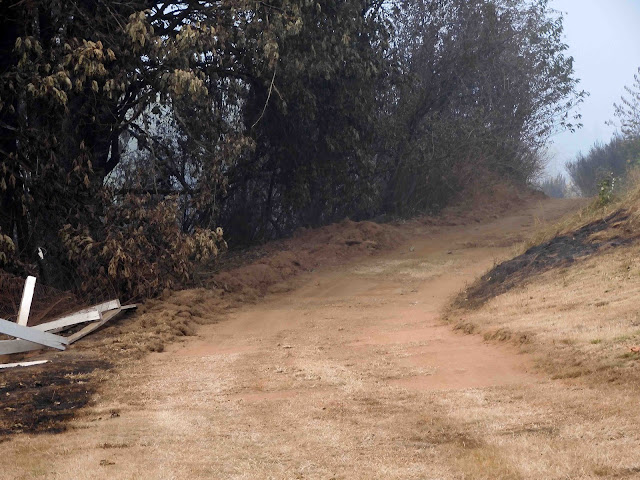 This is the same fence pictured earlier...just from a different side. A portion of it was damaged with the cutting of the road. You can see where the fire burned off to the left. 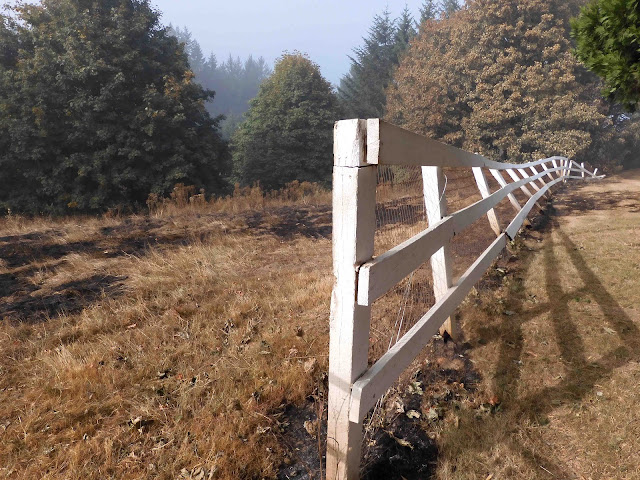 In some cases, trees were cut down to make way for the road. 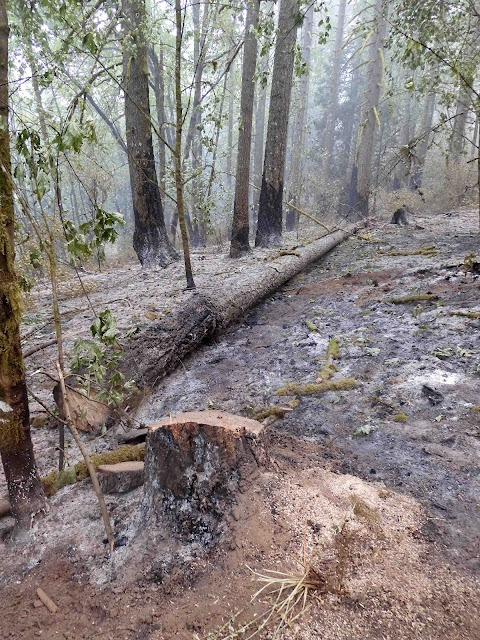 Back here everything was incinerated, and there were an awful lot of smoldering ashes. Come on, rain! 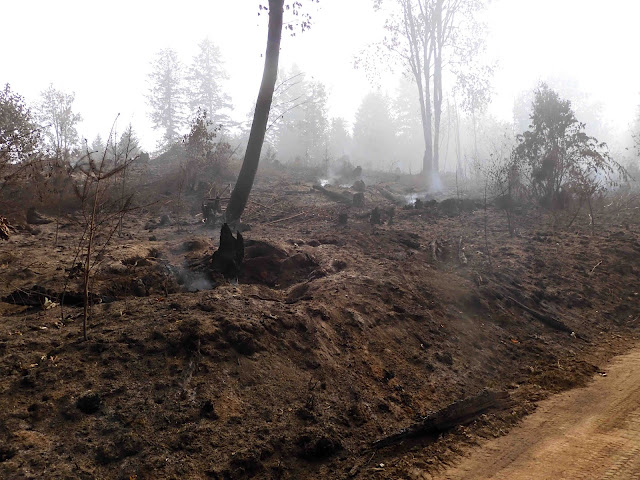 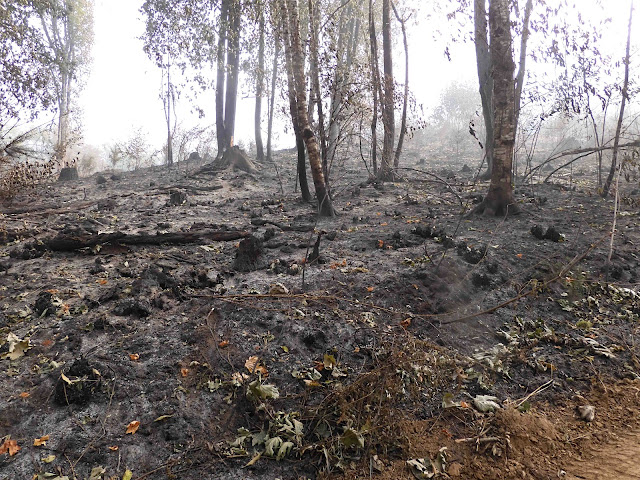 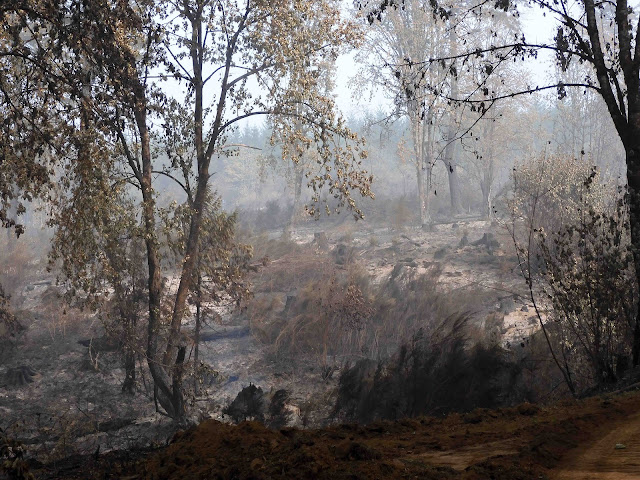 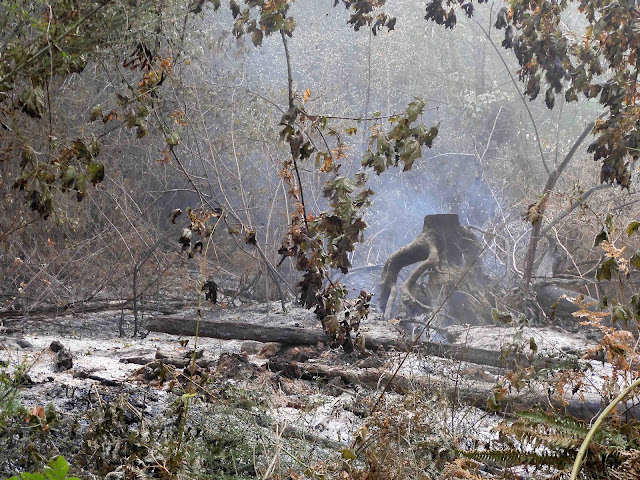 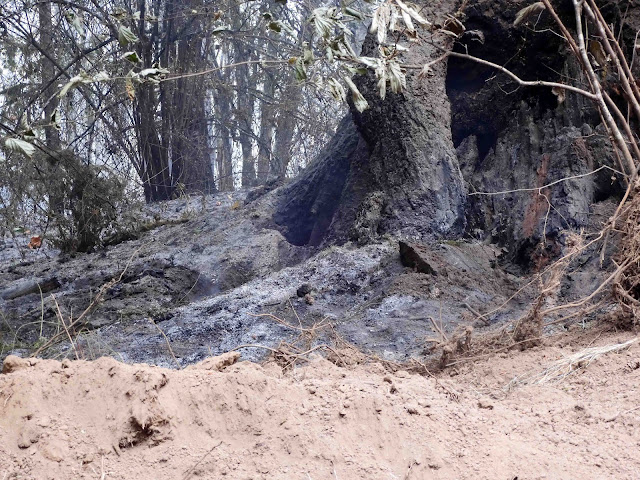 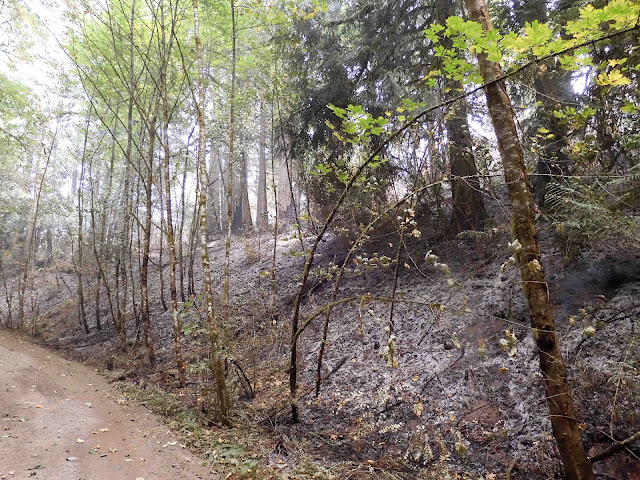 We did find one spot that concerned us a little. Mike and one of the nearby homeowners went to take a closer look. The homeowner decided to call the fire department. Better to nip any flames in the bud.
The good news is that our humidity is high. This morning, I noticed dew had settled over things. Even without rain, any moisture has to be good. Here's our weather forecast. Now it looks as if the rain won't come before Friday. Oy. 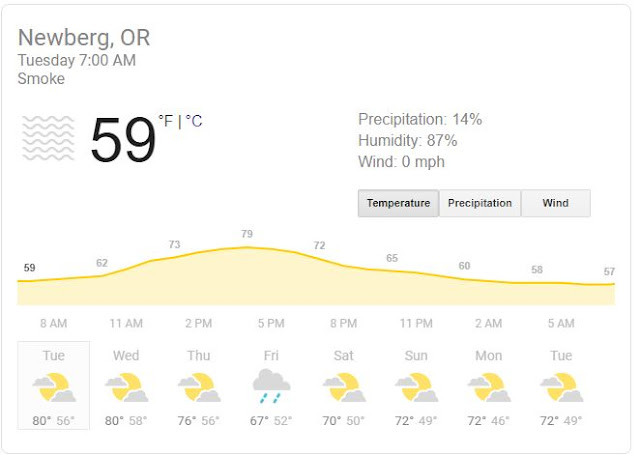 So, as I said earlier, the most I accomplished yesterday was making sandwiches for lunch. Today, I'm really going to strive to find something similar to my morning routine. And you should know, my friends, that when it comes to my routine, you are first on my list! So, Item 1: Write morning blog post...check! Item 2: Slow-stitching, and I'm heading there next. Slow stitching calms my frazzled nerves.
Of course, we always save plenty of room on our agenda for petting kitties. I didn't even take any pictures of them yesterday, which is very insulting, as you might imagine. I'm recycling some old ones. Y'all get weird, nervous, and thirsty when you don't see the kitties, so feast your eyes: 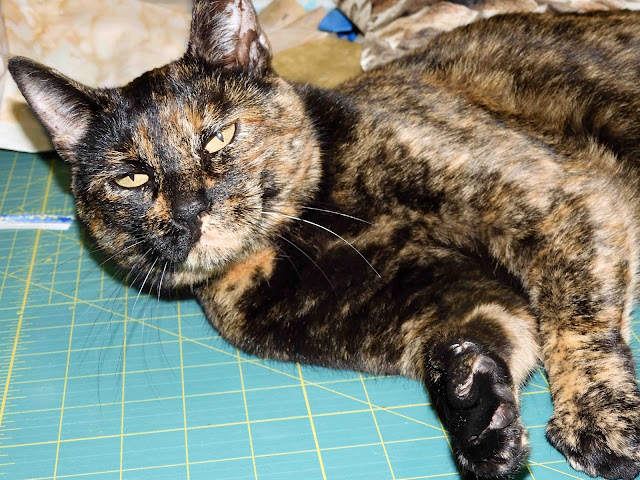 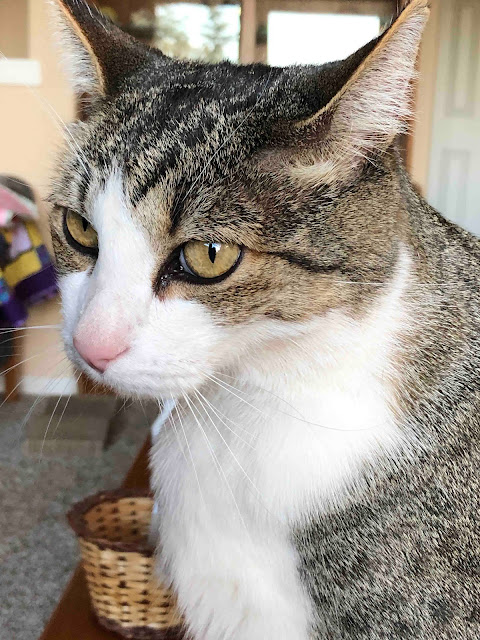 I'll probably check on the corn again today too. I'm getting close to being out of food for dinner, but corn chowder is going on the menu for next week. We'll probably find some time to take some down to the kids too. It would just be good to see them. So, okay. Routine, here I come. I'm going to get some quilting done today.

I can understand why it would be hard to settle into a routine before the rain comes. That's way too close for comfort! Yes, seeing the kitties is a necessity for those of us who are ailurophiles! lol

What amazing pictures Barbara! The kitties are gorgeous, as always. You've really brought the situation up close. I'm so grateful you and your family are safe.

I can surely see why you find yourself at "sixes and sevens"!! That is so close!!
Happy to hear you got back to your early morning embroidery--I know since I've started beginning my day that way [taking a page from your book;)) ] I find myself more centered for the rest of the day.

Boy, fires on top of covid...unbelievable...well, take care and stay safe...I am praying for rain for you-- (I would show you my specialty rain dance, but it is not a good visual!! )..
hugs and prayers for rains Julierose

Thank God the fires were contained all around you.

I'm one of those who said "Pack your quilts" ..... there's a whole difference between Grab & Go and Pack & Go.

If the former, I'd grab cats and dogs, important papers, DH's laptop and zip off to safety.

OTOH, if there was time to pack, I would grab my favorite quilts and paintings and the box of OLD photos. The paintings are by family/friends who have passed on and are irreplaceable.

Now that I'm thinking about it, those OLD photos need to be scanned. Our DD in NJ is a lover of our family's history, so the originals will eventually to go her.

Take Care! Stay Safe! May the Force Be With You!!!

Very scary seeing it so close and still smolding is a concern. Even if one little accomplishment is met - that is a well deserved pat on the back in this situation. Corn chowder sounds good - we are into soup weather at we have dropped into the 50
and 60's. Expecting frost next week - brrrrr.

I can understand why you are so discombobulated, but I'm glad you are finding your routine again. C'mon rain is right! I do hope it comes. The kitties are looking good. Stay safe, all of you. Seeing the kids will probably help too!

Wow, amazing how the flames seemed to have a mind of its own. In a year's time things will be green again, but trees take longer to reclaim their spots. Stay safe.

The tour of fire-scorched area is so disturbing. Can you also smell the char from all of it. Hope the animals are all safe, including the poor goat under the porch. Like you, I always feel off kilter when I've been unproductive during the day. It's happened more often during this pandemic, and you have the double whammy of the fire threat. All the best to you.

Talk about sobering photos! They're eerily beautiful (if that makes any sense whatsoever). I understand routine being a good thing but hard to settle your mind into that when so much has been happening around you. Please continue to be safe.
(btw - here in Ontario the smoke is affecting our skies, even from that great distance).

Early in the Covid lockdown, I just couldn't concentrate on anything. Even now, I spent too much time reading online new, quilt blogs and looking at Instagram instead of being productive. I know I will chastise myself later for not getting more done, but then I wonder who's going to care. Wishing the rains arrive soon to snuff out the smoldering rubble.
Pat

Yikes! That is close. Our firefighters have done such a tremendous job. I am amazed how they keep going and going from one frying pan into the fire day after day. After 30 days the wind shifted for a few days. So sorry for those who live east of us. It is a respite of just a couple of days before we go back in the 200+ AQI. We could finally open the doors and windows and air out the house. Our reading is 19 this morning.Yippee! I hear your air quality was the worse on earth yesterday. Lest hope the dew settles that down. We had almost a week of "worse air quality" then it settled into the mid to high 200’s.

Continue to stay safe. Let’s hope your daily routines will have no unexpected interruptions.

Sew very glad y'all are safe, that the fires were not worse, and thank you for the pictures. They are encouraging. Have a much better day today! You always are the energizer bunny!