The day didn't go exactly as planned yesterday, but it was so nice to take another day off from canning. As I mentioned, Mike and I made a trip into town. We first stopped off at Working Hands Farm to pick up 40 pounds of tomatoes. They grow the most beautiful tomatoes. Here's one box of 20 pounds. And there's another just like it. 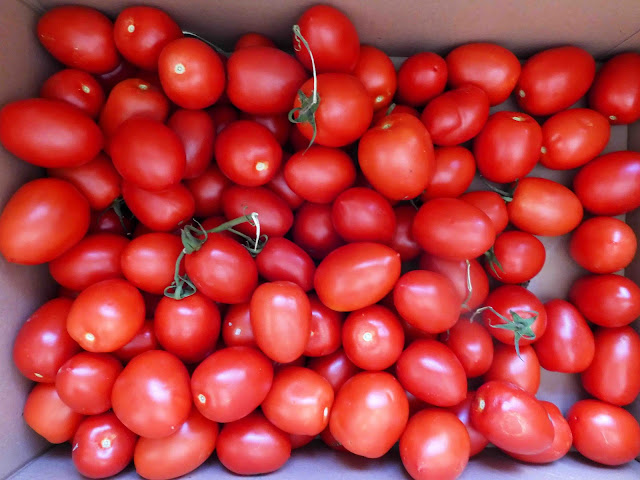 Also, I've harvested about two dozen from our own plants. Our own plants are producing fast and furious now. 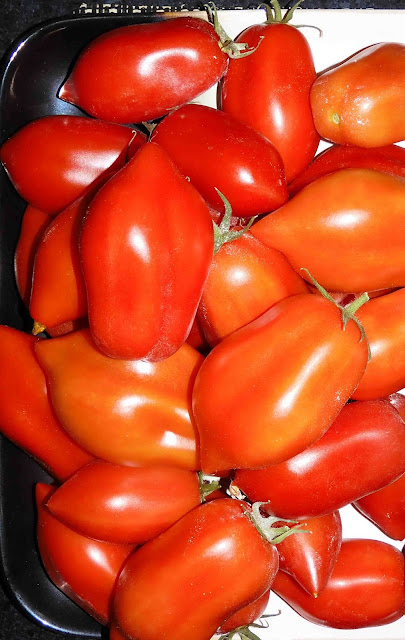 The tomatoes are going to get turned into pasta sauce and salsa, and maybe some tomato jam, depending on how many I get.
From the vegetable garden, I harvested about half a bowl of green beans. They seem to be slowing down a little bit. I have these, plus two gallon zip-lock bags full of beans. Today, I'll be canning six more jars. The rest will either get eaten or frozen. Either way, today will be my last day canning green beans. 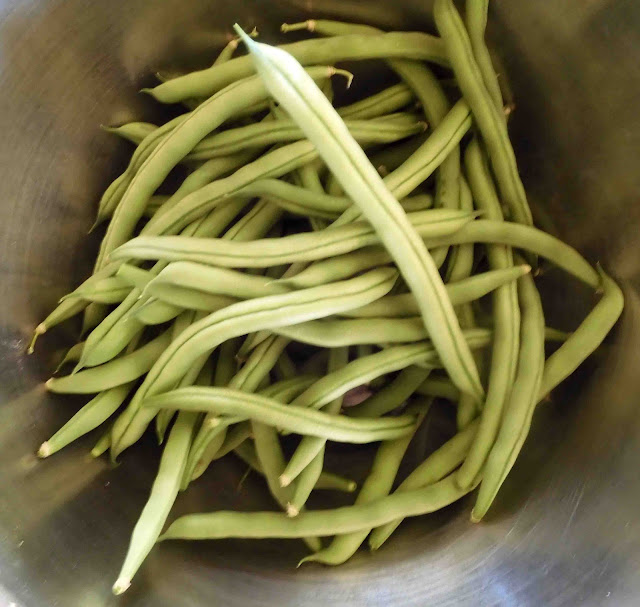 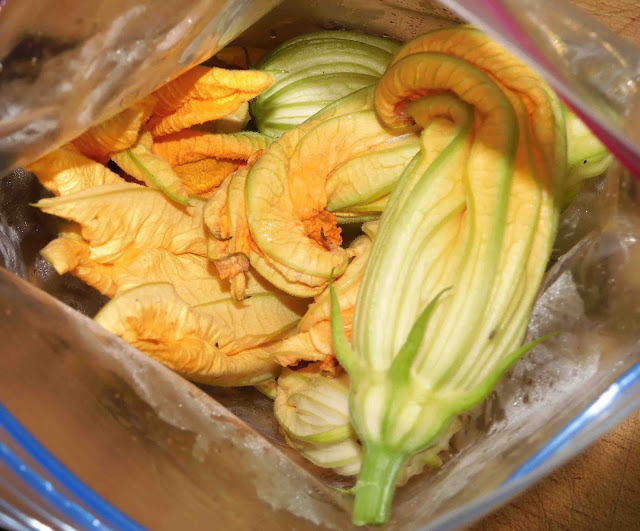 I picked them directly into a zip-lock bag because I didn't want to handle them too much. This video I watched seemed to emphasize how "delicate" they are.
I'll be doing something different with mine, but I might like to try this stuffed version some time.
The corn has me a little worried. We're leaving on our trip in about 10 days. I'm really hoping some will be ready before we leave. There's still time, so my fingers are crossed. 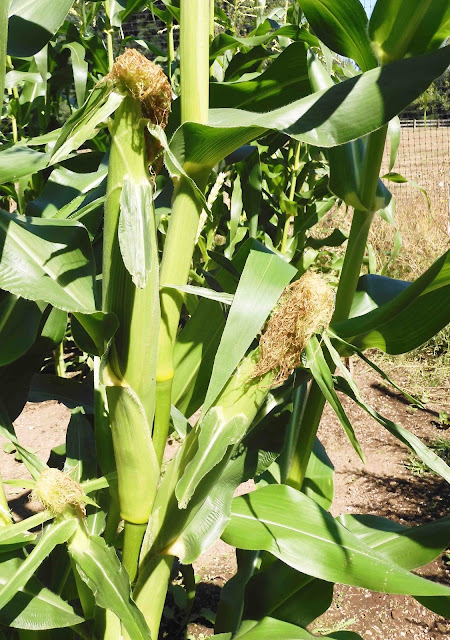 On the other hand, I believe the plums will be ready. They've turned nicely purple. Yesterday, I found a few that were beginning to soften. 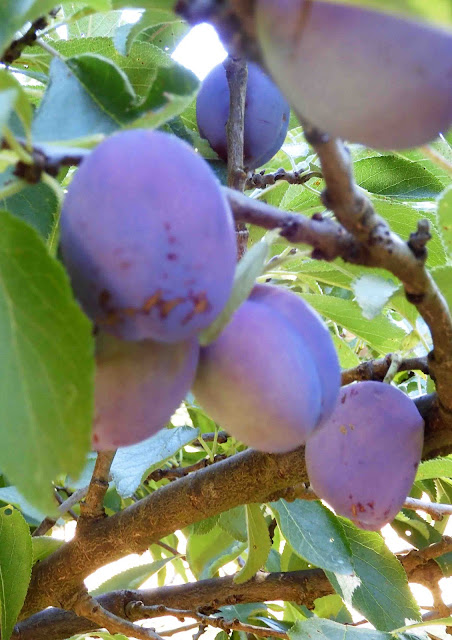 I'm not planning to can any of these, but I'd like to take a big bag along for making a couple of favorite desserts and for eating straight from the bag.
The bee garden continues to bloom in profusion. Yesterday, the last sunflower yet to bloom opened up. It's especially pretty. All of the giants are blooming too. 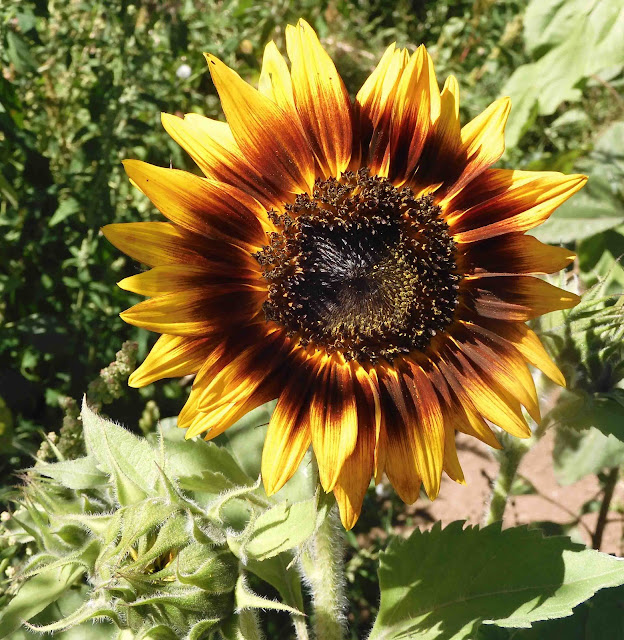 Here are a few of the wildflowers I spotted. 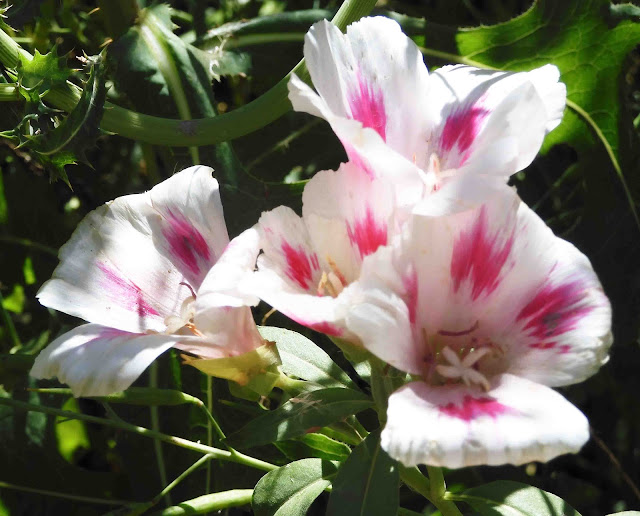 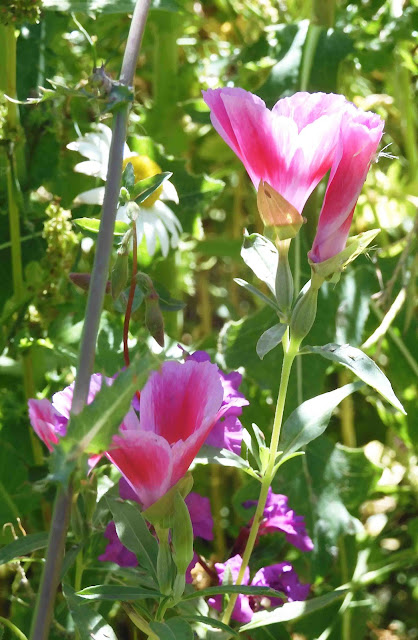 This next one is a new one. It looks like a little hibiscus. 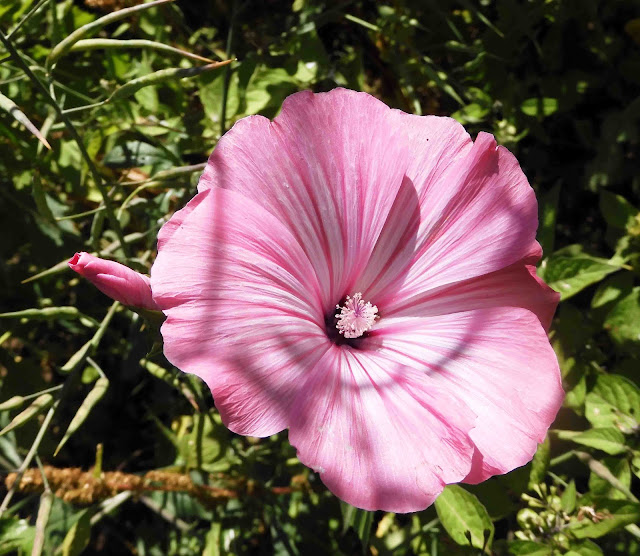 I still had some watering to do. As I walked past the catio, I found Sadie sleeping on the far wall next to the house. 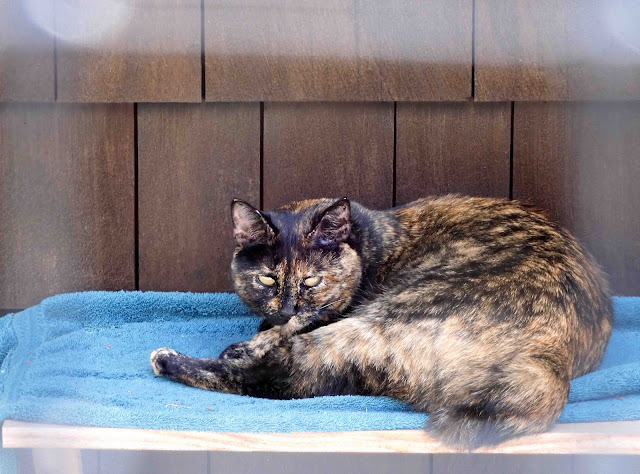 Later, she helped me with my sewing.
Your purroject is about "The Sea?" I don't like water. It's too wet fur my purreferences. 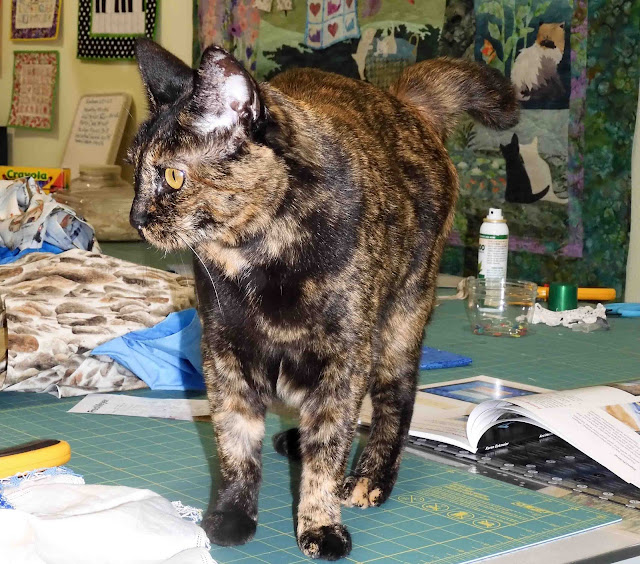 Purrhaps you would like to do something more feline oriented? Pawsibly you could do a sea of cats. 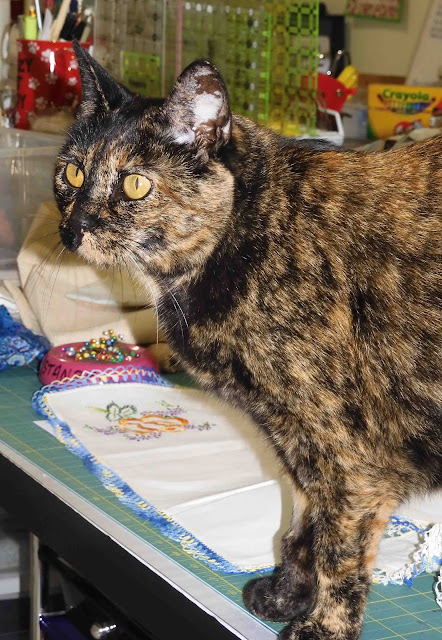 So I was able to finish the top-stitching and I was just getting started on the main element when I had to stop for the day. It was terribly difficult to walk away from it. 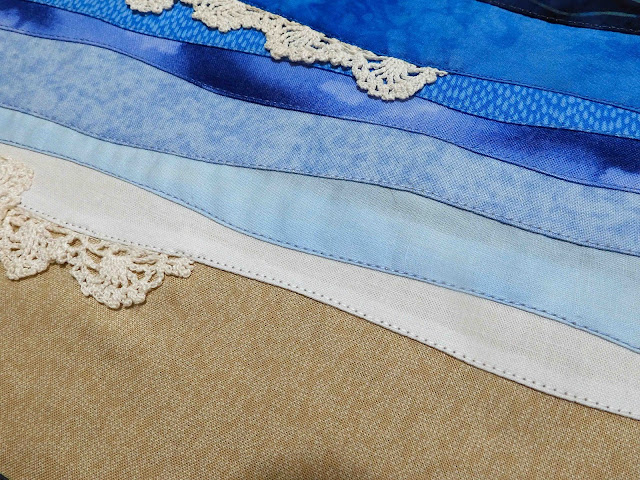 You only get this little peek until the reveal in November. My piece is inspired by a photograph I took while we were visiting the Outer Banks of North Carolina a couple of years ago. While I was working on this, I smacked my hand to my forehead when I realized I could add in another element from the Outer Banks, not pictured in the photo. I know...I'm such a tease. You'll just have to wait and see. And I will too, because it isn't finished yet.
Yesterday I realized I have at least two "modes" of passion for quilting. When I'm making these art quilts, the passion kind of wells from inside, and it's exciting watching them come together. It's very hard to stop once I get going until the rush of inspiration subsides. Traditional quilting is more cerebral with its attention to math and precision, and there's something very gratifying about nesting seams together, particularly from a tactile standpoint. Do you know what I'm talking about? So, I'm hoping I'll have some more time to work on this today. It's all coming together as I hoped it would, and now I just want to keep working on it until it's finished.
Okay, so the green beans will come next. The tomatoes were picked from their vines yesterday, and so they can wait until tomorrow. I expect the tomatoes will take up most of the day Sunday and Monday. If there are any left over, I'll spend a little time with them on Tuesday too. It's a busy life, but canning season is winding down. The end is in sight.
Posted by Barbara at 7:51 AM

Oh yes, I know exactly what you mean about quilting modes. I like to rotate between traditional, modern, and art quilts, each with its own inspiration and energy.

Oh, so do I--when I get inspired i don't want to stop --as if I'm afarid it will go away and i will lose that thread...(hahaha)
or the ideas for fabrics to use that pop into my head as I am sewing...
Hubs calls this view of me "Intense Julie"--and i don't think it's a compliment ;000
Anyway--those tomatoes look gorgeous--yummmmm
Hugs, Julierose

Love the peek of your secret sewing project....cannot wait to see it in November. The Outer Banks are especially dear to us...in fact, we are heading there to our beach house in about three hours from right now! We will be there for about ten days, unless a tropical storm or hurricane pops up. They seem to be greater in number this year...
Looking forward to what you do with the zucchini blossoms...many years ago we went on a tour of Italy and every town/city we visited had fried zucchini blossoms on their appetizer menu...they were sooooo good!
Your bounty of tomatoes looks great! You are going to be busy, but the end product will be so worth the effort!!
I hope your corn is ready for harvesting at least a few ears before you leave on your trip...can’t beat fresh corn!
Sandra B
scb304@juno.com

Of all your wildflower photos, the only one I could identify was the hibiscus one. Can't wait to see what you make with those squash blossoms. The secret project is intriguing and now you've thrown in another bit of suspense. Something to look forward to in November besides the dreaded election.
Pat

Well, I hope you had a good canning day with all those tomatoes! That pink hibiscus is so pretty. Still no start on the challenge quilt here. I decided to clean my quilt room yesterday, which, of course, led to unexpected projects because I just couldn't let those scraps sit. So I used up scraps and got to sew, along with creating more UFOs. I don't know if that's good or bad.

Such a clever use for the lace! Your art quilts are amazing, but that is redundant since all your quilts amaze me. Perhaps you have revealed my problem, I don't have any quilting mode. I plod along when I can force myself to stop surfing the internet, but lack inspiration or those feelings of thrill or satisfaction. I suppose that helps explain why I am such a slacker, and also why you AMAZE me! I need to find some tomatoes. I will be very sad if summer passes me by without at least a couple meals of them, even though canning is unlikely at this point.

Love that sea project, especially the lace. I look forward to seeing it. Tigney Textiles uses material like this, and I really like looking at those end results.

Drat - another comment sent off to the ether....sigh.
As I was saying....wow, that's a lot of tomatoes! We went in quest of beets for the beet/red cabbage relish and managed to find them at the roadside market MUCH cheaper than the grocery store. Now to get my hands on some red cabbage when I grocery shop tomorrow.
As for the flowers - that pink one that looks like a hibiscus is called a 'mallow' - at least it is here.
Your sea project that you and Sadie have underway is MOST intriguing and I can't wait to see!