It's hard to feel very celebratory on this, our American Independence Day. Recently I read a book by David McCullough, entitled 1776, all about the Revolutionary War and the signing of the Declaration of Independence. The challenges and near-miraculous victory of the colonists was very inspiring. Our country is in dire straits right now, and the pandemic is only one item on our list of woes. Still, I continue to feel optimistic that there are better days ahead. And so when I went looking for an image to mark the day, I settled on this one with the superimposed swallow. In the words of Shakespeare, "True hope is swift and flies with swallows' wings." 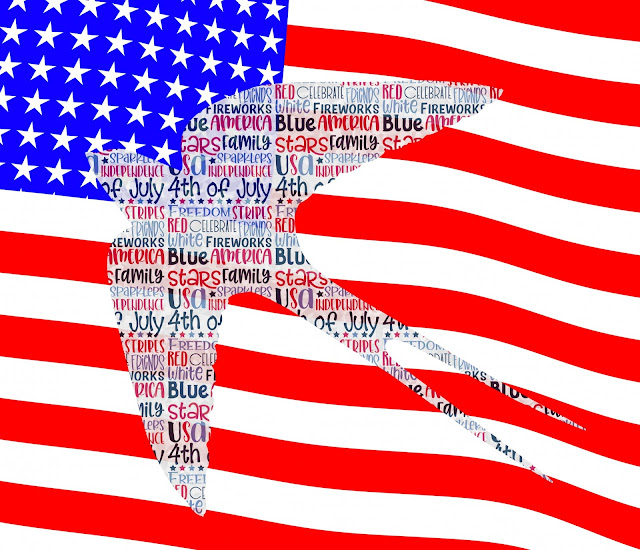 It was a busy day yesterday, and it will be busy again today. I don't have a lot to show for everything I did. On busy days, it's especially important to get in a little slow-stitching time. Yesterday, I started on the last three embroidered blocks for the "I Believe in Snowmen" quilt. It seems a little strange to be stitching snowmen in July, but there you go. 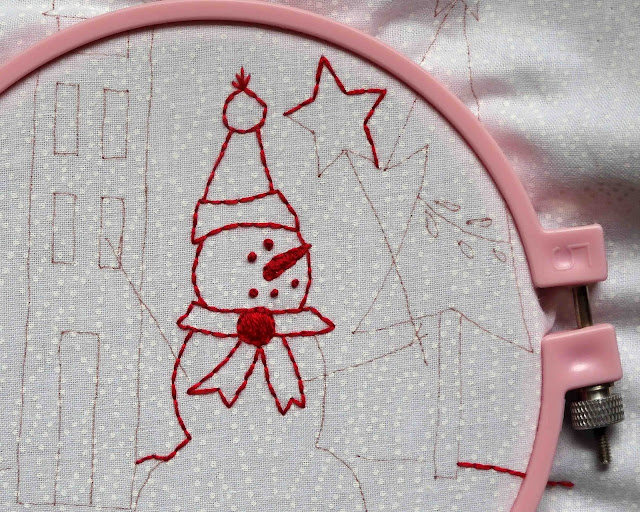 With it being a kitchen day, it seemed like a good time to try a new recipe for Slow Cooker Cream of Mushroom Soup with Sherry. The recipe claims this will serve 12 people, and so I only made half. Besides, it calls for 3 pounds(!) of fresh mushrooms. Fresh mushrooms are kind of expensive, and so I didn't want to shell out that kind of coin for a recipe I hadn't tried. I used a combination of white button mushrooms, creminis, and some assorted mushrooms (shiitakes and oysters). There's just a little bit of prep work, sauteeing some shallots and garlic, and then adding in the sherry. It also includes dried porcinis that have been rehydrated. The broth from rehydrating the porcinis is pretty much all the liquid that goes into the pot. When I was ready to put the lid on the slow cooker and turn it on, the mixture looked like this. 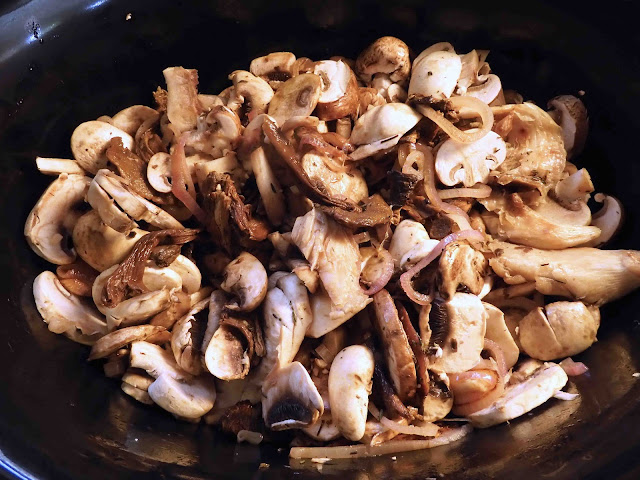 It cooked on high for four hours. I'll show you in a bit how it looked at the end of its cooking time. Meanwhile, I made my mother's version of a Seven Layer Salad (Erik's favorite), and a Key Lime Tart. It isn't much of a looker, but it is delicious. 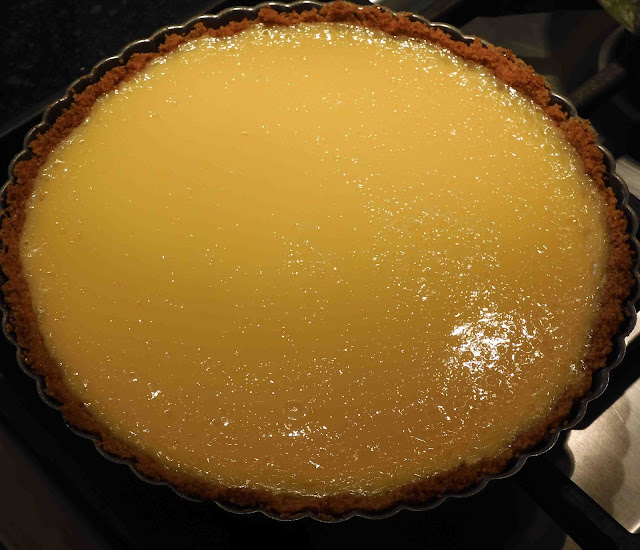 You might remember when we did the Key Lime Smackdown, comparing tarts, one made with regular limes and one made with key limes. You can find the baking of the two tarts for the smackdown and the discussion of the differences in limes right here. To be clear and to give a spoiler alert, the key limes won the contest, but I'm still using regular limes for this because they're easier.
After all that cooking, I decided to take a walk around the garden. Ordinarily, this would have Smitty yowling to come along, but he was looking pretty chill on his catio. 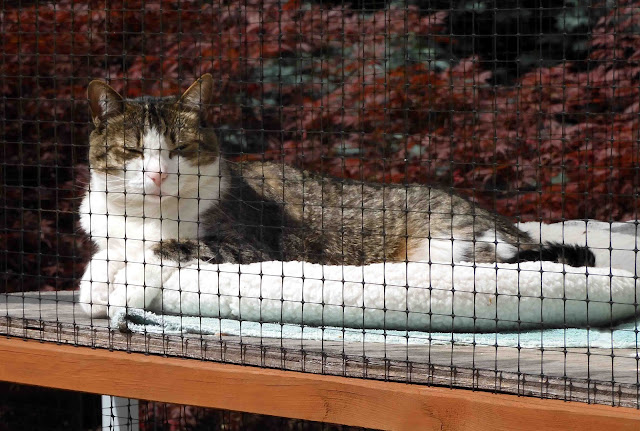 This is still the only echinacea flower that has opened. There should be more soon enough. 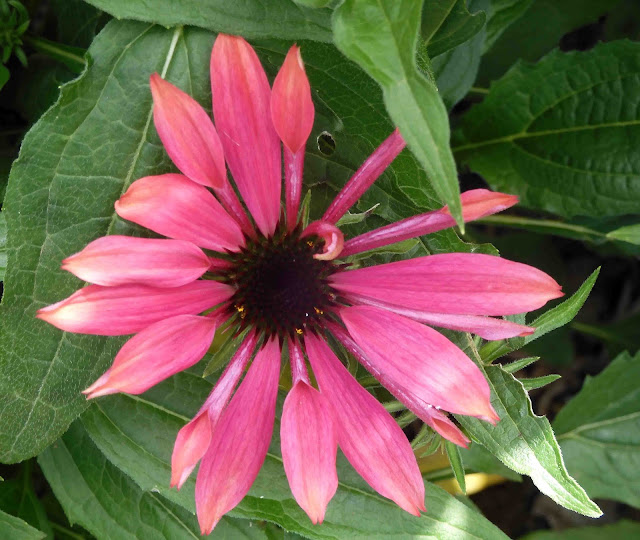 The hydrangeas are really what's happening right now. These two in the back are blooming to beat the band. 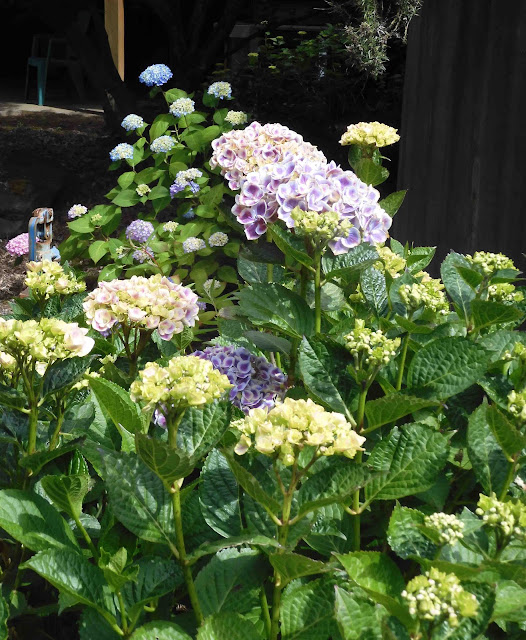 The pink one hadn't fully opened last time I walked around. Here's how it looked yesterday. 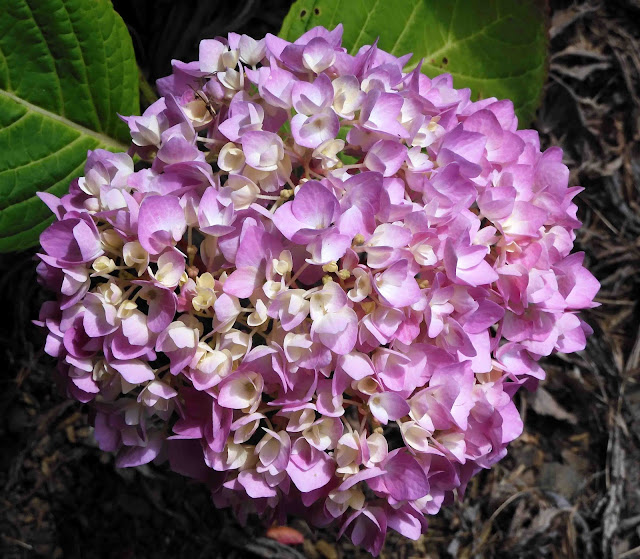 Around the front of the house, the burgundy one is nearly opened. I'm kind of glad because Erik and Mae will be here today, and this was a gift from them. I'm not sure they've ever seen it blooming except in pictures I've texted them. (Sorry for the blur.) 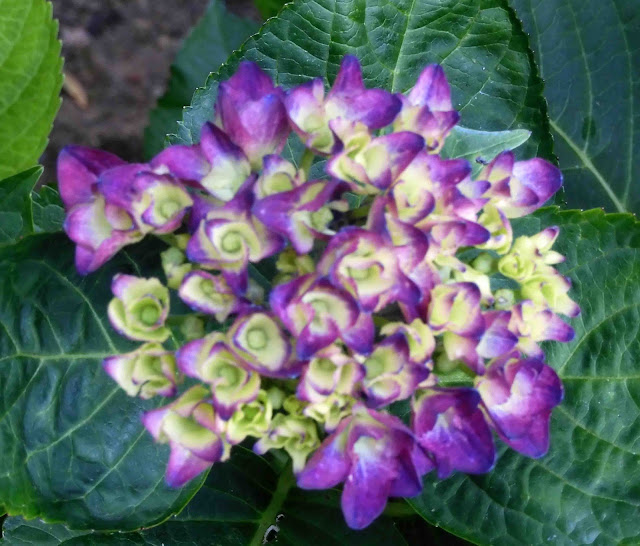 Also, the deep blue is close to opening. 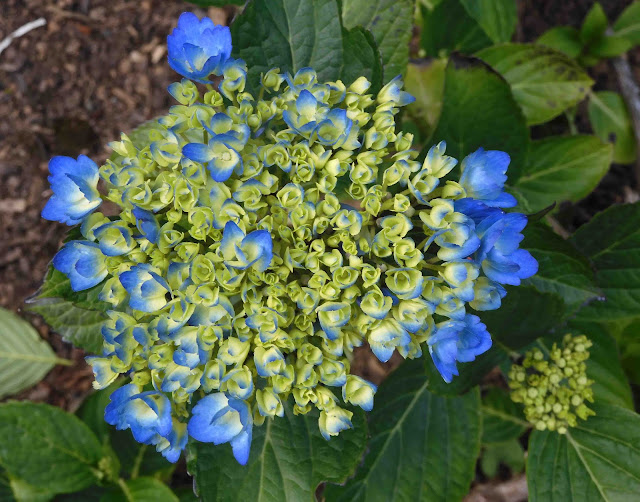 In the greenhouse, I spied the first tomato. It was the only one I saw, but there should be more. They might be too small to spot easily at this point. 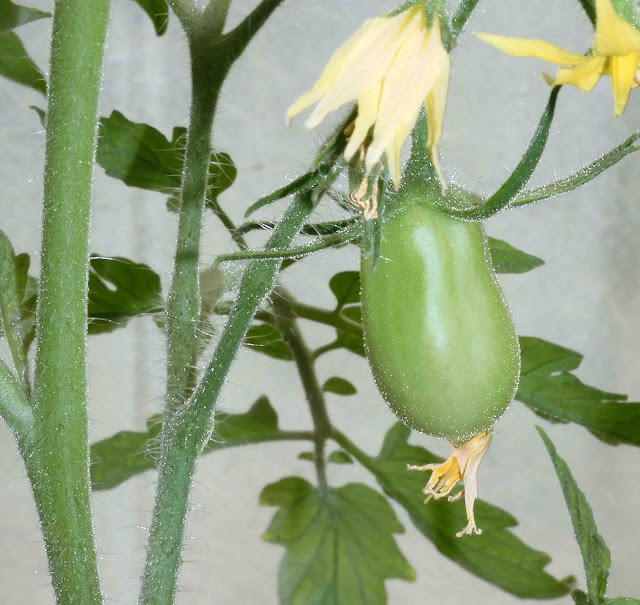 Interestingly, the little make-up brush I use to help pollinate them has disappeared. Of course, I blame the squirrels, but honestly, I can't imagine why a squirrel would steal the make-up brush. I've looked all around and can't find it anywhere.
The new rouge cardinal clematis is blooming now. In a small way, it makes up for the blue one we managed to kill off. And, yes, I'm afraid the blue one is toast. It looks worse every time I see it. But, hey...this is some consolation. There are three flowers in the process of opening, and lots more buds. 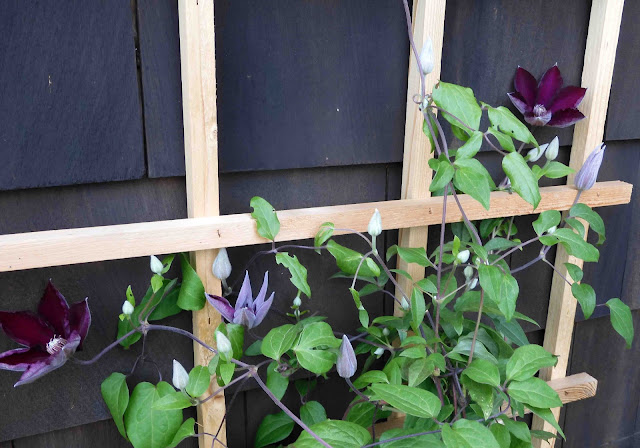 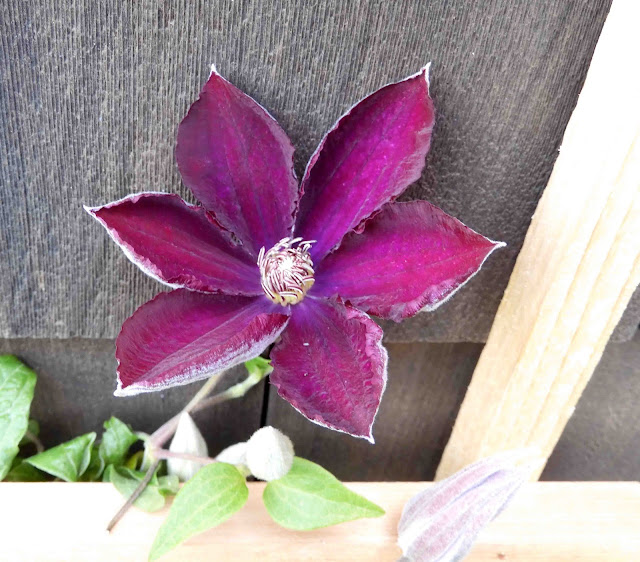 Okay, but what's going on with our cream of mushroom soup. Let's take a look: 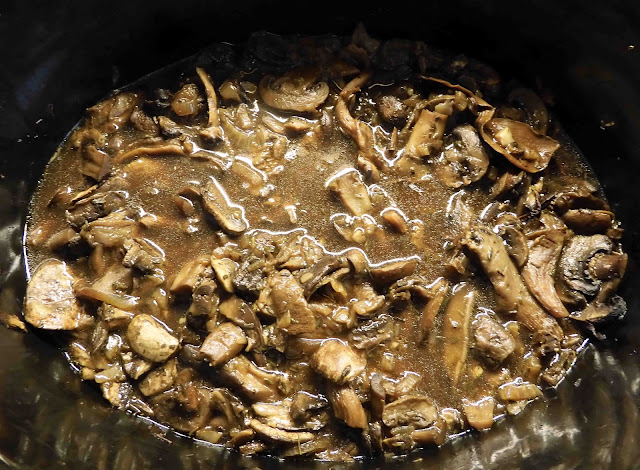 After four hours, the mushrooms have cooked down and released their liquid. From here, I scooped out a cup's worth and pureed it in my blender. Then I added it back into the soup with a quarter cup of heavy cream. When I served it up, it looked like this: 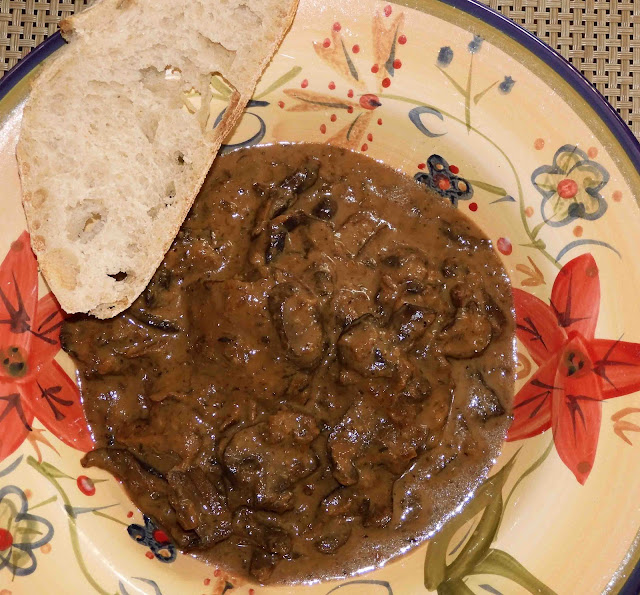 It was meaty and good, but it needs something. We tried putting a little splash of marsala into our bowls, and that helped some. I think it needs something to brighten it up a little...possibly a little squeeze of lemon juice. Possibly a sprinkle of fresh parsley would help and add some color...or maybe some lemon zest.
So, I'm not ready to say this is a great recipe, but it does have potential. Also, what I made here only served the two of us with a tiny bit left over. With the original recipe supposedly serving 12, half the recipe should serve 6, right? (I'm very good at math.) Anyway...I'm going to try it again at some point, but I'd like to add in a quarter cup of marsala at the beginning, and then see how we like it. Maybe serving it up with a wedge of lemon to brighten the flavor would help too.
The after-dinner hour is Smitty's favorite time of the day. He looks pretty comfy on his catio. He sometimes naps there for hours. 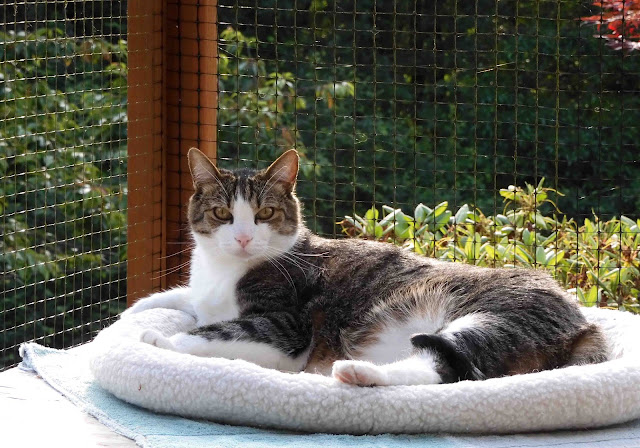 For our drastically scaled down Fourth of July celebration, Erik and Mae will be here later. I'll be doing a little more cooking today...making another salad and a couple of easy appetizers. Mike also requested a skillet of fried potatoes the way I used to make them for tent camping trips. I'll tell you more about that in tomorrow's post. Mike is going to smoke a couple of butterflied chickens and we'll have ourselves a feast. No fireworks though. Kitties do not like fireworks.
I'm hoping to have a little time for sewing today, but not counting on it. Luna awaits, and I have not made any more progress on her from my last post. Also, I volunteered to make some themed masks for friends, and now I have an order for 9 masks. They go together pretty quickly. I've been choosing fabrics with certain people in mind, and that part has been kind of fun.
So there's a full day ahead. Time to get moving.
Posted by Barbara at 7:50 AM

the clematis' color is gorgeous...so rich...looks like you have a busy day ahead.
We are having a quiet 4th; frothed coffee on the deck early on before the heat arose; then I bound Franken Christmas--so DONE on my binding mission for now...shrimp and rice for dinner for me; leftover meatloat, taters and gravy for Thom...easy peasy...
I hope you have a wonderful dinner all of together...
~ ~ ~ waving my little flag in hopes of change~ ~ ~ Julierose

The clematis is such a rich colour, really pretty. Happy 4th July for yesterday. I hope you had an amazing family meet up and dinner. Smitty does love his comfy spot to snooze and watch the world.

We've had a population explosion of squirrels this year. When I mop, I always put the sponge mop out on the porch to dry. Sometimes I forget to bring it in immediately when it's dry. Those little buggers chewed the sponge off! I'm positive they stole your pollination brush.

I haven't done much sewing this weekend either, other than my little mini plus block yesterday. I need to get one done for today, so maybe I'll sneak that in. I've made masks this past week too. Might as well have fun with the fabrics while making the masks, in my opinion.

I was delighted to see your snowman since we're headed for 90 degrees today and for the next 6 days, very unusual for western NY. So dreaming of snowmen might make me feel cooler. Not a fan of mushrooms, but the key lime pie looks refreshing.
Pat

The cream of mushroom soup looks delicious, thanks for sharing the link. Love your snowman stitchery! Beautiful flowers. My hydrangeas are looking a little crispy now, after having 2 weeks of 100+ weather. Yours are looking gorgeous!

I just love clematis and finally have one in my yard since we moved four years ago. So happy that it actually had a blossom this year. Yes we must hang on to hope. I find it better not to listen to it all. My hubby and I have been watching farmers on you tube. We both grew up on a farm so it brings us back to our roots where people work hard everyday and are happy to do it. No time for politically fighting and respectful of their neighbors and land. Wish we had a reset button! I hold on to that most of us are sensible any way I hope we are!

Hi,
Love your flowers...so pretty. Your snowman
is beautiful...I'm thinking of doing a snowman quilt...
but haven't decided yet...have a great day!

That mushroom soup with lemon zest would be lovely, I'm sure! Will have to try it.

Resident Chef would quite happily dig into that mushroom soup...me, not so much. I like mushrooms and I like mushroom soup, but I'm not hugely excited about it. Now put fried onions and mushrooms on a burger and I'm there!! Smitty looks quite comfie and doesn't look as though he's missing his garden strolls too much.

The mushroom soup sounds interesting. Love your beautiful flowers. It's so hot here, even the wild flowers are struggling. Hope you had a wonderful 4th of July celebration, even if it was a quiet one.

Your mushroom soup looks so good, the flowers are amazing and love the snowman embroidery.