Finally Finished on all Fronts

It was a day for finishing things up. As everyone knows though, nothing is ever really finished. One thing finishes, and another opportunity presents itself. I spent the day on just two things. First, I finished with the last of the cherries. Since beginning, I've picked, pitted, and processed 30 pounds of cherries. I wasn't counting on my neighbor coming through with the pie cherries, and so I ended up processing 10 more pounds than I thought I would in the beginning. When she offered up her cherries, my first thought was to say no. Ours were ready, and I already had enough to do. But then...mmmmm, those tart cherries in pie filling. That was all it took for me to buckle.
Yesterday's cooking adventure was this Sweet Cherry Chutney. My yield was 9 half-pints. Yum. 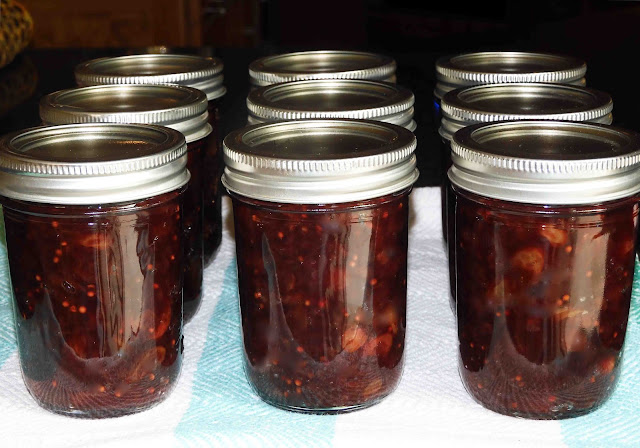 It took about an hour and a half to cook down, and then another hour to process it in two batches. While I was stirring and waiting, I cut out all the applique to finish off "And On that Farm." 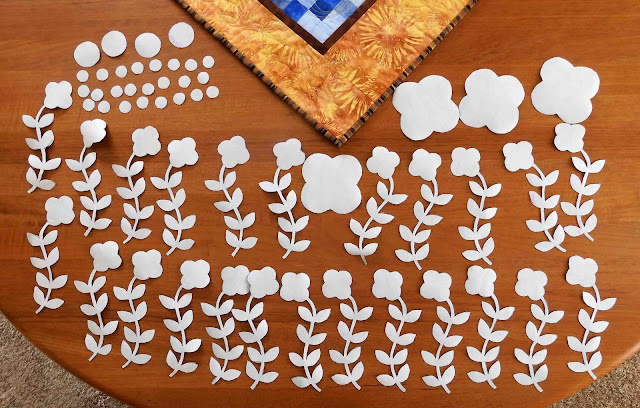 And wouldn't you know it (because I did), even with all of that, there wasn't enough to make it all the way around the quilt. I was expecting this, and I'd already made a decision to stop when all the pieces were used. As if I needed another reason to hate McKenna Ryan patterns. Please organize an intervention if I say I'm going to start another one. There was enough going on at the bottom of the quilt, I thought the extra "garland" would be gilding the lily. So it looked like this: 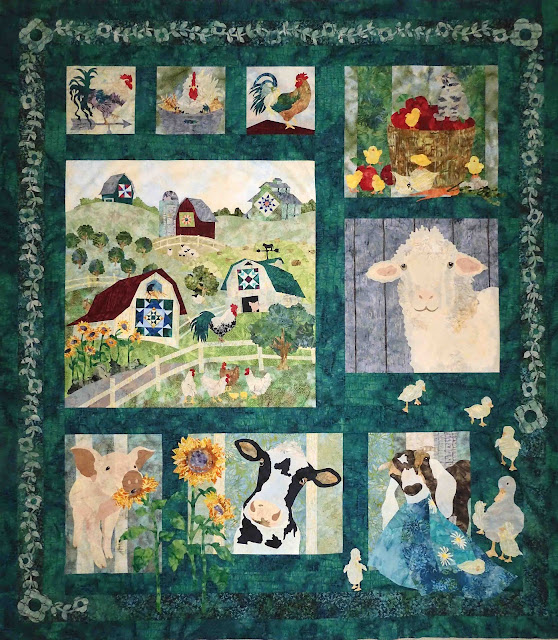 Only, I stared at that picture for several minutes last night, and I decided the extra piece turning the corner in the lower left looked funny. This morning, I pulled it off, and called it done. Here's how it looks now. 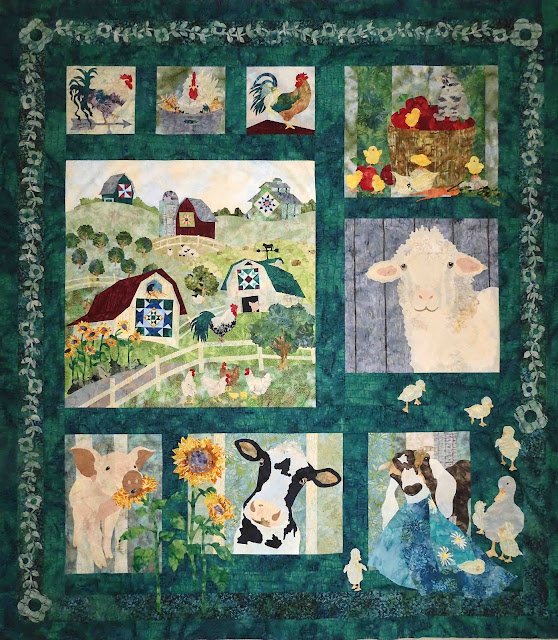 I like that better. Of course, it isn't finished yet. It still needs quilting and binding. Today I'll finish up making the back for it, which will mean just one long seam. The binding strips are cut. It will be several months before I get to it though.
While I was working on finishing the applique, Smitty came in looking for his dinner...which was late, as usual. 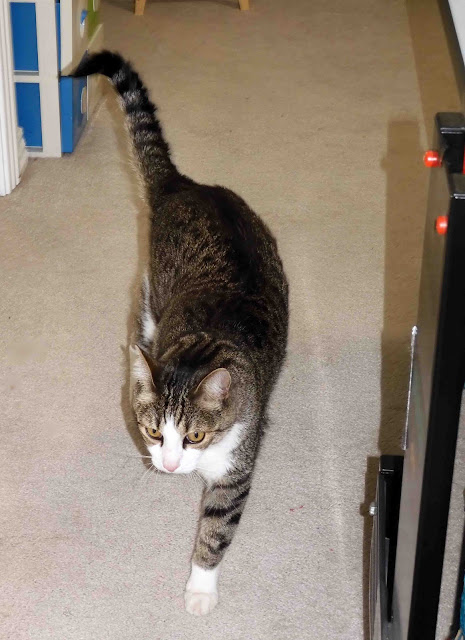 Hel-llooooo...it's time for my dinner. 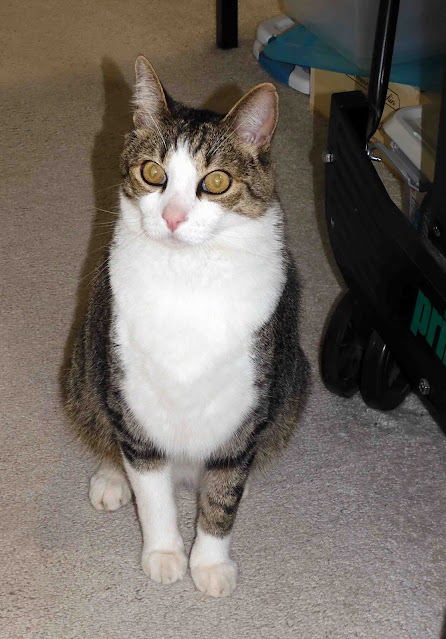 He didn't believe me when I told him I was almost finished, and so he manned the seam ripper while I finished up, sighing enthusiastically at the boredom of it. 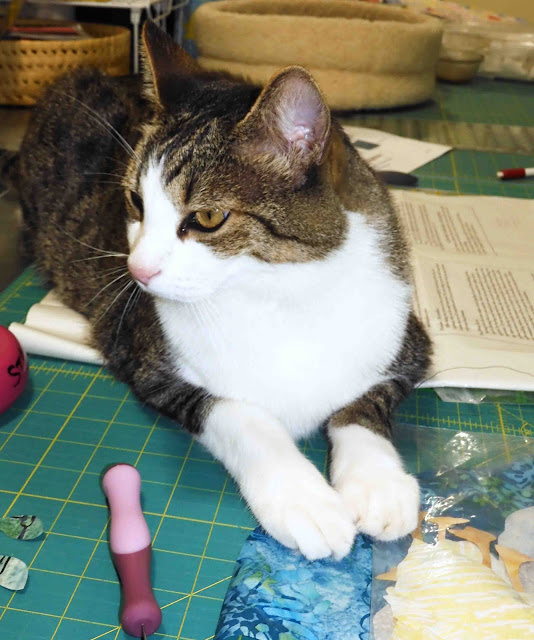 He loves his afternoon naps on the catio. He had his eyes closed just before I took this picture, and he was the picture of contentment. 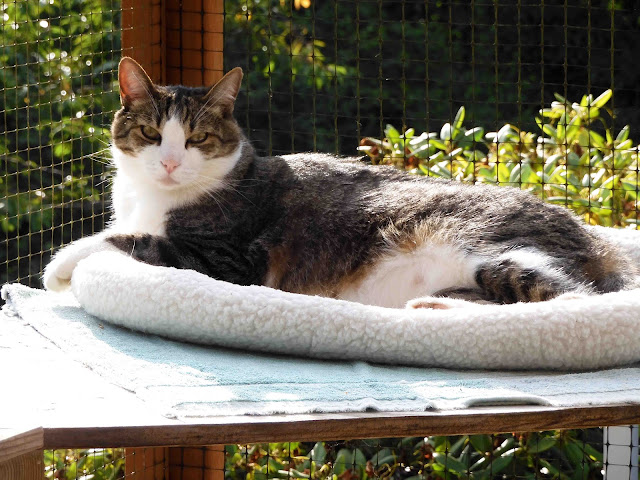 So today, I absolutely must do some housework. When I'm finishing a quilt, I'm obsessed with it, and so everything else has fallen by the wayside. Also, I need to hoe the garden and water the flower pots. Later this afternoon, Erik and Mae are treating us to a wine-tasting outdoor event at a local winery where they are members. That will be later this afternoon, and so we'll pick up some Thai takeout food on the way home. Should be a nice way to finish the day. I'm thinking raspberry-infused vodka might be involved. For sure they'll be leaving with lots of freshly canned jars of cherry goo. Everyone has to do their part.
I'm nearly finished with my current embroidery project. Probably I'll have a picture for you tomorrow, and that means I'll have to find time today to trace out the next block for the Appalachian Memories quilt. I forget if there are one or two more left, but it's getting close to being finished...the blocks, anyway. Like I said, when you finish something, a new opportunity presents itself. But one thing is finished this morning already...this blog post. It's finished. Have a nice day, y'all. Stay home and stay healthy. Do a lot of sewing, if you must.
Posted by Barbara at 8:16 AM

I so admire your determination for finishing this quilt. I don't do much applique and certainly wouldn't attempt anything that tedious. It might be cute to add that little piece you removed from the border to the end of the other side border, like a little vine trailing down the side. I love your supurrvisor!

Your Mck Ryan quilt is really coming together so well--lots of fussy sewing there...but so pretty...
Enjoy your meal out...
Hugs from hot hot hot CT Julierose

I guess we need to change the phrase to "Life is just a pantry full of cherries" What a variety. Now, watch, next year there will be hardly any. And three cheers to sticking with the Mckenna Ryan. I would have quit long ago (well, actually, I never would have started). Wine tasting sounds fun.
Pat

Well, the McKenna Ryan quilt finished well. It's very pretty and cheerful. I hope the quilting goes well. I do hope the vodka made an appearance; I'd say you earned it.

Your quilt is wonderful! I can't get over all the little tiny details throughout. And yes, I will try to remember that an intervention is in order should you dabble in the thought of making another. One would be enough for me too! Well, even one would be more than I would ever tackle.

You've been a canning machine the last few weeks. The Farm Quilt looks really nice. It has to feel good to finally finish it.