Thank you to all who stopped by to wish me a happy birthday yesterday. I was a lovely day...very low key, and yet, it all seemed special. First of all, I'm thrilled to say the poppy from Ireland opened all the way yesterday. Oh my gosh...take a look... 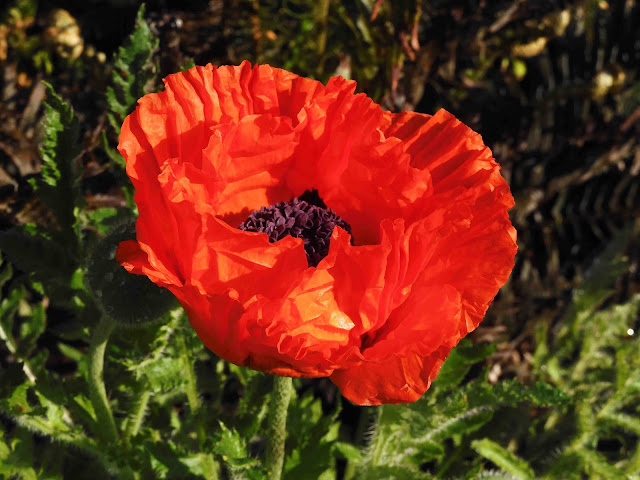 They are so big and beautiful they don't even look real. The petals appear to be made of crepe paper, and the interior reminds me of the inside seeds of a bell pepper. It's a tease of a plant, making one wait so long for the bud to open, but wow. Quite a stunner when it finally makes its appearance. 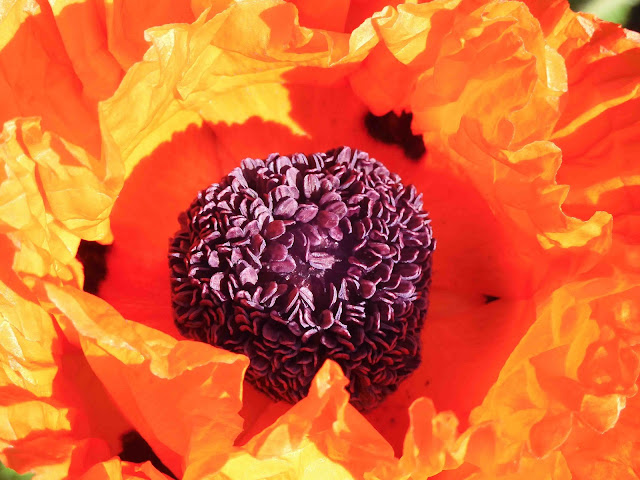 Okay, so I mentioned we were going out for a drive. I didn't take many pictures. We had in mind to see if we could visit Washington Park and the Portland Rose Gardens. It was a nice day and the view is pretty from there. We arrived to find the gates closed and locked...not really surprising. So we ended up just driving around the old neighborhoods near Council Crest. We hadn't been there for years, and so it was kind of fun to revisit the storied homes in the area. I took a couple of pictures on our way. This first one isn't a very good picture because of the reflections on the glass. I was trying to show you the field of red clover in bloom. 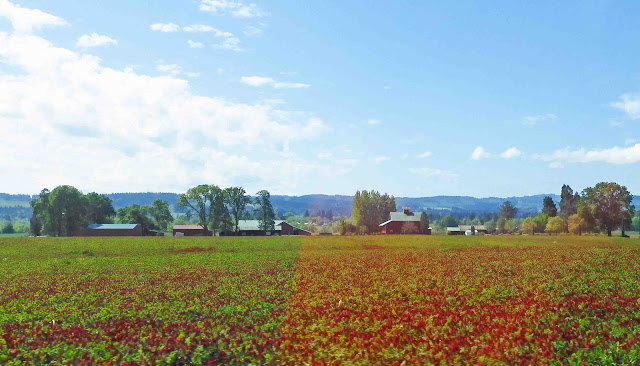 Every few years, the farmers plant their fields in clover to replace nitrogen in the soil. The clover is sold for its seed, and so it's a money crop. To the observer, it's just plain beautiful. Also, we were stopped on a narrow road to allow an oncoming car to pass. This metal sculpture caught my eye. Do you think this is intended to be a quilt block? 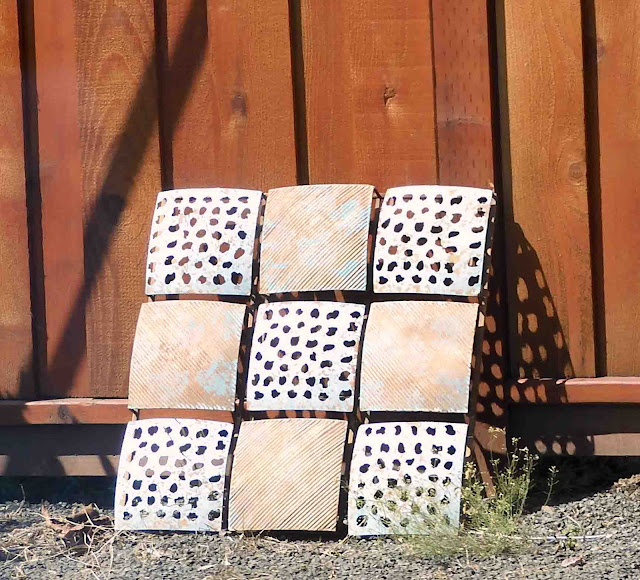 We had lunch at a drive-through Carl's, Jr. You folks back east, probably know this place as Hardee's. We happen to think they have the best fast food burger. We parked and ate in the car. To our left was an embankment of English ivy approximately a city block long. It was covered in some purple berries. Here's a picture I found online: 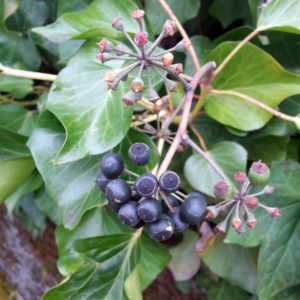 This is what the article from the Tualatin River Watershed Council (a local organization)had to say about it:

Flower and berries will only appear on mature ivy. The flowers are small, greenish-white, and grow in umbrella-shaped clusters. Berries are purplish-black and many birds, especially starlings and robins, will eat them and disperse the seeds widely from the parent plants.


And that explains why English ivy is considered a scourge in some areas.  Scourge aside, the birds were all over it, and as we sat there, we saw a bird completely new to us. This is the Western Tanager: 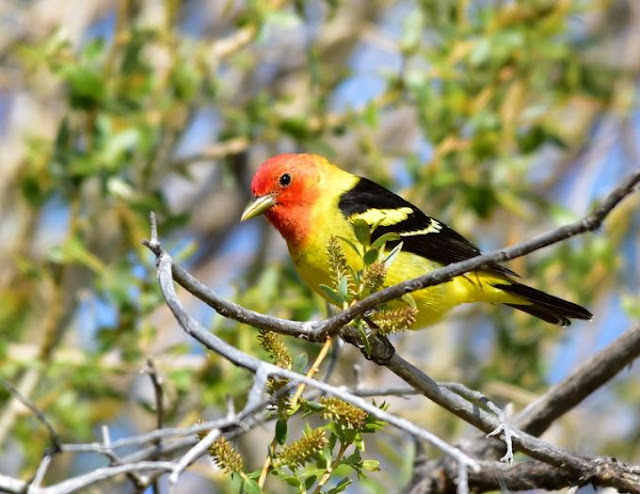 Apparently they are common in our area at this time of the year, although they usually confine themselves to the forests. It was the berries on the English ivy that attracted them...and lucky us getting to see them.

When we got home, I found a package I've been awaiting for a full month finally arrived. I wasn't in any hurry for it, but it came from Australia. With most flights grounded for the time-being, it was put on a slow boat and sailed across the Pacific to arrive in my mailbox yesterday. These are some little buttons from Lynette Anderson. 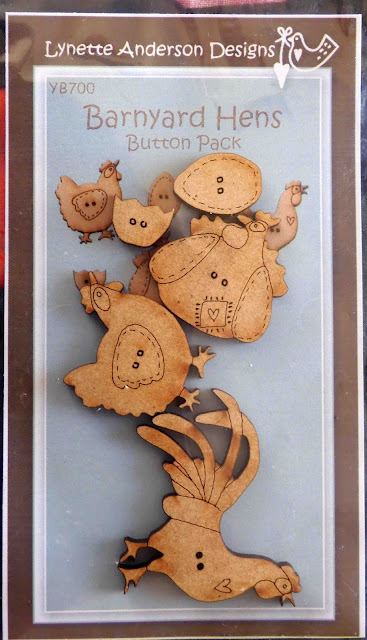 I visited her website recently, and found this free pattern: 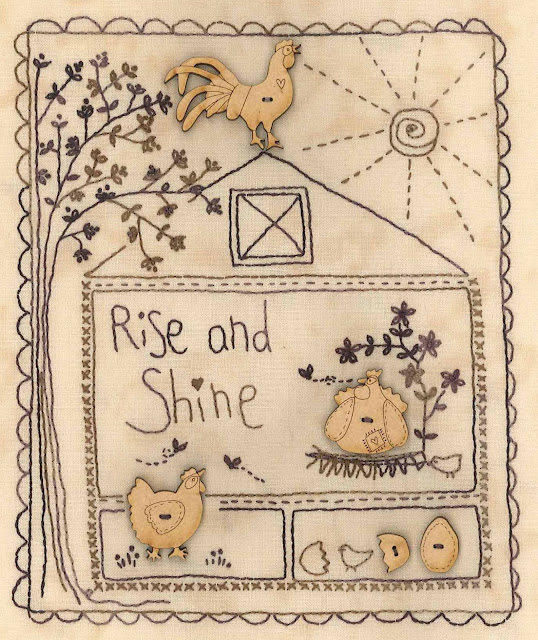 And maybe you could just draw in the little chickens and eggs, but I bought the buttons. How could I resist?

Speaking of free patterns from Lynette Anderson, here's another one I made up. This was the fourth of four of my pay-it-forward gifts. My friend has it now, so I can show you the whole thing. It's a little mug mat. 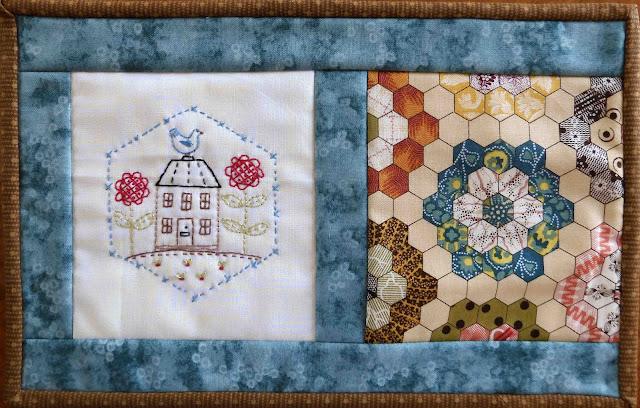 The stitchery is from Lynette Anderson. The fabric on the right is some I picked up when I visited Temecula Quilt Company a few years ago. This one is called "Home Sweet Home."

The kitties were happy to have us home. We let them outside, and they sat at the door waiting for us to follow. So funny, these two. 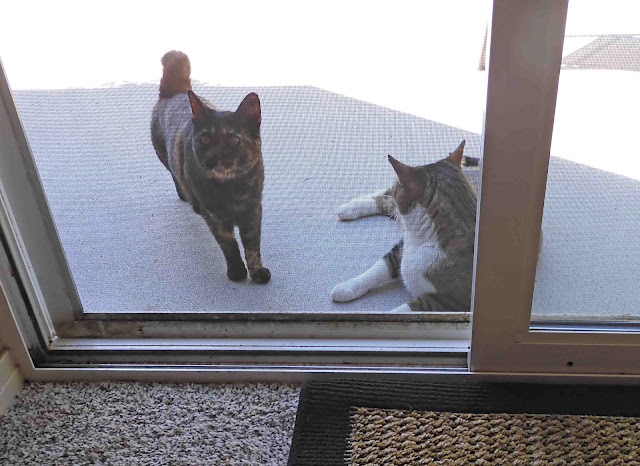 Also, I did some shopping in Ye Olde Fabric Stash quilt shop. I picked out this one for the back of the poppy mosaic. This fabric has been in my stash for years. It's beautiful, but a large scale print, and I've had trouble figuring out a way to use it. It'll be great as a quilt back. 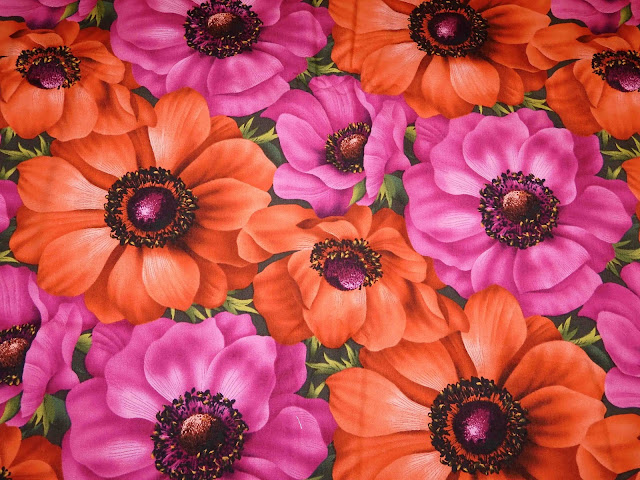 The poppy mosaic still needs a square-in-a-square border added. The outer square will be done in blacks. I wanted to use a tone-on-tone, rather than a solid black. The squares are alternating with lighter and darker values, and so I chose these two. 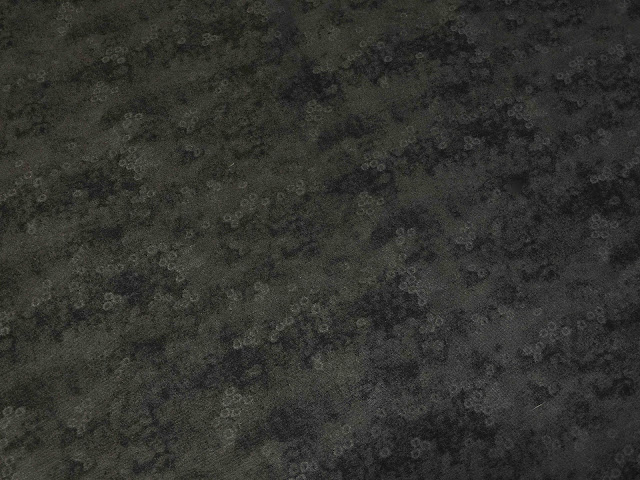 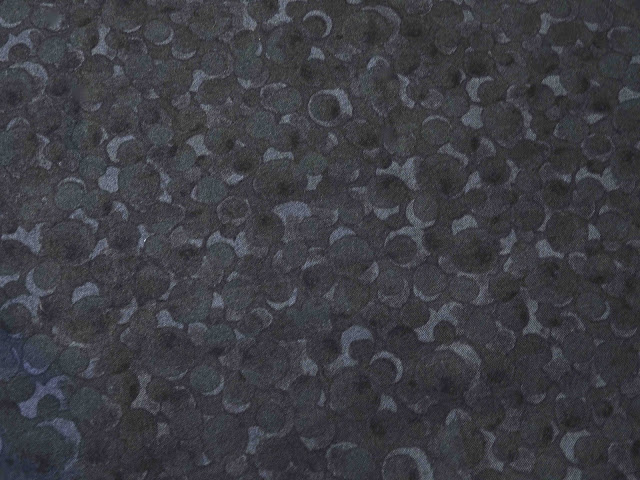 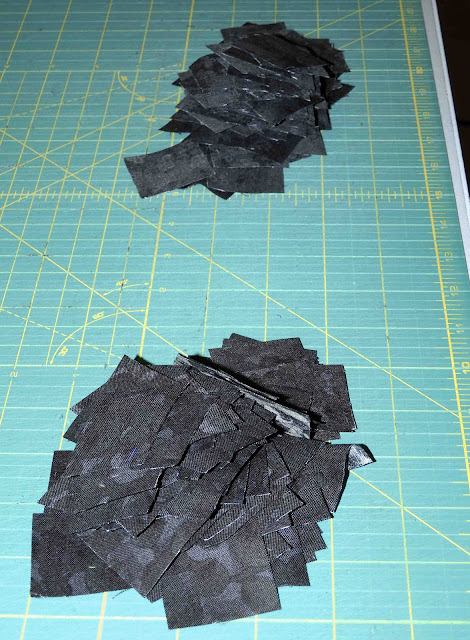 Also, I needed two values of red for the inner square. I chose these two. The one on the right is more red than orange, although it photographs as more orange than red. 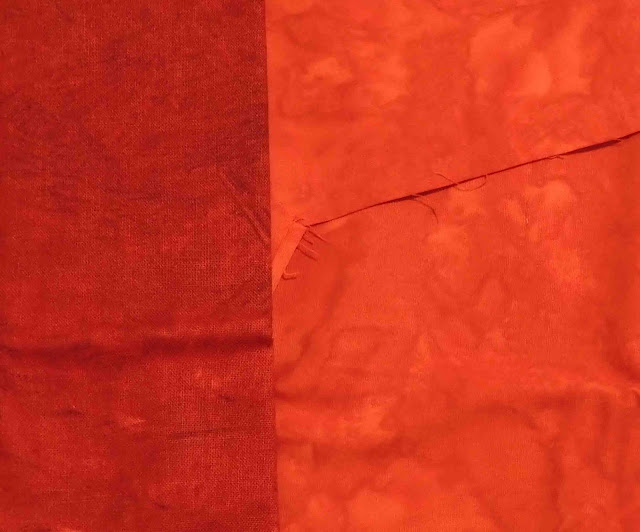 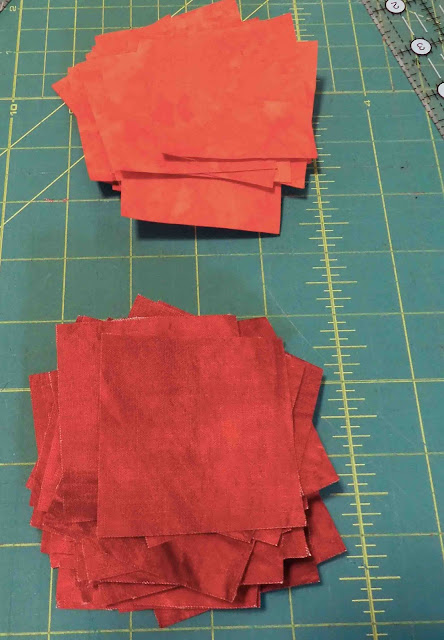 Now they're bagged up and ready for me to start sewing together today. I'll be able to chain piece them, and so they shouldn't take too long. 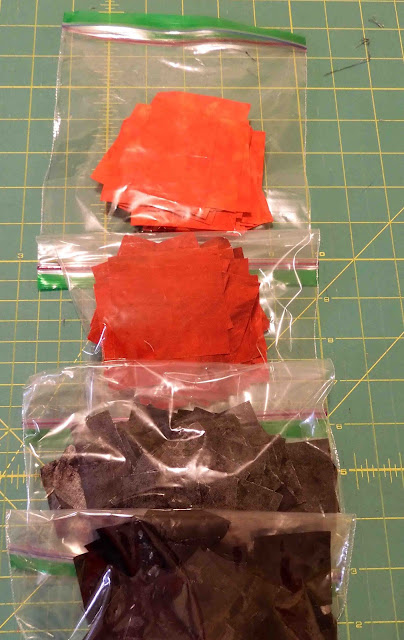 When those are added, I'll add a 1-inch green border all around, and the top will be finished. 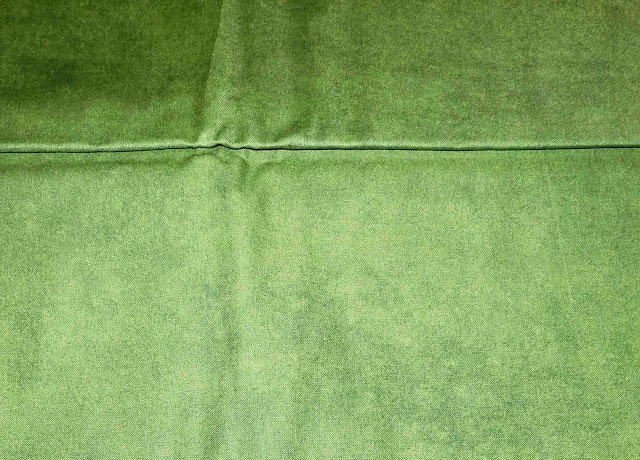 After that, we tried to order Mexican take-out, but couldn't get through to any of the local Mexican restaurants. They apparently were slammed for Cinco de Mayo. We ended up getting Thai food. Matthew dubbed it "Cinco de Thai-O." Also, Mike made some of his fabulous margaritas, and we finished of the day in style.

Okay, so I've had my Queen for a  Day moment. Back to business. We have to make a grocery shopping trip, and we need more bird seed. I have a small housekeeping chore, but then I'm hoping to get back to the poppy quilt. I'd like to finish it today, if I can. If not, it'll be tomorrow.
Posted by Barbara at 7:31 AM

That is such a glorious poppy! We may or may not see any this year, it's been snowing most of the morning and there is more in the forecast each day through next Monday. Sounds like you had a lovely birthday despite having to settle for Cinco de Thai-O! That western tanager is a beauty, not sure if we ever saw any while we lived there. Yesterday was a good day for spotting colorful critters though, Dennis saw a red fox trotting across the back yard early in the morning, than later a baltimore oriole visited one of the feeders - wonderful bright orange coloration. Your tone on tone fabrics would be my choice any day over plain solids. They just seem to liven up any quilt. Maybe you could do Mexican today for a 'day after celebration' - birthdays should never be just one and done, don't you think?

Happy belated birthday, sorry I missed it yesterday. It sounds like you had a wonderful day.

Gorgeous poppy--I used to have some at my former home--they do look like crepe paper--unreal and almost fluorescent...
that poppy fabric is a perfect fit for the backing...
Nice that you got out...we are not feeling "safe enough" as yet
to do take out here....I am thankful that hubby cooks too...as it is
getting old (I miss my lobster rolls at our favorite restaurant--which isn't open!!) I have a grocery run for tomorrow.
Stay safe ~ ~~ Waving under gray skies again Julierose

The poppy is spectacular! Glad it bloomed for your birthday.

Happy Belated Birthday!!! Your poppy mosaic quilt is gorgeous, and so it the poppy outside! What timing you had to be finishing your poppy quilt, while your 'real' poppy is blooming! And the universe comes together to wish you a happy birthday! 🎁 🎂

I admire the fact that you can use your material to make quilts. When I was married all I did was buy fabric for making quilts. Now that I am single I buy kits to not bother with having to buy fabric for the quilts I want. So slowly I am donating fabric to quilt organizations that make quilts for causes. I look at it as my ex-husbands contribution to the quilting world. I am sure he would be touched, and maybe bring a tear to his eye! Hah!

Clever Matthew! We didn't cinco too much, just had homemade enchilada casserole for dinner. I love the chicken stitchery and the buttons! The little mug mat is lovely too. Of course, what fun to see that bird! The poppy is swoon-worthy, in my opinion.

The poppy is amazing. I must try again to get some to grow. Your friend loves the little stitchery, she is obsessed with house motifs during this quarantine.

Your poppy is amazing. I had one come up in my kitchen garden once. It was a ho-hum plant and I just watered it. I was so surprised when it sent up a stalk and this gorgeous poppy opened. Yours look just like it. Love, love your poppy quilt. I have enjoyed reading your progress reports as you made it. Thanks for sharing.

Wowser ! I wouldn't have been able to resist that beautiful poppy fabric either. It makes me smile just looking at the picture. I would probably still have it sitting in the stash also.
I love seeing the yard. Keep up the great pics- those of us who have lost the ability to garden sure love them. Thank you for your blog.

Happy belated birthday! Glad you were able to get out and about. Hard to plan to go anywhere. The real poppy and the quilt poppies are both beautiful. Hope you get to enjoy several blooms while you finish up the borders on the quilt version. That backing fabric is perfect!