While I managed to get through the grocery store without killing myself or anyone else, it was a rather taxing outing. For one thing, I gave Mike the morning off. Really, I wanted him to spend his time working on getting the sprinklers set up in the garden. Besides, my list was fairly short, which was the only saving grace for my trip. The store was way busier on a Friday morning than it usually is when I go on a Tuesday, Wednesday, or Thursday. Still, I made it through and I was home around 10:30 a.m. The bird feeders still needed filling, and I needed to sprinkle a few things down with the hose, but after that it was NBS (Nothing But Sewing).
When I arrived home, I found Miss Sadie soaking up the morning sunshine. Nothing like a good sunbath to start a cat's day off right. 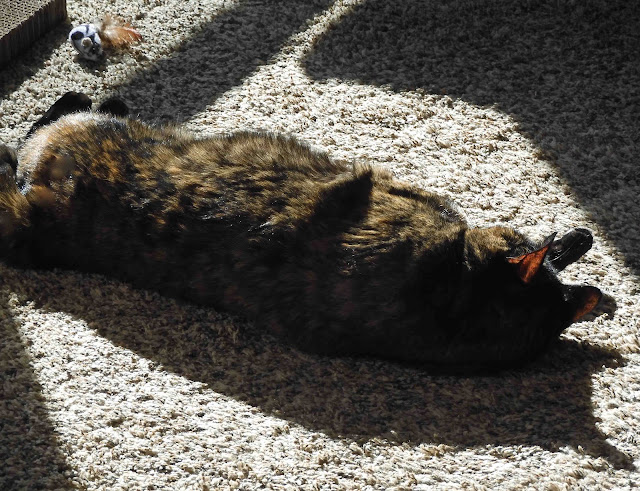 While she was relaxing in the sunshine, I worked some more on the latest Snowflake. This one has taken a long time, but I'm down to the last bit of silver stitching around the outside edge. I'm hoping to finish it this morning, and then there is still beading to do. 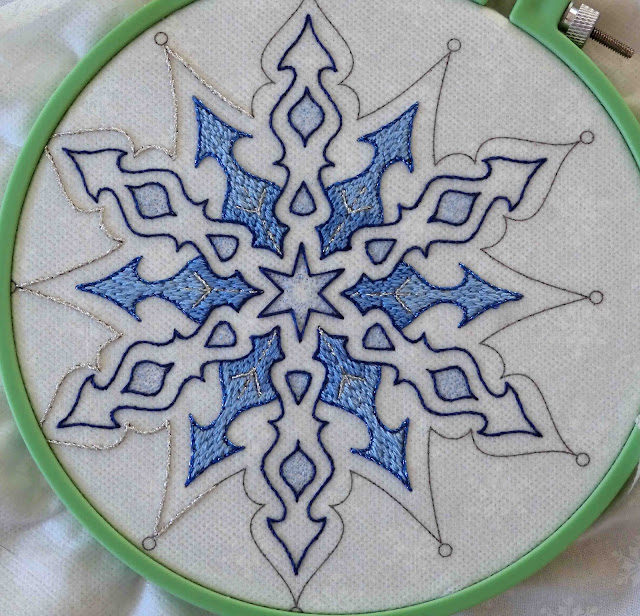 Since Mike was outside banging around with the sprinklers, we let the kitties out for a while around noon. When they came in, they were pooped pups. Smitty was passed out on his kitty pole. 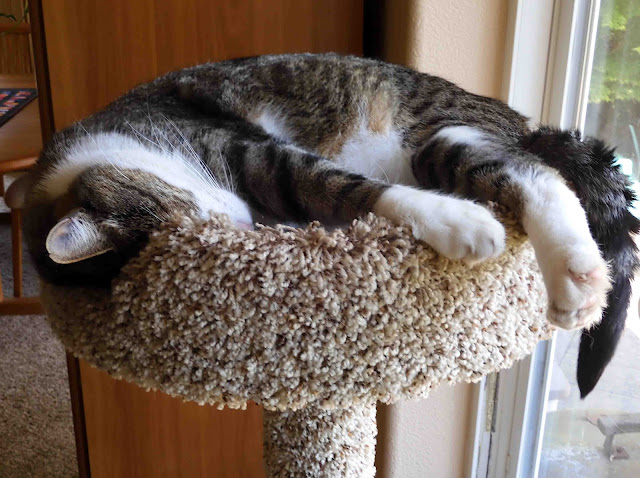 Sadie took up her former sunbath position, obviously disappointed that someone turned off the sun. 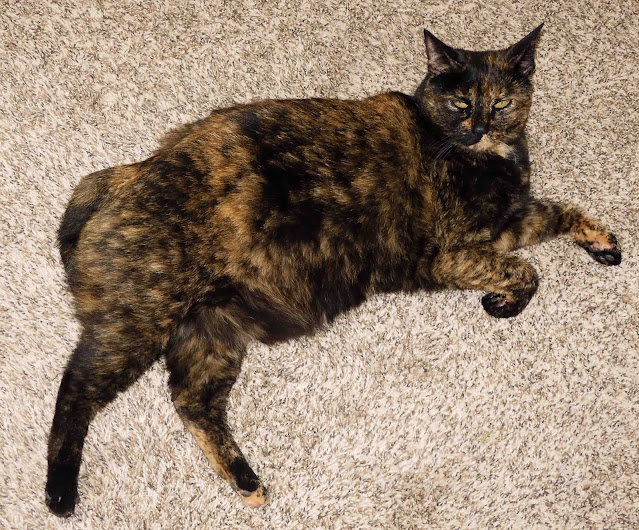 I was able to get the next row of six blocks made for the City Bank quilt. This is a scrap quilt, designed to use my blue and green scraps. The pattern also has a lavender "surprise" block. I haven't decided yet whether I'll add in the lavender, or just keep it to all blues and greens. Heaven knows, I have lots of blue and green scraps. 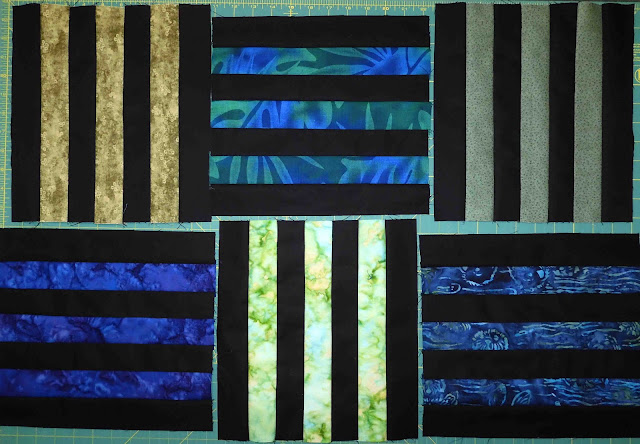 There are 42 blocks for this quilt altogether, and I have 12 so far. 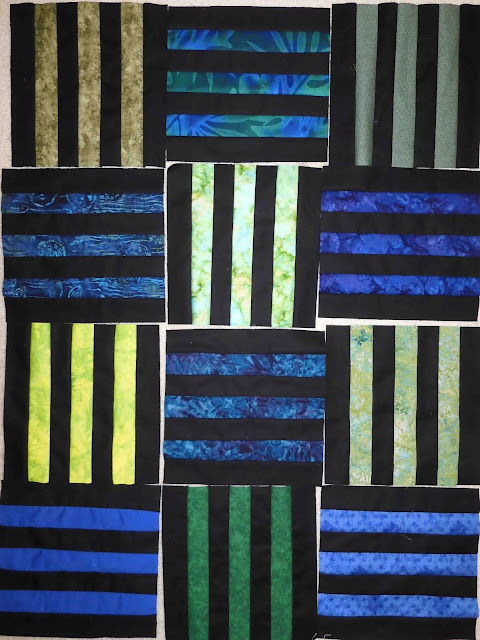 Since I'm close to finishing off the Snowflake, I decided to trace out the 10th block for the Appalachian Memories quilt. This is the Mariner's Compass block. 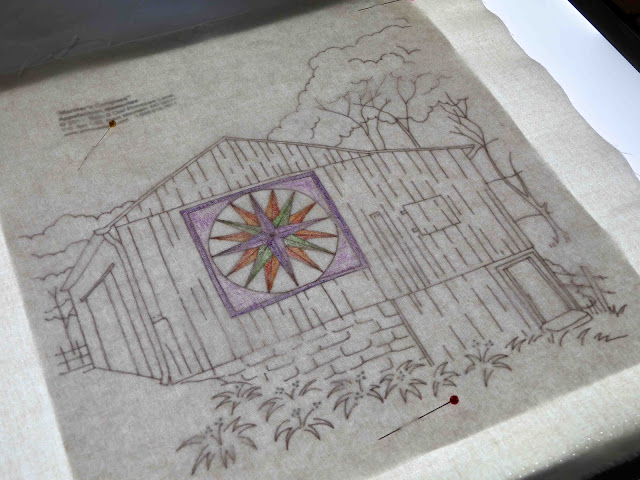 It was hard to know how to color the Mariner's Compass, and so I searched for one I liked online and used the same colors. 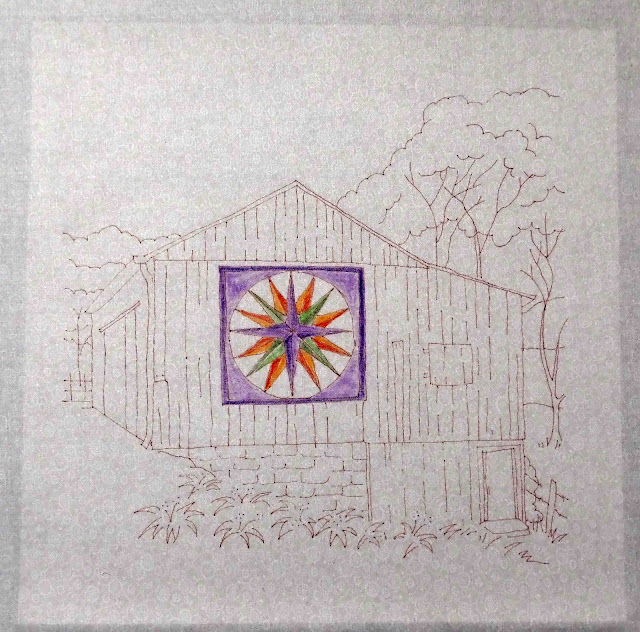 Now, it's hooped up and waiting for its turn under my needle. 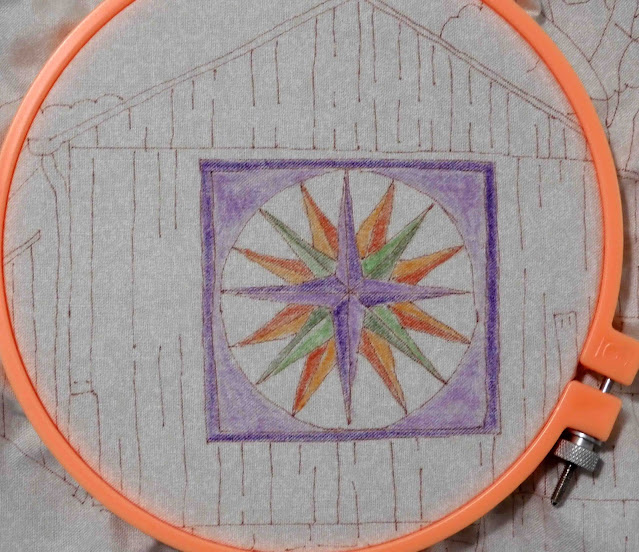 Sadie was bold during all of this. She decided to take up the top rung of the kitty pole, which is well known to be Smitty's exclusive domain. When he decided he wanted the space back, he simply jumped up there with her. She acceded to his demand that she move. There were no fisticuffs. 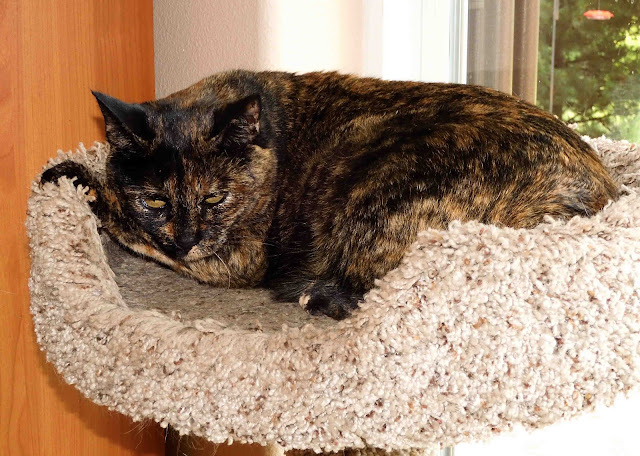 Our string of sunshiny days seems to have come to an end. It's quite dark outside, and we're expecting rain off and on throughout the day. I'm going to do some cooking today. I'm trying a new meat loaf recipe. I know...meat loaf. It doesn't sound very exciting, but if everything works out, this will be a new way of doing it. I'll say more later.
Also, I'm going to make my little Apricot-Cherry Upside-Down Mini Cakes. These are so good. I make them every year when the apricots and cherries appear in the grocery store at the same time. Here are some a made a couple of years ago. 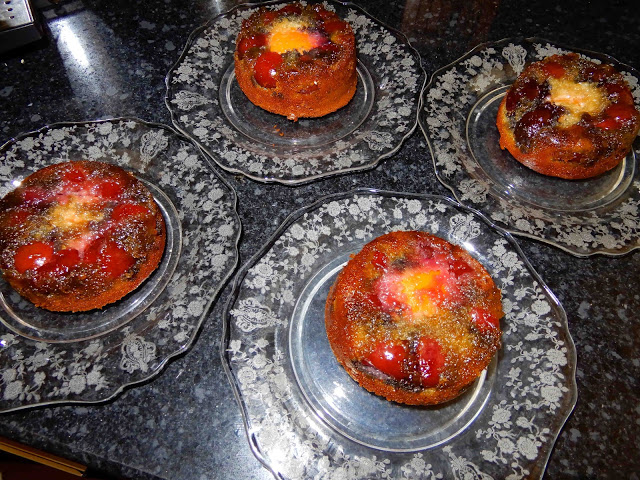 The recipe is from Cooking Light, and so it's a relatively low-calorie, low-fat dessert. But mostly, it's just really yummy. Also, I need to catch up on a little bit of housework.
There should be plenty of time for sewing, and so I'll be making the next block for the Ties & Tails quilt. So far, I've made the "tall cat." 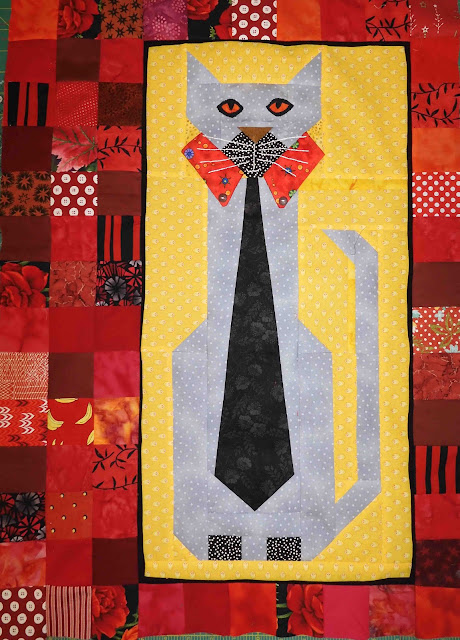 Next, I'll be making the "sitting cat with bird," which is the middle cat in the top row. 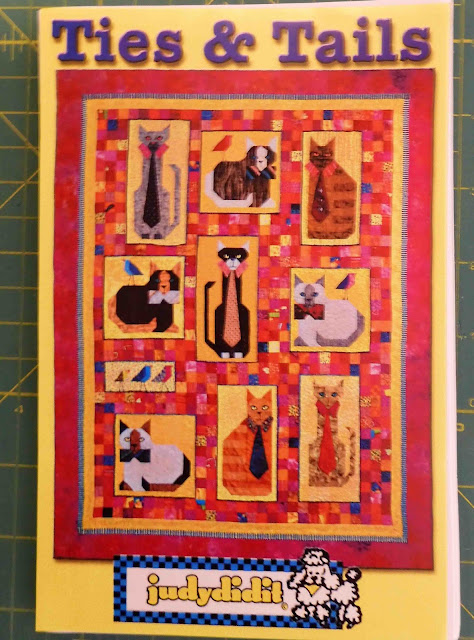 These are put together with a combination of paper-piecing and traditional piecing in the way Pam Bono made her quilts. Everything is measured and laid out in a sort of grid before being sewn together.
Okay, so from here, I'll get back to the Snowflake block. I'm hoping to finish it off today, and then I'll have something to show you tomorrow. Oh yes...and the peony hasn't bloomed. You wanted to know, didn't you?
Posted by Barbara at 9:05 AM

This Ties & Tails quilt is cute! Love your cats, both, the pieced and the real one!
Fee free to join us by Sunday ;)

maybe if you went out and sang to the peony it would open up--they do take a long time though--so hang in there!!
the snowflake is looking rather handsome with all that stitchning--and I will be waiting to see the next cat one!!
have a great week end--
luv, di
oh and the kitties are saying that Aunty Di says they can have an extra treat today!!!

Snowflake is really lovely...coming along so well...
Ties and Tails is so cute...
My peony is still hibernating; but my irises have bloomed --so lovely...
Julierose

Please tell me where you got that lovely furry orb pillow. It doesn’t match my summer decor but might be nice next winter.

Both kitties look quite content. My furkids enjoyed the guest bed as we dropped 40 degrees over night - brrr. Still only dandelions here, but I noticed a lot of buds on the rose bushes.

The apricot and cherry upside down cake has come into our seasonal rotation too. I plan to make it next Friday. The snowflakes are quite lovely. This one certainly is many more stitches but worth the effort. It is stunning.

It was a quiet night here. All,I did was sit like a toad on a log. I think the blehs have arrived. The last straw was my machine being sent to the shop. It seems so many items have broken around here and I a, reaching my limit. At least the machine will be fixed. 3 weeks before I hear whatvthe prognosis is and what it will take to fix it.

Just found your blog- and I love all of your projects plus admire the handwork you do. That Snowflake! I'll look forward to seeing your other cat blocks emerge, and watch for the New Mexico kitchen ones, too. All fun sewing. I can see that the cats are a big help around the place.

A grocery store run is stressful! I do ours because DH is in the danger zone so it falls to me. I go during the seniors window but that means getting up at dark-thirty in the morning so I'm on their doorstep at 7 am. Alas no kitties in our house any longer - hubby developed a bad allergy so no more furry friends for us. Loved seeing your projects you're working on, but particularly that wonderful barn!! I have an interest in them for sure!

Glad your solo flight went well. You sure got a lot done along with the shopping though! That snowflake is going to be so pretty when it's all finished. Love the barn block with those pretty colors for the Mariner's Compass. Those upside down cakes look yummy, and of course, I like the cat blocks. Glad the kitties were able to be out a bit; looks like they thoroughly enjoyed it.

I love the snowflake, it's so pretty now and will be amazing when finished and the beads added.I like the barn with the mariners compass block. I wish we had barns with quilt blocks on. I have seen one but I can't remember where it was.