Saturdays Are For Sewing

Well, it's happened, my friends. Oregon is now under a "stay at home," order, although according to that link, it's something short of an "order." And let me just say that's fine by me. I'm happy to stay home, and happy to have the excuse of saying something akin to, "Oh, well, you know...I couldn't possibly come out today. I have important sewing business at home." So there you have it. Sewing, sewing, sewing...all the time sewing. It's like looking into the abyss and shouting....Par-teeeeeeeeee!

What better day to return to the sewing room than... 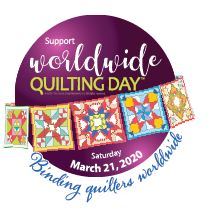 What's on your sewing agenda for today? As for me, I finally got everything organized. It was fun unpacking the fabrics I brought home from our trip. It's a little like going shopping in another quilt shop...only it's my own sewing room! And whoever picked these really knew what I like! 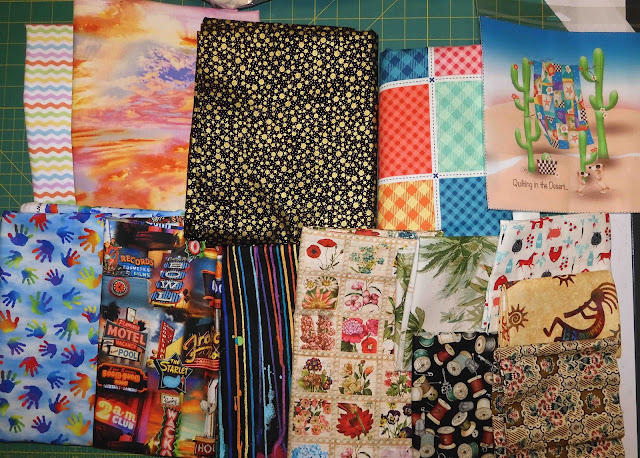 Some projects have already spoken for a few of these. Others went into my stash. A few were set aside for a future "Shop Hop" project. I have 12 fabrics collected for that quilt now. I'll probably add more since the blocks I'm planning will be small. Nevertheless, I can get started on them.

Also, you might remember this lamp I bought at the Road to California quilt show back in January. 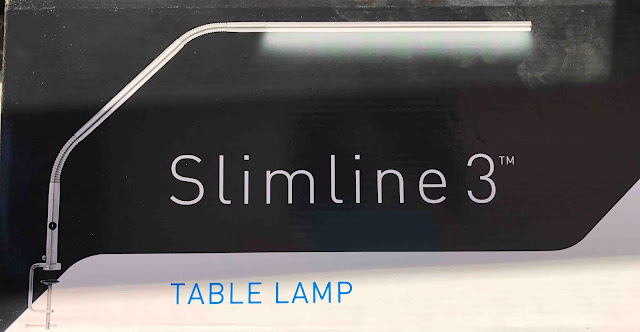 Finally, it's out of its box and set up at my sewing table. I really like it. It's sleek and slim. Big Bertha is happy about it too...why, she looks ten years younger next to this modern lamp. 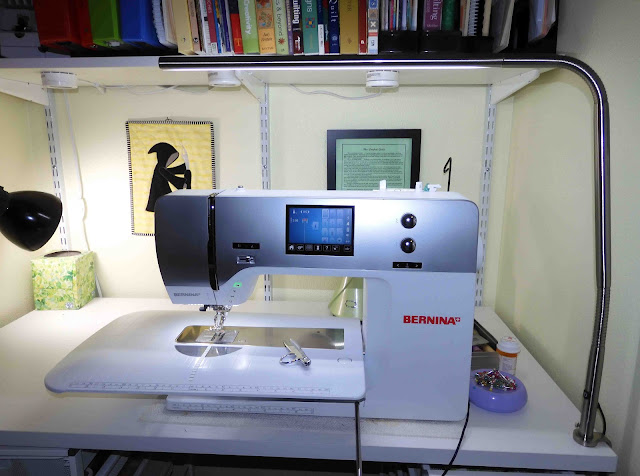 There is a bracket on the underside of my sewing table, making its current location the only place I can put it...unless I put it on the other side, but then it's in the way of whatever I'm working on. The real beauty of this lamp is that it's adjustable at two points on the arm, 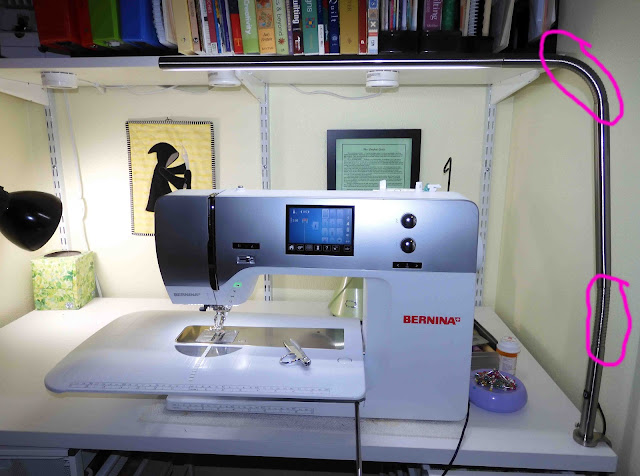 and the light itself also swivels. You can put the brightness right where you want it. It has four levels of brightness and turns on to the brightest setting first. So, I'm happy with this purchase. I'm looking forward to putting it to work.

So what are you working on today? My first project in line is to quilt and bind this little wall-hanging, finished up while we were traveling. I have a back selected, but I've had second thoughts about it. I might decide on something different. This is the "Farm Fresh Eggs" pattern from Bird Brain Designs. 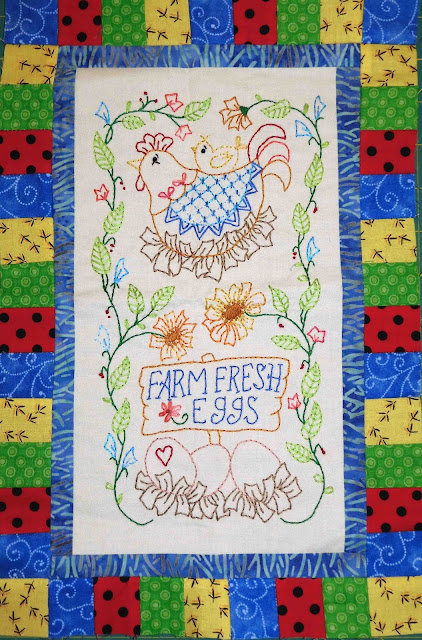 I'll quilt it fairly lightly since it's a small quilt. It shouldn't take too long.

As I mentioned, the squirrels are very happy to have us back. Now that the birdfeeders are out, they are sitting in Fat City...and I do mean "fat." 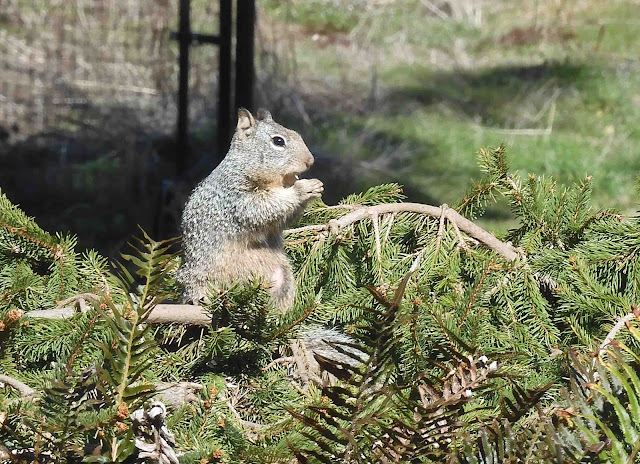 When he saw me with the camera, he turned for a more professional portrait. This one will be his Linked In photo. 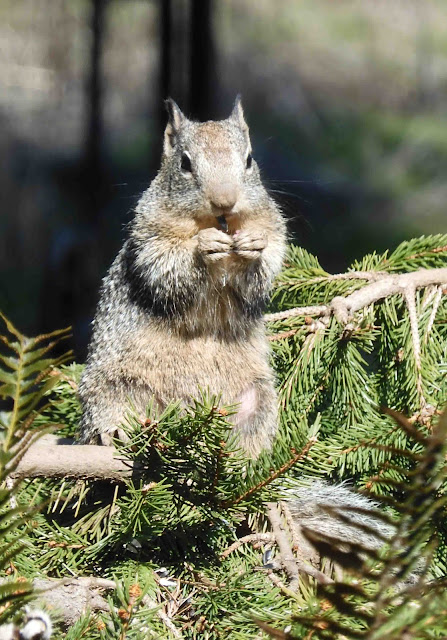 Also, there are a few more blooming things in the garden. I took this picture of the tulips the other day, but it didn't turn out. Here they are again. The deer forgot to eat these. 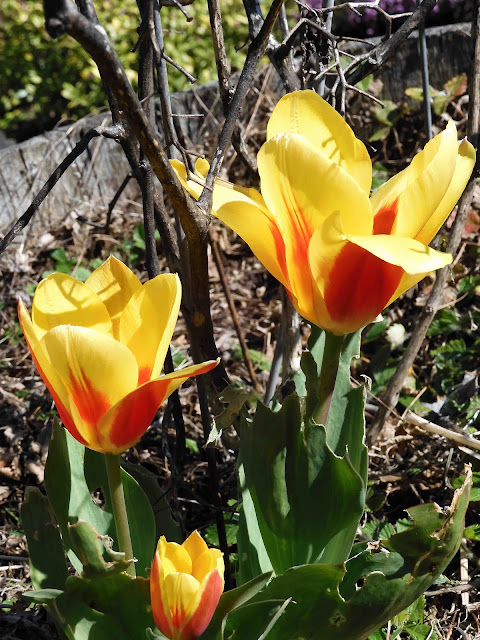 Also, the star magnolia is getting ready to bloom. It's interesting to me how things change from year to year. This picture was taken yesterday, March 20th. 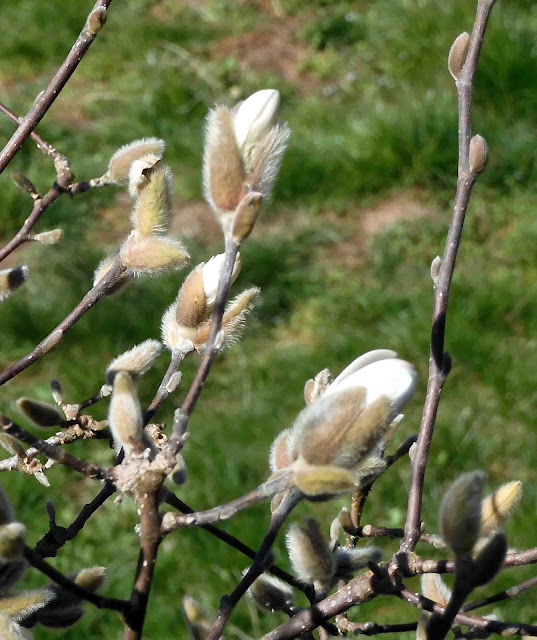 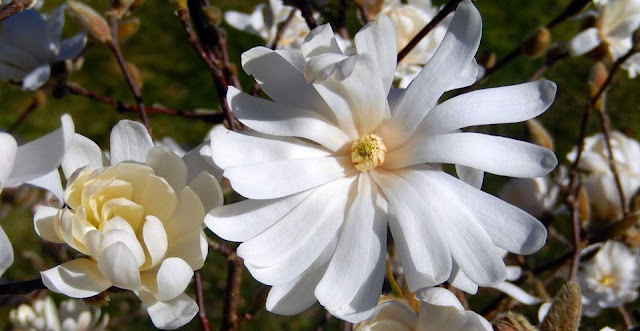 I'm really hoping the rain holds off until the flowers open. It's petals are delicate and easily bruised by rain drops. It's a rare season that we get such beautiful unblemished flowers.

Some things never change though. Kitties still love their catio. 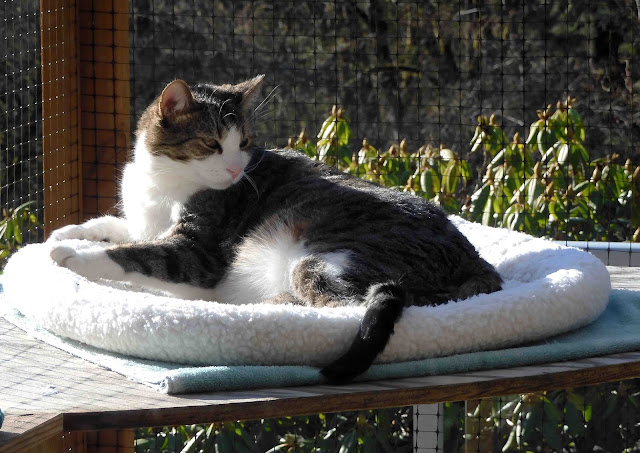 Eventually, he moved to the catwalk between his corner station and the ladder...which neither cat has ever climbed, but we keep hoping. 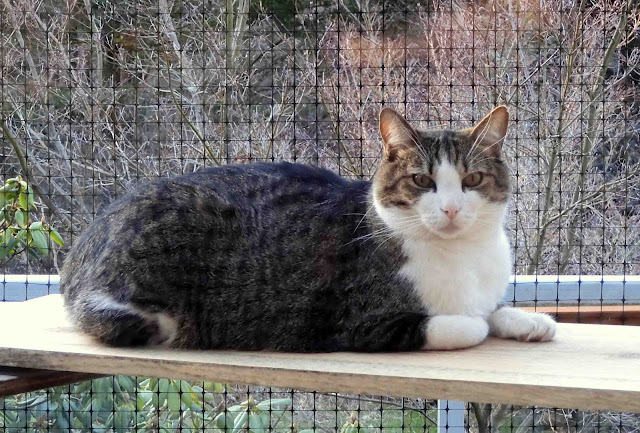 Sadie prefers the station next to the house where the afternoon sun warms the walls and her furry self. I had to go outside and shoot through the fence for her picture. 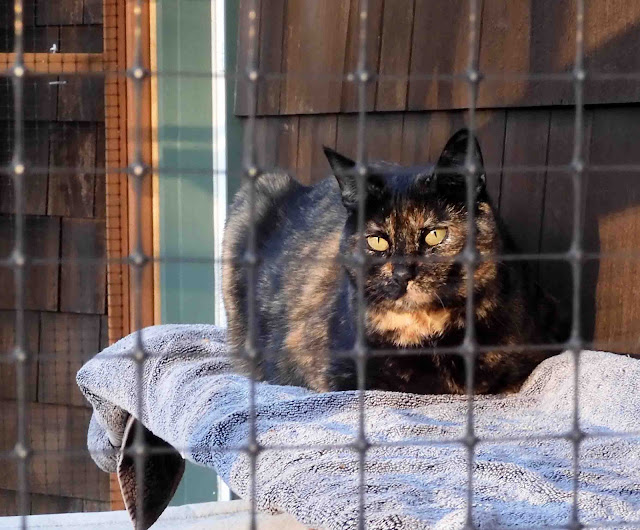 As you might remember, both kitties became indoor-only kitties last spring. While we were traveling, we wondered why we never took them out for leashed walks at home. No reason...we've just never done it. So yesterday, Mike got Smitty out for a walk on his leash. He thoroughly enjoyed it. We'll try getting Sadie out today. If she slips her harness here at home, it won't be the disaster it was when it happened in North Dakota. We'll give her a chance, but if she's going to slip her harness, we probably won't do it. The decision is all in her paws.

Okay, so back to the sewing grind...let me just dry my tears before I go on. (Sniff.) It's good to be unpacked, and it's good to be home. I told Mike I was going to sew all weekend, and resume usual housekeeping chores and gardening on Monday. And, oh my...what a lot of yard clean-up there is. It'll have to wait though. The next two days are mine.
Posted by Barbara at 8:58 AM

Reading your posts always brightens my day! I particularly giggled at the squirrel's LinkedIn picture. Thanks! Off to my quilting room to see what trouble I can get into...

Illinois is also shut down. My job is considered 'essential' so I'll still be going to work every day (home health care worker). What with checking on family and friends, I have even less time for sewing than normal.

Oh glad you are settling back in--re-entry;))) Welcome...

Really cute "Fresh Eggs" block...You did really well on buying fabric on your trip...will be watching to see them pop up in projects...

I was able to "eke out" 4 more teal Ojos today; the itty-bitty bits will go into a few more crumb-ey blocks and then it'll be try to
put it all together time...a few ideas are popping in my head...
( the back says "no-no==but there's "yes Yes" in my mind--are you old enough to even know that song??? a bit paraphrased of course )
Hugs Julierose

I can bet those furry kitties are so happy to be home again--I know they would rather be with you in that RV than being left at home--but home--is where they can 'roam' to their hearts content now!! and even go out for a walk each day and not have to worry about 'mens' and woofies'!!!
happy sewing--
luv, di

i look forward to your blog posts daily. You have such a snarky sense of humor, I love it! Glad you guys are safely home and the kitt-ehs are back to their routines. Yes, it is such a chore to stay at home and have to sew all day, only thing that can make it slightly better is to have a lil bit of rain, so I don't have to tap down the guilt of not weeding. (But this too will pass..)

Happily the stay at home order does not apply to cats. I will be dropping Molly and Buddy off for their play date in an hour. Enjoy!

Nice planning on that yard work. The rains return Monday. I am enjoying our enforced home time. My husband is going a bit stir-crazy since we have already stayed home for more than a week. We thought when this started that it would only be for a couple of weeks. We are beginning to think it might be longer. My husband really things he has already had the virus but there are no tests to confirm that yet. And if he had it it would have been early in the timeline. But our son in Beaverton came down with something last week and thinks he had a mild case. His symptoms are almost identical to my husbands. It was either COVID or some other virus that is different than the flu or a common cold. I guess this year we will not have as many people die of the flu with everyone staying home and washing hands.

Happy qui!t day to you as well. Glad you asked what qui!ty thing I did. Planned way in advance for this. No, we're not in lock down... Yet.
Spent all day at the lqs. We did pineapple paperpiecing. Know it's not your thing, but it for me. Wahoo!
Really, really enjoyed the day.
Master Smitty sure looks to be glad he brought you home. Wonder if you hadn't come home when you did if they would let you come back in??

Really enjoyed your opening paragraph, Barb. Love your purchases and your quilt plans. I’m totally envious of your garden...but our snow is almost all gone so soon we will have shoots. The catio is such a great idea and I’m sure the squirrels think so too. Self isolating here which is no problem for two introverts.

So glad you ALL are home safe and sound and healthy. I so enjoyed the last road trip with you. I think maybe WA might be the next "lock down" state. But I work in the shipping world, so will that include me ?? Wash hands, stay 6' away, and sew on :-)

Welcome back home! It’s good to see that spring has arrived somewhere. Enjoy your sewing weekend.

I have one of those lamps too. Best find ever. The sun has finally come out here in the UK and we too are “socially distancing”. It’s funny how hobbies were viewed as almost nerdy till this happened. I guess us sewists/hobbyists will have the best indoor time now. Love your purchases and keep writing. These daily posts have saved my sanity over the last three months of home confinement (back injury) but at least I can embroider

Lol on the squirrel Linked-In photo! Nice selection of fabrics - I particularly like that black metallic and the two right below it. I hope you had good luck with Sadie; she is so pretty and sweet looking. That little Fresh Eggs piece is very cute.
I was all set to play with RSC scraps yesterday (Saturday) but my lazy self wanted to be on the sofa under a blanket reading and watching TV while it rained outside. Oh well, today is another day.

Okay, question on the light - how many inches does the bracket expand? My table has a deep lip on it, so hubs would likely have to build a piece to clamp the light to (awkward sentence, sorry). My SIL sells the lamp in her shop, so I'm seriously tempted. I made an entire quilt top yesterday (small). Not sure what I will work on today. We'll see what inspo hits when I get my feet in the room. I'm thinking Wilbs would like a catio; not sure I can convince the man though! :-)

Love the squirrel photos. I've had an explosion of nuisance birds-crows, graco's, Starlings and red-wing blackbirds. They gobble everything up. I counted 9 squirrels. My poor cardinals, chickadees and Goldfinches are being bullied. The nuisance birds and squirrels devoured all of the suet so my woodpeckers have nothing. I'm not putting any more food out. I would love to stay at home but unfortunately I have to take Mom and my brother to doctor appointments, pick up their meds, and I dread the thought of venturing out for food and supplies. People are still hoarding and fighting over stuff. Illinois is sheltered at home otherwise. Stay safe

Well, the squirrels sure do love you being home! Great pictures too. Only one of our daffodils has opened, the others are awaiting their perfect time. Can't believe the price at the local market, 2.99 for one roll of TP!

A whole weekend for sewing, that is heavenly. I hope it was all you'd hoped for. The new lamp looks like it will prove to be very useful. Getting enough light when you need it can be a problem.