It was all sewing, all the time yesterday...except for laundry. Laundry days make good sewing days, I've found. I can be completely decadent with my sewing time, all the while feeling as if I'm accomplishing something on the housework front. So let's just see what happened, shall we?

First...slow stitching. Always slow stitching, if I have my way about it. I've stitched up the left side of the latest Dancing Chickens and Flying Pigs block. 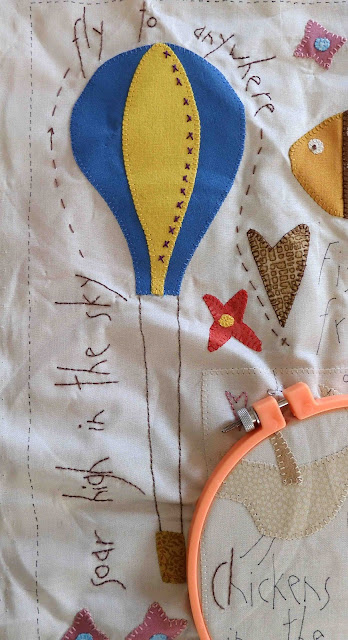 Now I've moved the hoop to the right side, and this one should be finished in a couple of days. 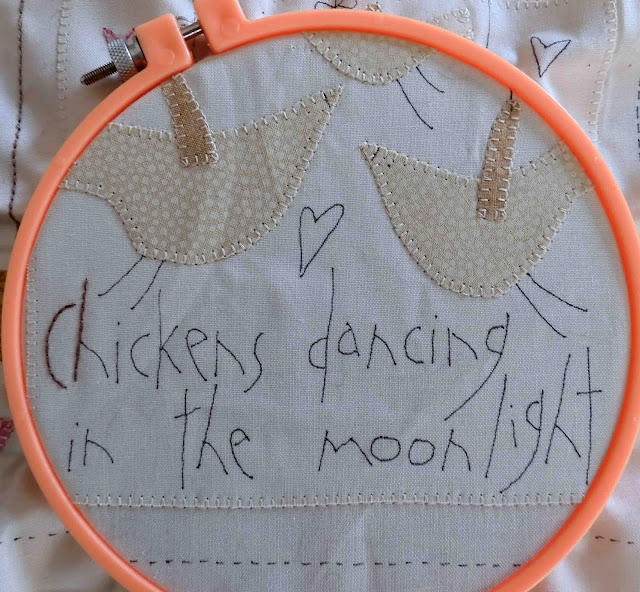 This, being Sunday, I'll be linking up to:

Okay, and so for my first trick, I wanted to catch up on the Tiny Tuesday blocks. The first was set diagonally. This one is called Floating Stairs. 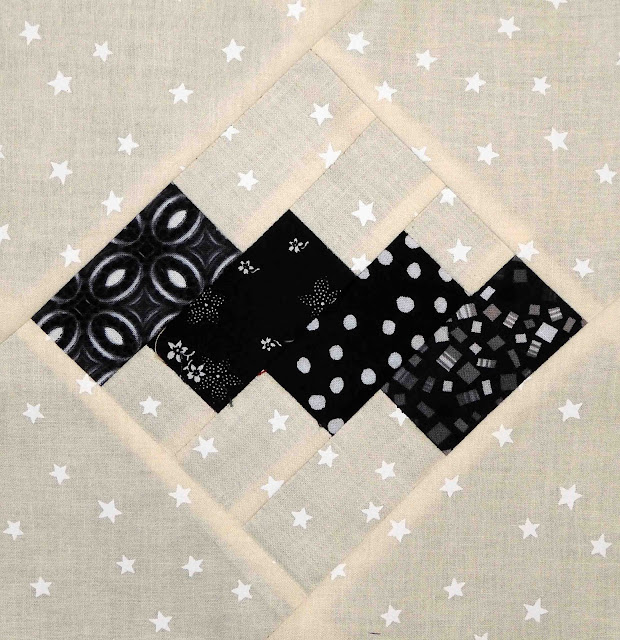 Then I went to work on the most recently released block...this Geese Circle. I used my tiniest scraps for these two blocks. 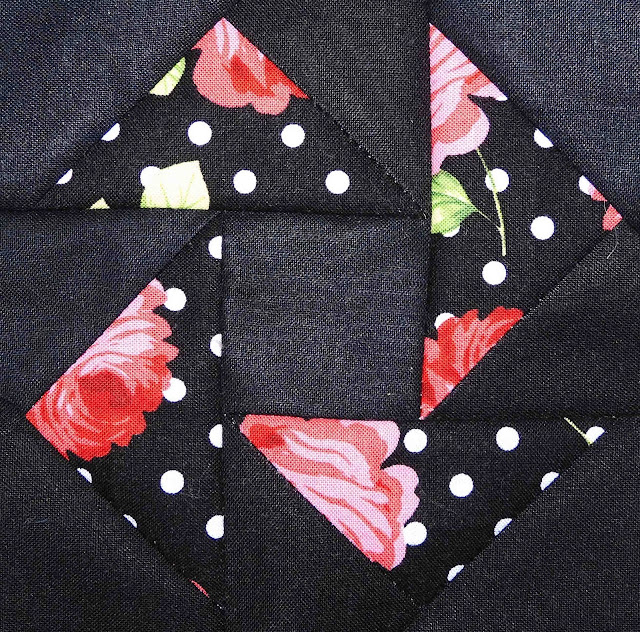 This one was straight set. 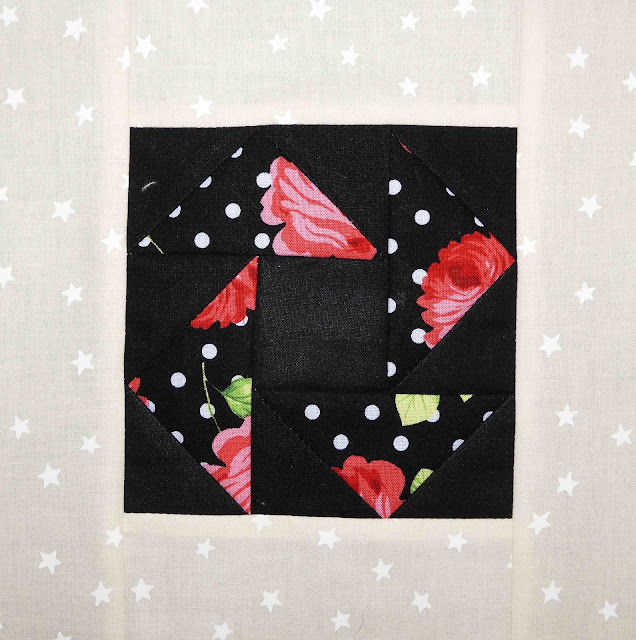 With those two finished, I'm all caught up. Hip, Hip, Hooray!

I have 41 blocks so far for this quilt. I laid them all out to get a look. When this quilt is sashed and border strips added, it's going to be fairly large. 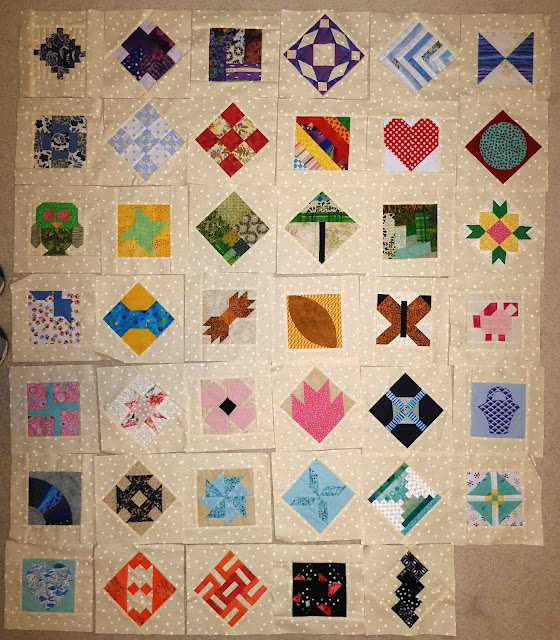 After that, it was time to get started on the September blocks for Paintbox Pizazz. Smitty really likes this quilt, and so he wanted to get in on the fabric selection. 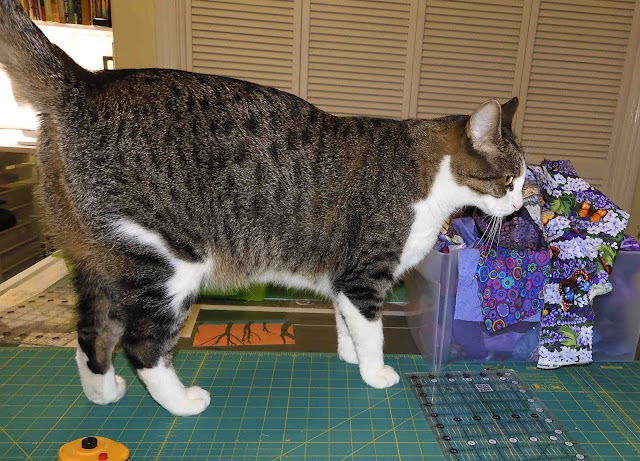 Smitty did an intervention on himself during our Colorado trip. Traveling in a legal state, his catnip habit really got out of control. Now, his catnip usage is limited to aroma therapy. He simply sniffs at the bowl to get a whiff, and avoids imbibing as much as possible.

No, not really, but how else would you caption the image below? 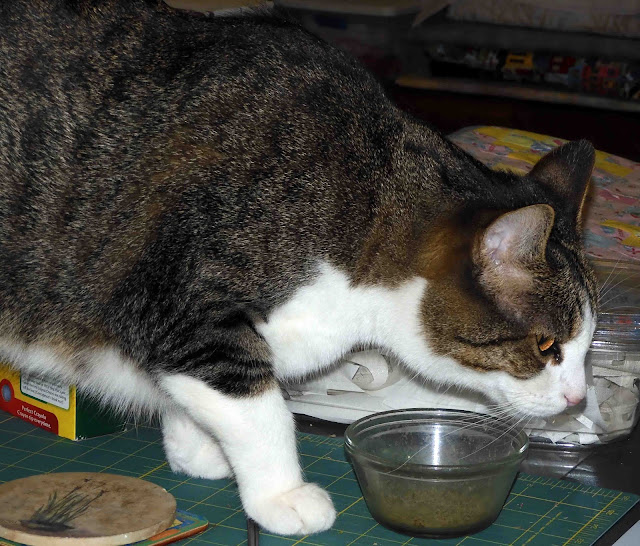 After we'd selected our fabrics, he turned the sewing effort over to Sadie. He's teaching her the tricks of the trade. He won't always be around to help out, you know. Sometimes he'll be blissed out on catnip, and so he's taking care of business by teaching Sadie everything he knows about quilting. 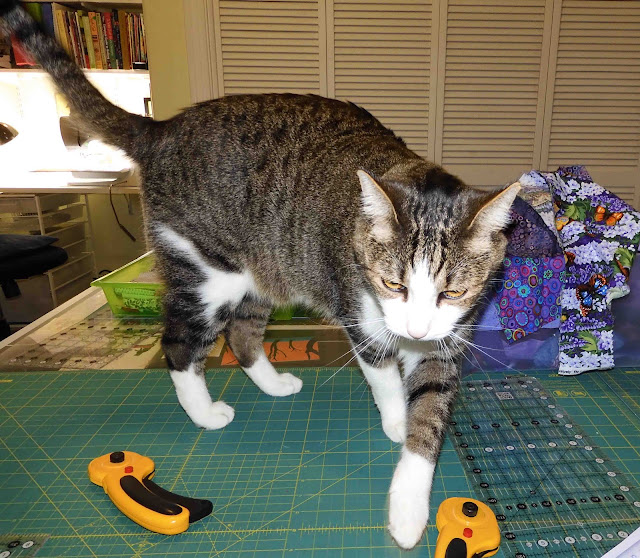 First, we sewed them into pinwheels. 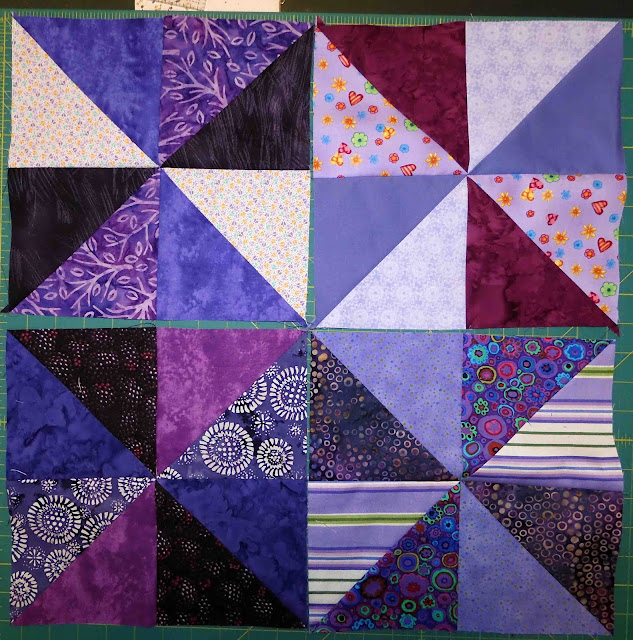 Then, we held them down. Pinwheels...always turning round and round. 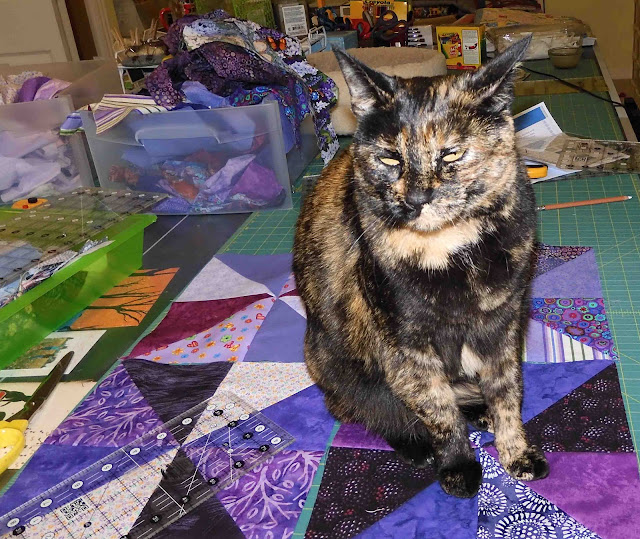 Then, she helped me purrsition my ruler to cut the black and white squares. 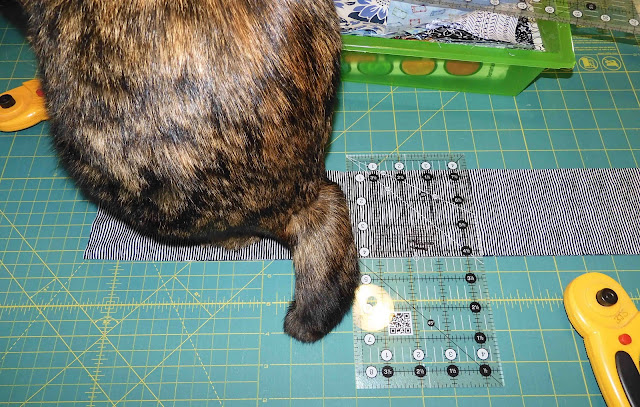 When I had them sewn to the corners of the blocks, she helped me hold them down while I got my rotary cutter and ruler. 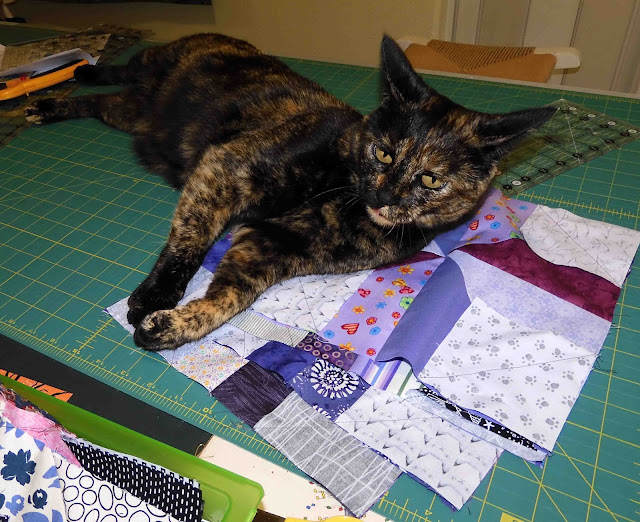 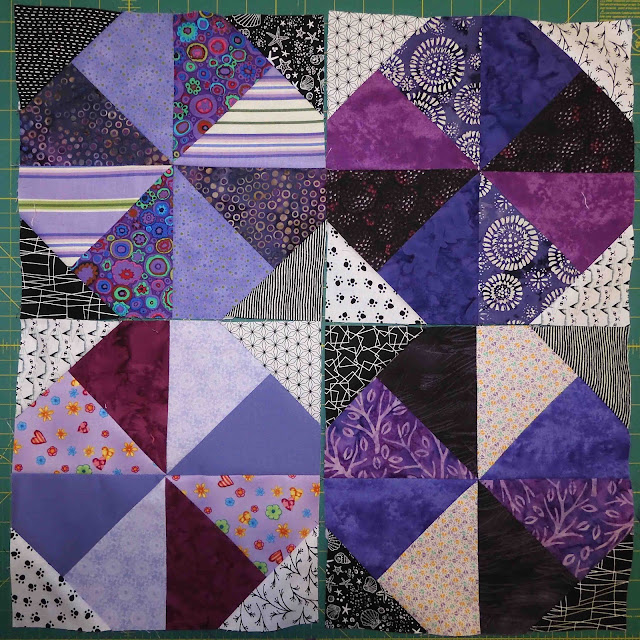 She thought we were finished then, and so she settled herself into her bed for a nap. 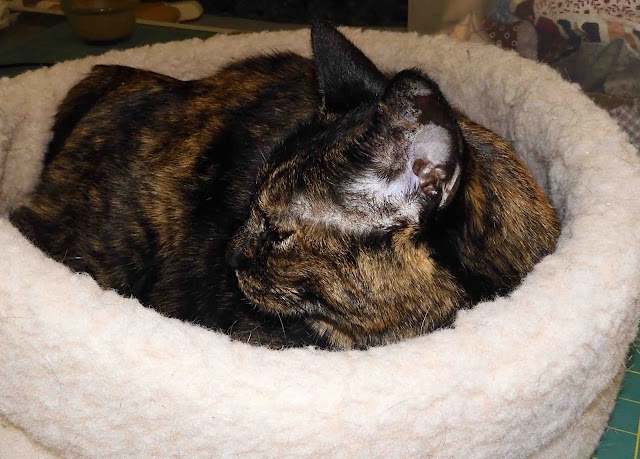 While she was napping, I had some time to sew October's brown blocks together. She only awakened in time to help me take a picture. Um...excuse me. Purrdon me. Could you just move a little... 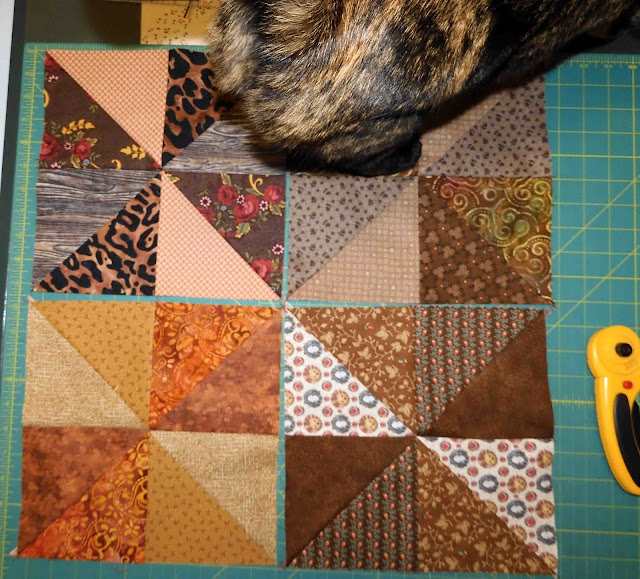 Okay. There we go. 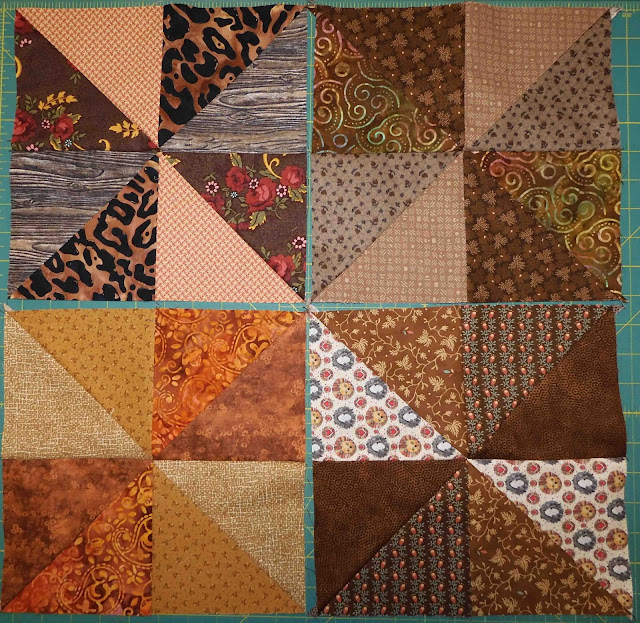 And then I sewed their blacks and whites to the corners, trimmed them up, and Voila! Pinwheel Pizazz is caught up too. 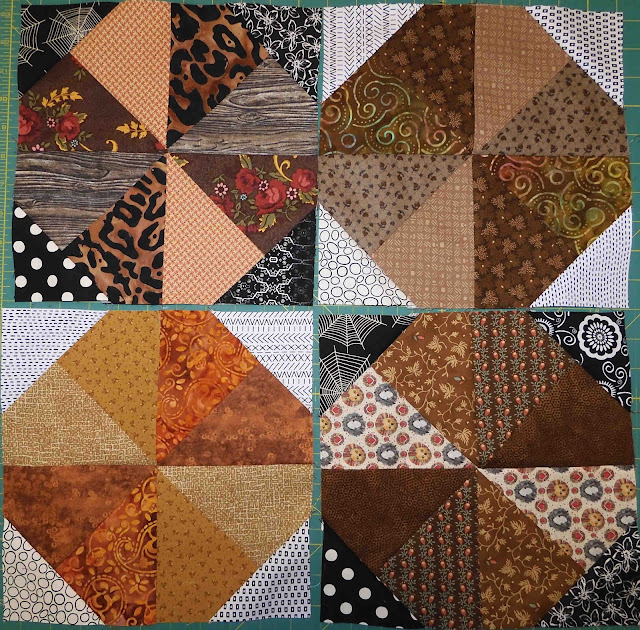 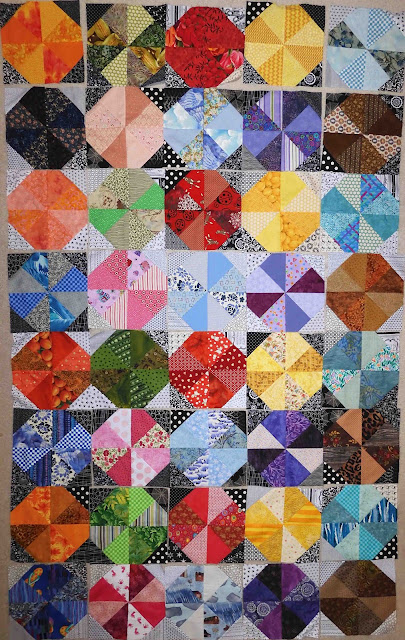 There are still eight more blocks to make for this quilt. All the colors have been selected for this year's challenge, and so I think I'll make the final eight blocks from combinations of fabrics that don't fit neatly into any color category. I have this all worked out in my head, and so I'll tell you more about it when I get around to sewing them. Showing is easier than telling.

And after all that, plus her nap being interrupted by brown pinwheels, Sadie was nigh-on exhausted. 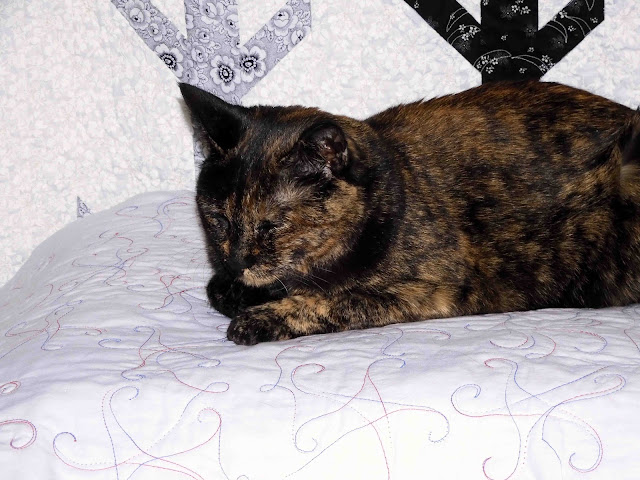 And that was okay because it was the end of my sewing day. I'd already done way more than expected.

Today I'll be canning apple pie filling. I don't think it will take the whole day, and so there might be time for sewing. Mike was making noises about picking up a wine shipment today too, and so we might head out to the wineries instead. Only time will tell. For now, I'm going to get back to my morning's slow stitching.
Posted by Barbara at 8:37 AM

Just lovely blocks and your dancing chickens are so great...nice work glad you had your helpers on hand...;))) hugs, Julierose

Love the blocks you've made and both your really helpful kitties. The dancing chickens and flying pigs block is such fun.

You truly do have the most relaxed cats. How fun to have them helping you. Love your little flying chickens and your quilt with all those gorgeous and different blocks is lovely. Love all the pretty details in each block. Each one looks fabulous. They play nicely together, don't they.

Oh, those chickens and pigs! I love them!

The dancing chickens is going to be such a fun piece to finish. Great job on getting caught up on all you blocks - I'm still behind.

You get a lot of quilting help from your cats! They certainly like to stick close to you.

I'll bet those pinwheels spin a little faster after imbibing, too. I think Smitty looks like he is about to tell the Sommelier that he approves the nip. After all, 2019 is an excellent vintage.

You have some beautiful fabrics! Your kitties are so sweet. It's so funny the way they want to be in on the action. I've a dog who always helps when I lay a project on the floor!

Your helpers really do assist a lot with progress in the sewing room. Love the pigs and chickens!

Well, by the time you read this comment, you'll be well into apples or wine, or both. I could've brought Wilbur over to join Sadie and Smitty in the quilt room. He'd be a big help :-) Your blocks are looking good, with all that pinwheel colorfulness. Is it difficult to stop the slow stitching in the morning and get to the rest of your day? I'd want to sit and sew the whole day!

I like how Sadie's butt matches the brown blocks :)

May we have purrmission to use the photo of your cat Sadie sitting next to the ruler on the cutting mat. We would like to use it in our accident prevention literature.

Love all your blocks, the colours and fabrics really work.

I live in Colorado now Smitty, and I have to just sniff wine since there is a lot of it here and a person could easily get too much!
where did you go in CO?
LeeAnna

I forget - what size are the tiny blocks? They are looking very nice. I really like the Floating Stairs. I might play with that one and see what kind of secondary pattern shows up, without the on-point setting.
You are closing in on the Paintbox Pizazz blocks - glad you have Smitty & Sadie to help you out on those. :)