A large quilt always has me dragging my feet at the end. I get bored with the quilting, and my wrist and shoulders get tired. With several breaks to fortify my resolve, I finished quilting the Wine Country quilt yesterday. When it was all done, I took it downstairs and laid it out in front of the living room windows where the light is best for this kind of shot. 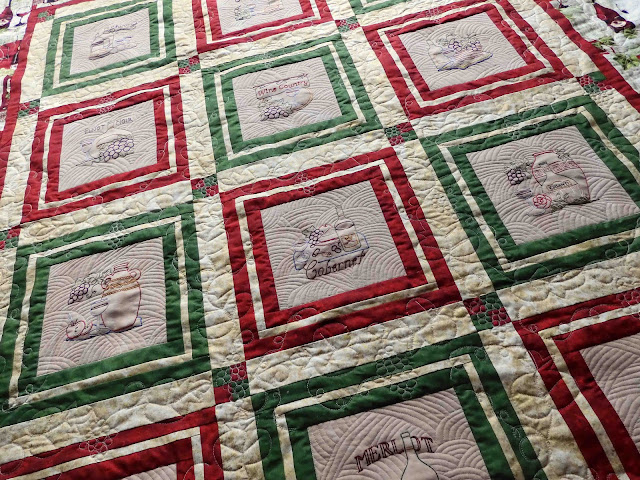 It's a large quilt, and I stood on a stool and took this shot from the side...which is why it has kind of a weird angle to it...but there's the whole thing. 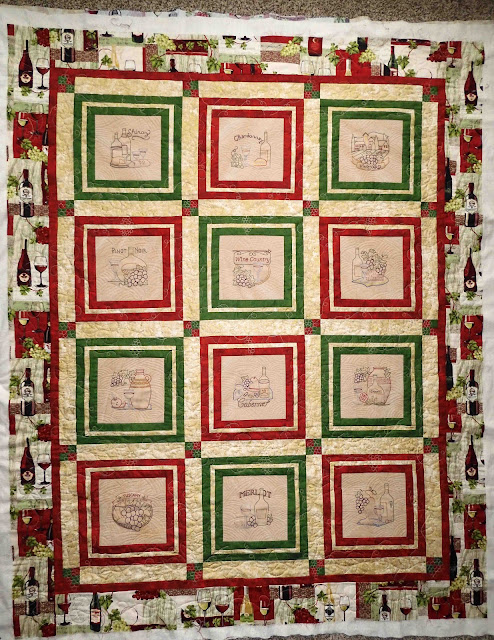 And don't you know when you lay a quilt on the floor, it's essentially an invitation to the quilt inspectors. They show up almost immediately. 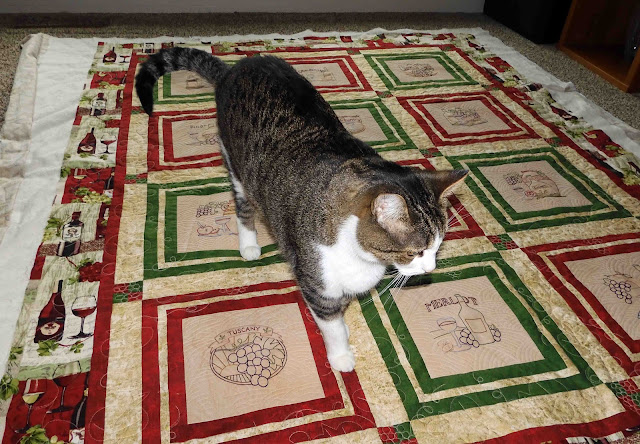 Sadie prefers to get back a distance and get a look from far away. 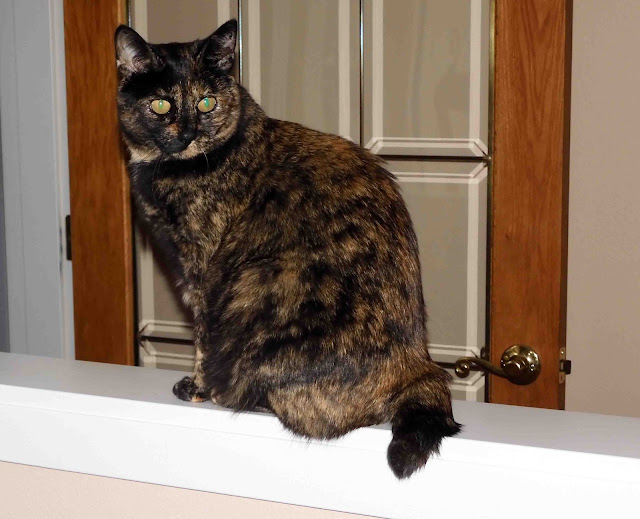 They looked at it both front and back.

Purrsonally, I'd have purrfurred a "Catnip Country" quilt, but I suppose wine will have to do for now. 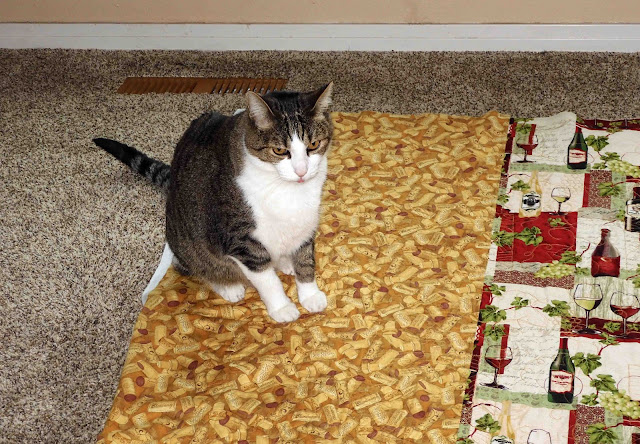 They were momentarily distracted by something outside the window. 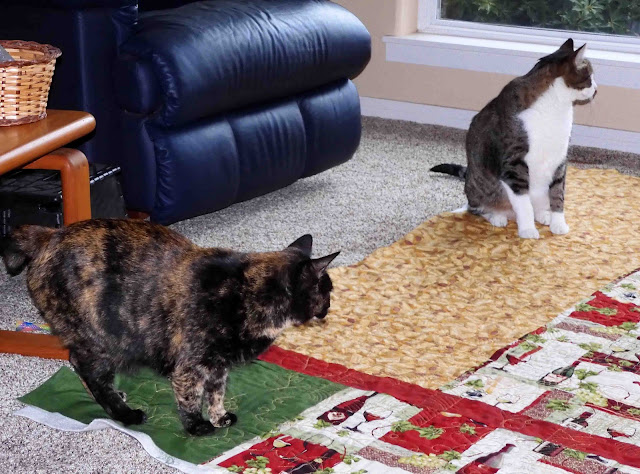 Shortly after that, they rendered their final verdict. 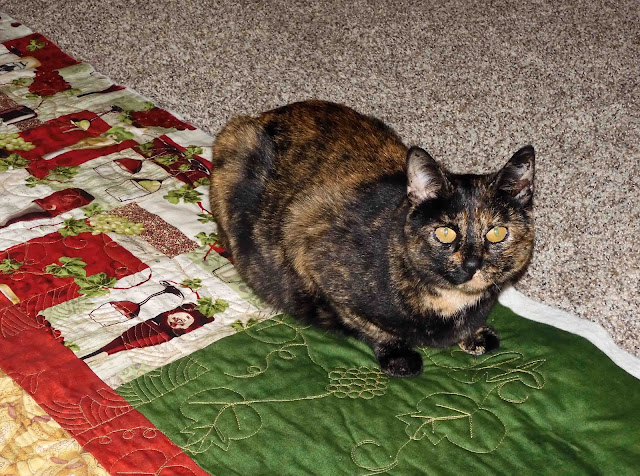 Okay, so with that go-ahead, it was time to try out the little mini iron from Oliso. As I mentioned in yesterday's post (I think), this little iron was reviewed by my friend Wendy in a recent blog post. It sure is a cute little thing. 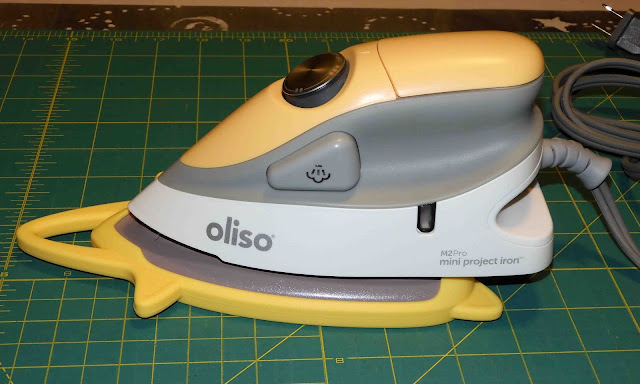 I've had a travel iron for years, but it isn't a good iron for quilting because it doesn't get hot enough. I felt confident this one would work better after reading Wendy's review and also checking out the reviews on Amazon.com. My biggest question was whether it would fit in the little iron caddy I made a while back. It's approximately the same size as my other iron, and it looked as if it would fit fine. 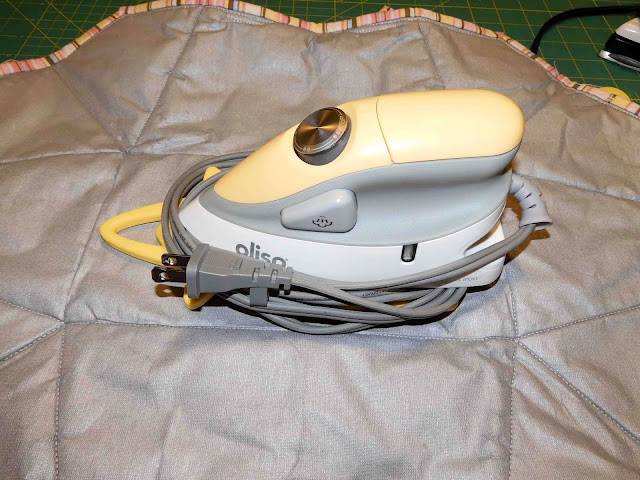 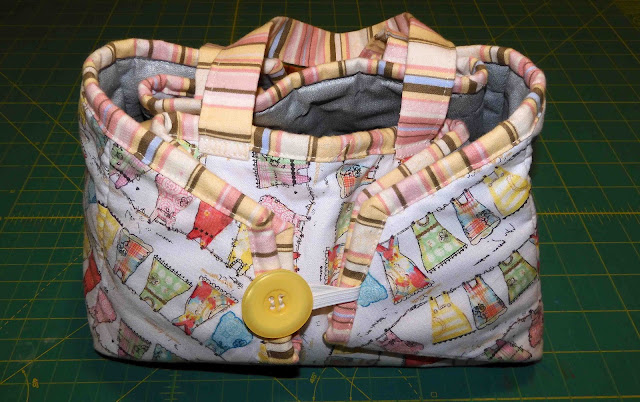 I love my little iron caddy. It came as a kit with the heat resistant interior fabric and some batting. When it's unfolded, the interior also works as a little ironing pad. It's great for retreats and classes. The patterns come in both travel iron sizes and full-sized iron sizes. You can find the pattern/kits right here.

After that, I plugged it in and tried it out. It works great, although the handle is a little different from what I'm used to. It feels a little awkward in my hand, but I'm sure I'll get used to it. It has three heat settings and a steam function. Generally, I don't use steam, preferring to spritz a little tap water onto the fabric instead. I had to turn it up to the highest setting to get the heat I wanted, but then it creased the binding strips nicely.

Then I squared up the quilt. Squaring it up meant running this obstacle course. 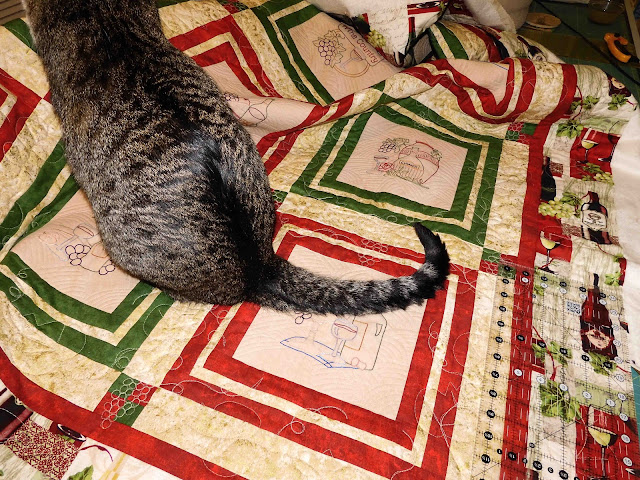 Now the binding strip and label are sitting awaiting their turn under my needle. 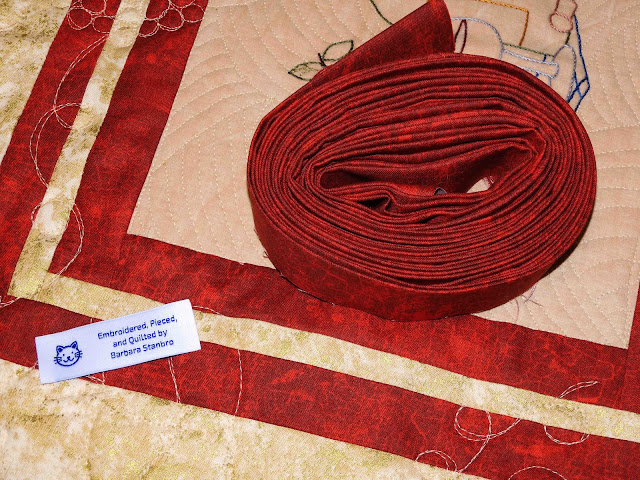 I left them overnight, under a protective dome because, you know...mice. That long strip of fabric was in serious jeopardy. 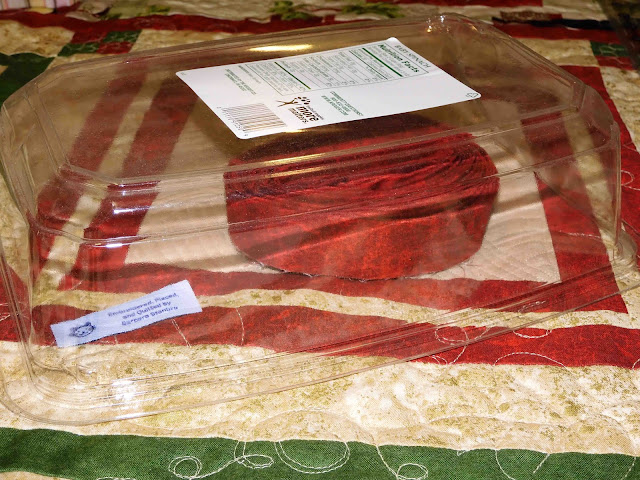 The only other sewing I did yesterday was to get a start on February's heart. I gave myself extra time on this because it was a good way to put off doing any more quilting for just a little bit longer. 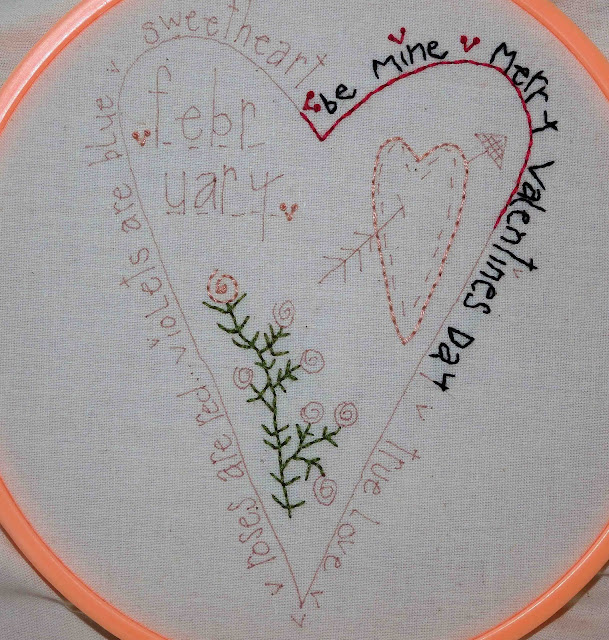 So I haven't been to the grocery store in ten days, which is kind of a course record around here. I've asked Mike to pick up a couple of things here and there, and we did stop in to get the French onion soup makings the other day. Still, I have a long list accumulated, and so that will take up most of the morning. Nevertheless, there should be plenty of time to get the binding sewn on, and to start on the hand work. A finished quilt is in the offing.
Posted by Barbara at 7:51 AM

I REALLY like the way you quilted the "rolling hills" of vineyards. Perfect! As to the inspectors, I contend they can hear fabric hit the floor at 50 paces!

Glad that iron is working out for you. I have a pink version and the handle gets too hot. It's so hot, that I can only handle it with a pot holder. I really need to contact the manufacturer. Must be an isolated defect.

Congrats on conquering the end of the road procrastination and for pulling on on your "getter done" attitude. I'm at the end of the road with Vintage Dresses and finally got the binding made, I've got the label worked out but need to print it. Maybe tonight after we do grocery shopping.

The quilting on the wine quilt looks great in the living room light!
That Oliso travel iron is cute, but I see what you mean about the handle being something to get used to. I have a 'regular' Oliso iron on my wish list on Amazon....