It was hard to keep my feet moving yesterday since I needed very badly to catch up on some housework. There will be more of that today, mixed in with some time in the kitchen, and some sewing.

As for yesterday, I carried on with my three-day loaf of bread by adding in white bread flour, rye flour, and spelt flour. It was kneaded for five minutes and then dumped into a bowl to be refrigerated for 24 hours. Doing it this way enhances the flavor of the loaf while retarding the rise. When I put it into the refrigerator it looked like this. 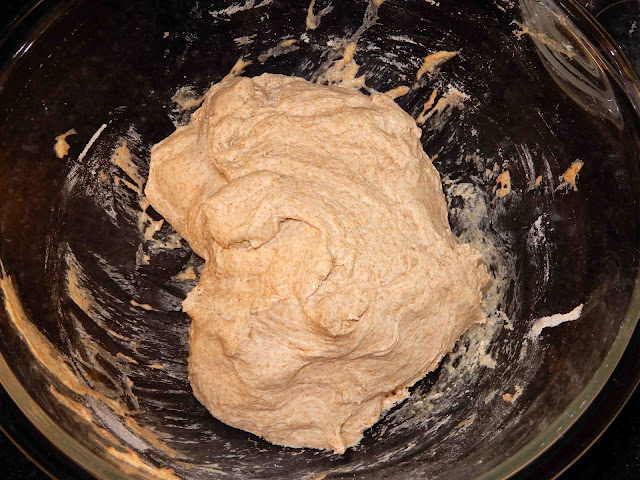 When I looked at it just now, it looked like this: 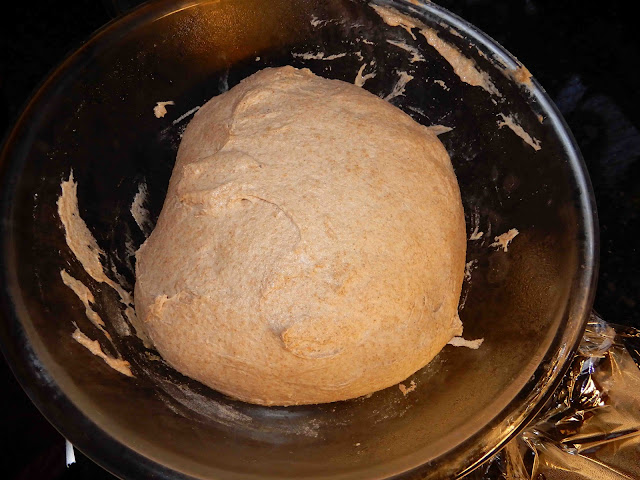 This morning I'll shape it into a boule and then put it in a proofing basket. Then it will sit at room temperature for five hours before I bake it off. I'll show you a picture of the finished loaf tomorrow. I have another loaf right behind it, one day behind in its staging.

Once I'd dealt with the bread, it was time to get outside and pick some plums. It didn't take long to pick a whole big bowl full, and this is only a fraction of what is left on the tree. 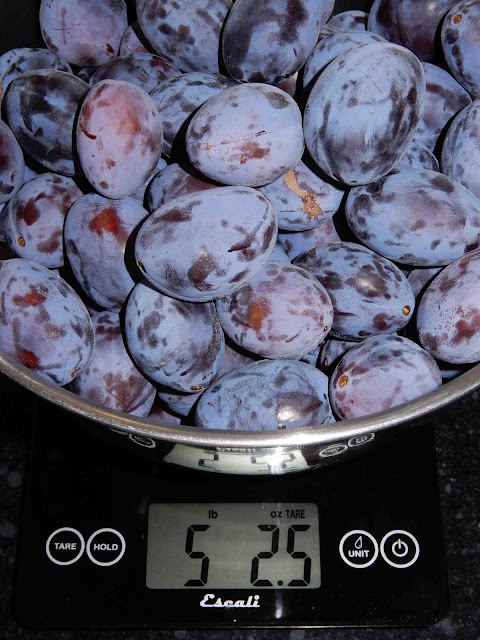 Plenty were stuffed into my mouth while I was there. Also, I noticed the kitties in the field by the side of the house. Sadie was stalking something. 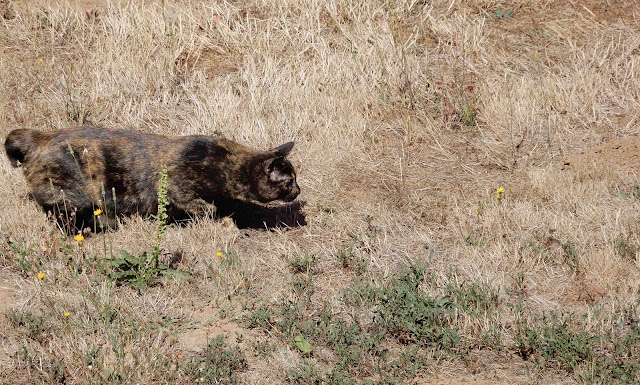 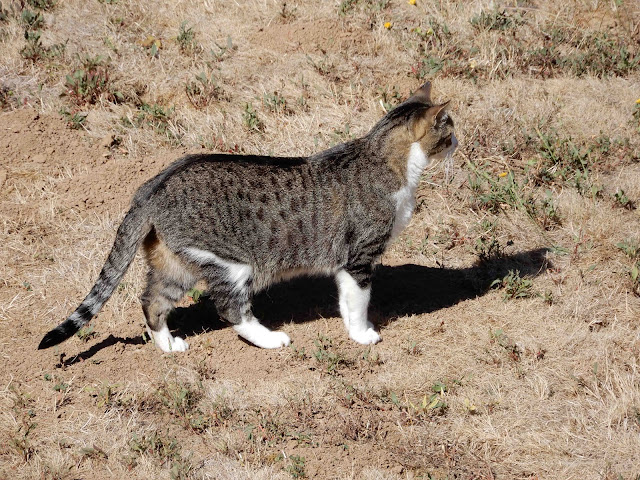 Shhhhhhh, Smitty...you're blowing my cover. And there's a gopher down in this hole, but my arms...aren't...quite...long....enough! A little help please! 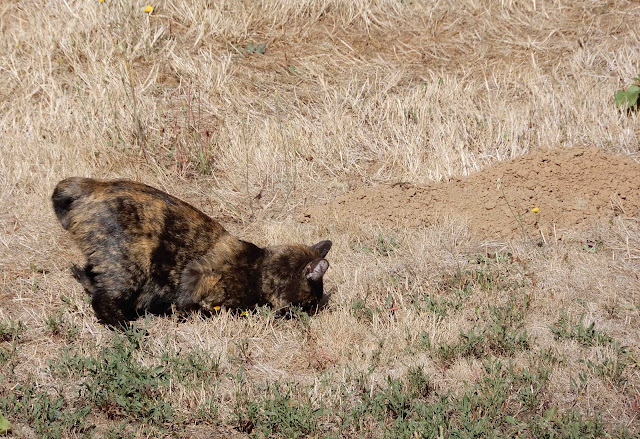 Back inside, it was time to bake the Original Plum Torte. This is such a simple and tasty recipe. It has a back story too, and I would encourage you to click on the link I've provided to read it. There are also several ways to adapt this recipe in whatever way fits your purpose or your supply of fruit. It's easy, though. You mix up the cake batter and then lay the halved plums on top. 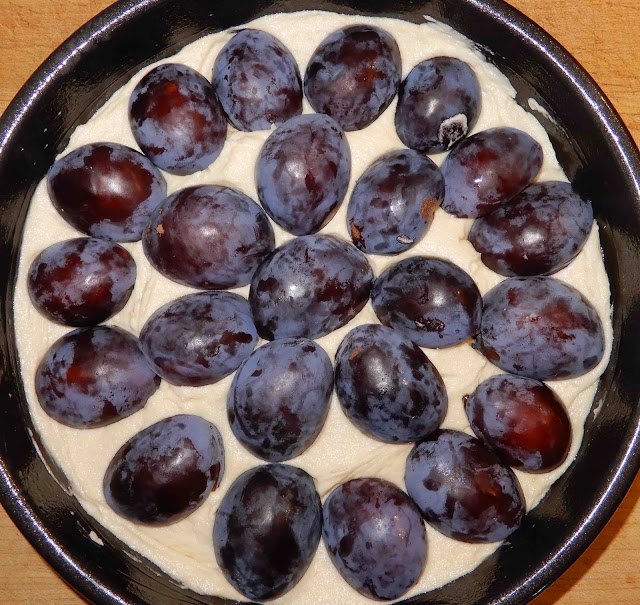 Sprinkle them with a little lemon juice, sugar, and cinnamon. 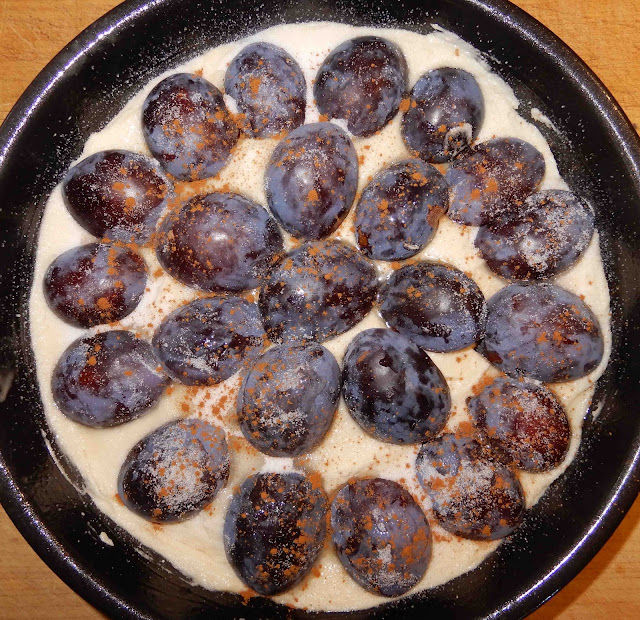 And then bake. So yummy. 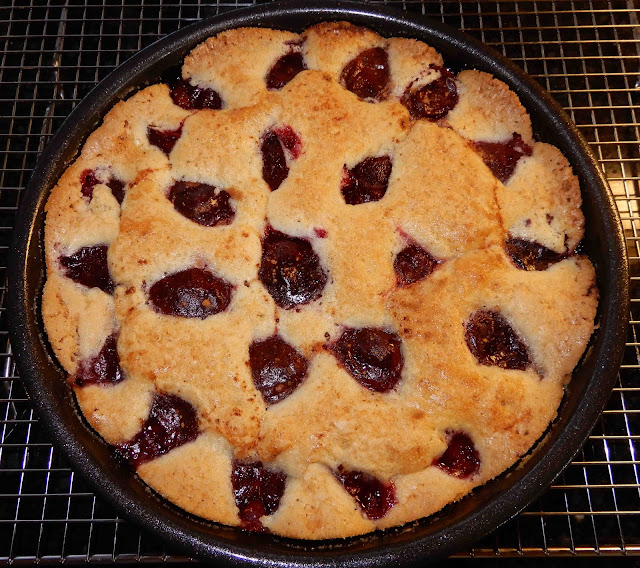 While that was baking, I had some time to finish up the Pumpkin Pie piece I've been working on. First, I needed to top-stitch the pumpkin leaves and stems, and then I added a narrow border to the top and bottom. 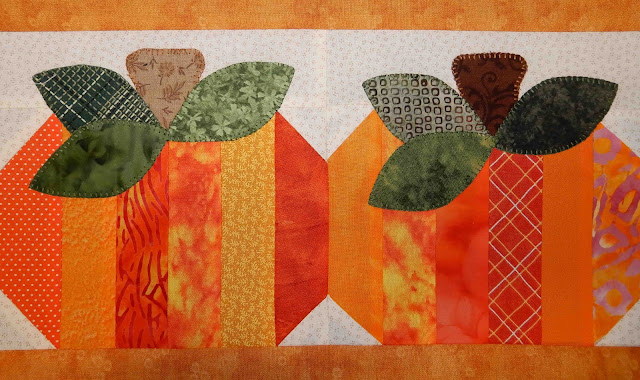 Then I sewed it to the embroidered piece and put borders all around. 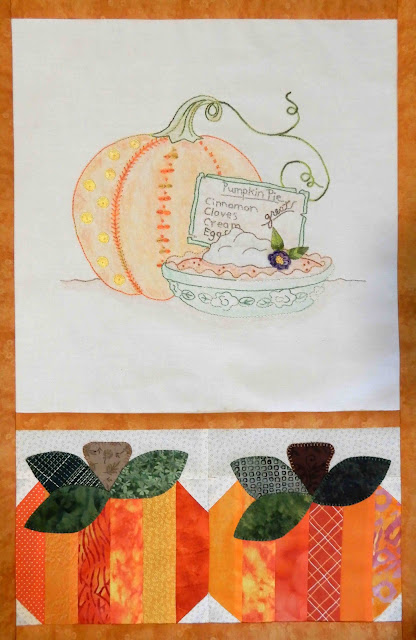 And then I added the batik border around the outside, and the top was finished. It ends up at 17 x 24 inches, which will fit on the small wall where I want to hang it. 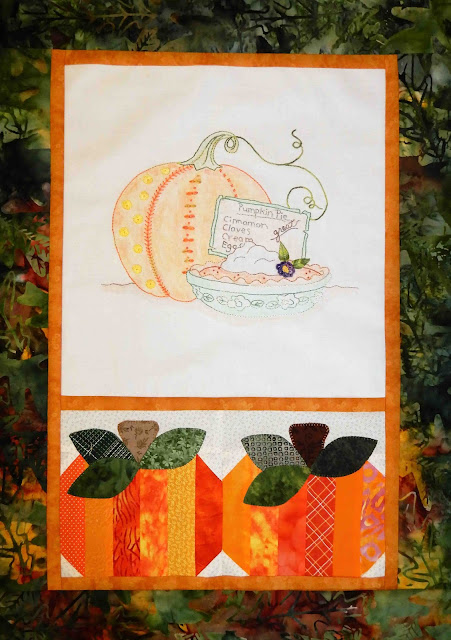 I'm using the same green leafy batik for the back, and so I cut that piece and also cut the binding strips from a leftover piece in my stash. 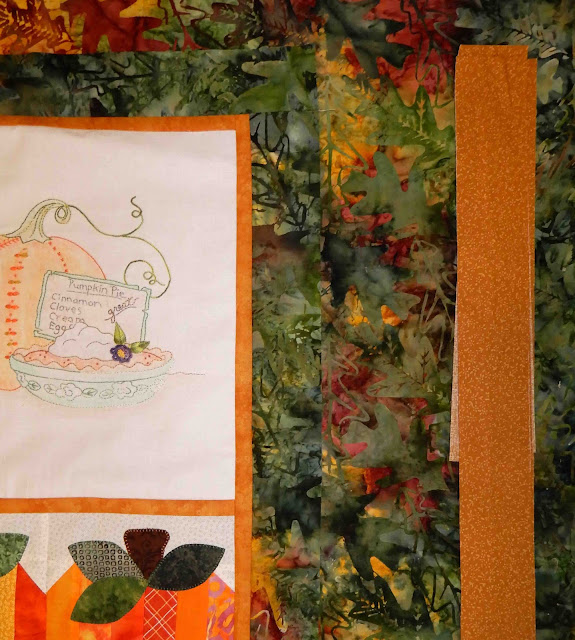 This probably won't get finished any time soon. I'm trying to catch up on quilts that were sandwiched over a year ago. Today I'll start quilting the Welcome Home mystery quilt which is my September OMG. 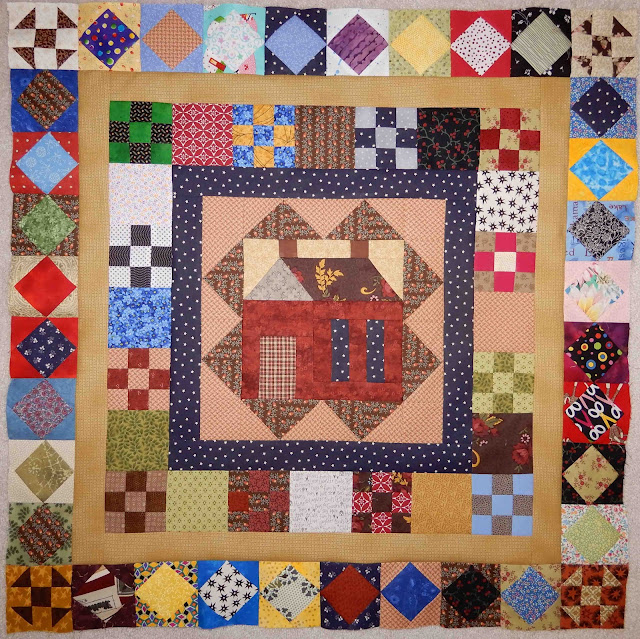 I haven't really given any thought to how to quilt this, but it will probably be some version of Angela Walters' Dot to Dot quilting technique. This quilt seems well-suited for it. It's going to be a kitty quilt when it's finished, and so it's a good one for practicing.

Also on today's agenda, I'll be turning those five pounds of plums from yesterday into barbecue sauce. I'm using this recipe from Food in Jars. Mine won't be as spicy. It was too spicy for us as written, and so I'll cut the cayenne and red pepper flakes in half this time around. Also, the original recipe used peaches. I've checked into the pH of plums vs. peaches, and the pH of plums is even lower than peaches. It should be safe to substitute one for the other. Also, the recipe has plenty of cider vinegar, and so it's plenty high in acid for water bath canning. My canning efforts are winding down for the season. Our farmers have promised me another 40 lbs. of tomatoes, hopefully this Saturday. Once I've finished with those, canning will be finished for the year. Unless I see something else, and then all bets are off.

First up today, I'll move my loaves of bread to their next stages, and then I'll do a little slow-stitching. Fall is in the air, and I'm so ready for it. How about you?
Posted by Barbara at 9:03 AM

You sute are busy! Pretty pumpkins.

i’m almost always craving for sweets after reading your blog, think I’ll try the plum torte one of these days. Maybe even make batter for two and see how it works as mini tortes, easier to serve at the bee? Love the pumpkin patchwork combined with the stitcherie, and love the adventures of your cats too.

That plum tart looks wonderful! Your pumpkin piece turned out just perfectly!! I like the dark greenish batik as the border. I really think this needs to be hanging by October 1. Or mailed to me in time for my birthday, October 10. You do you. {grin} Poor Sadie's really up to her chin trying to reach her prey, isn't she??? :)

Sure hope that gopher (or whatever) did not pull Sadie right in!

Your Plum Torte looks so deliciously inviting and I like the options you noted. Versatile recipes are important to have! However, I tried your link and couldn't access the recipe, unless I signed up with them. :( So I didn't! :( I just don't want any more mail

The plum torte looks really yummy and pretty easy to make. My Guy doesn't usually do the 3 day bread recipes, about 24 hours is as long as he'll mess with in terms of making bread. Those must be really, really tasty loaves. The Pumpkin Pie project turned out beautifully. Sorry it's too big to hang where you were planning. Hopefully you can find another good place to display it. Happy stitching (or canning) this weekend.

The NYT link must have expired for non-subscribers. Oh, well I'm sure it was a good read.

Sadie likes her dirt baths from the inner earth. I’m sure she fretted getting that varmint for a long, Long while. Easy entertainment for a cat.

We are finally having beautiful fall weather. It makes me want to bake bread, especially one of those loaves! And the plum torte, except I don't have a plum tree. Now I need to learn about PH balance in pits of fruit. That little pumpkin wall hanging is just perfect for this time of year. Glad you have it ready for hanging soon! Fun picture of Sadie on the hunt!