When I was at the hand applique class on Saturday, we discussed the use of Glad Press and Seal for marking patterns on fabric.

Some of you mentioned this method to me as an alternative to tracing paper when I first started quilting "We are the World", although no one was particularly enthusiastic about its advantages over paper. The biggest problem I'm having with paper is removing it after I've quilted through the design. It's a tedious process...one that requires tweezers and lots of patience. Initially, I couldn't see how Press and Seal was going to make it any easier, but after seeing Connie Sue's demonstration on Saturday, I decided I would try it on at least one block.

She correctly observed that the sheets want to curl up on the edges when they're removed from the roll. 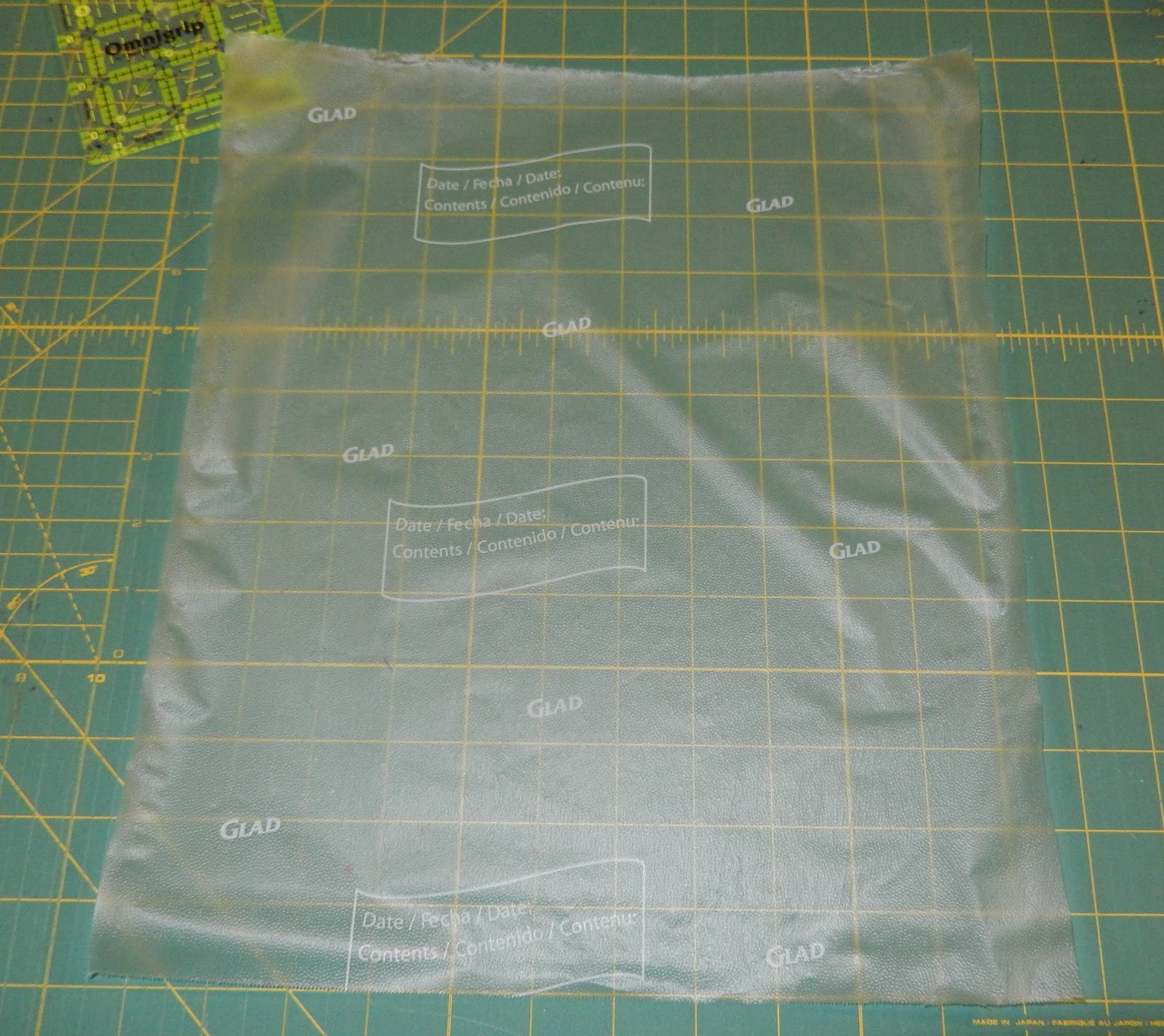 You can get them to lie flat by trimming off the edges with your rotary cutter. In my case, I found that I needed to trim a full inch off each side. 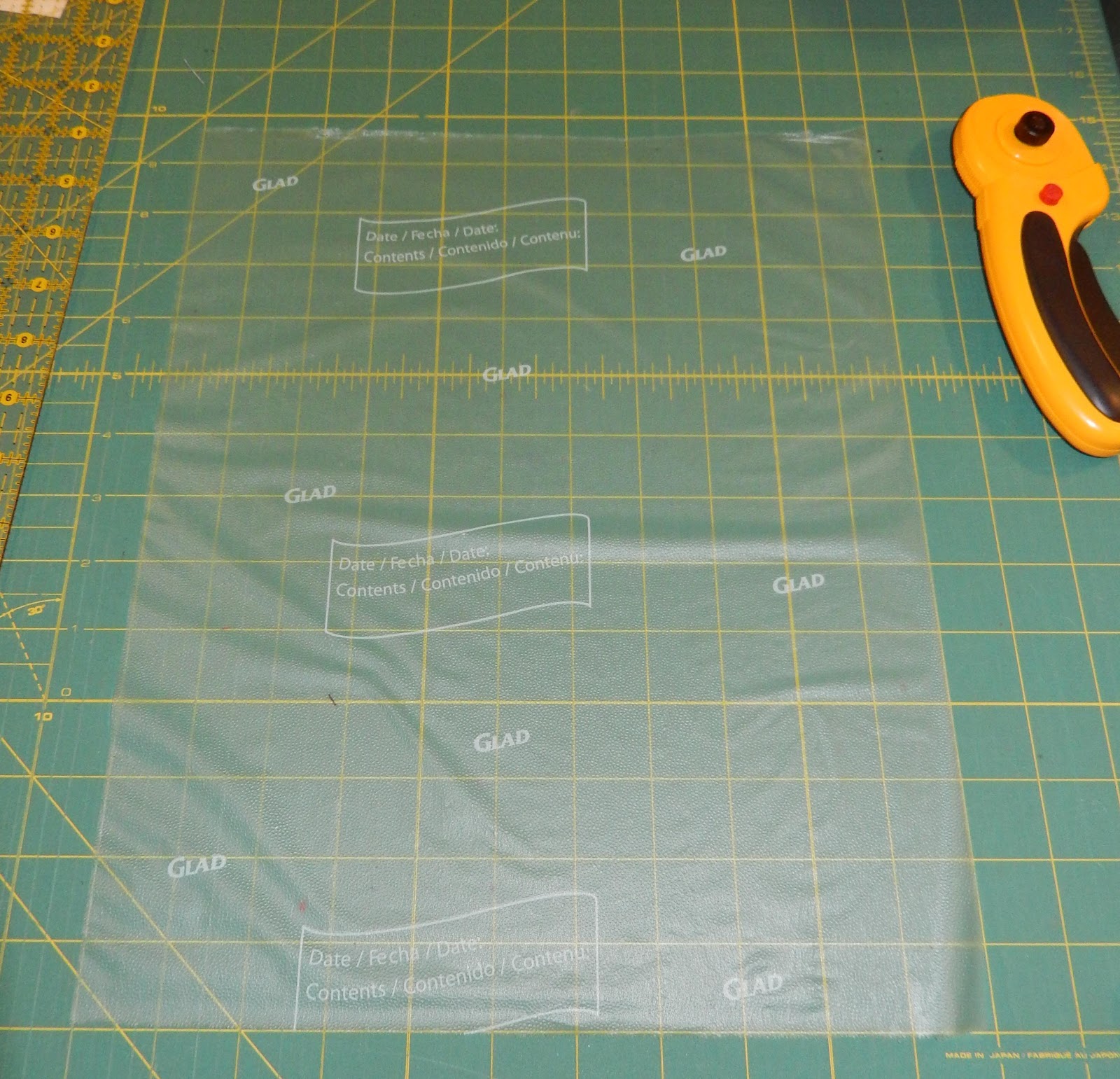 One of the reasons I was convinced to try this product was its ability to adhere to surfaces, while still being easily moved from surface to fabric, not to mention its ability to adhere to itself. My pattern is 12-1/2 inches square, and after trimming the edges, I needed to overlap two sheets to cover the whole thing. It adhered nicely to my table top, and also to itself without the use of pins or tape. 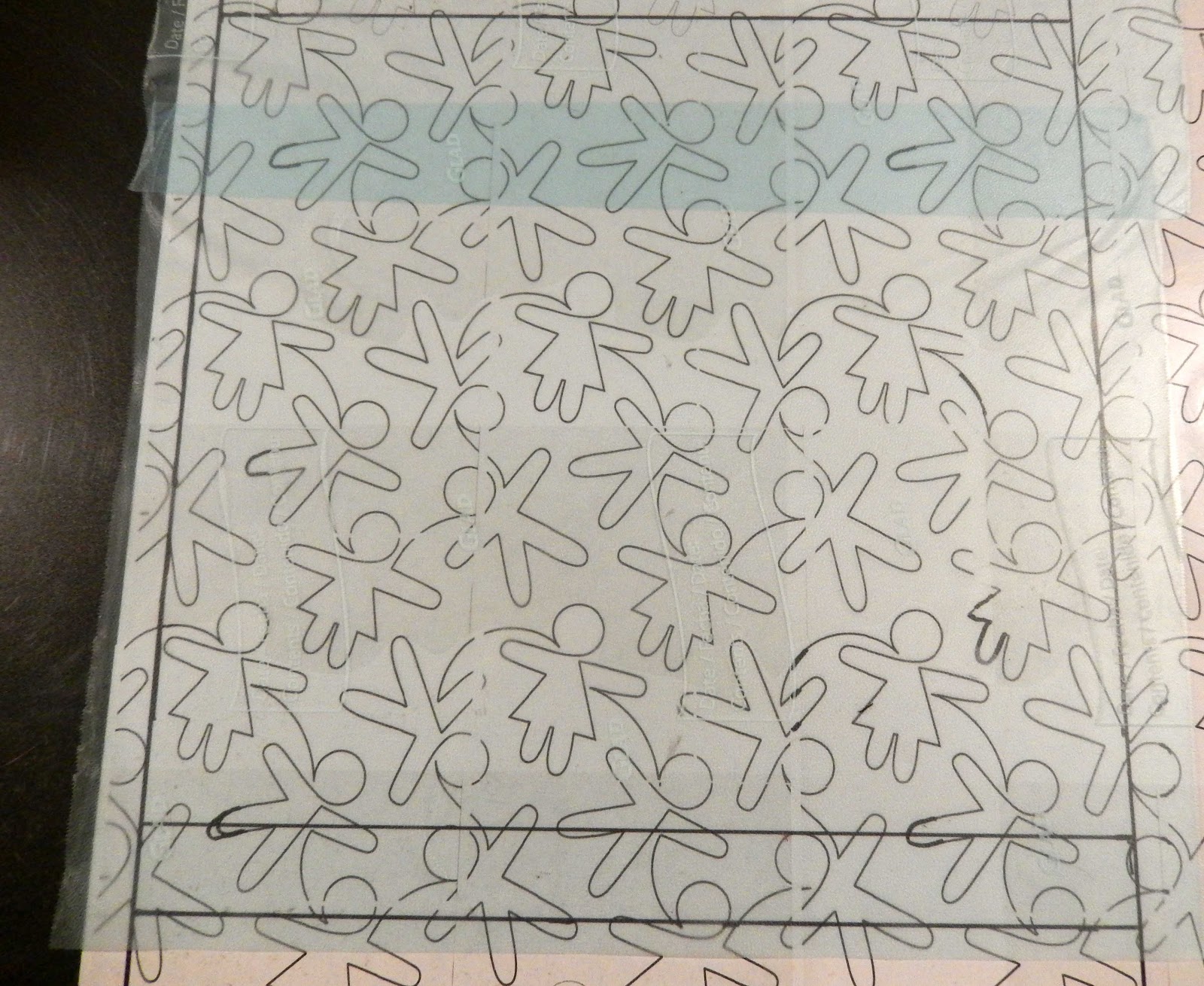 Next, I wondered how easy it would be to trace over it. I started out using a Pigma Graphic pen. Some of you are familiar with Pigma Micron pens which can be used to trace embroidery designs to fabric. I ended up with this "Graphic" pen by mistake. It has a thicker point than the "Micron" pens, but I have found other uses for it...tracing patterns onto paper being one of them. 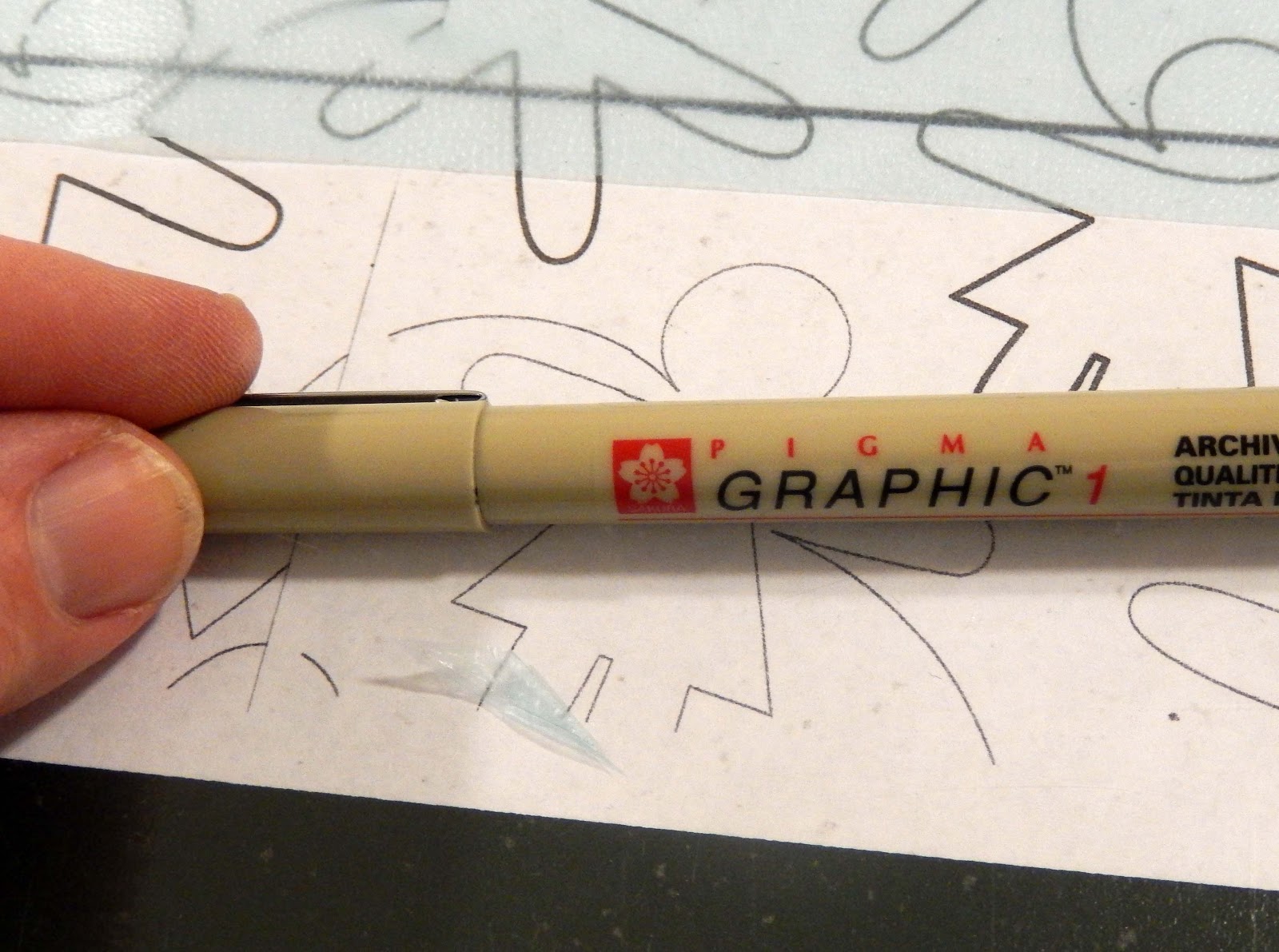 I was about halfway through the process of tracing my design when I realized the ink was not drying and was going to smear. 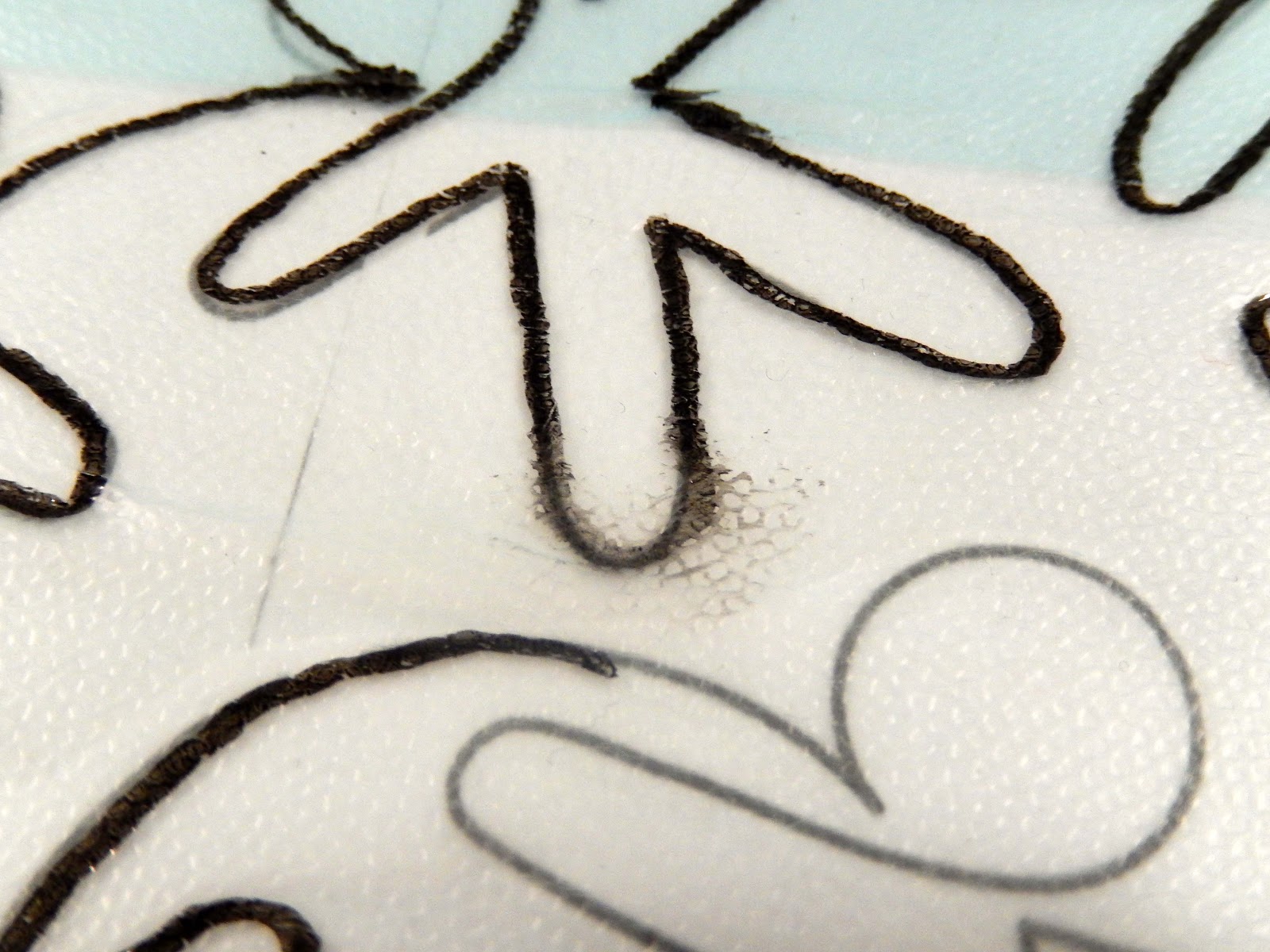 So, I started over again with ball point pen which worked equally well, although it was a little more difficult to see. Also, I traced in the edges of my design for ease of placement when I moved it to the fabric. 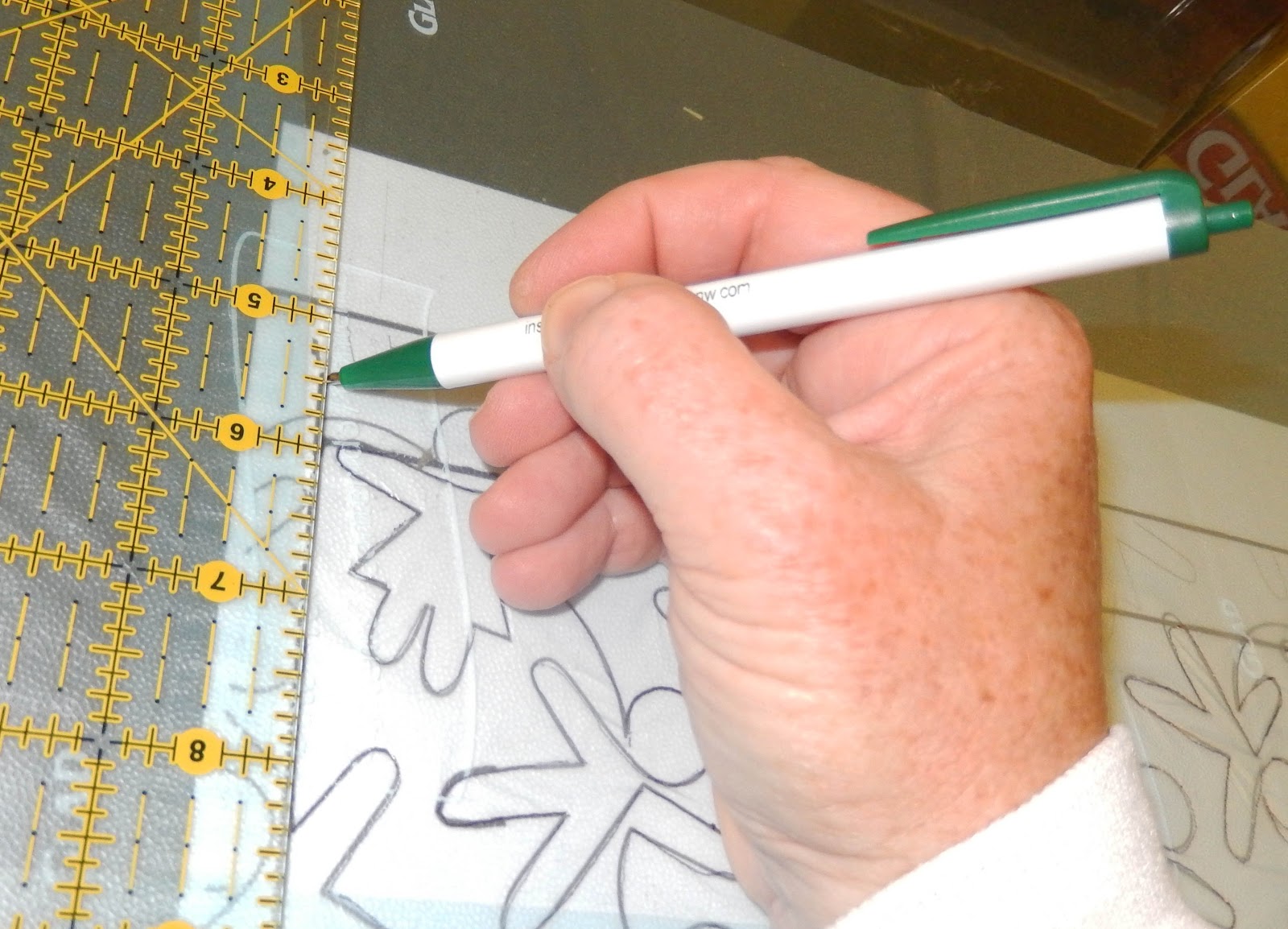 Then I wondered how easily I would be able to remove the sheet from the table, and whether the overlap would hold. It did. It peeled up easily, and I had no problems with the overlap. 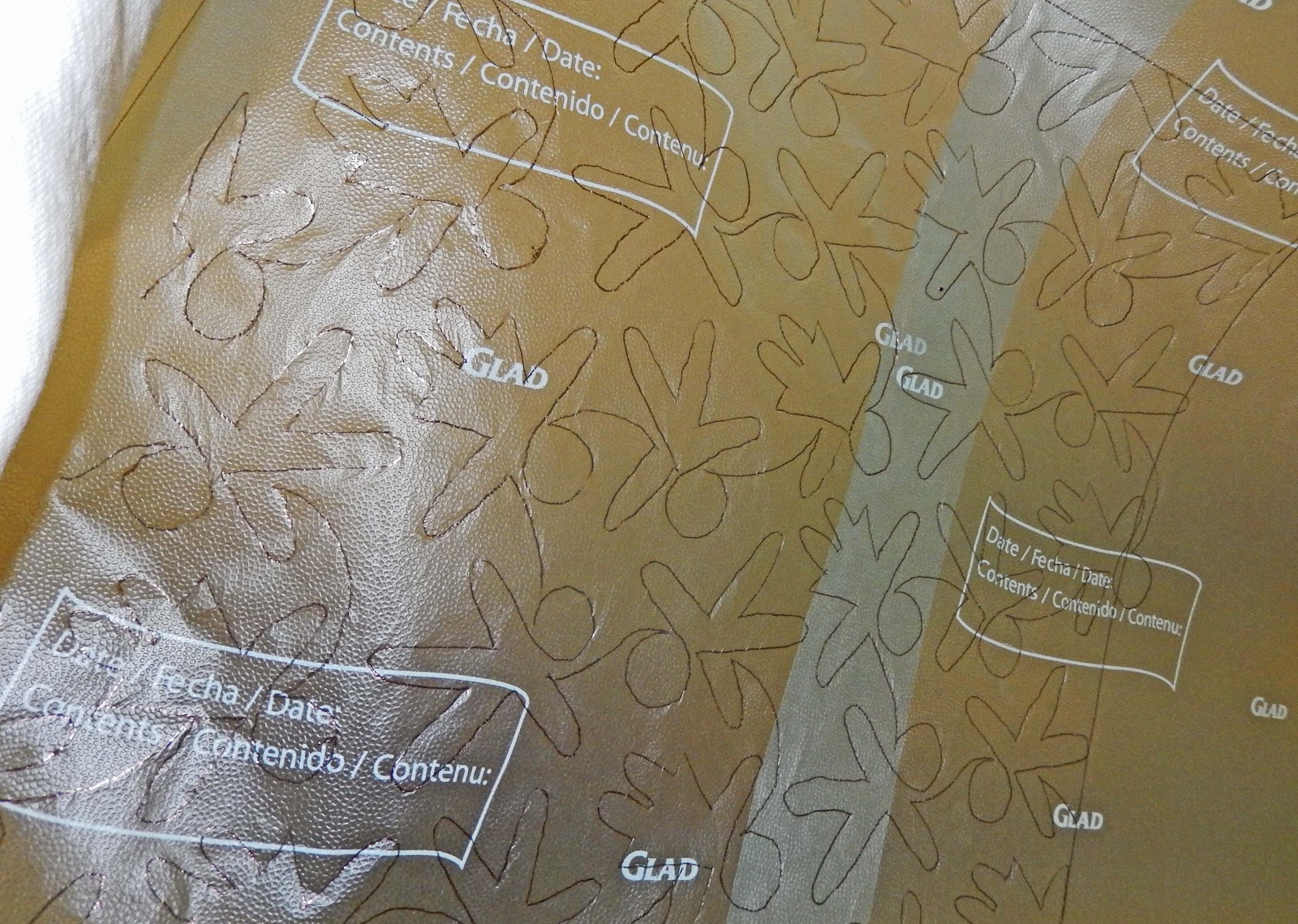 What I really loved about this product was its ability to adhere to the fabric without the use of pins. I'm always raking my hands over the pins, and so to be able to do this without pins will save my skin and my fabric. 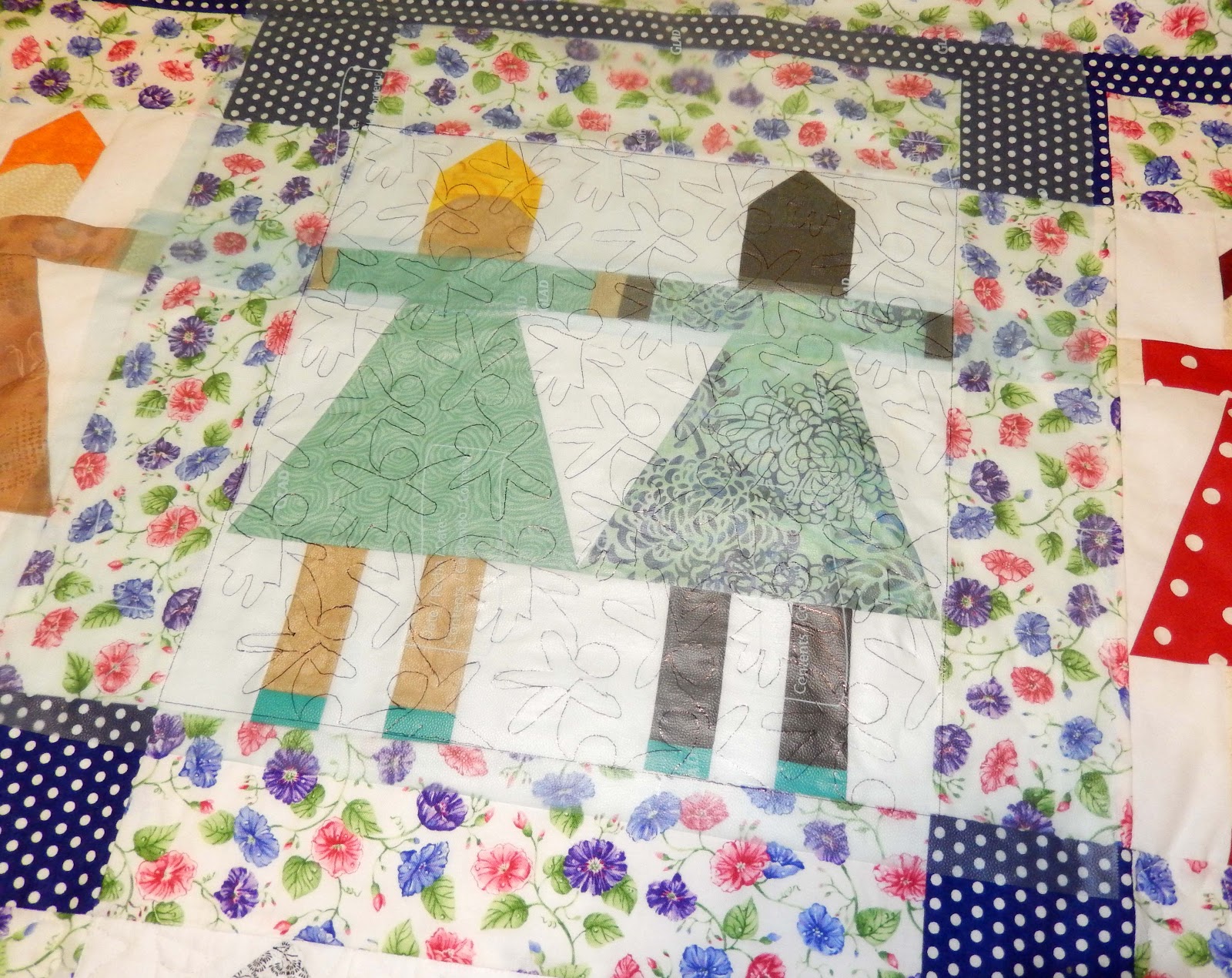 I was able to move this from my table to my sewing machine...even scrunching it up to fit it into the throat space with no problems. I did require that I smooth it out a bit before I started sewing, but here, it had a big advantage over paper.

The one problem I had quilting through it is that it is rather slick. Bare hands and even gloved hands cannot grip it, and so this was the first time I found an advantage to using the Gypsy Quilter Fabulous Fabric Guide that I purchased years ago. I started out with the smaller of the two hoops, but once I got used to the "feel" of using it, I switched to the larger hoop. You can read a review of the product on that link I've given you. It's a good product, but this is the first time I've found it to be an advantage over gloved hands. 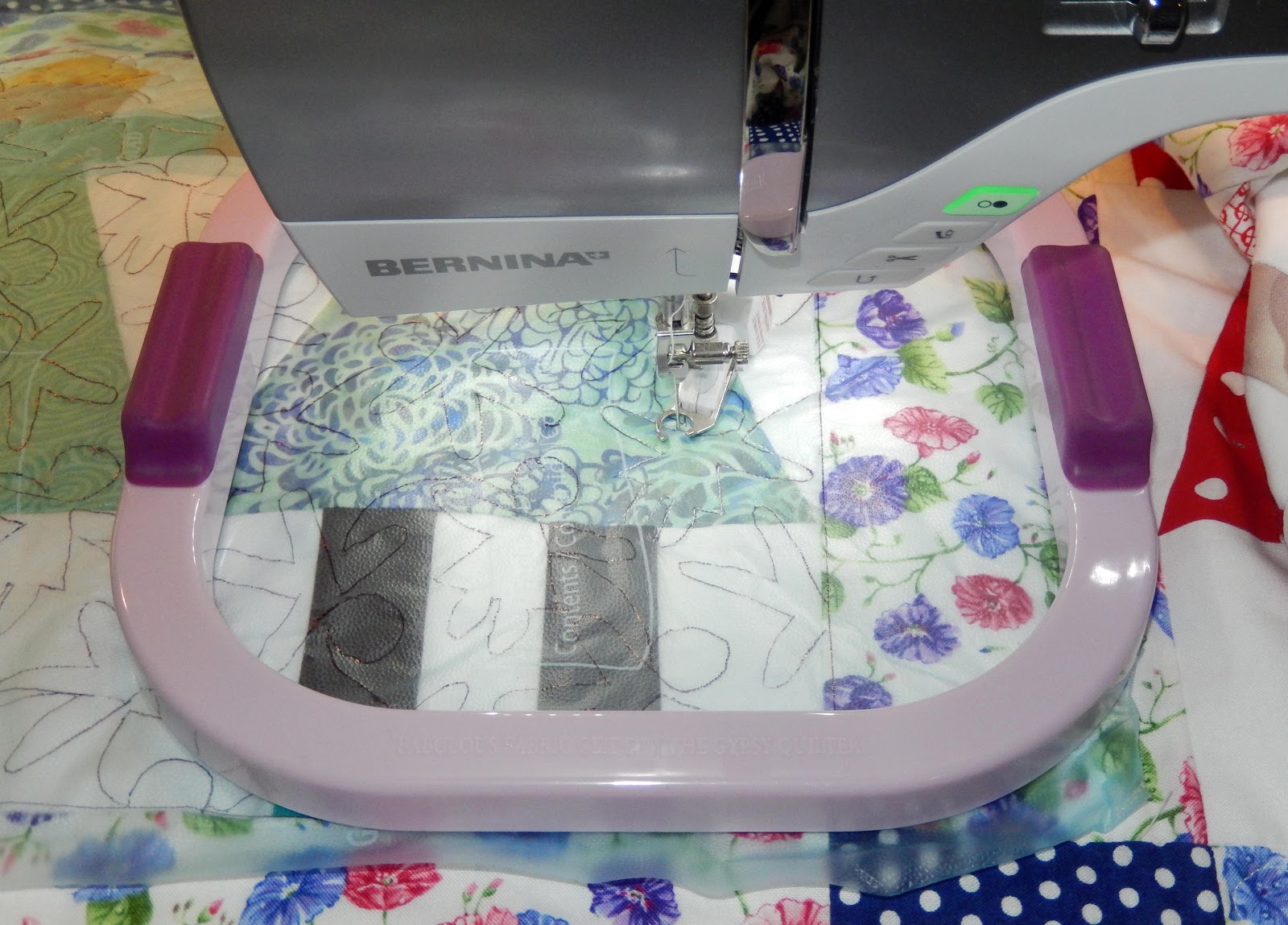 The Press and Seal was easy to quilt through, and I had no problems with it. It might have gummed up my needle a little, but nothing I couldn't easily clean away when I was finished with the block.

Next came the acid test. How would it stack up against paper when I tried to remove it? I had plenty of excess around the margins of my block that were not quilted, and that part tore away beautifully...as easily as perforated paper. While it was still tedious to remove, I felt it came off in larger pieces than the paper did. 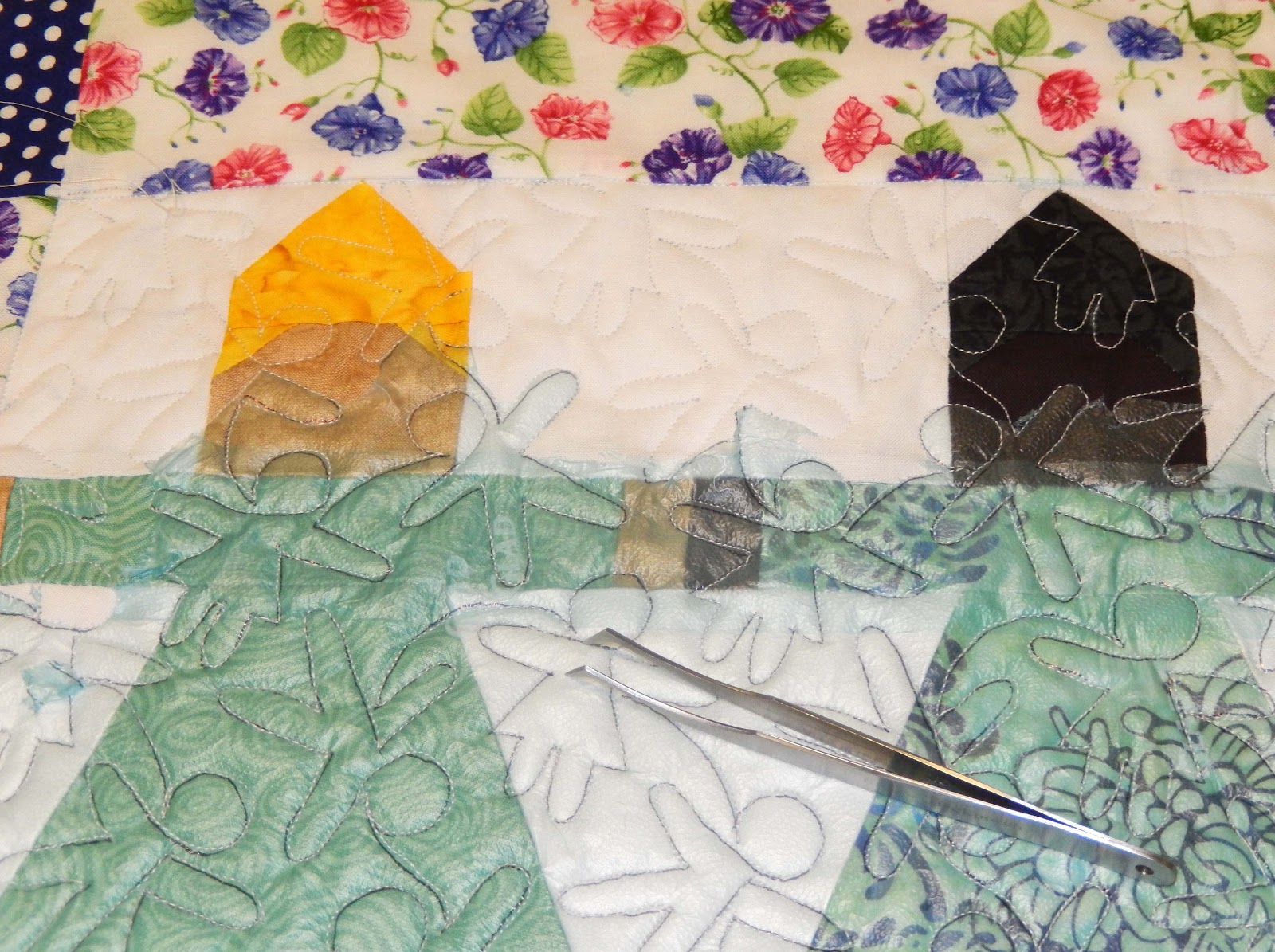 It still requires the use of tweezers, but I didn't find myself nearly as frustrated with it. I wouldn't say it saved me any time, but I still think it was easier to remove. One disadvantage is that it sticks to your fingers...the same reason it adheres so well to things and gums up your needle.

This was a minor disadvantage, and I found that briskly rubbing my hands together as if rubbing lotion into my skin removed it without leaving behind any residue. Also, it did not leave any residue on my fabric as far as I could tell. I was able to remove it more completely than the paper as well. I examined the block carefully when I was finished, and was able to easily spot anything left behind. Those little bits were easy enough to remove with my tweezers. 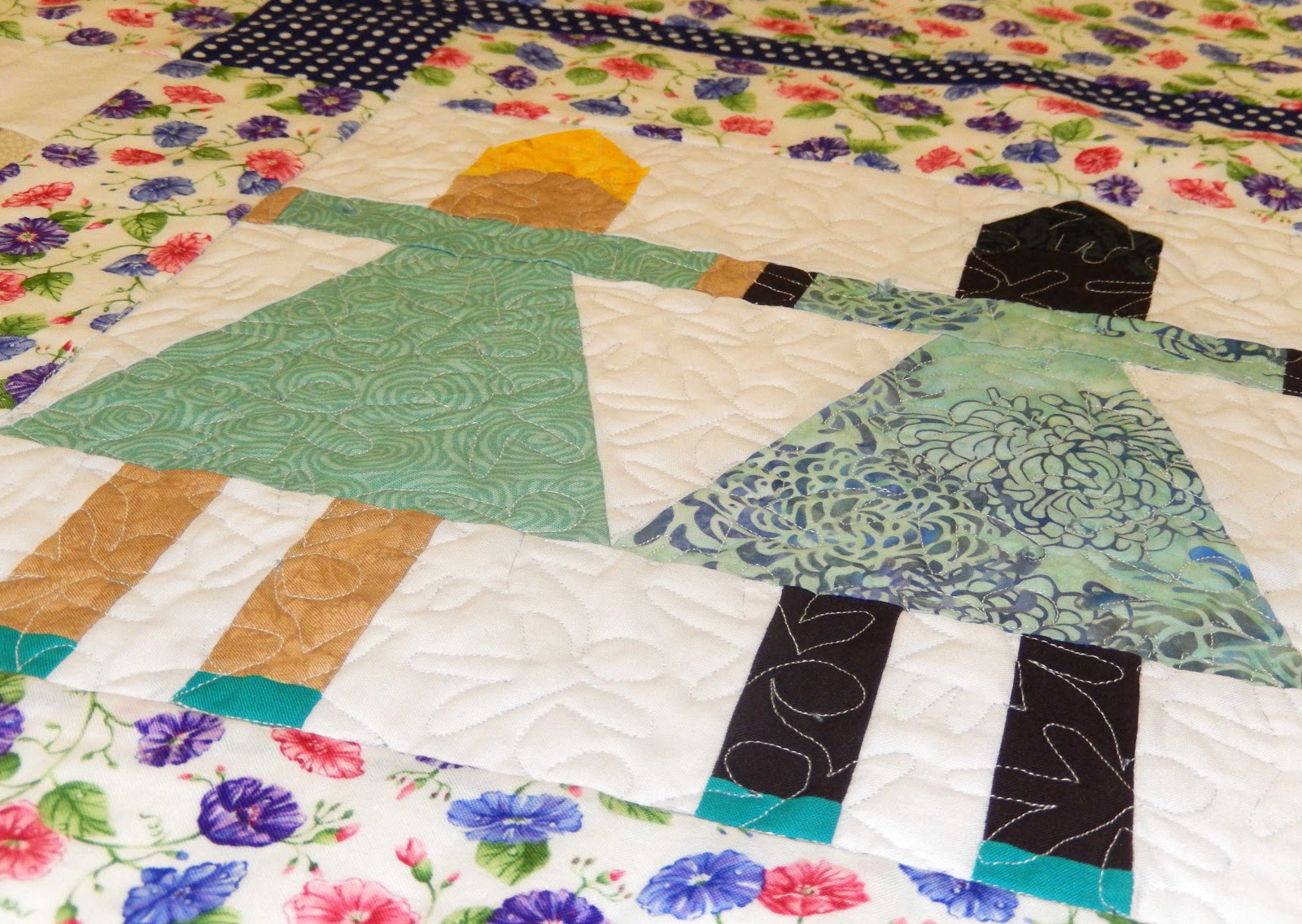 One disadvantage I can think of is that any little bits of paper left behind will dissolve and wash away when I wash the quilt...which I plan to do because there are little bits of paper left behind!! If I were to leave any little bits of Press and Seal behind, they would not wash away. They are plastic, and they will not dissolve. For that reason, I'll need to make sure I get all of it pulled away from around my stitches...easy enough, but a job that requires some care and careful examination.

So now that I've done one block this way, I've decided it has a definite advantage over paper. The one problem I had was that it was hard to remove in the area where I had overlapped the two sheets. I had about an inch and a half of overlap first time around. On this second try, I'm minimizing the overlap, and I think it will work better. 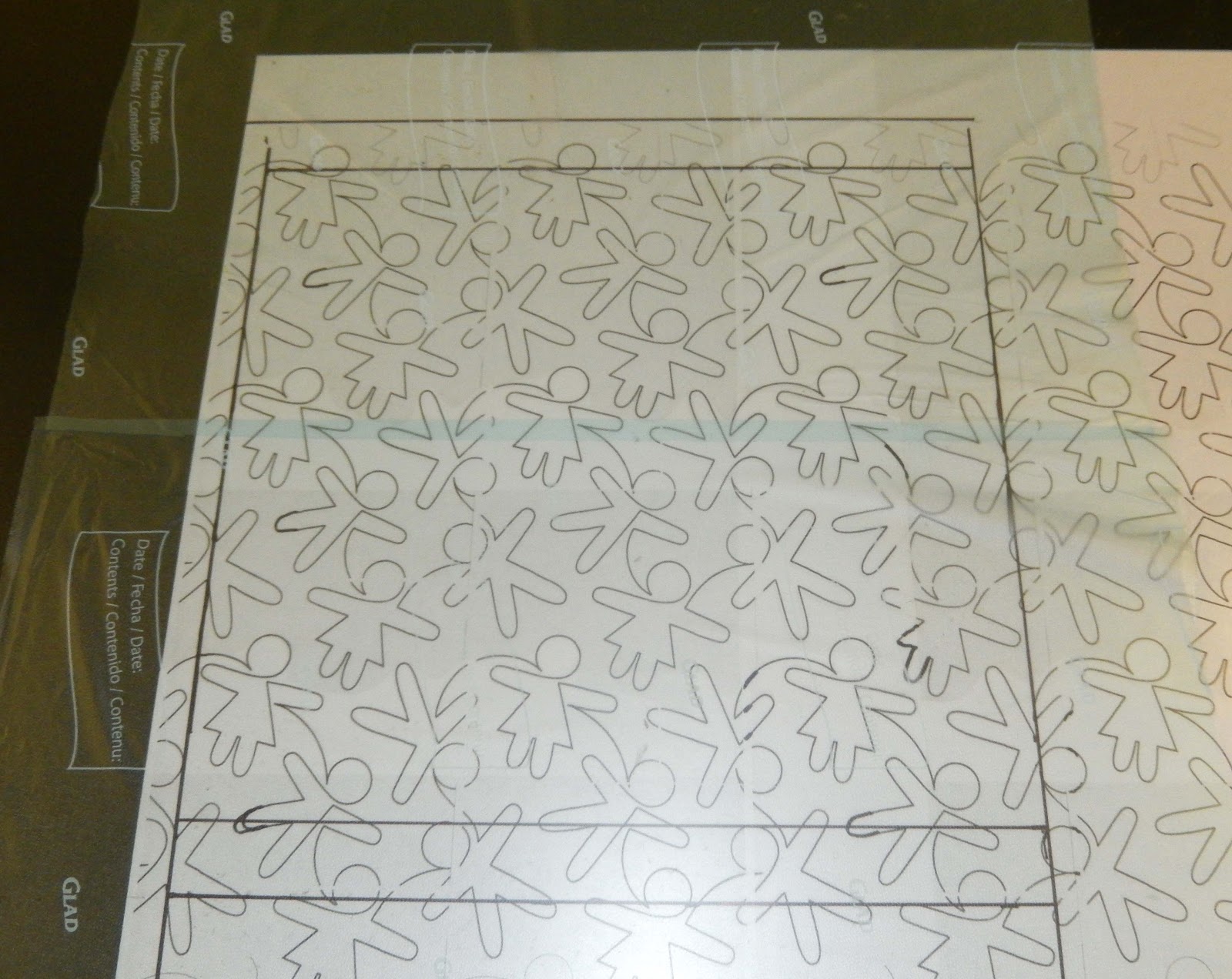 I'm happy with how this has worked, and I am obviously trying it again. I'll update you if any new problems reveal themselves down the road. I can't say that I recommend it over paper, but for my purposes on this one project, it does seem to ease the way a little bit. I think it would be up to each individual quilter to give it a try and see what you think. My quilt is rather densely quilted. Obviously, it would be easier to work with on a more open design.

So there you go. On with the quilting.
Posted by Barbara at 3:52 PM

Well that was pretty interesting, I so glad you did this step by step. I didn't realize it would stick to the fabric too. Putting that into the brain files for next time I need something like that, thanks.

I have seen this product on Pinterest and would really like to try it. Unfortunately we can not get this product in Australia.....it has not been approved for food use and so quilters have to suffer!
Cath

Awesome solution there Barbara. :) So love those dolls...

Thank you for sharing all this wonderful information. I can see it useful for borders and a little more open motif.

Interesting! Not available in OZ, so I shall have to bide my time before I get to try this.

It's amazing the variety of materials available that can be used as tools.

Now if they could just make it dissolve it would be perfect;) I love the idea of having something for a template, but I have no patience, to remove things.

Thanks for sharing what you learned and how it worked. I think I will try this on my new project! Another advantage is when you lay it over your fabric, you can see what's going to be under the quilting design, if you don't want a particular item quilted over.

I will have to try that, once my bir Bernina gets back. It got thread wrapped in the bobbin and I could not get it out. I could not even turn the hand wheel to rotate the bobbin case. Of course this happened on Saturday night on a holiday weekend. It will not be seen by the tech till June 11! Time to drag out the old reliable 200!

absolutely amazing!!! Thanks for sharing what you learned. I will have to buy some and try it. I love all the little dolls you are quilting. Very time consuming.

interesting, but seems like a hassle?? how about tranfering with washable or frixion pens?

This works on a long arm as well

Thanks for the information Barbara. I have a design I want to try and quilt and this sounds perfect plus I've just checked and it is available in the UK.

Thank you so much for such an informative post! I'm going to give this a whirl myself when I need some new quilting style I'm not too comfortable with.

I have used this on hand embroidery several times. I found it hard picking it out from the handmade stitches, without messing up my stitches. Otherwise I liked it, too.

Thanks for sharing your experiences with it!
Susie

Thanks for the step-by-step. My quilt teacher had talking about using Press & Seal for quilting, but I haven't ever tried it myself.

I believe I tried this once. Don't remember why I never tried it again but may give it another go at some time in the future. It's working nicely for you on that quilt. Great job.

I love the design you're using to quilt this piece! And I'm so glad you sorta demo'd the process with the press'n seal stuff. I've heard lots of folks talk about it, but never seen it. It may have emboldened me! :)

This is so interesting I had not heard of this method of quilting, and you design looks so very interesting!