It was so much fun in my sewing room today!  I've finished my must-finish quilts for the month, and now I can work on whatever I want to.  It's been a long time since I've spent time just making blocks and that's how I spent the day.  And let me tell you, I had a lot of help. 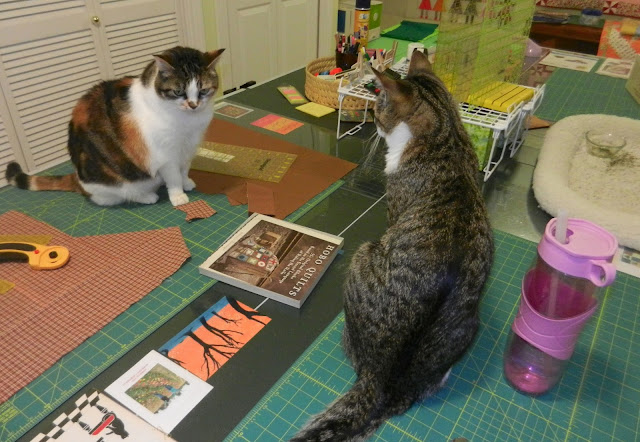 We had to pause here to take care of our kitty treat duties.  We do have our priorities, after all.

Before I started on the blocks, I machine stitched the binding onto the Plain and Simple Amish Sampler.  This is a large quilt, and so it will take me several days before I am able to finish the hand stitching.  Still, this is always the biggest part of binding for me, and so I feel as if I'm on the home stretch. 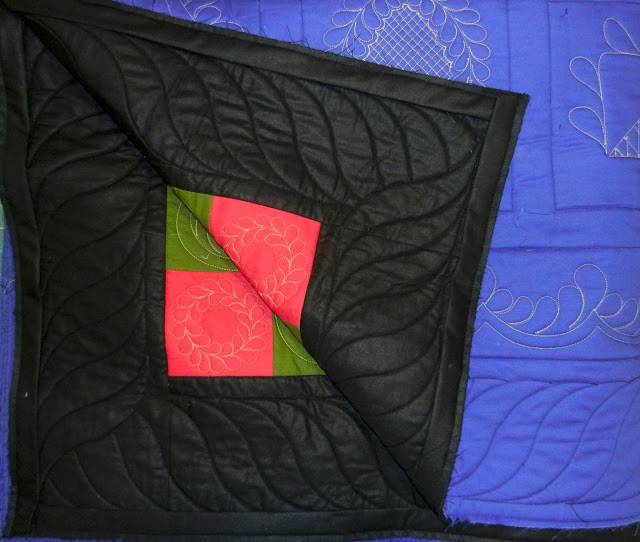 When the mid-month check-in party starts, I'll be linking this post to:

Once that was finished, I started working on blocks.  With so much applique in the past few weeks, I wanted to do some straight piecing.  I decided to work on my April NewFO quilt, which is one of the  Hobo Quilts from the book by Debra Henninger. 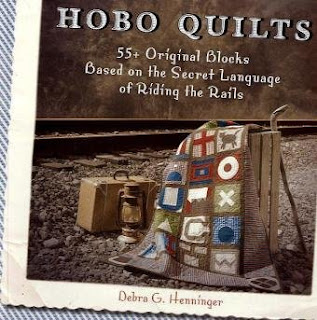 Today was the first time I'd really spent much time with the book, and it was quite delightful with its tales of the road.  The book consists of some quoted narrative from folks who lived during that time. To quote from the book:

"From the 1880's to the 1940's, hobos were a part of American life, with up to 250,000 travelers on the road at one time.  Some viewed the hobos as dirty, hard-drinking, untrustworthy bums.  Most saw them as honest, honorable people caught in extraordinary times.  . . . Hobo signs were their secret language:  They gave direction and advice to the savvy traveler including where to find food, water, a place to sleep and possibly work.  . . .  These signs tell the story of what it took to survive as a hobo.  Most importantly, this subculture was a significant part of American history that is worthy of remembrance."

There are instructions for 60 different quilt blocks and several different projects.  I've seen one of the projects in this book at the Stitches in Bloom quilt show in 2012 called "Ridin' the Rails".  I imagine that's when I got interested in the book.  Here is the project someone else did: 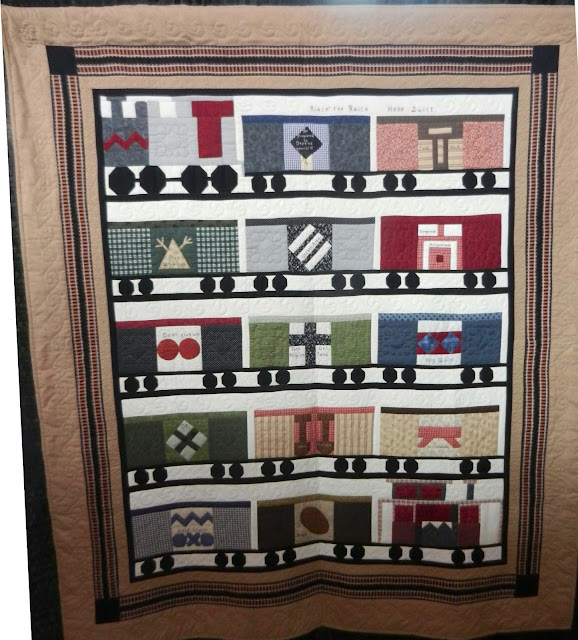 My apologies to the quilter.  I don't know her name. 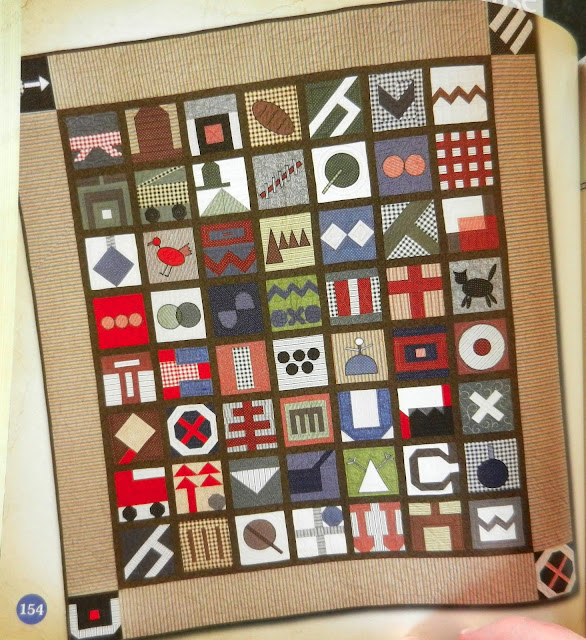 With 60 blocks to make, I decided to set as my goal to complete five blocks each time I work on it, and that is what I did today.  Here are the five blocks I have so far, along with their names:

A Beating Awaits You Here 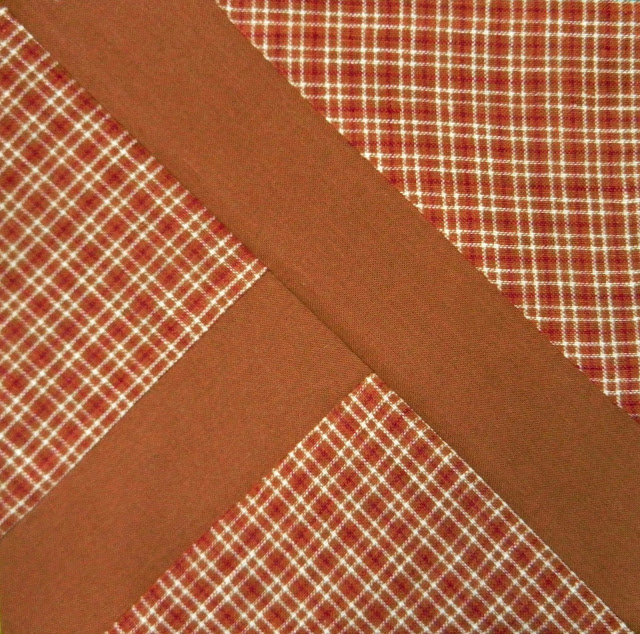 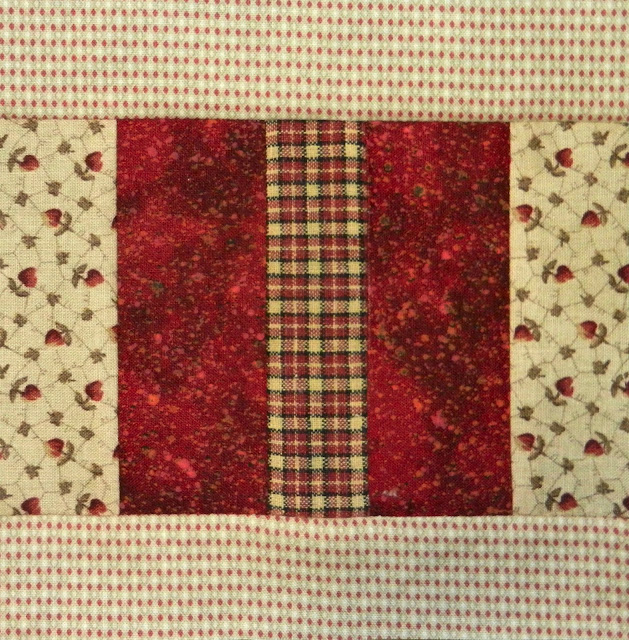 At the Crossroad, Go this Way

"...on the main lines across the country when one train met one going the other way, there would be thirty to forty transients on each train, each going to where they hoped the work would be.  They would yell back and forth asking where the work was."  ~Lyle A. O'Hare, Texas 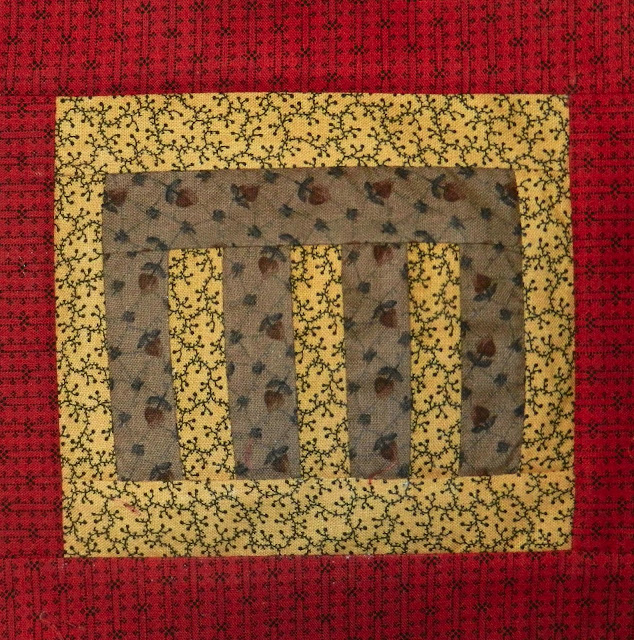 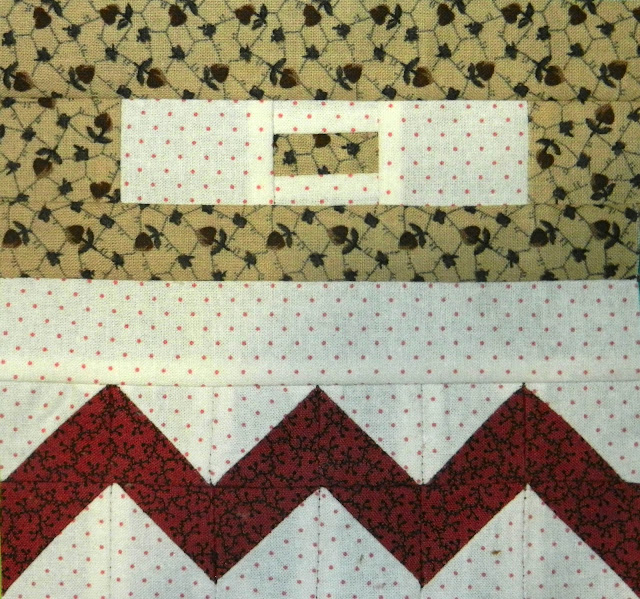 Sadly, I'm going to have to remake this one.  The tan strips at the top and in the middle are 1/4 inch too narrow, and that is a mistake in the book.  I'm loving the book, but I'm obviously going to have to pay close attention to the measurements and add them up to make sure they make sense.  The blocks (unfinished) should be 6 1/2 inches.  It's disconcerting to find an error so close to the beginning of the project, but it will be easy enough to fix.

Beside each block title in the book, there is the actual symbol that one might see, hand-written notations resembling hieroglyphics.  The book is really quite fascinating.  I love that we can learn history from quilts.

So that was my day of quilting.  With these five done, I'll move onto something else.  Tomorrow, I think I might start on the Hello Moon BOM.  I've been wanting to start that one ever since I discovered it.  I have four blocks to make to catch up.

Also today, finally, finally I received the last block for the Vintage Miniature Sewing Machines BOM.  I've been waiting for this block for almost two months, which was annoying to say the least.  I'll say more about it when I'm ready to start on it.  First, I have to finish the stitchery I'm working on for the Gardener's Journal quilt.

My Monday was great.  How about you?
Posted by Barbara at 7:53 PM

That book sounds very interesting, I'd love to read it! We called them swaggies (short for swagmen) here, or sometimes hobos.

You have been busy for sure. Glad you have time for free sewing....:) Lovely quilts and blocks.

THat is an interesting book. I know you will make wonderful blocks!

They are unusual blocks. It is nice sewing with little friends.

Oh boy, a new project. Don't you get excited about starting a new one? I'm contemplating purchasing a Judy Niemeyer pattern after seeing samples of her designs by one of her reps last night. The only thing that saved me from buying one of the patterns was that I didn't have enough cash and she couldn't take a debit card. Saved again but that doesn't mean I won't buy one.

How lovely to have kitty helpers--aren't they the best? I have a cat tree in my workroom for my fur babies to hang out with me while I'm creating :-)

I absolutely LOVE the hobo quilts! What a fascinating topic--I never knew about the signs before, and that piece of history is such an interesting narrative on the hard times of that period. I'm looking forward to seeing more of your blocks!

Interesting book,you blocks look great. And yes I find I have to check cutting math as I have been disappointed a few times with errors also.

That is so cool! Interesting to learn about, and looking forward to seeing your blocks as you progress... Hugs!

I love the Hobo Quilt! Reminds me of the movie "Kit Kittredge, An American Girl". I took my Grandmother to see it, because the commercials reminded her of when she was a girl. She will be 97 at the end of May. I liked all the little signs they used to communicate. I especially liked the cat symbol for "kind hearted" to indicate where nice people lived who would help them out. Can't wait to see your blocks!

Really cool quilt-i look forward to seeing you progress thru it.

Arm full of Burp-pls ignore typos and lack of upper case; thanks.

Another fun project. I'm hoping to start this month's NewFO on Friday, which I will have all to myself for stitching.

As I was scrolling down your Hobo blocks, I thought to myself: "I wonder if the book tells what each sign means?". And the very next scroll you answered me! I hope you don't come across any more measurement errors.

What wonderful blocks. I'm going to have to look for the book just to read the stories! I love the train quilt.

How interesting! I never thought about symbols to help them, but it makes sense.

Might have to get the book. I knew about signs, but not what they were. When I was a child my mom fed two hobos on the porch and said later, "They will mark our house and others will follow." We were about three blocks from the RR and I don't think they came that far very often.

Followed your link to this post. This is a fascinating concept for a quilt. I'm going to cross my fingers Amazon has it, and put this book on my wish list. I love quilt books that include a bit of history. I've been looking for a pattern to make a quilt for my brother. Something like this would be perfect! Your site is a constant inspiration, Barbara!