It's an unexpected sunny morning at the Three Cats Ranch. I'm writing fast, and then making breakfast fast, and then getting out for a walk...fast...because at this time of year, the only sure weather-related thing is that the weather will change. We're expecting rain and snow this week, and so this bit of blue sky and sunshine is unexpected.

Yesterday I spent the afternoon in the sewing room. I was surprised to be able to get both Whimsical Garden quilt blocks ready for top-stitching. Smitty was disappointed to learn we wouldn't be doing much machine sewing. He bowed his head in disappointment, but I was unmoved. Even the grim ripper behind him seems sad about this. 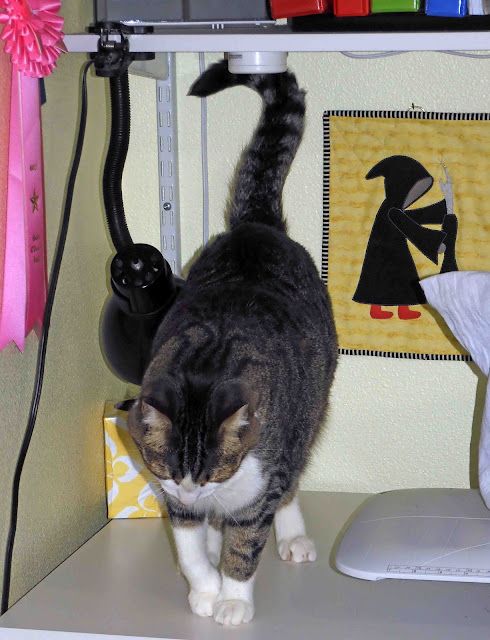 But no...I was determined to do fusing, and I was able to finish the first block for this new project. I wanted something bright and colorful, and this will do, most definitely. 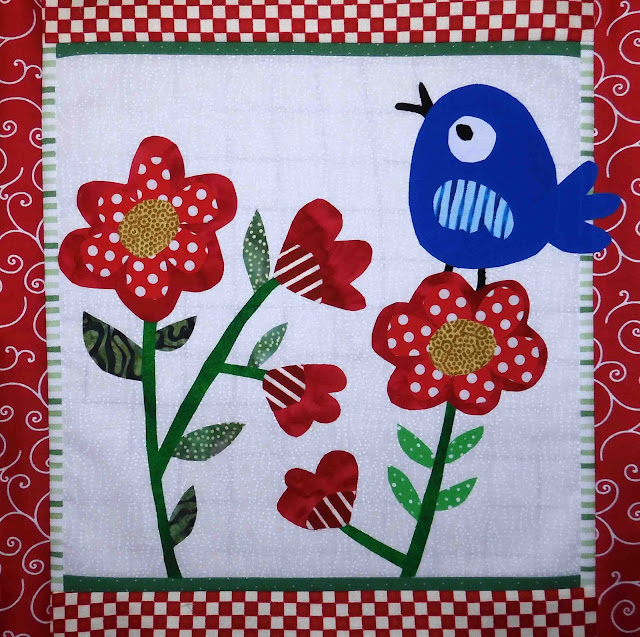 The placement was a little tricky on this one. There are lots of pieces tucked under other pieces, and so I was glad I had a wax paper placement template to help me out.
It was time for a break, and so I headed upstairs for a bit before returning to work on the second block. I needed to make a wax paper template first, and then I flipped it over to make the applique pieces. 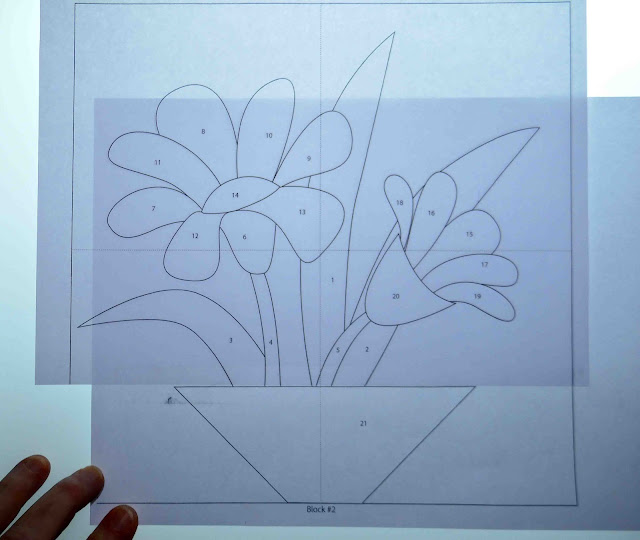 Smitty was over his disappointment by then, and he helped me with the tracing. By helping, I mean that he bumped my tracing hand with his nose several times to ensure my lines wouldn't be too straight. He's very creative in that way. 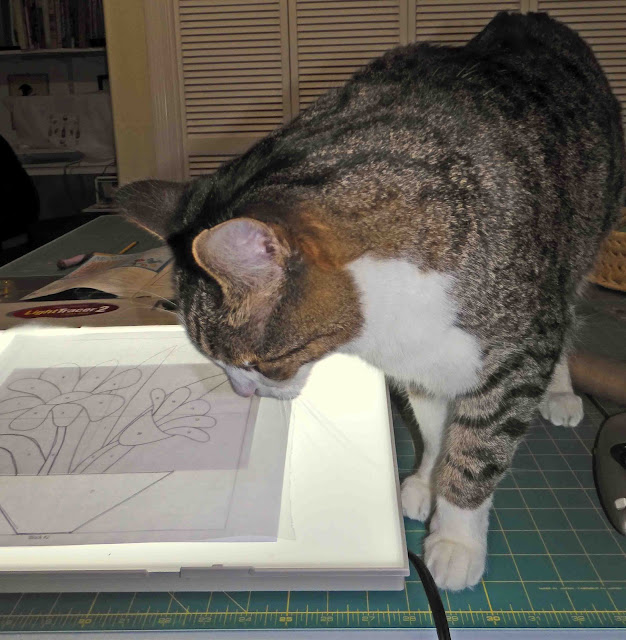 This one went quite a bit faster than the first, but it still needed it's sashings. 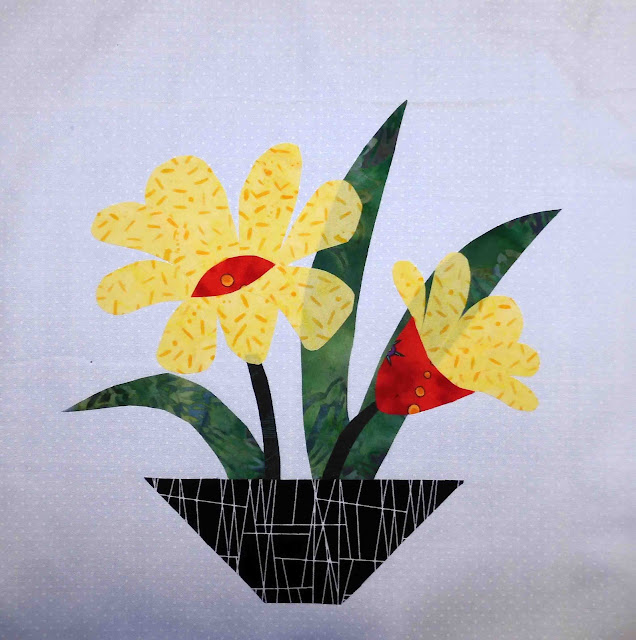 That was the only machine sewing I did yesterday. 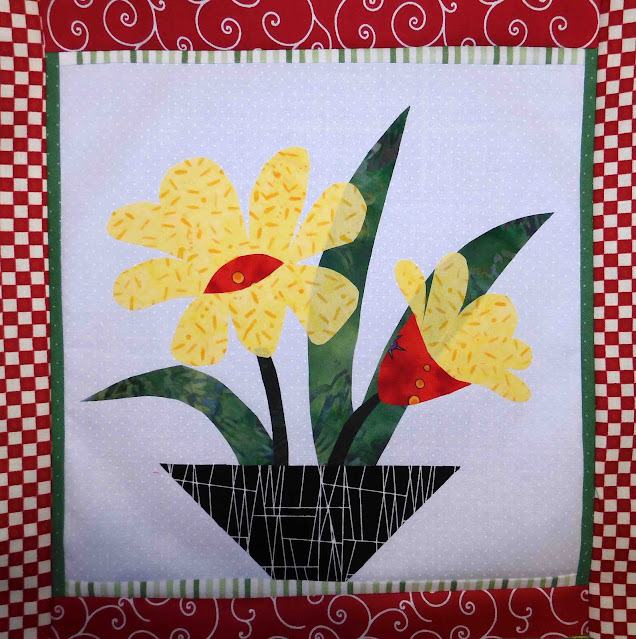 Here are the two blocks together. They still need top-stitching. As I mentioned in yesterday's post, I'm alternating the sashing fabrics on the tops, bottoms, and sides for visual interest. Now that I have a picture, it should make more sense. 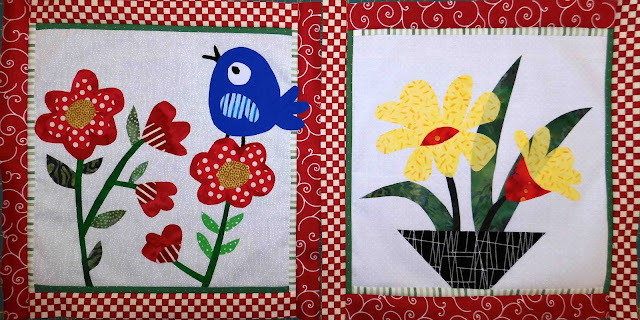 Also in yesterday's post, I mentioned that I didn't have enough of any one white to do all 20 block backgrounds. However, I have two fabrics that are nearly identical. In the two images below, I've taken a close-up so you can see the difference. I'll do all the odd-numbered block backgrounds with this one fabric... 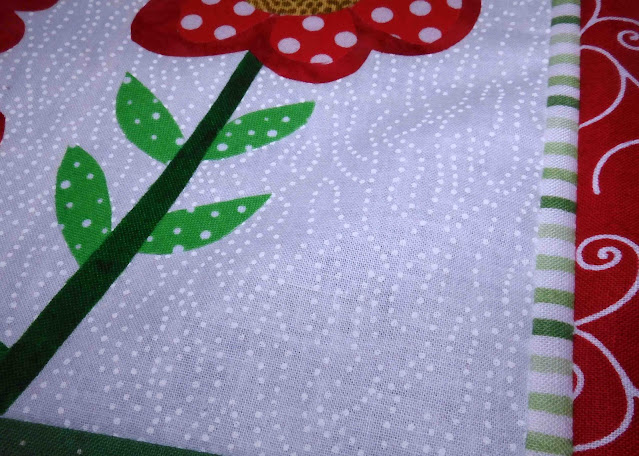 and the even-numbered block backgrounds with the one below. Standing back a distance, it's hard to see the difference. 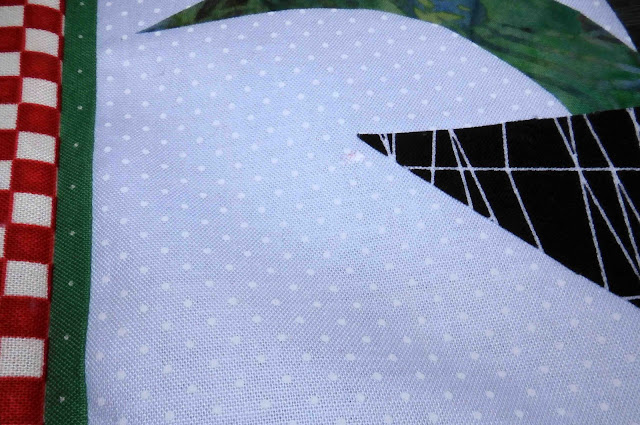 The only other thing of note from yesterday is that my quilting fairy godmother paid me a visit. She read my posts about snipping the rag quilt I finished recently, and she sent me these wonderful Gingher snips. These are actually my favorite snips to keep beside me when I'm sewing. 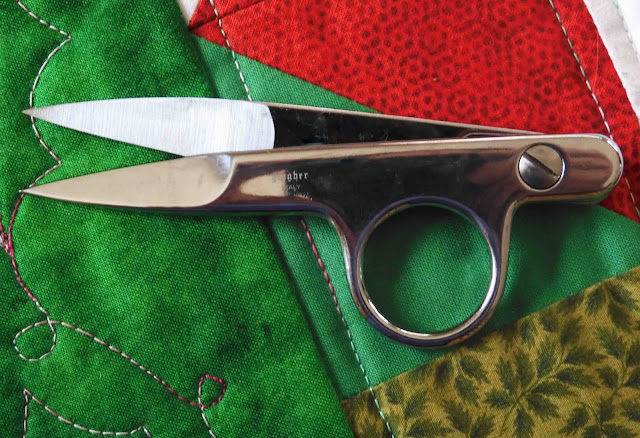 My mother gave me a pair when I was a teenager, and I hate to even think about the number of years that have passed since then. Over the decades, they've become dull, and it usually takes me a couple of snips at my threads before they'll cut through. So, I needed a new pair, and I'll be appreciative to be using scissors that actually do the job they were hired to do. Thank you, Ila. These will be used every time I sew.
So, as I mentioned, I'm going to get out early for a walk. It's cold, but the sun is shining. A sunny day is not to be wasted at this time of year in the Pacific Northwest. Later this afternoon, I'll get back to my quilt blocks. All that's left to do is the top-stitching, and that will take some time.
Probably tomorrow I'll get started on my next challenge piece, "Portrait." I know what I'm going to do, and I've been in the prepping stages. By that, I mean I've printed a photograph I'll be using. Here's the only peek I can give you for now. 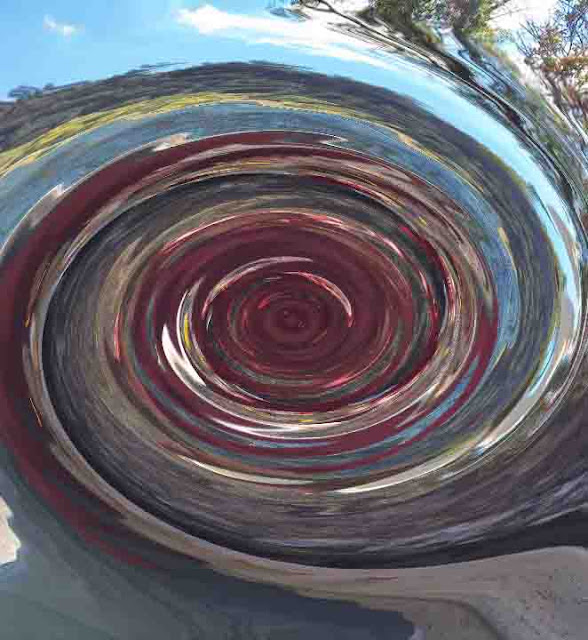 I know...cruel. Believe me. It hurts me at least as much as it hurts you. And while I'm doing my secret sewing, I'll be taking breaks by quilting the Trashy Triangles quilt. 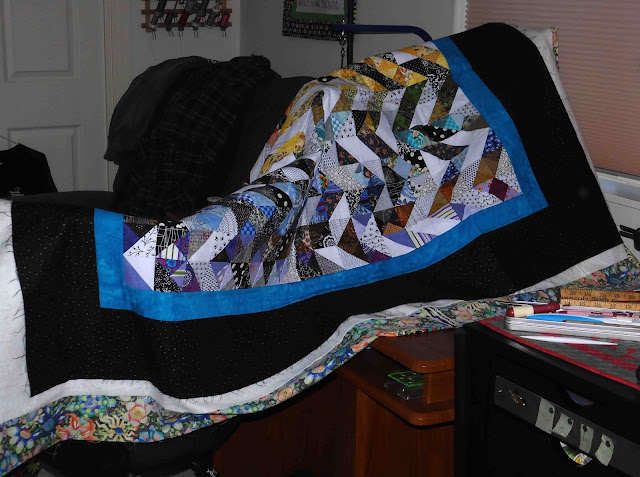 It's been waiting a long time for its turn under my needle, and now it's at the top of the stack.
Posted by Barbara at 8:21 AM

The whole point is to live life and be - to use all the colors in the crayon box. ~ RuPaul

It's taken me a long time to do just that. Live life and be.
Also how to say "no".
Sitting and sewing is my happy place. I don't feel guilty.

Those are adorable blocks. You've chosen colors so well. We have a gorgeous sunny day here too and expect snow tomorrow. But since we desperately need moisture I'm not unhappy about that forecast. I just hope it doesn't pass us by. We need a normal winter.

I see that your snips have a screw to hold them together. A person who does scissor sharpening could sharpen them. I have several pair of scissors that I have had sharpened and it gives them new life. As long as they have a screw to take them apart and then back together, they can be sharpened. The ones that can't be sharpened are the cheap scissors that are put together with a rivet and don't come apart. That way you could have 2 pairs of sharp snips!
I love my spring loaded snips. Much better than scissors for snipping thread tails.

That's a pair of lovely bright and cheerful blocks you are making, I'm looking forward to seeing this one evolve.

Oh, I didn't know Gingher made snips like that You're feeding my scissor obsession, you know. Wilbs has been especially helpful lately too - must be the season? I'm liking those cheerful blocks! 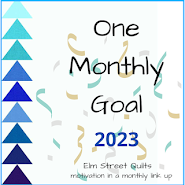