It was a gray day yesterday with just a few sun breaks. The temperatures are quite a change from our trek across Idaho, Montana, and North Dakota. All the way we've been running our air-conditioning nearly full time. Here in the Great Lakes region, the heat pump is where it's at. We had some "life" errands to take care of yesterday. We needed to do our grocery shopping, and Mike was determined to find a do-it-yourself car wash where he could wash the layers of bug guts off his beloved truck. I'll admit, the collection of bugs was impressive.
We were in a slow mood, and it was past lunch time before we got on our way. It seemed the perfect time to try out the Miners Pasties and Ice Cream, where we'd been promised the best pasties in Munising. The restaurant was on the back side of a main street building, and so it was a bit of a trick finding it. 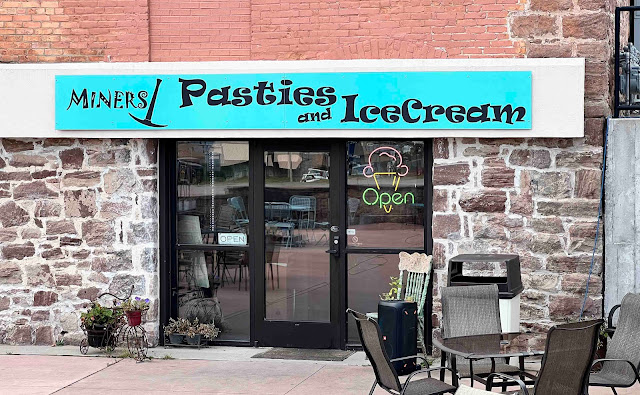 They have a regular menu of about five variations of pasties, and then there is a daily special. We ordered off the regular menu. I had the Yooper. "A classic," according to the young man serving them up. Mike had the Breakfast. "The local favorite!" They were made up and kept warm in a large warming oven. 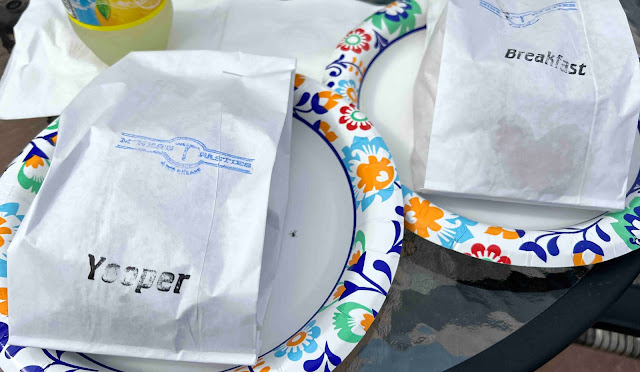 I can tell you right off that the crust was more appealing than the one I'd had on our first visit. It was more like a pie crust. With my first experience, the crust seemed soft and mushy, as if it had been steamed for too long.

Inside, mine had roasted root vegetables...carrots, rutabagas, potatoes, and onions, and some meat...beef, I think. 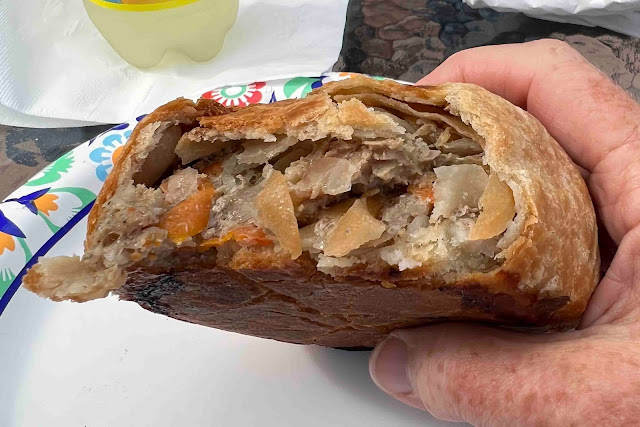 Mike's had egg, bacon, potatoes, and onions. They were both very good. They were also very filling. I was still not really hungry for dinner later in the day. 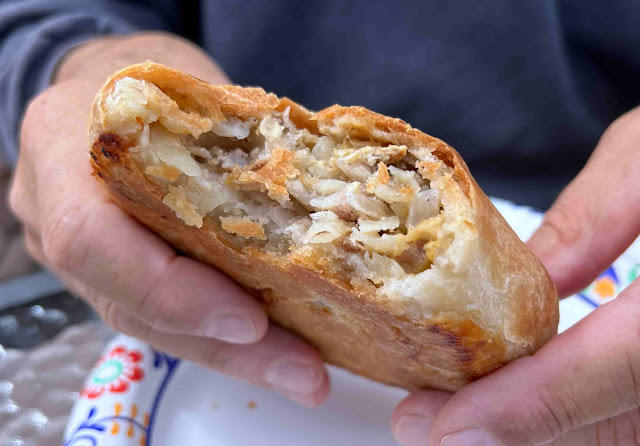 We were seated outside in an area that was sunken from the main street level. On a retaining wall to our left was a display about Henry Ford, who apparently did business in Munising while also vacationing there. 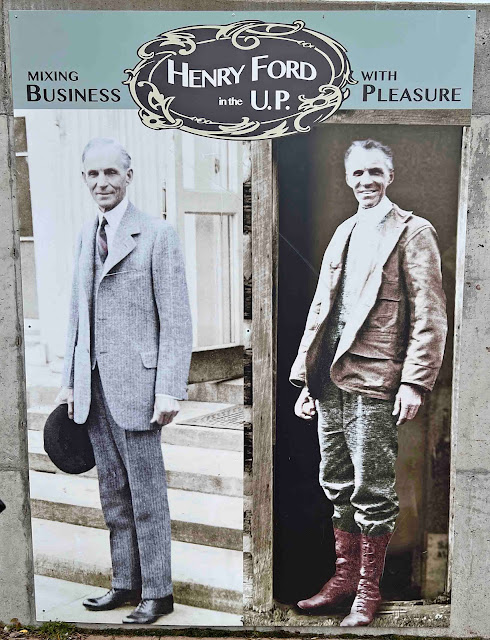 If you're interested, you can read about him and his vacations and his businesses in the following photos. Even if you're not interested in reading the information, the pictures are interesting. 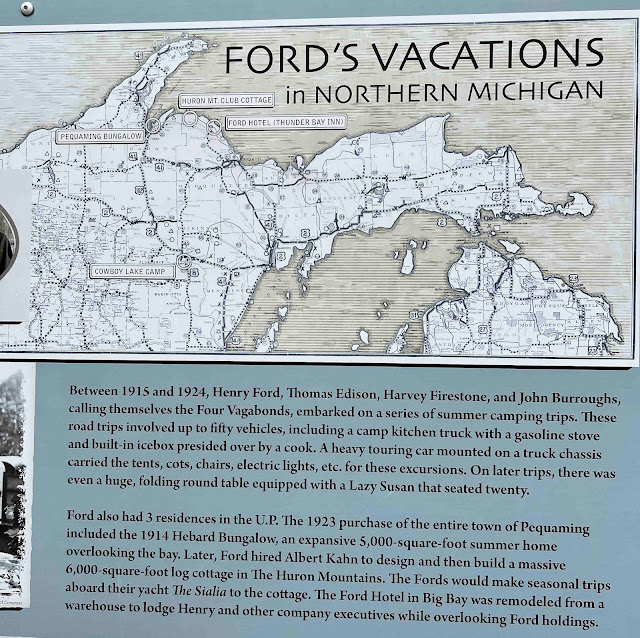 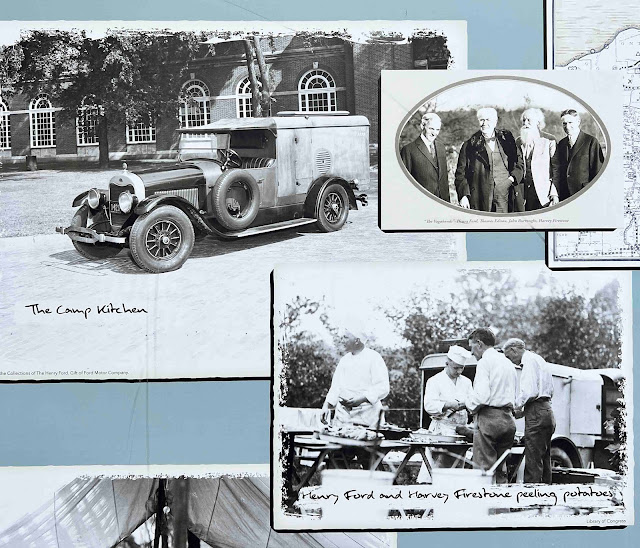 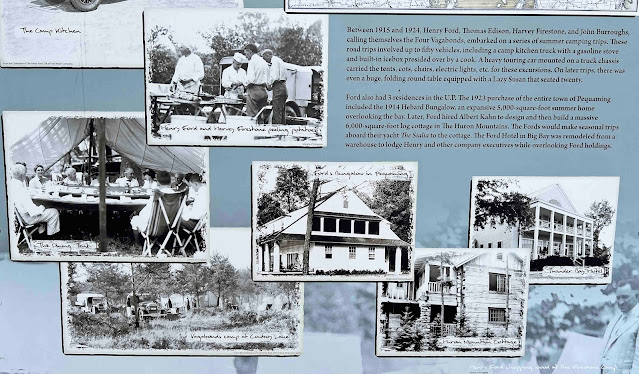 The inset in the photo above was a little difficult to read, and so I cropped it out and posted it in the next image. I'm not sure that improved it much, but see for yourself. 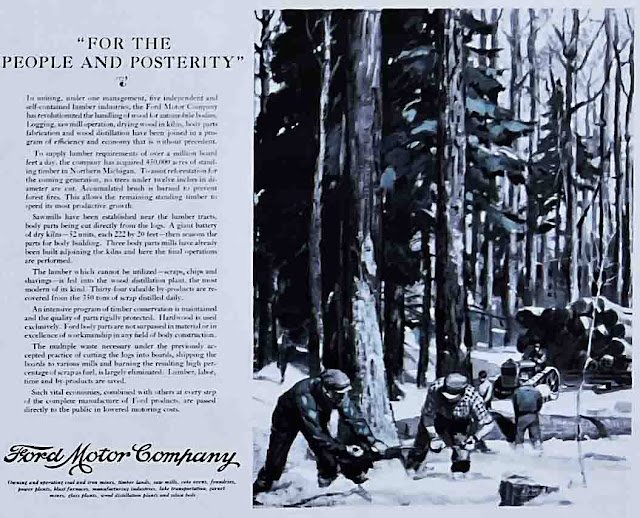 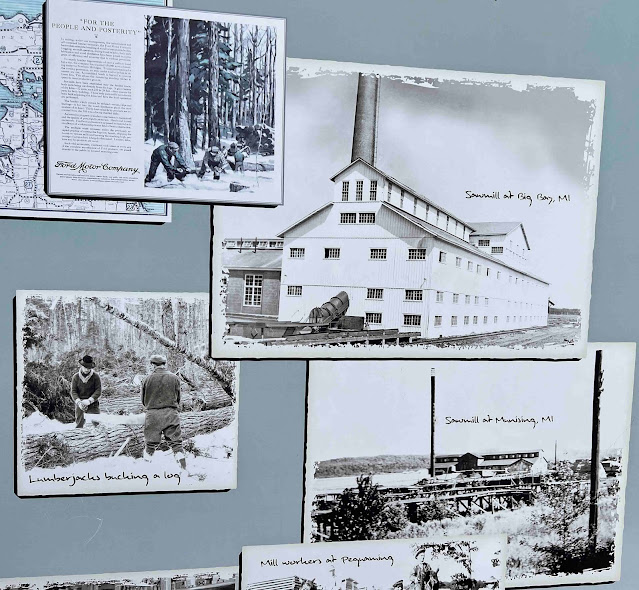 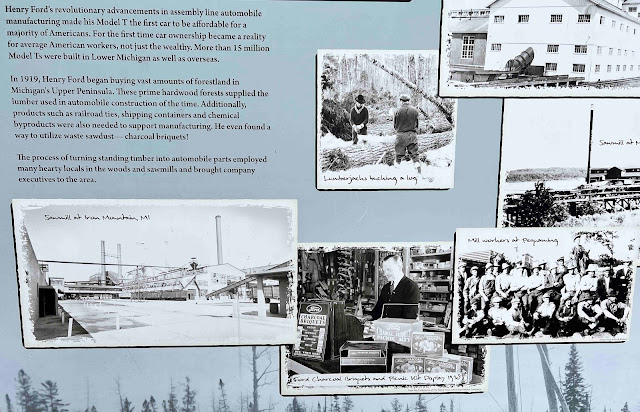 We did our grocery shopping, but there weren't many stores to choose from in Munising. We ended up at a small market where all the "fresh" produce was wrapped in plastic, and the only lunchmeat was sealed in shrink-wrap. In general the "lunchmeat" was something chopped and pressed, and not very appetizing. Oh well. We got the basics, and I'll make some substitutions in the upcoming week's menu.
Back at the RV, we put away our groceries. Mike took off to go wash his truck. I started in on my slow-stitching. I stitched and stitched and stitched and got fairly far along on this first section. 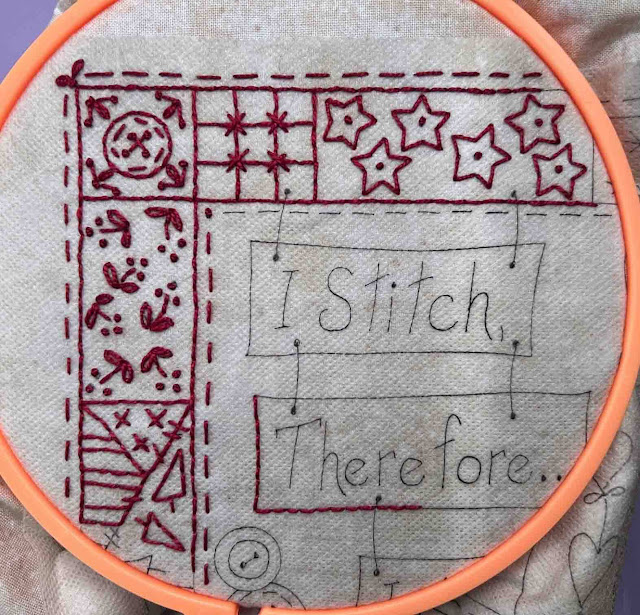 Sadie was my stitching cat. 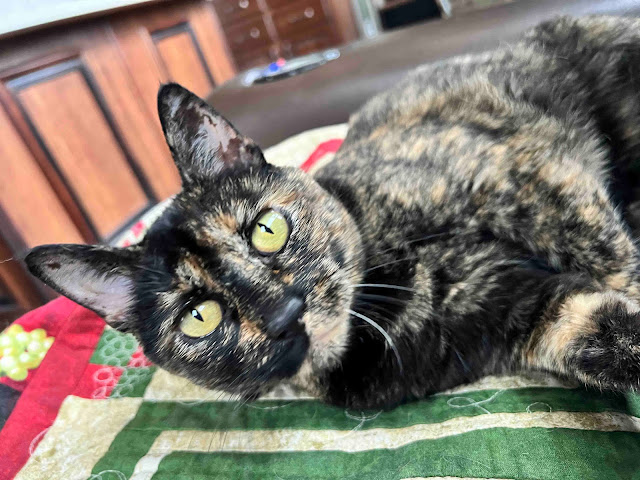 Smitty spent the afternoon flaked out on his purrsonal quilt for an excellent napping experience. 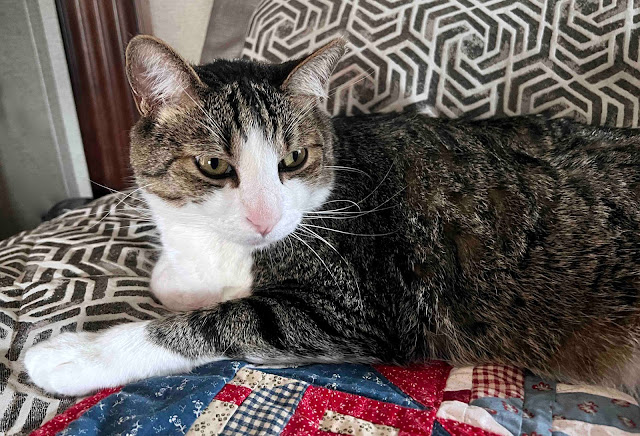 I tried a new recipe last night from my "Untested Camping" category. This is Creamy Tomato Soup with Tortellini. 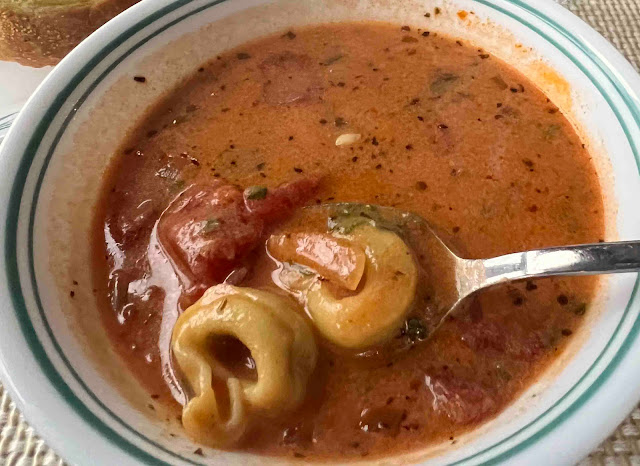 My picture wasn't as appetizing as the one that came with the recipe: 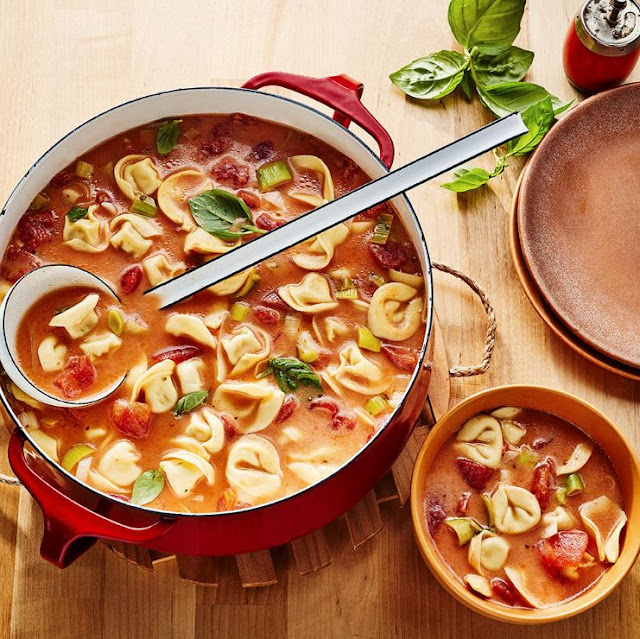 It was a great camping recipe. Tasty and easy. I couldn't find leeks at the grocery store, nor could I find fresh basil. I used regular yellow onion in place of the leek and parsley in place of the fresh basil. We wouldn't have known the difference. Surprisingly, the grocery store had frozen tortellini, and that's what I used. The recipe is from Eating Well. I believe Eating Well was published as a replacement for Cooking Light, but I don't know that for sure. In any case, the soup has just 322 calories per serving, and so it's a bargain on the calorie counting front.
Okay, so today is going to go pretty much like yesterday did. We've eaten all the fudge we picked up in Bayfield, but I found a place just down the road that sells it. Certainly we need more of that. Also, there's another grocery store in town. We'll go back again today and see if we can get the rest of the items on our list. It's a rainy day, and so it's a reading, watching TV, and slow-stitching day. It's the best kind of a day if you're a kitty...plenty of lap time.
Posted by Barbara at 6:27 AM

The gifted man bears his gifts into the world, not for his own benefit, but for the people among whom he is placed; for the gifts are not his, he himself is a gift to the community. ~ Henry Ford

If you get down near the Mackinaw, they have the absolutely BEST fudge around. We get it every time we come to Michigan. Our daughter lives in Traverse City and so have to have fudge.

I've only been the the UP area once, many years ago. Seeing your posts makes me want to go again. Your soup makes me hungry!!

Around here, fresh basil can be tricky to find, depending on where you live. I usually plant my own. So not surprised that you couldn't find those items. The soup looks good, though! Glad you are finding fun places to explore!

Looks like Ford et al were at the forefront of glamping!
Thanks for posting all those historical signs.

At least you're making good use of your rainy day break and not trying to do too much. I'm sure the break is good for all concerned. Seeing the soup must mean that Resident Chef will soon be setting his sights on filling the soup pot (and the freezer!).