Well, miracles never cease. I'm up early this morning...ahead of those other internet hogs. I would never hog a public internet service by uploading dozens of pictures, and taking up all the bandwidth, and generally squeezing the other users out. Or would I? 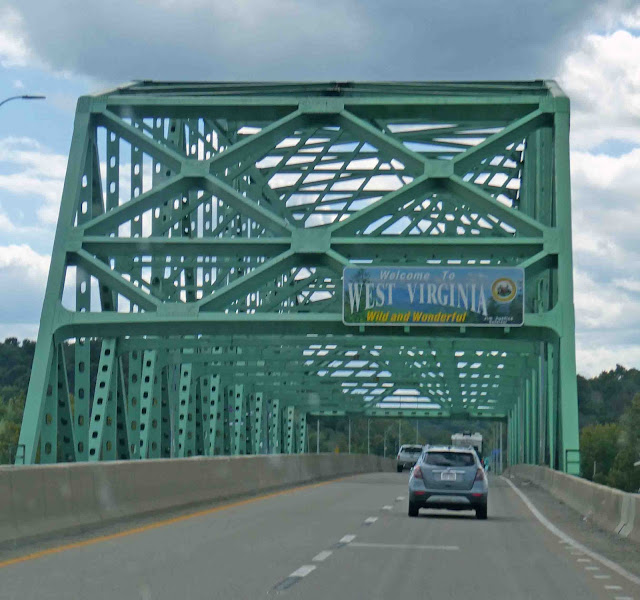 Well, yes, I most certainly would...and I won't even be sorry because it's vitally important that I show you the sign from when we crossed into West Virginia yesterday. It's a new state for the side of the RV, although we were both so wiped out after we arrived yesterday that we haven't done it yet. Soon, my friends. Soon. I know...it's hard to wait.
As I mentioned in my last post, we got going down the wrong road yesterday, thanks to our nav unit, and our own inattention. Mostly, I'm blaming the nav unit. Wouldn't you? We traveled different interstates most of the way, tree-lined, and not particularly scenic. It's too bad fall hasn't made more of an appearance yet because I'm sure these areas are stunning in their fall foliage. 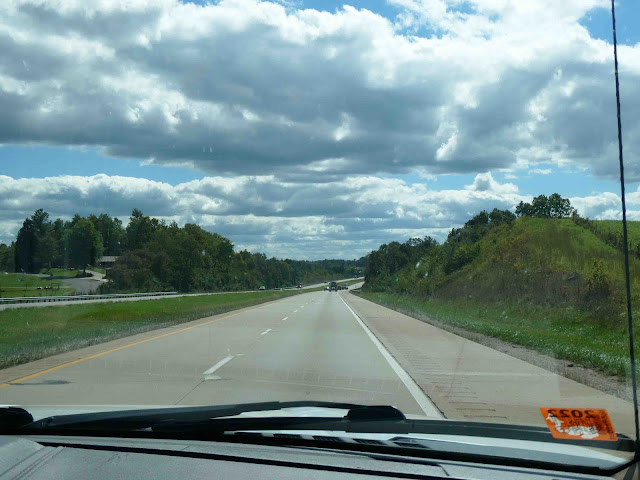 Of interest along the way, we passed by a sign that told us it was the crash site of the USS Shenandoah. We passed by too quickly for me to get a picture, but I found this one in the public domain. 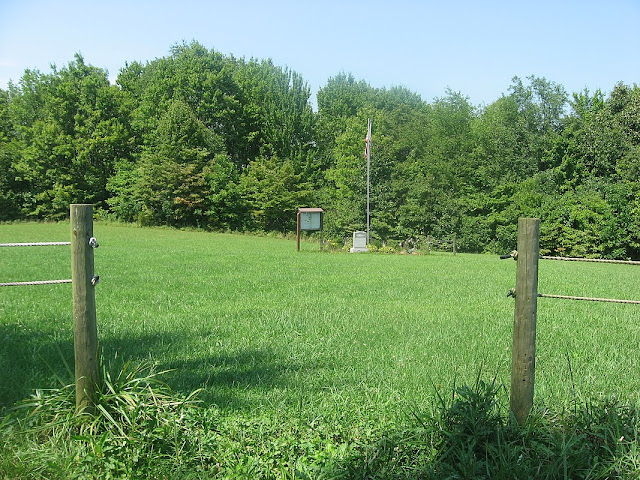 The USS Shenandoah was the first of four United States Navy rigid airships. It was constructed during 1922–1923 at Lakehurst Naval Air Station, and first flew in September 1923. It developed the U.S. Navy's experience with rigid airships and made the first crossing of North America by airship. On the 57th flight, Shenandoah was destroyed in a storm over Ohio in September 1925. Here's a picture of the airship in better days. 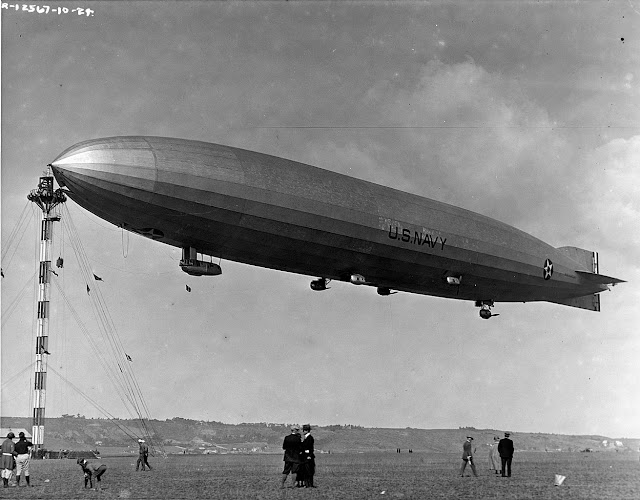 You can read more about it at its Wikipedia page right here.
Eventually, we crossed over the Ohio River, which is doing a stellar job in its role as the state line between Ohio and West Virginia. 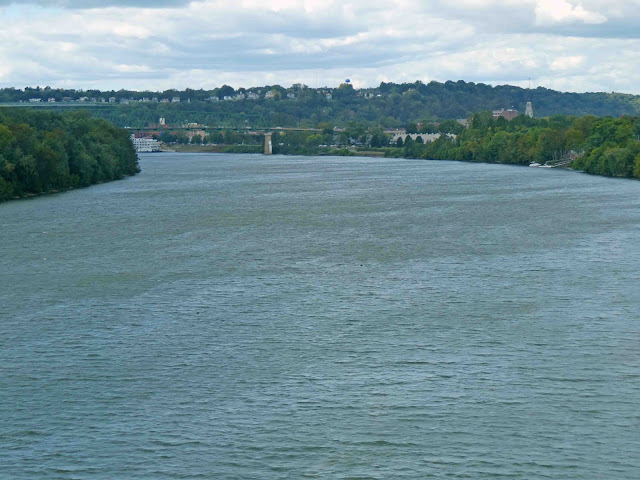 We were getting hungry, and looking for a place to stop for lunch. The rest areas were not particularly friendly toward RV's with slide-outs, and so we ended up at a Subway. When we stop in these small town restaurants, we're often having to park a distance away and then tramp through fields of weeds. In this particular weed patch, there were lots of these little blue guys blooming. They were the only blooming things I saw during the day. 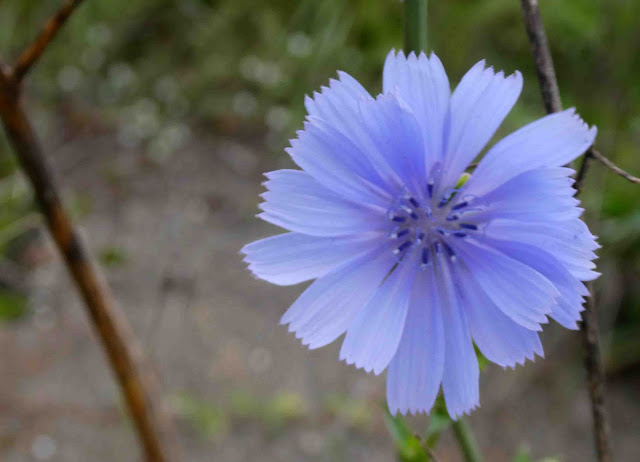 Eventually, we passed through West Virginia's state capital of Charleston. We could see the Capitol dome from the road. It was beautiful glowing in the sunshine. 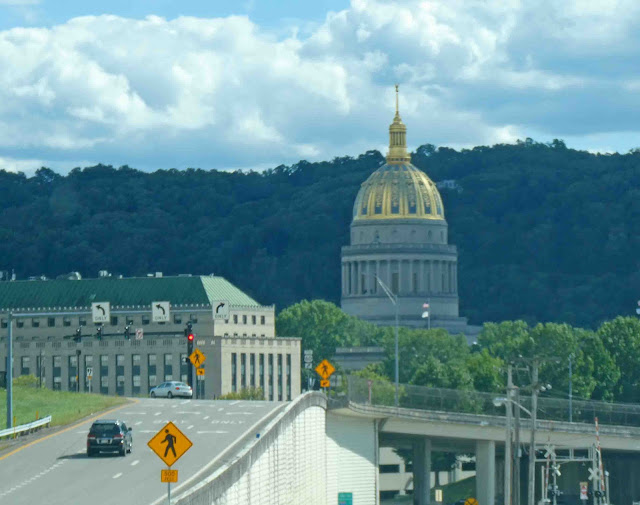 Here's another shot of it as we passed by. 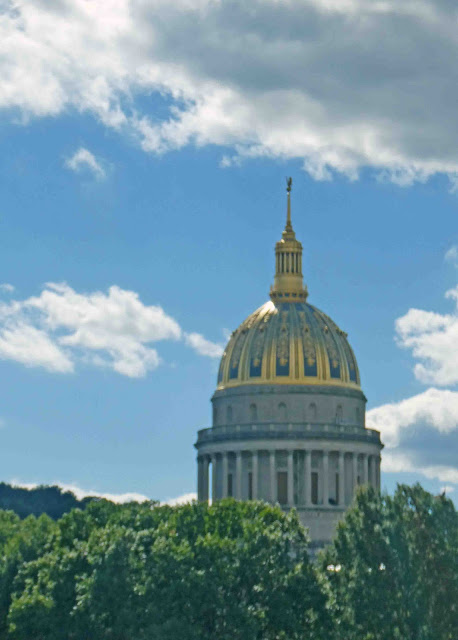 We left the interstate here, and began a long trek over US Hwy 60, which happens to be the Midway Trail National Scenic Byway, and listed in my scenic byways book. There wasn't really anything to photograph with this next entry, but I wanted to make note of it anyway. Daniel Boone Park couldn't be seen from the road, and there was really nothing to photograph in Booker T. Washington's old stomping grounds.

We paralleled the Kanawha River most of the way. It is the largest inland waterway in West Virginia, and its valley has been a significant industrial region of the state since early in the 19th century. 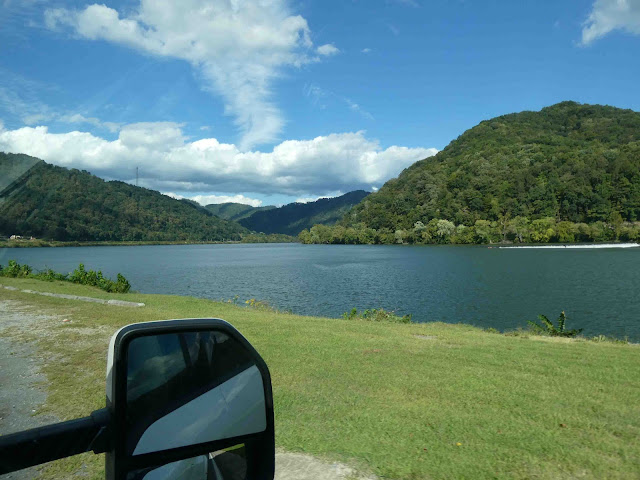 We passed by Kanawha Falls in the town of Glen Ferris as we approached our final destination. 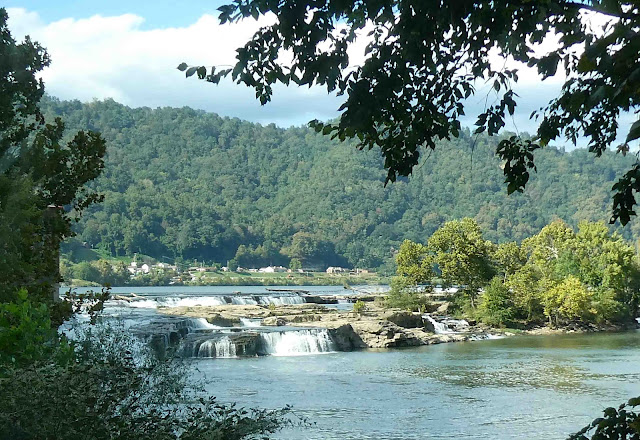 This is the one barn photo I took yesterday...this one in West Virginia. 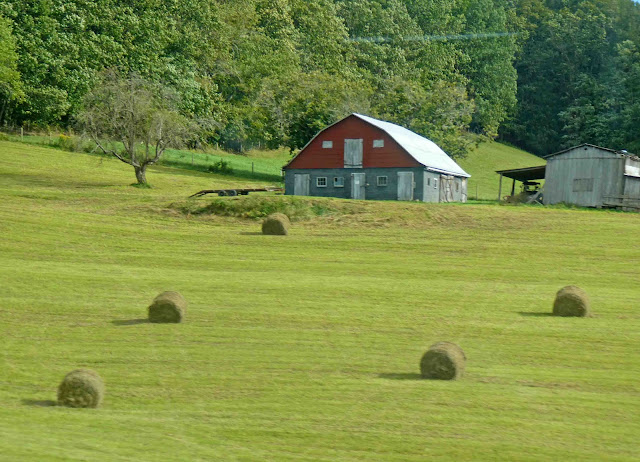 From there, the road got downright scarily narrow and winding. 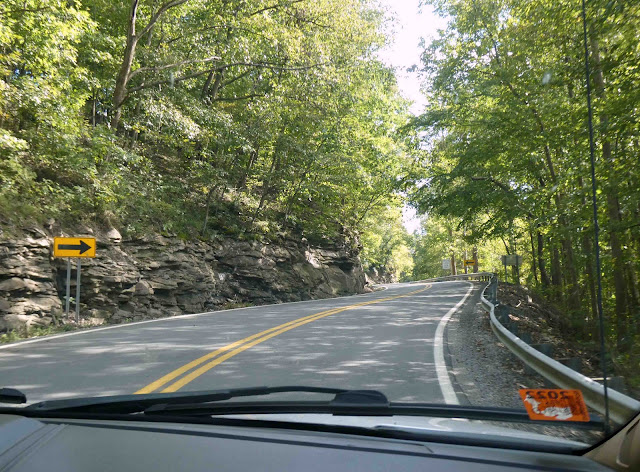 When the road straightened out, we got into the also scarily undulating hills. When you come up over the top of those blind rises, you just hope someone isn't in your lane on the other side. 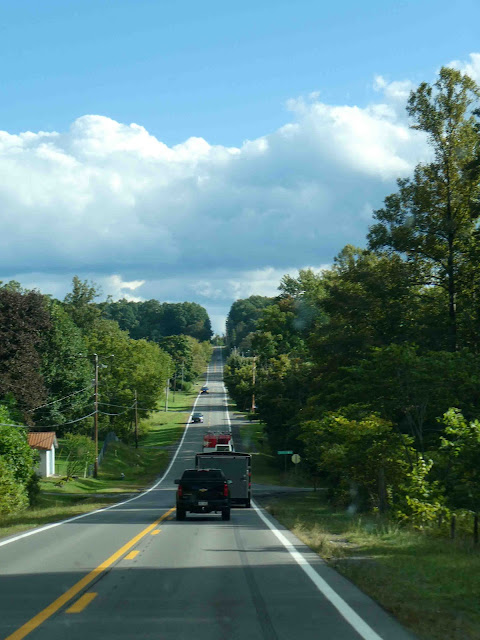 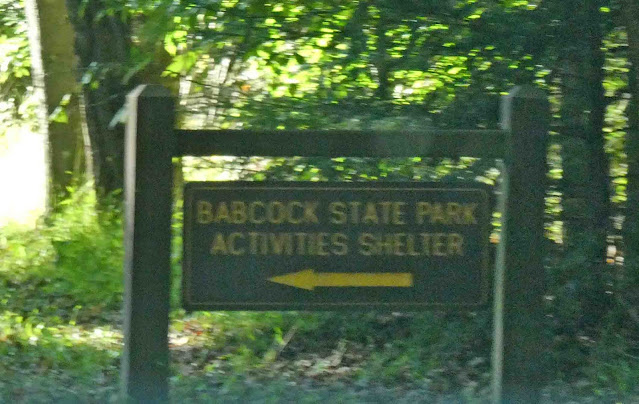 And that was our day of driving. We have two items on our agenda for this area: explore Babcock State Park, where we are staying. Also, explore New River Gorge National Park...America's newest national park. I'll know more once we get to the visitor centers and find out what we want attractions we want to take in.
Okay, so I'm expecting to actually be able to upload this post. After writing it, I'll be disappointed if I can't. And now I'm modifying my no blogging message to say I'll blog if I can. With so few people hogging the bandwidth here (aside from me, that is), I might just be able to get it done. Only time will tell. For now, I'm going to do some slow-stitching. We've been so busy this past several days that I haven't worked on it at all. I'm looking forward to getting back to it.
Posted by Barbara at 5:43 AM

I would love to live like a river flows, carried by the surprise of its own unfolding. ~ John O'Donohue

I have been to WV 4 times: first to help my brother and sister-in-law to move there, twice to visit them, and last to help them move back to Michigan. Those mountain road are scary, especially the curves (which are downright dangerous in the winter). One activity you won't be able to do at the New River Gorge bridge is bungee jumping. They outlawed that several years ago. It was fun watching when we were there. We also visited a coal mine not too far from Huntington, WV. There is actually a lot to explore in WV, but I know your time is limited.

Wow, so beautiful. I hope you get several days to explore and enjoy. I take it that the State Parks now have WIFI? BIG improvement, if this is true (and I do so hope).

It is another pretty state. This is an amazing country. That blue guy looks like chicory, which supposedly has a coffee-like flavor. By the way, the peeling tree we saw at Dahlia Hill was a yew. So there yew go.

The blue flower is common chicory. Some people dry the roots and grind them for a coffee substitute. It originated in Eurasia and was brought here.

The Kanawha Falls are really pretty. I wouldn't want to be traveling some of those roads in the winter although there has to be a certain sense of adventure wondering what's around the next corner or over the next hill.

If you happen to go back by Parkersburg there is an amazing quilt shop called Bolts and Quarters. It's huge and amazing! Have a great time.

I'm a tiny bit disappointed in your choice of Subway for lunch! I have had much more success (and met more interesting folks) but only stopping at privately owned, non-franchise restaurants, especially if they are named for someone in the family. "Mom's Soup Kettle," "Harry's Sandwich Shop," etc. You can't get hamburger soup at Subway, but you can get it at Mom's, and Mom will come out of the kitchen and tell you how to make it!

"Country Road" by John Denver comes to mind as you go down those by-ways.

I would imagine those narrower roads and curves are a little more nerve wracking with an RV than just a car. I do enjoy drives like that!