It took me a long time to get going yesterday morning. The gray and rainy weather kills motivation. Even though I was slow getting started, I managed to get most things done that I wanted to. It was time to take the first stitches on my newest embroidery project: A Joyful Journey. I'm barely started with January's block. 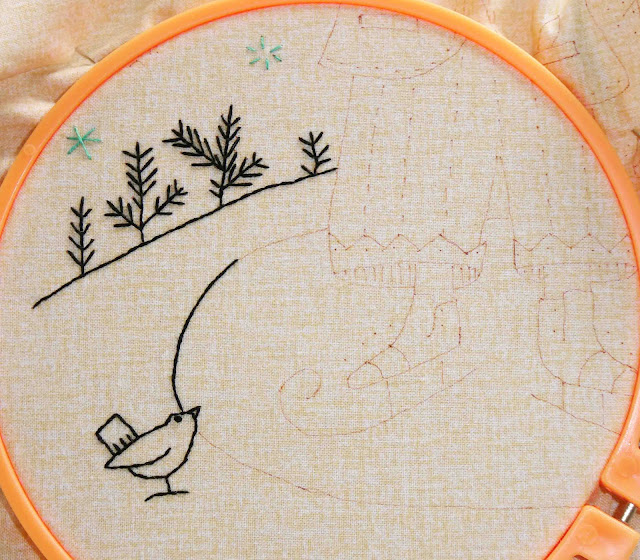 I might have stitched some more, but it was getting late in the morning by then, and I still wanted to do my exercise routine. For the most part, I've been sticking with my routine pretty well, but I missed the past couple of days.
After that, I tried something new. Remember when I was late with my post the other day? It's because I got distracted while looking for a quotation to put at the end. I was looking for something about cherries when I saw this one:

My family makes these vinegars - out of everything from grapes to peaches and cherries. We go through the whole process with the giant vat and drainer, label them, and give them as Christmas presents. ~ Mario Batali

Wait...cherry vinegar? And, you know, I can't see something like that without having my interest piqued. So, then I went Googling cherry vinegars, and it turns out it's pretty easy. Half a cup of pitted and chopped cherries and 2 cups of vinegar. Leave it overnight and let the infusion happen. So, okay...I'm game. I had cherries left over from our desserts from a few days ago, and so I got that going. 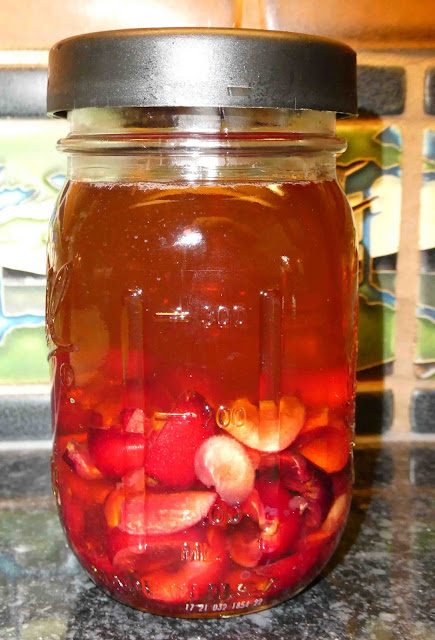 This morning, I strained the solids out of it and funneled it into a pretty bottle. It can be used in place of red wine vinegar. Mae likes these vinegars. They're serving up dinner on Father's Day, and so I'll take this bottle and give it to her then. 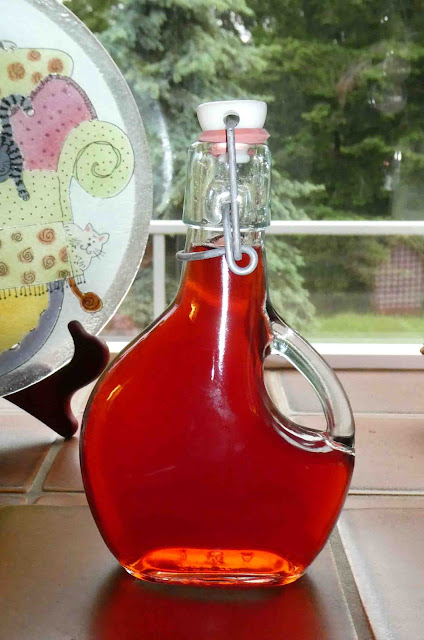 But getting back to yesterday...the first thing on my to-do list was to quilt the next row of blocks for the Garden Sunshine quilt. I'll probably quilt the "bug blocks" the same way...a meandering flight path for the bug...or, in this case, two bugs. Also, I outlined all the applique and quilted some veins into the leaves.

The next block over was the bee skep. I'd given some thought to how I wanted to quilt it. I considered pebbling. Also, I considered hexagons, like honeycomb, but the measurements didn't work out to make it symmetrical. Then, I remembered this little bee motif from Lori Kennedy. I've used it before in a different quilt, and it's pretty easy to do with a couple of practice runs. 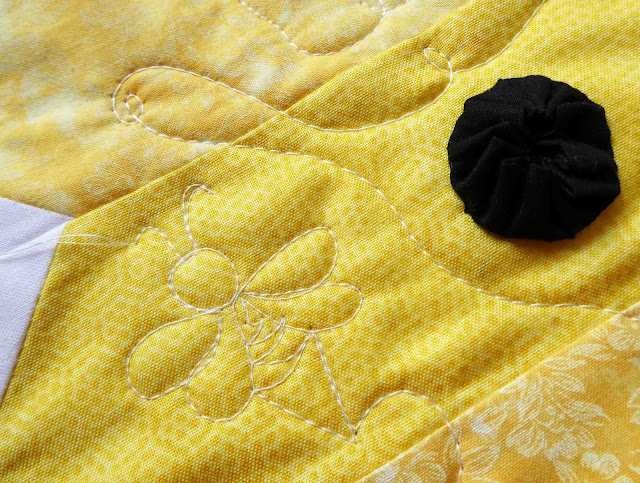 So, I did a few of those flying around the bee skep. 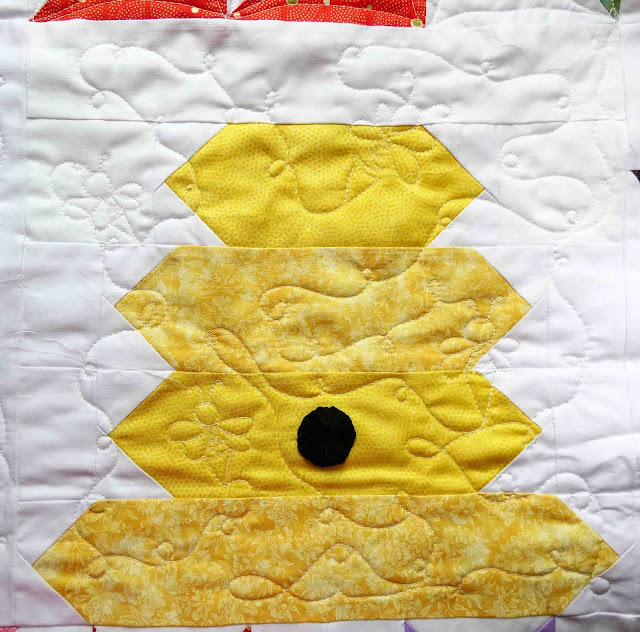 About that time, Smitty showed up. He'd obviously been out hunting gophers. He caught one too. By the end of the day, he'd cleaned his nose back to its usual lily white. 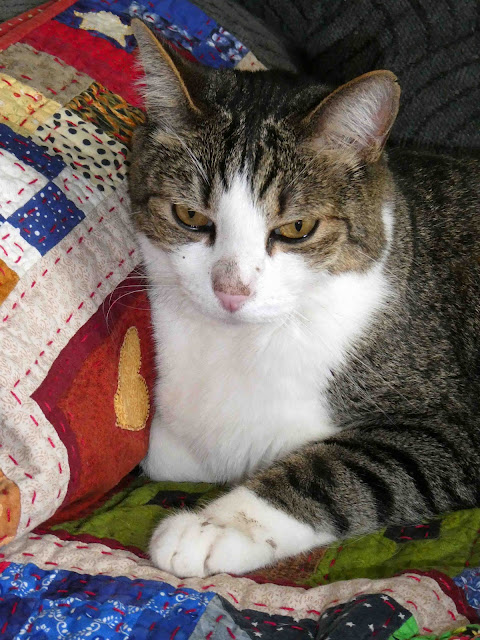 So, he and I had a little talk about his hunt, and then I went back to my quilting. For this star-in-a-star, I did some more dot-to-dot quilting. 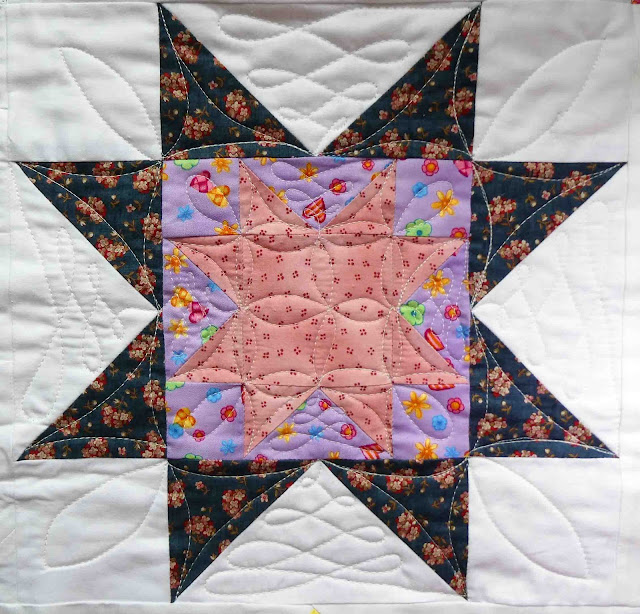 And I finished off another bug block the way I'd done the other one...outlining the applique and then quilting in a meandering flight path. 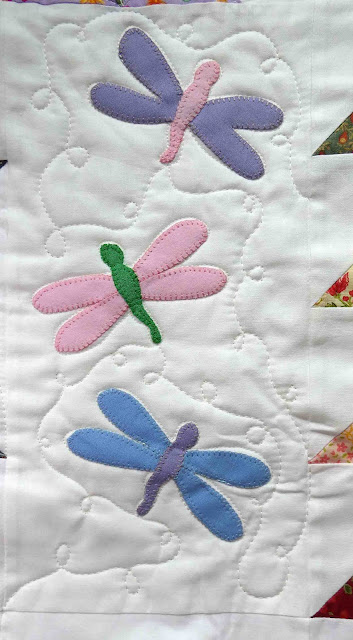 Okay, so that was the end of the day for my free motion quilting. I'm taking care of my wrist and trying not to flare it up more. I'll do another row of blocks today, and that will make three out of five rows complete. When all the blocks are quilted, I'll go back and quilt the rows of flying geese, and then the outside border. It should be ready for binding by next weekend, if all goes to plan.

Next, I've been putting together the hand embroidery project I want to take along on our next sight-seeing tour to the Great Lakes region. I'm taking along all the redwork blocks for this quilt, called "Stitchin' Wisdom" from Bird Brain Designs. I fell in love with this quilt when I saw it online, and it had to be mine. Here's the picture from the pattern cover, but you can get a better look at the website right here. 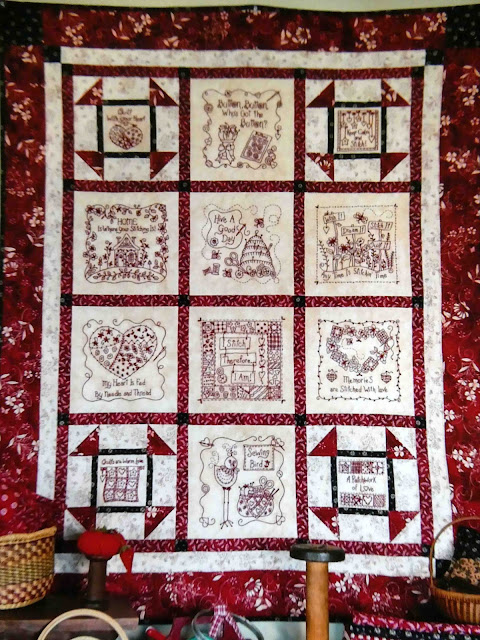 I'm trying to minimize the amount of sewing equipment I haul along for that trip. We'll be doing a lot of sight-seeing, and so there won't be time for machine sewing. Instead, I've printed all the embroidery patterns on Sticky-Fabri-Solvy. That way, I don't need to trace anything. 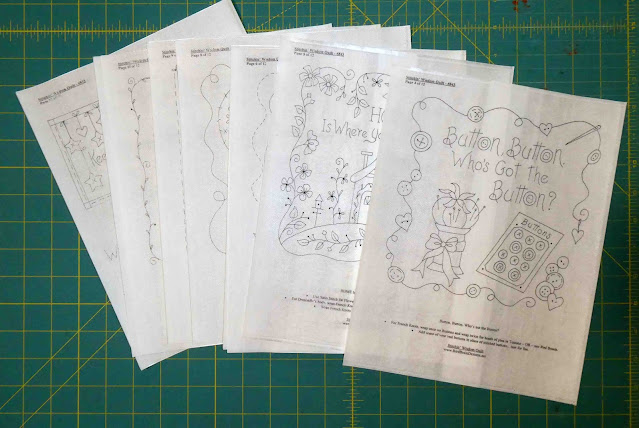 Of course, literally everything on the printed page also gets transferred to the Sticky-Fabri-Solvy sheets. I would have wanted to trim off the excess anyway, but I got rid of all the words that way. 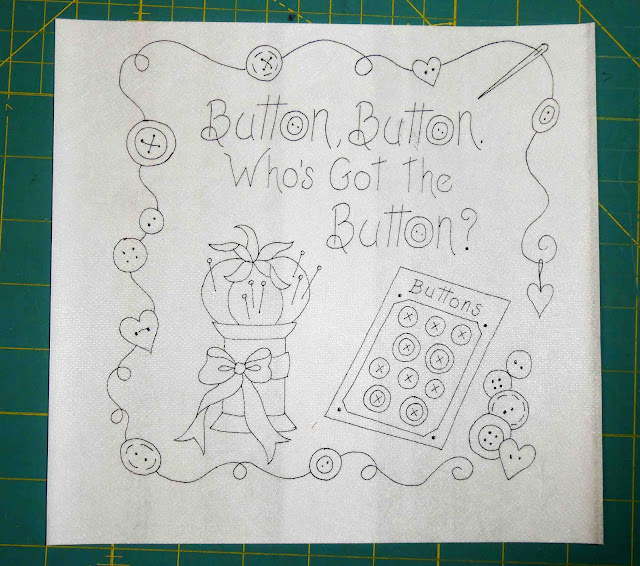 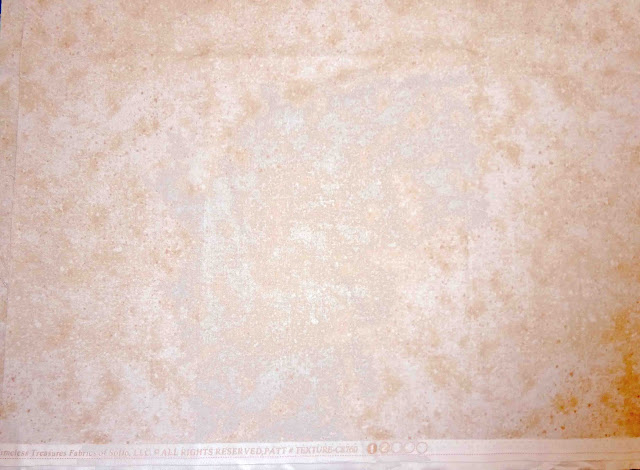 And I'll stitch them with #8 Perle cotton. 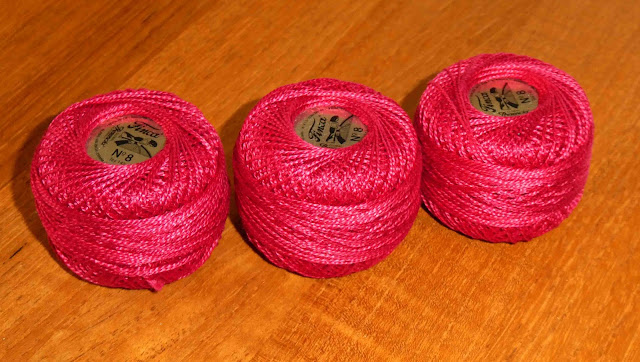 All the background blocks and associated stabilizers are cut, and now that's ready to be packed into the RV for stitching while we're traveling. Think I can finish the whole thing in two months? Doubtful, but it'll be a good test.

So, then, I was able to start making the pieced blocks I need for the next two Calendula Patterdrip embroidery patterns. I started with six half square triangles. 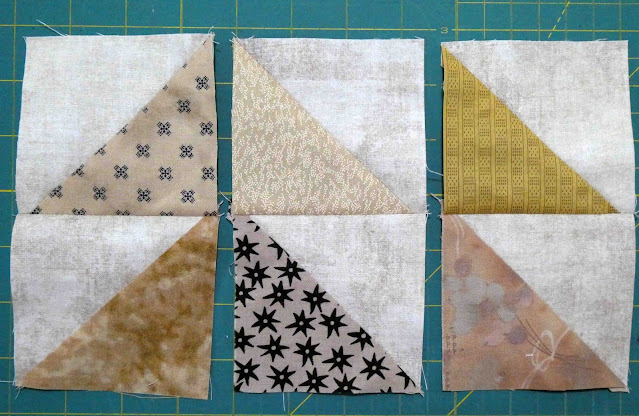 I might have to change the orientation on these. I thought I was sewing them together with proper orientation, but then I saw a picture that gave me pause. I'll have to look at it again. It was getting late in the day by then, and I was getting tired of sewing.

Taking a walk outside, I discovered the first peony is nearly open. This one is called "Joker." 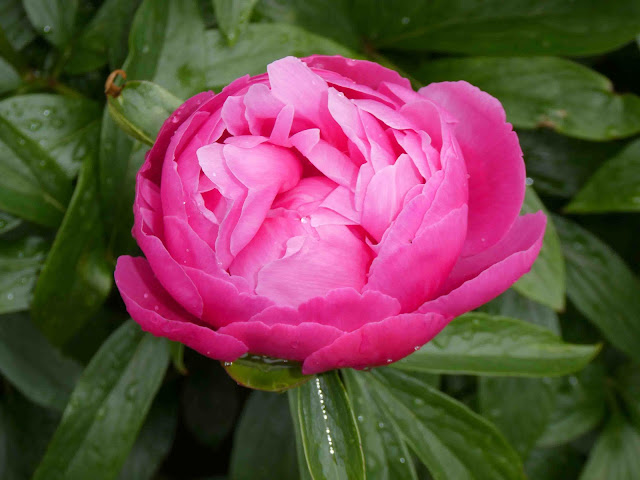 Also, the newest clematis has a flower opening. It looks as if the slugs have been after it. (The slugs really like this wet weather we've been having.) 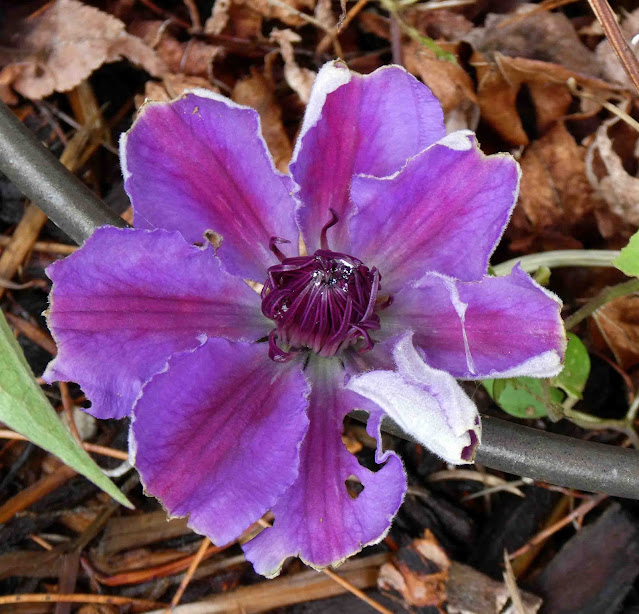 And, except for making dinner, that was the end of my day.

Today I'll get back to my quilting, and then I'll get to work on some more of the Calendula Patterdrip quilt blocks. Also, I've been dragging my feet on my housekeeping chores, and so I simply must do some of that today. It's still very wet. If the forecast is to be believed, we should get some better weather by Wednesday.

Men are like wine - some turn to vinegar, but the best improve with age. ~ Pope John XXIII

Good morning Barbara! I was reading your blog about the sticky poly solv and then read description on Sulky. What I don’t understand is how it works. Is the piece iron to wrong side of background and you can see the stitch lines or is it on top. It loooks interesting way of doing hand stitching but my poor little brain is just not grasping it.

Enjoy your blogs and all your projects and trips.

I'm also curious about the Sticky Solvy use. Do tell!
Your peony is beautiful. Ours started out well, but a big, windy thunderstorm just destroyed them, and they never recovered. So sad -- they last such a short time as it is.

Your free motion quilting looks great!
I have never seen a vinegar bottle like that, very nice.

Congratulations to Smitty on his successful hunt. That cherry vinegar looks really interesting. I might have to try making some myself when I find cherries showing up in our local markets. It will have to wait until I get home from Nashville however.

I too am curious about how Sticky Solvy works. I love your little bee you quilted.

Cherry vinegar sounds yummy. I'm trying to decide if I will get my courage up to liberate a bunch of chive flowers from the local park to give your chive vinegar a try. Hmmm....wonder if they'll let you stitch whilst in jail?
Stitchin' Wisdom is going to be a great travel project. If it were mine though I think I'd simply be forced to stitch it in blue rather than red. I'm a rebel that way.

You are buzzing right along on that quilting! Smitty and his dirty nose and peets! Cute!

This is a wonderful new project for your trip - I love the block sayings and designs! Great job in prepping for all the moments of hand stitching you might have ahead of you!