Once Upon a Daytime Dreary

It was another dark, rainy day. I get little snippets of the Seattle Times in my email inbox. Yesterday I read they were expecting more rain in Seattle, and I found myself shaking my fist: "SEATTLE!!" I said. As if Seattle were the cause of all this. Still, I have an idea that if it would quit raining in Seattle, it would also quit raining in Portland. So...I'm still blaming Seattle. You can try to change my mind, but I'm kind of dug-in on this point.
Well. It was a good day for having breakfast with my friend Sue. We parked and ran inside. I paused to take a picture of the apple blossoms on the apple trees growing near the restaurant. 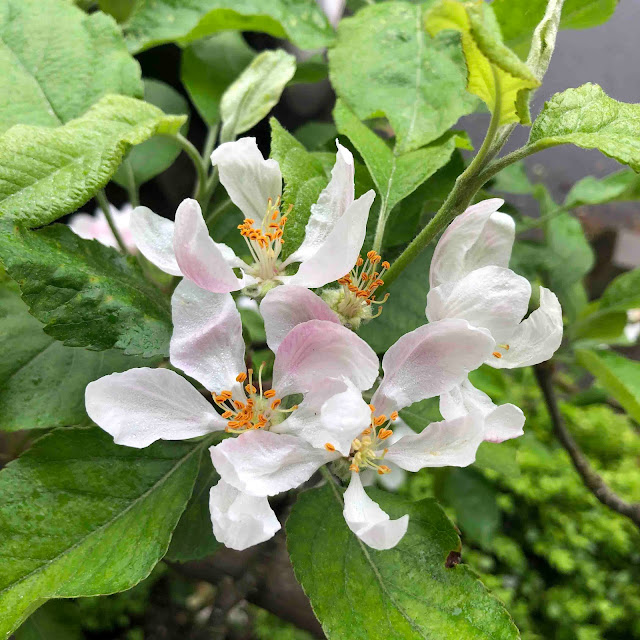 It had been some time since we'd visited the South Store Cafe, where they serve really good oatmeal. And while oatmeal doesn't sound all that fancy, it's something I don't usually want to make for myself. It's always a treat to have it served up already made with plenty of fresh fruit. Sue gave me some candies and some flowers from her garden. Her garden is ahead of ours here on the hill. 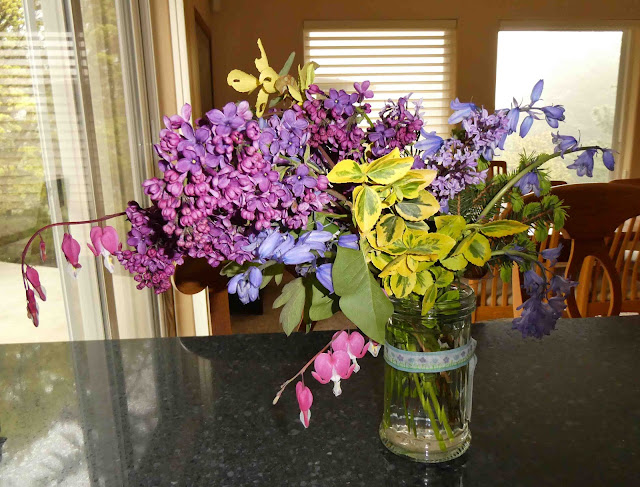 I had some errands to run in town. When I got home, I finished off the stitching on the name plate for the next Shop Hop quilt block.

We visited Primitive Gatherings a couple of winters ago when we were in Southern California. I think up to that point, I hadn't realized it was an actual shop. I'd always thought it was a brand name. The shop was big and nice. You can take a little tour at this post right here. They had lots of different fabrics, but they seemed to specialize in these vintage prints. This is the one I chose to represent Primitive Gathers in the Shop Hop quilt. 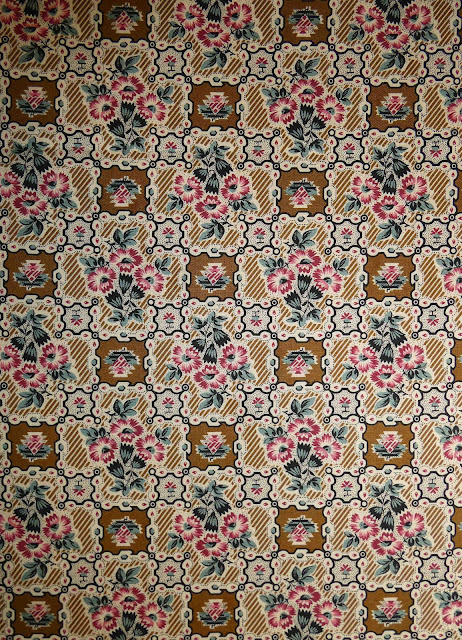 Sadie helped me cut the pieces for my quilt block. 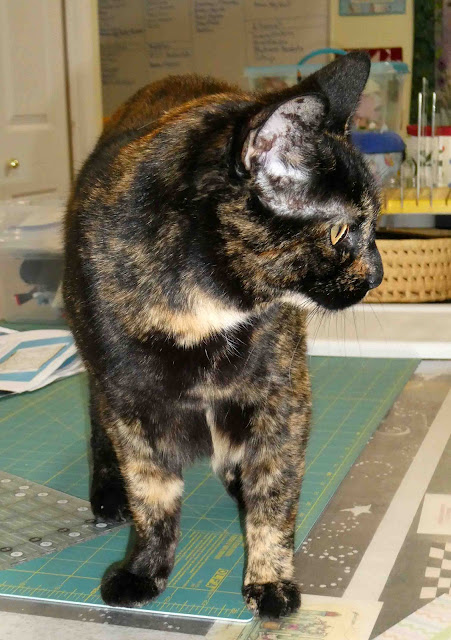 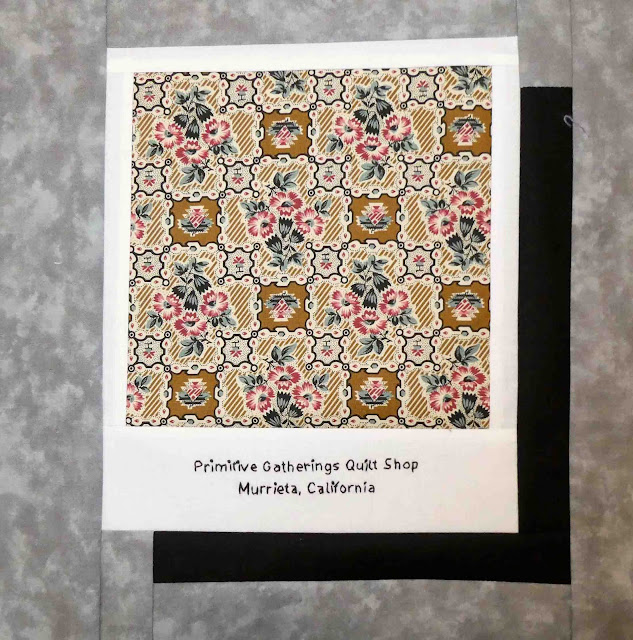 The only other thing I did in the sewing room yesterday was to cut the center for the next Vintage Linen block. This one is a little oddly shaped, and a little smaller than the others I've done so far. 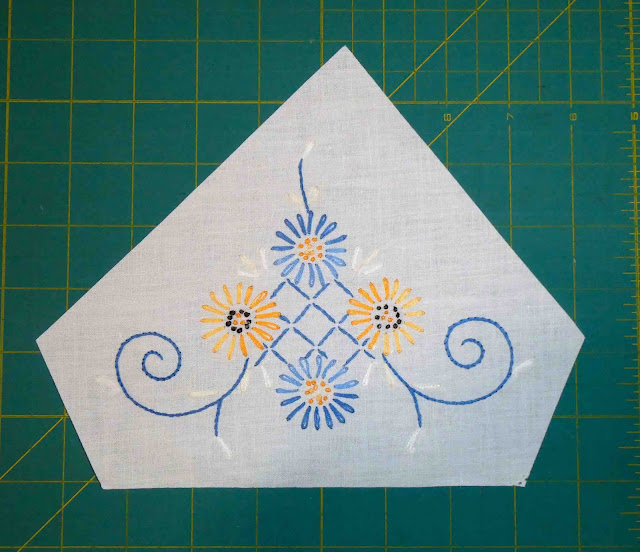 As I'm picking through my grandmother's dresser scarves and doilies, I'm realizing that finding enough motifs for my quilt might be a challenge. There is quite a bit of cut work, and I might end up using some of those, stitching them to a solid piece on the back. It could be pretty. For now, this is the one I'll be working on.
The only other sewing I did was to finish up the section of Pieces of the Past that was hooped up. As I look at this picture, I'm thinking I might have to couch those green lazy daisy stitches to hold them open. 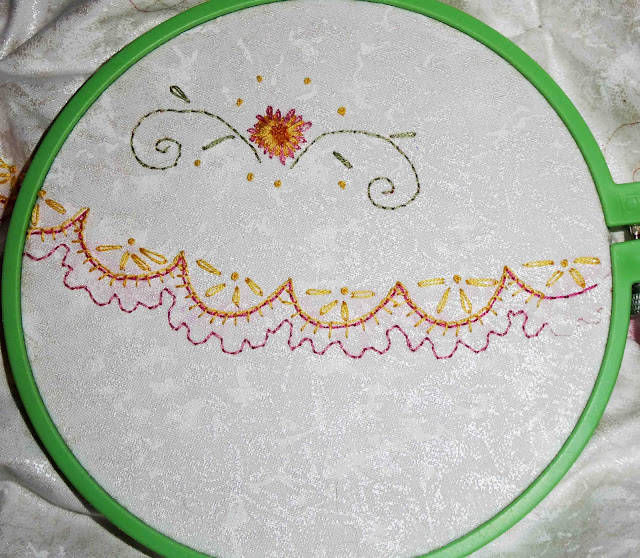 When this was finished, I moved my hoop up, and I'll start stitching more of the sugar bowl. This is a big piece, but it's moving along faster than I thought it would. Originally, I thought I might only stitch half and then come back to it later. Now, I'm thinking I'll probably finish the whole thing.
This morning, I had two kitties sitting beside me as I worked out my word puzzles. I've been playing Wordle, Quordle, and Waffle. Sometimes I get all three. Sometimes I can't get any of them. I figure it's got to be good for my brain, right? Certainly it doesn't hurt. 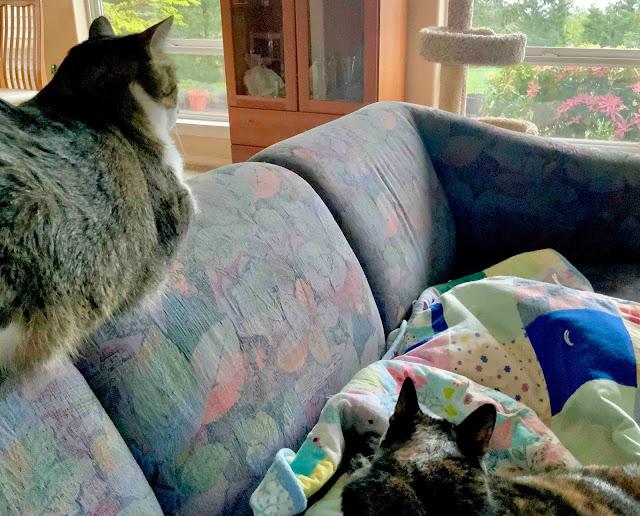 And when you're playing word games, three heads have to be better than one, right? And when you think about it, 1-1/2 tails can't hurt either.
Okay, so today is Mike's birthday. The poor guy hits the big 70 today. He's enjoying his first day as a septuagenarian. It's a dubious honor, for sure. It does beat the alternative though, so we're not complaining. I'll be making his favorite Eggs Benedict for breakfast, and I'm making him a favorite dinner tonight too. We've always referred to it as the "yellow dinner," since everything on the plate is yellow. I'll share the chicken recipe with you. It's a family favorite. I first found this recipe back in the late 1980's. It was published in a magazine called "Good Food," that has long since ceased publication. It's a shame because there were always good recipes in that magazine. It was one of those that was the size of a Reader's Digest, and so it was easy to pack along in a purse too. Anyway...the recipe, if you're interested in giving it a try:
Lemon Herb Chicken Saute
recipe from Good Food magazine
serves 6
Ingredients:
1/2 cup all-purpose flour
1/2 teaspoon salt
1/2 teaspoon freshly ground pepper
3 whole chicken breasts, skinned and boned, split
2 tablespoons unsalted butter
1 cup heavy cream
2 shallots, minced
4 teaspoons grated lemon zest (colored part of peel)
2 teaspoons fresh tarragon leaves, minced or 1 teaspoon dried
2 teaspoons fresh thyme leaves, minced or 1 teaspoon dried
4 tablespoons fresh lemon juice (about 1 whole lemon)
salt and freshly ground pepper to taste
Directions:
Mix first 3 ingredients.  Lightly coat chicken with seasoned flour.  Heat butter in medium skillet over medium heat.  Add chicken and saute turning once, until cooked through 8-10 minutes.  Remove to service plate and keep warm.
Pour cream into skillet and increase heat to medium-high.  Deglaze skillet by heating cream to boiling and scraping loose browned bits on bottom of pan with wooden spatula or spoon.  Add shallots, lemon zest, thyme, and tarragon; cook, stirring frequently over medium-high heat until cream is thickened, about 3 minutes.  Stir in lemon juice and remove from heat.  Season sauce to taste with salt and pepper.  Spoon sauce over chicken.  Serve hot.
* * * * *
And so getting back to why this is the "yellow dinner," it's because the lemon in the chicken sauce turns it slightly yellow in color. Then, as side dishes, I serve it with yellow squash, and also with some chicken Rice-A-Roni. Yes, you read that right. Rice-A-Roni. It tastes good, and it soaks up the sauce nicely. And it's yellow. Thus, the complete yellow dinner. Nothing succeeds like success.
The family is coming for dinner tomorrow. I'd already selected a date to celebrate our three May birthdays (Mae, Mike, and me). Then, when I put it on the calendar, I realized it was Mother's Day. Oh well...it'll be good to have the family up, even if I have to do the cooking. I'll be preparing some of it ahead today. Tomorrow, Mike will roast the meat, and I'll only need to do the mashed potatoes. I'm keeping it simple. So, breakfast first...and then I'll get busy with my slow-stitching. There's plenty to keep me busy today.
Oh...and I almost forgot! I need to set a goal for May's

In May, I want to keep moving the New Mexico Kitchen quilt along by completing the 11th block. Here are the blocks I have for this quilt so far:

A man loves his sweetheart the most, his wife the best, but his mother the longest. ~ Irish proverb

Happy Birthdays to everybody! Those "0" birthdays are the hardest, with "5" second-hardest. I like Rice-A-Roni, too. I used to make beef porcupines with Beef Rice-A-Roni, back when I was cooking for two. Dot

I like the blocks for your shop hop quilt and I'm interested to see more of your vintage linens. I wish you a belated Happy Birthday :)

Hello. Catching up on your blog. It's kind of fun reading everything in reverse order.
That photo of your brother in an iron lung! I have never seen a child photo. And what a beautiful smile. My cousin also had polio but with no ill effects other than she had a sickly childhood.
You have so many projects on the go!
The basement. It's so hard to get much of anything done these days. No parts and no labour.
Your planned trip sounds great. But I see you are missing Lake Huron, where my cottage is near Goderich Ontario. I did see you are going to Midland in Ontario though. I love road trips.
I read somewhere that cotton batting should be quilted with polyester thread, and vice versa. Apparently if you sew cotton batting with cotton thread the cotton attracts each other and encourages bearding. One package of cotton batting had instructions to use polyester thread with that warning! I wish I had taken a photo of those instructions as no one ever believes me. Sometimes I use poly thread but usually not. Just doesn't feel right.
My husband and I both had covid! And so we are both recovering from that. Covid saps your energy and it's no walk in the park. We both had coughs and were told they can hang on for 6 weeks.

The Primitive Gatherings you visited is a sister store to Lisa Bongean's Wisconsin store, which the Google says is located at 8567 South Loop Rd, Larsen, WI 54947. It's new and huge. Thought you might find yourselves in the area while on vacation. She also has a presence on You Tube and Instagram (and probably Facebook, but I'm not a member). --Annette in Omaha

Happy birthdays to all!
Thanks for Waffle! I play Wordle, Quordle, and Octordle (https://octordle.com/) and occasionally Antiwordle (https://www.antiwordle.com/) which is where you try NOT to guess the daily word. (It's harder than you think!)

Happy Birthday to Mike and Happy Mother’s Day to you !

I love how the polaroid quilt is coming. We have been cold - cold enough today that I thought it might snow! I don't play the word games, but I do a stradigy game to work the noggin.

Happy Birthday to Mike and Happy Mother's Day to you. Thanks for the recipe. I occasionally use the low sodium chicken Rice-a-Roni adding leftover cut up chicken or turkey and also adding sweet peas or broccoli to it so it's more like a casserole.

Oh you have given me a wonderful idea as to how I can use some long wornout embroidered pillowcases. I will put them in a quilt! Happy Birthday to Mike! I need to try that chicken recipe. The squash wouldn't go over well here, but Rice-a-Roni is always a favorite. I do Wordle and Quordle most days and now you have got me trying Waffle. Happy Mother's Day! It will be nice to have your family around.

Such a lovely variety of projects to stitch... enjoy!

Hi,
Love all your projects...so pretty. And you have 2 to
help you along...Miss Kitty used to lay on all my quilt
tops when I laid them out on the design floor...now Bob,
our dog does...and he's not small. He's part Mastiff and
Labrador. Have a great day!

Thanks for the chicken recipe, I've copied it and will give it a try. Sounds yummy! Happy family birthdays and mothers day, always great to celebrate, isnt it.