A Pause on Paws

Each day, my activity level increases a little bit. It was good to take a couple of lazy days. I spent some time on my slow-stitching in the morning, and stitched what I could of the first pitcher. It's nice using some different colors again. 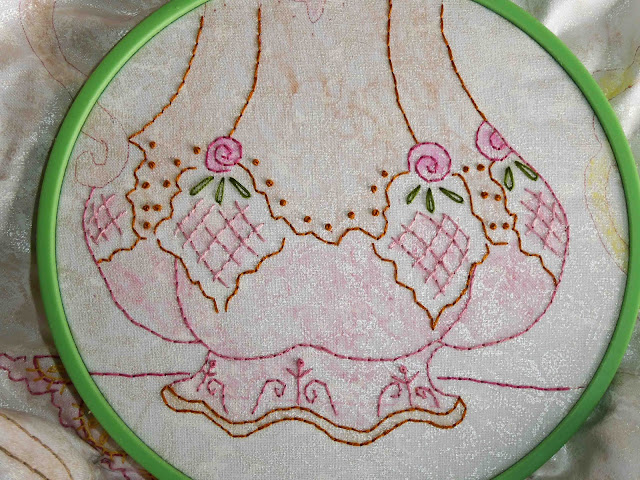 May 1st was the day I set for myself to get some kind of exercise into my routine once again. Ever since breaking my shoulder in December of 2020, I've been pretty sedentary. For a while it was okay to blame my broken shoulder, but those days have passed. The shoulder is about 80% at this point, and surely I can do something, right? Okay, so I spent some time thinking about what I could do that I would actually stick with, and I decided I could tolerate doing 20 minutes on our treadmill, in addition to a strength-training program that starts up today. I read about this "challenge" online, and you can read more about it right here.

In a nutshell, there's an exercise working a different muscle group each day using resistance bands. There is a new exercise every day for five days, and then there are two days off. And, hey...I just happen to have two resistance bands left over from physical therapy. So, I figure this is something I can stick with too. It doesn't require that I leave the house, and it should only take about a half hour each day. I can probably live with that. Since the resistance band portion hadn't started yesterday, I did a plank for 30 seconds. I'll increase my time as I'm able, working up to a goal of holding it for 2 minutes. It'll be good for my abs and lower back. If you're unfamiliar with the plank, here's an image I found online: 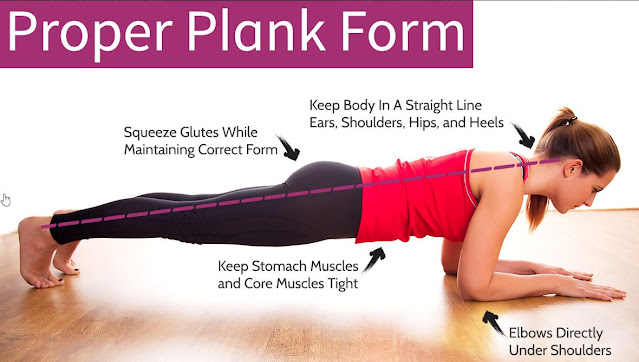 So anyway...I did that. Yay me. And, hold your applause, please. I did some housework too. I know! Crazy! But let's talk about something else, okay? It's okay to do exercise and housework, but we shouldn't dwell on it. Wouldn't you agree?

While I was walking on the treadmill, I was looking out into the yard, which made me want to get out and walk around a little bit while it wasn't raining. Fortunately, I had my trusty guard cat along with me to purrtect me from any lions and tigers we might encounter. 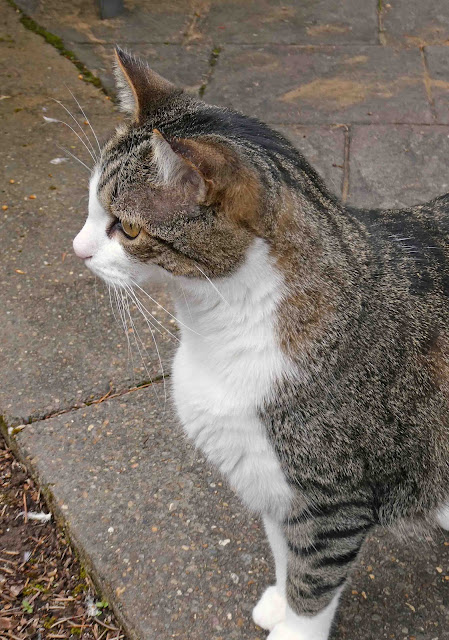 We filled the bird feeders and we took a look at some of the blooming things. These are the volunteer pansies. They are right next to the bleeding heart, and so they too were smashed and buried under wet snow for at least a week. They're still blooming away like champs. 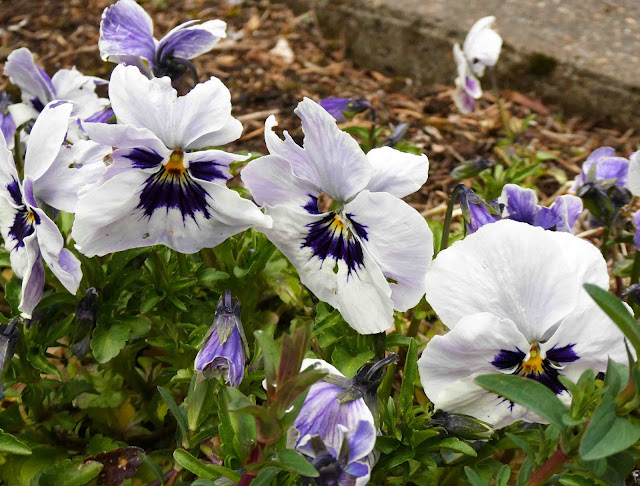 The red tulips by the front door have opened enough... 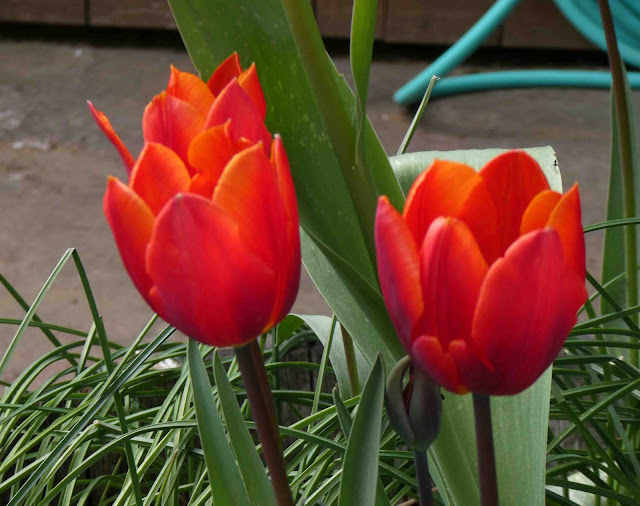 that you can see their insides now. 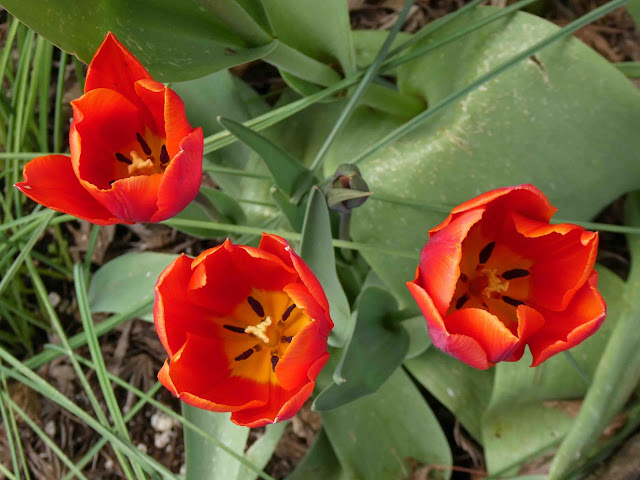 Beside them, the leaves of the wisteria are starting to unfurl. 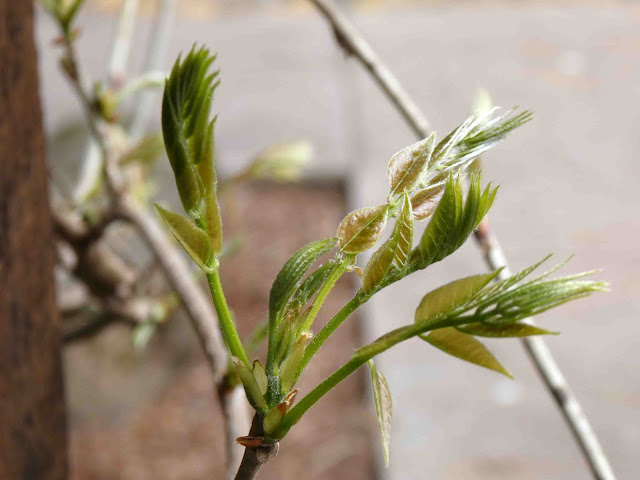 Out in the circle of the driveway, the golden chain tree is beginning to leaf out, and it has some flowers coming too. 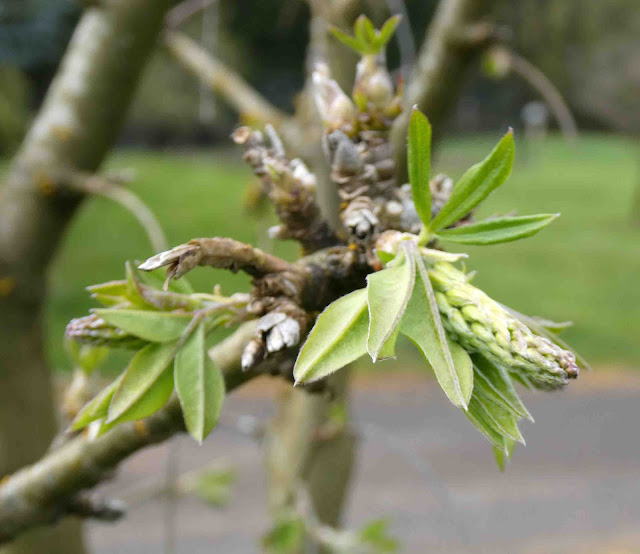 Also, I noticed these tiny wildflowers growing in the field. They are about half the size of a dime. 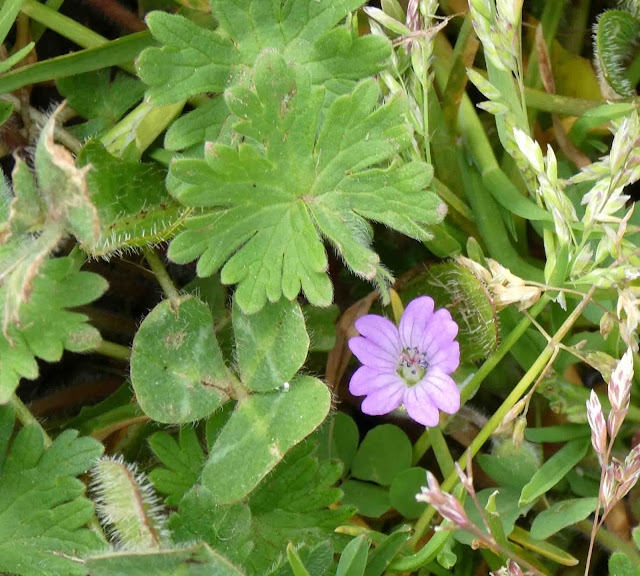 The snow doesn't appear to have done the lilacs any harm either. These are probably a couple of weeks away from blooming, but I was happy to see color in the flower buds. 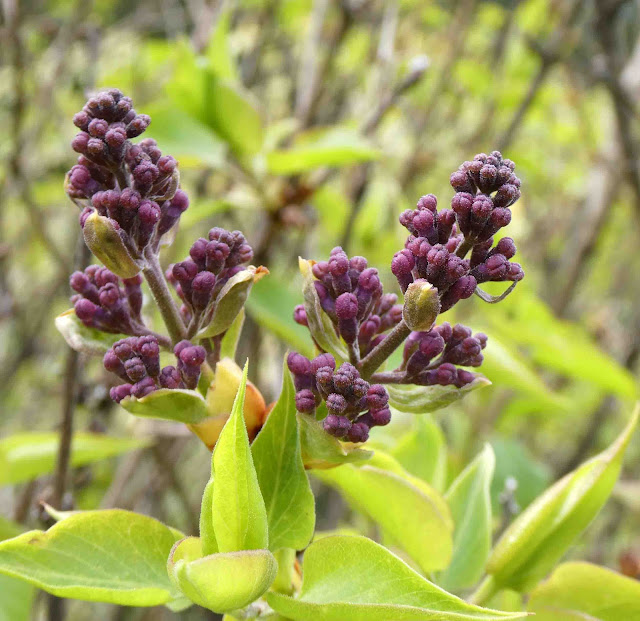 The mint is making a comeback. We used to keep it in the culinary herb garden, but it was so invasive that we took it all out. When it started growing in the whiskey barrel, we decided that was a good place for it. I use it quite a bit in cooking, and so it's nice to have. Also, the bees love it when it blooms. 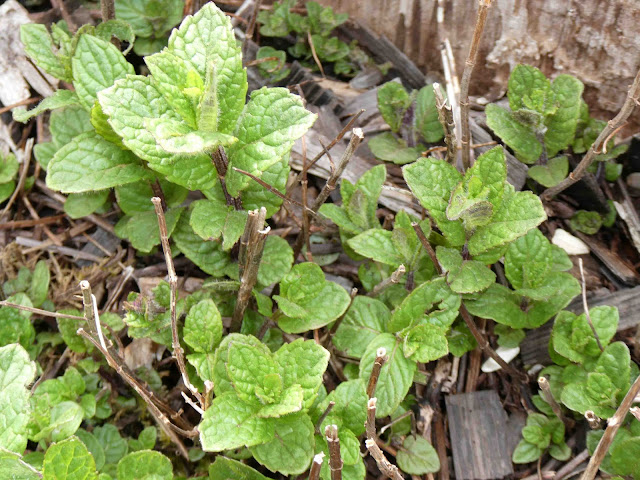 It shares the whiskey barrel with the yellow tulips. These appear to be the kind with the ruffled edges on the petals, as if they've been snipped with pinking shears. 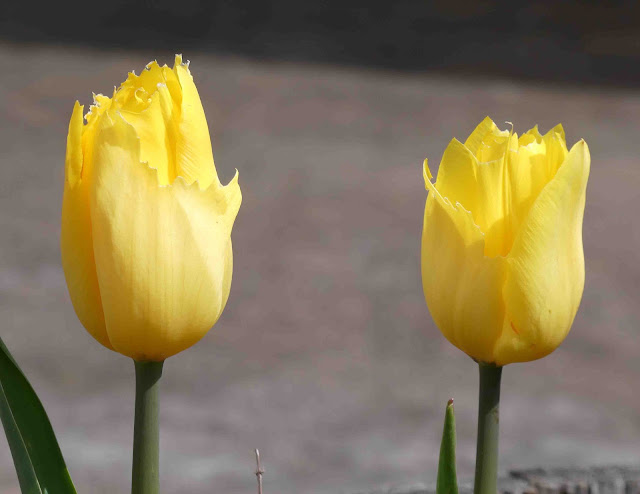 Oh and lookie here! One of the rhododendrons has opened. This flower was pointed straight at the ground, and so I had to get under it to take its picture. 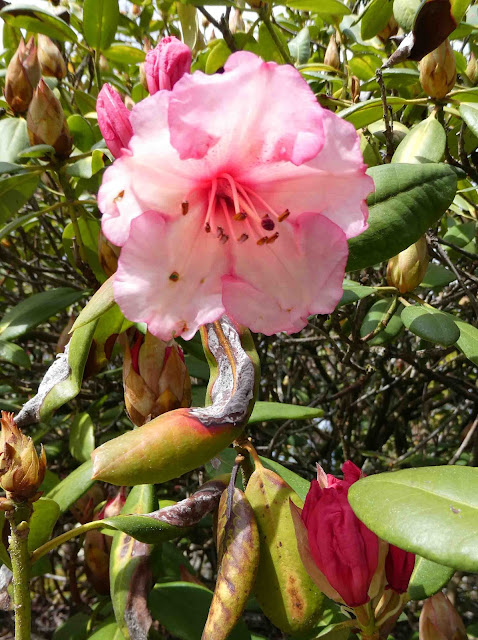 There are lots more coming. 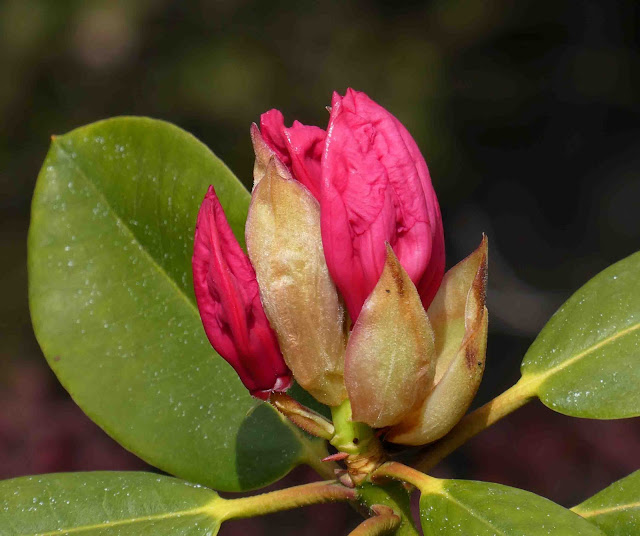 The snow pretty well did in the star magnolia blossoms, but some new ones formed after the snow, and they are taking up the slack. 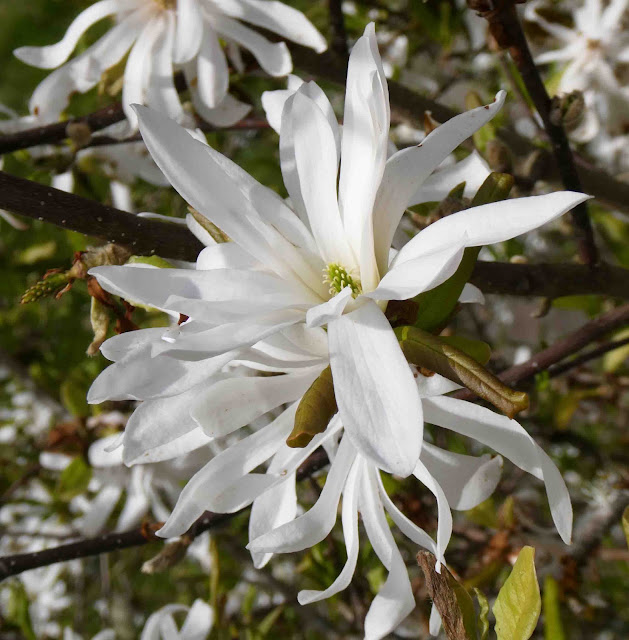 They're so pretty and delicate. I just love them. 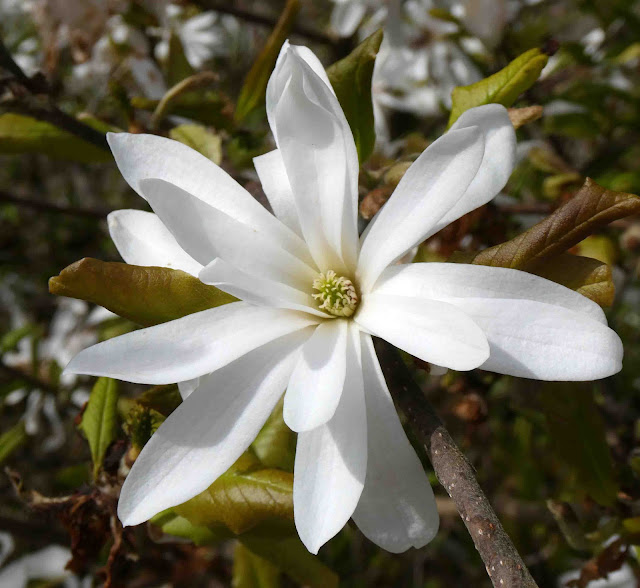 Sadie was with us, but she likes to stick pretty close to the house. One should never get too far from one's kitty treats. 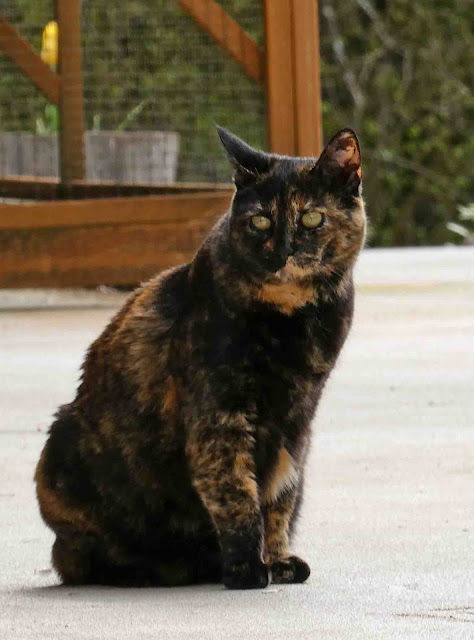 Back inside, I sandwiched the Paws & Purrs quilt for quilting. It's small enough I could do this on the work table in my sewing room. 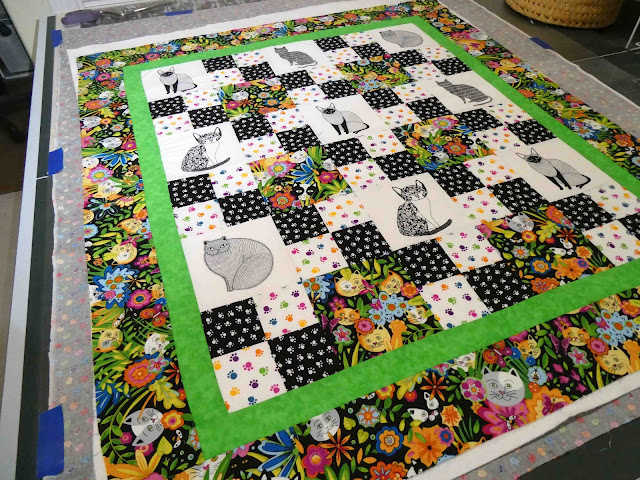 Perusing my wall of thread, I settled on this one... 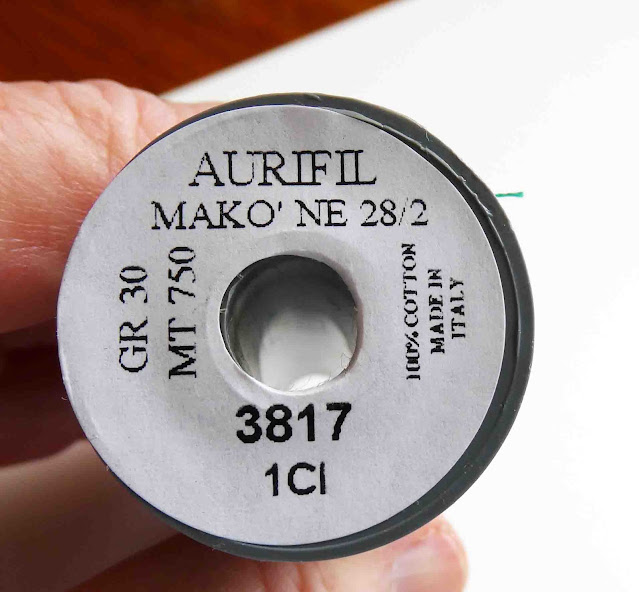 It's a multi-colored variegated thread, and I'll use it both top and bottom. 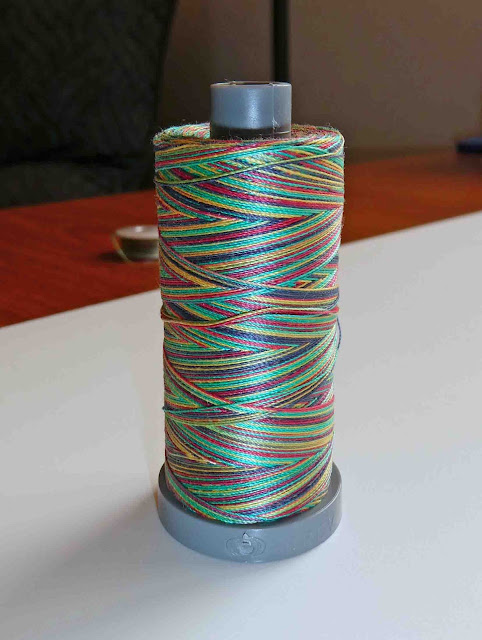 Ordinarily, I would do a small quilt like this on my domestic machine, but I wanted to use this Line Tamer tool that I have. It makes stitching straight lines super easy. 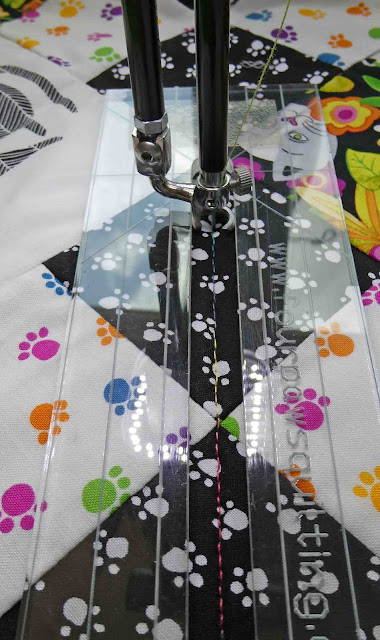 For whatever reason, I was having trouble keeping the foot in the groove as I was sewing. That has never happened before. I tried adjusting the height of the hopping foot, but there doesn't seem to be a way to raise or lower it. (Note to self: try reading the instructions.)
I wasn't in the mood to fight with it, and so I quit after stitching two rows. If I continue to have trouble, I'll just use a marker and mark straight lines on the quilt. It has to be laundered before I send it off anyway, and so that might be the easier way to go. 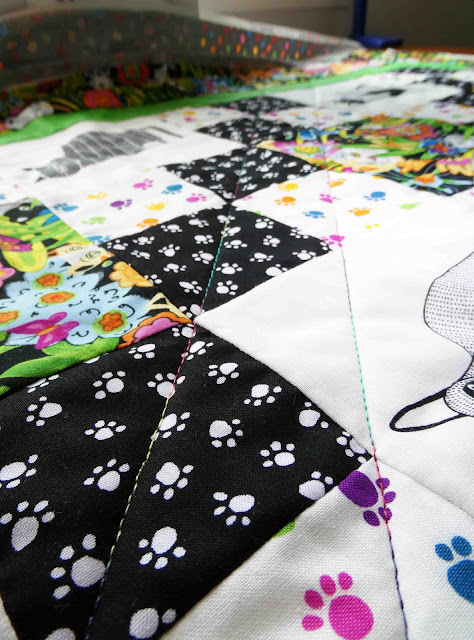 So I just relaxed the rest of the day. This morning I'll get with my exercise program again. I'll get back to my quilting very soon. I'm hoping I can get it to binding stage by the end of the day.
Posted by Barbara at 7:00 AM

Exercise to stimulate, not to annihilate. The world wasn't formed in a day, and neither were we. Set small goals and build upon them. ~ Lee Haney

Good to hear you are getting back on track with normal activities...I am up to 10 minutes on our recumbent bike--and short walkies...progress even if it seems paltry!
Hugs, Julierose

You have some lovely flowers coming up in your garden, keep the photos coming! Meanwhile we have another day of gray skies here, and mud after days of rain. The grass is green, though! I'm not sure I could do a plank, so kudos to you! Once my surgery is done and the weather is warmer, I want to get back into walking daily.

I like your exercise goal. I think I will join you. I haven't done blanks since last year. No excuse for me, other than being lazy. But they do help my back so I'll commit to do them while thinking of you.

I must admit that those plastic rulers scare me because I'm highly suspicious it wouldn't be too hard for the foot to jump out of the groove and land on the hard plastic and do damage. I rely on trusty old painters tape to 'mark' my lines. Not masking tape though, because it can leave a sticky residue.