Welcome to 2022, my friends! I wasn't sure I was going to be able to get online this morning. I started this post yesterday evening, and wasn't able to upload any pictures. This morning, all the yahoos (and their automatic weapons fired off at midnight) are still in bed, and so they aren't hogging all the bandwidth. Not that I would ever hog bandwidth...just sayin'. And this gives me an opportunity to say our internet access could get a little dicey over the next week or so. Tomorrow we'll be heading to a small park in Bakersfield before reaching Lake Skinner Recreation Area, a California state park...or maybe it's a county park...either way. Those are the kinds of areas where we're often in an internet desert. If you don't hear from me for the next week or so, that will be the reason.

But let's back up to our last driving day of 2021. As we left Oroville, we could see the snow-capped mountains off in the distance, and we were glad we weren't there. 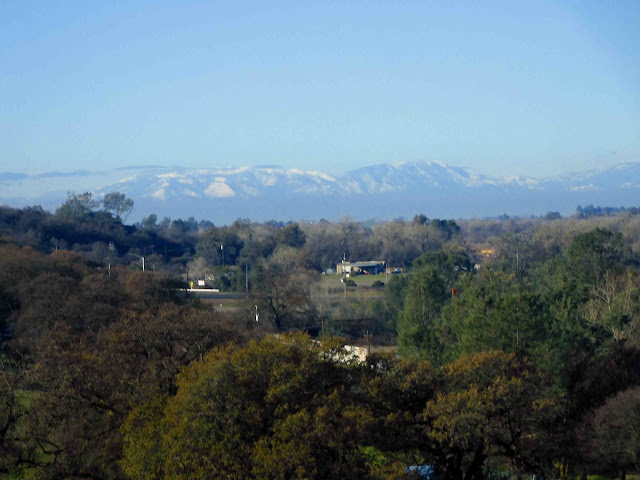 I believe we're really far enough south to avoid snow for the time being. And it was nice to have a sunny day with dry pavement for the whole day. There wasn't much to see...fruit and nut trees lining both sides of the road. Even the barns were hard to come by. They were all hidden behind the trees. 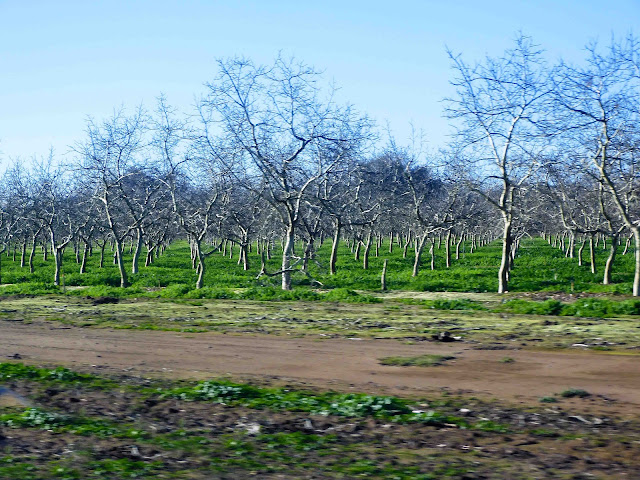 I've been enjoying seeing the bazillions of birds along our route, though. I'm told by those in the know that these are snow geese, with possibly some other kinds of geese mixed in. 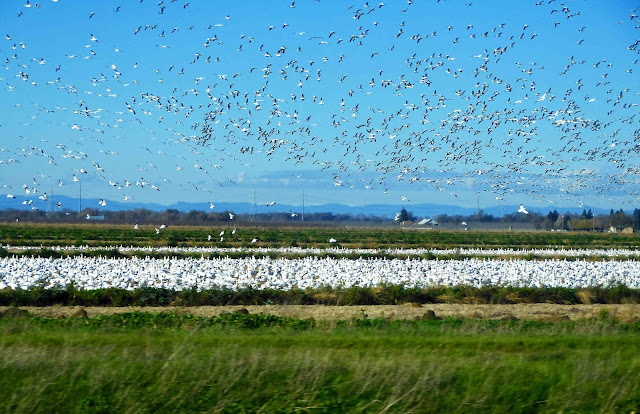 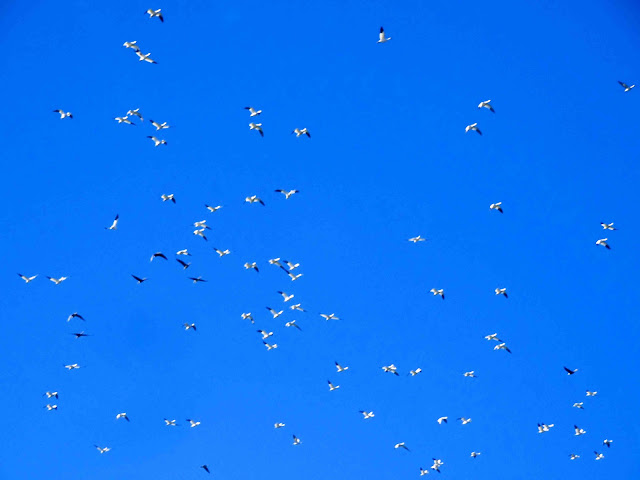 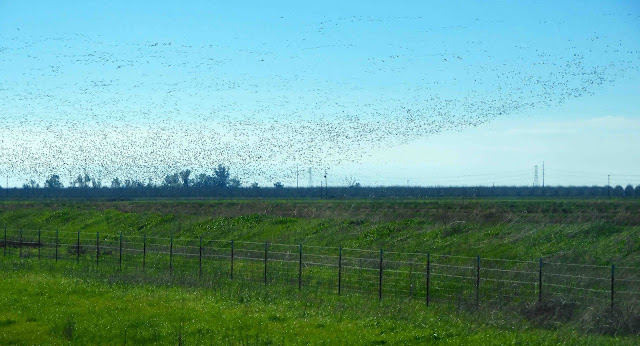 I might have said I thought we were going to make it all the way to SoCal without ever setting tires on Interstate 5. I was wrong. Our navigation unit directed us onto I-5, and I believe I-5 shares the road with CA-99, which would explain it. We dreaded getting on the interstate here because...and I'm sorry to have to say this, California...California drivers are crazy. Especially on the interstate. So Sacramento loomed ahead. 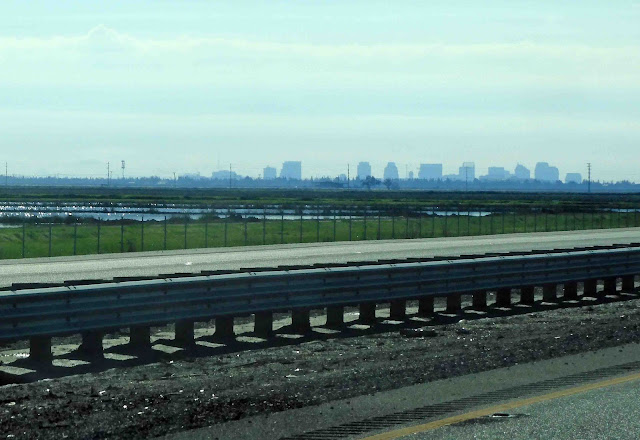 And we ended up right in the thick of it until we reached Stockton and were able to get off again. Phew! 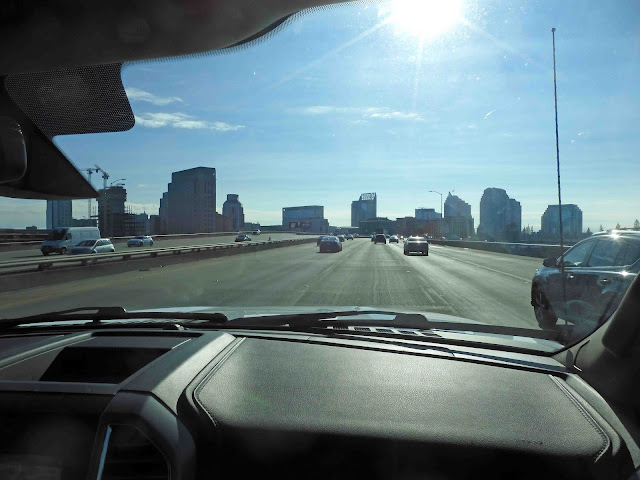 This RV park calls itself a "resort." And I'll just say that using the word "resort" has one "resorting" to wishful thinking. It *is* right alongside the Merced River, however, and that part is very pretty. 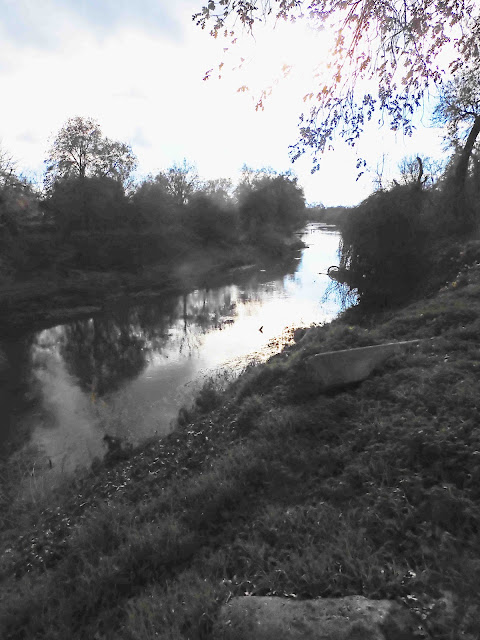 Looking in the other direction, it looks like this: 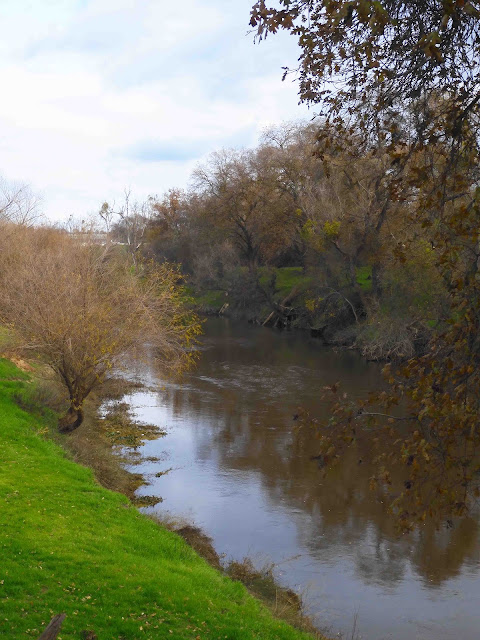 The bright sunshine had everything faded to black in my image, but here, I looked in the other direction again. I like the reflection of the sky on the river, even if everything else is in silhouette. 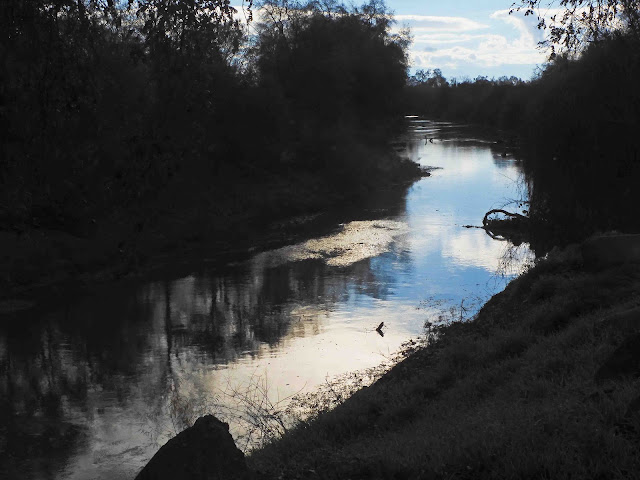 So, I don't have much else to tell you about yesterday. I started the second of nine basket blocks. This one will go faster than the previous one. 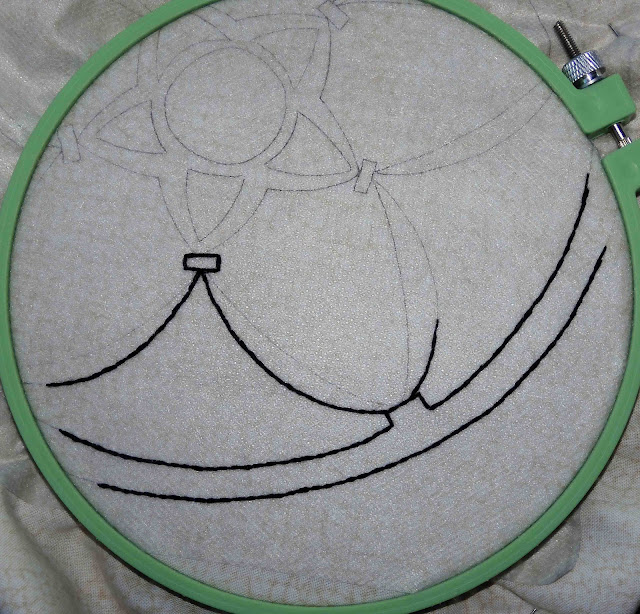 Today we're meeting up with my bird-loving friend from high school, Judy. We should see *lots* more birds today at the Merced National Wildlife Refuge. Internet or no, I'll be back eventually to tell you all about it, even if I have to do a time traveling post.
There are no New Year's Resolutions at this end, except to keep on my quest to hit my weight loss goal. Mike and I started on this quest back in 2017. I lost 21 pounds before we headed out on our USA Perimeter tour, and the diet fell by the wayside. After that, I regained 10 lbs., but now I've lost another 15, for a total weight loss of 26 pounds since 2017. I'm about 13 pounds from my goal, and those pounds are coming off painfully slowly. So, I'm determined to get there this time, and I'm hoping to work more activity into my day. If it's a resolution, then I started it back in July. I don't think it counts.
Okay, that's it from the Traveling Three Cats Ranch. I'm hoping to be back tomorrow with lots of pictures to show you.
Posted by Barbara at 7:23 AM

A New Year's resolution is something that goes in one year and out the other. ~ Unknown

Seeing that many snow geese is awe-inspiring. I've only ever seen them once and that was when we were driving through Saskatchewan in the first snow/wind storm of the year and we drove by fields filled with the birds. We couldn't even begin to take our eyes off the road long enough to really see them, much less take pictures. When the wind was blowing big rigs right off the highway paying attention to the road was higher on the list of priorities than admiring birds.
Happy New Year - stay safe!

What a wonderful treat to see this many snow geese at once. I have only seen 1 or 2 at a time, and that was in a refuge.

I would like to see bazillions of birds again. I had wondered where they all went.

I agree that California drivers are crazy. The only time I've been in California traffic was on a trip where we drove from Palm Springs to San Bernadino. We still shudder when we talk about that drive. Looking forward to hearing about your birding adventures!

Happy New Year Barbara! It's always fun to see your traveling posts. I often share them with My Guy to convince him that we should really visit a state he's taken off the list of possibles (he hates California, mainly because he's only visited our facilities which are in San Francisco and LA). I hope you get good weather for the rest of this week, with no rain, but maybe a bit of cloud cover to get the best photographs. Happy travels!

Might the forgotten name of the wading birds be Black-Necked Stilts?