Since arriving in Escondido (and before), we've had the pleasure of meeting up with some of our oldest and dearest friends...oldest because we've known them a long time...not because they're actually old, as I'm sure you can understand. To admit that our friends are old would imply that we, ourselves, are also old, which is obviously unacceptable. Possibly this whole paragraph would fall under the heading of "The lady doth protest too much, methinks," but that would be beside the point. The point is that we needed a day to hang out and chill.
Smitty is very good at this. He donned his activewear and got outside for a short walk. 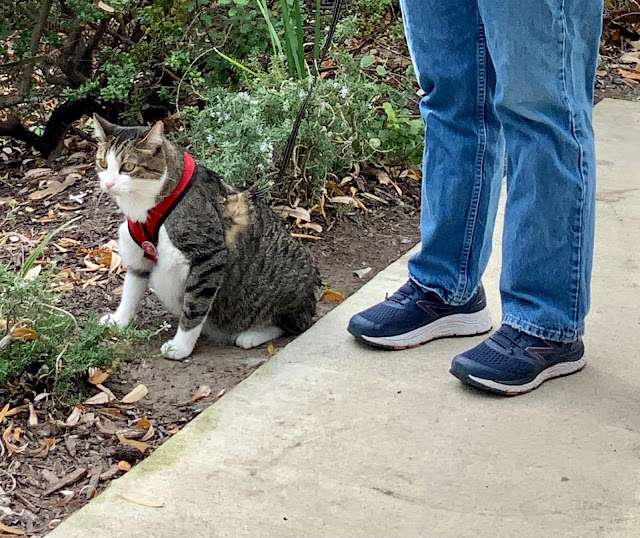 It could be that his walking days here are coming to a close. Yesterday there was a cat running loose all around our campsite, and both kitties were all a-twitter about it. If you're a long-time reader, you might know that Smitty is a territorial boy and this brings out the worst in him. Just like the mild mannered Bruce Banner turned into the Incredible Hulk when something got his hackles up, Smitty has been known to turn into the Incredible Fang when strange cats enter his territory. On a previous trip, he gave me a pretty serious bite when he encountered a strange cat nearby...it's a scene I'd rather not repeat. So, we'll see. This might be Smitty's last walk until we get to Boulder City next week.
Before our walk, I got started on the fourth basket for the Blackwork Baskets quilt. 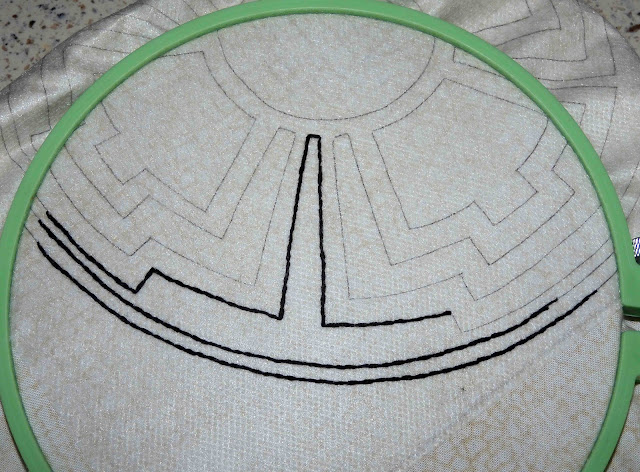 And it seemed like a good day for a skillet cookie. I've called this a cookie for two, but it's actually a cookie for four. To avoid completely blowing our diet, I wrapped up half of it and stuck it in the freezer. We felt free to consume the other half with a scoop of ice cream yesterday afternoon. 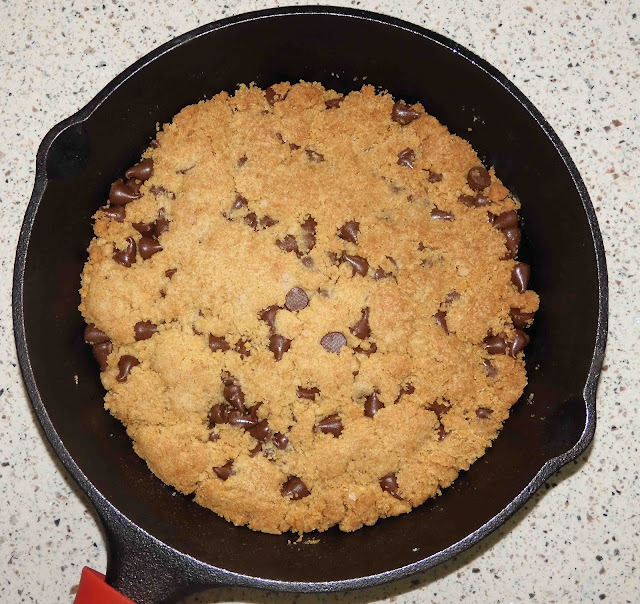 I've shared the recipe for this, but I'm rethinking it for the next time I make it. For one thing, I'm using a larger skillet than the one called for in the recipe, but the batter ends up being rather stiff and difficult to mix. Sometimes cutting a recipe down to size means coming up with half an egg. In this case, the original recipe calls for using just the egg yolk. I'm thinking I'd like to try using the whole egg next time. It might mean a more moist and easy-to-mix batter, and it probably wouldn't hurt anything. I've written myself a note to try this next time I bake it. And if you think about it, it's a genius excuse for making another one, isn't it? (Thinking. The woman is always thinking.)
Okay, well, by then, it was time to set up the sewing machine. Smitty helped me with my sewing yesterday. You can see that he's going at this "chill day" for all he's worth. 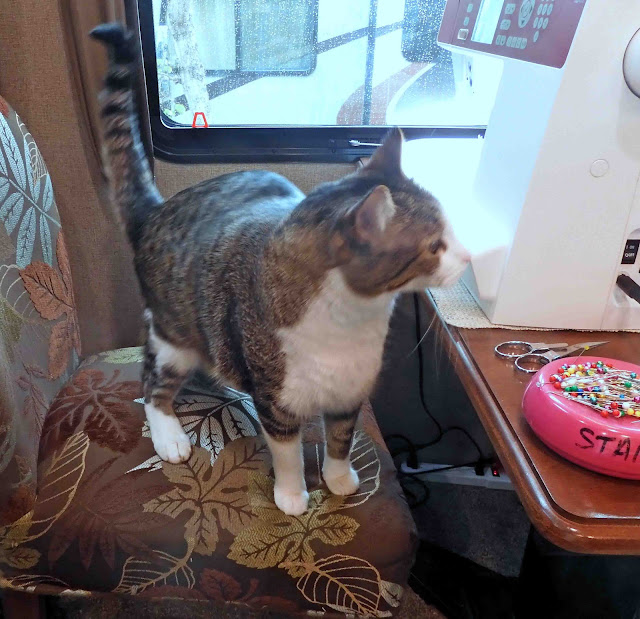 Together we sewed together the top half of the Posies quilt. 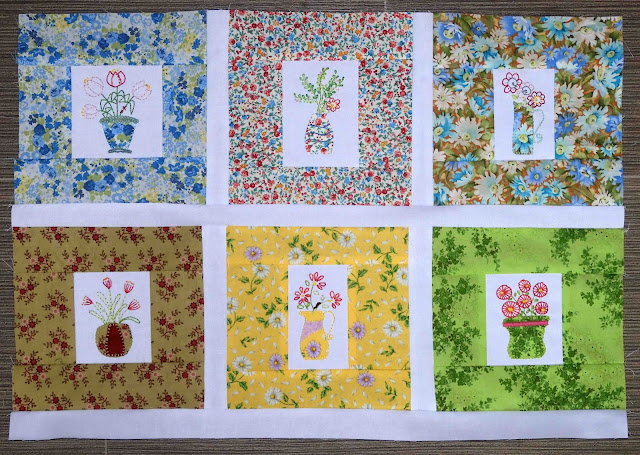 I stopped for lunch then. Smitty was so exhausted at all the chilling he was doing that he needed to take a nap. 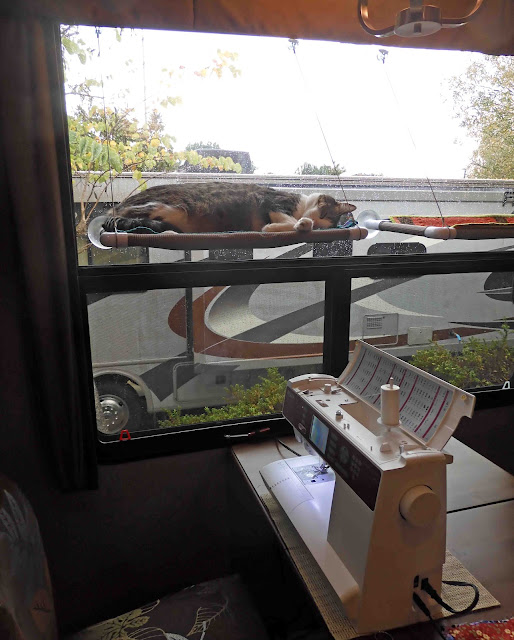 After lunch, I soldiered on, finishing sewing the rest of the blocks together by myself. 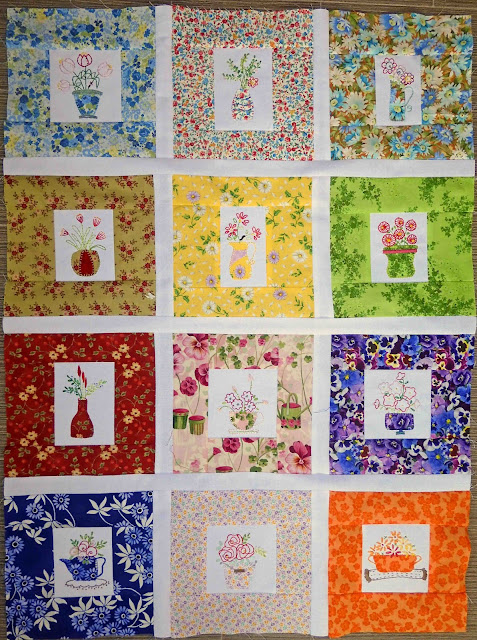 There are still two borders to add. I considered getting started on them, but in my logical mind, I knew I couldn't sew just one on without sewing the other on. And both borders seemed like too much a commitment. So I decided to stop there and sew the borders on a different day. It won't be today, though. Mike's sister is coming down from Fullerton to spend the day with us. We were hoping to do something outside with her, but it doesn't look like the weather will cooperate for that. We'll head out for lunch and dinner, and then reassess when the day gets under way. There's always hope the sun will come out later.
Okay, so that's yesterday and today's agenda. Fingers crossed for that sunshine. Possibly if we all cross our fingers, the weather will improve.
Posted by Barbara at 7:03 AM

The thing is, when you see your old friends, you come face to face with yourself. I run into someone I've known for 40 or 50 years, and they're old. And I suddenly realize I'm old. It comes as an enormous shock to me. ~ Polly Bergen

Really cute quilt top with the embroidered posies and the pretty bright colors. Smitty probably needed that nap after protecting you from a strange cat on your walk.

My brother-in-law's cat used to come visit every day. He would sit under a window or by the patio door and my cat would howl at him. My husband interrupted that howling one day and got a bad bite for his efforts. He ended up pretty sick with cat scratch fever. After that he just let them howl and hiss, and not get too close.

Our cat Gemma hisses at the next door cat through the fence, that's as close as they have got. I tried your red onion pickle recipe yesterday, very nice indeed as a salad extra, and so very simple! Thanks for sharing. I'm enjoying following you on your current trip around.

It looks like you've got your sewing set up working well. Enjoy your time with Mike's sister!

I like the posies - they made me think that the vases were cut outs rather than appliques. A welcome optical illusion.
The cookie looks so tasty! Not good for my diet though.

The posies quilt top is very cute and as for the cookie mmm yummy.