The kitties are such old hands at traveling these days, they don't even budge when we start to bring in the camper slides. Smitty was napping on one of the chairs. This is a slide that comes in. Directly opposite, the kitchen slide also comes in until it nearly touches where Smitty was snoozing. He looked up and yawned and then went back to sleep. Booorrrrrrring. 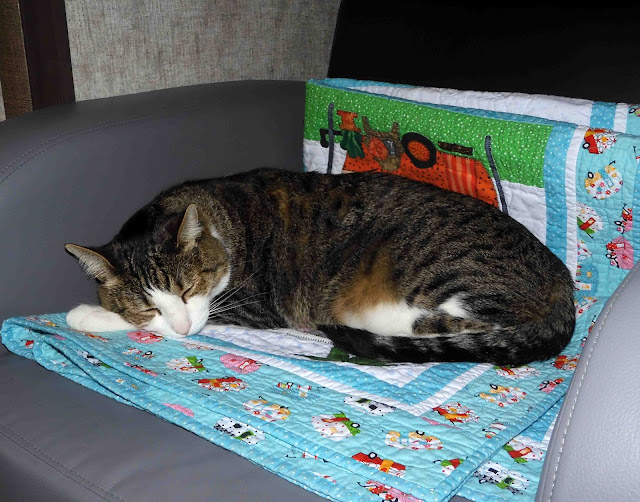 Sadie hops up into the small space of her cubby. She feels secure in the confined space, and she sleeps while we go down the road. 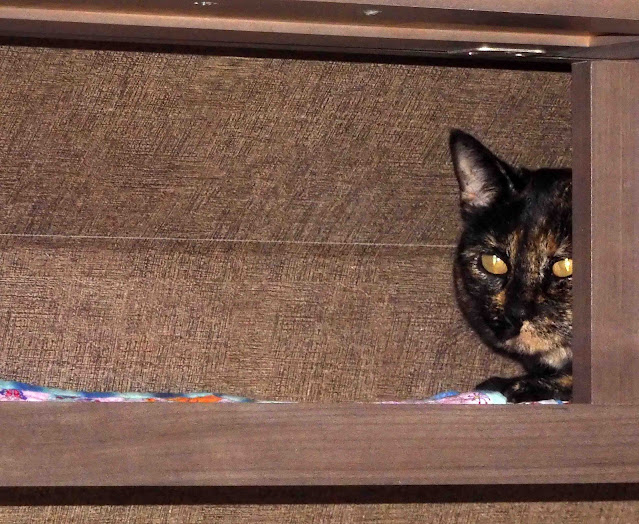 Before we left, I had time to finish up the fifth thimble. It's still not rinsed or pressed. I kind of like this one. 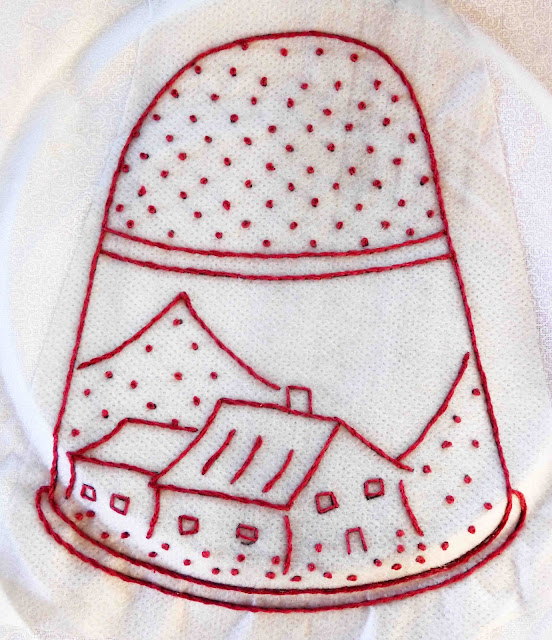 After we arrived here in Bernalillo, I started on the sixth one. When that one is finished, they will be half done. We're more than halfway into our trip, and so I think I'm safe with these until we get home.

The drive was much more interesting yesterday than expected. We'd already driven the distance between Bloomfield and Chaco Culture NHP, and found it flat and desolate. Beyond was a changing landscape, and it felt as if we'd seen everything New Mexico has to offer by the time we reached our final destination. 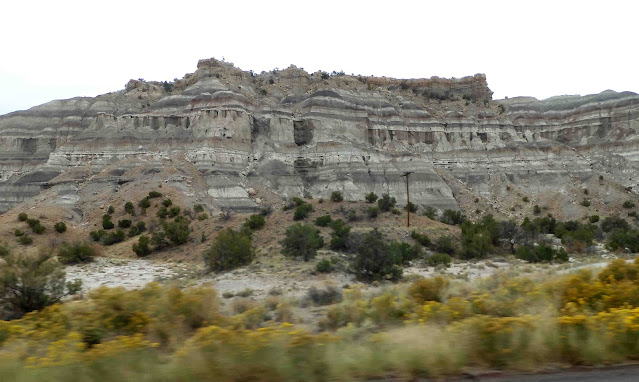 It was cloudy for most of our drive, and we got into a little bit of rain. You can see the sprinkles on the windshield. 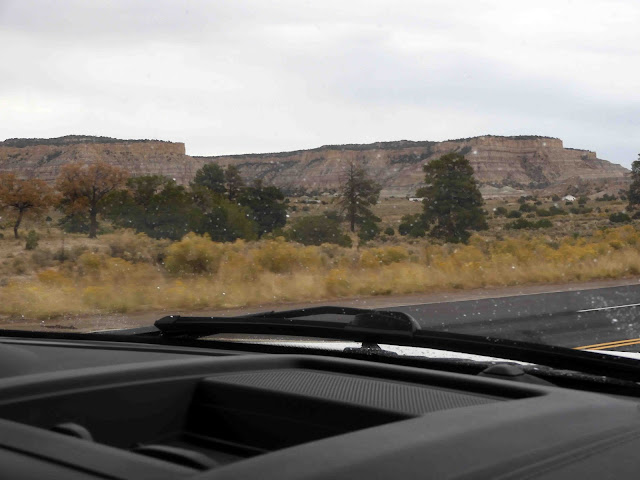 About an hour into our approximate 3-hour drive, we started seeing more trees in this forested area. 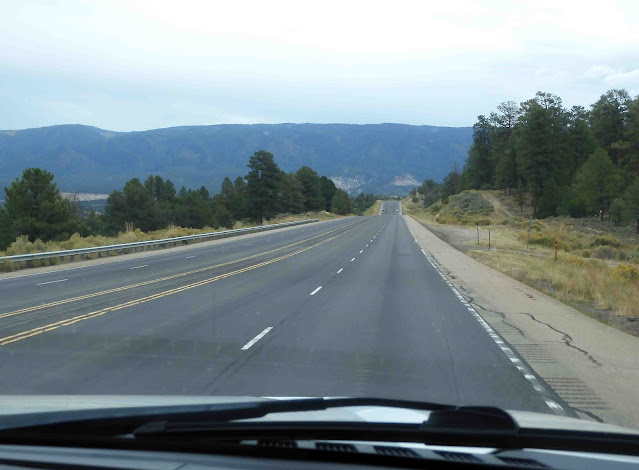 Mike was getting sleepy on this long, straight road. We found this coffee stand, called "Juicy Jitters," along the highway. There was a lot of funky art work around this place. I would have liked to get out and explore, but it was someone's private residence. This was clearly a person who enjoyed upcycled art. 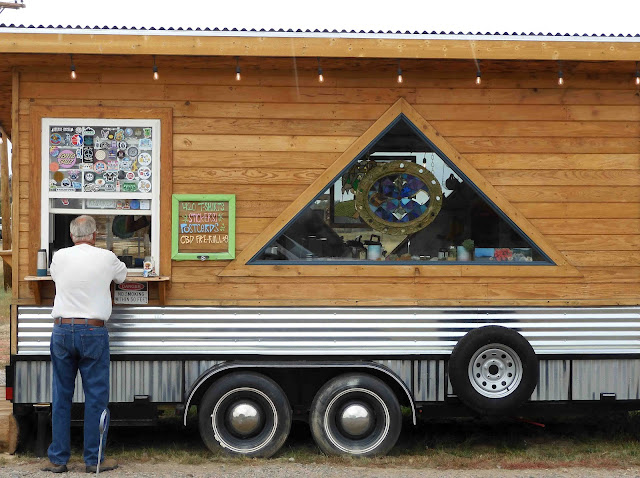 It was located in the tiny town of Cuba, New Mexico. In the 2010 census, the town had a population of 735 and encompassed a whopping 1.3 square miles. As we drove off, I noticed this historical marker: 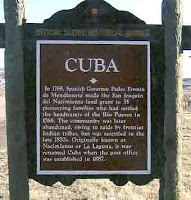 I swiped that photo off the internet, and I can't make it any larger. It's a little hard to read, so here's what it says:

In 1769, Governor Pedro Fermin de Mendinueta made the San Joaquin del Nacimiento land grants to 35 pioneering families who had settled the headwaters of the Rio Puerco in 1766. The community was later abandoned, owing to raids by frontier Indian tribes, but was resettled in the late 1870's. Originally known as Nacimiento or La Laguna, it was renamed Cuba when the post office was established in 1887.

You can read more about the town right here. And just FYI, in 2005 and 2019, the National Christmas Tree was harvested from the Santa Fe National Forest near Cuba. Kind of makes you want to treat the little place with more respect, doesn't it?
About an hour outside of Bernalillo, we started seeing these little "cinder cones," indicating a volcanic past. 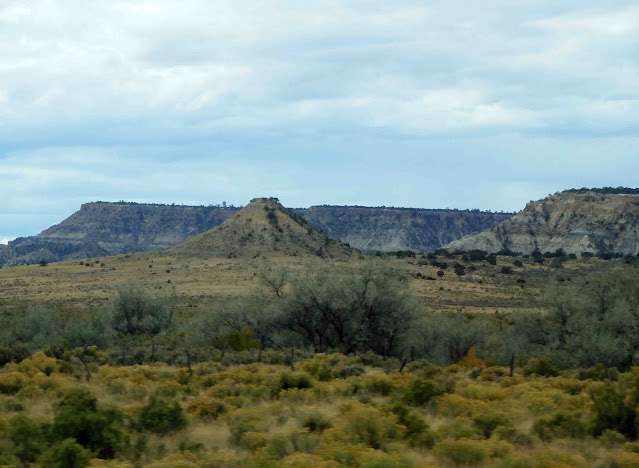 Here's a better shot of the same cone without all the background noise. 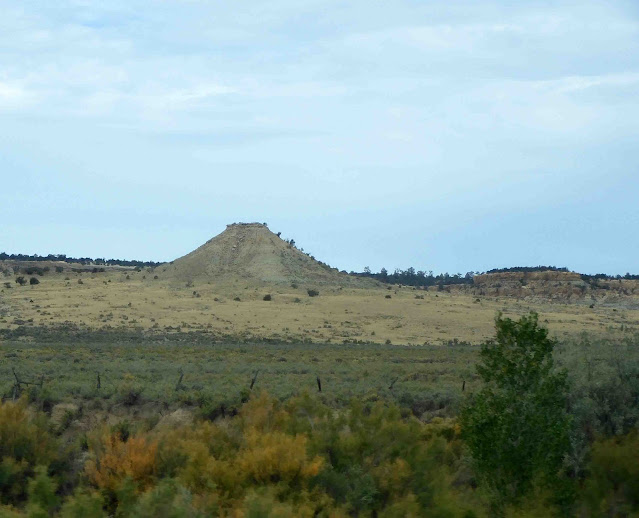 Just a few miles down the road, we saw this much larger one. 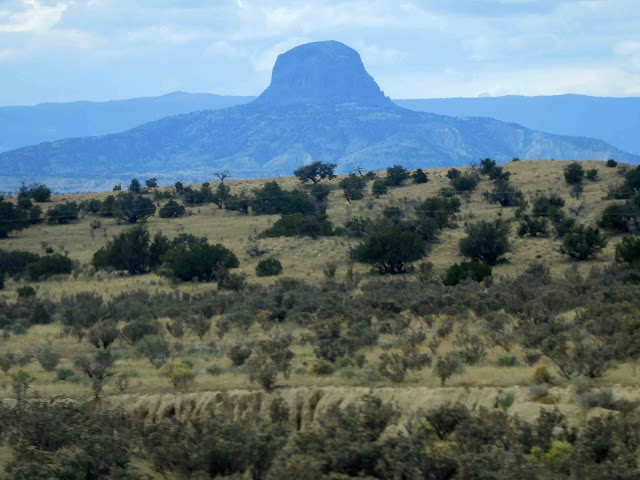 Okay, so I had to inquire of my friend, The Google, to see what this was all about. The one above is known as Cabezon Peak. According to Wikipedia, it's a large volcanic plug rising 7,785 feet (2,373 meters) in elevation, and nearly 2,000 feet above the floor of the Rio Puerco Valley. The volcanic neck is formed of basalt and is part of the Mount Taylor volcanic field. A volcanic neck or plug is formed when magma from an existing volcano solidifies in the pipe or neck and the surrounding sediment is eroded away. There were more neighbors in the surrounding area. You can take a tour at the link I've given you back there. 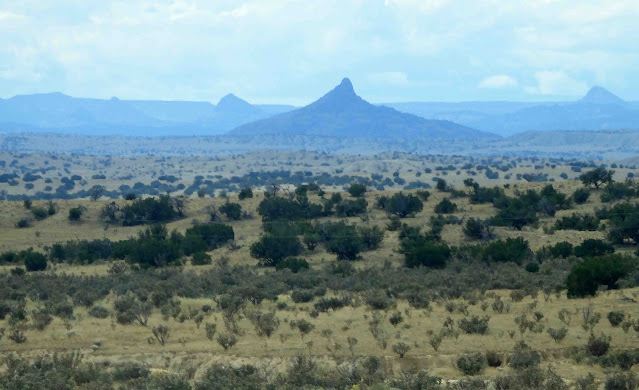 Moving on, and just a few miles north of our final destination the rocks turned red...like flipping a switch almost. 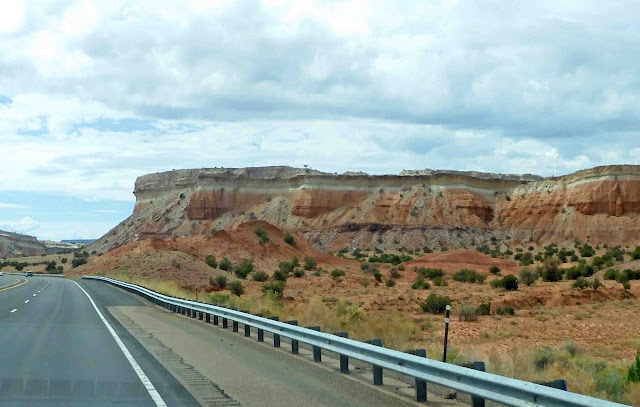 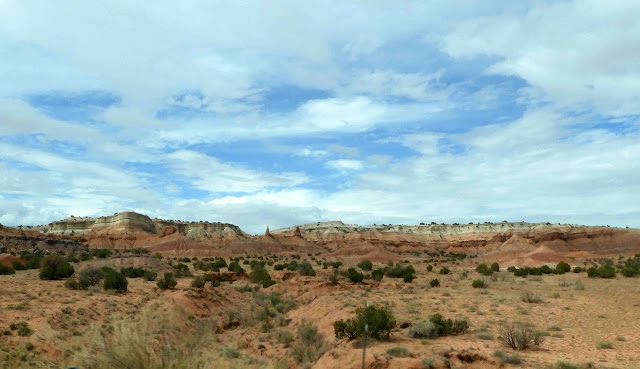 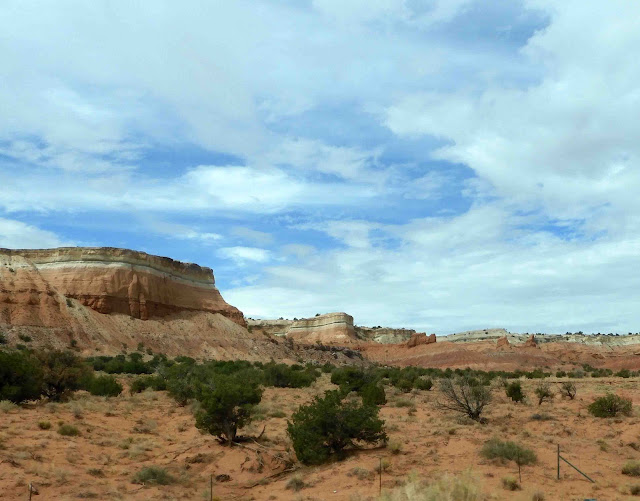 And just look at the top of those bands of color. Just a little way down, is a narrow band of dark gray. When I see stuff like this, it makes me wonder...what happened there millennia ago? It's red, red, red, and then all of a sudden much lighter. Then, dark, and then light again. So what happened there? I have questions, but no answers. I suspect it's the same period in which those volcanic plugs were formed. 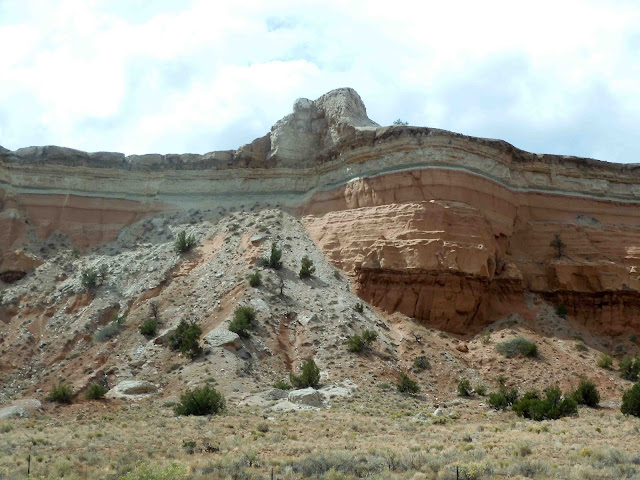 As we neared Bernalillo, we could see the Sandia mountains ahead. This is a ski area. 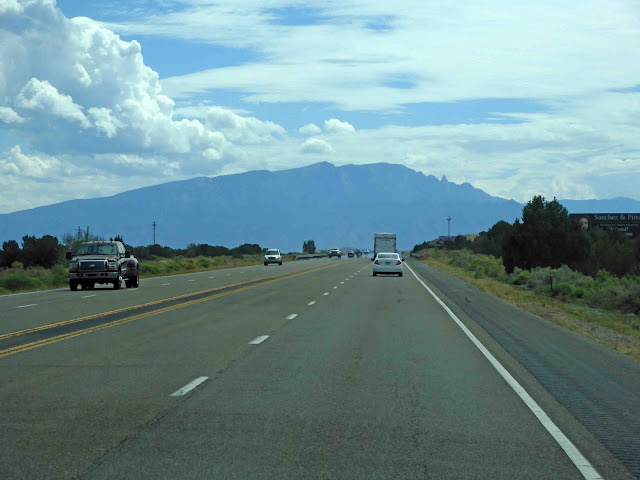 After heading through some major road construction, we finally reached our campground. No worries forgetting what city we're in since the name can be seen displayed right from our campsite. 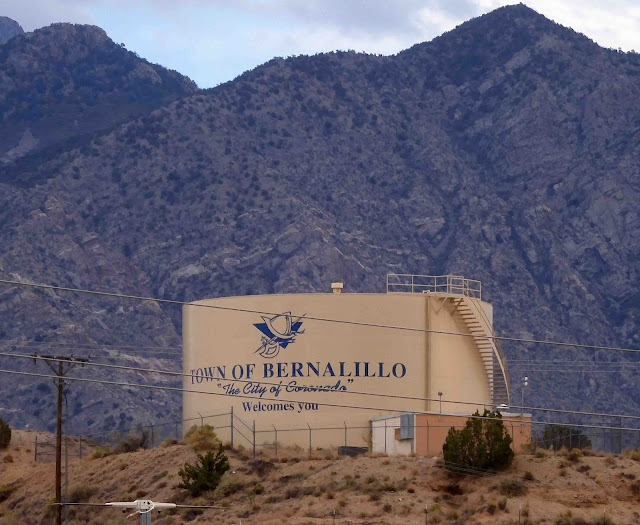 It was a relatively short day of driving, but still tiring. Once we were set up, Smitty joined us on the veranda for a tasty refreshing beverage. 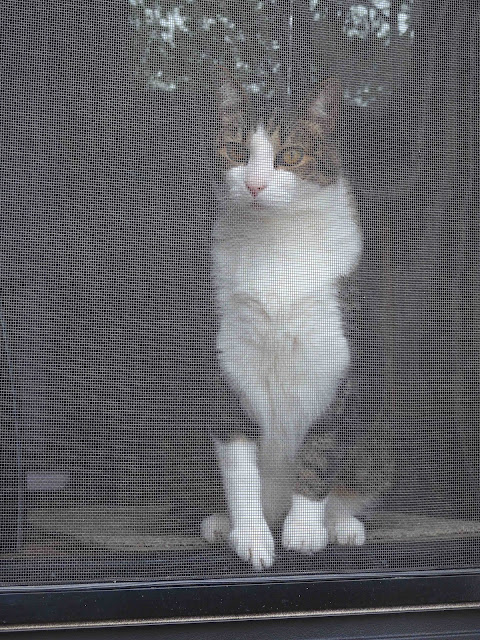 We're only here for two nights, but we've packed a lot into this short visit. We met up with an online friend and former blogger last night. Tonight, we'll meet up with a friend from high school. This afternoon, we'll visit the Kasha-Katuwe Tent Rocks National Monument. So you can see we won't lack for things to do. After this, we might need a vacation from our vacation.

Oh yes, and I mustn't forget...Mike uploaded the drone footage from our visit to the Bisti Badlands the previous day. Take a look. And if you can't see the video, then click right here.

And that's all I have for you this morning. After a quick breakfast, we'll be on our way to do some more exploring. My thanks go to my friend Nancy who reminded me of the looming government shut-down. (Sigh.) We were only planning to stay one night at Great Basin National Park on the 13th. (Figures, doesn't it? I might have thought it fell on a Friday, but no.) In the event the government shuts down, national parks will be closed. I'm hoping our idiotic wise government officials will come to their senses before then. Just in case, we scouted out some alternatives, if necessary. Let's all cross our collective fingers and hope it doesn't come to that, okay?

Zeal is a volcano, the peak of which the grass of indecisiveness does not grow. ~ Khalil Gibran

I really enjoyed Mike's drone video of the Badlands. Thank you both for sharing. Badlands certainly is a perfect name for that area. With respect to the possible Government shutdown I had not thought about the National Parks closing. Like you, I hope there isn't a government shutdown and the politicians can get their act together. I hate to get into politics, but this is really getting to be an annual problem where no one wins.

Mike's drone footage is fantastic! I've watched it twice as the rock formations are so interesting. Thank you for taking us along on your trip. Back home we are getting a good dose of rain today to help the fall garden and green up our parched fields. The fall strawberry crop is loving the cooler weather. Safe travels to you both.

The changes in the landscape are pretty amazing. Love all that red color! We took the Sandia Mountain Tramway years ago while visiting Albuquerque, the views were amazing. Hope you are able to stay at the national park. Sheesh.

Great drone viewing of the Badlands. I hope the government doesn't shut down either since on of my nephews works for NOAA and he doesn't get paid during the shutdown. The red and white and tan layers in the landscape remind me of agate rocks.

You take the most amazing trips.

Amazing drone footage Mike. And thank you Barbara for posting it. I am so enjoying this trip :-)

I love all the red in the landscapes, makes it so interesting. Fun to see what the drone saw:)

I'm in awe of the buildings from the past. I am loving the travellogue pictures and drone footage. As others have said THANK YOU, these are areas I'll never see in person. Thye panos were amazing. As always a few well deserved scritches fir the kitties.

More amazing landscapes and so colorful too. I don't want to know why the government is considering shutting down - I'm sure it will only upset me.

I'm loving your embroidered thimble project (and your travelogue). I have two antique silver thimbles that have been handed down to me with a house and landscape etched into them. They are such small lovely treasures for someone who sews. Safe travels.