Aside from gardening activities, my Sunday was a relaxing day with plenty of time for sewing. I had the Quilt Shop redwork spread out on my work table, and so I sandwiched that for quilting. 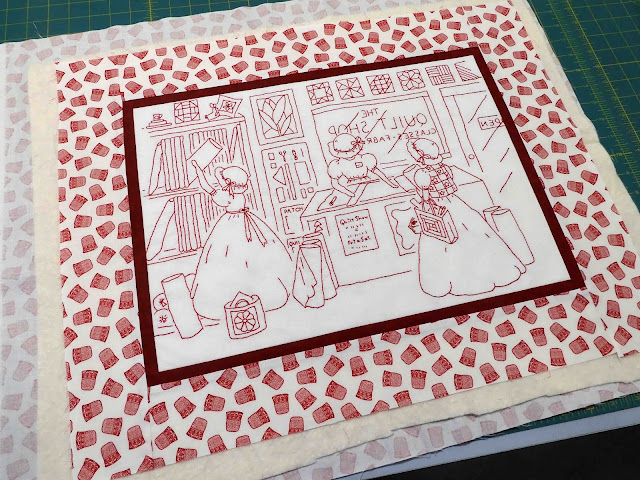 Now it's ready go to, but probably I won't get started on this right away because the new theme for The Endeavourers has been announced. Our new prompt is "quilts inspired by a newspaper headline." I like that a list of themes is generated at the beginning of each year so that we have an idea what's coming up. I'm not one to procrastinate when there's a deadline looming, and so I'm always thinking about what lies ahead, even if it's not directly in front of me. I already know what I'm going to do for the new theme. The reveal is November 1st. Since we'll be traveling for 6 weeks between now and then, I'll need to try to get mine finished right away. I'll start on that today.
But continuing on with yesterday's activities, the new block for the Posies quilt was released yesterday. Yay! I love working on these. Combining it with the RSC color of the month, aqua, I prepared my block for embroidery. I was reaching a little with this aqua fabric. It has aqua in it, but it's treading perilously close to blue. Oh well. I'm working from scraps, and so there you go. 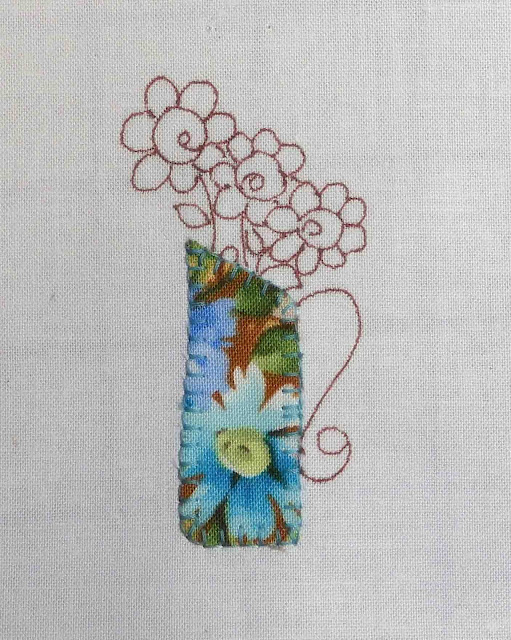 It took about an hour and I had the whole thing stitched. 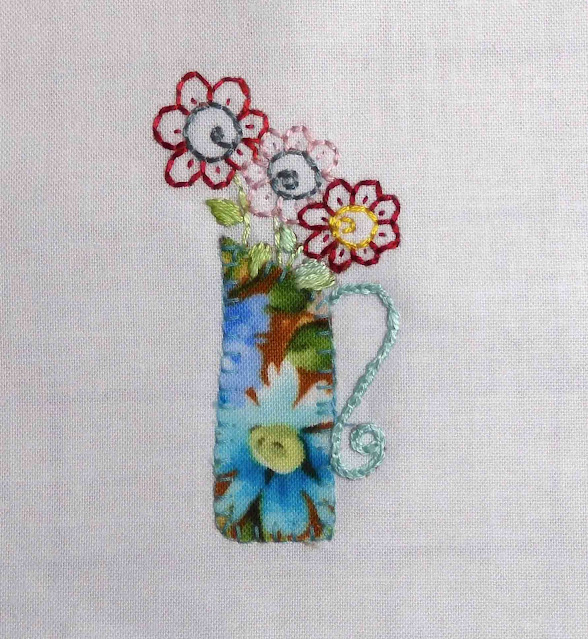 All that was left was to add the borders, and August's block was finished. Such a fleeting moment of stitching joy. Now I have to wait all the way to September 1st for the next one. 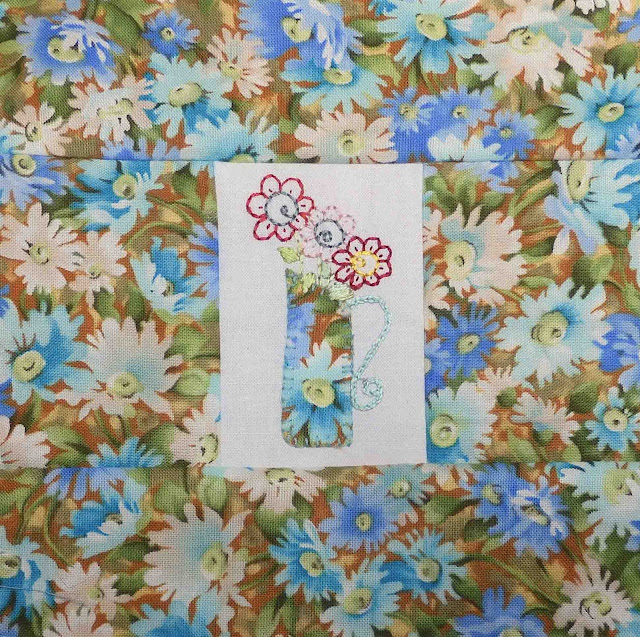 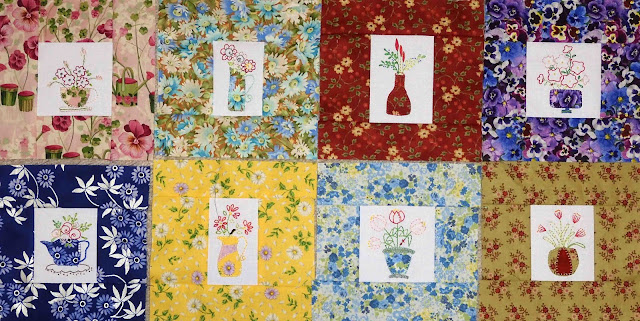 From there, I did some more quilting on the Dream Big Panel. The outer reaches include oddly shaped petals, and I've reached the place where it's harder to discern the edges. I stitched this first one with a pretty simple design. 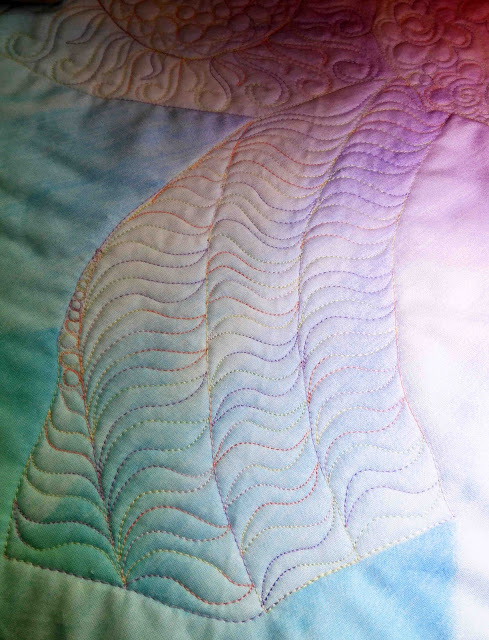 Then another oddly shaped one. 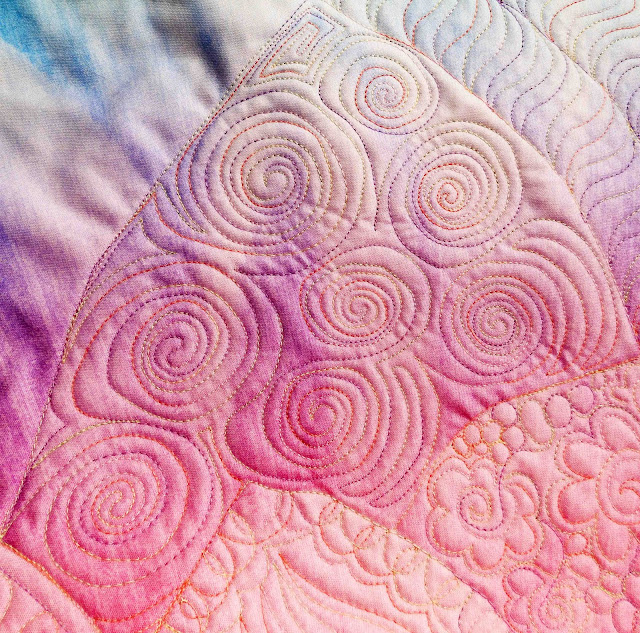 And unless I've missed something, everything else will take me to the selvage edge. There was enough room here to do some more McTavishing. I'm realizing I really like those closely spaced, echoing lines. 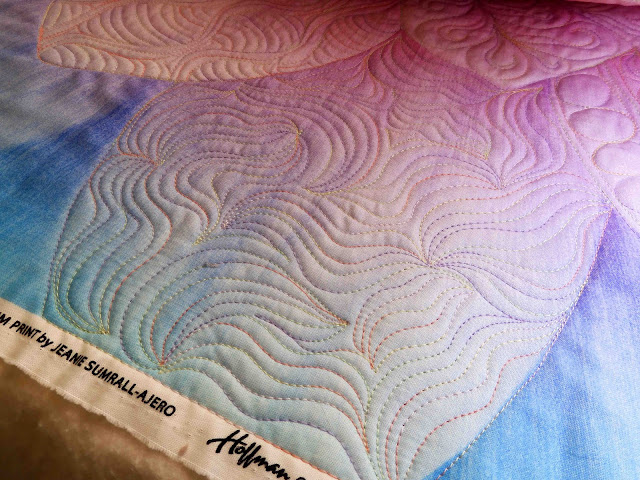 Now I'll just be filling in around the outer edges. There are some boundaries to the shapes, but they no longer resemble petals or leaves. 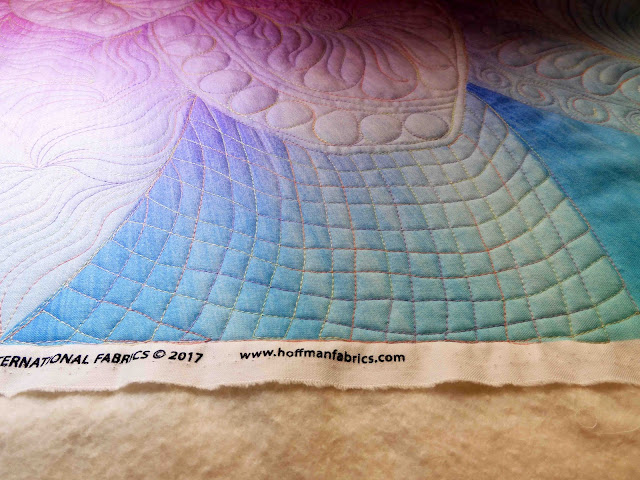 Some of the areas are quite small too. 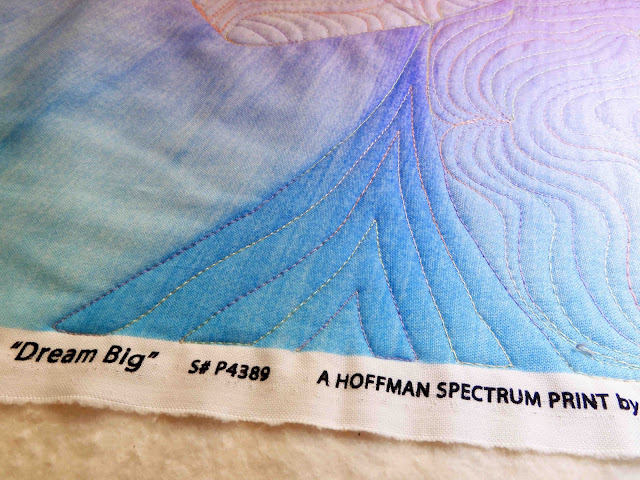 I'll keep working on this a little at a time. Now I'll just be making my way around the outer edges until it's all filled in. Then, it will be ready for binding. It occurs to me this piece will make a pretty table topper. I'll have to consult with Smitty who seems to have adopted the table toppers as his exclusive domain. 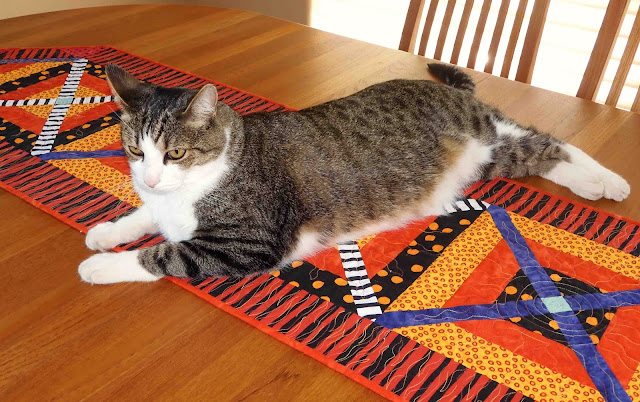 In other sewing, I've spent the morning hunting down copyright information (very confusing), and printing an image I'll use to make my next challenge quilt. I'll start there today with my sewing. I'm afraid you'll have to wait for the reveal on November 1st. Between now and then, I'll only be able to share peeks. Here's a hint though, and I'm curious what your answer would be. I'm often seeing the question, "What is the first newspaper headline you remember as a child?" Most people of my age answer with "the Kennedy assassination." I have answered that way too. But then, I realized my memory of newspaper headlines goes back farther than that (yes, I'm really, really, really old), and that's what I'll be doing for my quilt. How would you answer that question? Inquiring minds (especially Smitty) would like to know.
Posted by Barbara at 9:34 AM

While natural disasters capture headlines and national attention short-term, the work of recovery and rebuilding is long-term. ~ Sylvia Mathews Burwell

Man lands on the moon.
Smitty knows a good spot when he sees one. Love your Big flower quilt, that is very impressive.

Gorgeous quilting, as always Barbara. I seem to recall the end of the Vietnam War headline as perhaps my first. I didn't pay attention to newspaper headlines as much as I possibly should have back then.

Love the posies stitchery... and the blocks together look wonderful!

The Kennedy assassination is my answer to that question. I didn't pay much attention to news back then but sadly, that one could not be missed. I love your "aqua" fabric. I'm especially partial to Daisies.

My first memory ofaheadline is the death of Winston Churchill

Your little Posies blocks are looking great…just for perspective, what size is each finished block?
Sandra B
scb304@juno.com

Me again!
I forgot to answer your headlines question… I think my answer would have to be the assassination of John Kennedy. I was in the 9th grade and will always remember not only the headlines in the newspaper, but the announcement made in Algebra class that afternoon. I will never ever forget that day.
Other events that pop up in my memory are Hurricane Hazel, and the launching of Sputnik. I haven’t thought of either of those in a long time… thanks for the challenge!
Looking forward to seeing what you come up with for your challenge piece this time!
Sandra B
scb304@juno.com

I was only 6 months old when Kennedy was assassinated (but I was also only blocks away when it happened). I don't remember the first headline. Maybe landing on the moon?

Gosh, so many headlines! Eisenhower won, Sputnik, Hawaii and and Alaska become states. But my dad really made an impression when he woke us from sleep to see the launch of explorer 1. I did not know how important it was at the time as I dragged my sleeping body to wakefulness. My dad, who was in the US Army, went on from the Signal Corps to SATCOM, Satellight Communications, and we travelled all over the world with him as he joined with others to set up satellight stations to connect the world.

Talk about old! How about the coronation of Queen Elizabeth II? Happy headlines would be a good focus. Moon landing? Ronald Reagan elected President…….unless you do not want to get political! What a challenge topic!

I have been thinking about this theme, and find I have little recollection of news headlines. I recall hearing news stories on TV, but think I didn't pay much attention to newspaper headlines. I'll just go with saying I was too young (ha!) to notice. I'm looking forward to seeing what you create. Meanwhile, I'll be thinking on mine.

My headline that I remember is Feb 14, 1959… Oregon Centennial my dad made sure I saw that headline. He was such a history buff.

Hmmm - the Kennedy assassination and Neil Armstrong on the moon would have to be my memories. We didn't own a tv and didn't get the newspaper so what I did see would have been in school and I would have heard about on the radio.
The newest 'Posy' is so sweet!

I love your Posies blocks! It's so fun that you're coordinating them with the RSC color of the month, too. Your Dream Bog panel is really impressive!

The posie blocks are so pretty. I was going to do them too, but decidied not to in the end, as I like to work in Perle cotton and not the stranded kind, and thought it would be way too thick for these small designs.

I don't even know where to start, there was so much eye candy here! Love the redwork, the posies (I even looked into the pattern & website), your quilting is exquisite, but I have to say that I really LOVE the picture of Smitty! That table runner is gorgeous and proves Smitty has fabulous taste! Ha!

You continue to just motor along with your projects. I really like the Posies blocks, they are all so pretty. First headline I remember? Hmm, my parents were pretty restrictive about us kids watching TV news and I don't remember that we ever got a newspaper. I guess the first news headline I remember was when they came on the intercom at school and announced that Spiro Agnew had resigned as VP.