It always feels as if I've survived a torture treatment the day following a perm. Now I'm saddled with a stinky permy head. I can wet my hair, but not wash it, and so the torture continues for at least one more day. Sounds like a good day to go grocery shopping, doesn't it? Because I figure grocery shopping can't be even one-quarter as bad as sitting for a perm. At least it starts with Egg McMuffin. [Considers what this means about quality of life when McDonald's is the bright spot of the day.] I'll be out bright and early this morning though. I missed my daily cucumber check yesterday, and so I expect I'll find some that have grown to the size of baseball bats overnight.

Speaking of cucumbers, I'll be making more pickles today. We broke open a jar of the ones I made last week. These were processed for shelf-stability. 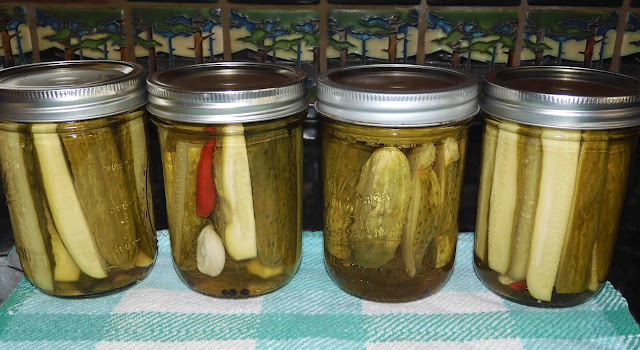 We were supposed to wait until the end of the month, but if I'm making more pickles, I want to be sure I'm happy with the recipe I'm using. They're fine, but missing something from the ones I made to be refrigerated. I made the refrigerated pickles (below) using this recipe. If you're not into canning, I can highly recommend these. They have a nice clean flavor, and the pickles are nice and crispy. 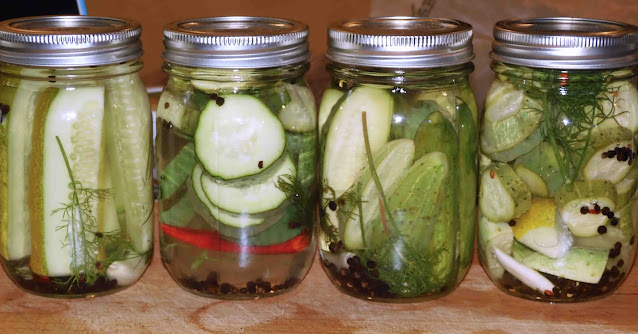 The differences are cider vinegar (processed) vs. white vinegar (refrigerated), and sugar (refrigerated) vs. no sugar (processed). I'm going to try a different recipe for these next ones, and so I'll report back on which ones we like best.
Okay, so despite the lack of oxygen from my smelly perm, I managed to get some sewing done yesterday. I had a lot of help in the sewing room. I got a start on my next challenge quilt for the "newspaper headline" prompt. My first task was to trace and cut the first applique template. Ever since I made Sadie's pawtrait, 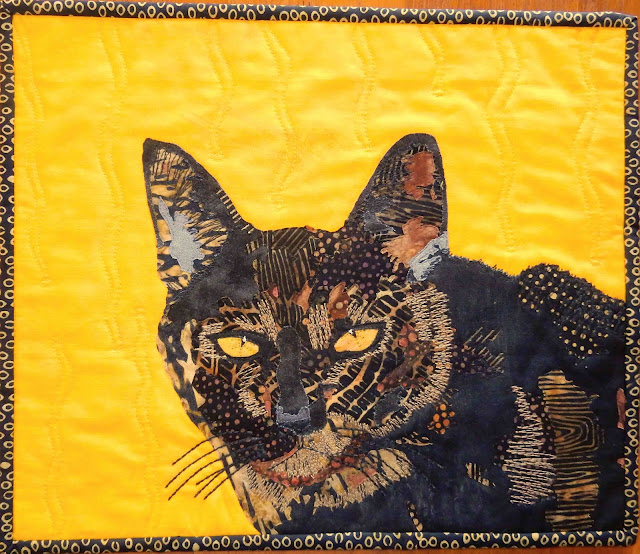 she thinks every quilt I make is going to be a new pawtrait of her. After all, she gets purrtier every day, so why wouldn't I want to make quilts exclusively of her? In this case, she's checking to see if the template can accommodate her size. 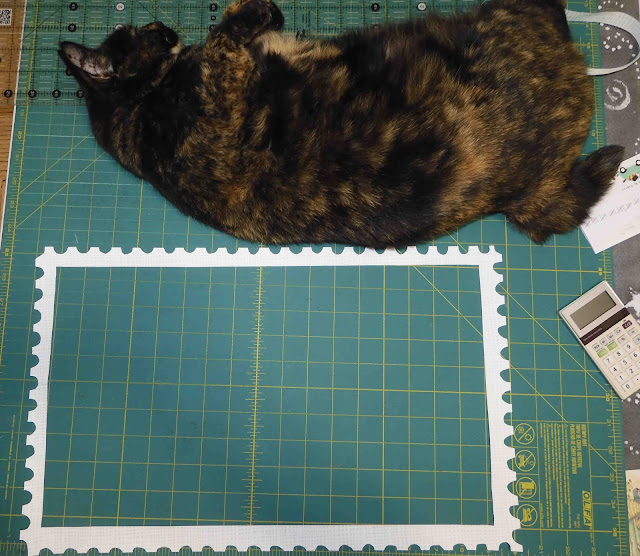 Smitty thinks this whole notion is pawsitively scandalous.
That's purrposterous, Sadie. Nobody wants to see your whole body unless you're posing for Purrboy magazine. 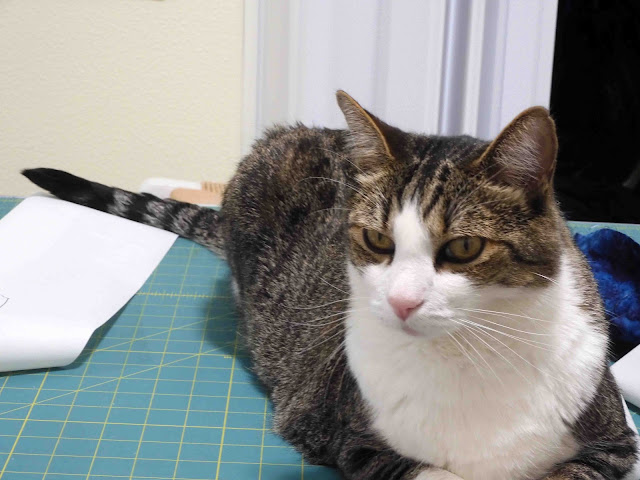 Well, I knew what I was doing even if she didn't. I'm making this quilt in about four sections, and I finished the first one yesterday. This is the lower left corner of my quilt. Any guesses? 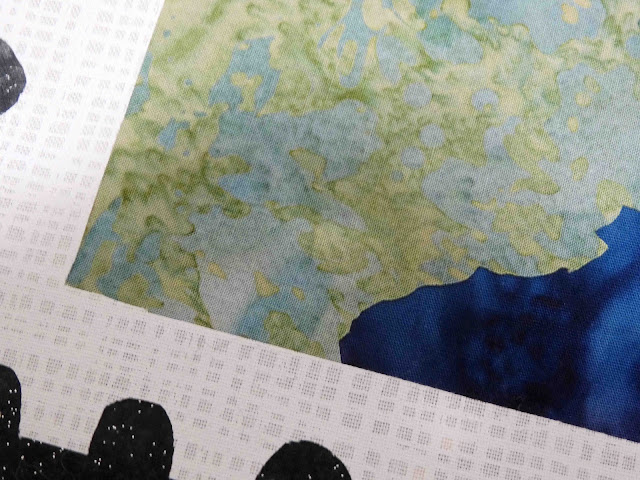 Okay, and so then I got back to the quilting on the Dream Big panel. I'm working my way around the outside edge now, and so I'm filling in with whatever pops into my head. This first one is a motif similar to one I did when I quilted the Wine Country quilt. 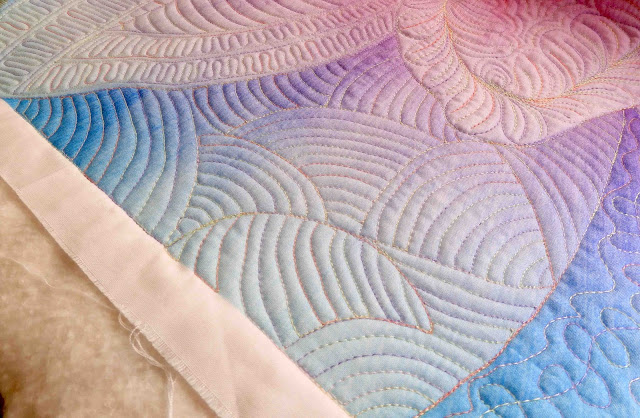 For Wine Country, I was trying to suggest fields of grapevines. 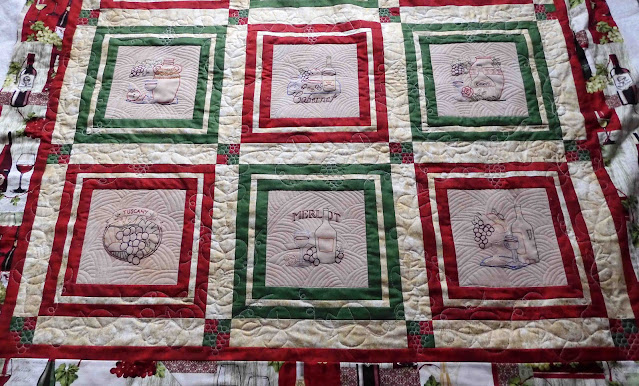 From there, I moved on to the next section where I stitched this motif I call "Flight of the Bumblebee." It's a big wavy line meander, and then more smaller meandering, criss-crossing over the original line. There were some open areas when I was finished, and so I filled in with another wavy line. 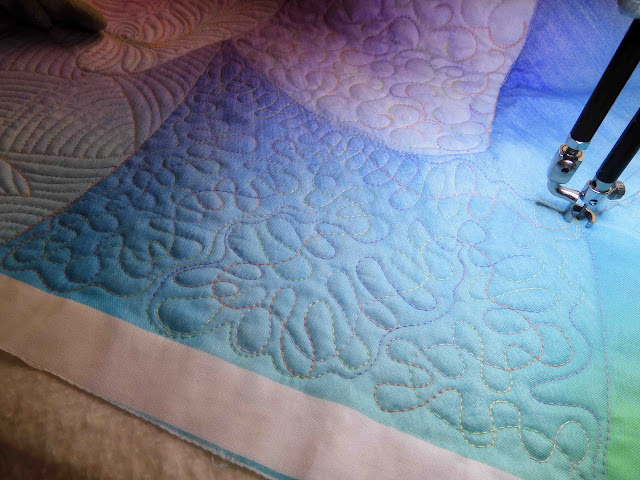 I was working on a small corner section when my machine started acting up like it does intermittently. I refer to this problem as "drag." I don't know what causes it. It's a purrplexing purroblem, for sure. 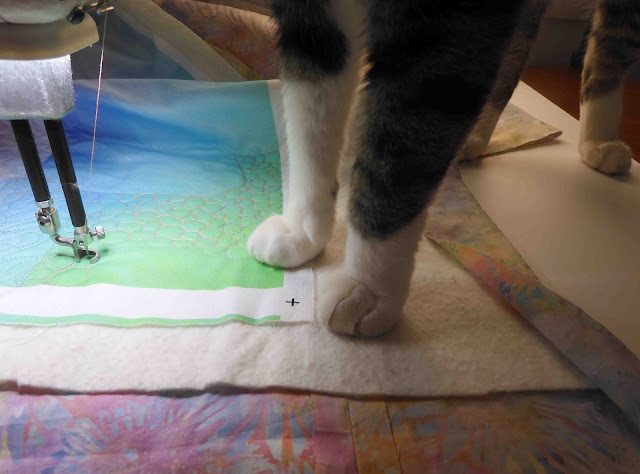 It usually resolves itself with some pets and snuggles, and then I can continue on. 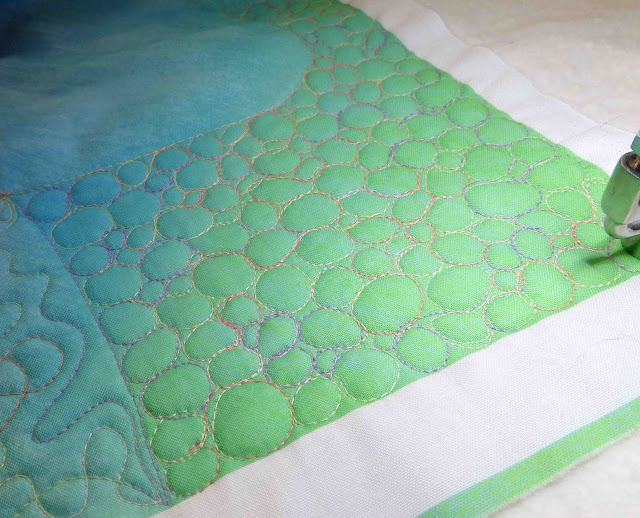 I thought I would stop there, but then I had an idea for what to do in the next small section. It didn't work out at all like I planned, but that's how it's been on this whole quilt. I have an idea in my head what I'm going to do next, but my hands have other ideas. It's a little like riding in a car and trying to backseat drive when the driver pays no attention to what you're saying. 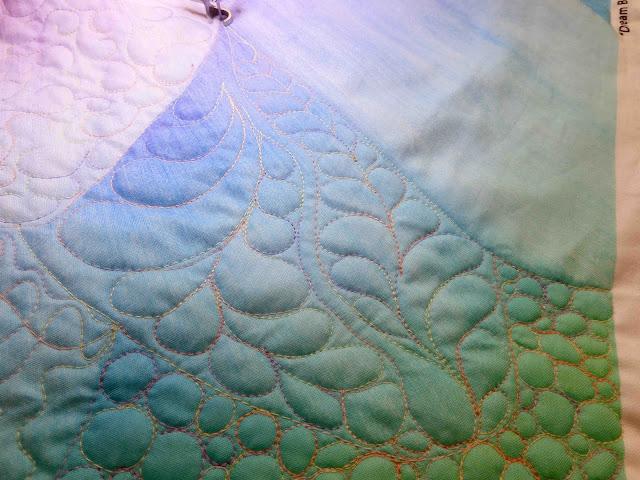 Okay, and I was tired of sewing by then. When I went downstairs, I happened to look out the glass door to see a second bloom forming on the star magnolia outside. The star magnolia is always one of the first things to bloom in spring, before it even has any foliage. I've never seen it bloom twice. This is only one flower. It has buds all over it. It's one of my favorite flowers, and so it's a treat to get a second chance to see them in a single year. 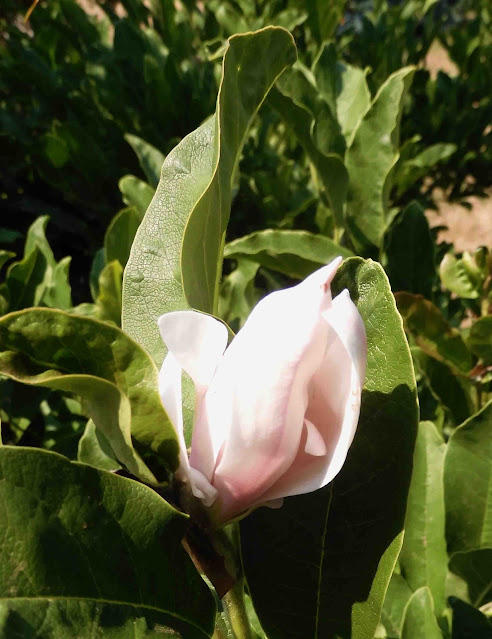 So I already eluded to the day's activities: cucumber harvest, grocery shopping, pickle processing. If I'm not completely worn out, I'll get some sewing done too.
Posted by Barbara at 7:28 AM

I don't want a pickle. I just want to ride on my motorsickle. ~ Arlo Guthrie

Well, with "stinky perm head" you should have no issues with pesky grocery shoppers in your aisles!

Oh that is interesting--my magnolia is having a 2nd bloom, too...my flowers are a deep mauve-y pink...it's never done that before this year...
??? hugs, julierose

The edges of your art quilt remind me of postage stamps. What's inside vaguely looks like a coastline and body of water. Am I going in the right direction?

I think I might have an idea where you are headed with the challenge quilt. I'll wait to see if I'm right. Meanwhile, I'm still thinking over here. I haven't had my hair cut since last September - it's getting really long, so I need to decide if I'm going to see how much longer I can stand it, or get it cut. I'm watching your pickle progress, expecting I'll have more cukes from my FIL soon.

Sadie's pawtrait is incredible. I can't wait to see what you make for the newspaper headline quilt. I'm very impressed that you've started already! I love all your fmq. All those colours and textures are beautiful :)

Stinky perm head should have kept the other shoppers away. I just had my hair cut last Saturday--20 inches donated to Wigs for Kids.

Looking at your challenge quilt I first thought the edges looked like fencing, but when looking at the center it looks like a postage stamp of the earth as seen from outerspace.

Your flower quilt is looking impressive and Smitty is now a "drag king." :-)

Stinky perms - I remember them well. Only ever had one in my life and it just about killed my hair. Didn't grow for an entire year and came out in gobs. Not a pretty sight! Since then I haven't dared even entertain the thought of getting another one.

I have board straight hair and used to perm it when I was younger. My daughter (who actually has natural curl in her hair when it's longer) thinks that the idea of a perm is just ridiculous. I hate any trip to the hair dresser, so I can sympathize.