We both admitted to being lazy yesterday. We did some stuff in the morning. We took Mike's truck in for service. An early-morning outing is always a good excuse for our beloved Egg McMuffin. For the past year-plus, we've been eating them in our private dining room...the one located in the parking lot of the Bi-Mart next door. Yesterday, we dined in. Yeah...impressive, no? (No?) After that we came home, and I did my one housekeeping chore and then watered the flower pots.

The kitties had to wait to go outside until we came home. Lately, this is their first-of-the-morning routine: 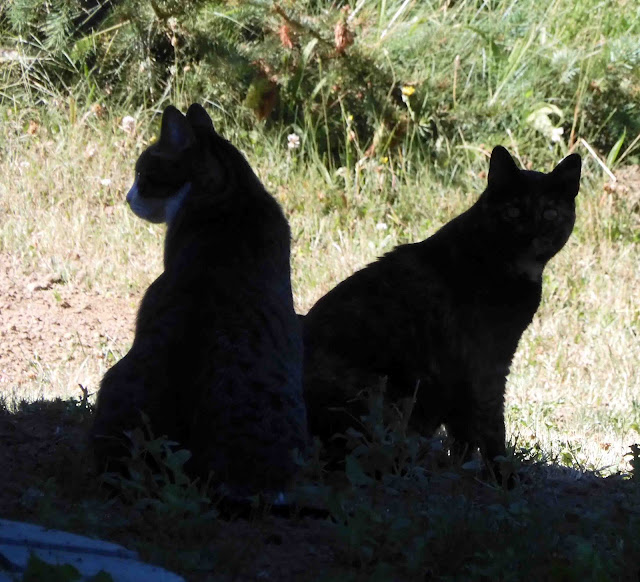 They run to the far side of the garage, and then sit like bookends staring at the downed tree branches, toward which their ears are pointing. We're still waiting for a tree service to come cut the downed limbs on this worst-of-the-damage Douglas fir. The tree guys are busy in our area. There were lots of downed trees and limbs that need to be dealt with. Ours won't get cleared away until sometime next month. In the meantime, I think some critters have moved into the debris lying on the ground, thus capturing the kitties' imaginations.
While I was watering the flower pots, I noticed the Black-Eyed Susan is getting ready to bloom. I have an idea if I walked outside right now, I'd find it open. It's the first year for these, and so I'm kind of excited for them to start performing. 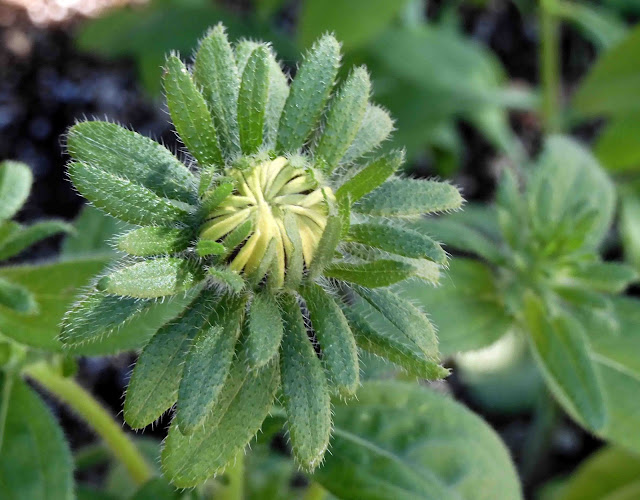 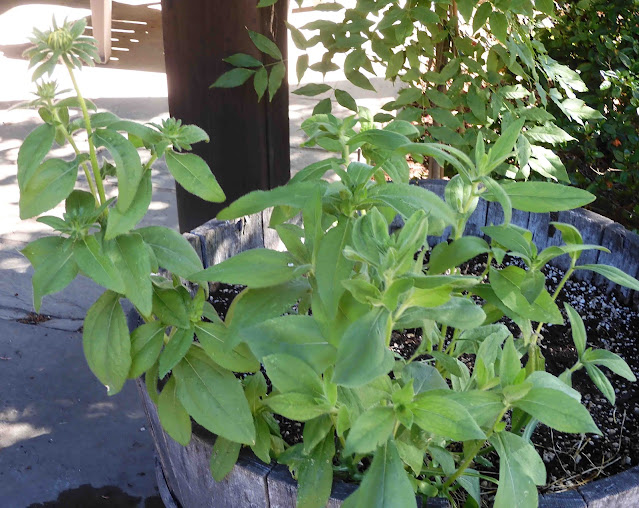 On the far side of the house, these deep pink echinacea have been blooming for a couple of weeks. This one is called "Pow Wow Wild Berry." 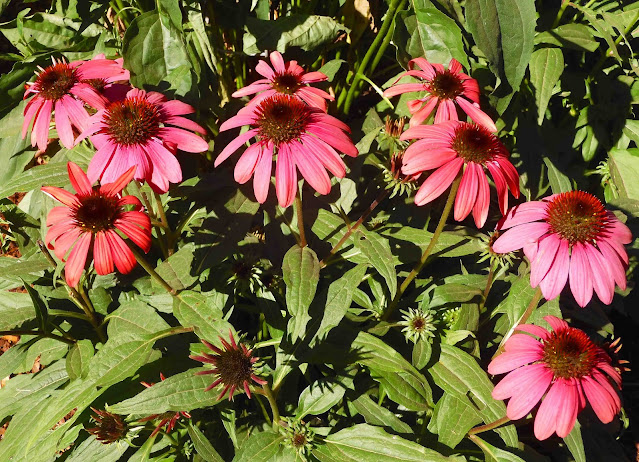 Now, the lighter pink ones are starting to join in. 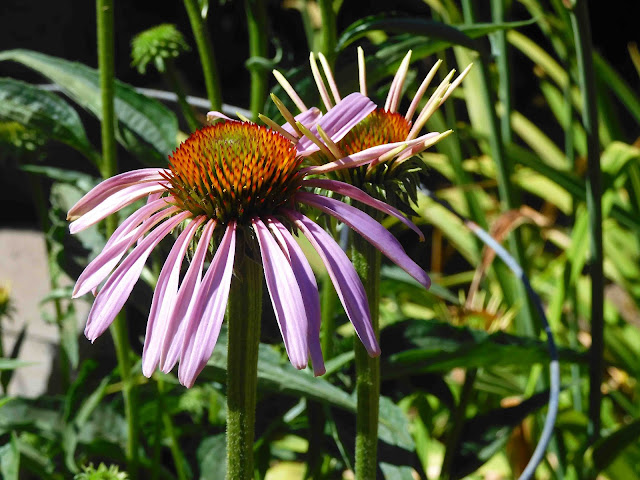 This plant has become so large that I've had to put a tomato cage around it to keep it from falling over. 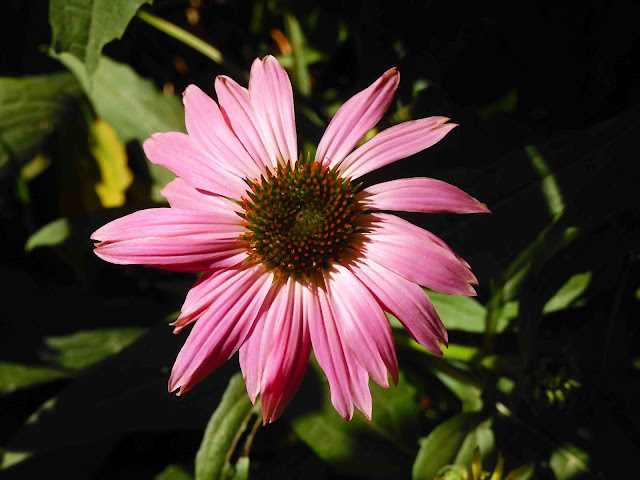 Okay, and remember how I showed you this rebloom on the Gerbera daisy? I predicted I'd find it bitten off by the squirrels. 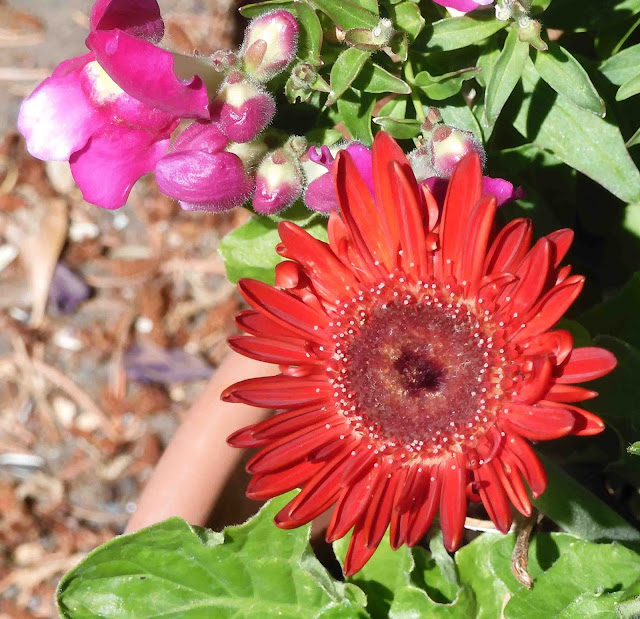 True to form. (Shakes fist at squirrels...squirrels ignore her completely...go back into their hole...raucous laughter can be heard, along with the unmistakable sound of high-fiving.) If only I could predict lottery numbers so well. 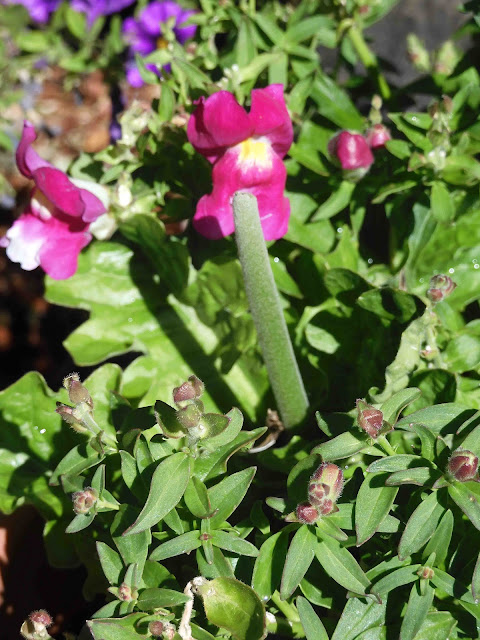 Oh, and here's something. This is the original hydrangea, planted by the original owner/builder of our home. I don't know for sure when it was planted, but we've lived here for 19 years. It was here before us. It was doing beautifully for several years, and it bloomed in the bluest of blues. So pretty. Then, I got the bright idea to trim back some branches on a neighboring tree so it could get more sunlight. It did terribly after that. Hydrangeas are not sun lovers, and this one did very poorly after I "helped" it. We had to remove the tree several years ago. Now, it has a dappled willow for its neighbor that provides it with shade all day long. It's doing much better now, and it has the most flowers I've seen in many years. 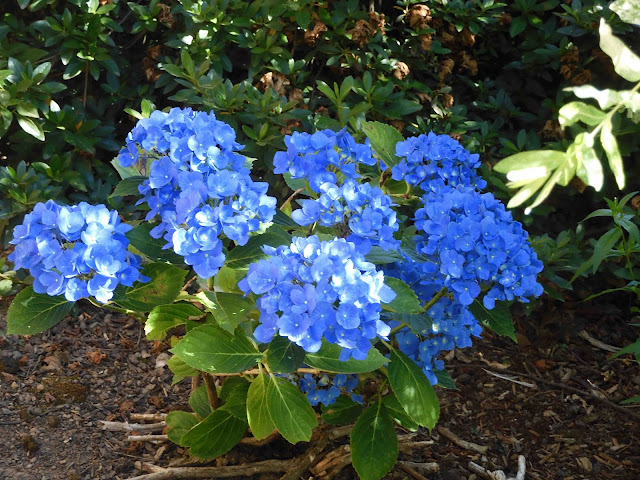 When I finished watering the flowers, Mike's truck was ready. I'd been planning to leave in half an hour for my doctor's appointment (no concerns about my skin, by the way...yay!). It worked out okay for me to drop Mike off and head to downtown Portland. The doctor's visit was fine. Traffic was fine both going and coming. Parking was easy downtown. In other words, there was nothing particularly taxing about this trip, except that any time I have to drive to downtown Portland, I arrive home exhausted. I spent the rest of the afternoon napping.
Okay, now in the cute category, Beary Patch is with its new owner. Meet Roman. He likes his quilt. Isn't he a cutie? 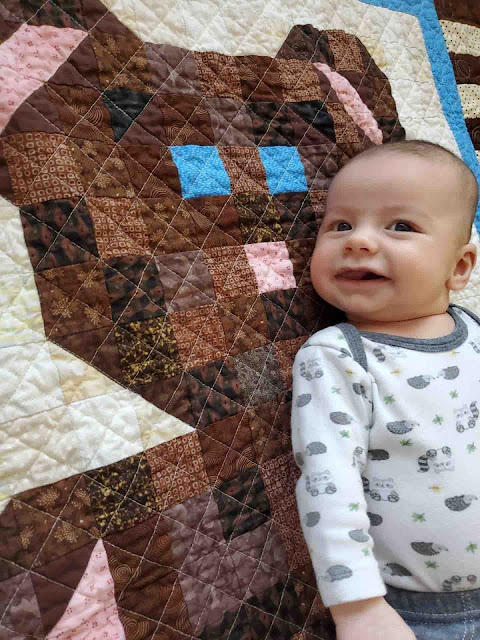 And Mike finally took the drone footage off his drone from our trip to Palouse Falls back in June. It wasn't a great time of the day to be shooting because of the bright sunshine, but I think you can still get the idea of the waterfall. It's less than 3 minutes in length, and it's worth watching to the end when you'll be above the waterfall looking down. When he tried to bring the drone in for a landing, we lost visual contact with it for a bit. It can fly itself home if Mike tells it to, and that's what it did. When it was directly overhead, we could hear it and looked up. "Oh, hello, old friend!" So here's what the drone saw that day. If you can't see the video, then click right here.

Aside from some slow-stitching, that was our day. We were both lazy. When I told Mike I was too lazy to make dinner, he agreed that he was too lazy for me to make dinner, and we had dinner out. And then we came home, snoozed in front of the TV, and then hit the sack. Some days are like that. Maybe today we'll be more productive. Maybe today I'll actually start on the Dream Big panel. Yeah...maybe that.

So, okay, my friends. If I'm going to be more productive today, I'd better get going. How did your Monday go?

There is a hidden message in every waterfall. It says, if you are flexible, falling will not hurt you. ~ Mehmet Murat Ildan

Today's quotation made me go hmmmmm. I have a very different vision of falling down a waterfall. Rocks, you know. Roman is adorable! Your flowers are always so beautiful, mine still so disappointing. But I discovered that we also have a hydrangea, one I had not seen in bloom our first summer here. It only has a single flower, pale pink, and I will need to pay attention to how much light it is getting now. Perhaps that's the problem.

Black-eyed susan is the Maryland state flower. Imitation black-eyed Susan's are used for the Preakness winner flowers because they don't bloom in spring. They used to use yellow daisies and paint the centers black. Now they use the viking pom flower.

Cute bear quilt with an even cuter baby on it. Love the drone footage of the falls. Very cool. Thanks for sharing it with us.

Roman looks quite happy with his quilt - both are very cute! I love that amazing blue hydrangea. We never had any luck growing them and perhaps it was because they got too much sun.

Just heading to bed and then realized I hadn't read your post. That little guy on the bear quilt sure is a cutie! The kitty silhouette is a great photo. Those darn squirrels. What til you see who came to visit me while I was sewing the other day. I'll post a pix in Thursday's post.

I forgot to tell you.. I don't have a head for heights!!!!
What a stunning video, well done Mike.
Lazy days are happening here, shorted hours as well!! Love that blue hydrangea, gorgeous shade.

LOVE the drone film = Mike has the BEST of all toys, between the two of you (no, I don't consider a sewing machine a toy.....jes' sayin'..
I noticed a movement, mid to lower L side of video at 2:23 and wonder if that might be a fish looking to surface? I also wonder about the temp of the water and the actual force of the falls entering that pool................Regardless, thanks so much, you two, for posting. Truly enjoyed it!
C

Nice pictures of waterfalls.Thanks. We spent the day walking around Madison, IN. There is a car bridge there that they added a pedestrian walkway where you can walk over the Ohio River to KY. We were bushed when we finally got home. We walk the neighborhood after supper and unfortunately I stubbed my toe and fell flat on sidewalk. After spending time in ER, I came home in a cast on my wrist. It was a long night! Last night we went to bed early and slept in.
Love seeing your flowers. Our neighbor's Blackeye Susans are beautiful.
Have a good day.

Roman looks so cute on the bear quilt. It would be interesting to see how fast he grows to match the size of the bear.
Great drone footage of the waterfall.
Also great photos of your flowers.
We love your kitty bookends.

Great kitty bookends! The drone never got a picture of you two!