Before we left to go ride bikes yesterday, I was able to finish up the stitching for the final Dancing Chickens and Flying Pigs block. This one is called "Pleasures of a Peaceful Life." 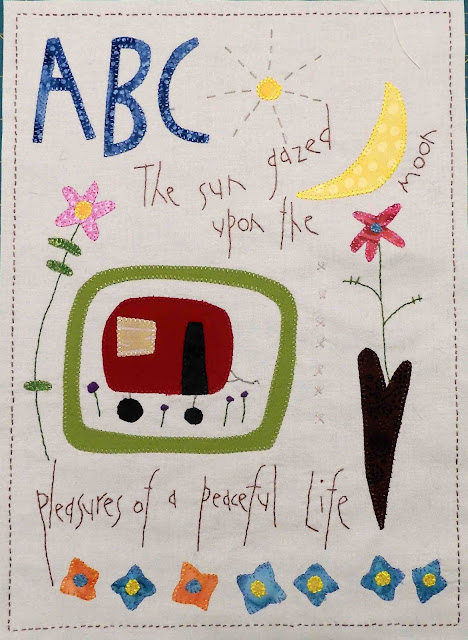 Here are all the blocks I have for this quilt: 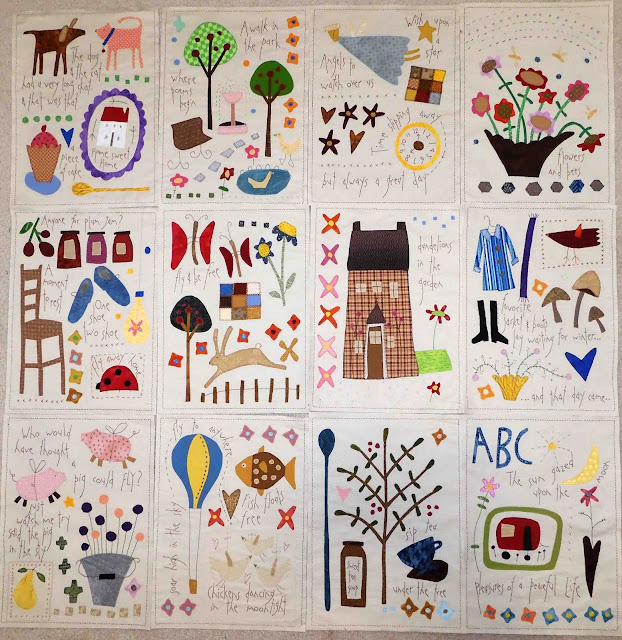 If I sew it together as the pattern shows it, I would set the blocks 4 across and 3 down, as you see them here. It makes sense since the blocks are long and narrow. The quilt will end up square, essentially. The pattern cover shows it with a border using the same off-white background fabric, and there are some embroidered cross-stitches all the way around. I'll probably do something similar, but that will be at least several months down the road. It might make a good take along project for our "Rainbirds" trip this winter.
I've reached a point in my work flow where I'm going to have to sandwich more quilts. Dream Big is the second-to-the-last of the quilts I have sandwiched for quilting. I believe sandwiching the huge pile of quilt tops will probably be my goal for August's OMG. I'm getting ahead of myself though. There's still work to be done on Dream Big.
I'm having fun with this. I'm working out from the center, first outlining the petals as I come to them, and then filling in with something inspired either by the diagram I'm working from, or else springing from my own imagination. Sometimes I just quilt a wavy line and then see what happens from there.
It's complicated by the fact that I'm having to incorporate and work around the flaming arms I quilted the day before. As I work my way outward, I'll have the canvas of the whole petal, unadorned by any previous quilting.
For this first one, I made another outline around the outer edge and then filled in with circles. Then a bunch of echoing lines. 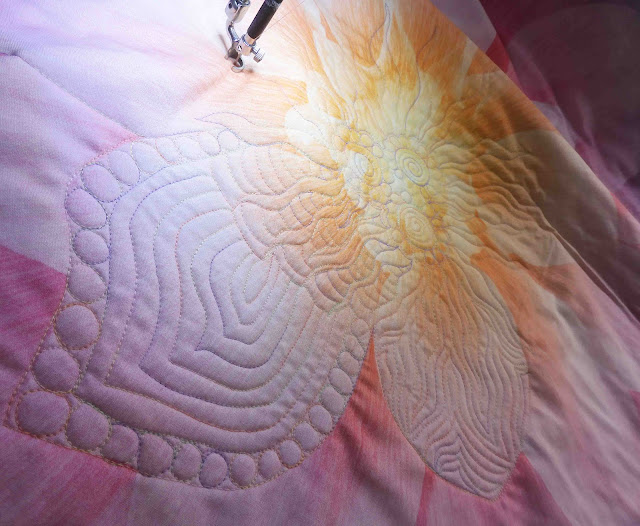 This next one started with the "hook" in the center, and then I just quilting a few more with some arches around it. I like how this one turned out. 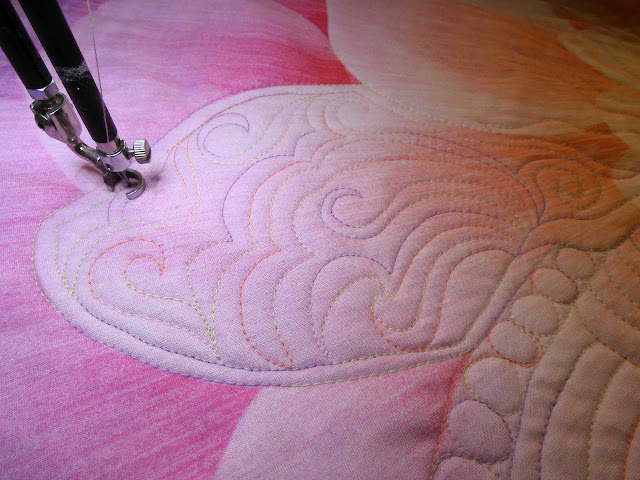 This is my least favorite of the ones I did yesterday. I was trying to do a fancy feather. When I had the feather portion finished, there were gaps in the middle, and so I filled in with some pebbling. It's fine, but it's less pleasing to my eye than some of the others. 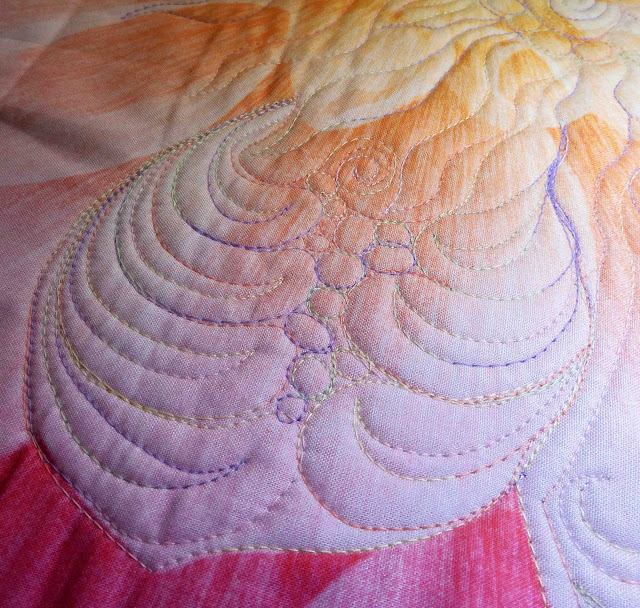 On this next one, I tried making one of the motifs from the diagram around the outer edge of the petal. That worked out okay. Then I just filled in the center. This was a small area, and so there wasn't much room for getting very fancy. 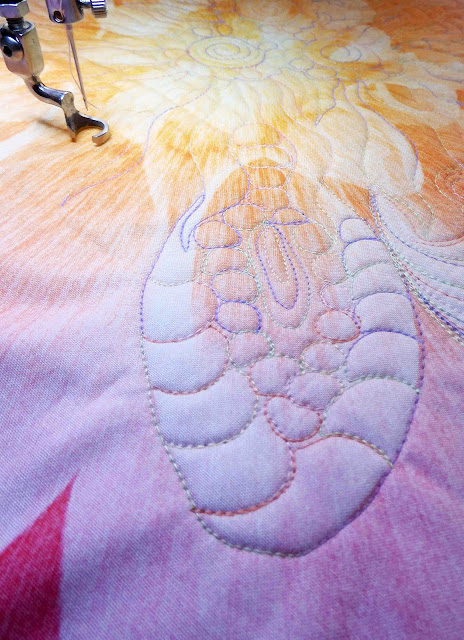 This next one is another even smaller petal. 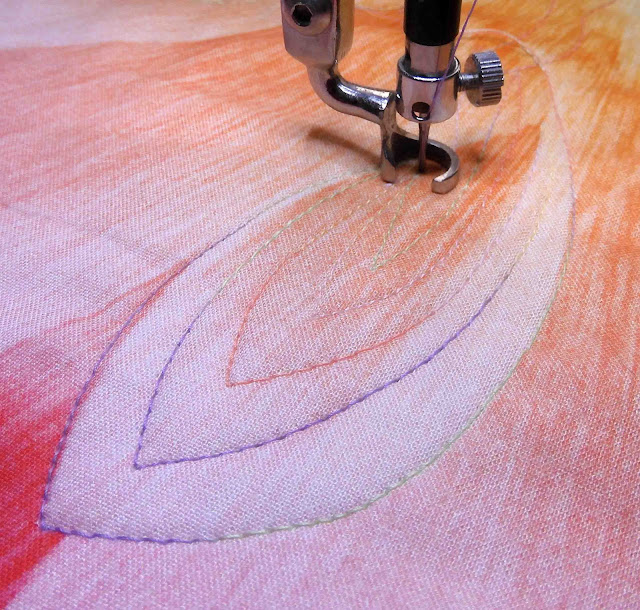 For this one, I was trying to copy one of the motifs from the diagram. Again...it's fine...not exactly the look I was going for, but good enough. 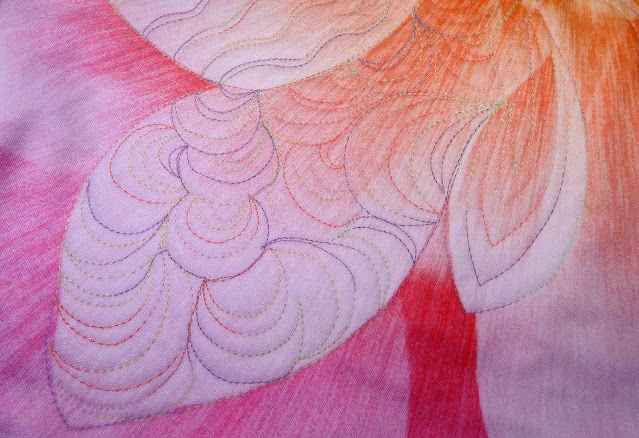 For this one, I did some repeating wavy lines, and again, I was trying to work around the flaming arms from the day before. 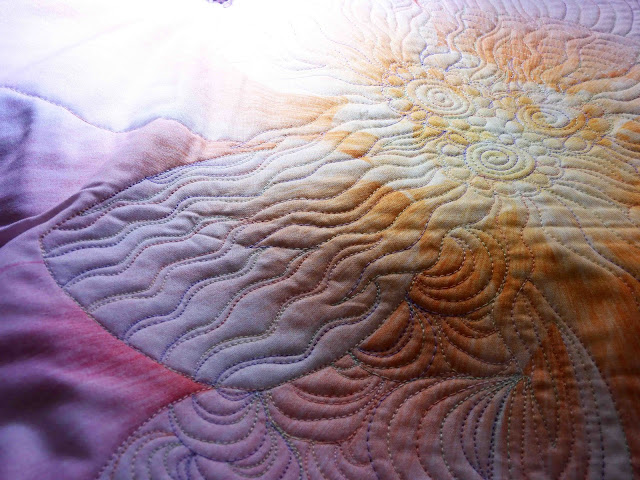 It was time to quit for the day. Here's how it looks so far: 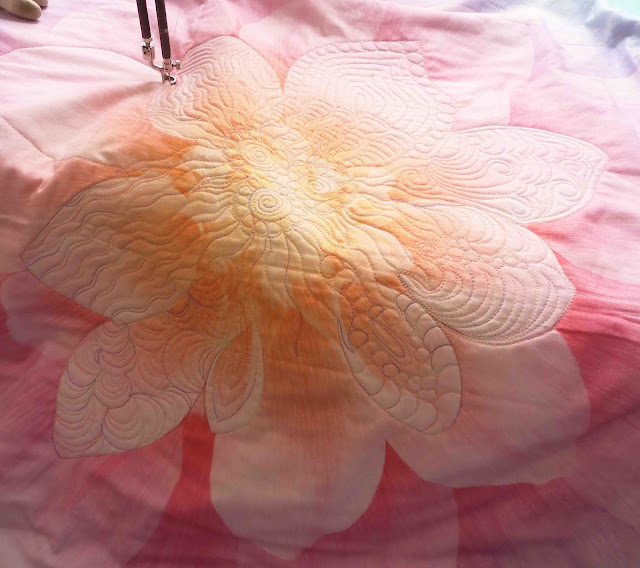 I left the quilt on the machine, having stitched around the outer edge of the next petal. Just before sitting down here, I took it off the machine. I realized the window washer guy is coming today (trying again after he no-showed last week). My machine sits right next to a window, and I realized I probably didn't want drippy dirty window water on the quilt, so I took it off. It's a good opportunity to start from the center of a petal and work my way out. Up until now, I've been stitching around the edges and then taking off from wherever my needle ended up.
I'm hoping to get some more quilting done today, but it's also a canning day. I harvested about a half dozen more beets. I expect I have about 7 pounds now, and that should be enough for 6-7 pint jars. They have to be boiled, peeled, and then canned in boiling water with a little salt. It means getting out the pressure canner and teaching myself to use it again. It isn't hard, but I always have to read the instructions to get it set up and remember the steps for sealing the jars. Hopefully, I won't blow up the kitchen today.
I'll end by saying our bike-riding went okay yesterday, but I wouldn't say it was fun. I'm afraid the bikes may be so overloaded with injury baggage it might not ever be fun to ride them. We'll keep trying though. I was trying to accomplish some skill-building yesterday, and now I'm thinking it'll be better to just find an easy trail to ride on. The skill-building is fairly tedious, and I don't think it's particularly helpful anyway. That won't happen before next week, and so I'll have some time to get my mind right about it. We both need our attitudes adjusted where the bikes are concerned.
Okay, so onward. Today I'll be taking the first stitches on the 3rd block for the Heartland Barns quilt. I need to keep my morning moving around so I can have myself put together when the window washer guy arrives.
Posted by Barbara at 7:21 AM

Fantasy is an exercise bicycle for the mind. It might not take you anywhere, but it tones up the muscles that can. Of course, I could be wrong. ~ Terry Pratchett

Really beautiful projects and your freemotion quilting is awesome. While I'm proud of you for getting back in that saddle on your bike, I can certainly understand it feels stressful. I hope one day you'll find it joyful. Possibly on one of your camping adventures, on a beautiful bike trail. Stay safe!

PS - I saw an RV camping in English Camp, San Juan Island and thought of you. Sadly it isn't an official camping ground but a beautiful and private space where park volunteers can stay during their volunteer time.

I love the blocks for the quilt, so bright and cheerful and so much to see and discover. The quilting is looking good. I need to get back to free motion quilting again. Everything I've done recently has been using the walking foot. I think heading out on an easy bike trail would help you have a more positive view of the bikes. Persevere and I'm sure you'll find you'll enjoy using them

Your quilting is amazing--even the portions that you think are not so hot :-)
As far as the bike ride--in my mind you are "over thinking/planning' which might be causing more stress. A nice open flat trail might be best

You are doing an amazing job, I am always impressed with how quickly you overcome the unavoidable learning curves with anything you try. Equally impressed that you are back on that bike! I'll just hold my breath until you build those skills.

Your quilting is looking really good, and I'm glad you are enjoying it. Also glad the biking went okay and that you are keeping at it. Those beets sound delicious!

Your quilt is definitely looking amazing. The areas you're not so satisfied with look absolutely fine when viewed as a whole. As for the bikes - I wouldn't feel comfortable on them either and the fun factor would be constantly tempered with a healthy dose of terror.

Barbara, I just love the happy-go-lucky, delightful message of Dancing Chickens and Flying pigs-so sweet. The hand quilting you are doing one the mesmerizing floral is also nothing but impressive and coming along so beautifully. You are totally amazing!

Our nephew and his wife have found some fancy grocery store that throws out perfectly good food on a certain day so they go get boxes of fresh produce, and have begun canning all kinds of things, like pickled sliced red onions, loads of green beans, and recently purchased a freezer to help hold them over through winter. Hubby got a quart of the picked onions and loves them, says they remind him of sauerkraut. No wonder I did not care for the taste of those onions, I don't like sauerkraut! Always something new around these kids!

You are making really good progress on the flower quilting. A Peaceful Life looks great too. Such fun blocks to look at, you see something new each time you lookk.