My gardening chores took longer than expected yesterday, and that left only a little time for quilting in the afternoon. I'd walked past our rose bush many times, which had several suckers that needed clipping. Also, a wild blackberry growing among some junipers. Both of these tasks required gloves to remove them, and so it was easier to just keep walking by. Yesterday, I couldn't stand it any more, and so I had to take care of all of that as I walked toward the vegetable garden. When I reached the vegetable garden, I found plenty of weeds to hoe. Also, a zucchini for harvesting and several more pickling cucumbers. I hope I can get enough cucumbers soon to do some pickles. So far, I have about ten...not enough to fill even a quart jar. There are lots of tiny ones coming, and they grow quickly to the size I'm looking for.

As for the blooming things, this spring-blooming clematis is blooming for a second time. It's the first time I've ever seen it do that. 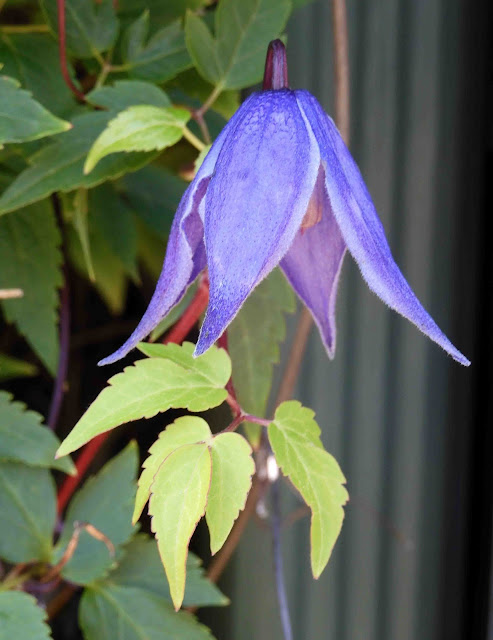 Possibly it was tired of being shown up by the Rouge Cardinal clematis to its right. The Rouge Cardinal is nearly finished with its flowers. I noticed yesterday it has some dead leaves on it. I'll need to stop and investigate what's going on there. I believe one of the vines has died, but the rest of the plant looks fine. 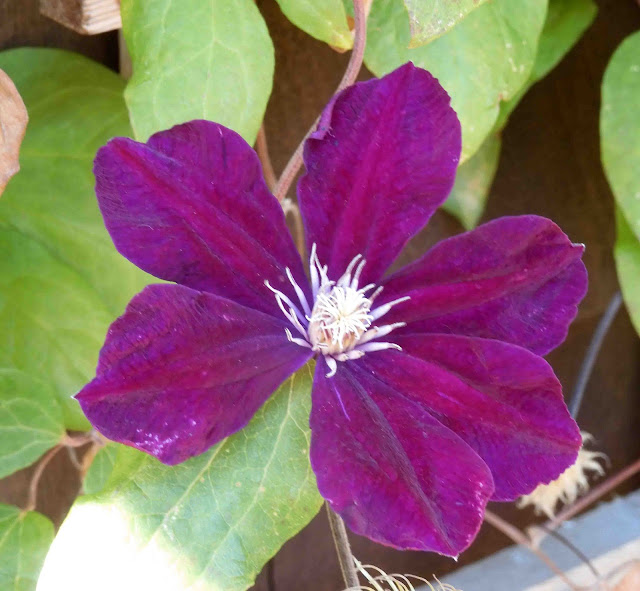 There are a few geraniums in one of the flower pots. If you look at the image below, you can see where there are bitten off stems from the other flowers. For whatever reason, the squirrels don't seem to like these red ones. On the other hand, I may go out this morning and find them bitten off too. 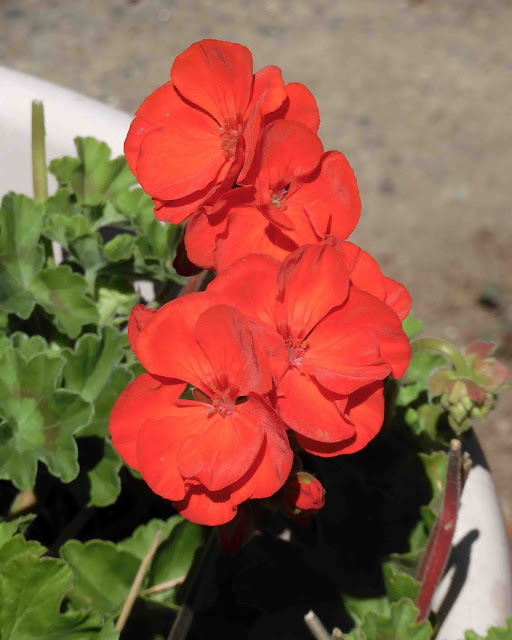 When I'd finished hoeing and harvesting, I took some time to survey the "bee garden." I'm seeing more color beyond just the usual white and yellow blooming weeds. I figure if I keep throwing out more and more wildflower seed season after season, eventually I'll get more of the colorful wildflowers I'm looking for. The bees do not discriminate. This area is humming with bee activity, and I see them on the vegetable flowers too. 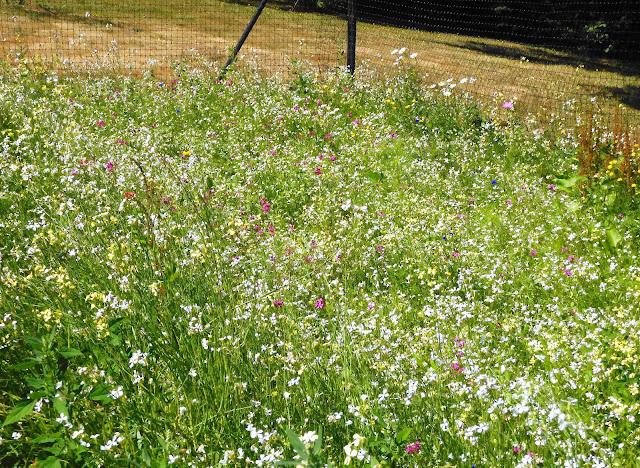 I'm seeing more of the cosmos. 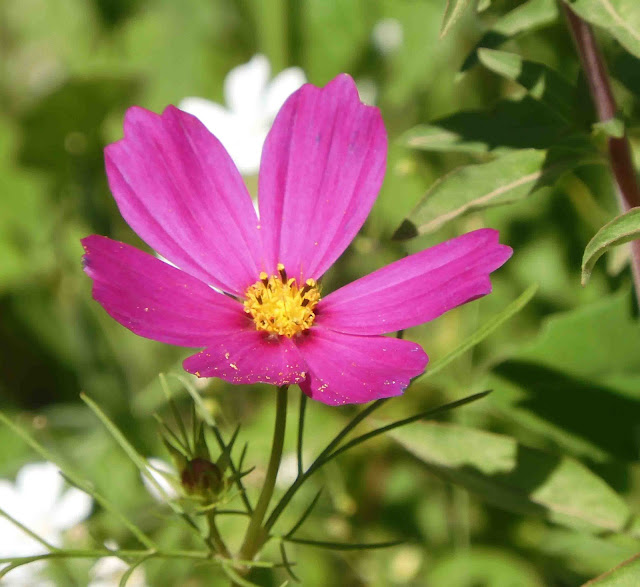 Here's another in a different spot. 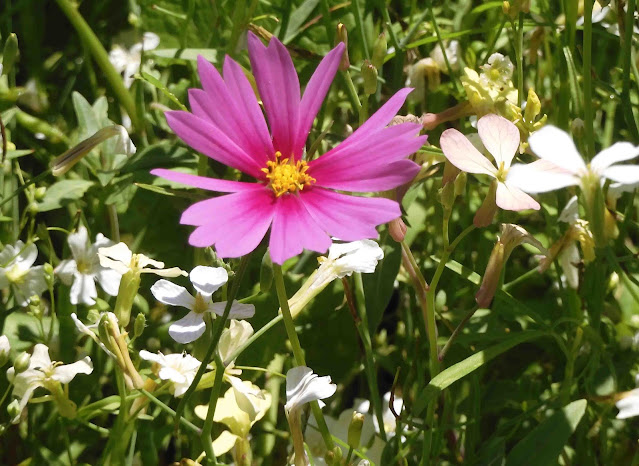 Here's some kind of little poppy. It has the papery petals of a poppy, and it is just a little smaller than the California poppies. 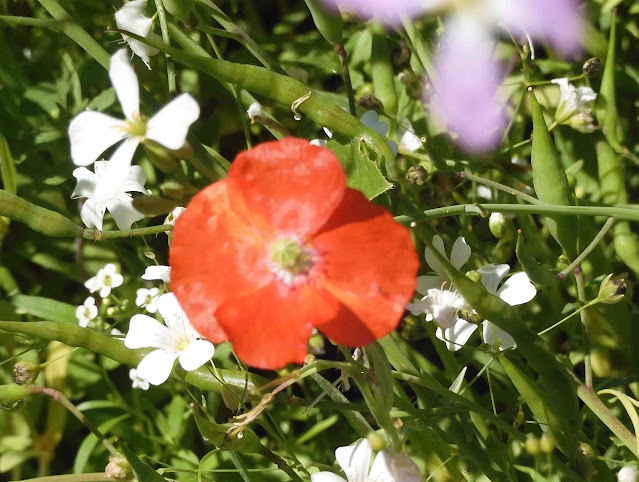 And I'm seeing more of the California poppies. 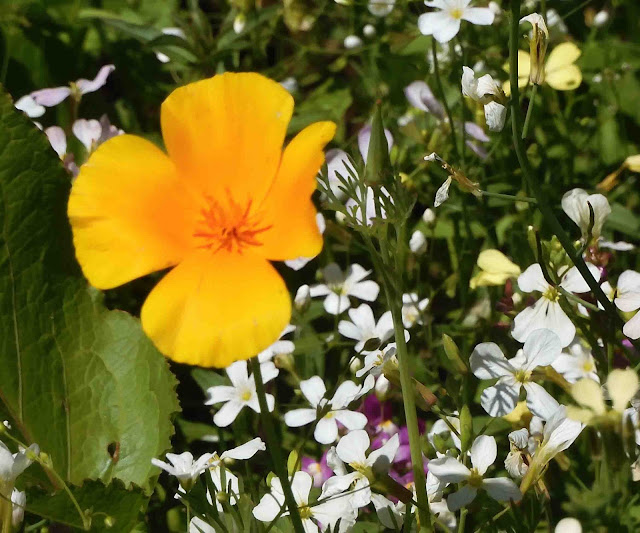 Every day I see something new in the bee garden. Also, the Ring of Fire sunflower is blooming now. This might be my favorite, even if I do get that song stuck in my head. 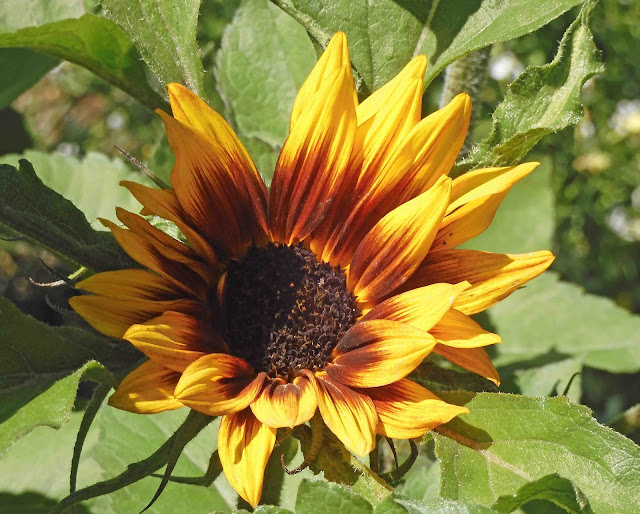 This next one is from a seed packet labeled "Infrared Mix." I've never been sure if the "mix" part of the name referred to a mix of seeds or if it was just the name of the flower. This one is actually different from one of the other "Infrared Mix" sunflowers and so it seems it is a mix of different seeds, apparently all including some red. 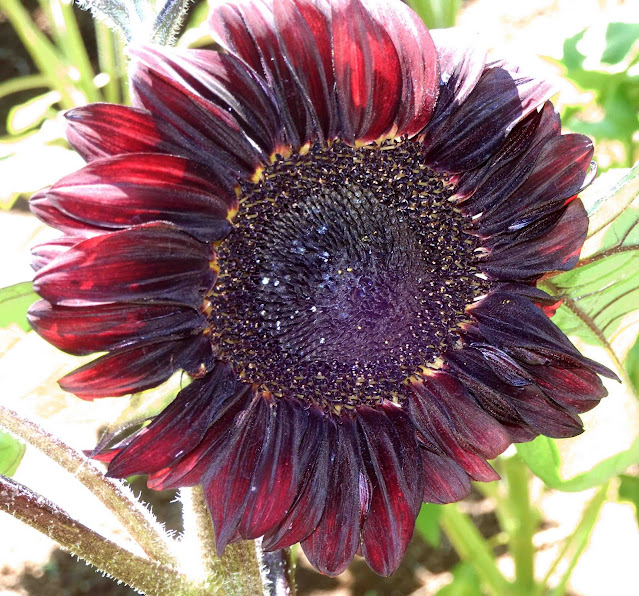 As an example, this flower came from the same seed packet: 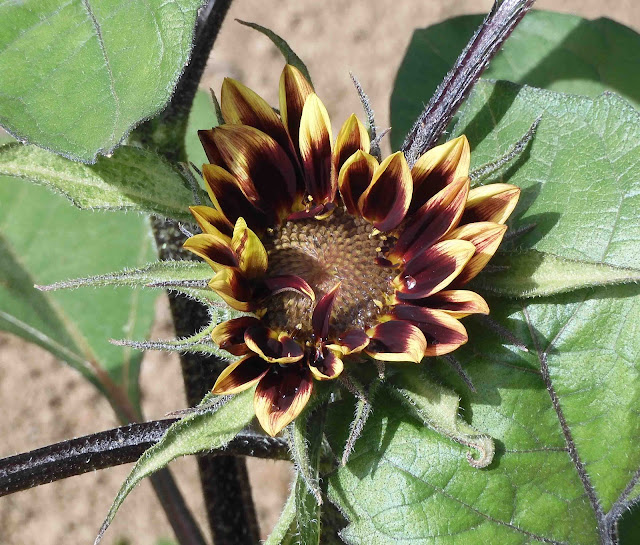 When I was finished with the garden, Mike invited me to share a Mike's Lemonade (no relationship to the actual Mike) on our garden bench. It's a nice place to sit when one has been working in the garden. It's a shady spot with a nice breeze. Smitty decided to join us for some "family time." 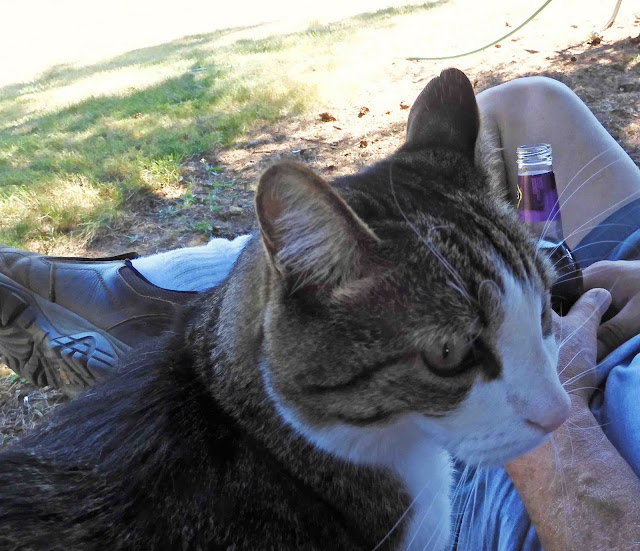 Then he spotted Sadie approaching from a distance. She was under the trees near the RV, hassling the squirrels. We always know where she is because the squirrels are barking at her. 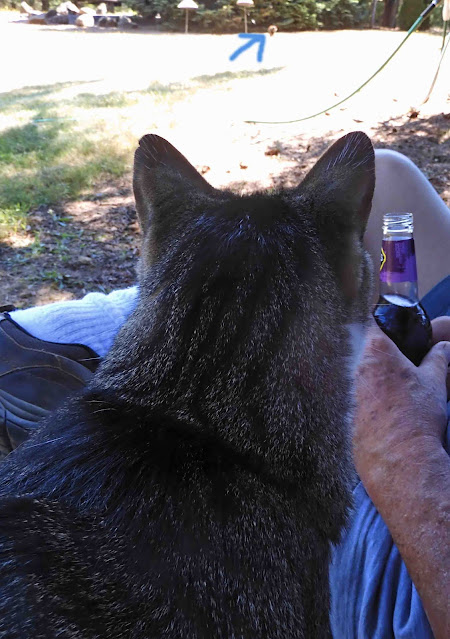 The two of them looked around to see what mischief they could get into. 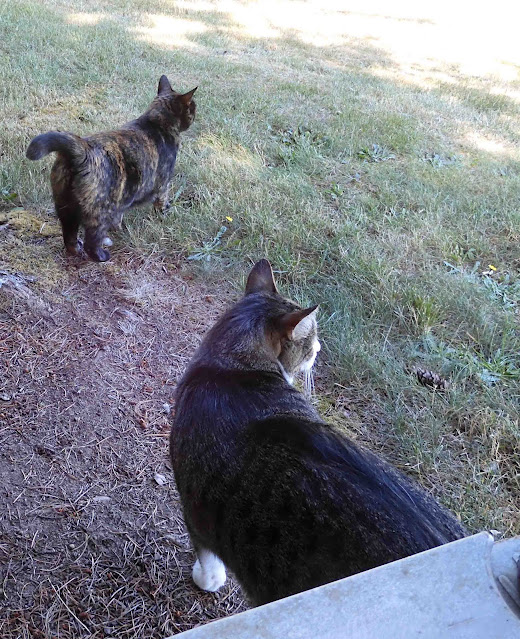 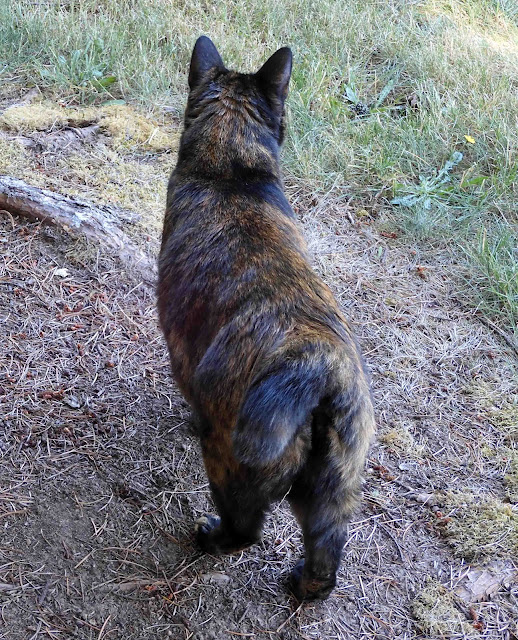 She decided to hide in the plum tree. I didn't have the heart to tell her that her tail is a dead giveaway. Just pretend you can't see her, okay? She's very sensitive about her tail. 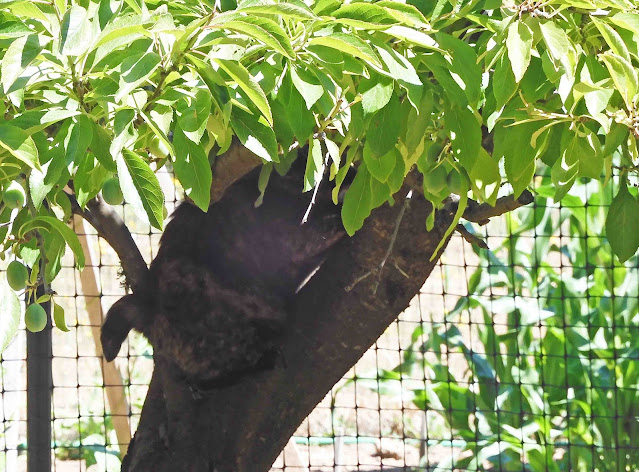 Finally, late in the afternoon, I had some time to do a little more quilting. You might remember I was wishing I'd done more on the petal in the middle of the image below. As I looked at it, I realized I could just add more borders around it. There was another larger petal peeking from behind, and so I filled in with some echoing lines and then with the motif that Lori Kennedy calls "paperclip." I've used that motif many times, and it is a favorite of mine. It's easy to do, and it gives nice texture. 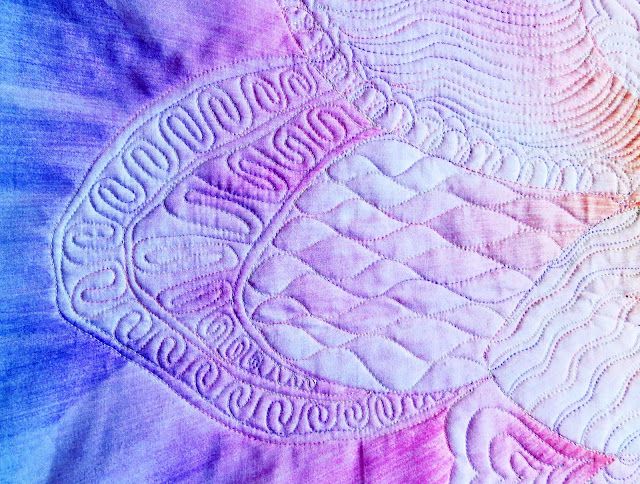 As I move outward from the center, the petals are getting larger, which give me a little more room to maneuver. This next one is filled in with McTavishing. I like how this one looks, and so I'll probably do this again somewhere else. 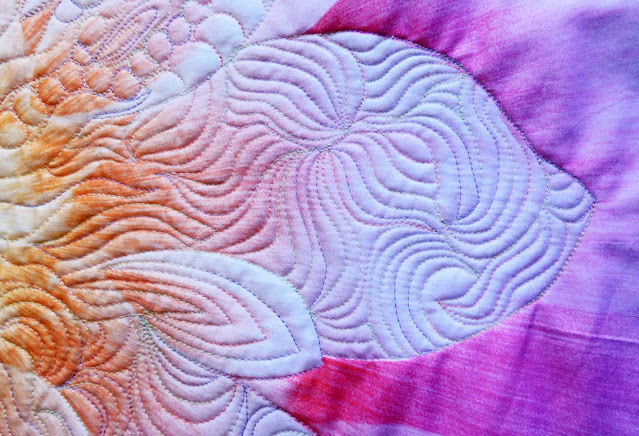 This next one is a smaller petal, and so I did a wavy line grid here. 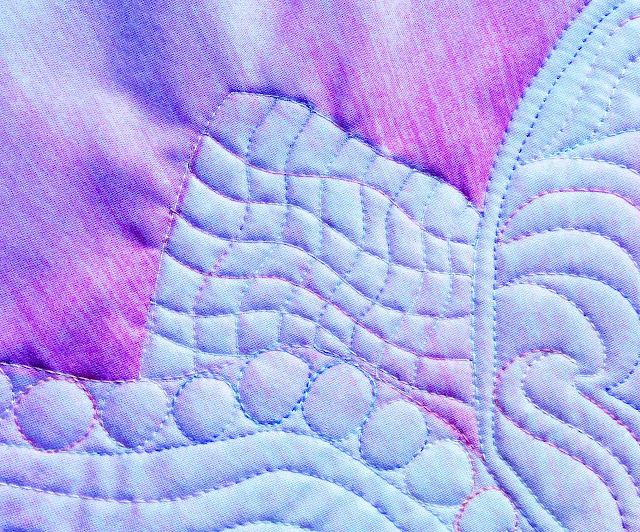 It was close to dinnertime by then, and so I took the quilt off the machine to have a look. Here's how it looks from the top. 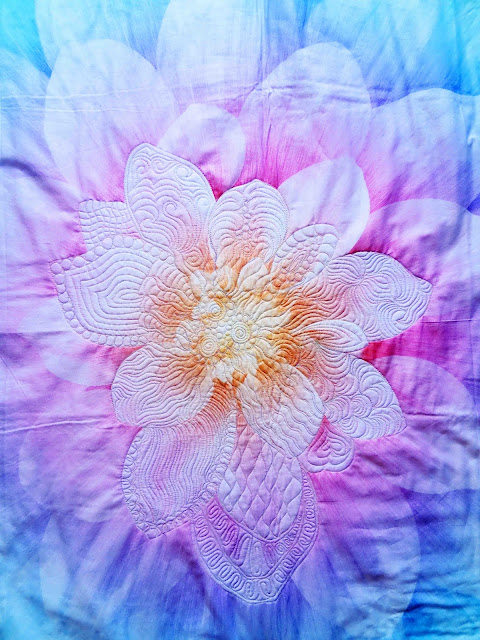 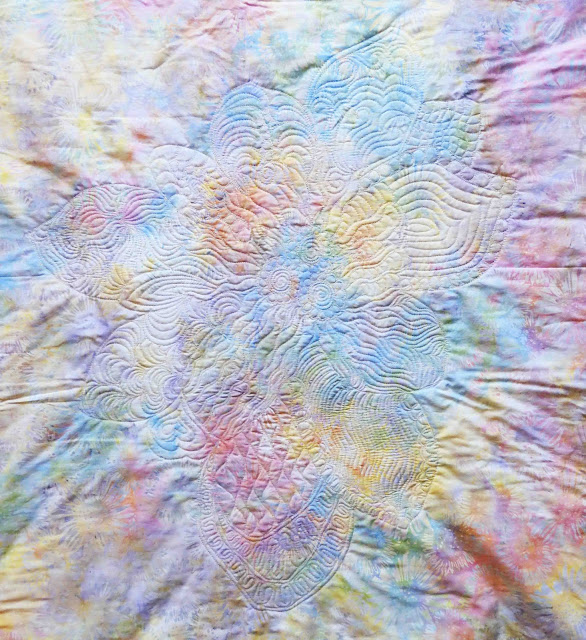 While I had it off the machine, Smitty gave it the "sit test." He gave his approval, but he reserved the right to test it again as I move farther along with the quilting. His standards are strict. It must provide good cushioning for long tails. 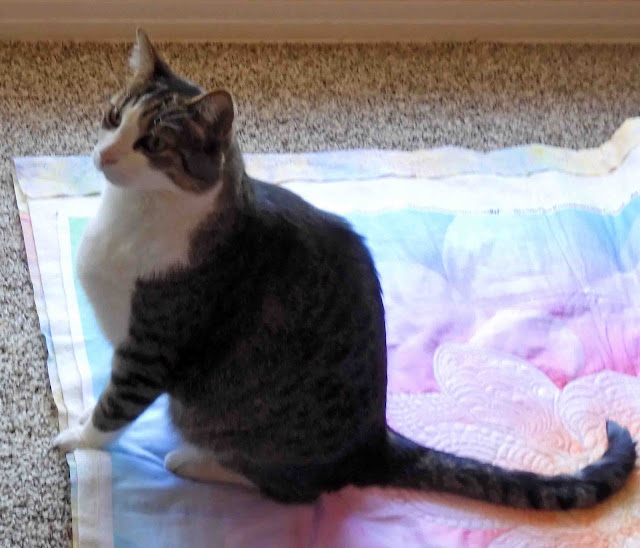 Now it's back on the machine, and I've outlined the next petal. When I get back to quilting today, this is where I'll start. 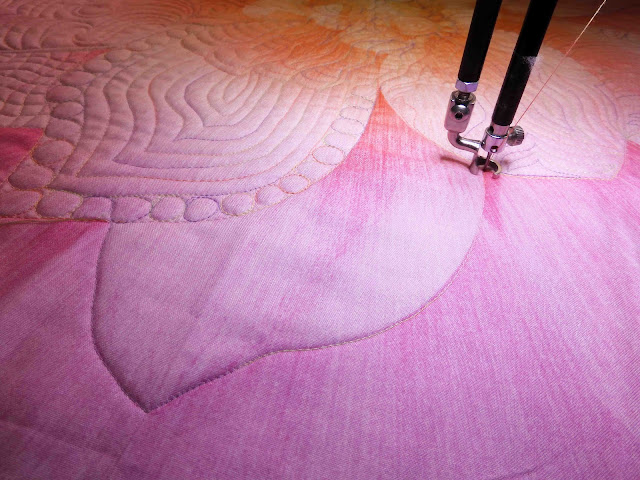 This morning I'm heading off to the farmer's market with Erik and Mae. I don't really need anything, but it's fun to go with them. I could use some tomatoes since I used my last one in last night's dinner. Also, if they're available, I'll pick up some tomatillos for some Apple-Tomatillo Salsa. We've used our last jar. I don't have a good sense of when tomatillos are in season, but maybe it's now. We'll see. So with that, I'm off to face the day. I hope you have a good Saturday.
Posted by Barbara at 7:55 AM

True friends are like bright sunflowers that never fade away, even over distance and time. ~ Marie Williams Johnstone

I do enjoy opening my day to your posts. Thank you . CA Bobbie

Over here we call the little red poppies Corn Poppies as they grow in and around our fields in the country. I love them and actually bought some seeds this year.
Amazing bonus from the blue clematis.

Always fun to stroll through your garden with you. It's keeping you busy, that's for sure! Hope you enjoyed the Farmer's Market with Erik and Mae. Sounds like a fun way to enjoy a Saturday morning!

You've got a gorgeous bee garden. Love all the sunflowers. My Guy bought a seed mix and threw it out into the back corner, but I've not seen any grow yet. They seem to be a fall flower around here.

Sunflowers--my favorite flower. No matter what color they are

There are 2 fields of sunflowers west of us. I noted that they do NOT follow the sun! But they are sure nice to see such happy looking flowers. Thank you for sharing yours.

I always love seeing your 'blooming things' and have to say I envy you the wildflower bee garden. Too bad more people wouldn't do the same. Does milkweed grow in your area? If so maybe you could harvest some seeds in the fall and plant them in that garden for the monarchs. And then, there's the blooming thing you're stitch - also beautiful!