Sew Fourth and Sew On

When I said we weren't expecting rain yesterday, I spoke about five minutes too soon. Since I'm trying to get my hoeing days and my watering days separated, I had in mind to water the flower pots. But then I went downstairs to find it raining. Okay...so hoeing it is then. It was just a brief shower, and by the time I had my gardening duds on, it was finished. There was more rain later in the day, but it was dry while I was hoeing.

Okay, so I've been surprised at the lackluster performance of the green beans I planted. Less than half have come up. When I was out in the garden last, I noticed one was pulled up by the roots, and the seed was still attached. It was just lying on the ground. And so I started thinking about this. My friend Sue warned me the crows might pull up the freshly sprouted seeds. I haven't seen that, but I decided it might make sense to cover the beans with the gutter guards I removed from the rows of corn recently. As I walked to the garden, just to prove a point, I saw this: 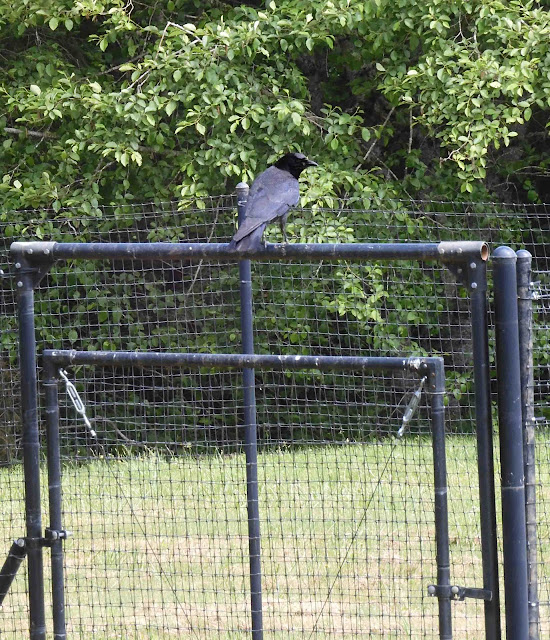 Hm...and I took that as a message from the universe to cover up those bean babies. The seeds are planted in a triangular configuration around the bottoms of each pole, and so these gutter guards aren't exactly right for this task. Mike says he can cut them in half, but these should do for this year's garden. Next year, we'll make them some custom gutter guards of their own. 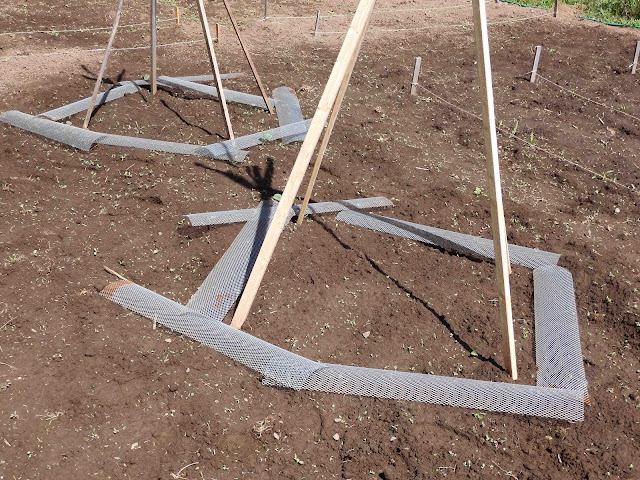 Hopefully, I can get the rest of the seeds growing without any more crow funny business. And I can't actually blame the crows for sure and certain, but I am suspicious.
Walking around the rest of the garden, I noticed all the flowers on this newest "Edda" clematis. It's done a good job for only being in the ground a few weeks. 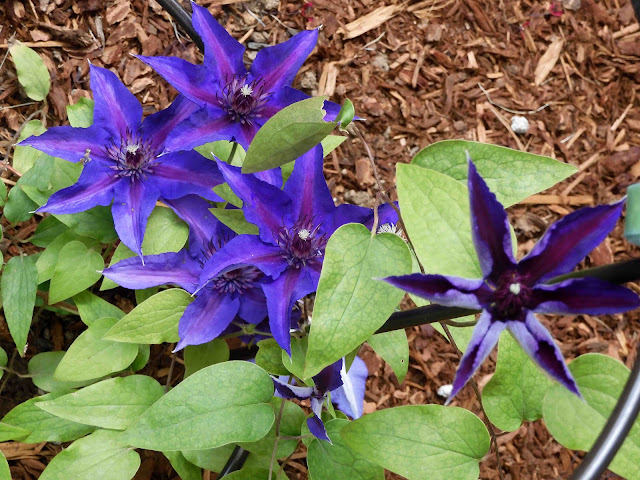 The Rouge Cardinal clematis is no slouch either. 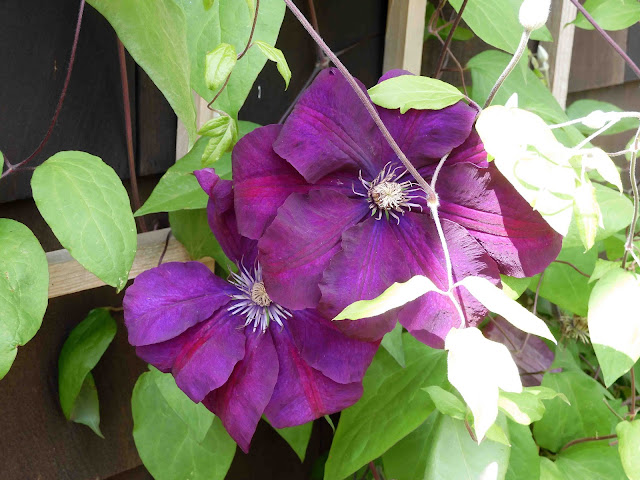 And look at this Fairy Princess peony. So pretty right now. It's been the best performer of all the peonies. 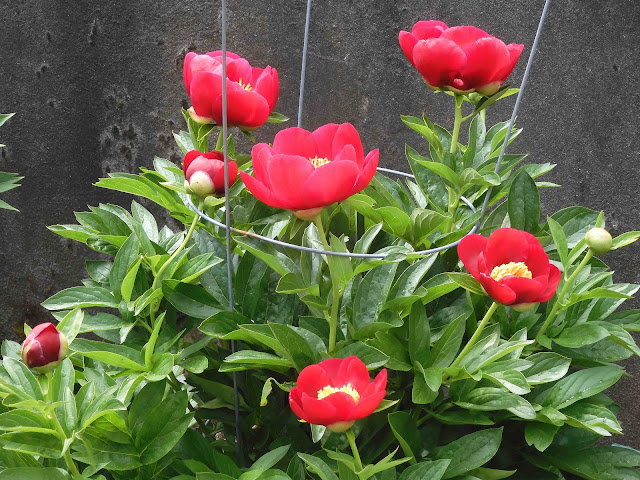 The lavender is heading up. I expect we'll have flowers here in the next few days. That means we'll be enjoying Bees Knees cocktails soon. We could enjoy them now since I have lots of dried lavender blossoms. They're used to make the tea that goes into the simple syrup. We like to keep the cocktails as a seasonal treat, and so we'll wait until the lavender blossoms appear. 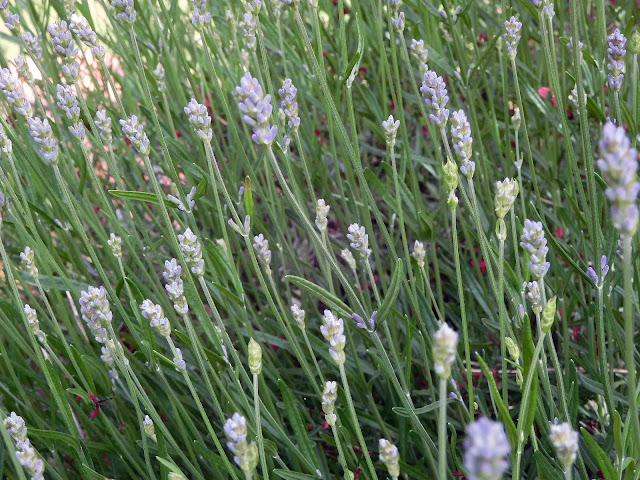 It was time for sewing after that. Sadie was my sewing cat yesterday. She was eager to get started. 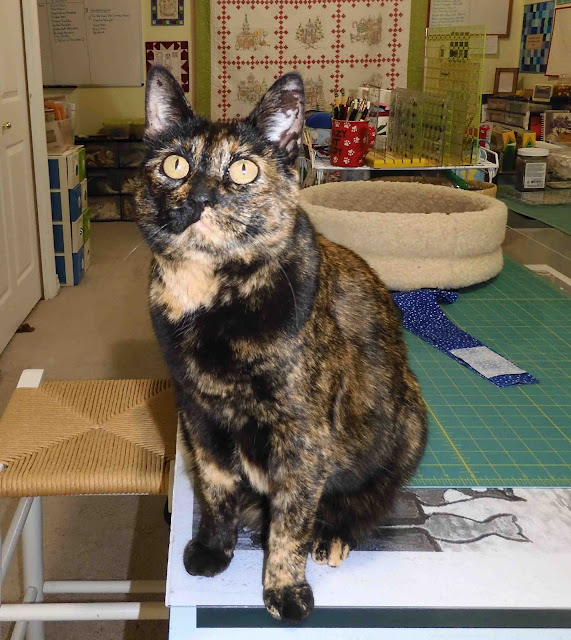 I finished quilting "In the Good Old Summertime," and then squared it up. 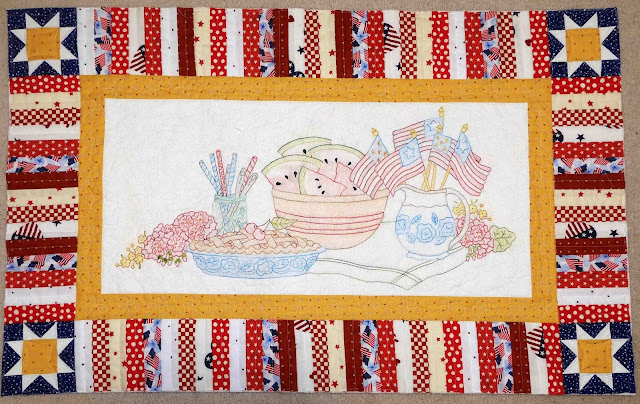 The only thing left to do was to add the binding. 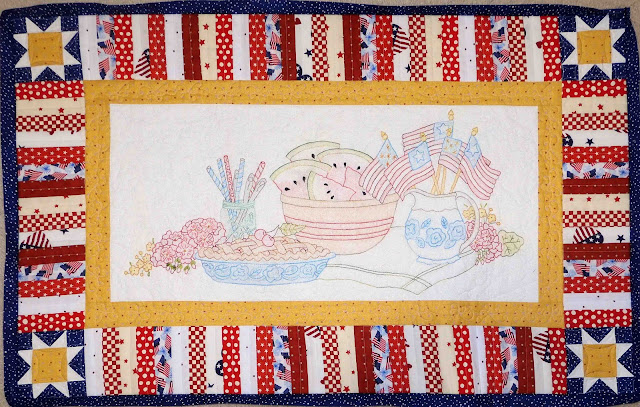 I'll get started on the hand-sewing today.
But I still had one other small quilt to add to my trio of quilts for Fourth of July display...this little "Liberty" sampler from Kathy Schmitz. This one was so much fun to stitch. It ended up at 12 x 13.5 inches after I added a border to it. 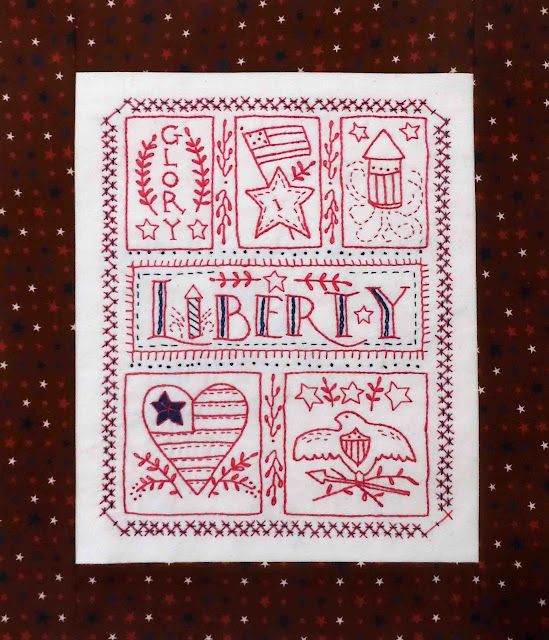 For the back, I chose what remained of this star fat quarter. 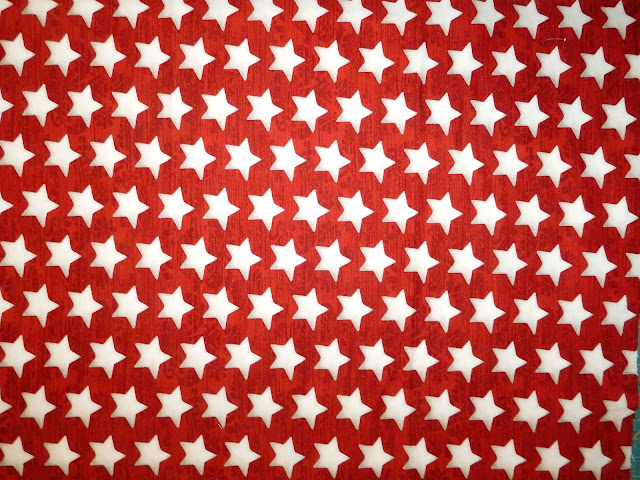 This is what's left from a regional print I picked up for the Shop Hop 2.0 quilt. If memory serves, the last polaroid block was made using this fabric I found at a Kelso, Washington, quilt shop the day the Semper Fi quilt was delivered to my friend Andy. 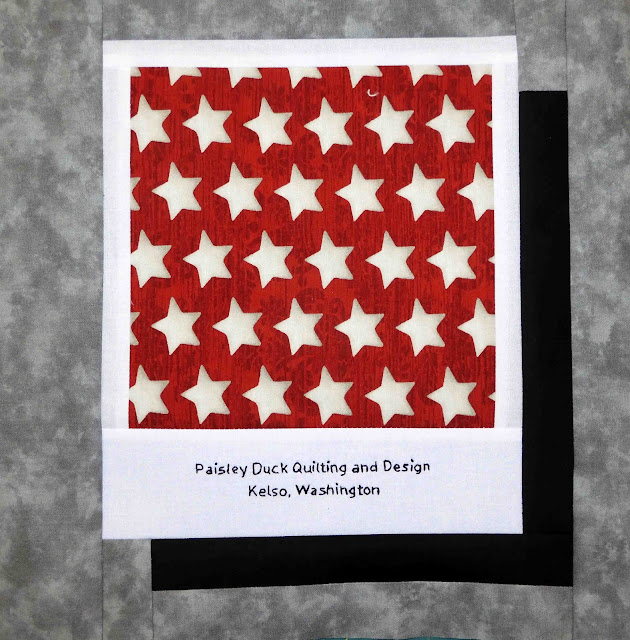 After that, I went in search a piece of scrap batting and sandwiched it for quilting. 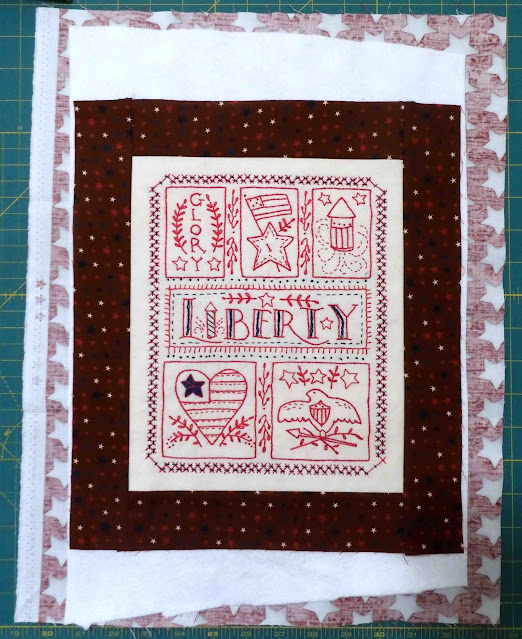 Then I did some simple straight line quilting... 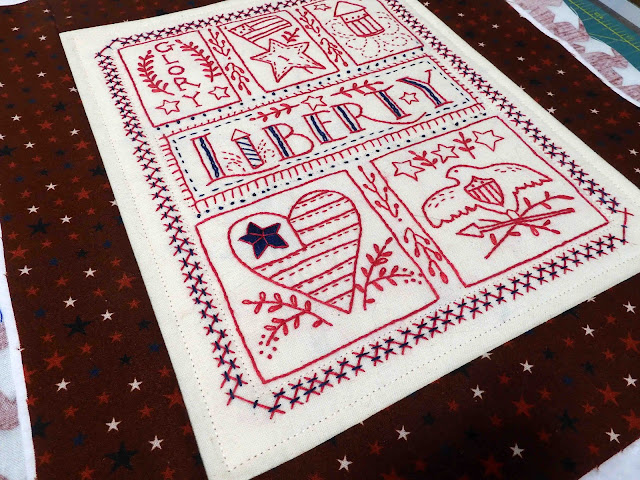 And then added a binding. Now it too is ready for hand-stitching. 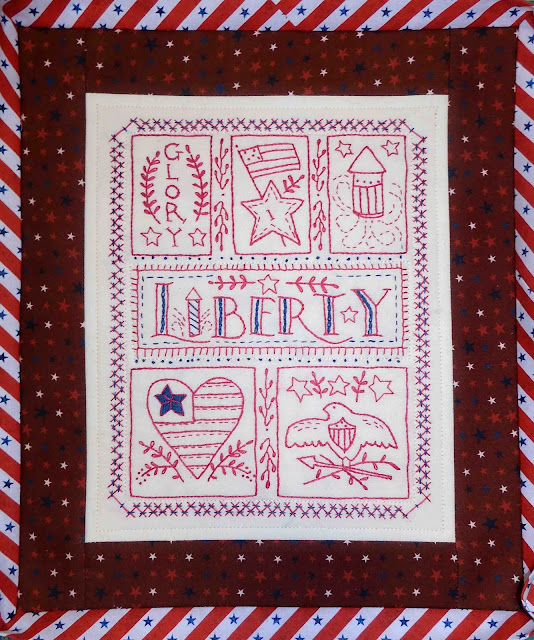 As I was finishing off the binding, Sadie gave it the "sit-ability" test and purrnounced it acceptable. Her tail end was very comfy. 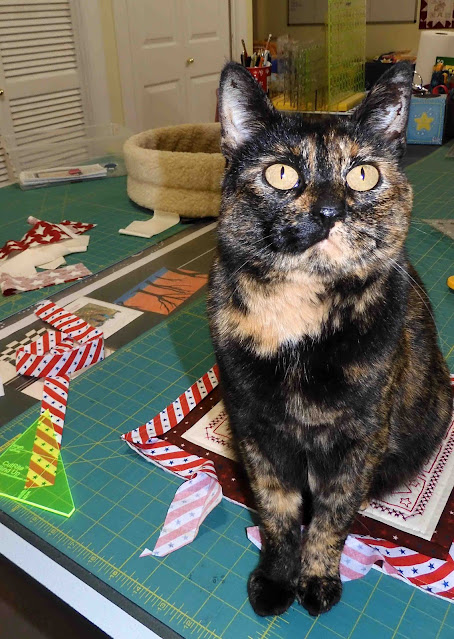 With so much sewing work, she was ready for a nap by then. 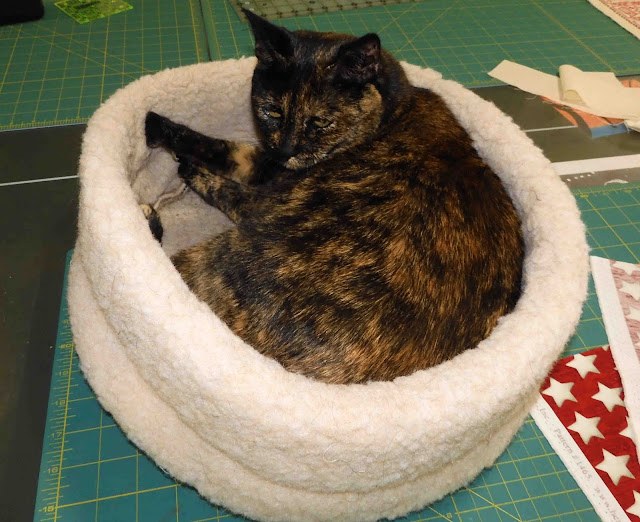 With all that sewing, I didn't make any progress on the farm quilt yesterday, but I'll get back at it today.
It's Sunday morning, and that means blueberry pancakes are on the horizon. It looks as if it will be a cloudy and cool day. With the several rain showers we had yesterday, there's no need to water the flower pots. That means it's going to be a NBS day. There's plenty of hand-stitching to come. Let's hope my thumb is up to the job.
Posted by Barbara at 7:05 AM

It is better to listen to a crow that lives in trees than to a learned man who lives only in ideas. ~ Kate Horsley

NBS is my new favorite acronym!

In the good Old summertime borders and cornerstones are just so wonderful, Barbara--you always come up with such creative ones!! I love it.
[So much so that I HAD to order that embroidery to work on myself...I have the winter Ice Skate one, but feel I want to work on it in the Winter;))) that's my excuse and i am sticking with it!! ]
I love that Rouge Clematis--so gorgeous...
Crows and squirrels have a lot to answer for in the garden!! the Liberty is
really so pretty with the starry border (another WIN!!)
Enjoy your Sunday hugs, Julierose

You're really making headway on all those projects. I love the vibrant blue of that clematis. I want to add some new ones, but the prices are more than I want to pay and I need better structures on which to grow them (more money, as my husband is not at all handy). No rain here, so the daily watering continues.
Pat

The annual issue of getting the green and yellow beans to grow. We had to resort to starting ours in garden boxes on the deck and when they have large true leaves Den transplants them one by one in the garden. Tedious but it works.

Crows are pure evil. Good luck with your beans.

Oh so much to enjoy in your post. Lovely quilt and so much beautiful hand stitching/embroidery too. Your clematis are especially beautiful. Thanks for sharing photos of your garden...always interesting to me and I love to see the blooms.

Love the little quilt! It's just in time for July 4th. Crows are so smart. I love watching them and sometimes put bread out for them to watch how they approach the area. I wouldn't like them so much if I were trying to grow beans though.

Ah - the culprit crows - no doubt you're right in thinking they're the thieves. You're all set for decor for the 4th - nice to be ahead of the game.

Ok, catching up on your posts since my inbox is not being helpful as of late. Anyway, you are ready for July, and I need to get my patriotic decor out. If I starting thinking on that now, maybe I'll get it out in time! Sadie is looking very helpful, but a girl does need her beauty nap!