Quilting on the farm quilt is coming to an end. I believe I'll get it finished today. Finishing off the quilting will be the day's top priority, although I have some other non-sewing things on my list as well. Yesterday I quilted in some clouds in the sky and some ripples in the hillside background. 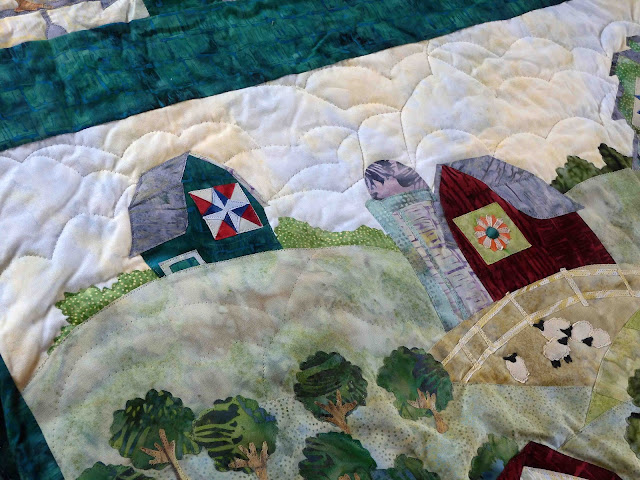 As I've been doing the top-stitching, I've been trying to clip all the jump stitches and thread tails. I took the quilt off the machine at this point and then ran my hands over the top looking for any I'd missed.
The back was a different story. For that, I went over it with fine tooth fingers, turning it at all angles and clipping as many as I could see. Standing at different angles and turning it in different directions revealed any I'd missed. And I'm sure I've missed some, but I'm calling it good for now. I'll probably find more as I sew on the binding. For now, here's how it looks from the back. This first image is the basket section where I started. 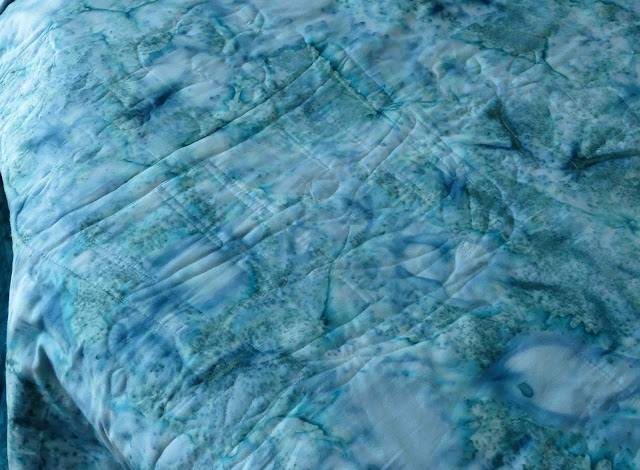 Here, you can see the cow. 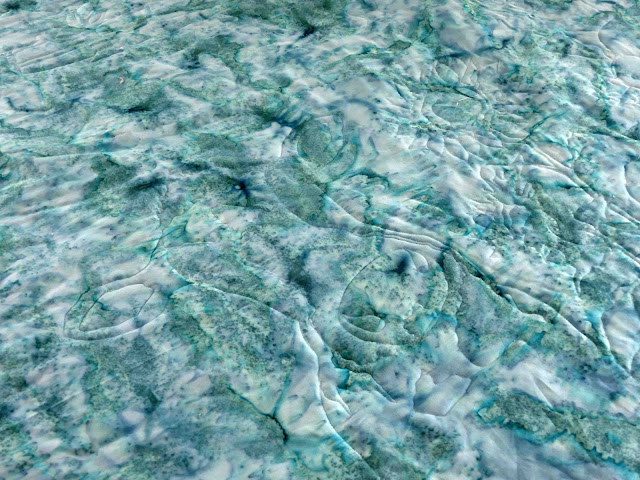 This next image shows the goat with a quilt in his mouth. 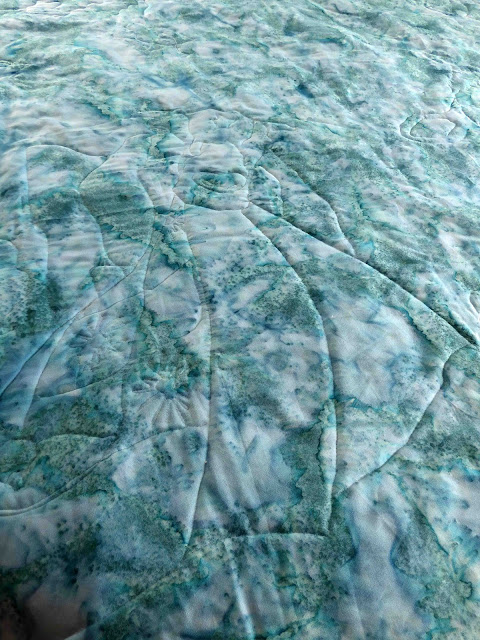 This next image shows the pig and the sunflowers. 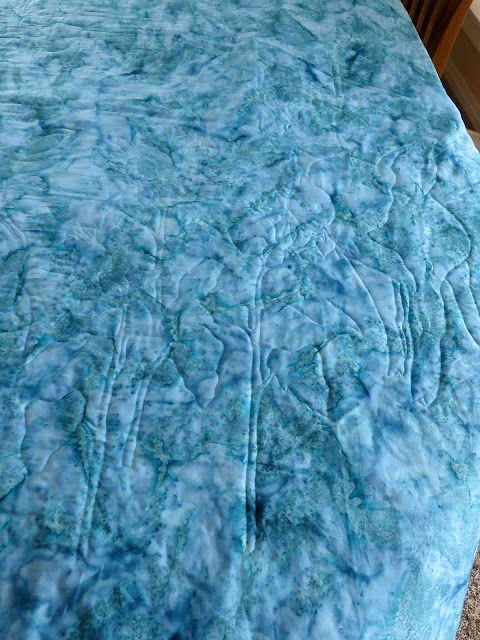 I chose a simple loopity-whoopity motif (technical quilt terms), and I was just barely getting a start on quilting the borders and the sashings. By then, though, I was kind of tired of wrestling with it, and my shoulder was moaning. I decided to quit for the day and take it up as today's task. 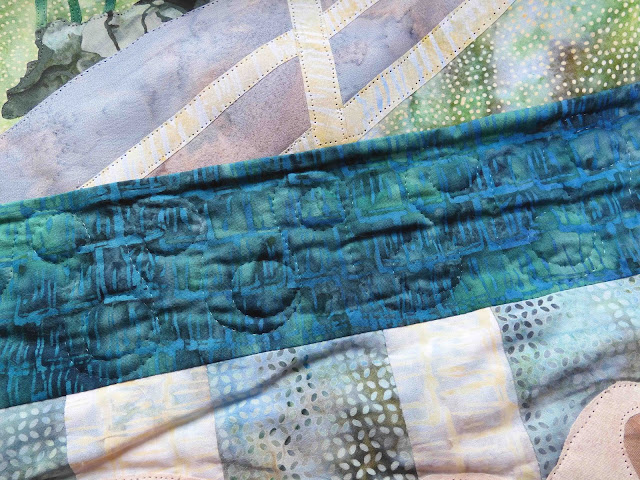 Lately we've been watching the news with Shephard Smith. We like Shephard, but mostly we like that his show comes on at 4:00 p.m. By then, we're both ready to call it quits for the day, and it's early enough that I can sit down and watch, rather than listening from the kitchen while I make dinner. And all of that to say that I'm getting double the slow-stitching time these days since I can sit and stitch while we watch the news. Yesterday, I finished up the first/next hoopful of Calendula Patterdrip's Cottage. 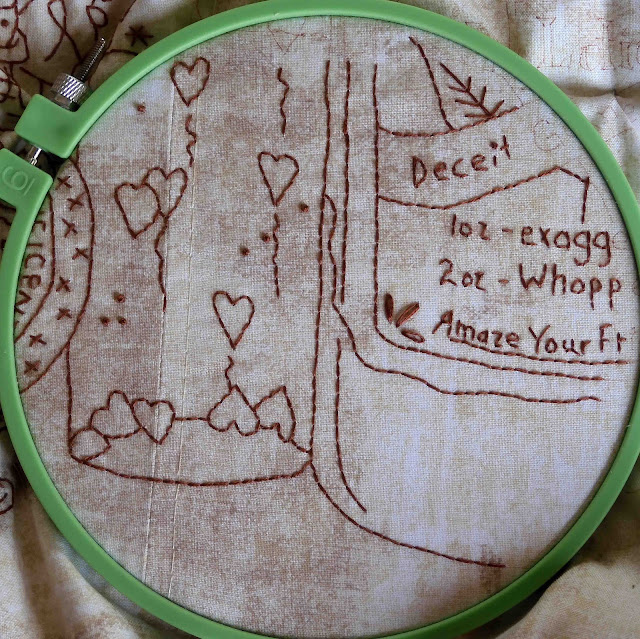 Now, I've moved the hoop up to the next section. It's always a question whether to move from side to side or else up and down. In this case, up and down will be the pattern. It's a large piece and difficult to keep it tidy and easy to hold. Now that I'm in the middle section, there's less drag from any one side, if that makes any sense. It's a little easier on my thumb. 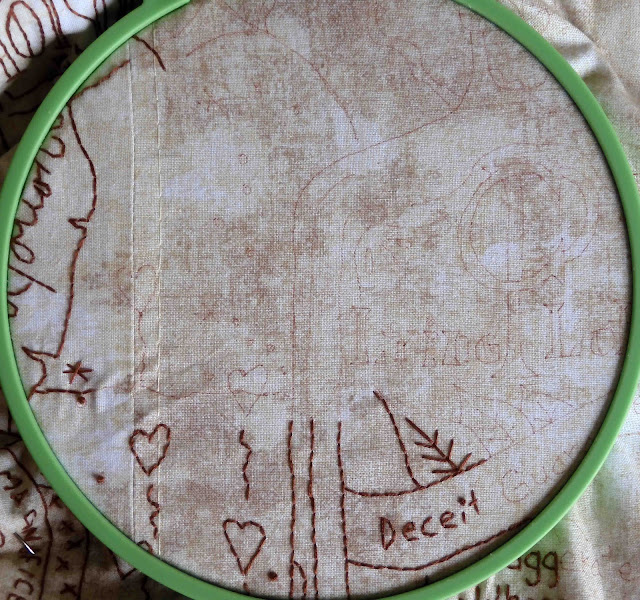 Regarding my thumb, it continues to improve, but it still hurts like a mother at times. I've figured out that splinting it during those hurting times will give it a rest and let it settle down some. I don't know if it will ever stop hurting, but I'm optimistic.
After dinner, I realized I hadn't paid the tomatoes a visit in several days. I went out and brushed all the flowers. They were given a shot of fertilizer the other day and there were lots of flowers and a few little tomatoes. The plants are looking good. 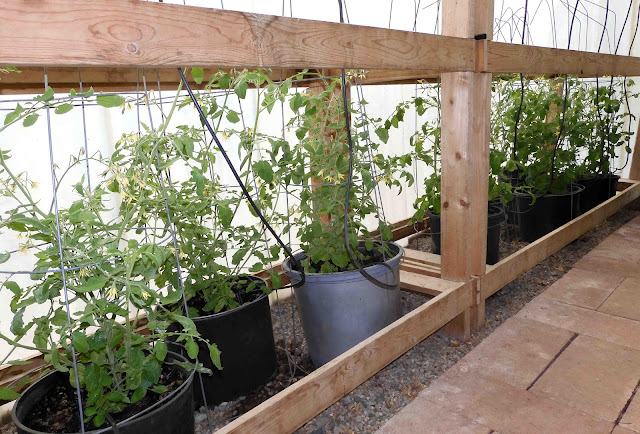 The poppies are mostly fading, but there are still a few buds. The rest are going to seed for next year's crop. They've really put on a show this spring, and I've enjoyed them. 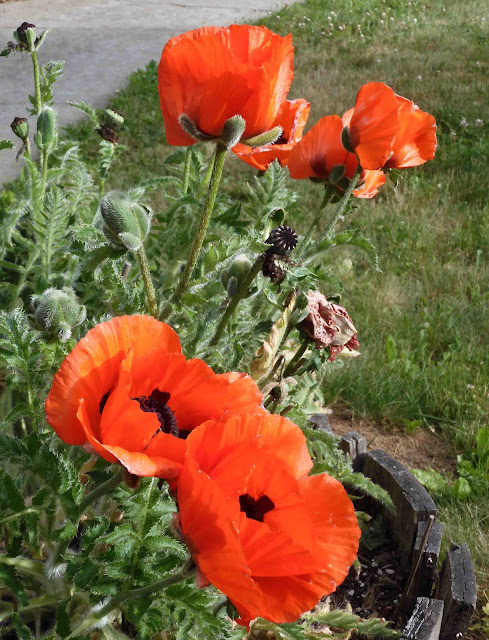 Now the lavender is blooming. Yesterday, I pinched and rubbed one of the flowers. Such a lovely fragrance. 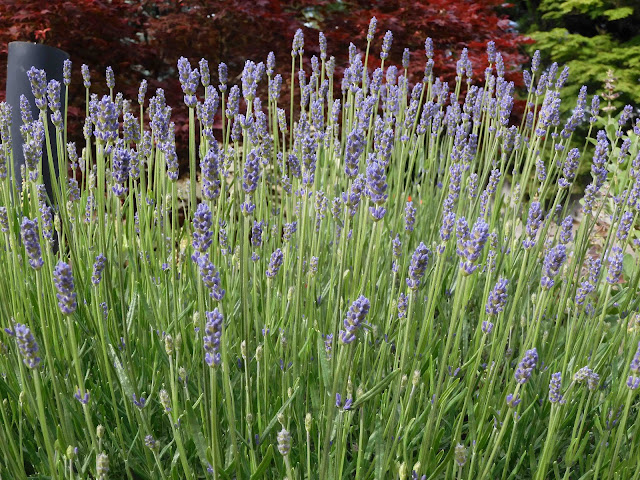 If the weather ever improves, I think we'll be ready for Bees Knees cocktails. They seem like a summer drink to us, and so we're only motivated to make them on a sunny day. Today is not such a day. As I'm writing this, it's raining hard. And, honestly, we've had enough rain. Please bring on the sunshine.
So that's all I have for you today. Time for breakfast and some slow-stitching. A finish is in my future. It will be a big relief to have the farm quilt to binding stage by day's end. After nearly five years, I'm more than done with it.
Posted by Barbara at 7:24 AM

In the silence, I could hear the distinct sound of goats maa-ing in the barn. Lying there listening to them made me smile, too. I'd always loved goats - every one of them different from every other one, and all of them goofy and playful. ~ Steve Watkins

I know the weatherman keeps saying we need the rain and our yard is really dry but I really wish it were not raining this weekend. My granddaughter and daughter are tent camping with their scout troop this weekend. They are not going to be far from home and I think they may actually have a covered area reserved for meals but they are still going to get wet. And today is field day at school so that will be wet also.

Good job getting that Farm quilt done...your quilting show up really well on the reverse--nice!! Hope your thumb calms down...I am resting my thumb today...Will try to send you some of our sunshine--we need rain so perhaps we can swap? If only, right?
hugs for a great weekend Julierose

All that technical jargon in reference to quilting terms - who knew! I imagine there was a bit of whoopity-dooing going on when you finished the quilting. (and yes, that's another technical term!)

Yay for getting the farm quilt done and scratch that task off your to do list. I think Bee's Knees to celebrate might be just the thing. I hope your weather clears soon so you can enjoy one in the sunshine. For the first time in days, we have the windows and patio doors open. It's still warm, but the humidity has dropped considerably. Yippee!

We are in a drought right now. Did not get enough snow this winter and are also way below normal for rainfall. It is hot and humid,but humidity doesn't water the ground so send the rain this way.

The quilt is looking really good.

I love the quilting you are doing on the farm quilt. I love seeing each block in detail as you quilt it.