Everything is going to move fast this morning. It's my first day of jury duty. In our county, we call in a day ahead to see if we're going to need to report the next day. (The orientation session was canceled, thank goodness.) When I called in yesterday, I received a rather cryptic message: There were two check-in times for jurors with numbers lower than mine. When they got to my group, it said to report at 1:00 p.m., but that I should call at 11:45 a.m. to see if I'm still needed. If not, I'll have the afternoon to myself. Problem is, I have about an hour's drive to the courthouse from where I live. So I'll have to go through all the motions to get ready to leave, and then, maybe I won't have to leave. I'm telling you, the drama never ends here at the Three Cats Ranch.

Take this cat, for instance: 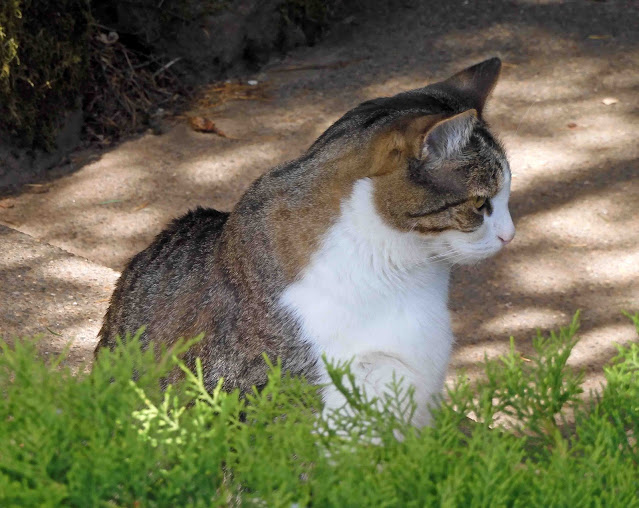 He was following me around on my morning walk, but then sat here for most of the morning on squirrel patrol. He's caught six squirrels so far this season. We were considering getting him a little collar and putting notches in it for his squirrel collection. The more the merrier, I say. And, yes, the squirrels are cute. They're a lot less cute when they're digging into the greenhouse, or digging up flowers in my flower pots, or eating the flowers, or any of the other hundreds of ways they make nuisances of themselves. Go get 'em, Smitty. Good kitty.
As for my walk, I noticed the sage blossoms are starting to open. I'm going to use these for making sage blossom vinegar this year. I'm hoping the chives will make a comeback by next year, but for now, sage blossoms it is. 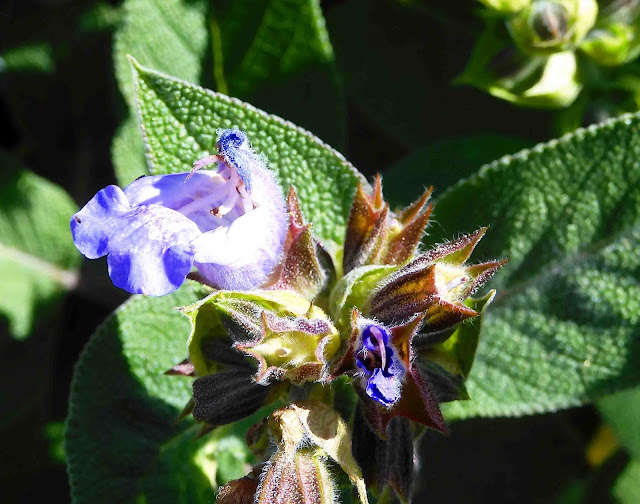 A third Joker peony has opened. You can see there is another bud on the left side of the image below. 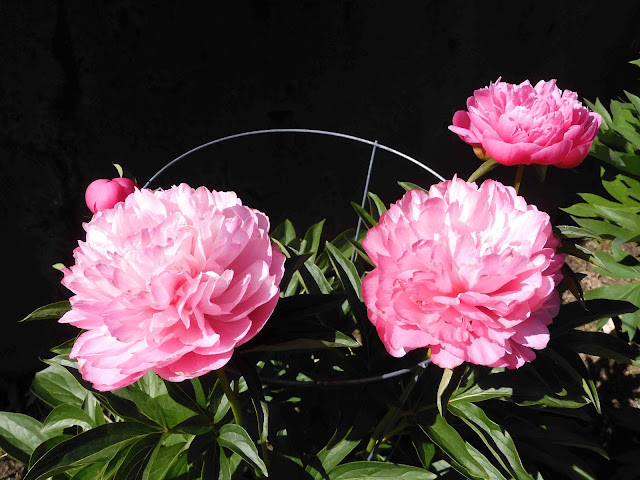 By the end of the day, it too had opened. 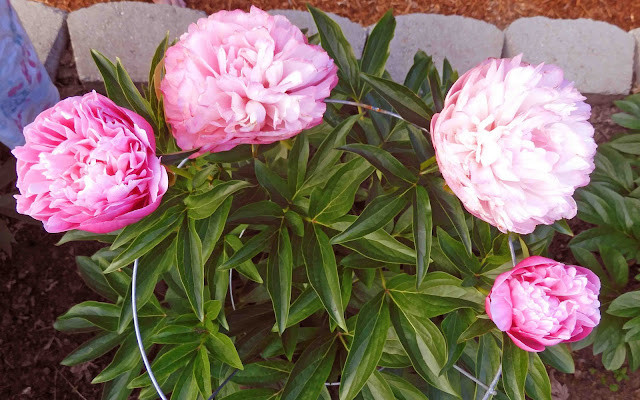 And, yes, the Rosy Prospects peony has broken my heart once again. The bud I've been watching has clearly gone to seed without blooming. 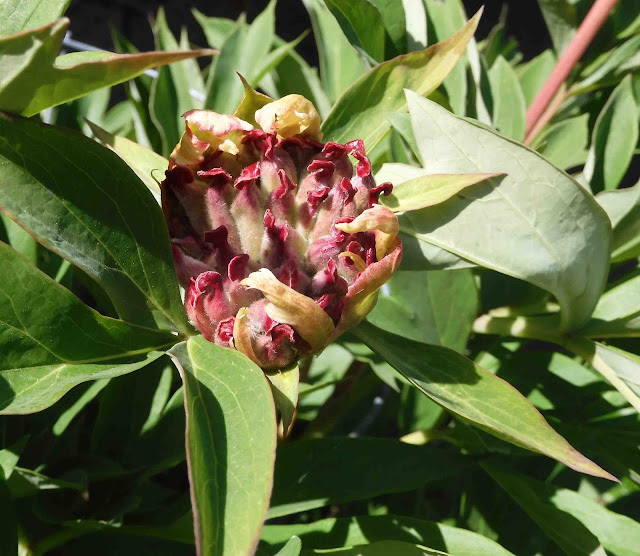 There's another bud on this plant. Maybe it will turn into a flower. If not, I'll be digging up this plant and burying it deeper this fall. Maybe that will get it flowering. 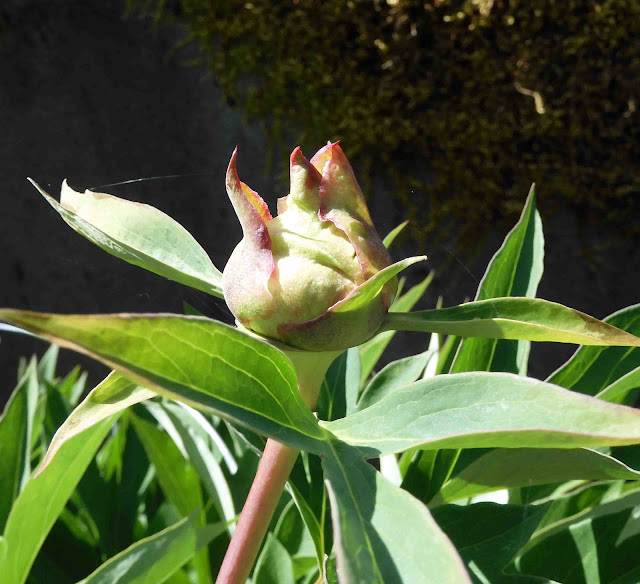 The vegetable garden is giving me reason to celebrate. The green beans are taking off and some are getting their true leaves already. 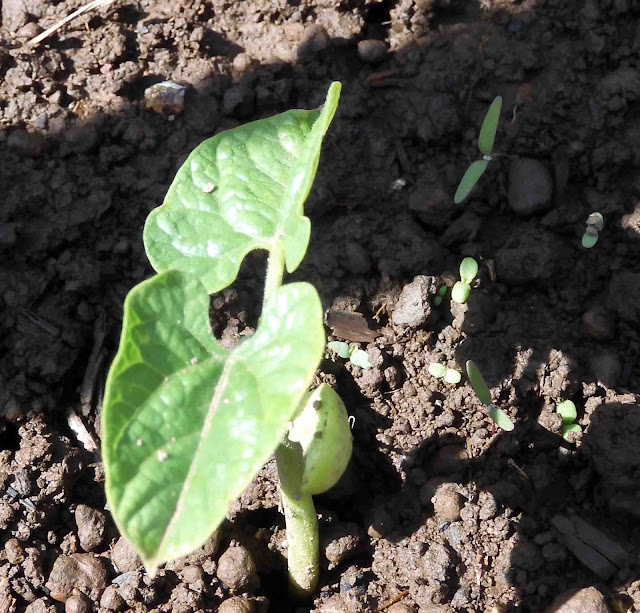 This little corn sprout was growing up in the space between two of the gutter guards. 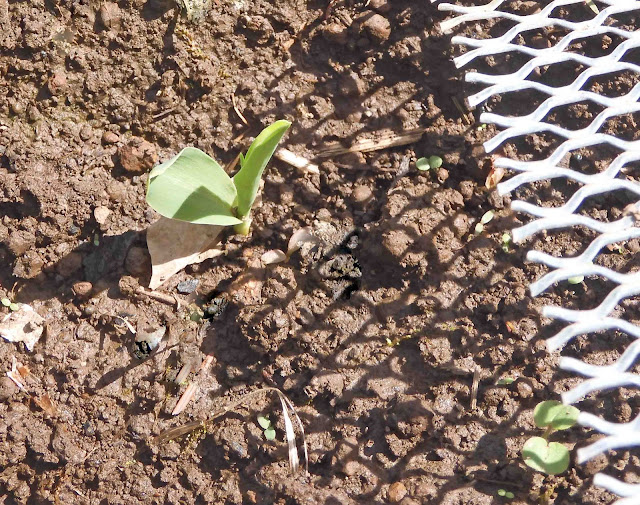 As I looked I noticed a lot more growing up through the gutter guards. Now I've uncovered most of them. Only just a small space on two rows remains covered. 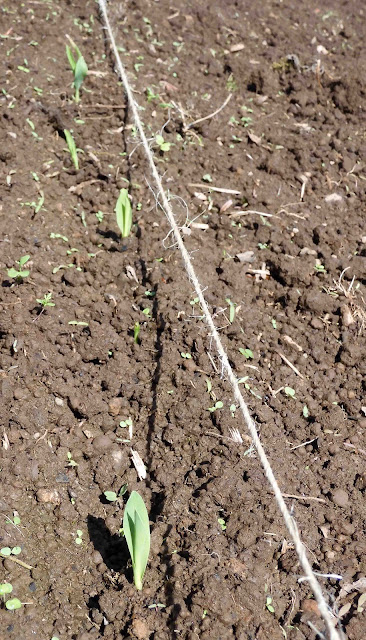 Also, I noticed some beets coming up. They're pretty small, and so difficult to capture in an image, but I can tell them by the little bits of red on their stems. 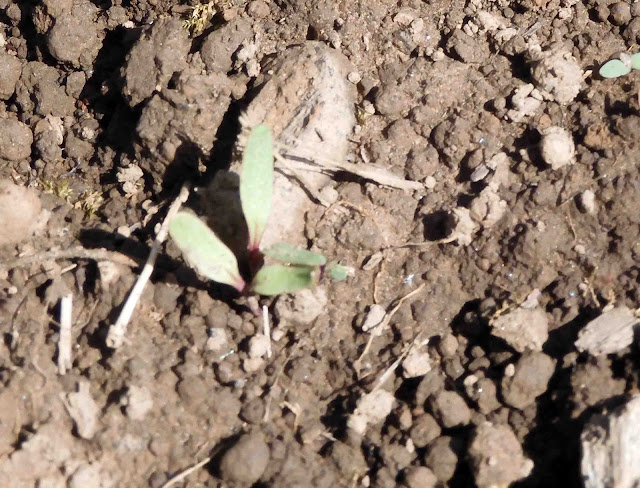 There's a green sheen where the "bee garden" is planted. There are plenty of weeds growing up here too. I'm hoping the flowers will get a big enough head start to shine over the less desirable stuff. Whatever happens here, it will be humming with bees fairly soon. 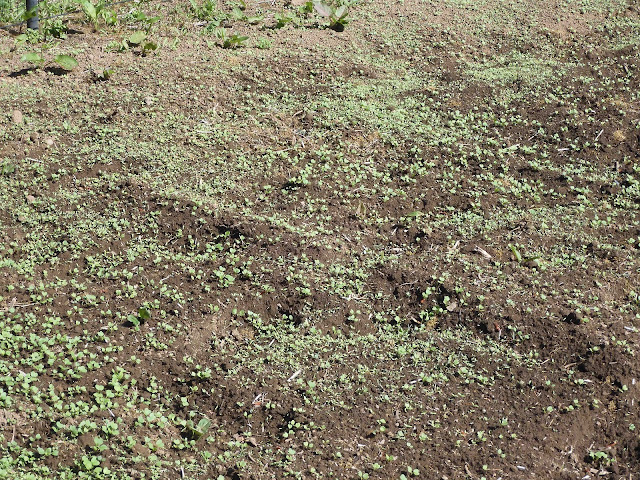 Okay, so I filled the bird feeders and then headed inside for my hour of quilting. Things were going along swimmingly until Big Foot showed up. That slowed me down considerably. 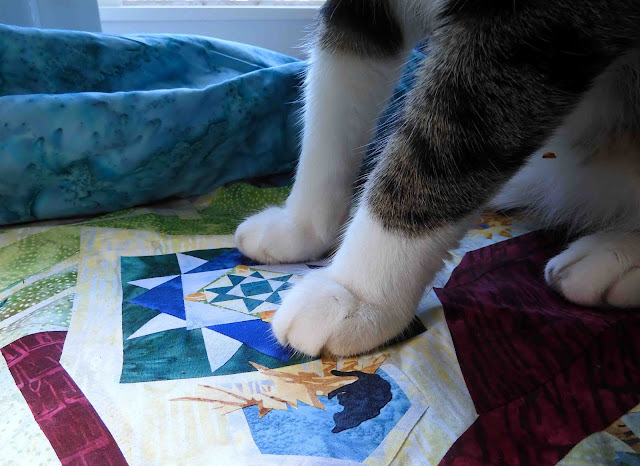 I probably spent a little more than an hour on this, and I was about 2/3 of the way finished when I decided to stop. I've quilted from the top down to the sunflowers and the lower fence. All the barns, trees, and the rooster are finished. If I have time for quilting this afternoon, I'll be able to finish this section, and I'll start on the sheep to the right. 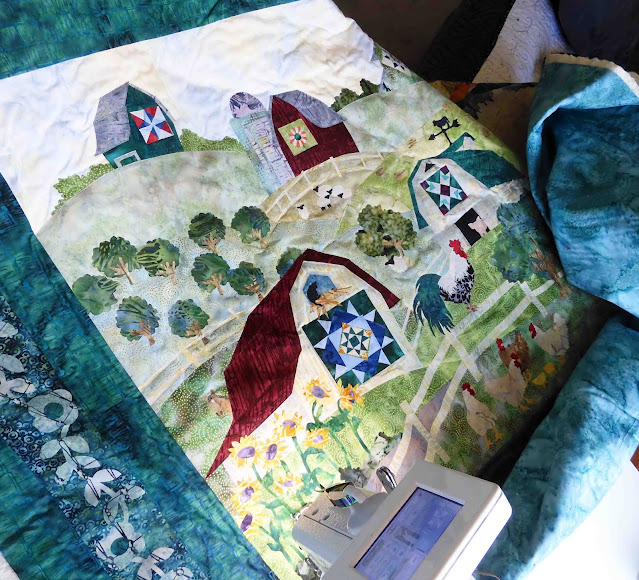 Back downstairs in the sewing room, I finished the Ohio Star cornerstones I was working on. 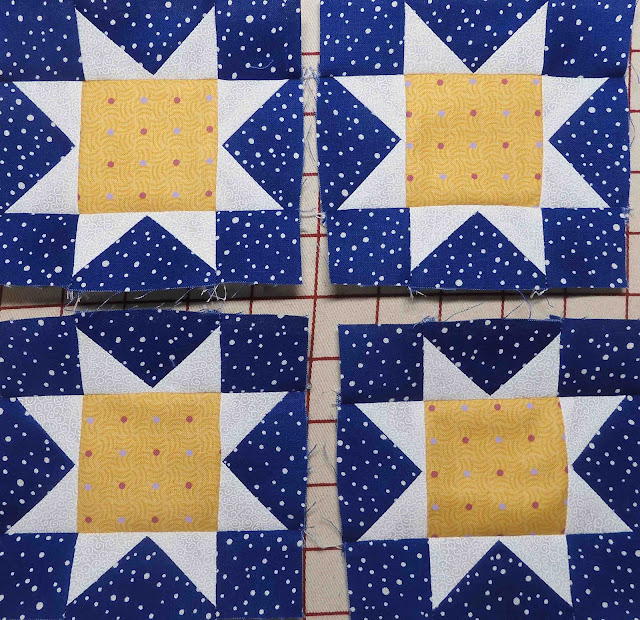 Then, I was able to finish up the rest of this little runner top. There was one inner border. 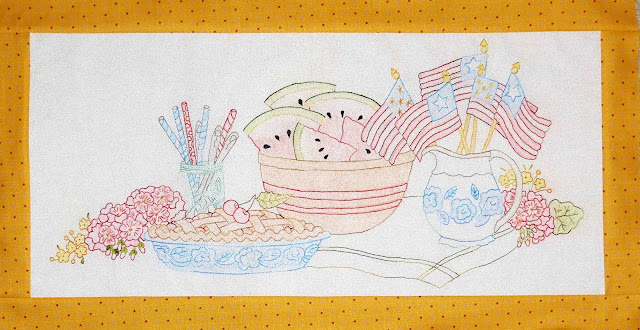 Then I pieced together and added the outer border, and my top was finished. 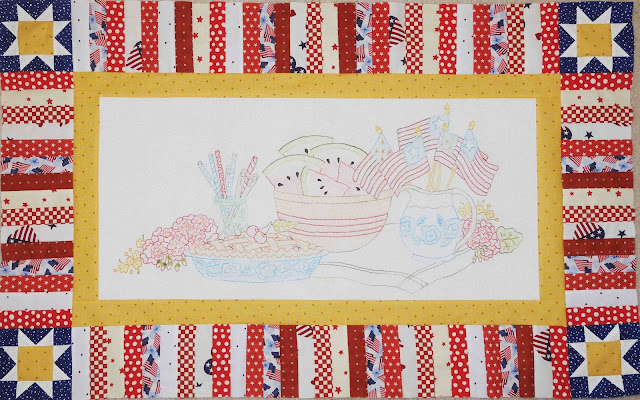 It still needs quilting and binding, and this will be my monthly goal for June's

The party starts today, so don't forget to link up!
So, I want to fill the bird feeders this morning, and I want to hoe the garden. I'm kind of on hold until I know whether I have to report to the courthouse, but I want to keep the weeds controlled in the garden. The flower pots need watering too. All of that needs to happen this morning because it's going to be a hot day.
The June block for the Posies quilt has been released now, and we're ready to start with purple for the Rainbow Scrap Challenge. If there's time, I'll get the embroidery traced out for that. These are the blocks I have for this quilt so far. 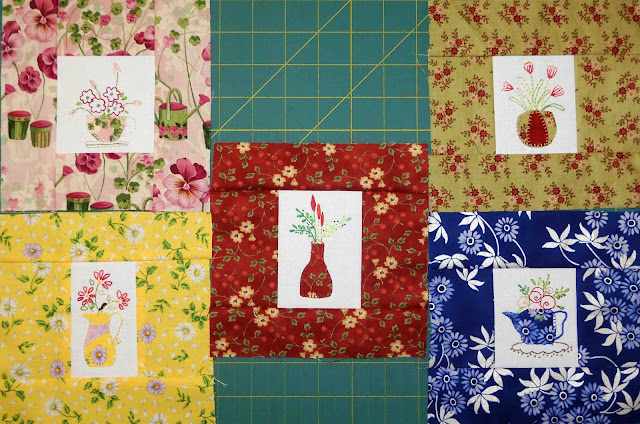 The only other thing on my agenda for today is to get back to my quilting. I'm hoping I'll be home to work on it this afternoon. If duty calls, I must answer.
Before I go, I wanted to show you what we saw in the grocery store at our last shopping trip. I think I need these, don't you? 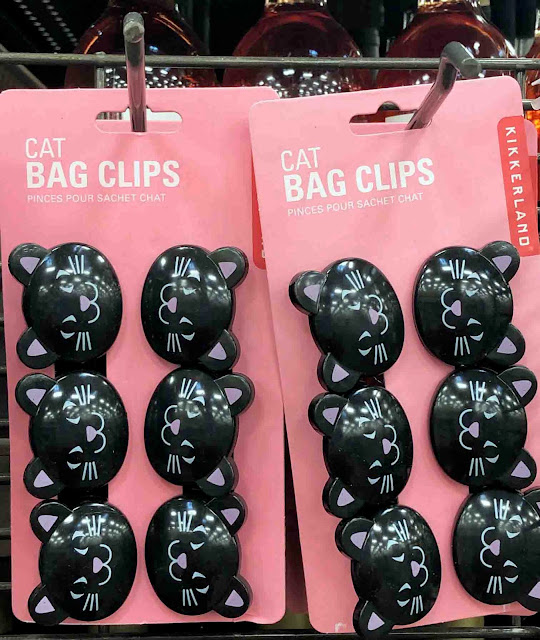 Cultivate your craft. Water it daily, pour some tender loving care into it, and watch it grow. Remember that a plant doesn’t sprout immediately. Be patient, and know that in life you will reap what you sow. ~ J.B. McGee

Such nice progress (in spite of Big Foot's interruption!!)

Wow, that jury duty timing doesn't leave much leeway, does it? Hope you get to spend the time in the garden not in the courthouse.
Pat

What a messy way to handle jury duty, but I wonder if that is due to the virus? Instead of calling all the potential jurors at once, spread them out a little? Or maybe that's just the normal. One never really understands the ins and outs of such situations...even if in the middle of them. The bee garden will be wonderful. Bees don't discern between wanted and unwanted blooms, so I'm sure it will all be just fine to them. Good job bigfoot on the squirrels! We have five or so babies growing up in our front yard and they are cute and fun for all to watch, but cats are predators and squirrels are prey, so things are as they should be. We live on a busy road, so the cats are not allowed to roam free, but if someone gets into their outdoor enclosure, the only rule is that it is an "outside toy." I'll worm them later.

GO SMITTY GO!! :))) Our defiant squirrels are always trying to get to our bird feeders by clinging upside down to the wire holding the feeder...
my Father used to sit in the backyard at our house with a garden hose at the ready and spray those little devils!! I don't like calling quilt projects "squirrels" at all!! ya think?;(((

Anyway--good for you working on quilting your MR piece--it is really pretty...
the July 4th embroidery piece is just lovely...I like that border you chose, too...
hugs Julierose

You definitely need those clips. The tree rats dug up my zinnias in the long planter twice but I put river rock on top of the soil and they have left them alone. Good luck on jury duty.

Good boy Smitty! Mine have been trying to catch the fatty in the feeder every morning, but he is much faster. His mate wasn't, so at least there will be one empty nest. My quilter gals have been keeping the fridge filled with rhubarb and asperagus right now. I don't need to garden - they do it.

I hope you were able to have the afternoon free. Your little patriotic quilt looks great! Smitty is looking handsome as ever, with that death ray stare focused on those squirrels. Yes - go get those clips!

HI,
Awesome garden. Love all your quilting and embroidery projects. So pretty. I have a "big foot" too, but its a dog. He likes to lay on my quilt tops when I lay them out to see how they are coming along. His name is Toby. Have a great day!

I laughed so hard at your older post about stitching the appliqué cat’s eye and how it came up on the needle when you stitched into it....Hahaha! That’s the kind of thing that happens to me all the time...Murphy's Law! If I ever turn on my watering hose, it will spray me in the face from the connector every time....makes me want to cuss! Love your blog!! And you are just taunting me with the beautiful Peonies...cause I CANT GROW THEM!! Bonnie C. In GA

I am waiting for sprouts too. If nothing comes up by Sunday I might head out to get starter plants. Weather here alternates between cold and damp and hot and humid. We are lucky if we have a sunny none humid day in-between the swings. We have cicadas here in Maryland now and they bounce or attach to you. Their whirring sound is deafening. We are going to our daughter's home Saturday and we will compare decibels.Apparently the sound was louder than the next door neighbor's lawn mower.